A truly inspiring documentary by about Raquel Acinas and Juan Jose Méndez, two of Spain’s most celebrated, influential and successful para-cyclists. They participated in the London Olympics in 2012. 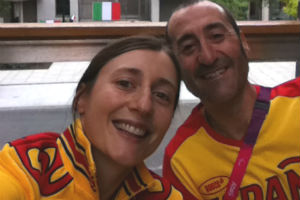 This year the International Paralympic Committee (IPC) introduced a new system of rating disabilities which meant that Juanjo and Raquel had to compete in the same races as athletes with two legs or with prosthetic legs attached to their pedals. This obviously left them at a disadvantage to most of the rest of the entrants and the IPC are now looking at further modifying the categories for the next Paralympic games. In the meantime, denied the possibility of winning medals, Juanjo and Raquel still managed excellent results in their Categories, Juanjo finishing with a fantastic 2nd in his class at the 64 km road race and Raquel with two 4th in class results and four Paralympic Certificates.

Take this opportunity to back the kickstarter project for production of the documentary – last date 29th January 2013… hurry!

Do not miss  the interview with Raquel Acinas and Juan Jose Méndez in Cyclo magazine.