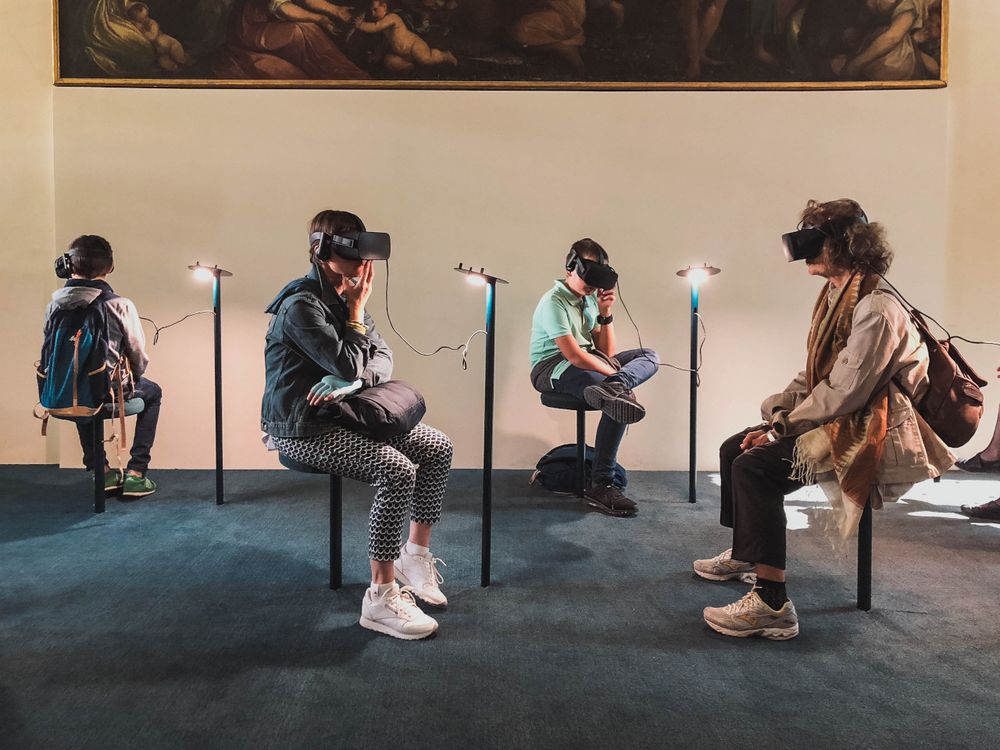 The term Augmented Reality (AR) was first coined in a paper by two researchers, Thomas Caudell and David Mizell of Boeing, titled "Augmented Reality: An Application of Heads-Up Display Technology to Manual Manufacturing Processes". They described a device that they called as HUDset - a heads-up, see-through, head-mounted display that would allow a computer-produced diagram to be superimposed and stabilized on a specific position on a real-world object. The problem that they addressed was the complexity of inevitable manual tasks involved in airplane assembly. The device would help humans superimpose CAD drawings on the real world object and help identify the specific location and nature of the task to be performed. The following diagram illustrates how the HUDset can be used to dynamically mark the position of a drill or rivet hole inside an aircraft fuselage. 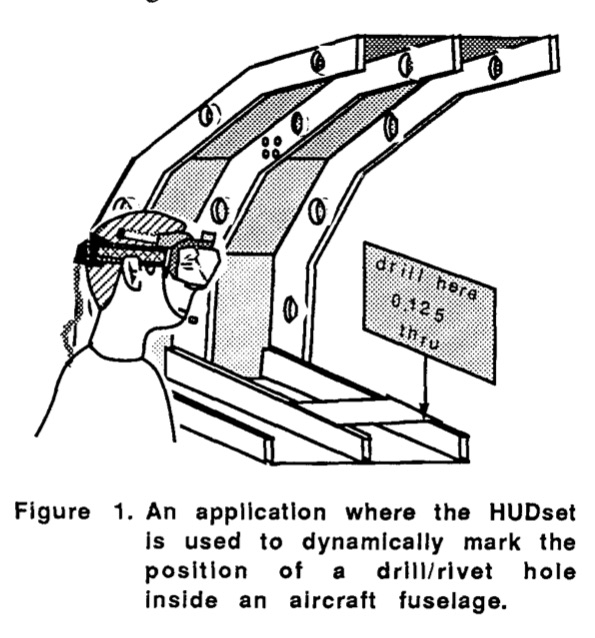 Consumer applications for AR only started attracting attention when devices like Google Glass and low cost smartphones became available to the general public.

The promise and perils of immersive technologies

The consumerization of AR/VR technologies grew rapidly with several products becoming available, from a simple mechanical device that allows the user to use a mobile phone as the display, to specialized devices like the Oculus and other devices from manufacturers like Sony and Google.

An article published in the World Economic Forum titled "Augmented and virtual reality: the promise and peril of immersive technologies" highlighted the growth potential of AR/VR, largely for consumer entertainment such as video games, live entertainment, video entertainment and retail:

According to a recent estimate by Goldman Sachs, AR and VR are expected to grow into a $95 billion market by 2025

On the other hand, the same article also points out the perils of immersive technologies. According to a CNN report,

US teens spend an average of more than seven hours per day on screen media for entertainment, and tweens spend nearly five hours, a new report finds -- and that doesn't include time spent using screens for school and homework

If indeed, AR/VR technologies get adopted by consumers for entertainment, these statistics will start looking worse! We would rather have technologies like AR/VR being used for more productive applications.

We would rather foresee a future for AR/VR technologies that provide much higher value to life. An article in Forbes outlines the following real world applications for AR.

AR can be used to help users navigate complex real world spaces such as airports, retail malls, exhibitions and large workplaces. Gatwick airport's app won awards for it's use of AR.

AR can be used to visualize objects in real world spaces. For example, it can help visualize how a room may look with new furniture, or how an office will look with different workspace layouts. Ikea's Place App lets you virtually ‘place’ furnishings in your space. From sofas and lamps, to rugs and tables, all of the products in IKEA Place are 3D and true to scale so you can make sure it’s just the right size, design and functionality for your room.

AR can be used to allow customers to virtually try products before choosing or buying them. Most spectacle buying websites already provide tools that help select the right model by virtual trials. However, without technologies like AR/VR, this is more difficult for more complex products. Chrono24 introduced an AR app for trying out high end watches using AR.

One of the most useful applications of AR is for healthcare. The University of Maryland's Blended Reality Center introduced Augmentarium, an augmented reality application for surgery.

In envisioned application, a surgeon using an AR headset such as Microsoft’s HoloLens would be able to see digital images and other data directly overlaid on her field of view. In such a scenario, the headset might display a hovering echocardiogram with vital signs and data on the characteristics of the patient’s aneurysm directly above the surgical field. The surgeon needn’t look away from the patient to multiple different displays to gather and interpret this information (ref) 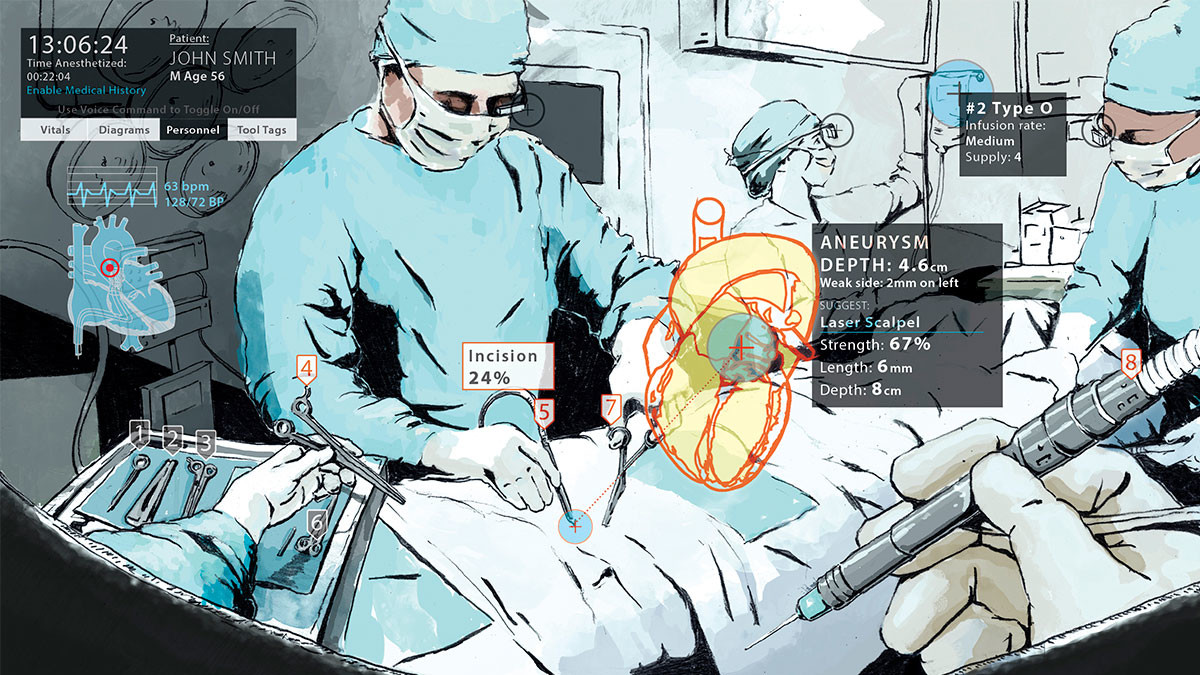 And of course, the original application for which AR was first coined - industrial applications! There are multiple applications in manufacturing for augmented reality, such as:

Commercial use cases will account for nearly half of all AR/VR spending in 2020, led by training ($2.6 billion) and industrial maintenance ($914 million) use cases. Consumer spending will be led by two large use cases: VR games ($3.3 billion) and VR feature viewing ($1.4 billion). However, consumer spending will only account for a little over one third of all AR/VR spending in 2020 with public sector use cases making up the balance. The AR/VR use cases that are forecast to see the fastest growth in spending over the 2019-2023 forecast period are lab and field (post secondary) (190.1% CAGR), lab and field (K-12) (168.7% CAGR), and onsite assembly and safety (129.5% CAGR). Seven other use cases will also have five-year CAGRs greater the 100%. Training, with a 61.8% CAGR, is forecast to become the largest use case in terms of spending in 2023

Do you have plans of using AR/VR in your organization? Do you have any ideas you would like to share? Please do write to us in comments below or get in touch!

Apparently there are no posts at the moment, check again later.