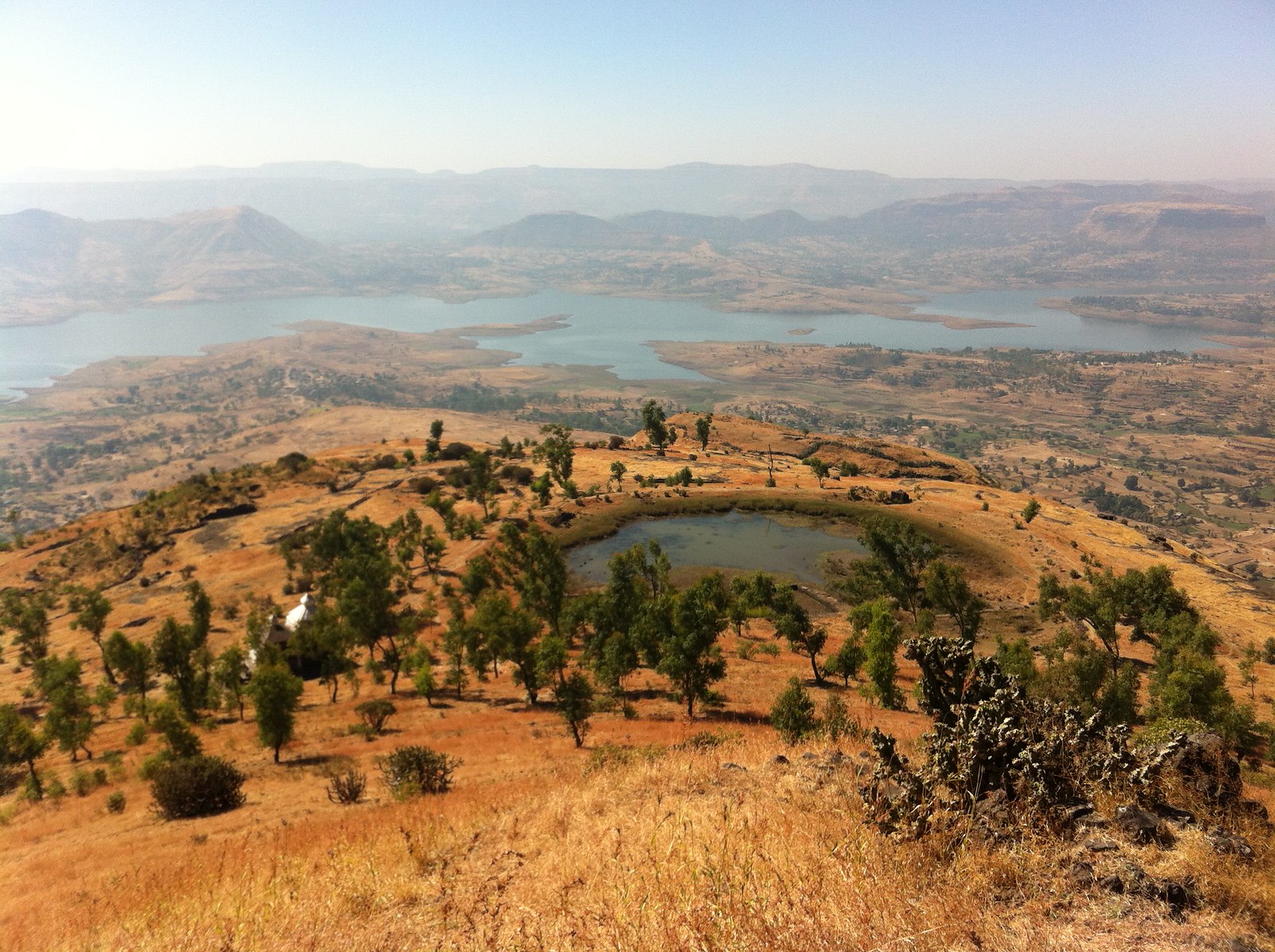 What better way to spend a weekend than trek up one of the several forts in the Sahyadris!

This weekend we decided to go and climb Hadsar fort. As it turned out, everyone else dropped out and it was only two of us – Sameer and myself. So we decided to take the opportunity to ride our respective bikes – Royal Enfield Bullets.

Fort Hadsar, also known as Parvatgad, was constructed during the Satvaahanas and was heavily inhabited during that period. It is located on the outskirts of Ahmednagar (known commonly as Nagar) to control the trade route passing through Naneghat. Documentary evidences show that Hadsar was one of the forts exchanged in the 1637 treaty between Shahaji Raje and the Mughals. In 1818 the British forces conquered Junnar and the forts in this region. Like most other cases, main features of this fort were demolished by the British during their attack and later (ref)

We started at 4 am and headed down NH 222 via Thane, Kalyan and Murbad. We did not anticipate how cold it would be! We were freezing, and my shoulders started to shiver. We managed to find a tea shop open at around 5:30 am, and downed several hot cups of tea. We then kept our backpacks in front to shield us from the cold wind, and then it was much better. Riding in the dawn towards Hadsar fort

Dawn hit just as we started climbing up towards Malshej Ghat. The ride there on was a dream come true – great road surface, meandering roads through stunning mountains, cool fresh air and a sturdy bike – what more can one ask for! Bikes in the mountains See the video of the ride to see the dirt track road that leads us to Kothiwade village.

The ride itself was so satisfying, we could not wait to begin the trek. We parked our bikes at Kothiwade village (see map above). Dog basks in the sun at Kothiwade

We managed to convince a few village kids to help us find the way up to the fort. We decided to try the Eastern Route first. The climb up Hadsar from the east Enjoying the view from the eastern corner of Hadsar fort

See the video of our climb, and notice how the kids manage to climb up the steep rock face like monkeys!

The final rock climb proved too risky for us, and we had not prepared ourselves. Ideally we should have carried some ropes to harness and then it would have been fun! Maybe next time. We then came back down, and passed a natural cave in the rocks that the kids knew of Cooling in the cave

We then walked around to the south-west corner of the fort, but not before we paid our respects at the Shiva temple on the way. Approaching temple on south-east of Hadsar Temple on south-east of Hadsar fort

We then took the Southern Route up to the fort through the gully between the hill at the south-west end of the fort (see map above). This climb was relatively easy, with a short easy rock climb at the end to climb on to the rampart. Pond and temple at Hadsar fort

One you pass through the arched gate of the fort, one arrives at a temple with a pond in front and a hill behind it. The water in the pond is not very clean and the kids advised us against drinking it. They claimed they knew another water cistern that had potable water.

The kids played around the pond while I and Sameer climbed up the hill for a better view. The views from the top were fabulous. Do not miss the video below that gives a 360 degree view of the entire countryside surrounding the fort.

We then visited the caves that lie a few meters away from the pond. Relaxing in cave at Hadsar fort We finally ran out of our drinking water, and the kids took us to the water cistern that they claimed, contained potable water Though the water did not look very inviting with weeds floating around, the kids were quite confident and drank it. We did not have much choice, so ended up filling it in our bottles. Note: It is now 24 hours after the trek and we are still ok 🙂

Then it was time to head back. We climbed down from the main Western Route where there is another identical arched entrance. Resting a while at Hadsar fort

But then came the most exciting part of the trek. As we had parked our bikes at Kothiwade, we would have to climb down the Western route, then circle back all the way to the east which included another short climb up the ridge to the north. Instead, the kids claimed that we could walk along the rock wall on the western face of the fort.

See the video that shows this harrowing route that is explicitly avoidable in monsoon.

We somehow reached the north end of the fort and climbed down to the east back to Kothiwade. We say a final good bye to the kids after giving them a token gift of appreciation that they are ecstatic to receive. A final halt on the way back for much needed lunch, and we head back to Mumbai to reach late afternoon. A wonderful experience highly advisable for anyone who loves adventure!