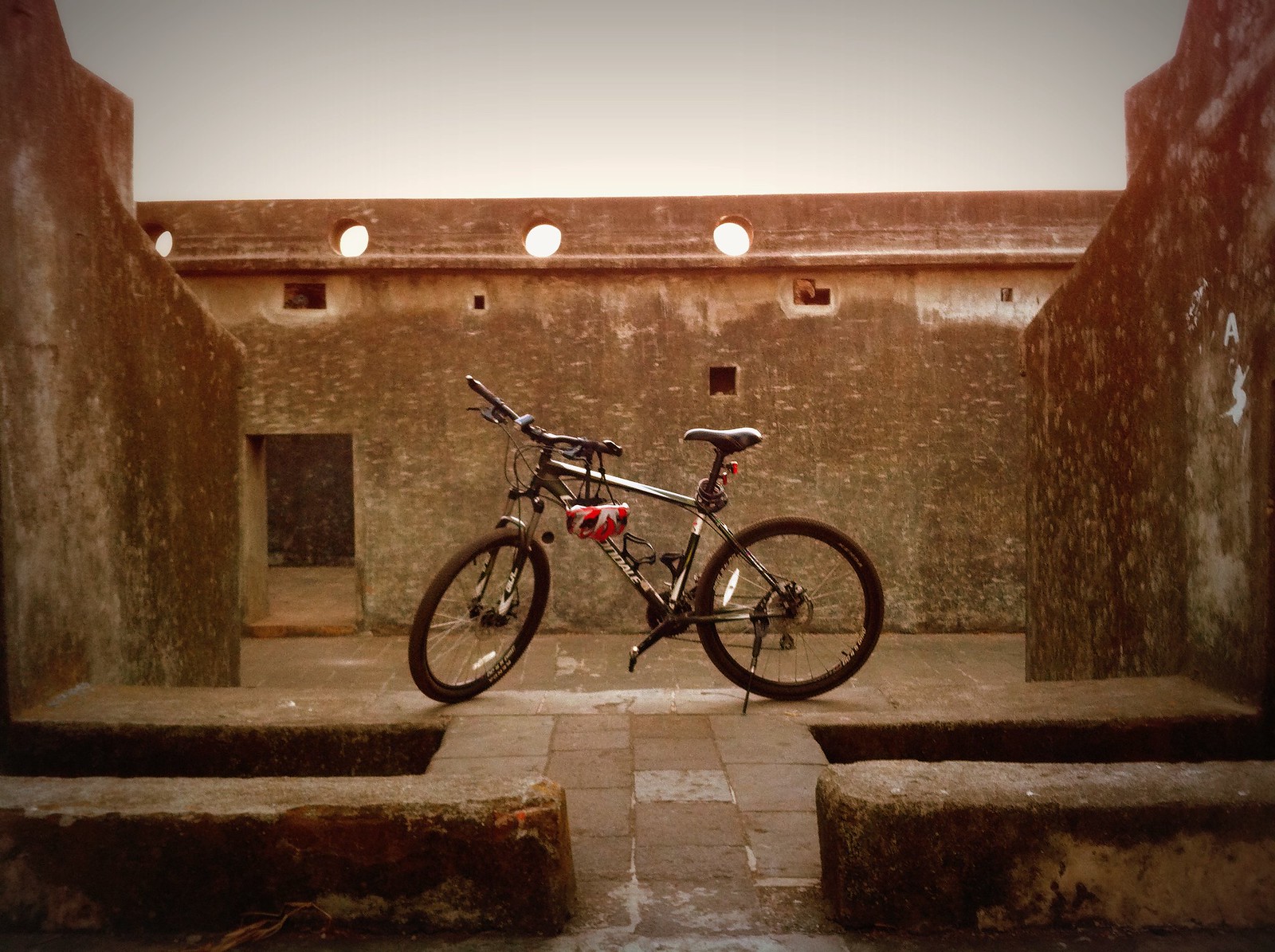 As a follow up of my new year resolution to cycle to all the forts in and around Mumbai, the second fort I tackle is Sewri Fort.

Up to the eighteenth century, Mumbai consisted of several small islands. In 1661, seven of these islands were ceded by the Portuguese to the British as part of the dowry of Charles II of England. The harbour proved eminently apposite, and the British planned to shift base from Surat to Mumbai. The Siddis, who were of African descent and noted for their navies, had allied themselves with the Mughals. The British, under the East India Company and the Mughals were constantly waged war on each other. As allies of the Mughals, the Siddis also declared the British as enemies.

Faced with relentless attacks by the Siddis in 1672, several fortifications were constructed in Mumbai, and in 1680 the Sewri fort was complete. It stood on the island of Parel, on a hill overlooking the eastern seaboard and Indian mainland. It had a garrison of 50 sepoys and was managed by a subedar. It was also armed with eight to ten cannons.

In 1689, the Siddi general, Yadi Sakat, with an army of 20,000 men, invaded Mumbai. The fleet first captured the Sewri fort, then the Mazagon Fort, before sacking the town of Mahim. The fort was also later involved in a battle that repelled a Portuguese attack in 1772. After the decline of the regional powers, the fort was subsequently used to house prisoners. It was later converted as a Bombay Port Trust godown.

The route to reach the fort is along the port trust road that one can ride via Wadala. If you are not cycling there, then the nearest location is Sewri station, and one can even walk the couple of kilometers to the fort towards the shore.

I left at 5:30 am from Andheri and cycled via Western Express Highway till Bandra and then turned left at Kalanagar to ride through Dharavi. Then left at King Circle turn towards VJTI, and one reaches the bridge to cross over to the east, where one can approach the port side road that goes under the new Chembur link road. It was still dark when I reached the fort at around 6:30 am. So I waited outside near the dargah looking out into the sea. The mangroves look magical in this light In about 30 minutes, there was sufficient light and I ventured inside the fort through the main entrance to Sewri fort There are two concentric stone fortifications that surround the fort. The outside wall is in pretty bad shape, but the inside wall is now completely restored, though not very well. The entrance is an arched doorway that leads to a small dungeon-like room In this room, at right angles to the main door is another arched door that leads into the main courtyard inside the fort On the left of this courtyard are two large halls with curved roofs that are a very distinctive visual feature of this fort. On the right are two other halls with no roof The halls to the right are roofless and bare, with a small stairway that leads into them At the center of the courtyard on the left are steps that lead up to the corridor in between the two halls with curved roofs. The corridor leads to the top of another bastion on the far side Bastion at far end of the corridor between the two halls Climbing up the steps of the corridor, one can enter the two halls on either side using steps that lead down into them Inside the halls there is almost no light. Other than the door, there is just one porthole at the top and the light struggles to get in Back in the courtyard, there a flight of stairs that leads up above the entrance, where a bastion overlooks the dargah that lies right next to the fort From the top of the stairs, one can climb onto the wall between the courtyard and the roofless halls. This is the best place to view the mangroves and mudflats. These mudflats are home to thousands of migrating flamingos, and they form a pink carpet over the mudflats. I wish I had a better camera than my iphone to zoom and take a good shot of the flamingos While I sit there enjoying the view of the flamingos, a pair of sparrows come and join me to enjoy the sunrise The sunrise over the sea is a classic view. I am rewarded with a pigeon that flies across just as I take a shot of the sunrise It is now 8 am and time to conclude my visit. I climb back down from the wall and head towards the entrance. I notice some inscriptions on the keystone above the arched doorway. Wonder what they signify As I exit the fort and climb down towards the road, I notice the board of the Archeological Society of India. Though they have renovated the ruined fort, the quality of reconstruction leaves much to be desired. Instead of using stone, they have used cement and concrete and spoiled the beauty of the fort. Plus there is no cleanliness. Nobody seems to be keeping the place clean. One can see wrappers of all sorts of food items strewn around. This is such a disease, wonder when visitors will learn to respect the place they visit

I cycle back just in time to avoid the rush hour traffic, and reach home satisfied at one more expedition to a fort in Mumbai. Thanks to my cycling, I’m beginning to enjoy places in Mumbai that I never saw for the 40 plus years that I’ve been living here.