When it gets to Saturday evening, I usually start feeling the itch to figure out a route to ride on Sunday. Last night was no different, and with the current theme of riding to all the forts in and around Mumbai, I looked up Belapur Fort.

The location of Belapur Fort really surprised me – for it lies at the junction of Palm Beach Road and Uran Road – a place I have driven by several times, and also cycled to before. I did not know that a fort lies hidden among the trees there.

As you can see from the map above, there are two locations that are supposed to contain forts in Belapur. (In fact there were even more locations that are now lost and destroyed.) The first location is at the end of the Belapur Island near Divale village in Sector 14 of Belapur. The second location is near the junction of Uran road and Palm beach road.

The fort has an interesting history:

In 1733, the Marathas, led by Chimnaji Appa, wrested control of the fort from the Portuguese. He had made a vow that if it were to be successfully recaptured from the Portuguese, he would place a garland of beli leaves in a nearby Amruthaishwar temple, and after the victory the fort was christened as Belapur Fort. The Marathas ruled the area until 23 June 1817, when it was captured by Captain Charles Gray of the British East India Company. The British partially destroyed the fort under their policy of razing any Maratha stronghold in the area

During its active days, the fort stationed four companies each of 180 men, and 14 guns ranging from 4–12 pounds (2–5 kg) in weight. An underground tunnel is also supposed to exist, which many locals believe connects it to Gharapuri Island, the site of the Elephanta Caves

I was eager to see the fort, and left at 5:30 am from Andheri, and cycled via Airoli to Thane-Belapur Road and then turned right towards Palm Beach Road at Nerul. Once I joined Palm Beach Road, I cycled till Belapur and first visited the Divale village location.

But when I reached the village, the villagers who are all fishermen told me that there was no more any fort there, and only a Mosque remains at the top of a small hillock. 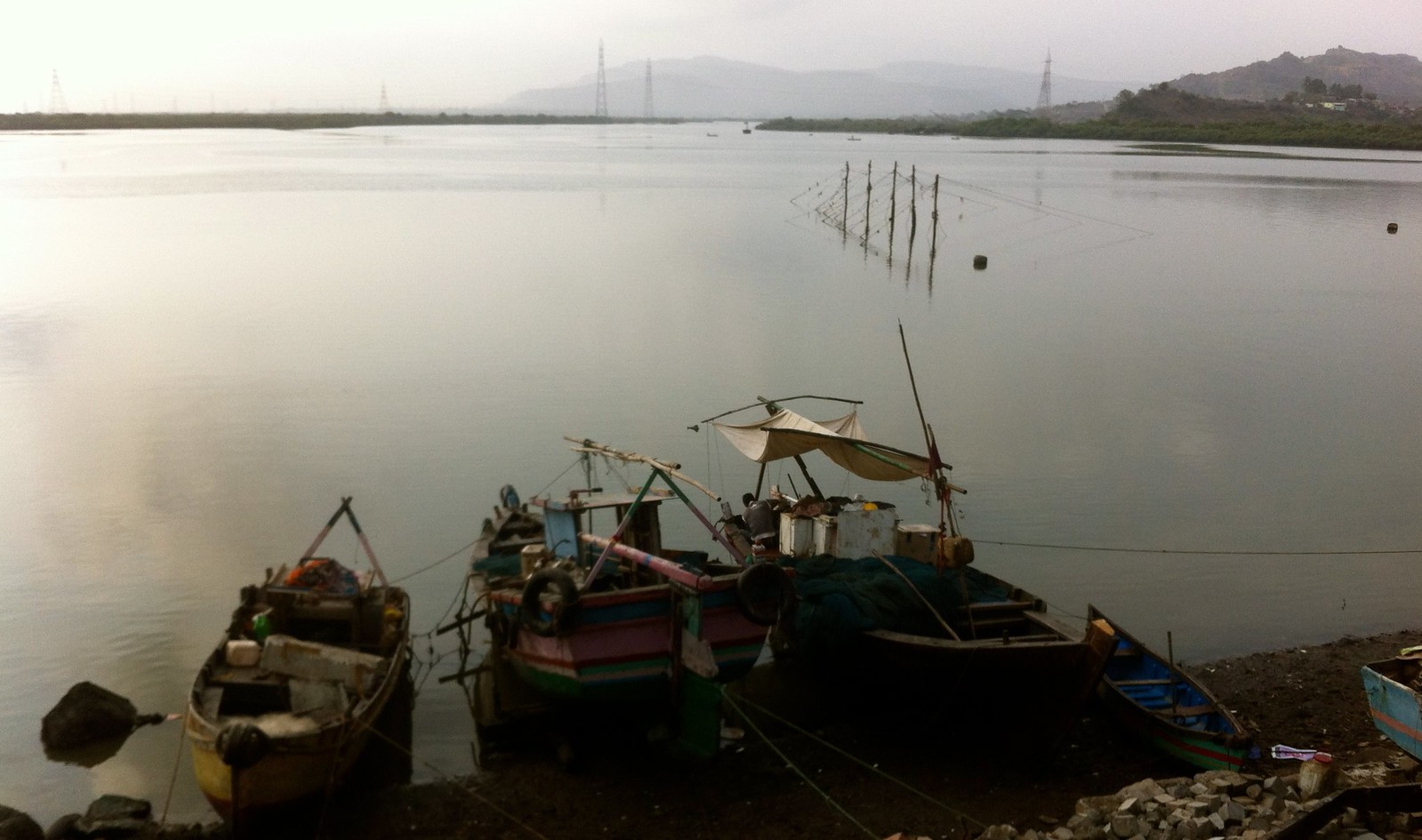 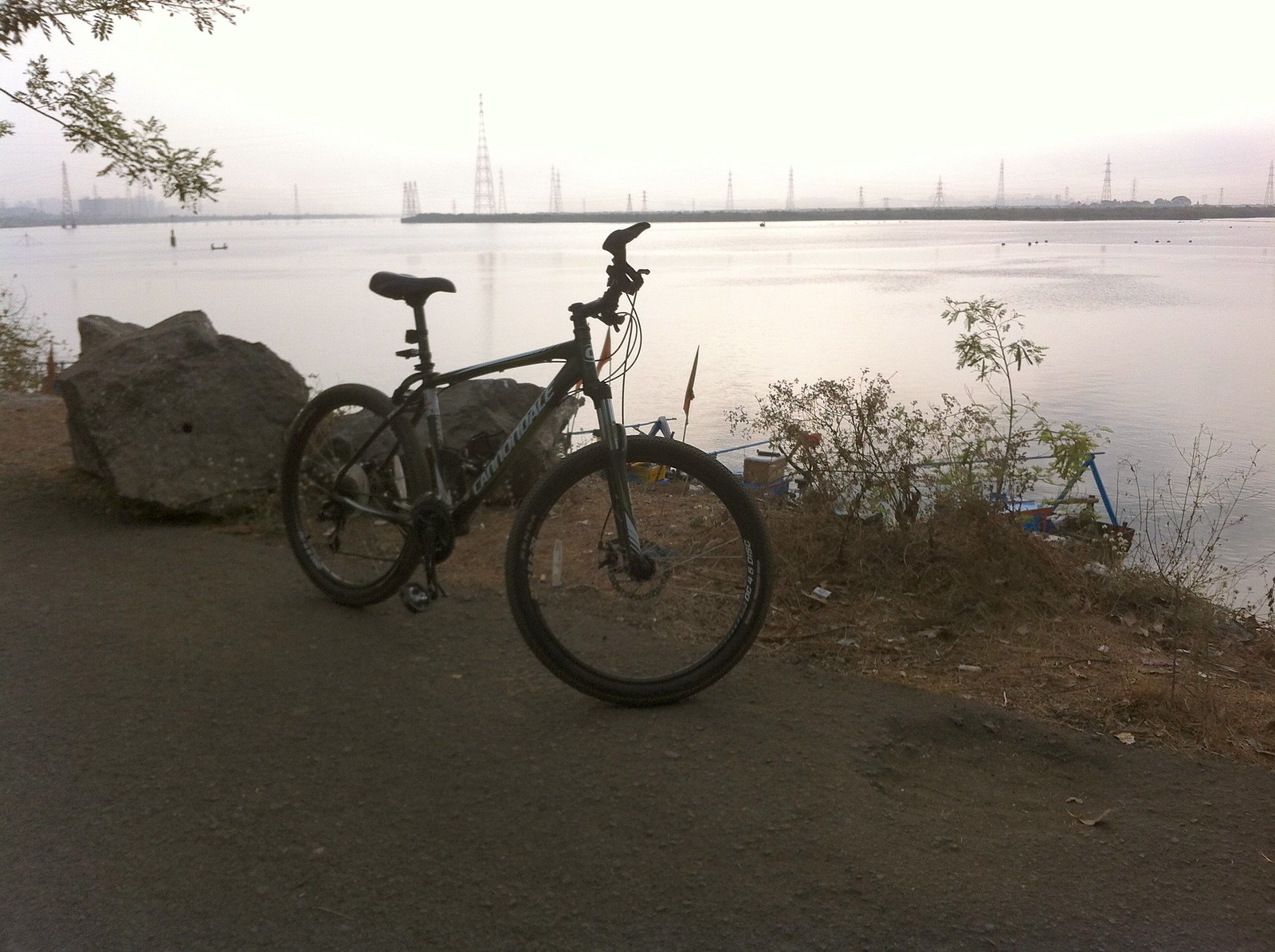 I parked my cycle at one point and talked to the fishermen to inquire about the fort. They said that there was no fort any more and a Hindu cemetery and a small garden has taken its place 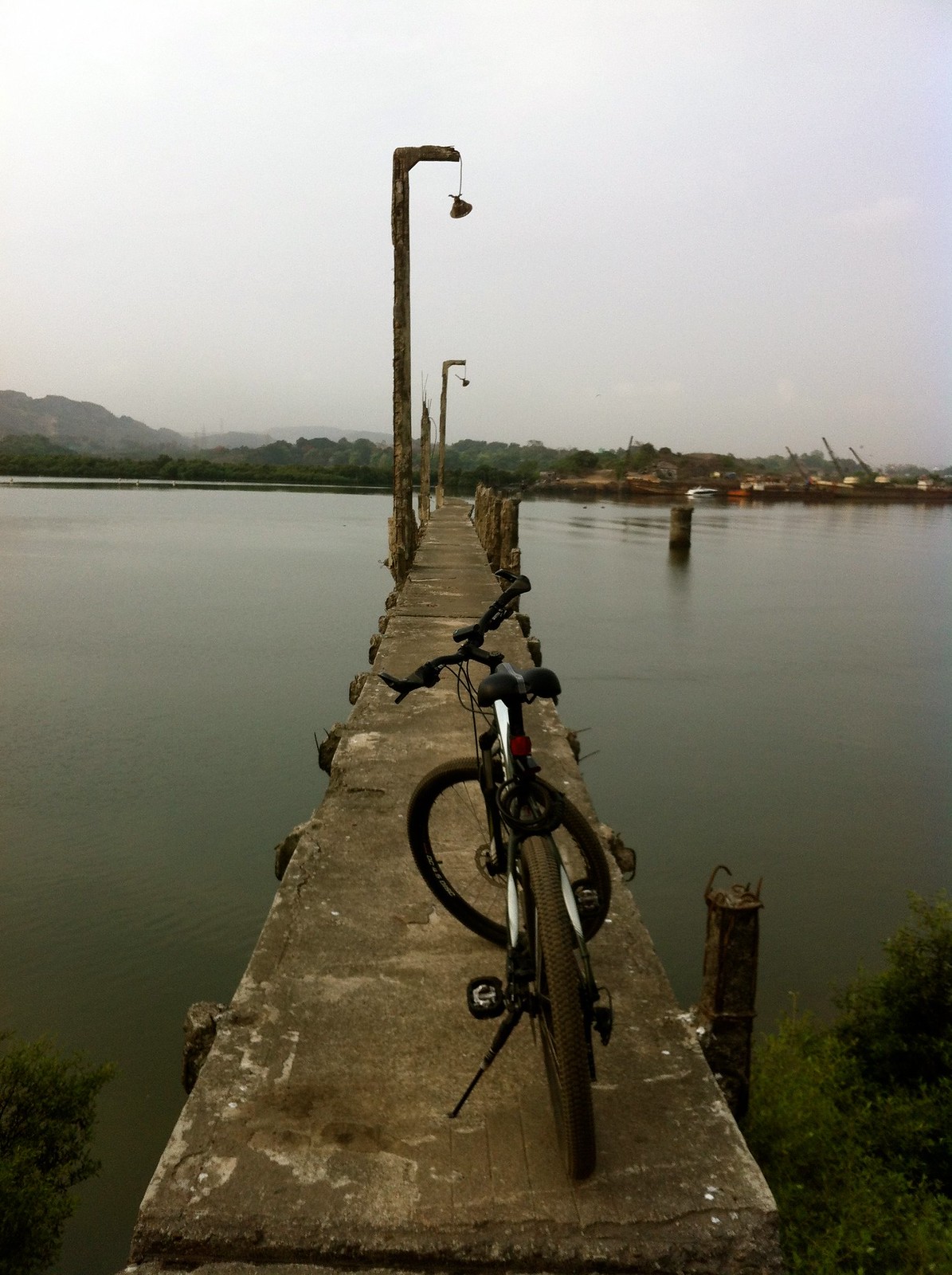 A narrow pier juts out into the creek from the cemetery 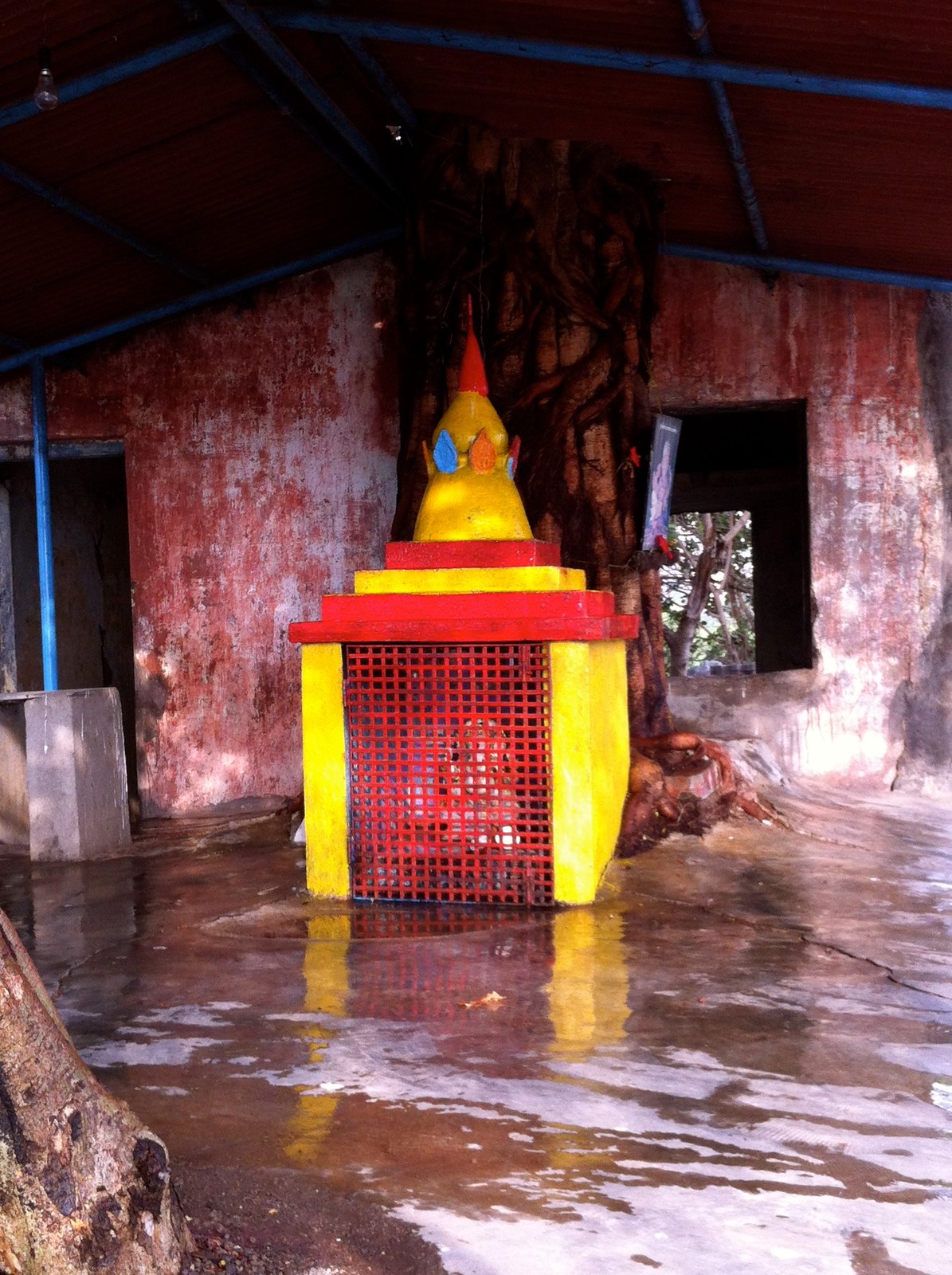 In the garden next to the cemetery, there is a small temple that stands out with its brightly painted colors. But Ganapati inside seems to be caged in! 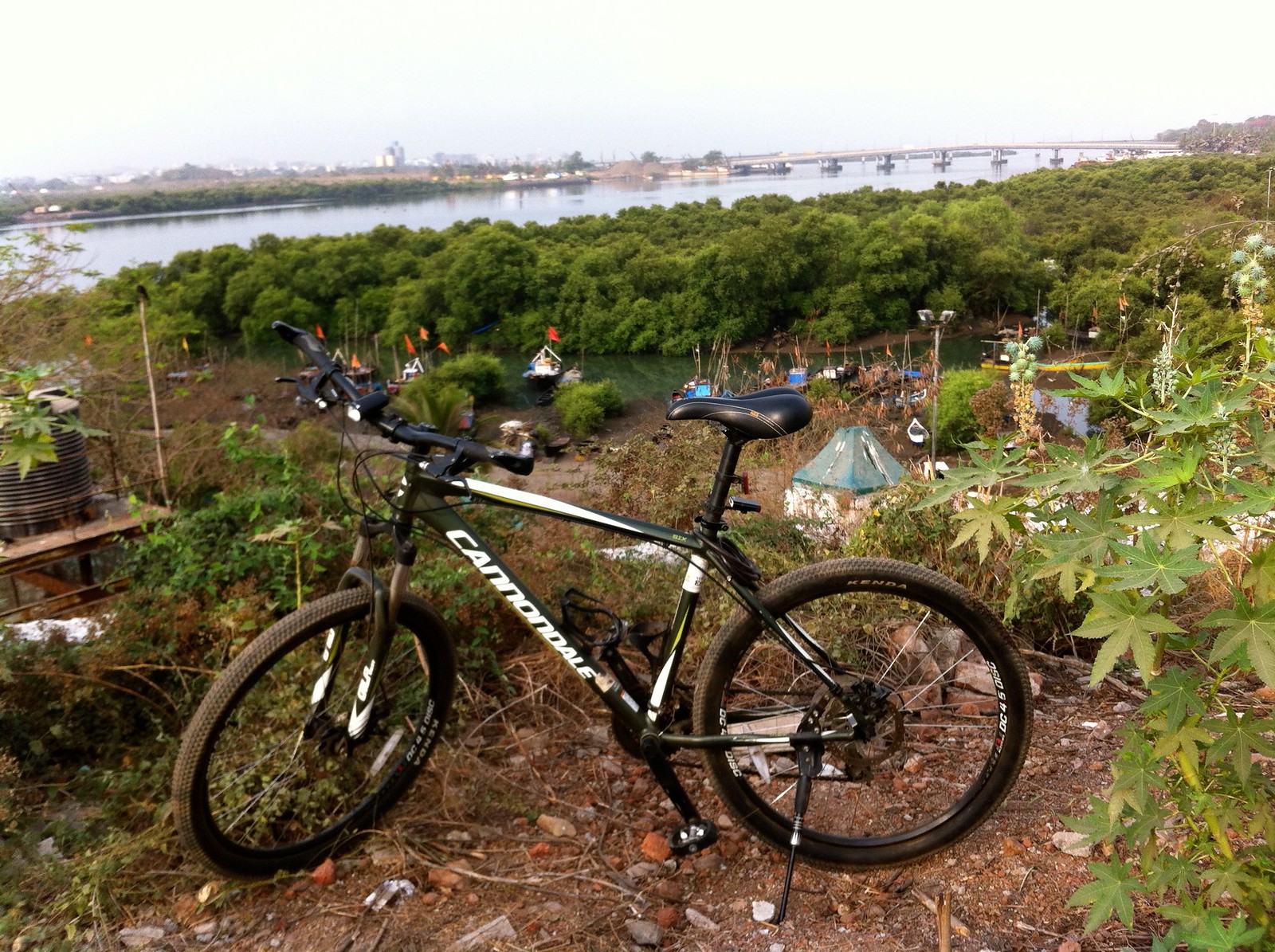 I then climbed up the hillock on with the Mosque but was disappointed that it had been reconstructed with modern materials. So I was left to merely enjoy the view of the creek from there 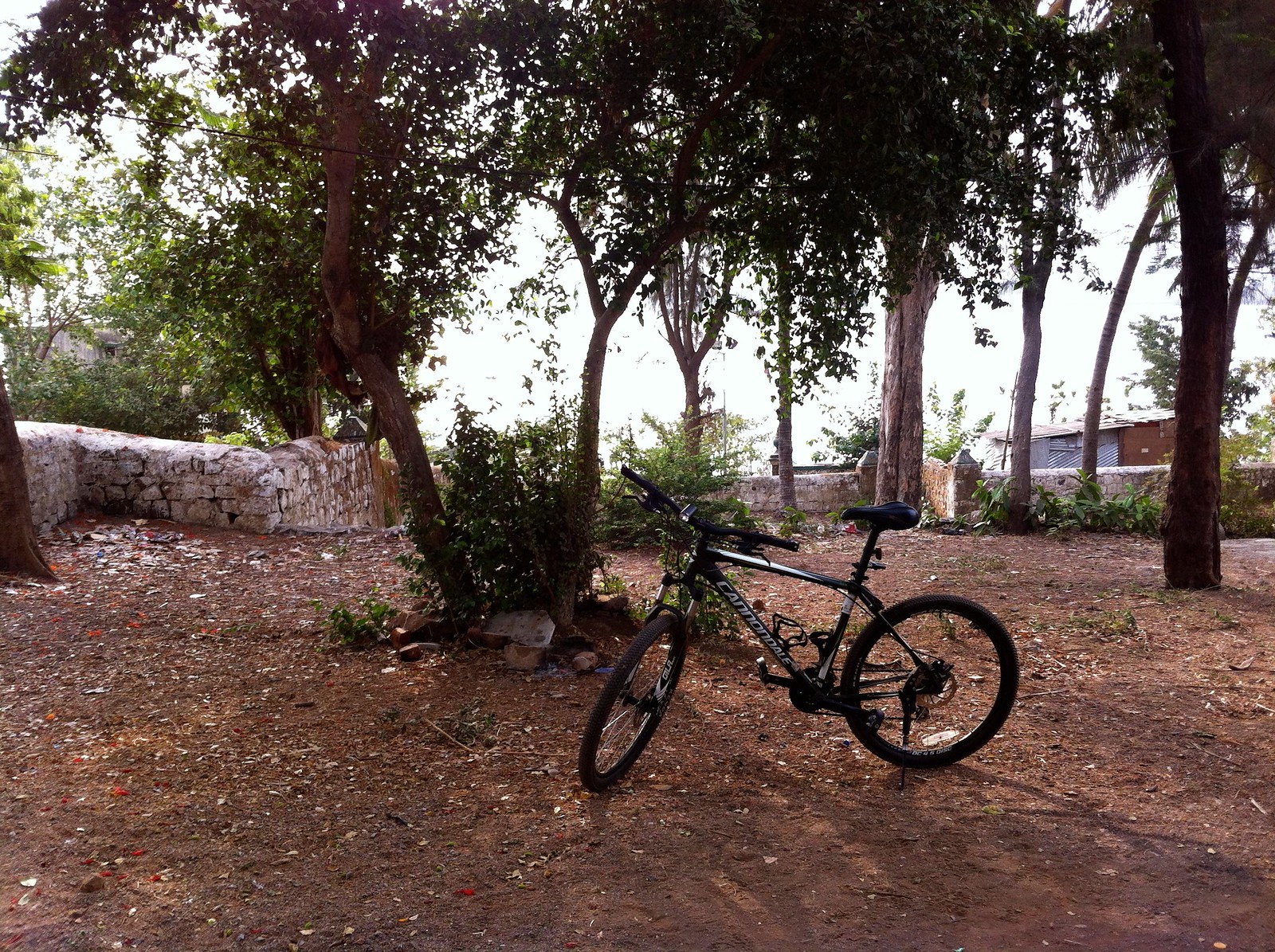 I then head off to the junction of Uran Road and Palm Beach Road to investigate the other location of Belapur Fort. The first part of the fort lies on a traffic island at the junction. There is a small garden full of thick trees and this watch tower is hidden inside. I have passed this traffic island several times, but did not know about this hidden treasure. 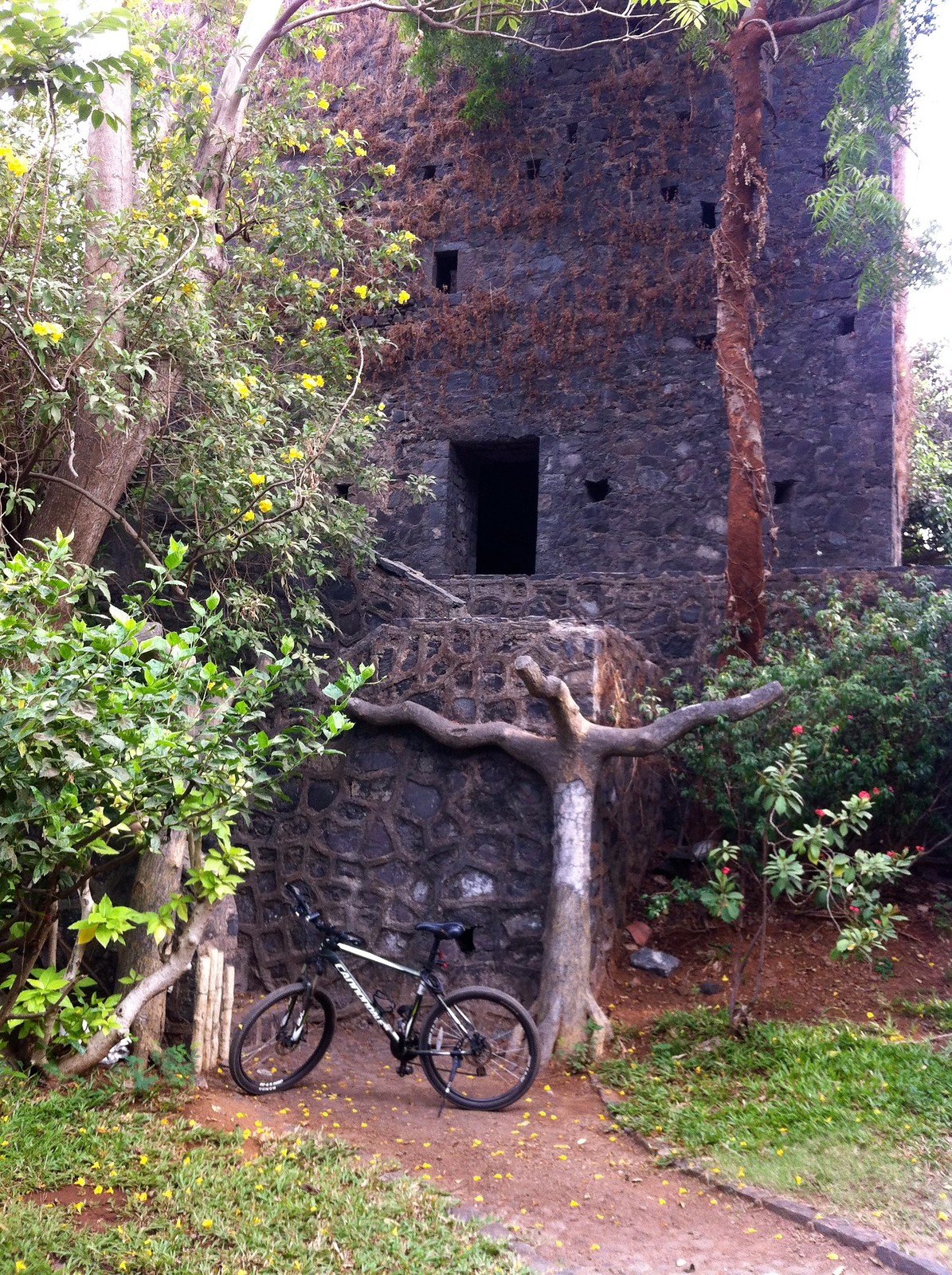 A watch tower lies at the lowest point of the fort next to the river, which is now preserved on a traffic island with a small garden around it. The bottom of the watch tower has an enclosed room that was used as a prison.

I walked inside and around the watch tower. It seems to have been suitably restored and is now well maintained. 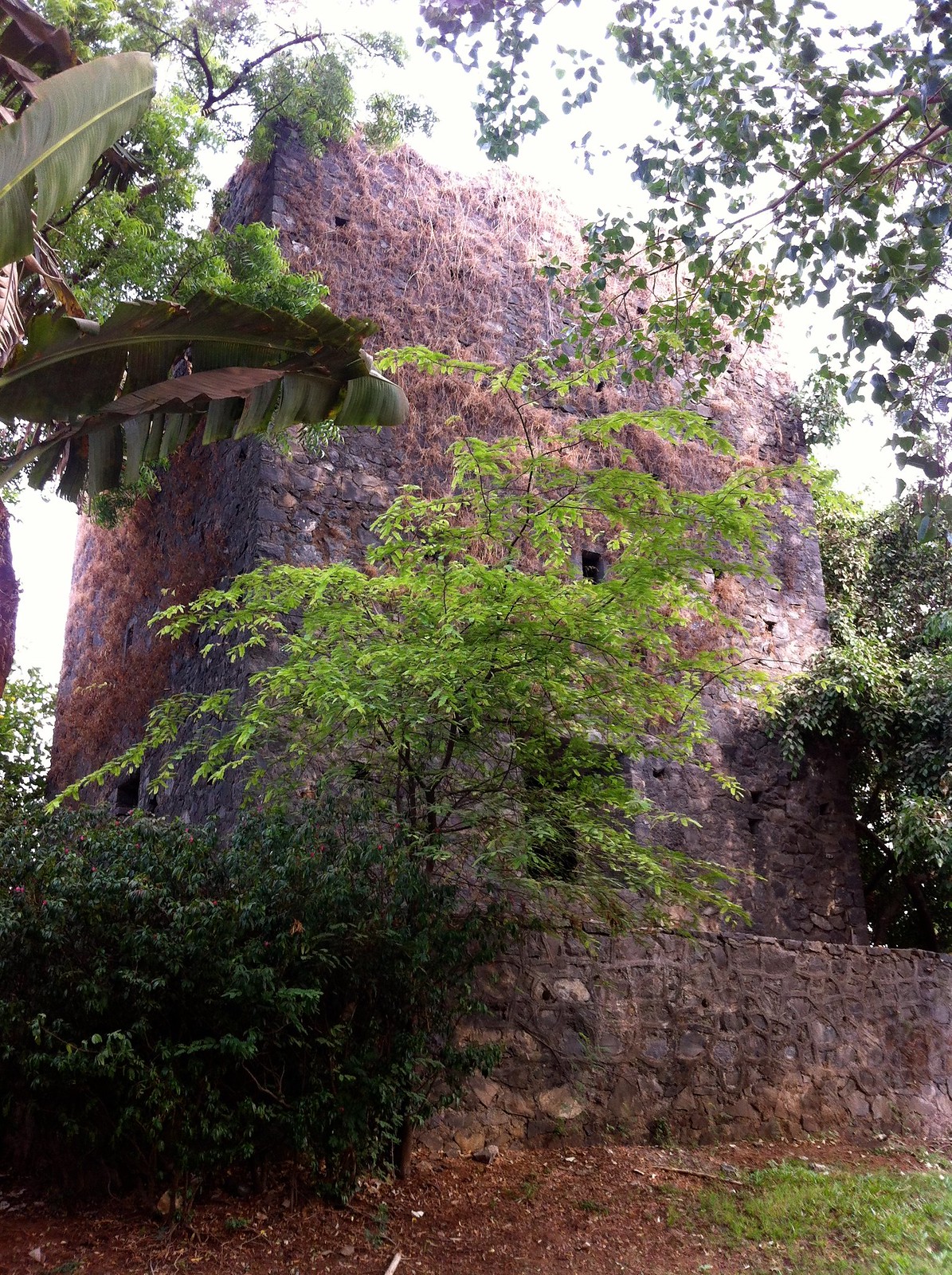 A view of the watch tower from behind 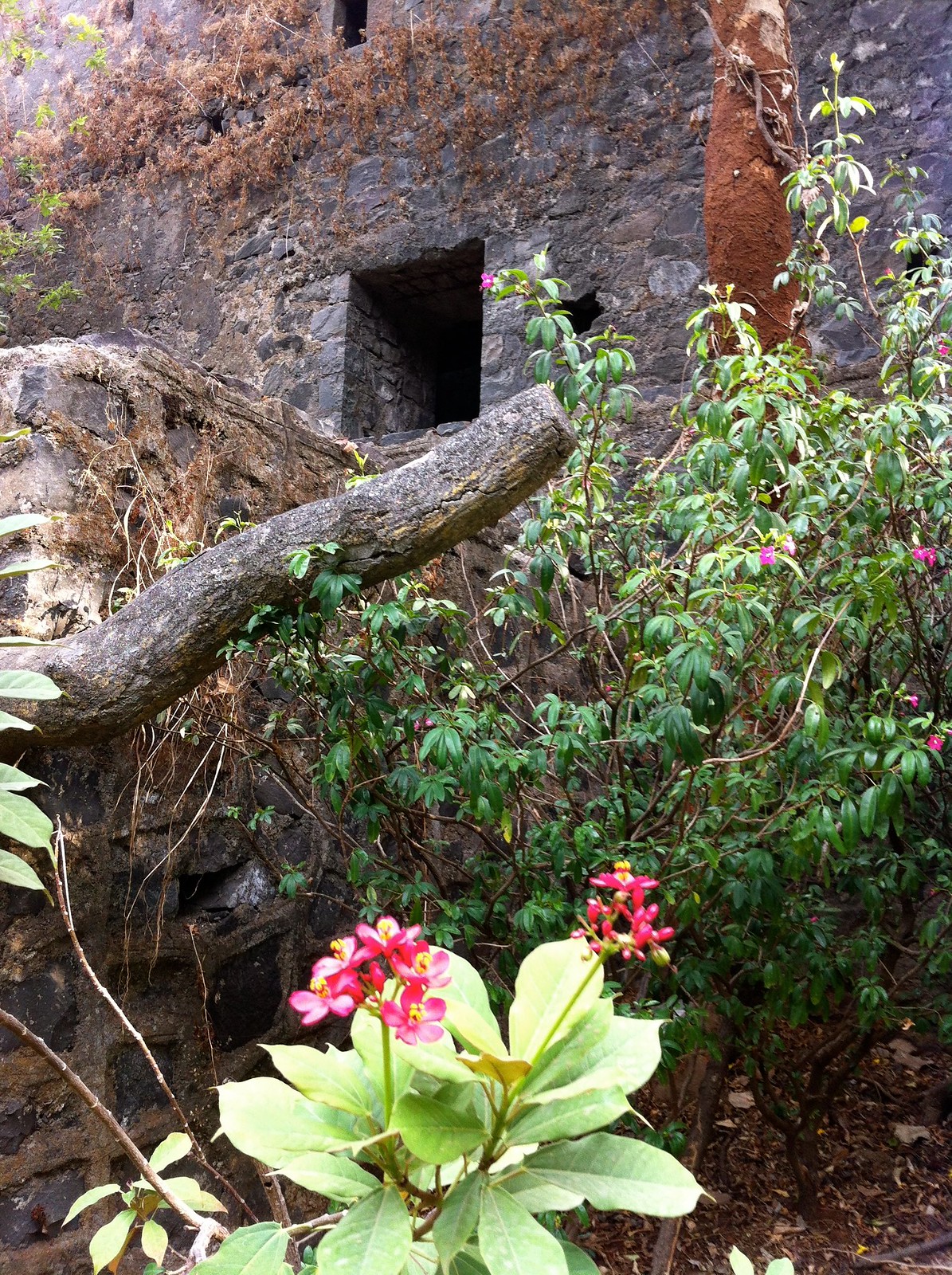 This is the view from the pavement around the traffic island. As you can see, the tower is well camouflaged by the trees 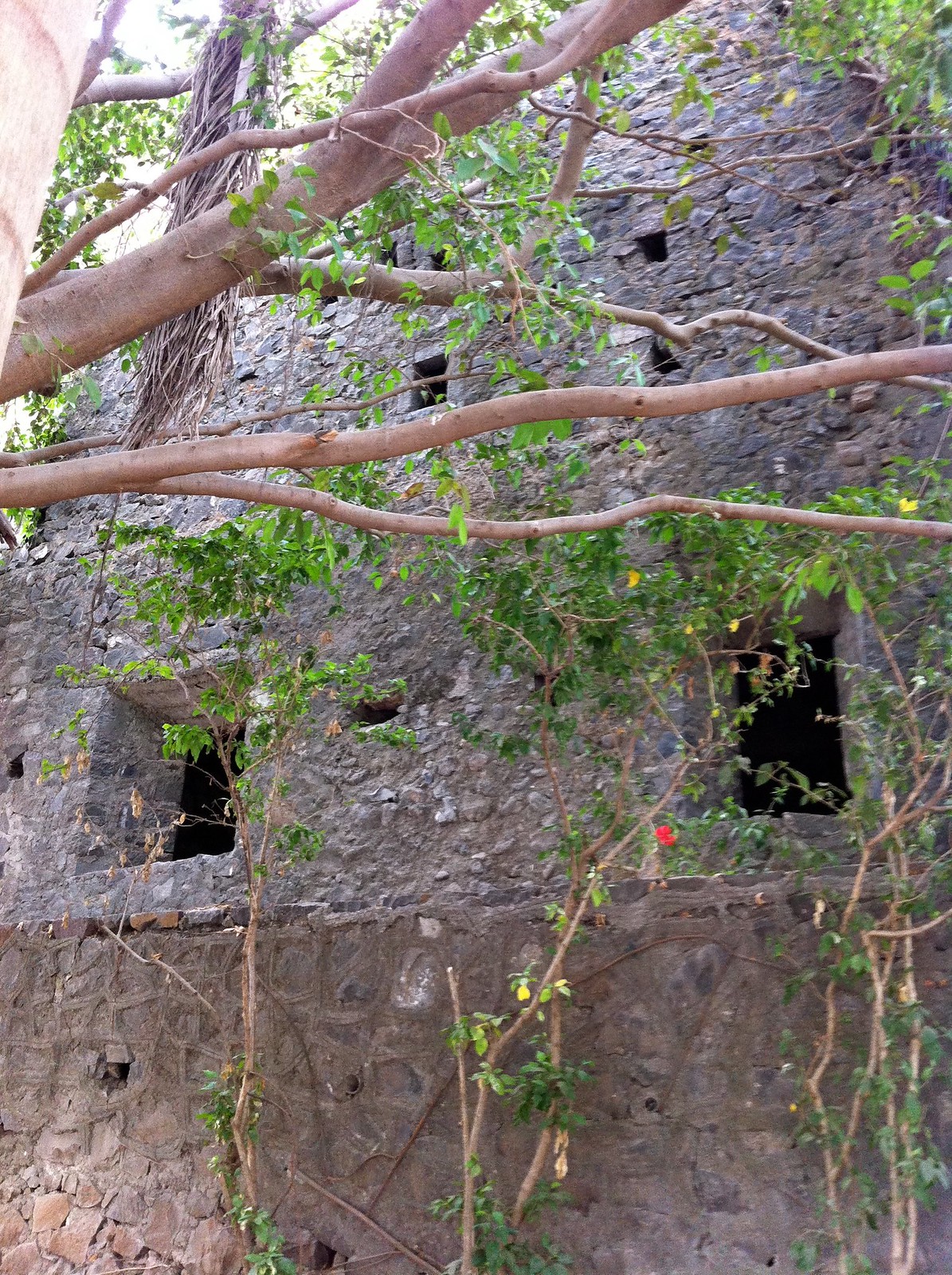 I then went looking for any other remaining part of the fort. Behind the traffic island, a small road leads inside a residential area that is thickly wooded. Here, a CIDCO guest house now occupies what used to be the fort’s interior. There are other residential building here too.

The only remaining vestige of the fort is a bastion that lies at the top of a small hill. There is no proper path to climb the hill and one has to find one’s way through thorny bushes. 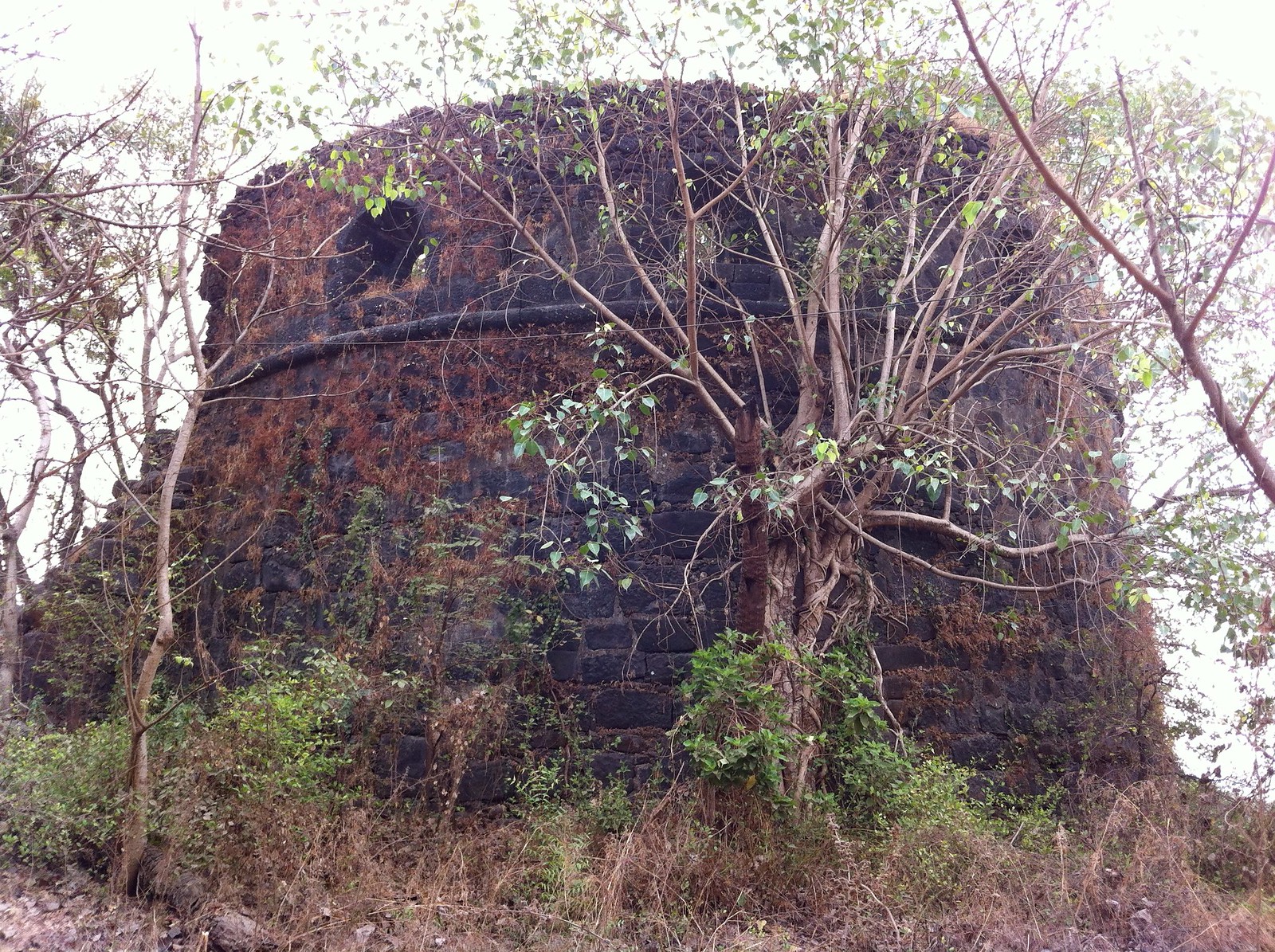 The bastion is thankfully still standing, though it is severely damaged. 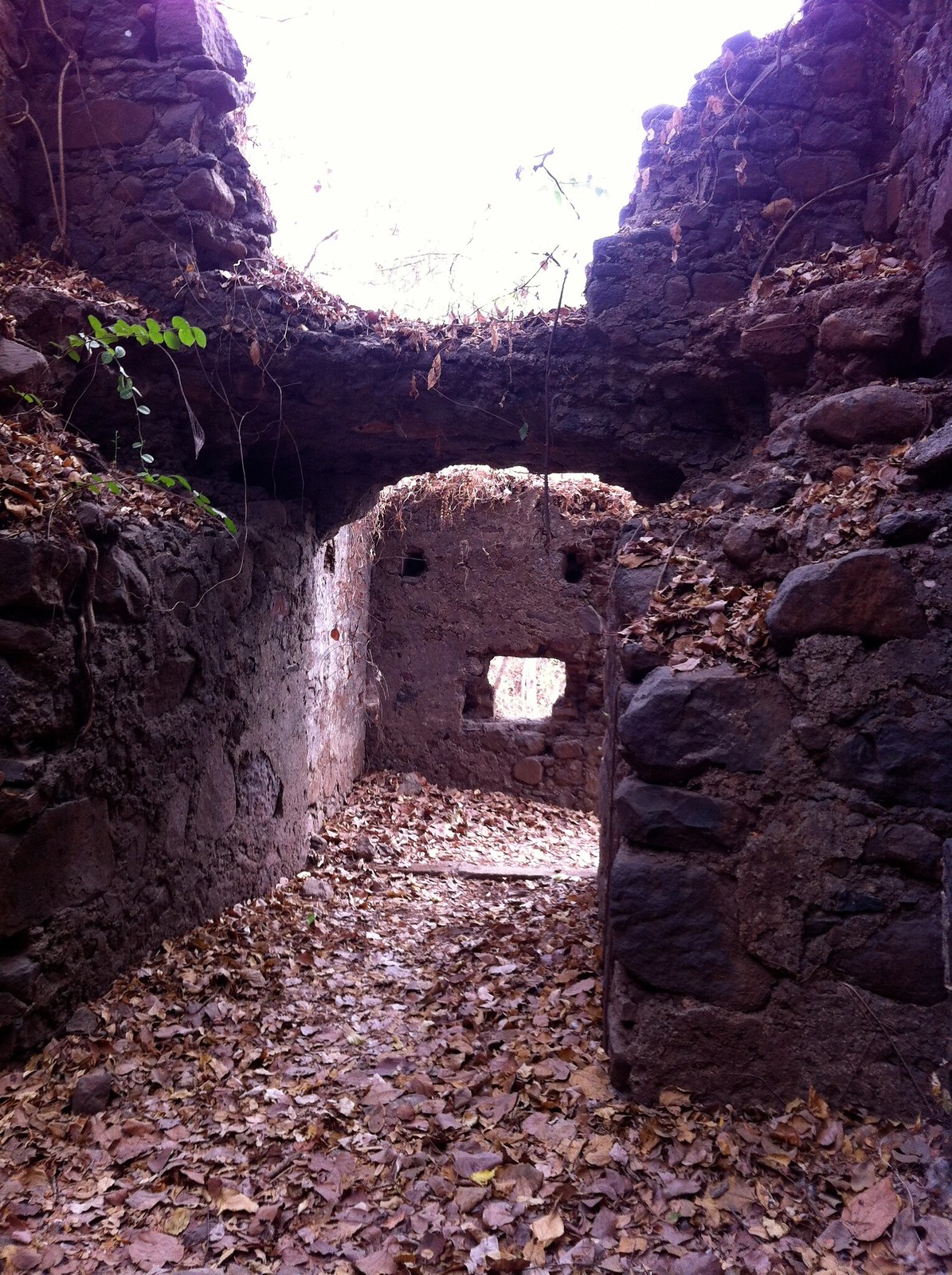 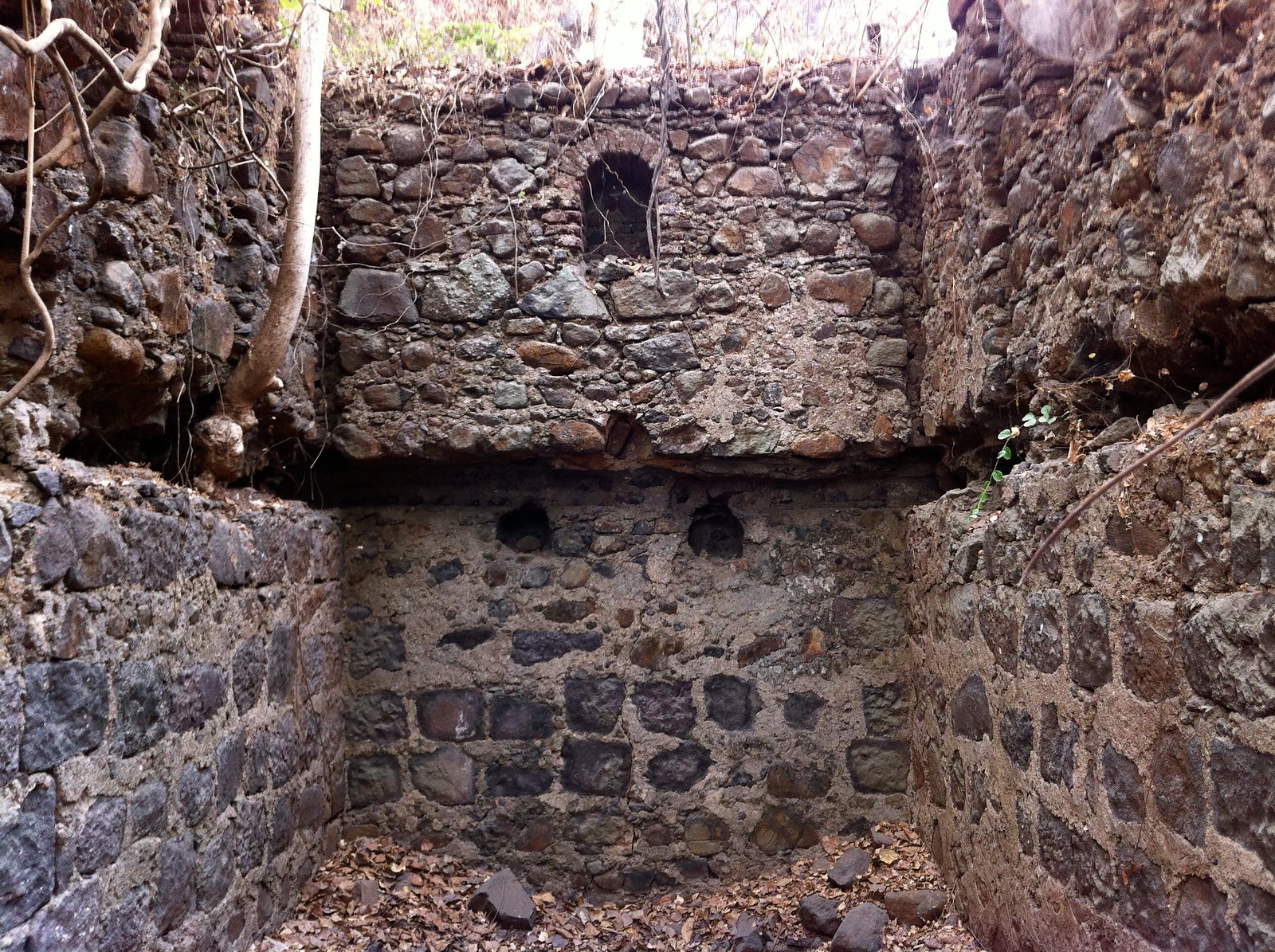 The rectangular room in the bastion seems to have a long slot and some small nooks in the walls that are not really windows. Wonder what these were used for. 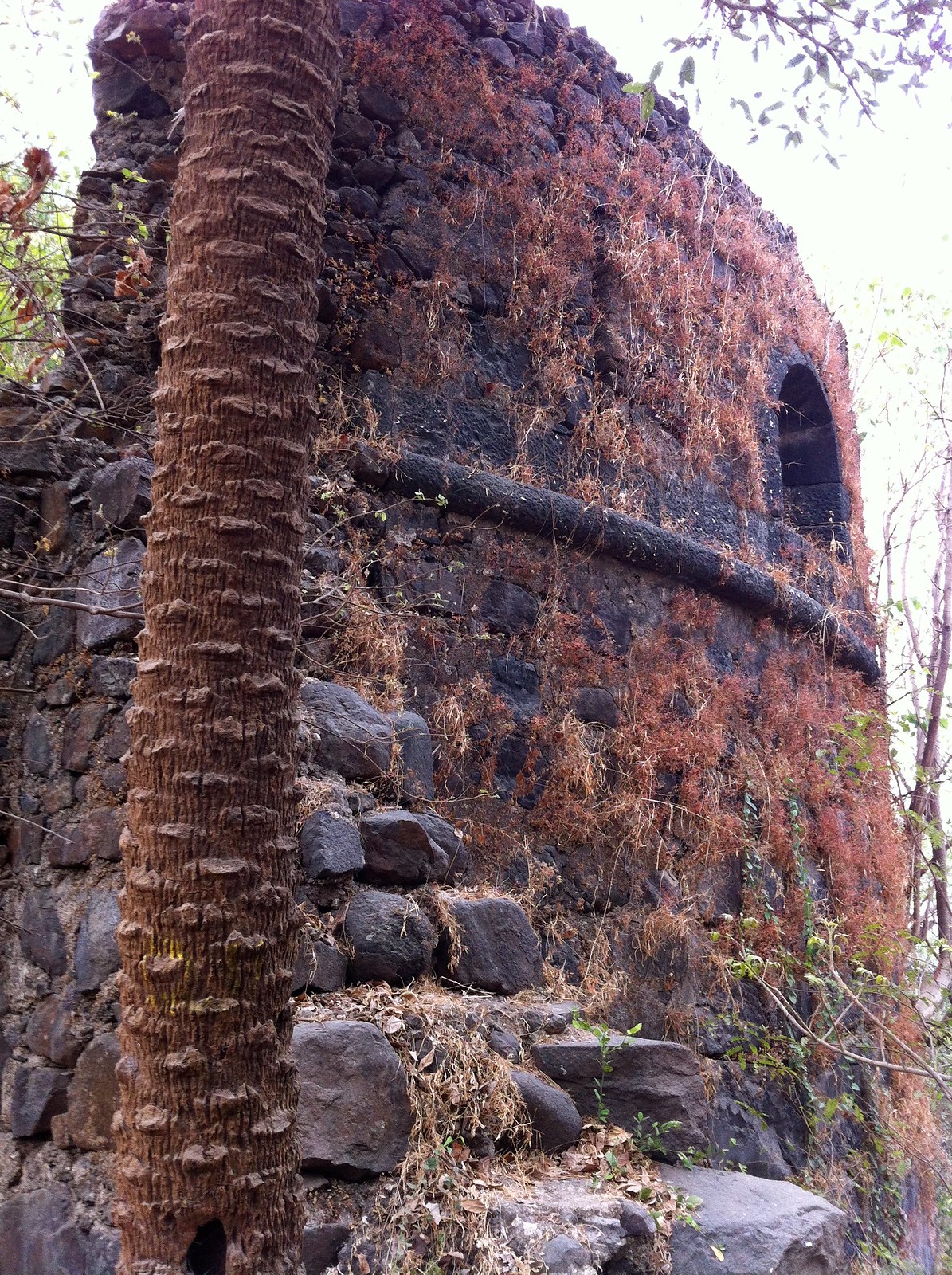 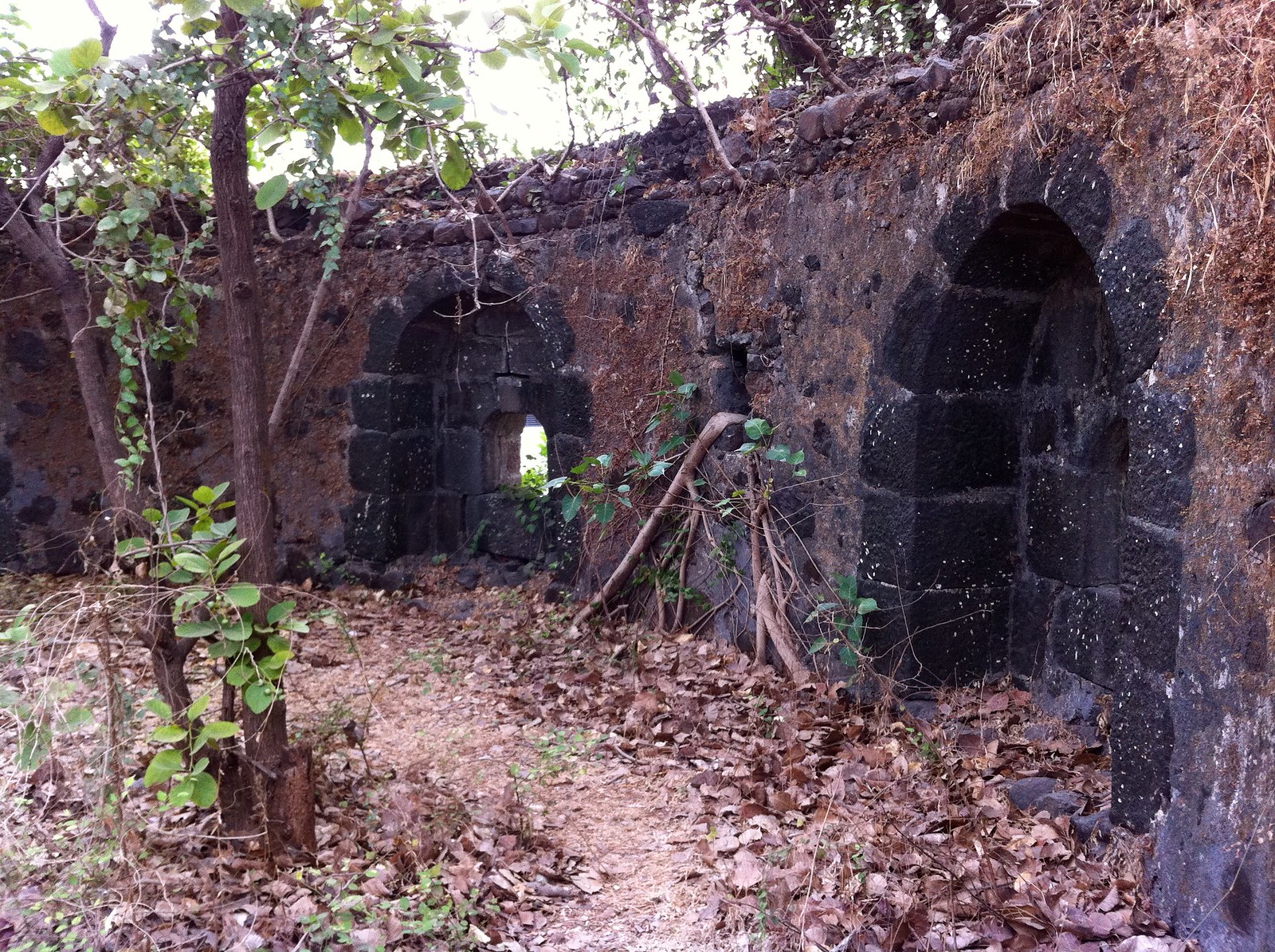 Once you climb up on the higher level, there is a walk-way around the bastion with arches all around 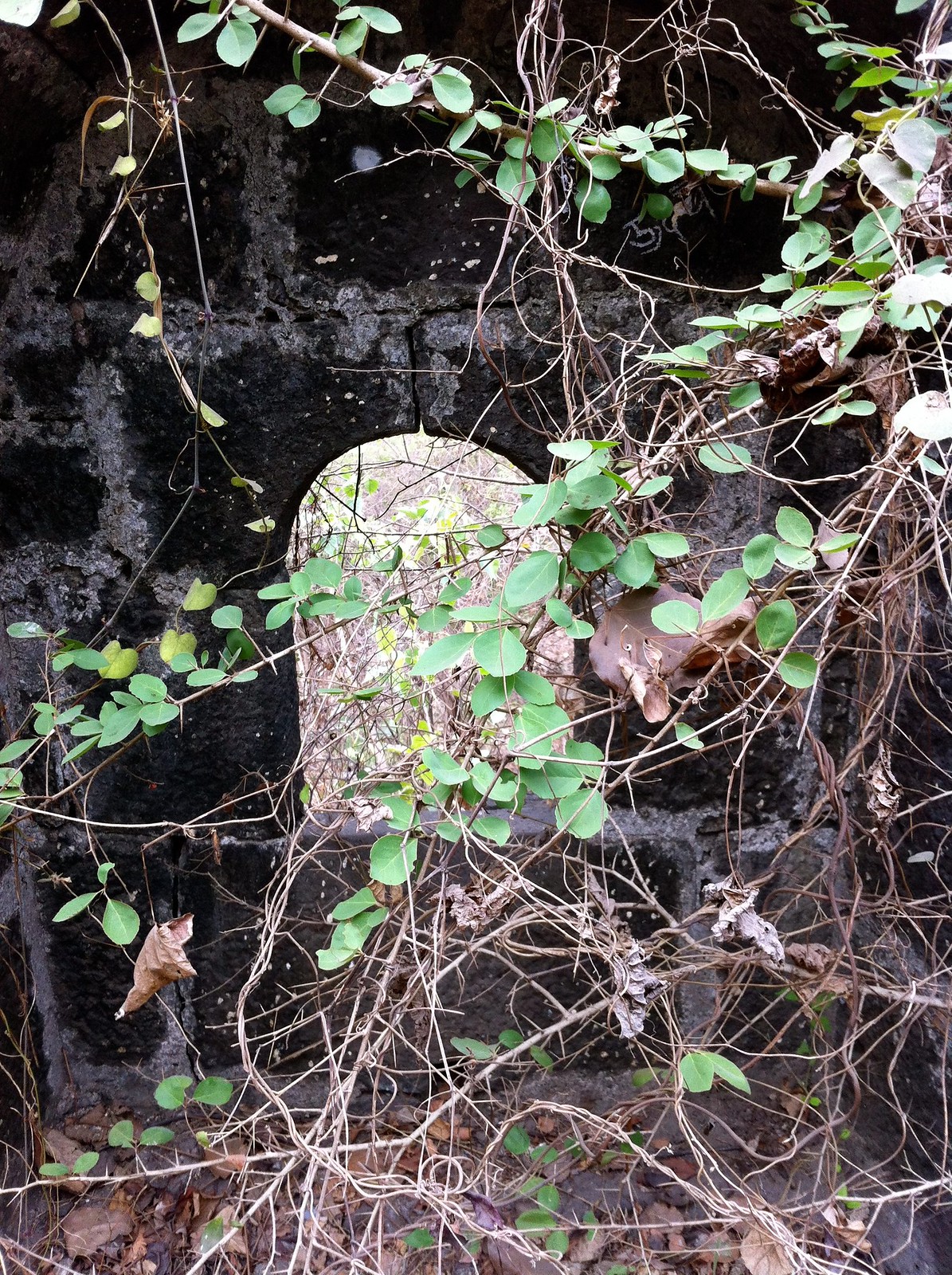 In each arch, there is a small port hole through which you can see the surrounding area 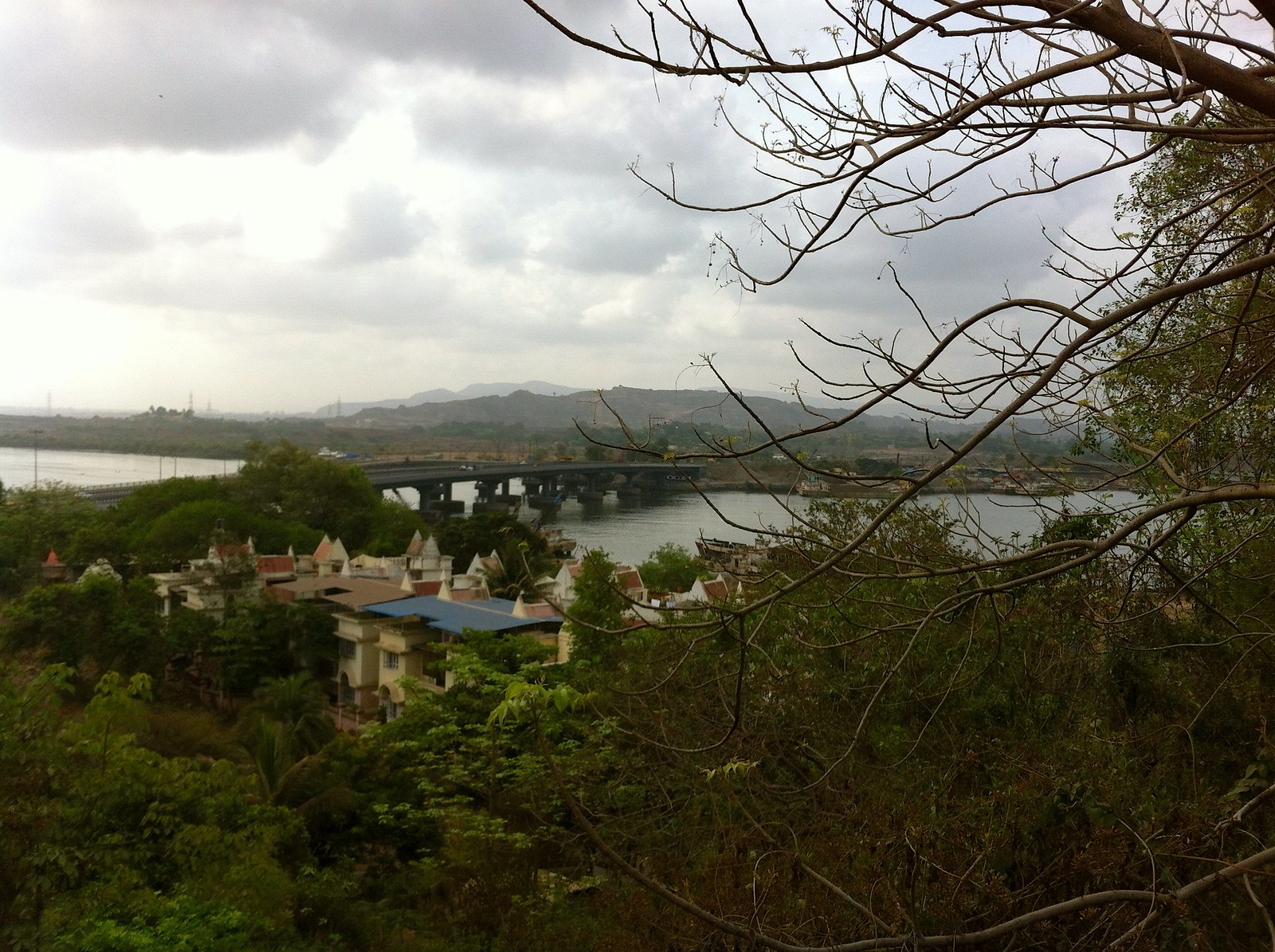 The view from the bastion towards Panvel creek reveals the Uran bridge, which we could see from a distance from Divale village

Finally it is time to head back down, for I have already spent over 2 hours between the two locations, and it is already getting quite hot. 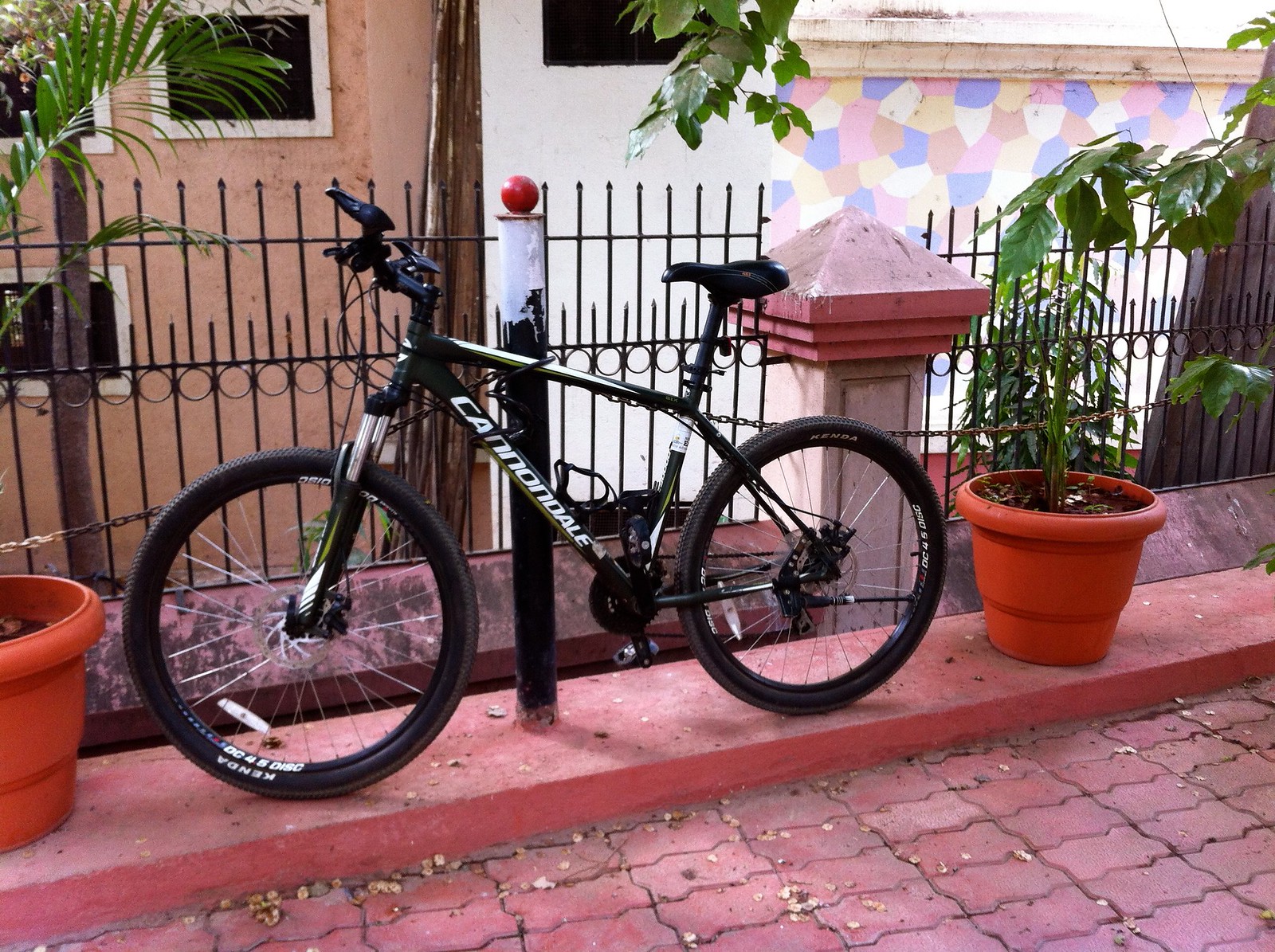 I take a short tour of the Belapur port that is just ahead from this road, but it turns out to be quite nondescript, with a few yachts moored there, and people busy cleaning and painting them. 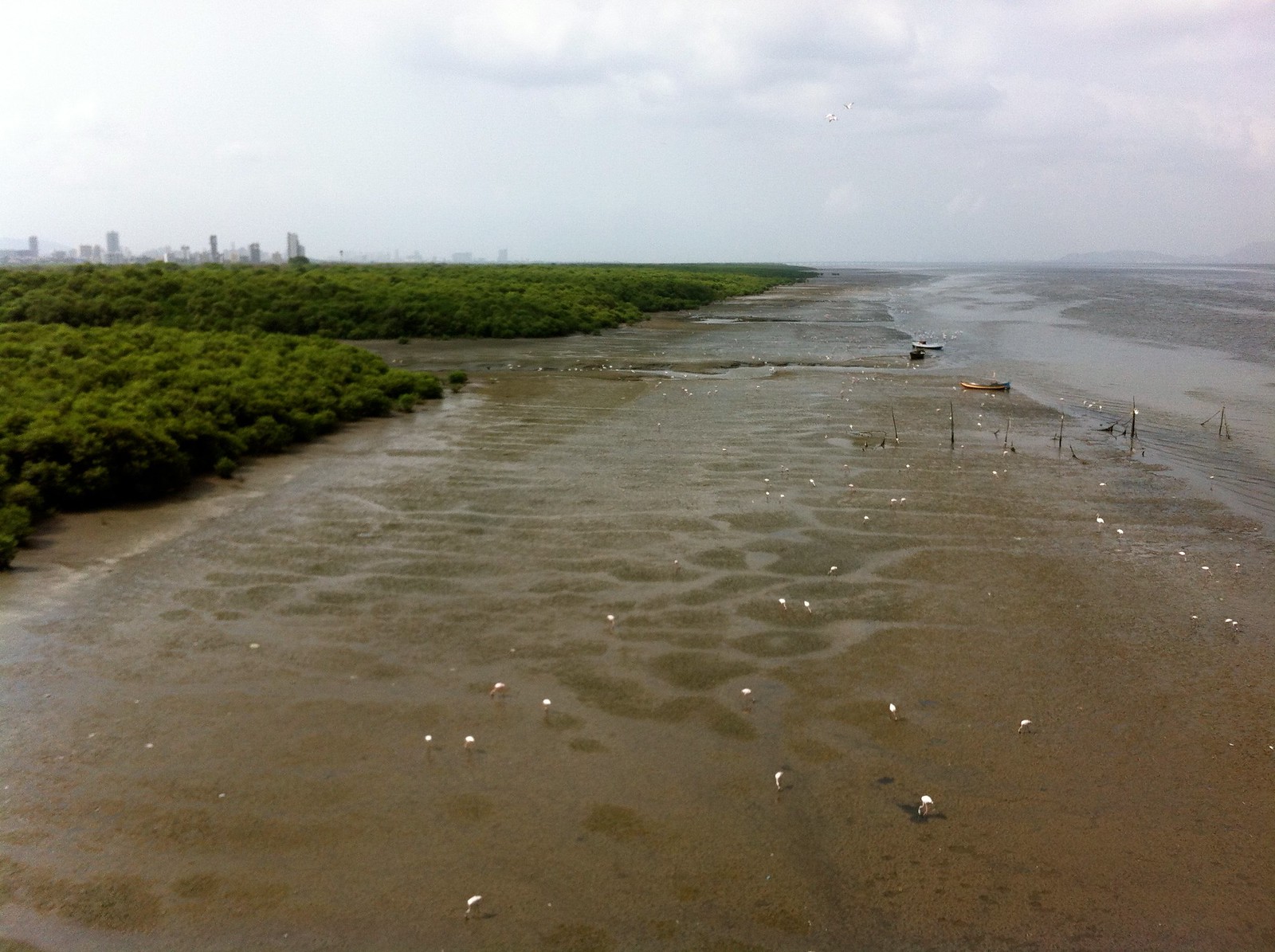 On the way back, I stop for a while at Airoli to admire the flamingoes feeding on the mudflats below the bridge 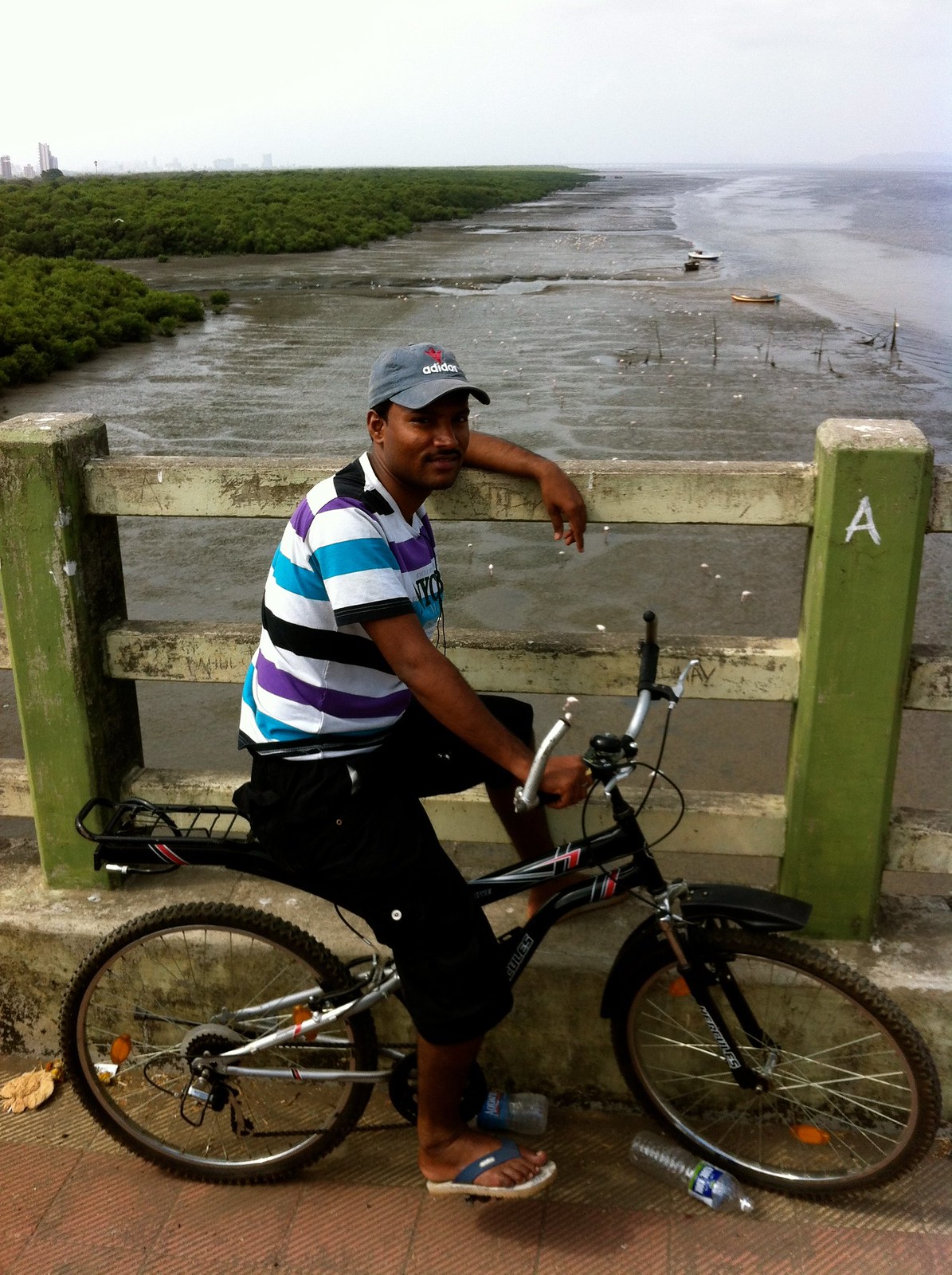 Here I met a fellow cyclist who is a resident of Airoli, and was enjoying a peaceful Sunday morning 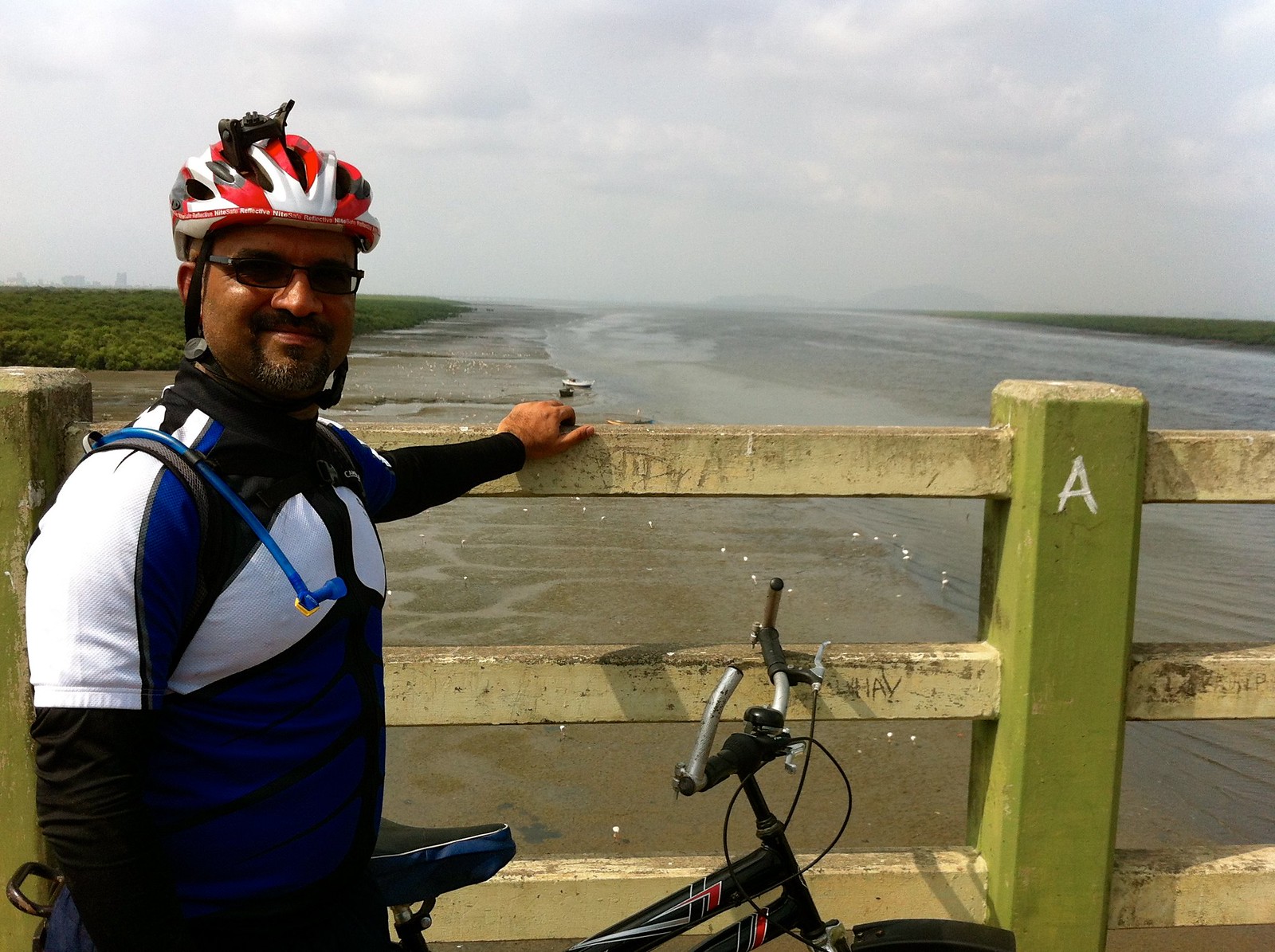 I then rushed off, leaving him to enjoy his morning in peace. Though it was quite hot, the cool but moderate head wind was comfortable without forcing me to exert myself too much.

I reached back home by 10:30 am. This was a good ride – over 80 km of cycling – but I was left with a melancholy mood about the disappearing historical sites.