During my visit to Bangalore in September to speak at a big data conference, I took the opportunity to do some cycling on the following day, as it happened to be a Saturday.

I did a bit of research to find a good place at approximately 50 km distance from Bangalore and found some nice photographs of Manchanbele reservoir that cyclists had posted on the Bangalore Cycling Club group. Locating it on the map, I found it to be within 50 km of Bangalore and so it seemed to fit my requirements just fine.

The route I had planned was to start from Indira Nagar where I was staying, and follow the Mysore road, take the detour to the Big Banyan Tree, and ride ahead to Manchanbele reservoir. 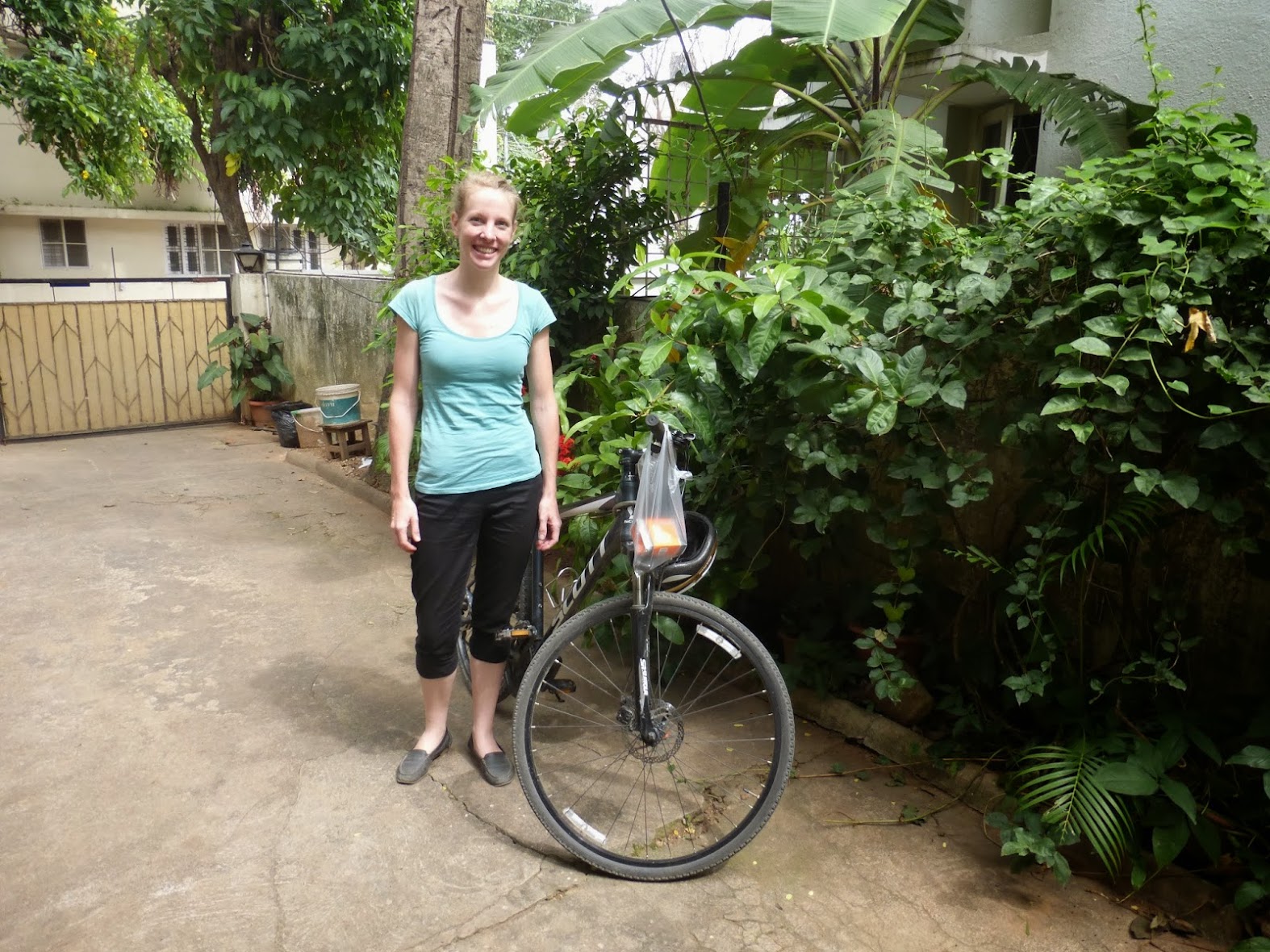 I rented a Scott X50 Sportster from The Art of Bicycle Trips – and Ehlin was kind enough to drop the cycle to Indira Nagar on the previous evening. In my last trip to Bangalore, I had rented a cycle from someone in the market place on BumsOnTheSaddle’s web site. But I had a bit of trouble with the brakes, so decided to spend a little more and rent one from a professional agency – turned out to be a good decision! 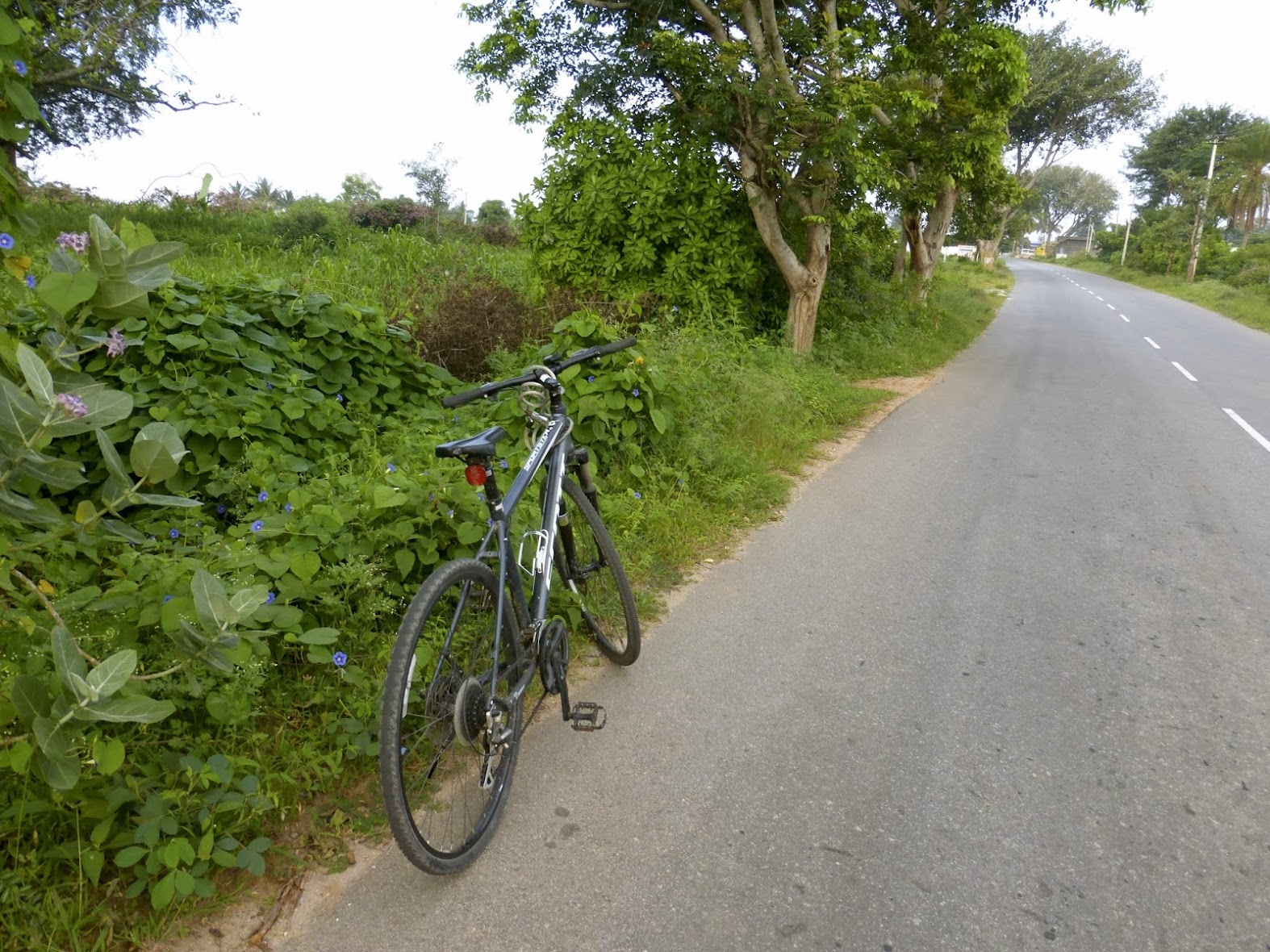 I started early in the morning at 5:30 am to avoid the traffic and followed Mysore road till I crossed the Bangalore–Mysore Infrastructure Corridor (also called as NICE Ring Road). A few kilometers ahead there is the Rajarajeshwari Dental College on the right, adjoining which is the road leading to the Big Banyan Tree. Once you get on this road, you leave behind the traffic of the highway and get into the beautiful country road that winds its way through greenery and small villages till you reach the Big Banyan Tree in Kettohalli village

The Big Banyan Tree or Dodda Alada Mara is a giant 400 year old Banyan tree, a single plant covers a total area of 3 acres and is one of the largest of its kind. It has a crown circumference of more than 250 meters and has more than a thousand aerial roots! There is a fenced garden constructed in the area covered by the tree, with walking paths and benches. In the middle of the park is a small temple. 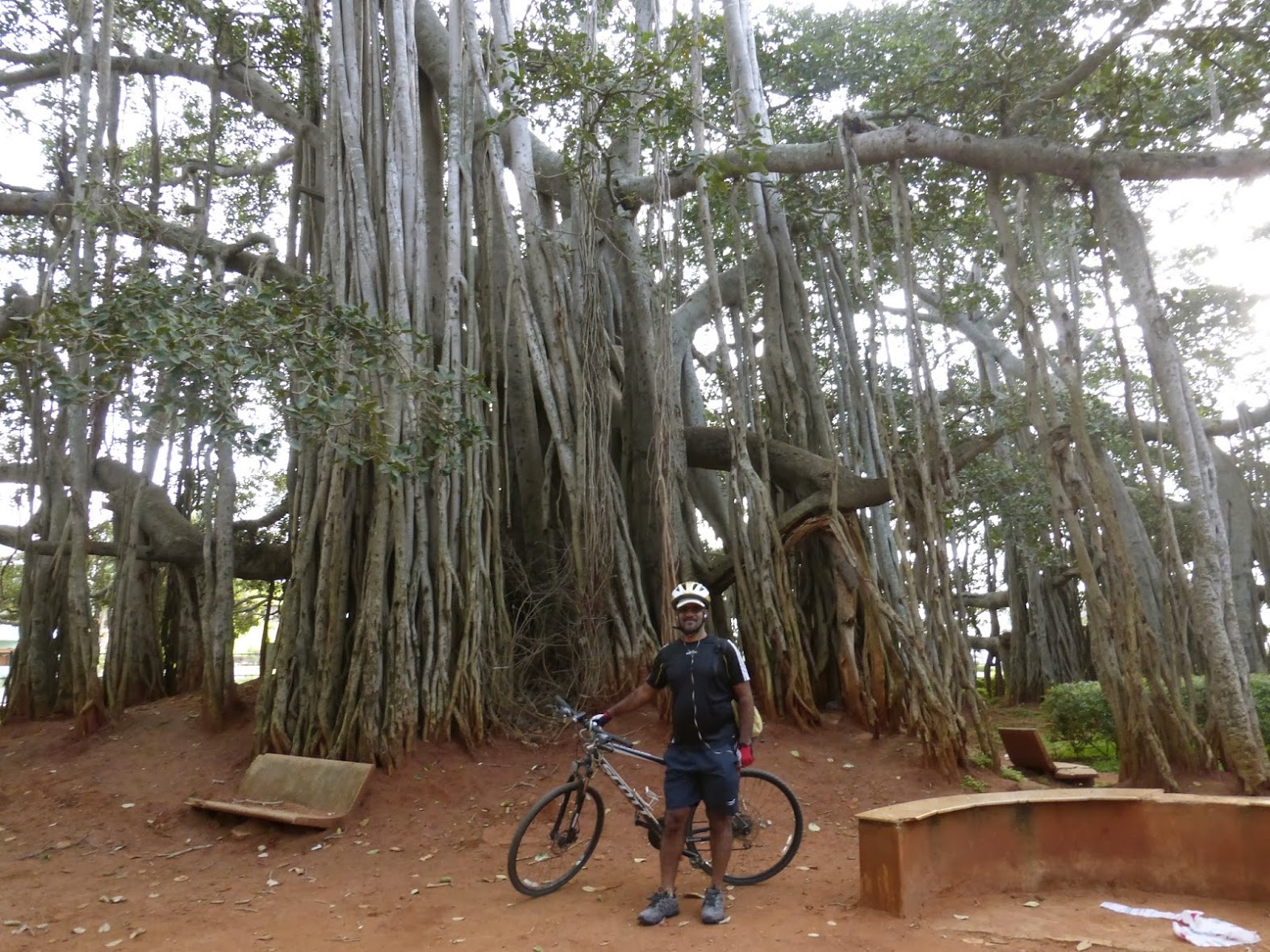 For I reached there quite early in the day, it was quite deserted and I just managed to find one other person sitting around, who was kind enough to click a photo of me against the massive Banyan tree roots 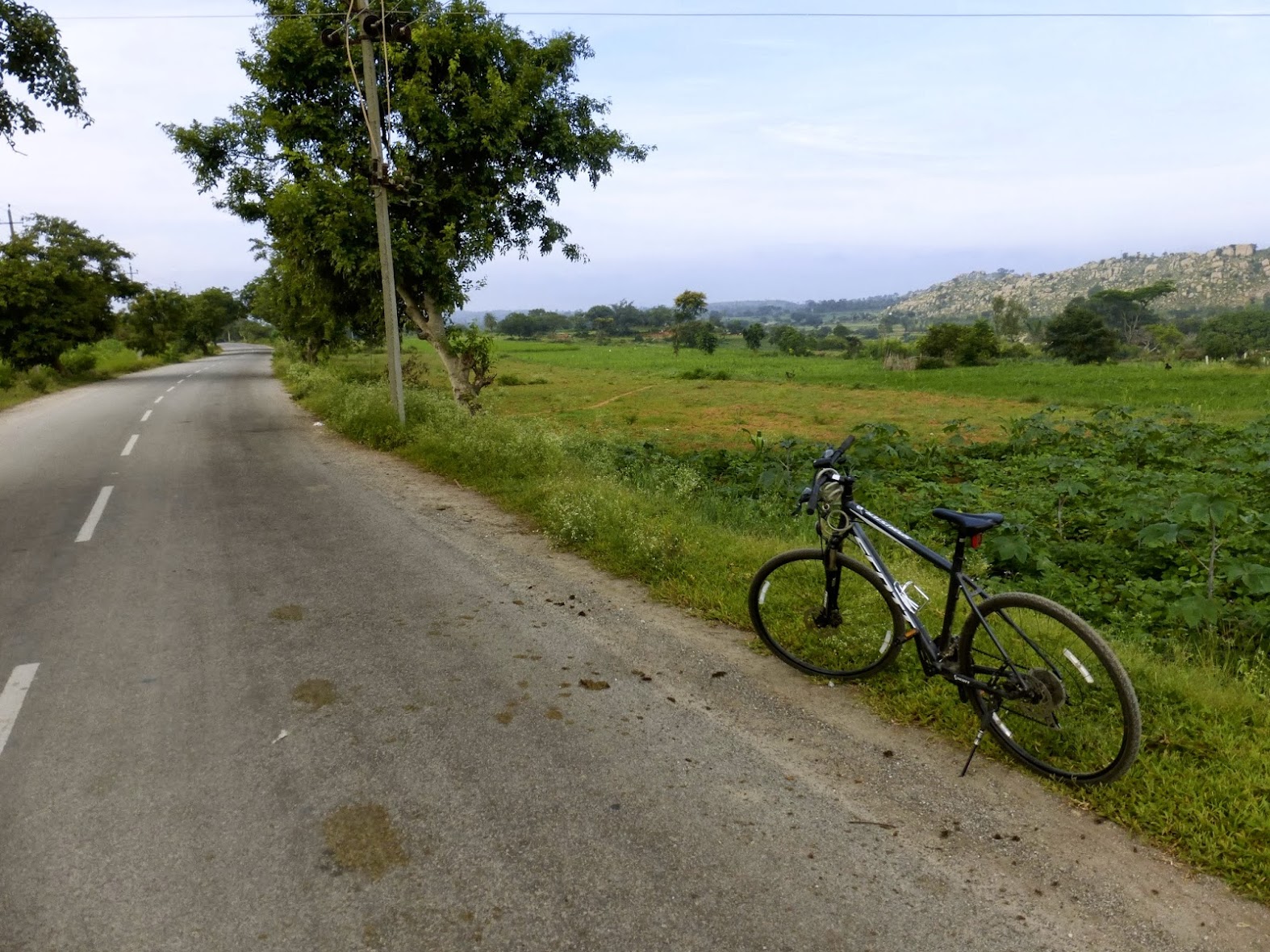 A few kilometers ahead of the Big Banyan Tree, you come to a junction where the left takes you to ISRO and further to Manchanbele. After ISRO, there is a gradual climb, though not very steep. The typical granite rock hills can be seen on the right 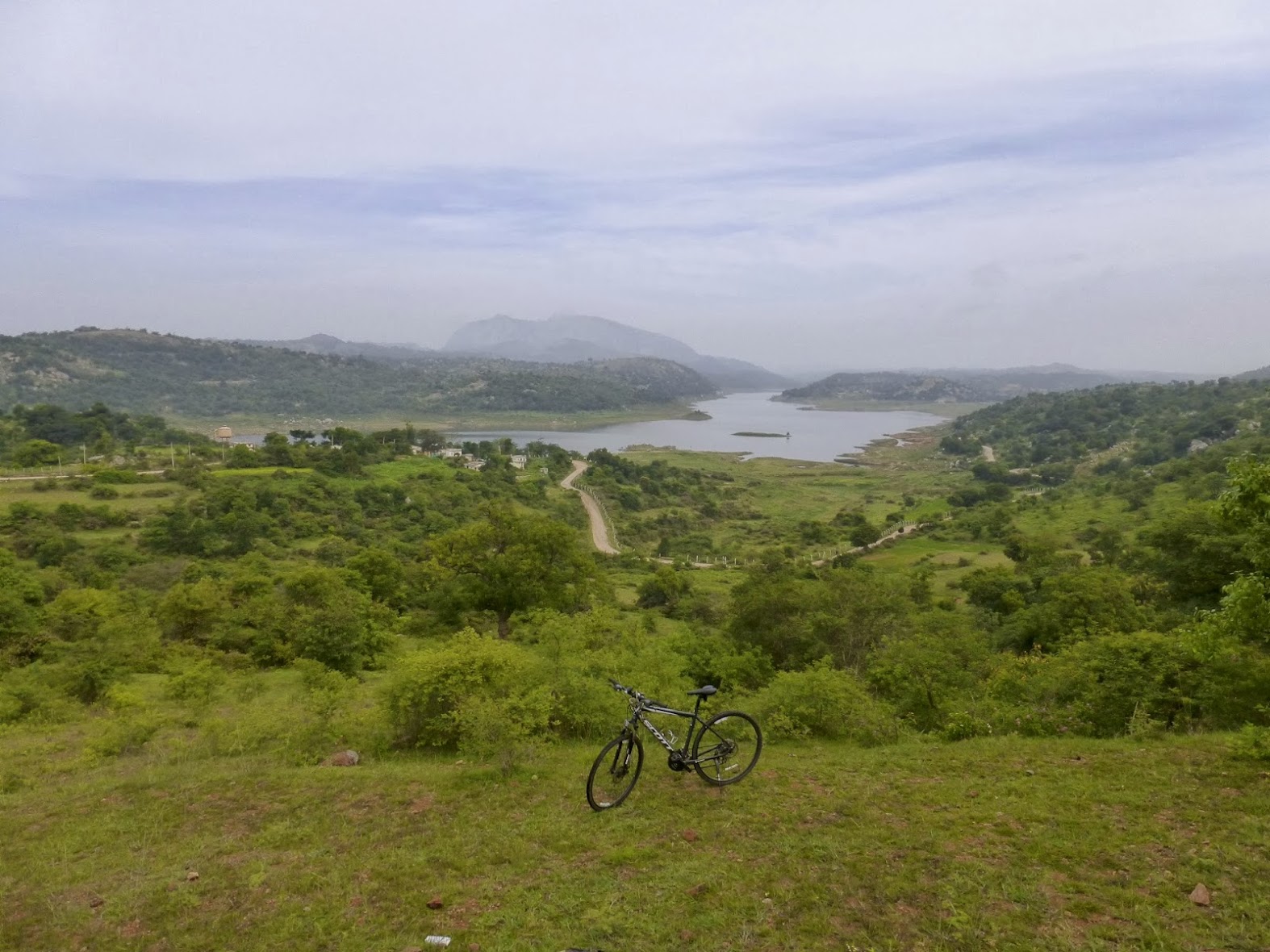 At the top of the gradient, the road suddenly turns around a hill and you get this stunning view of the valley with Manchanbele reservoir in it, and the Savandurg hill on the left of the waters. In the foreground, the road that leads to the reservoir can be seen winding its way down. I followed that road to reach the water 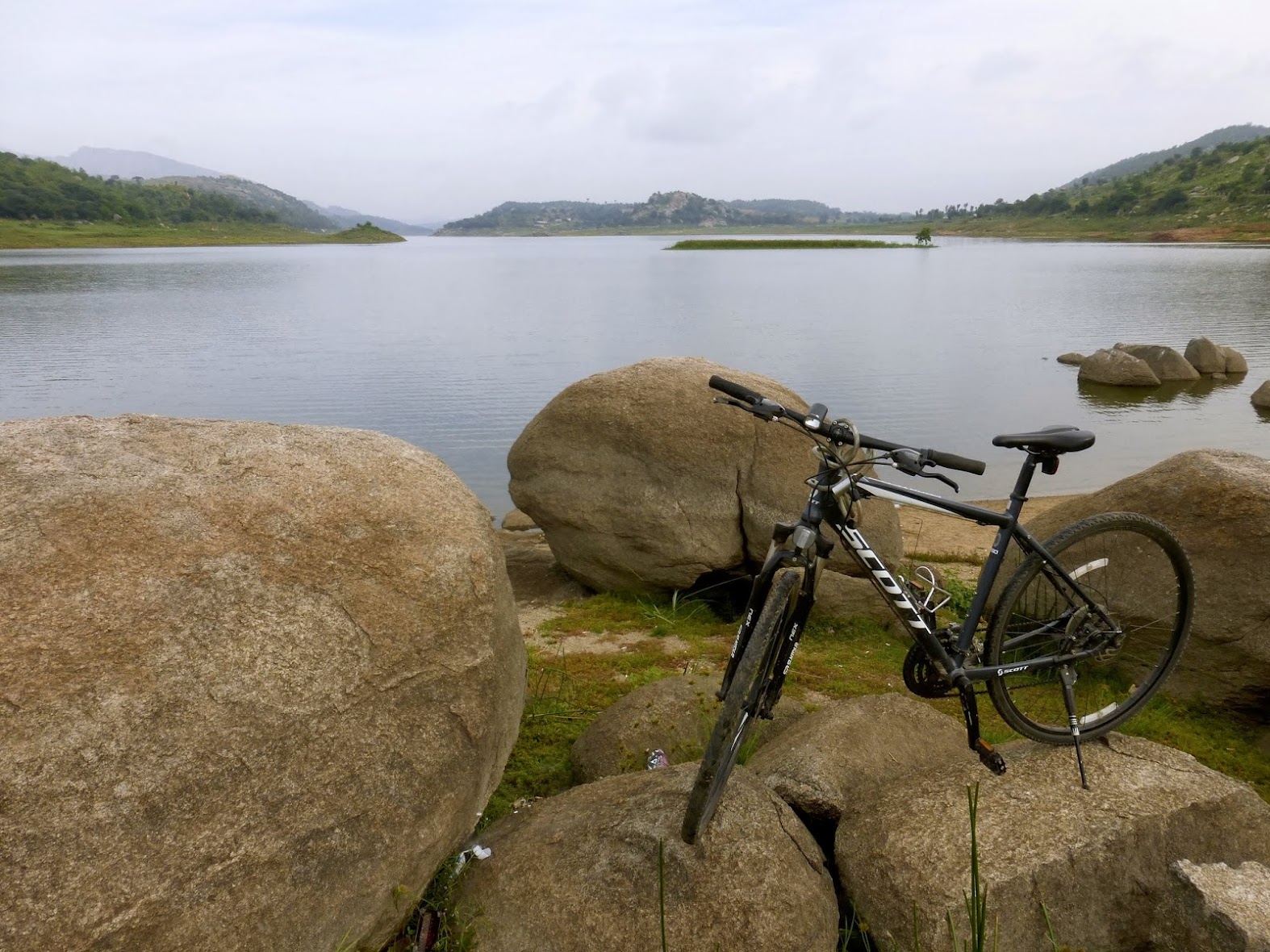 The water was serene and calm, and there were water birds feeding at the shore. I parked the cycle on some rocks and walked around a bit, trying to catch some birds photos. But as soon as they saw me coming closer, they would fly away 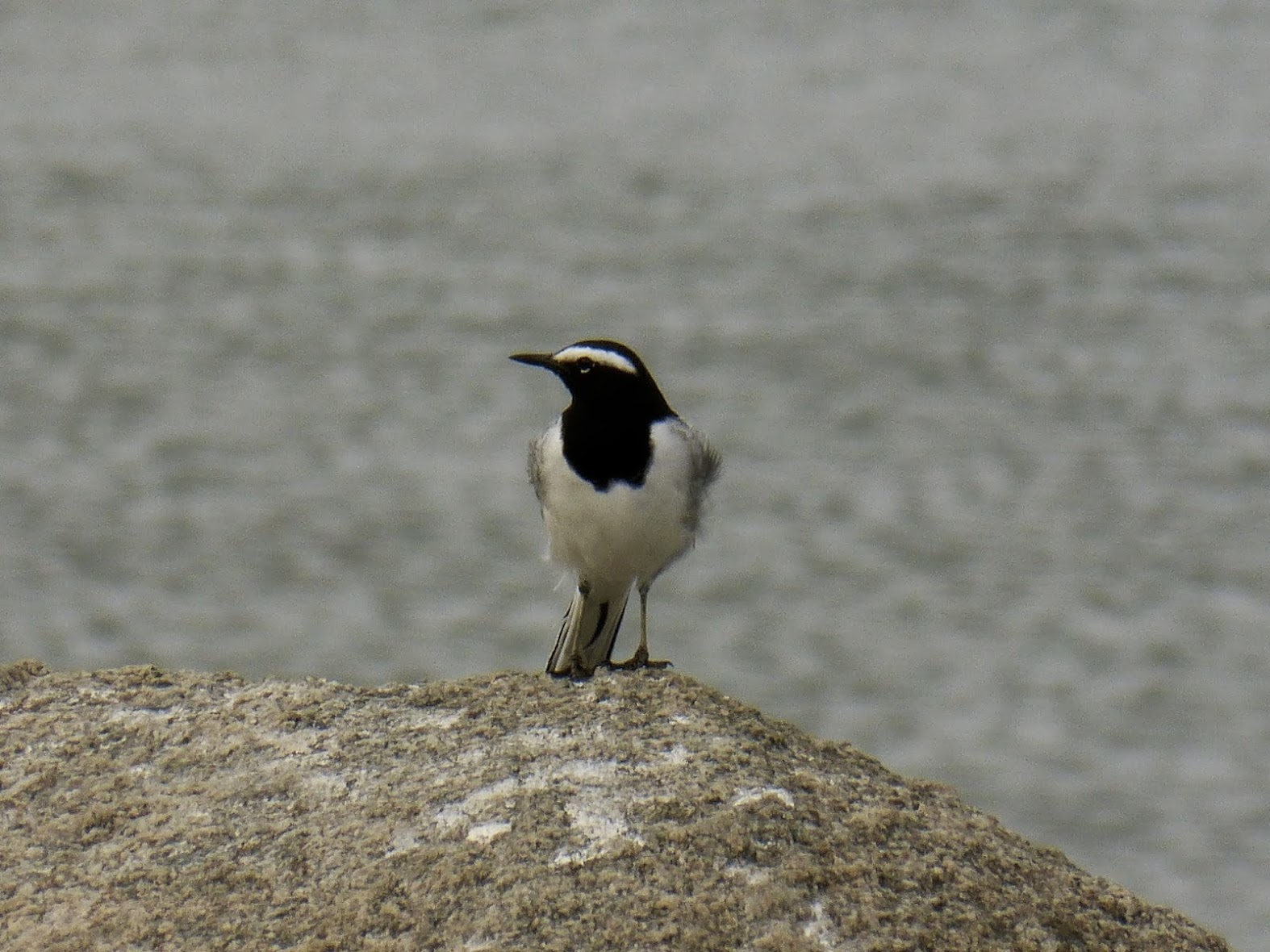 The only birds I managed to catch on my camera were this little birds that were sunning themselves on the rocks, with a black head and a distinct white eyebrow 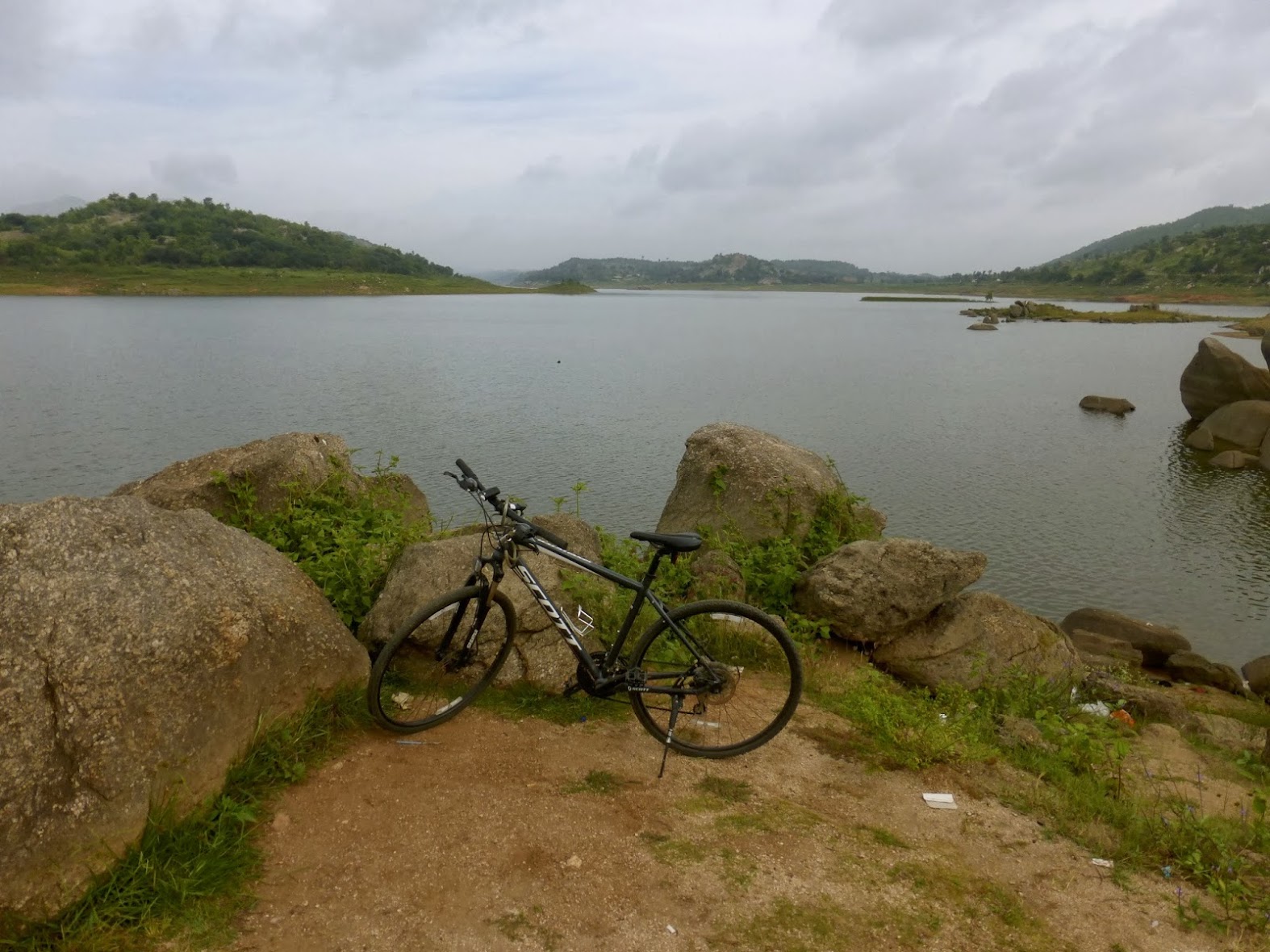 As I walked around the shore, I recalled reading about how dangerous it is to try and swim here, even though the water looks serene and calm. Apparently over 200 people have drowned here between 2006 and 2011 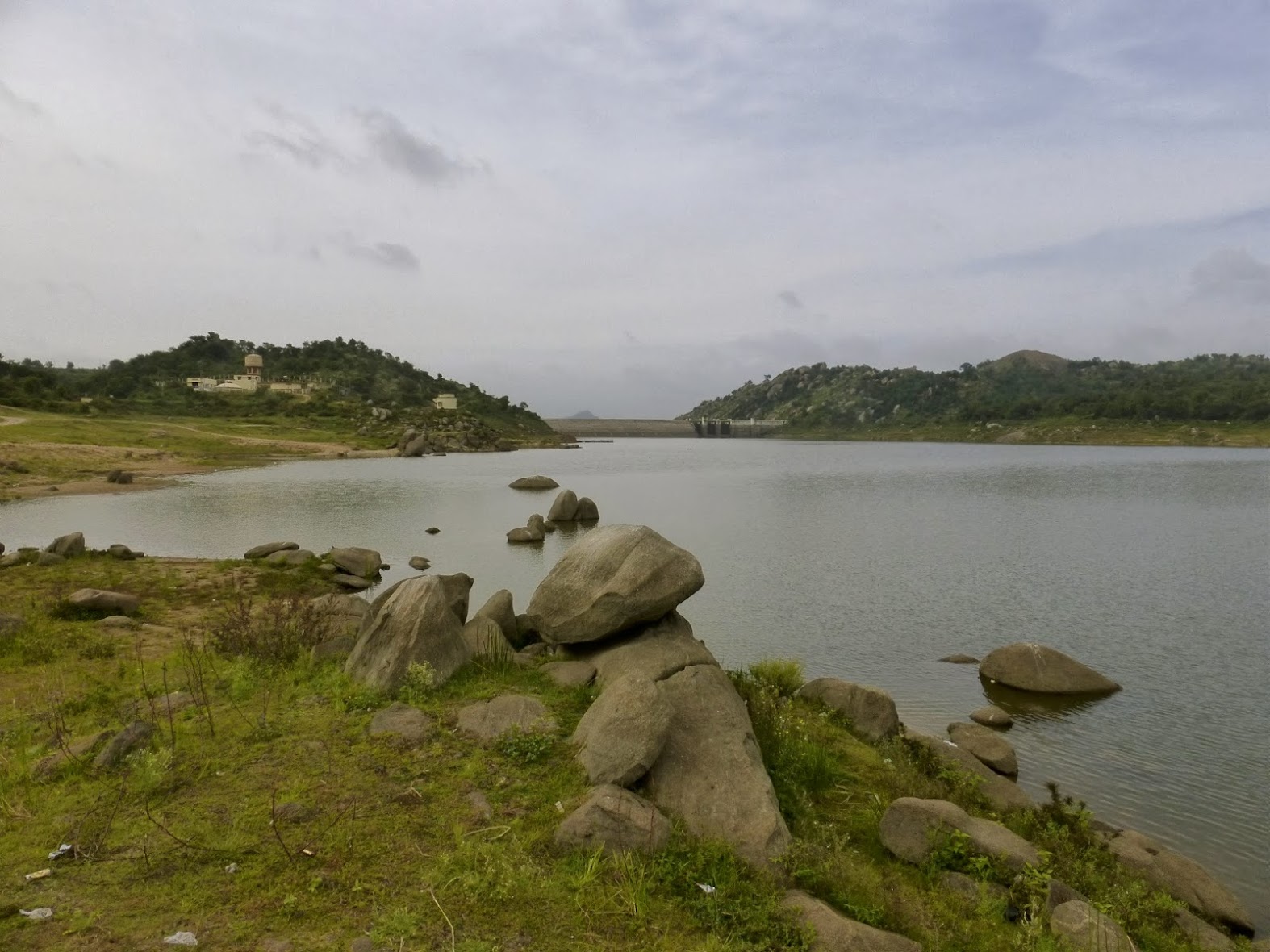 The Manchanbele dam, that holds the water in the reservoir can be seen at one end of the lake. The dam was built for irrigation across the river Arkavathi, and provides water to the nearby Magadi village. The land which got submerged due to this project is called “Thore saalu” – “thore” means river and “saalu” means line in Kannada 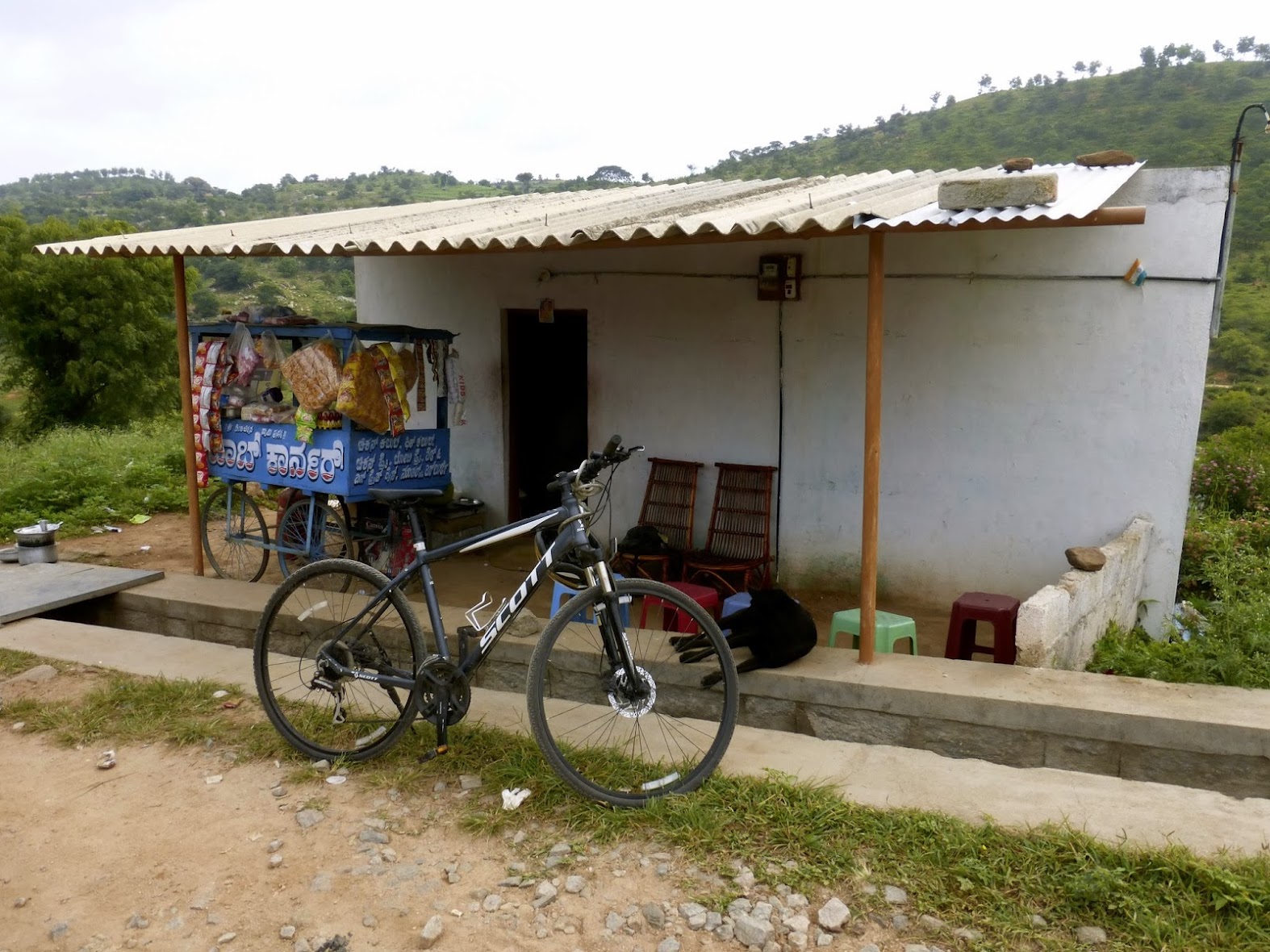 After spending a little over an hour near the water, I was thirsting for some tea, and this was the only small shop that was serving tea, with the omnipresent ParleG biscuits 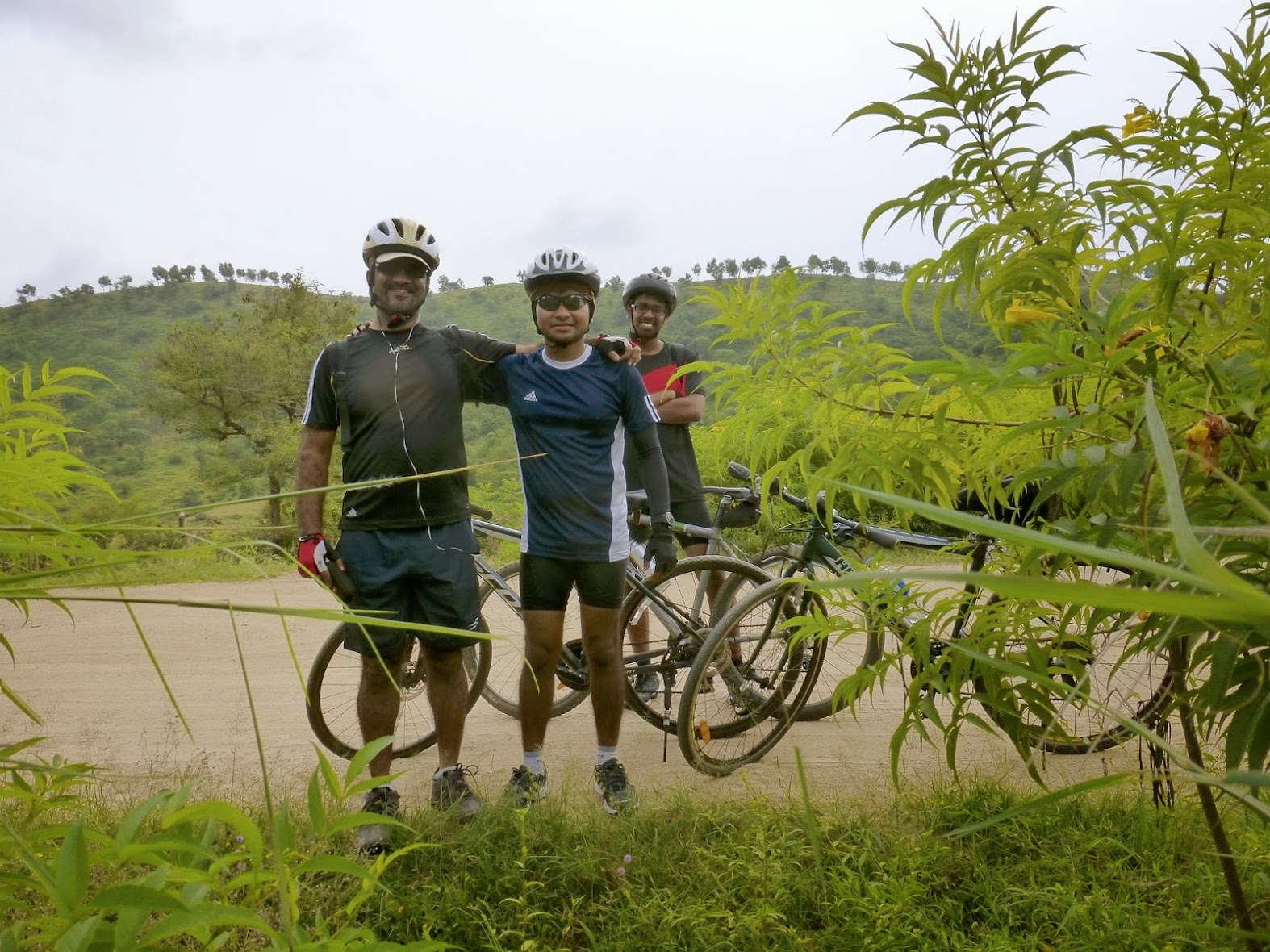 After having some refreshing tea, I started riding back the same way back up the hill. That’s when I met these two young cyclists from Bangalore. Rahul Dutta and Soumajyoti Mazumder are both statistics graduates now working as data analysts in Bangalore. Great to meet them! 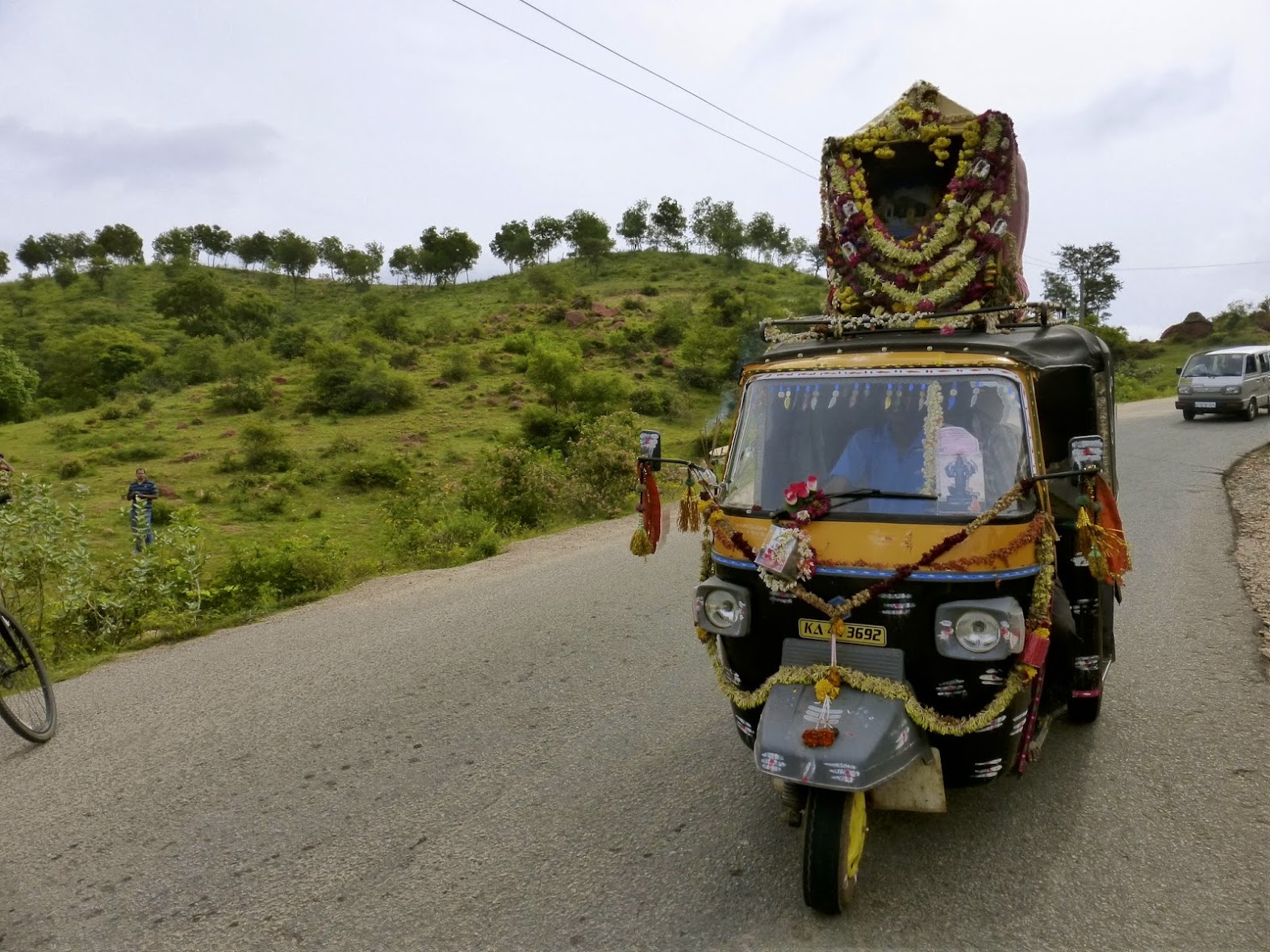 I then came across this rickshaw adorned with an idol of a god sitting on its roof, and the inhabitants going around in the villages to collect donations towards a holy ceremony 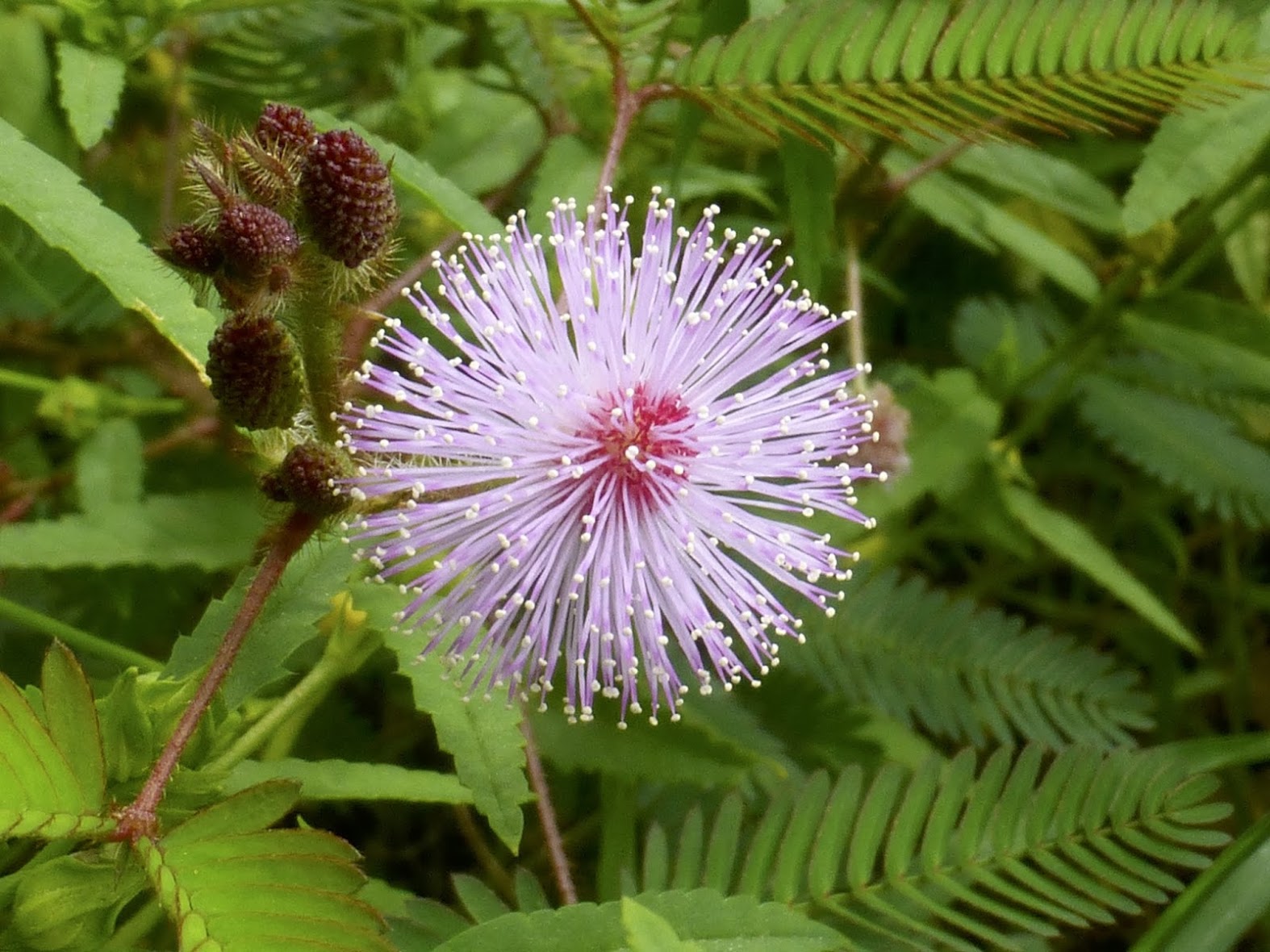 Along the road side there were several wild flowers with different colors and now that I had an idea of the distance I had to travel, I stopped by to click photographs of some of them 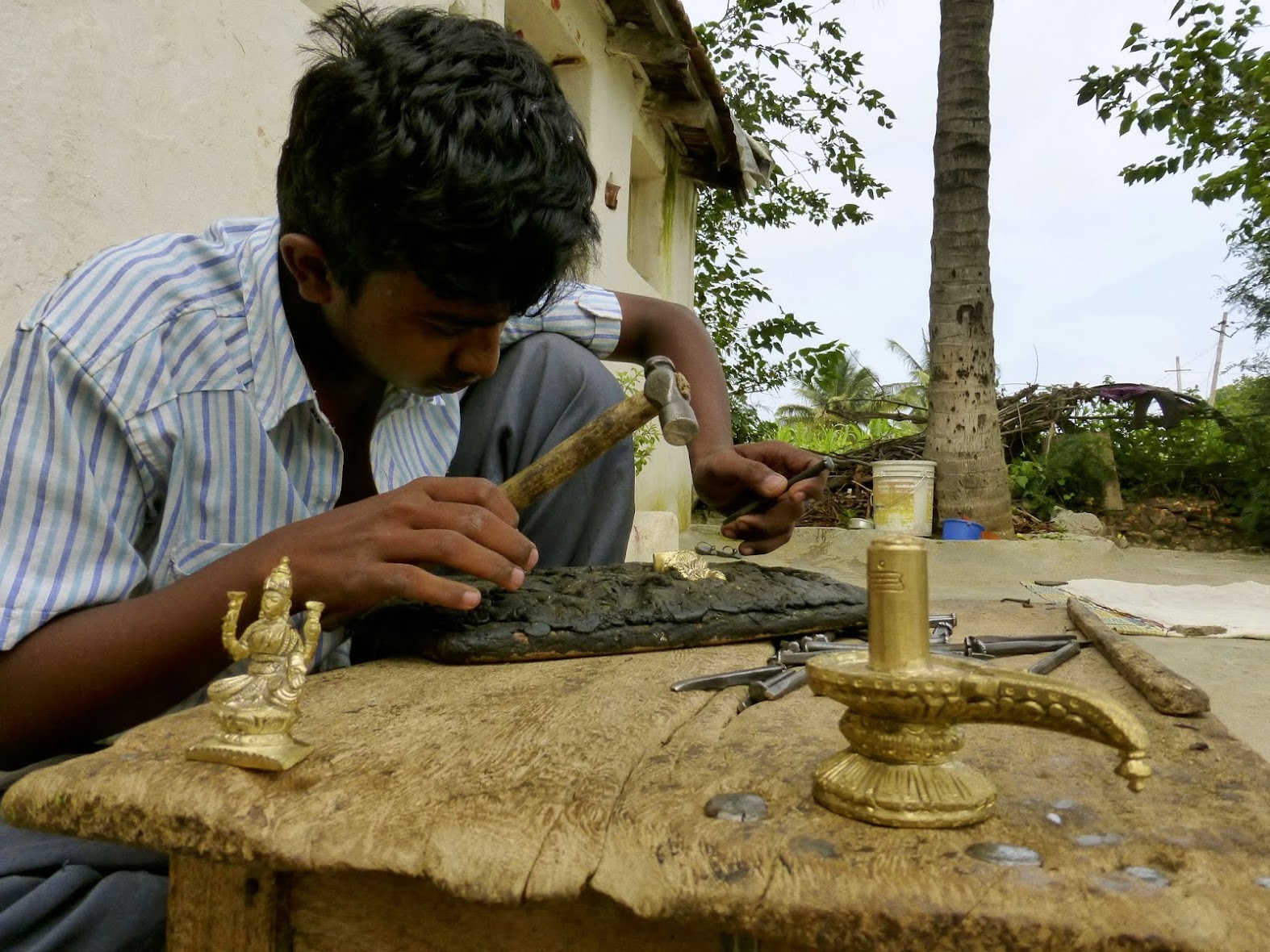 A little ahead, before I reached the ISRO turning, I heard someone make a rhythmic sound with hammer and chisel in their courtyard next to the road. I stopped to see what they were doing. They were sculptors who were working on small bronze statues of various gods and goddesses 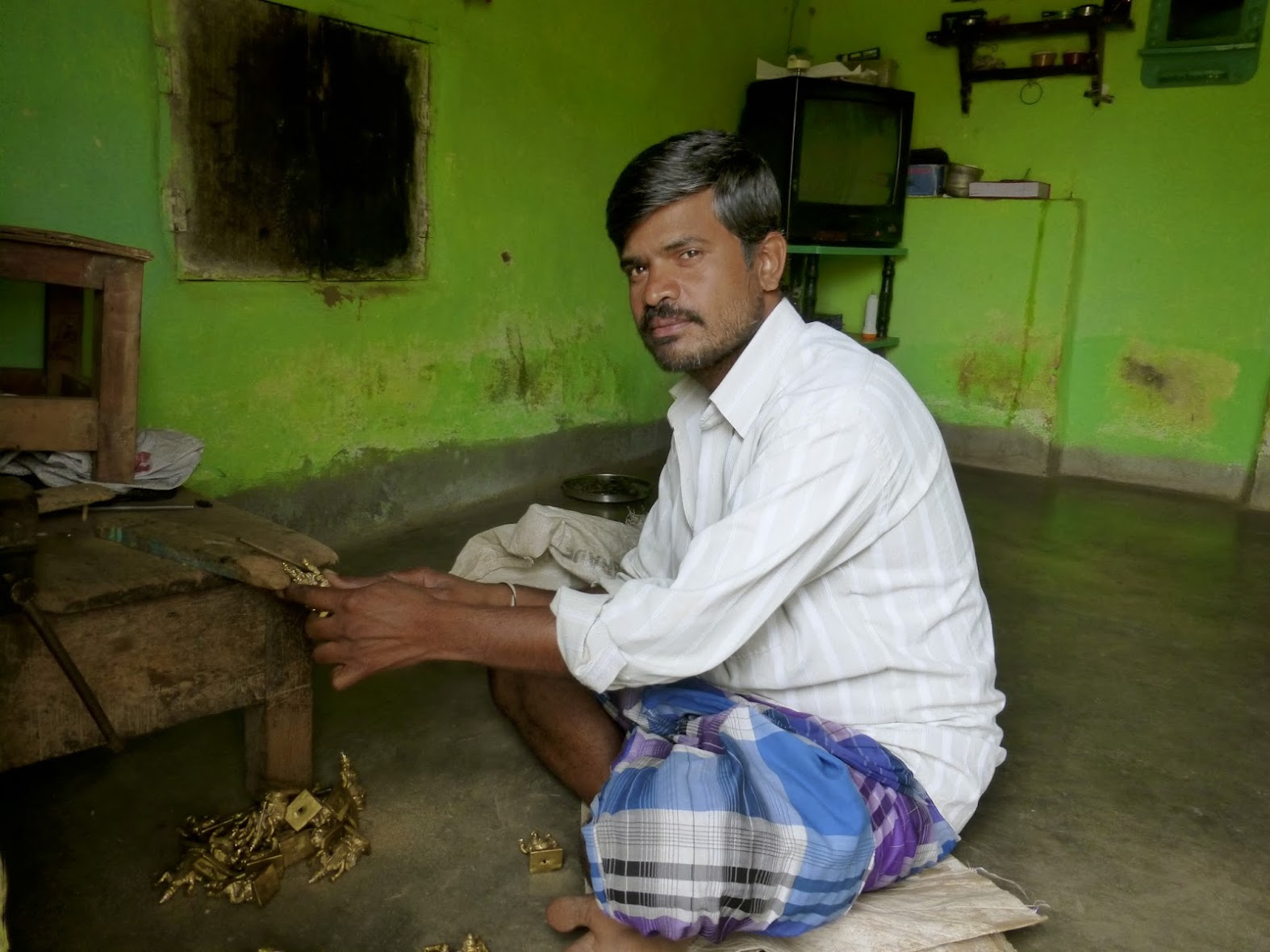 The son was sitting with his workstation in the courtyard outside, while the father was inside the house, concentrating on his intricate artwork. 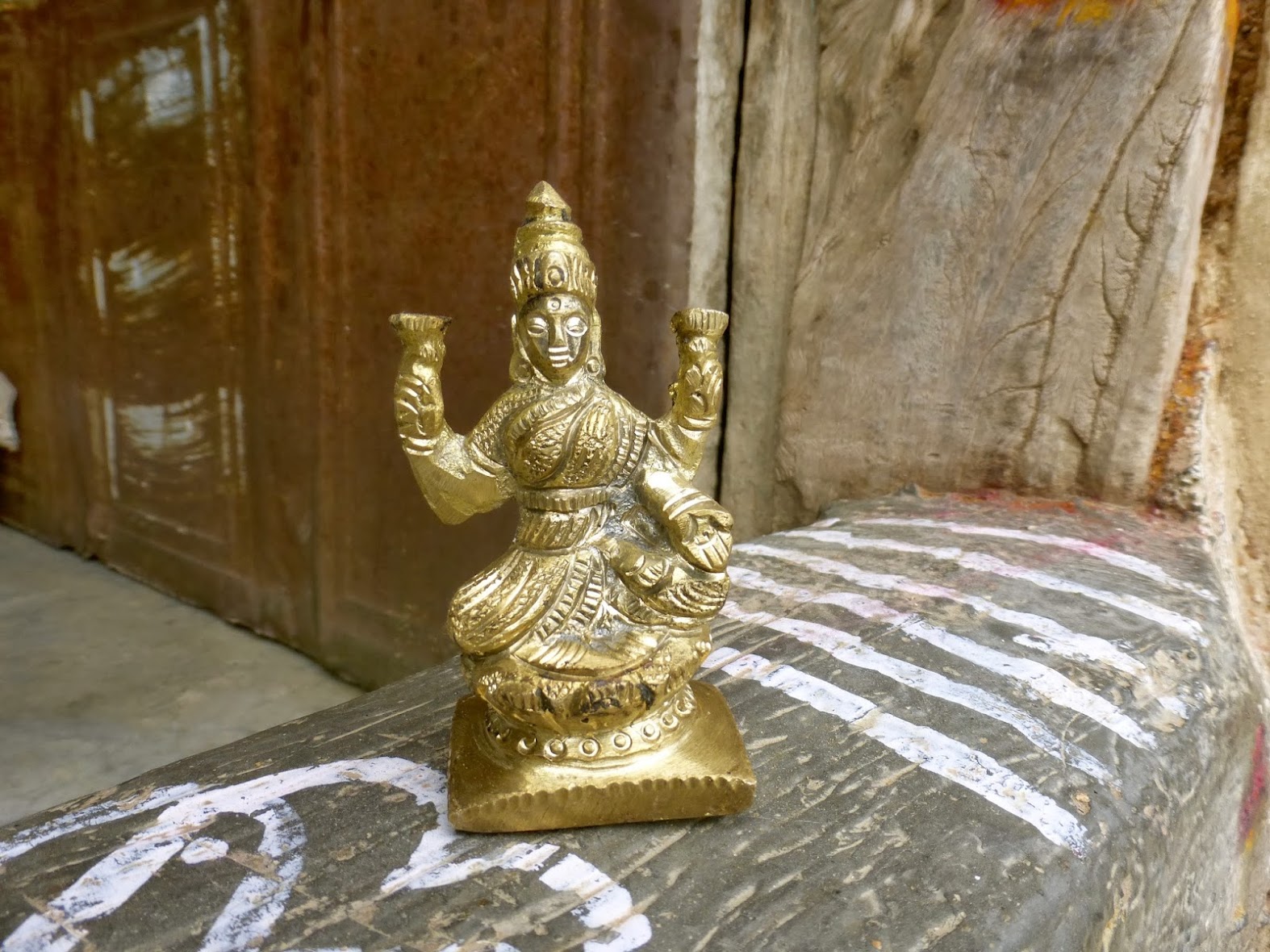 He showed me the work in progress statue he was working on, and explained that the basic shape is made in a mold, and then the decorations are all hand carved. This idol of Goddess Laxmi also has a fourth hand that is made separately and welded later on. 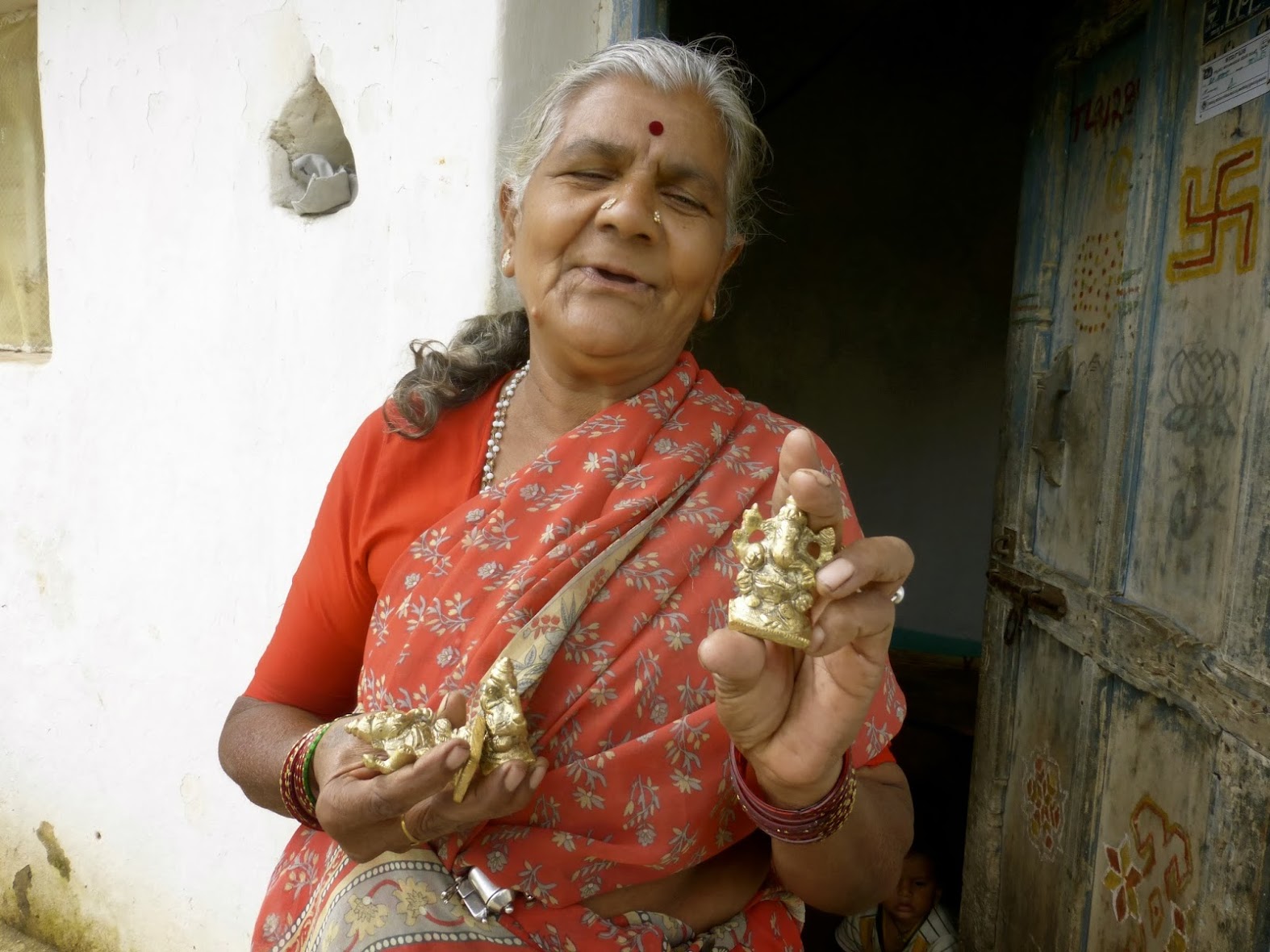 Their skill is passed on across generations. This is the grand mother who still carves statues and her speciality is making idols of Lord Ganesh or Ganapati. I was lucky enough to be able to buy one idol made by her… a sort of signed artwork with a special meaning! 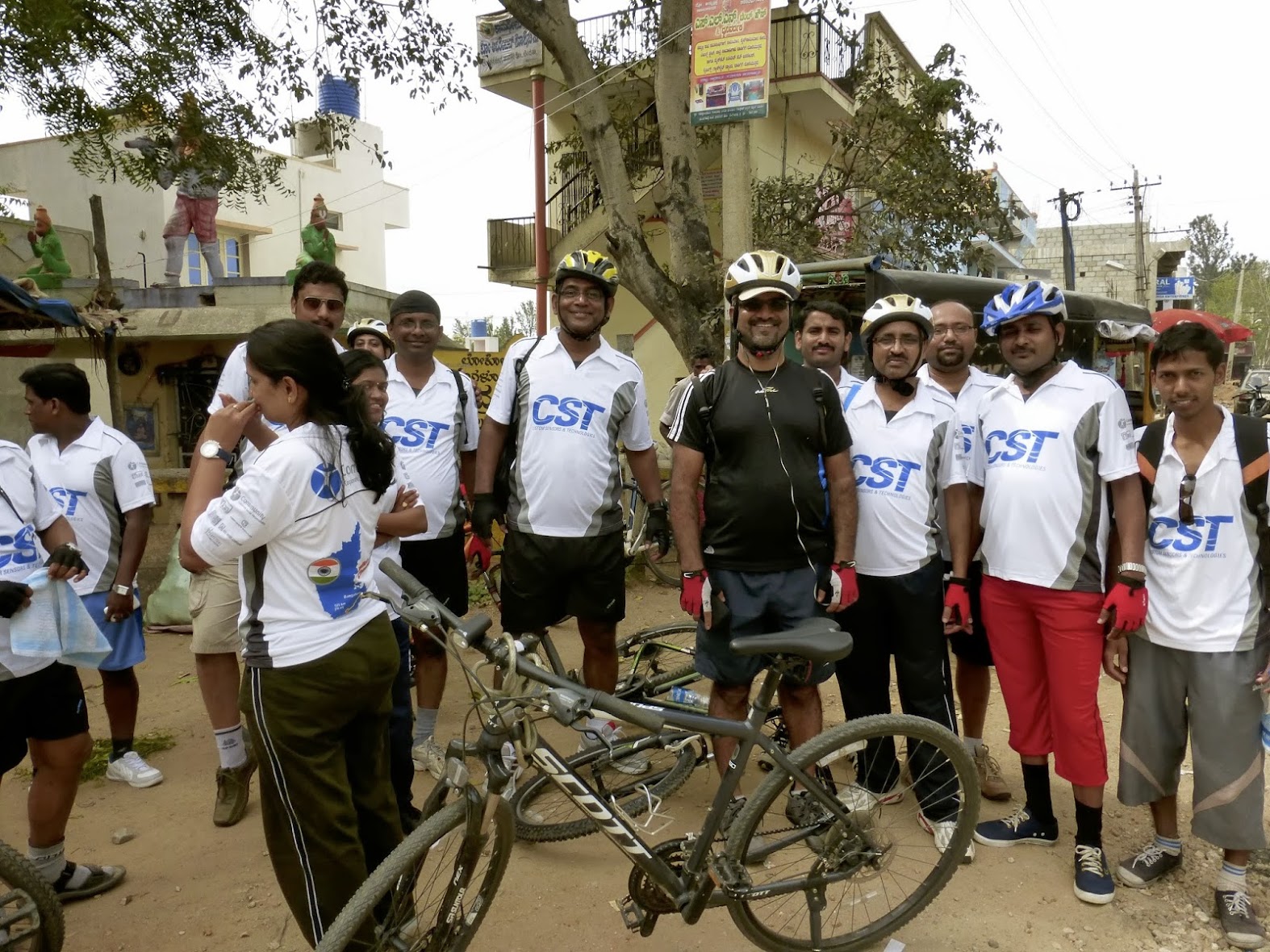 As I reached the ISRO junction, I noticed this group of cyclists who seemed to be from some corporate group. I introduced myself to them and came to know that they were cycling to Srirangapatna, the erstwhile capital of Mysore under the rule of the Wodayar king 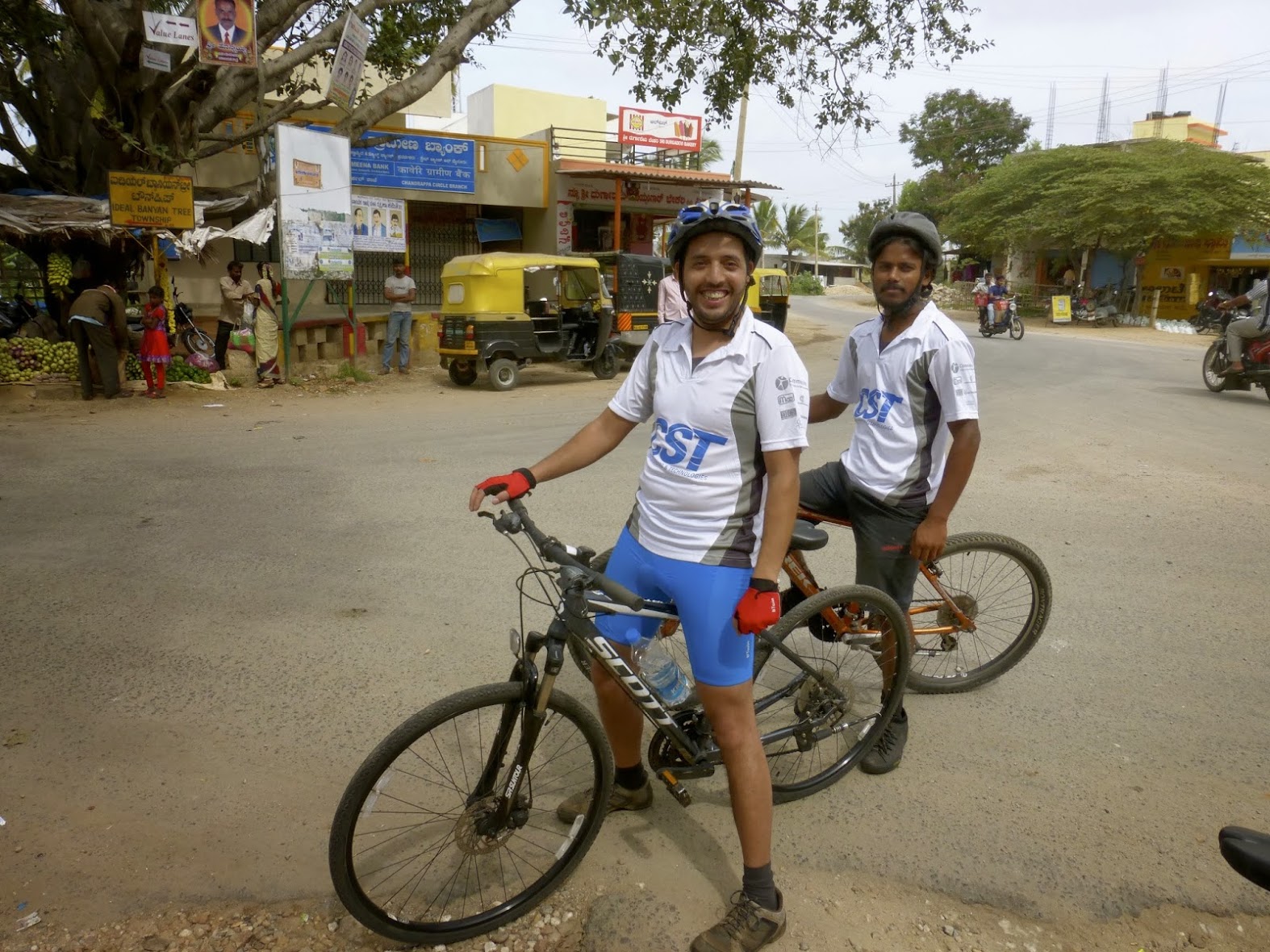 And the best surprise was meeting the two guides of the group – and they turned out to be from The Art of Bicycle Trips! And the way we figured that out was because they recognized my cycle to be from their stable! 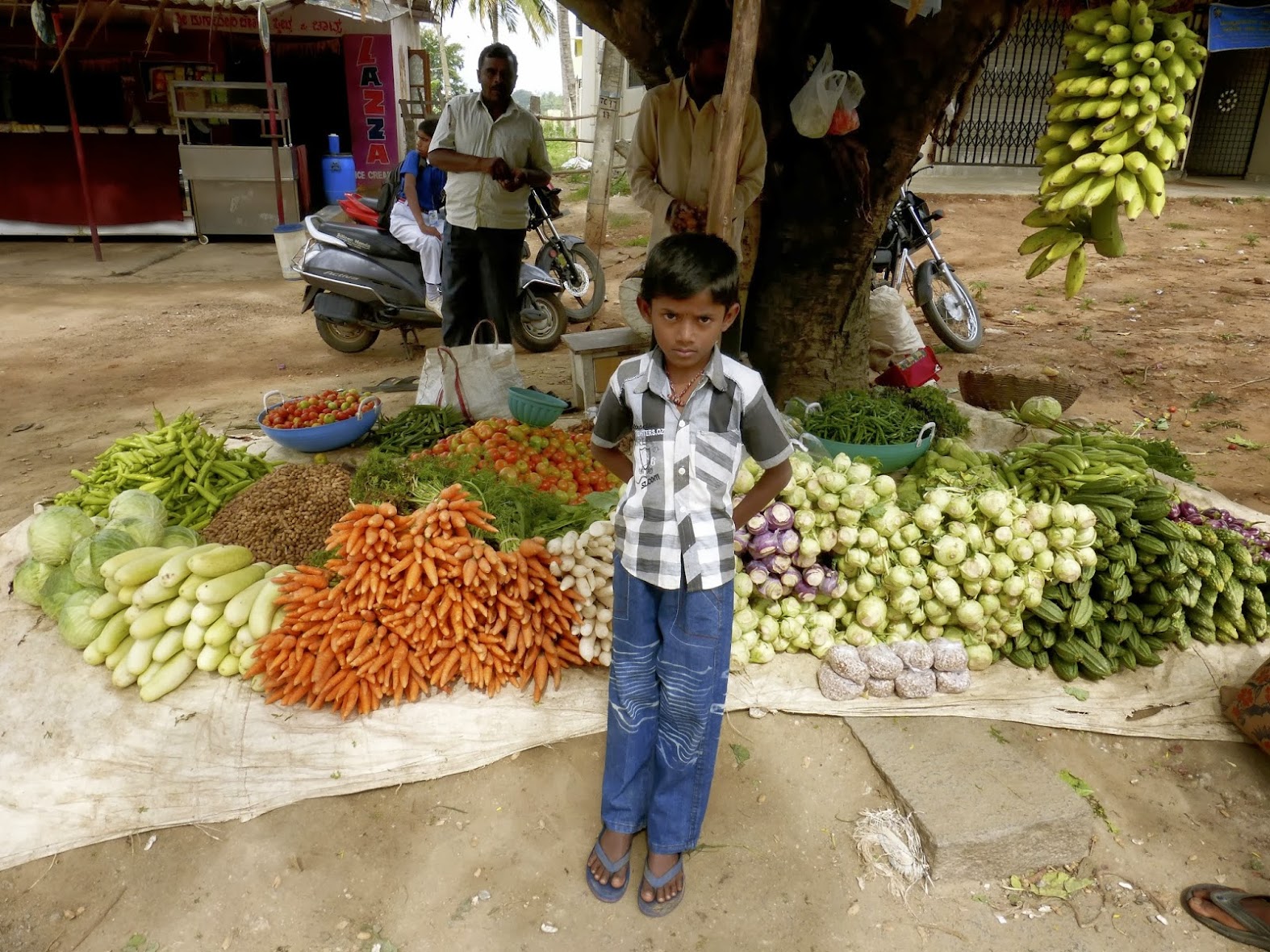 After saying goodbye to the group, I bought a bunch of fresh carrots from this roadside vendor and headed out once again 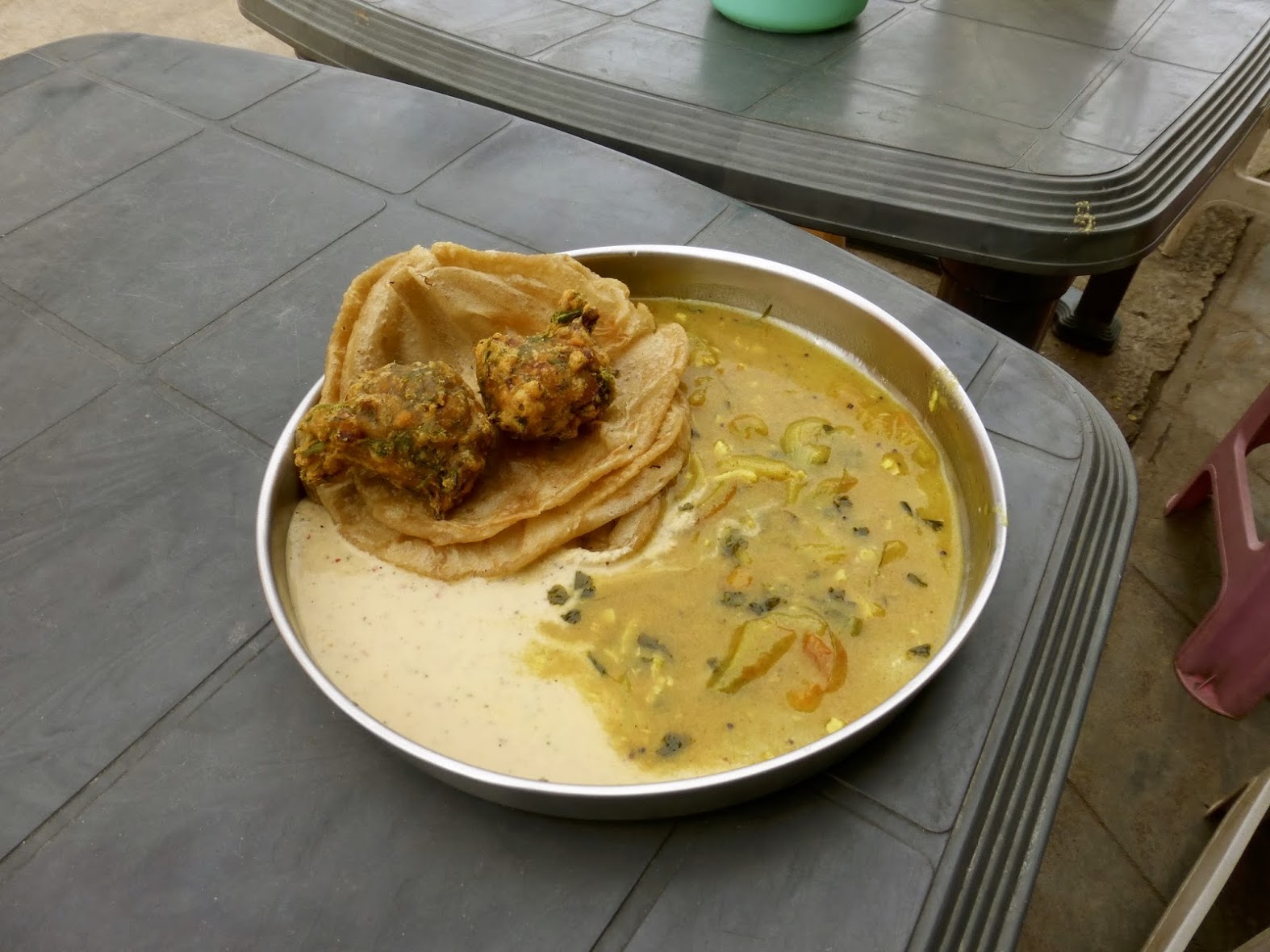 Another brief halt just before the Big Banyan Tree at a roadside restaurant run by an enterprising lady who cooked food in a small shop and laid out tables for weary passengers outside. The food was simple but really tasty! 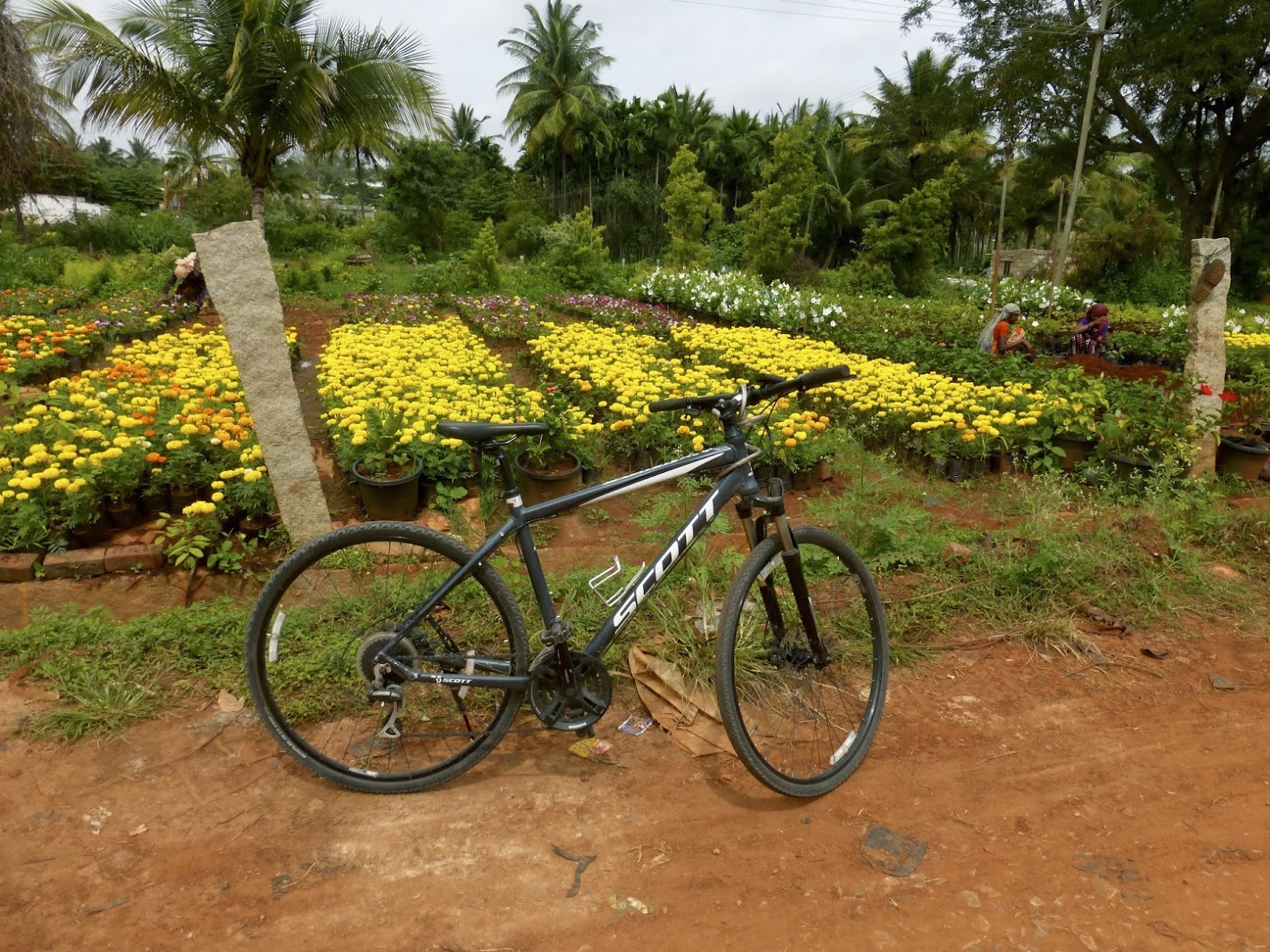 A short halt to click a snap with the flower beds that were lined along the road. Then I was off the Big Banyan Tree road and back on Mysore road. It was getting hot and sunny, and I did not take any other halt till I reached Bangalore, which was already quite crowded when I reached around 11:30 am

I reached back just after noon, with enough time to relax, freshen up and leave for the airport to catch my flight back to Mumbai – another productive visit to Bangalore – for both work and pleasure!