Ambernath was just another station that one passed on the way from Mumbai to Pune that came between Kalyan and Neral (actually between Ulhasnagar and Badlapur). However as part of the Mumbai Historical Sites Cycling Association, while researching into historical sites in and around Mumbai, I found references of an ancient Shiva Temple located in Ambernath, that seemed to be at the ideal distance of approximately 47 kilometers from Andheri. So one of the weekends in October this year, I set off early one morning with my cycle to investigate and find this ancient temple.

The route from Andheri passes via Powai lake and Airoli creek to Thane Belapur road, then crosses the Parsik hills via Shilphata to the Kalyan-Shilphata road and then on the pipeline road towards Ambernath 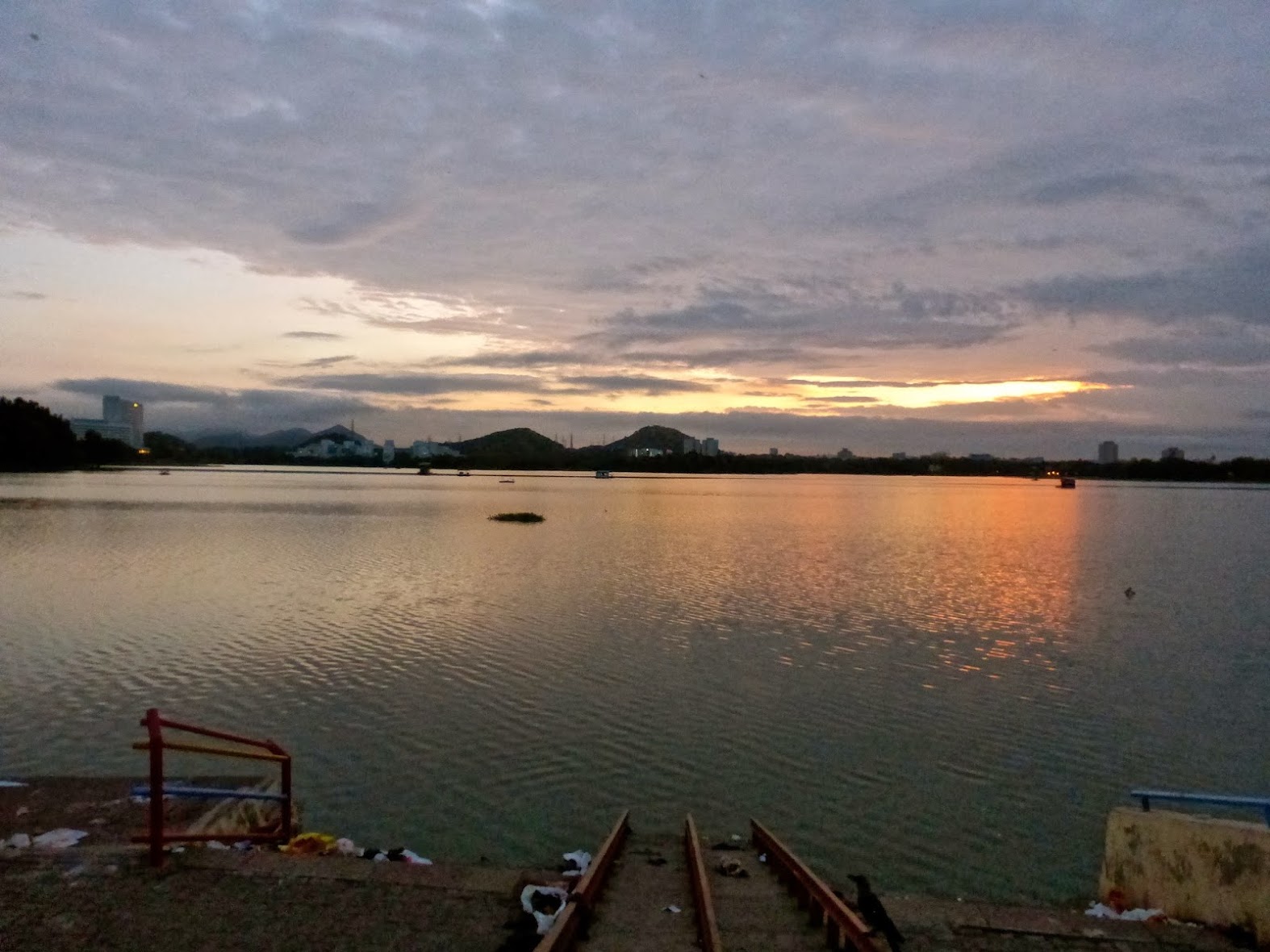 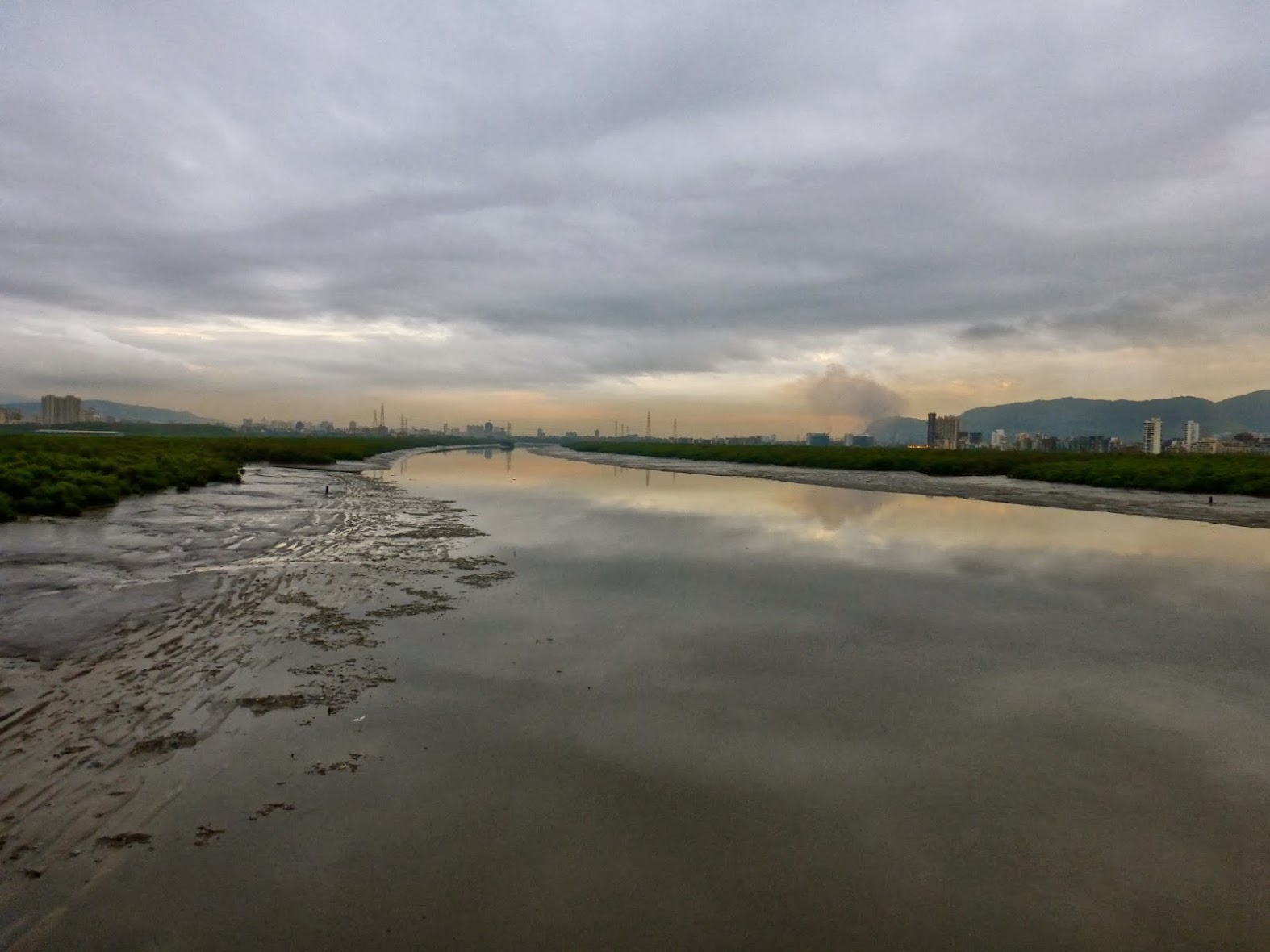 An awesome downhill road leads from Powai to the Eastern Express Highway from where the Airoli bridge provides this amazing view of the Thane creek below and the carpet of clouds above, and the Ulhas river near the horizon 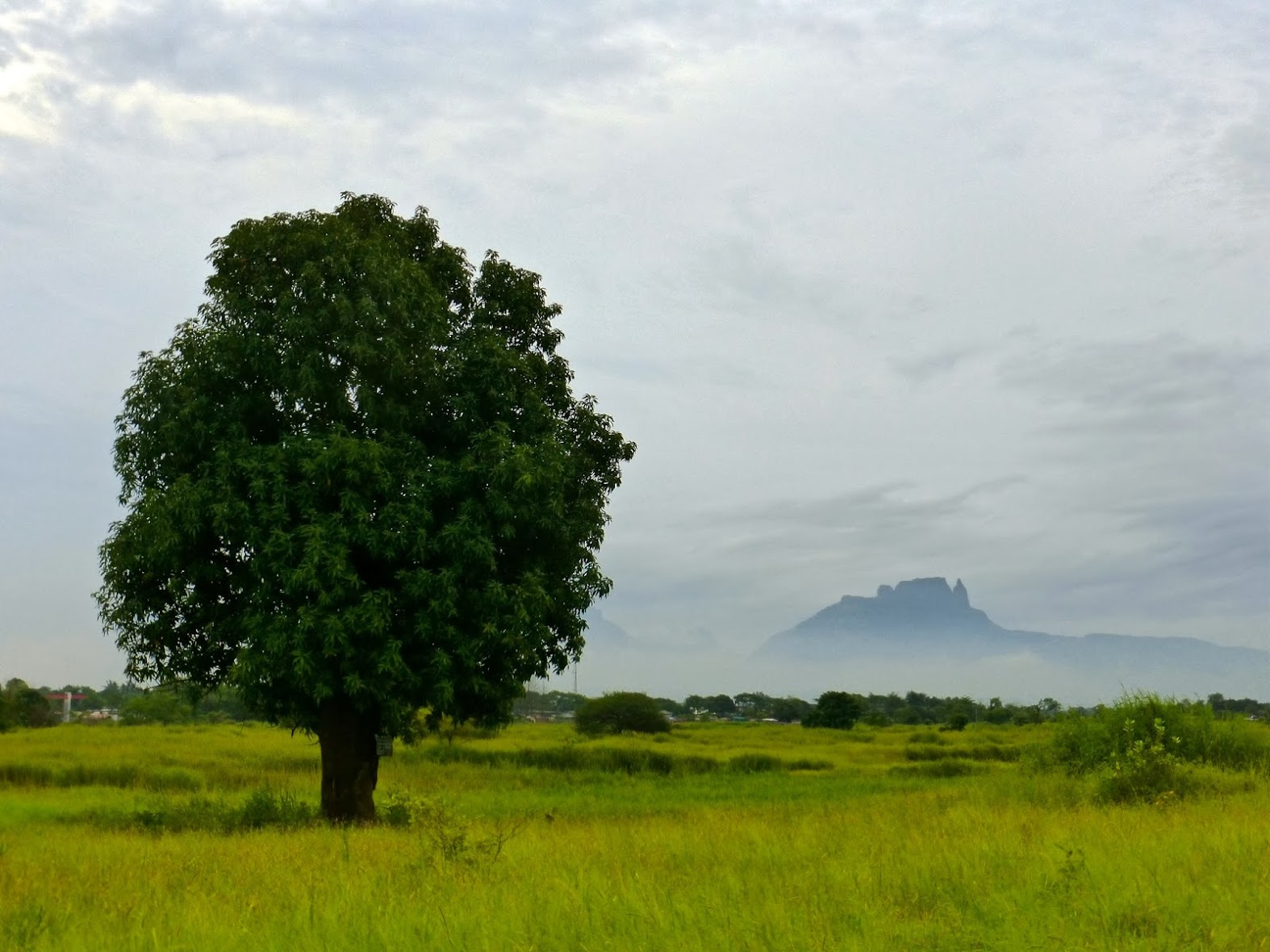 As you turn onto the pipeline road towards Ambernath, on your right you can see Malanggad peak rising up through the fog 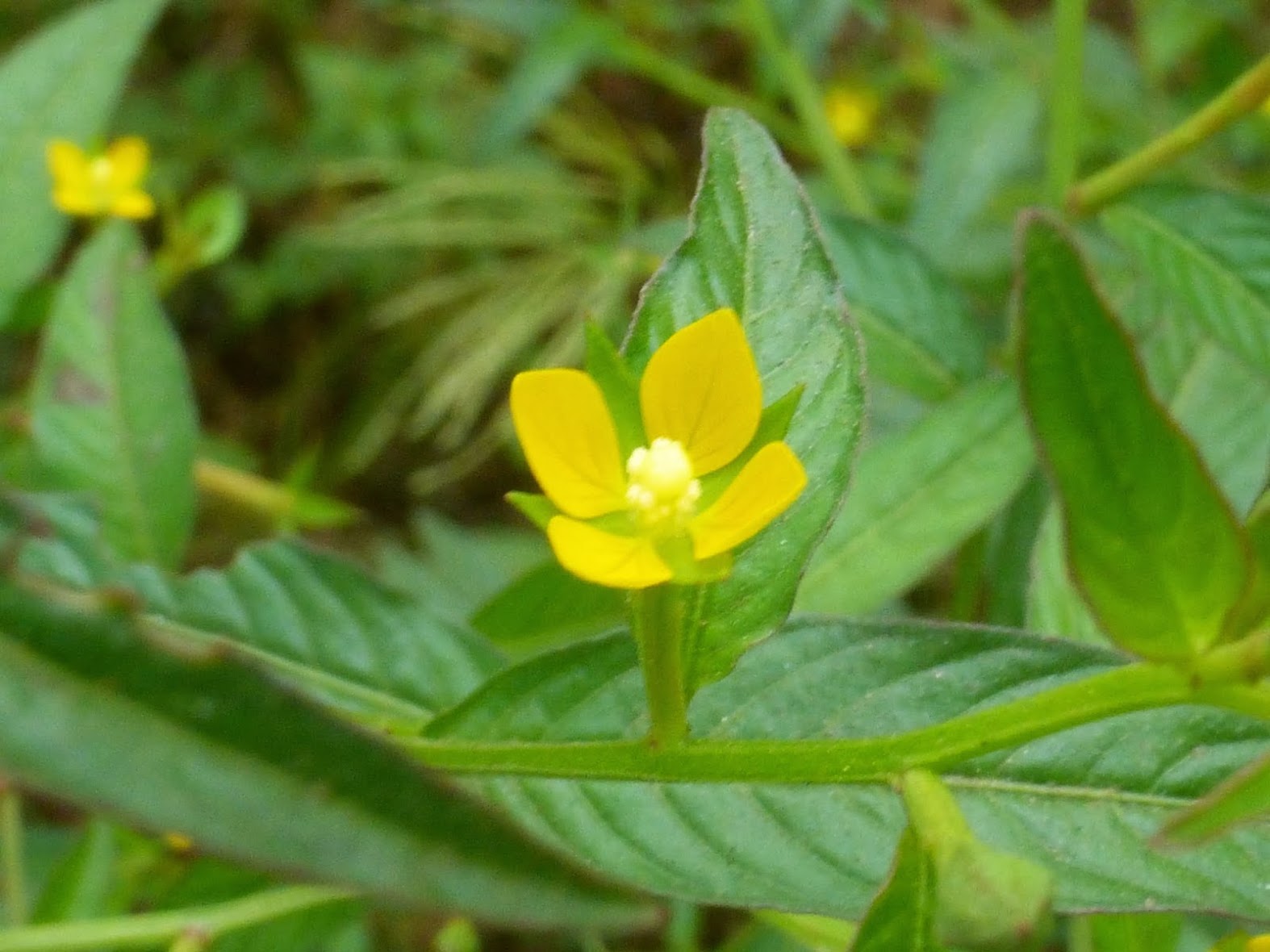 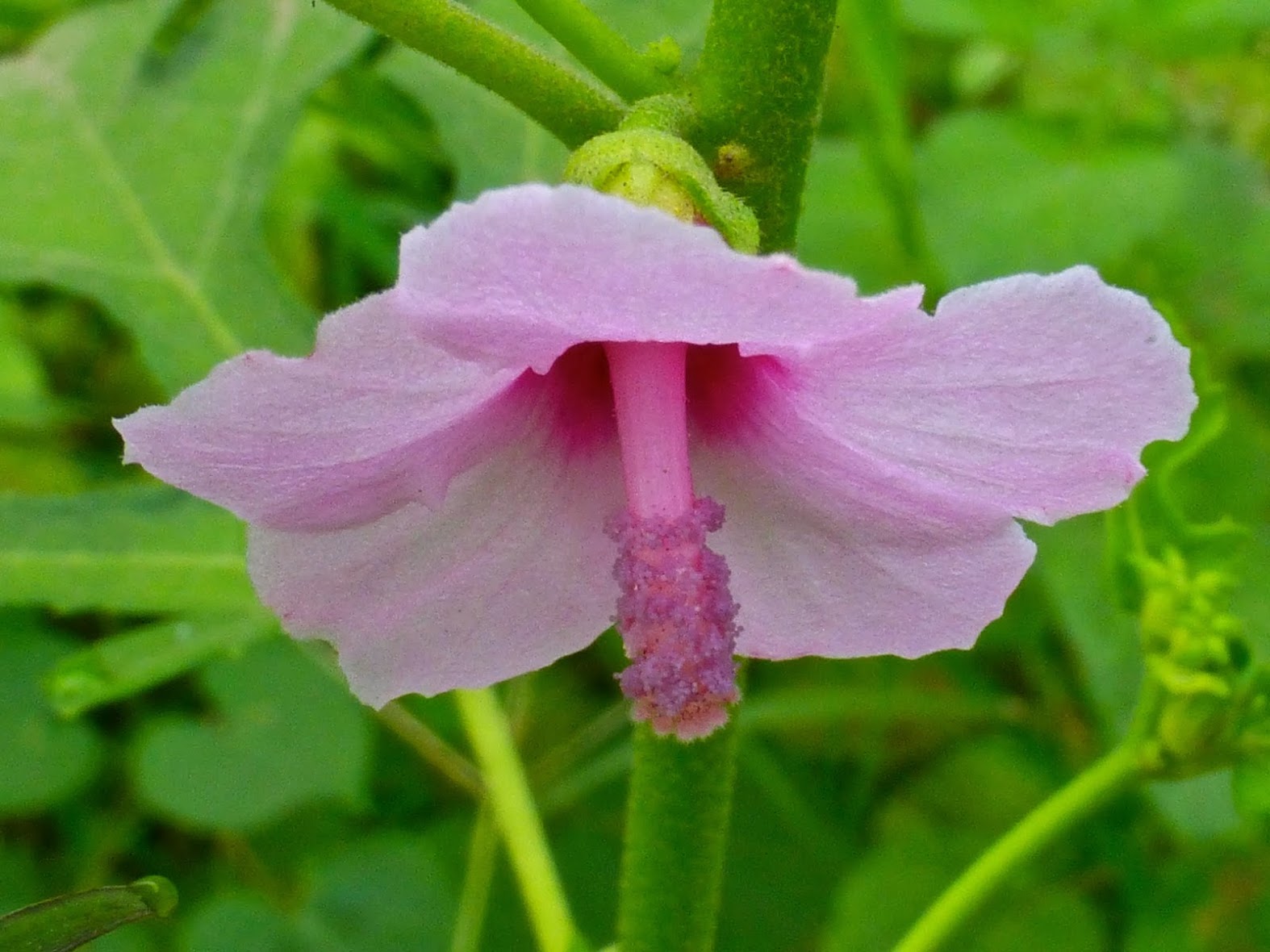 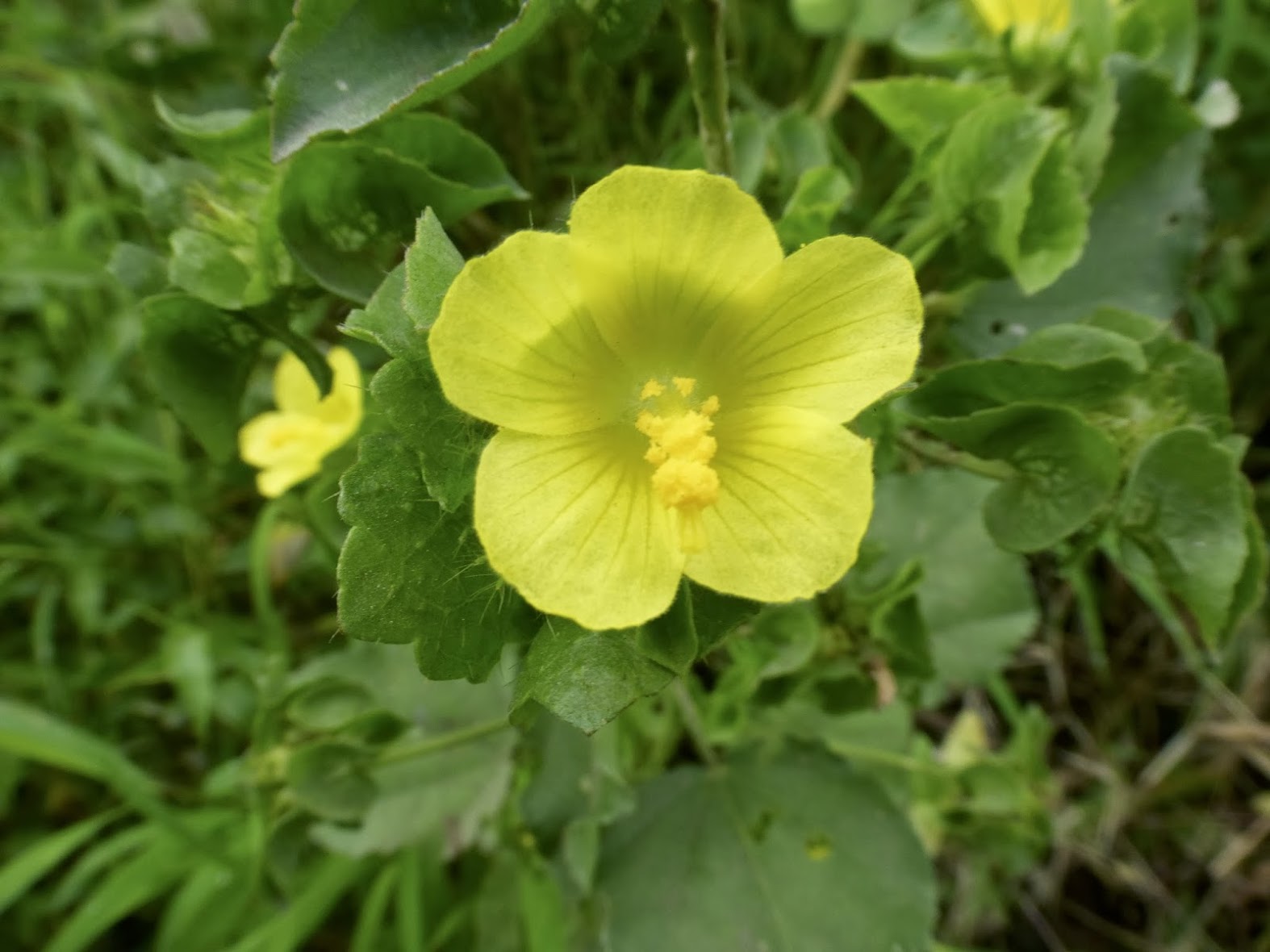 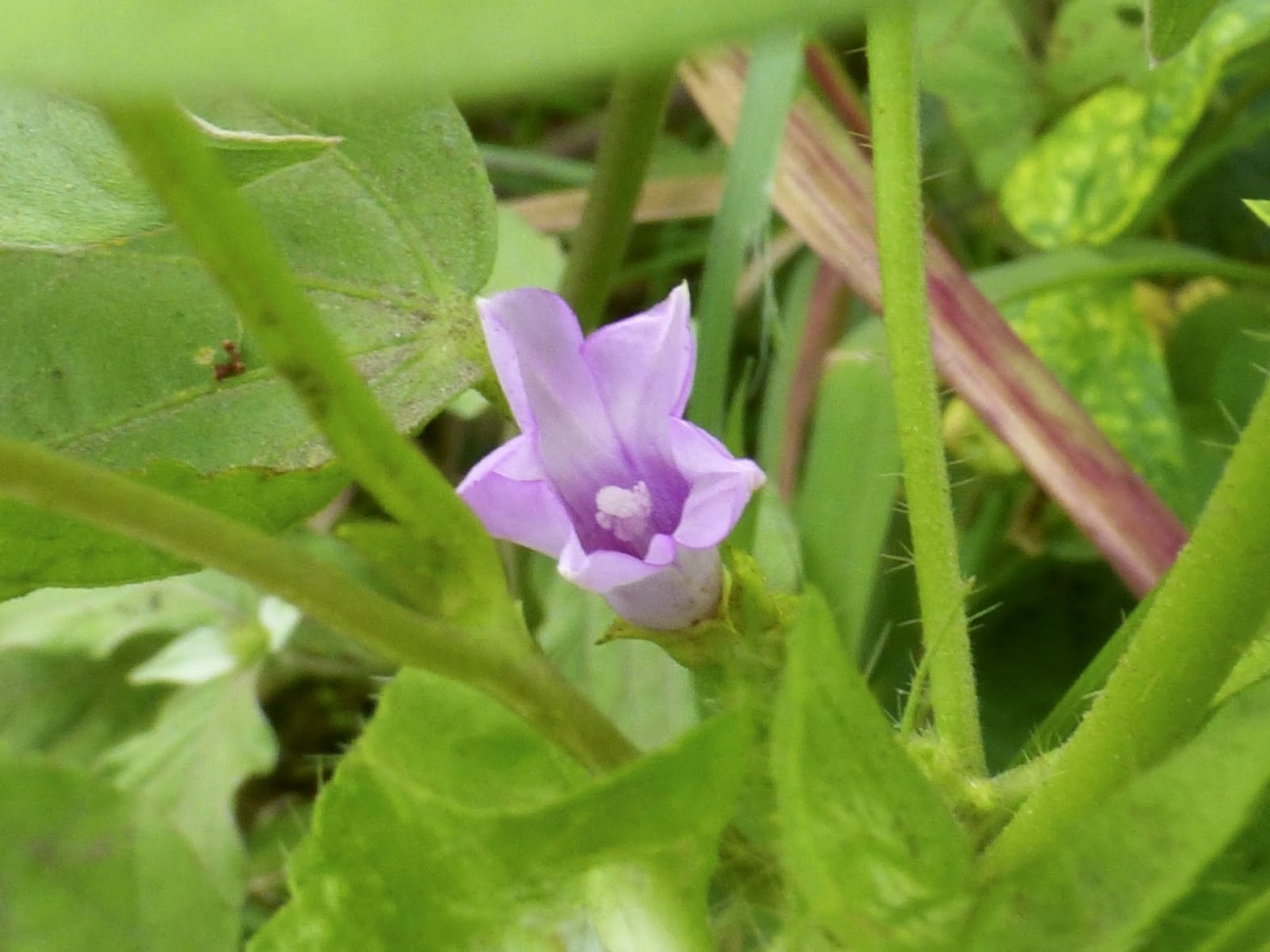 Thanks to the extended monsoon this year, the area is full of wild flowers of all shapes and sizes. There was a nice cool breeze that kept the grass swaying to its beats 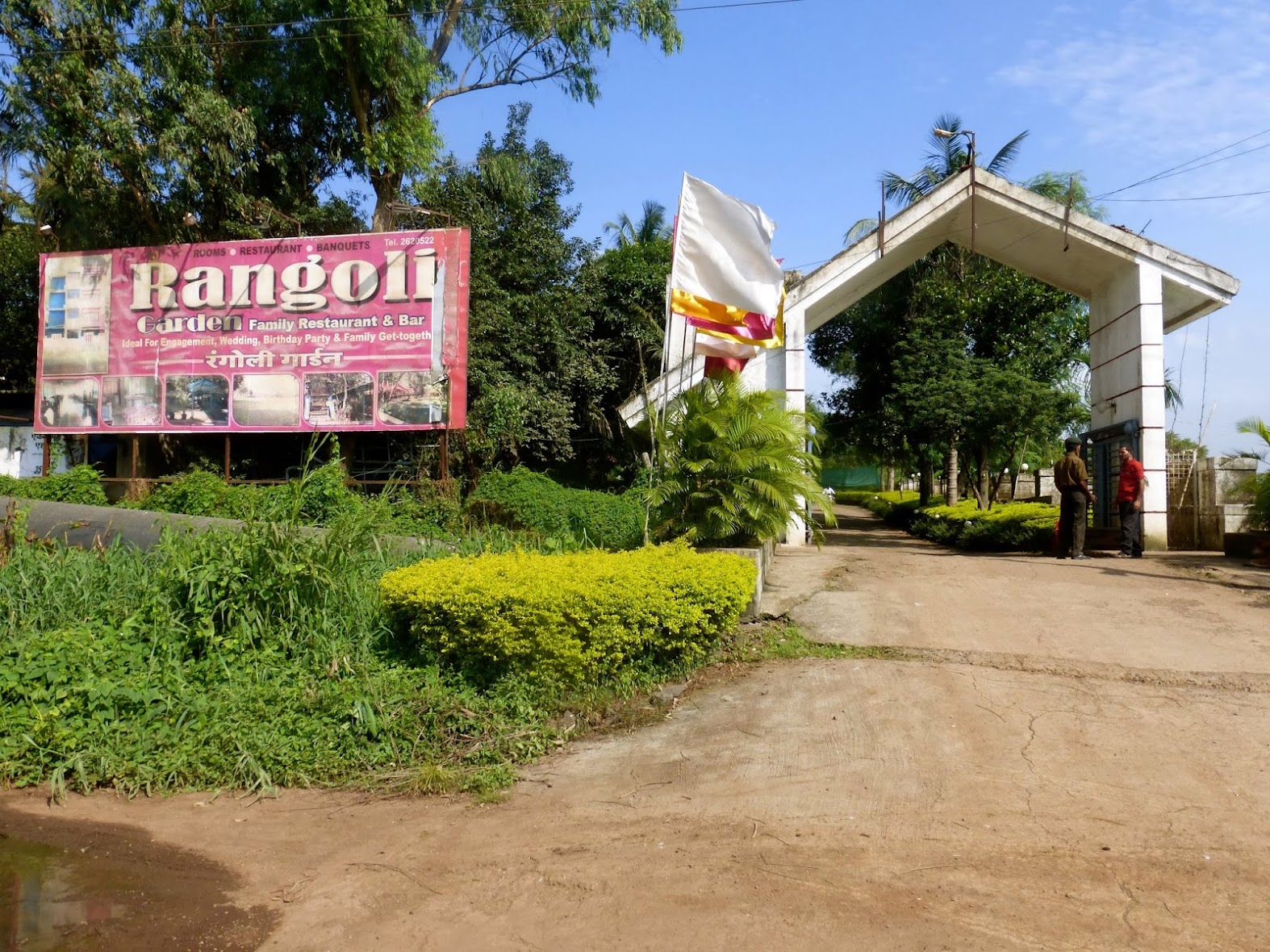 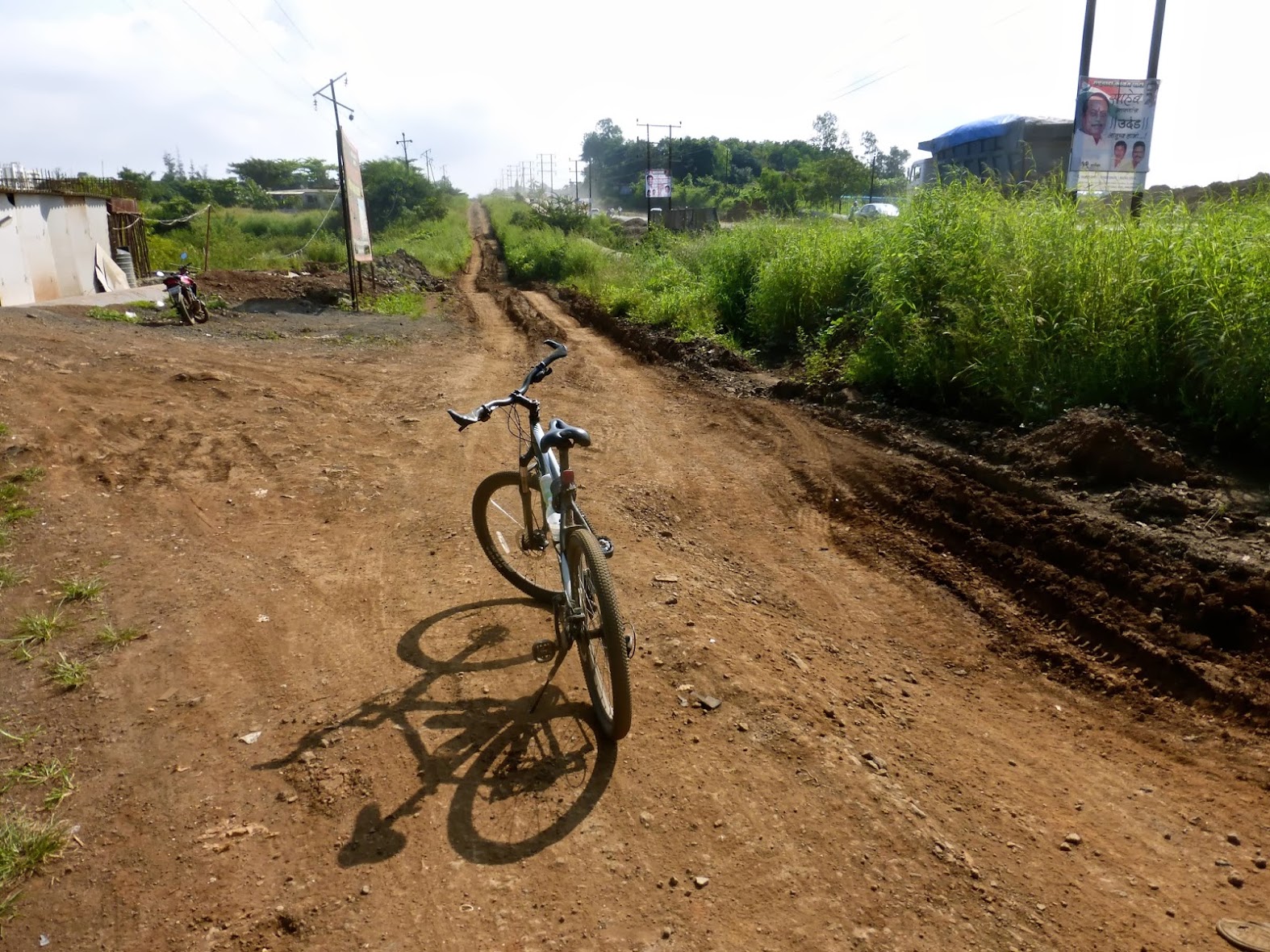 About 10 km on the pipeline road, you will see Rangoli restaurant on the left, with a dirt track road leading into the fields behind it. This is a short cut to reach the Shiva Temple. Alternatively, you can ride ahead on the tar road and take a left at the next junction on MIDC road towards the temple 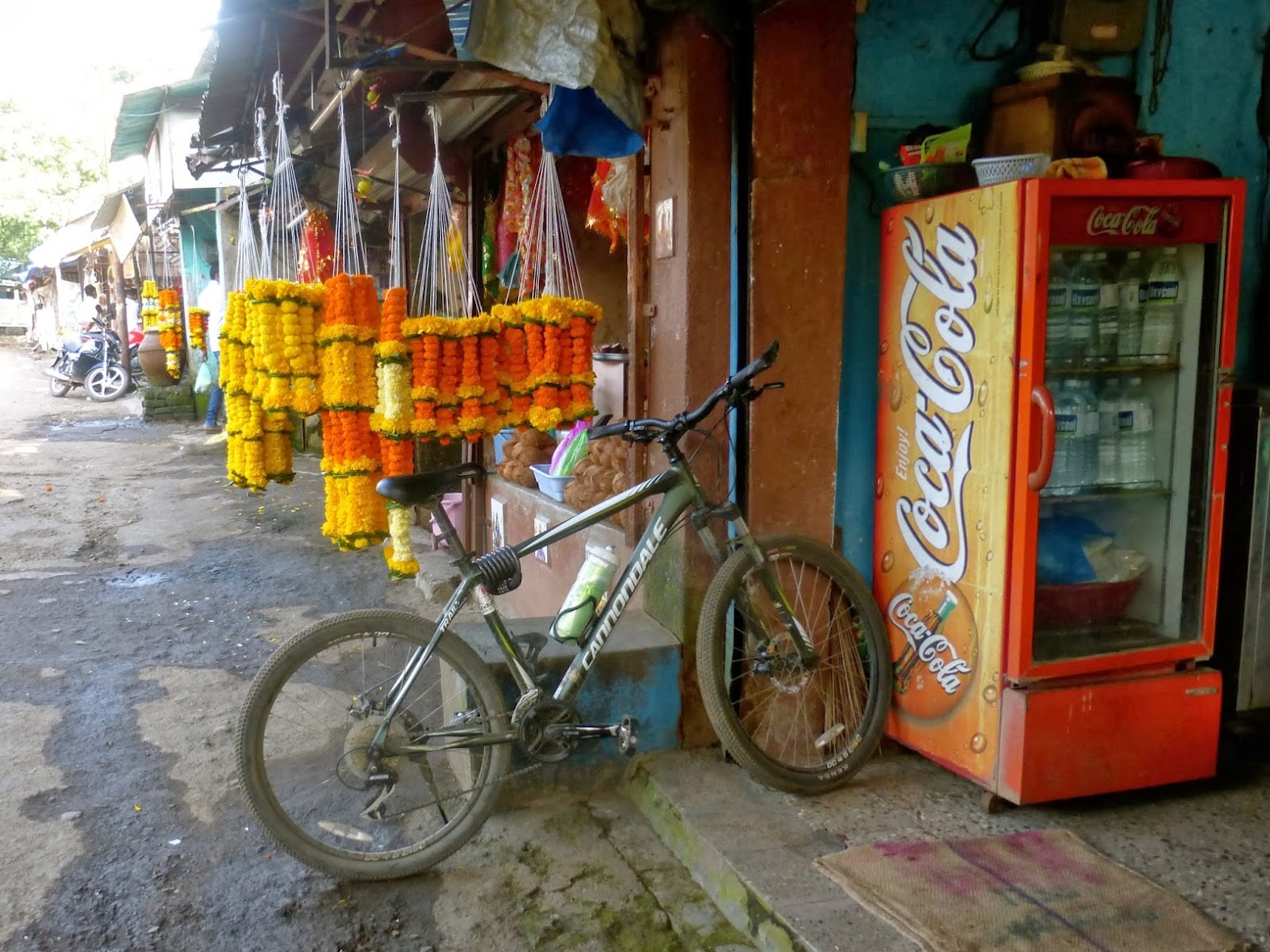 I had to ask for directions to actually find the temple that is clustered in the middle of the town next to the Waldhuni river, which is a tributary to the Ulhas river that flows through Kalyan. I parked my cycle in one of the shops that provide flowers and other materials for devotees 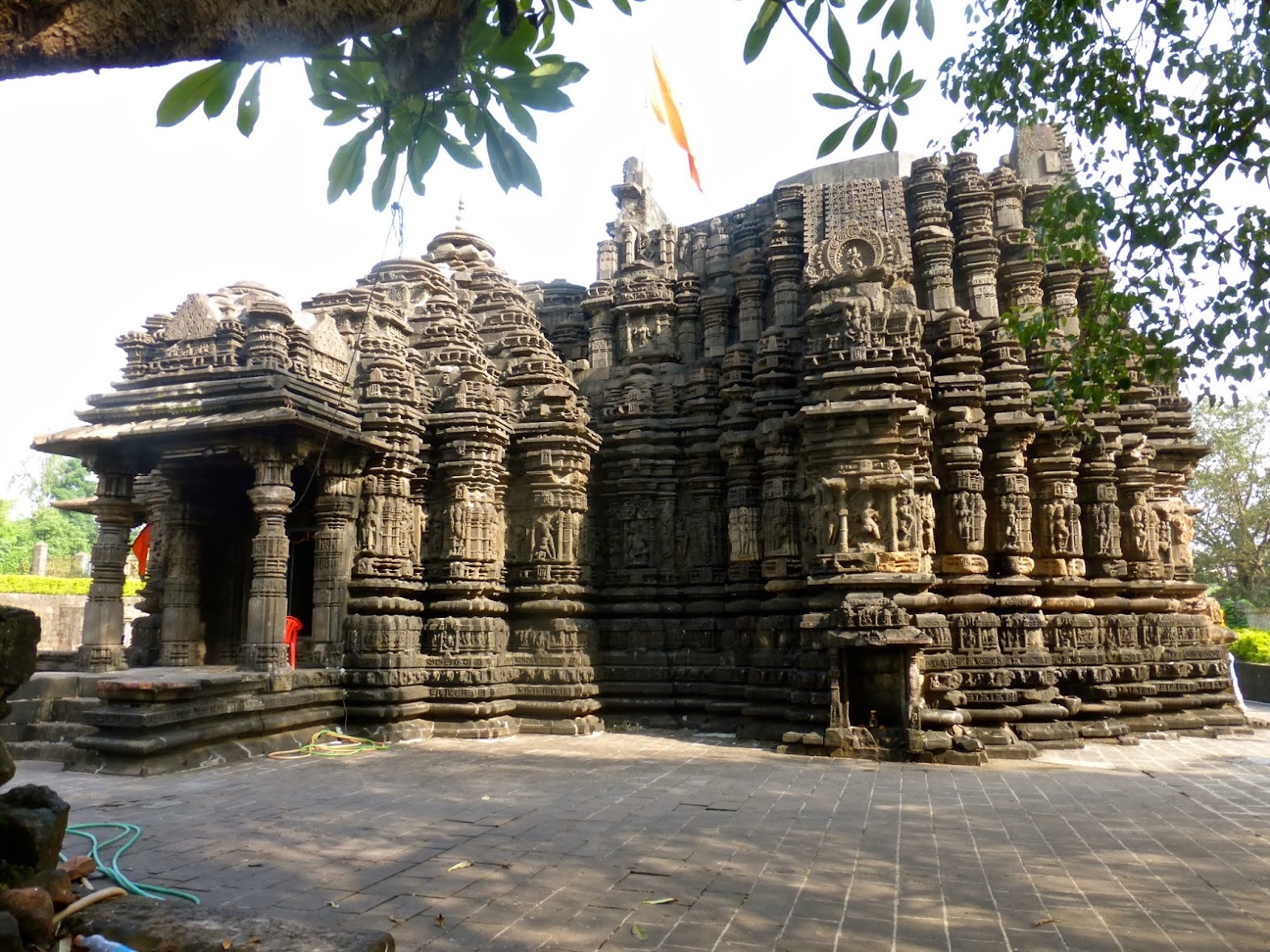 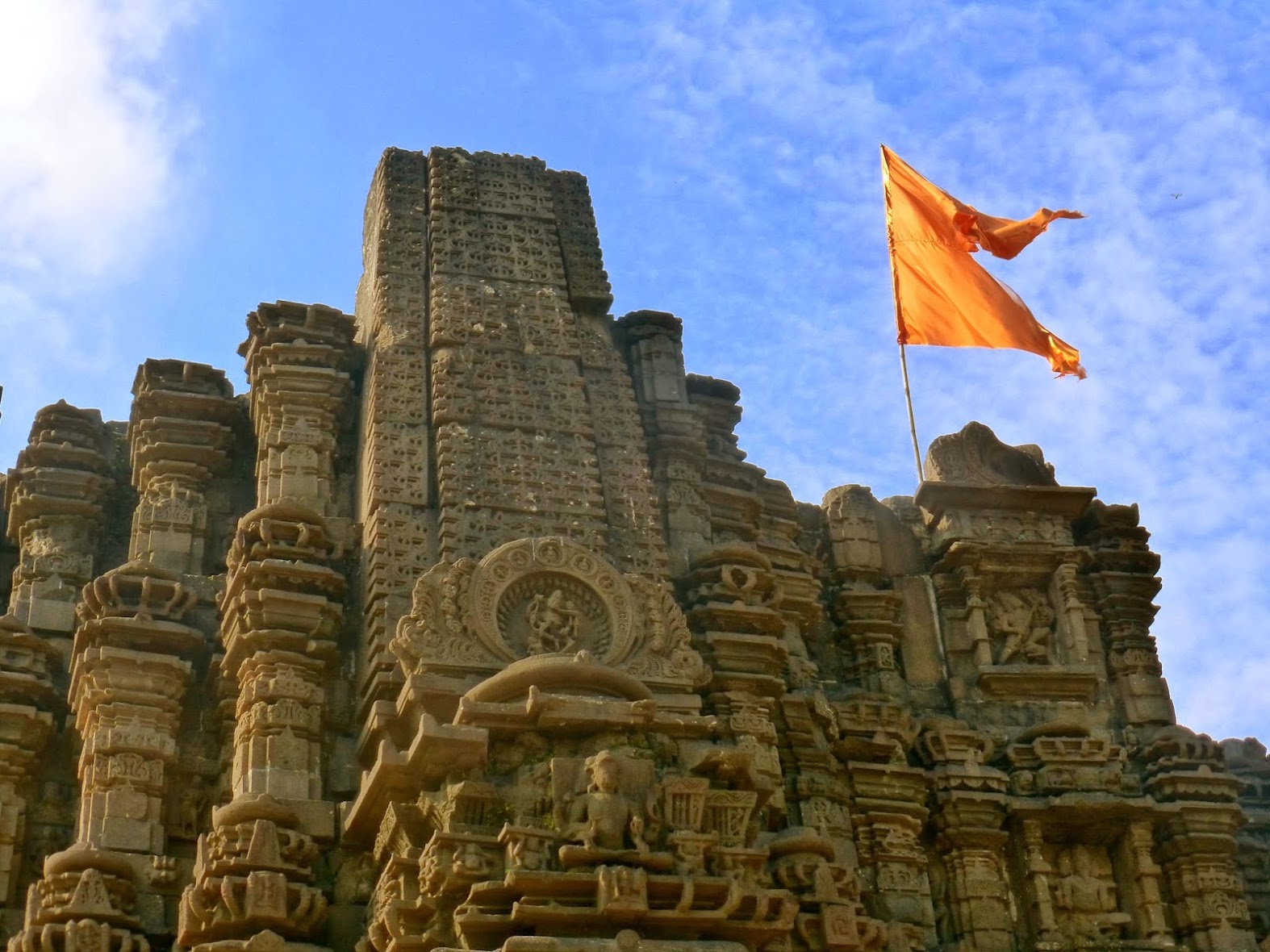 This temple is built in around 1000 AD in the Vesara architecture style that combines two different styles. The northern style, technically called Nagara, is distinguished by the curvilinear towers. The southern style, known as the Dravida, has its towers in the form of truncated pyramids. The Vesara style combines both these styles and one can see both type of features 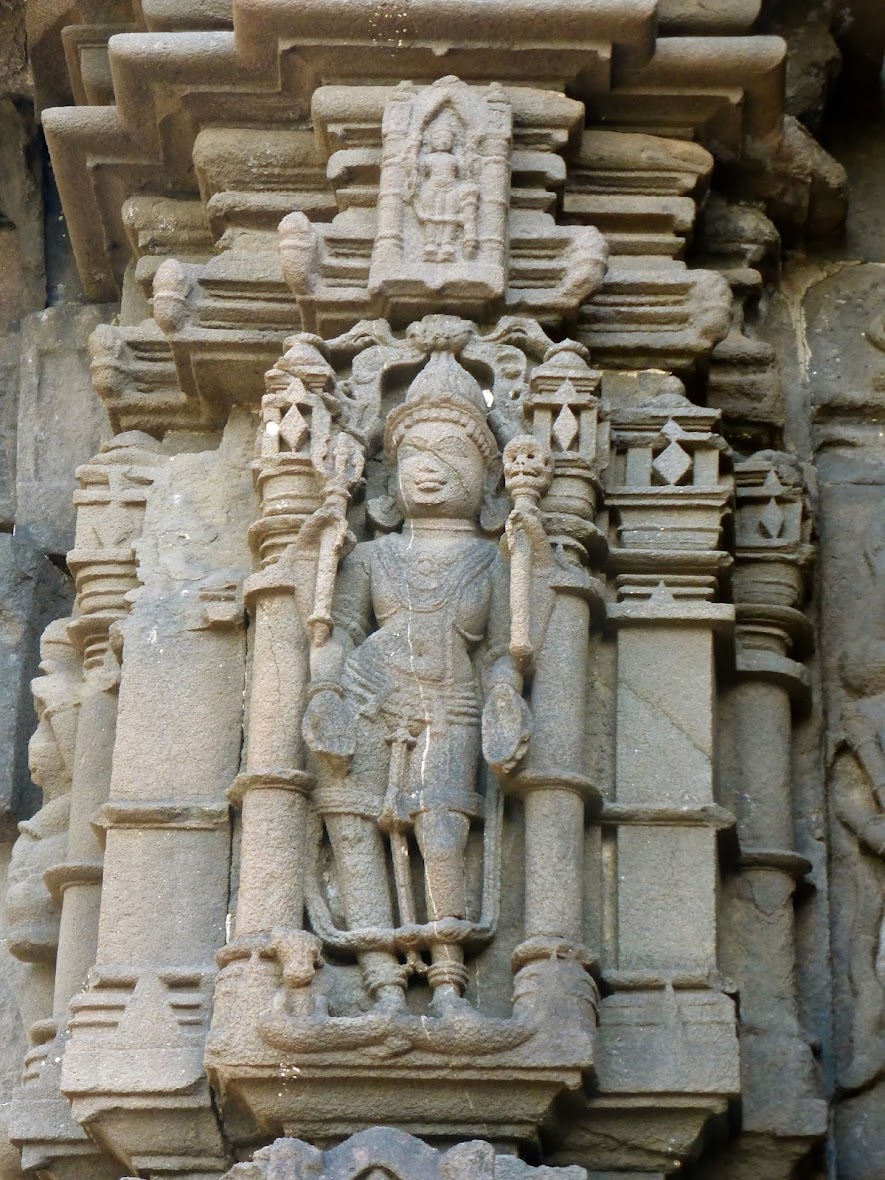 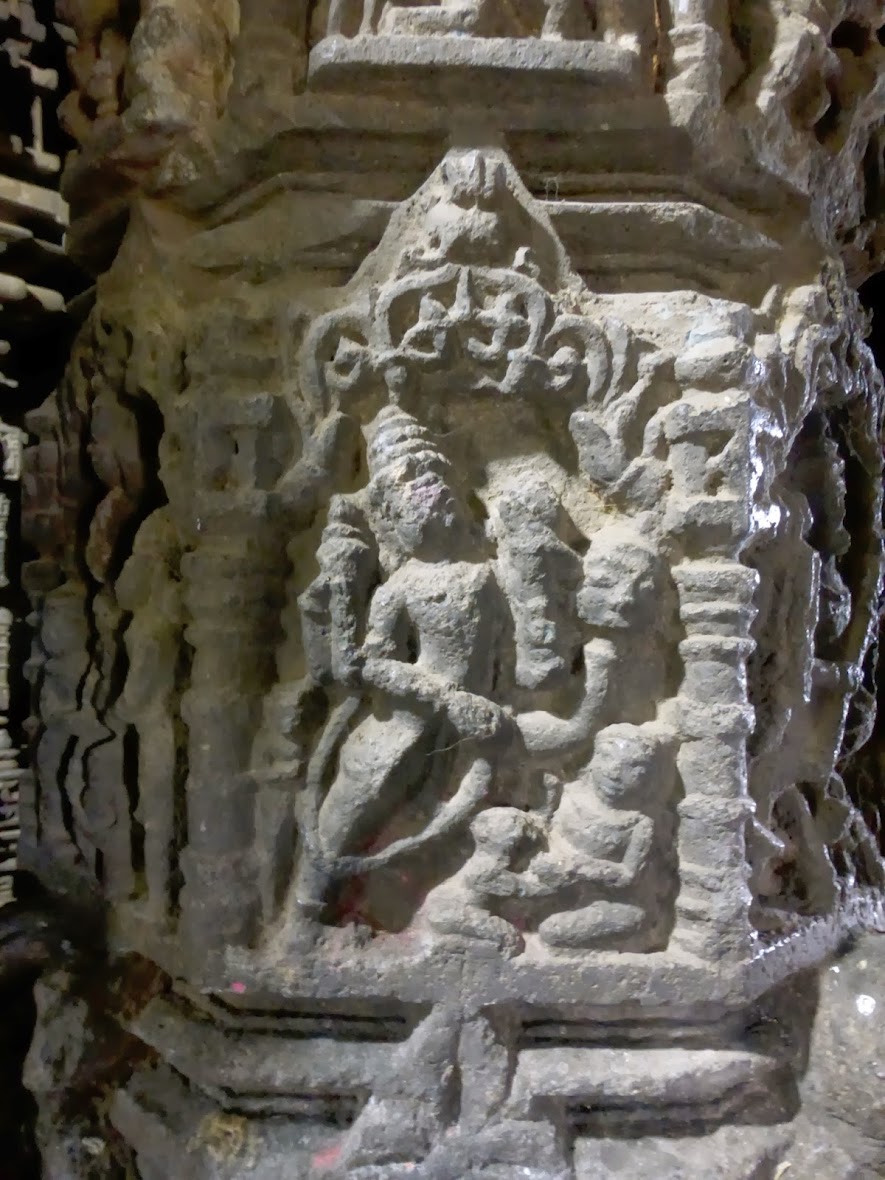 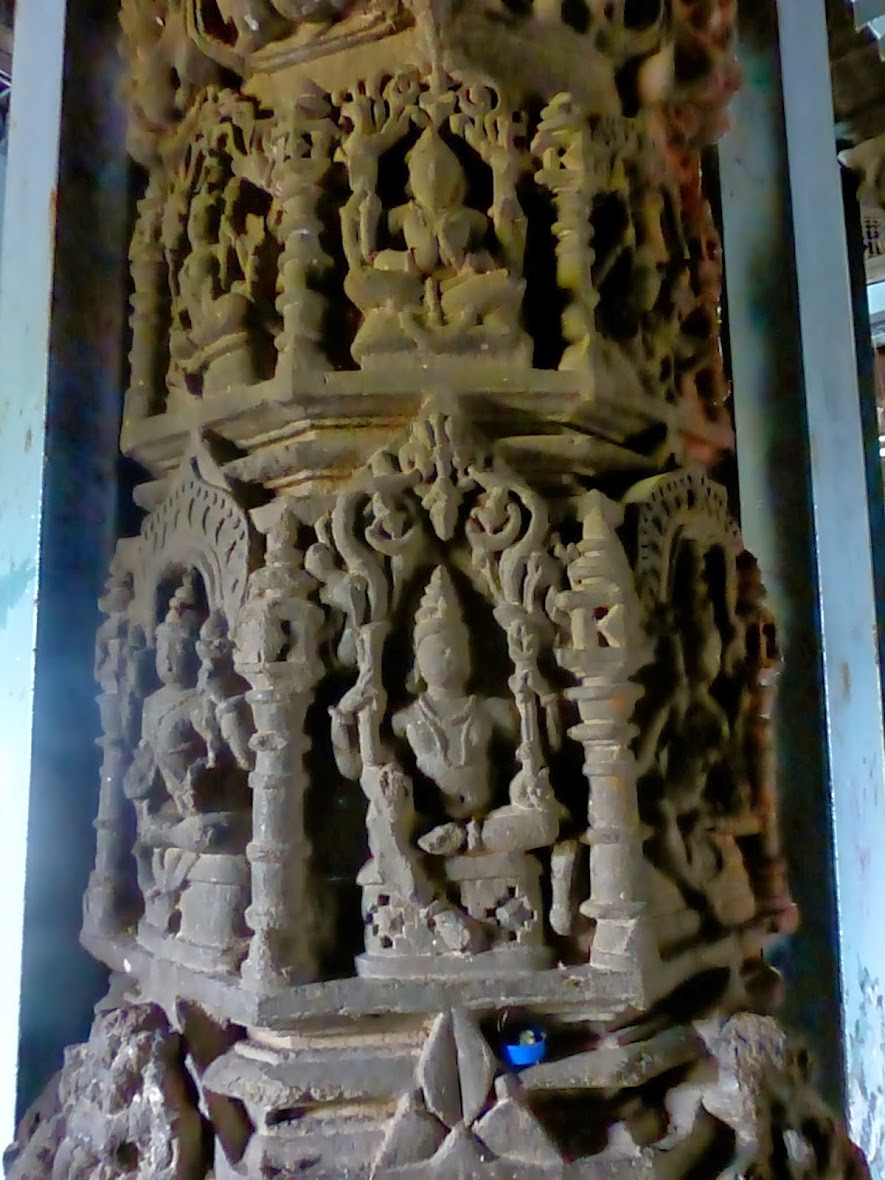 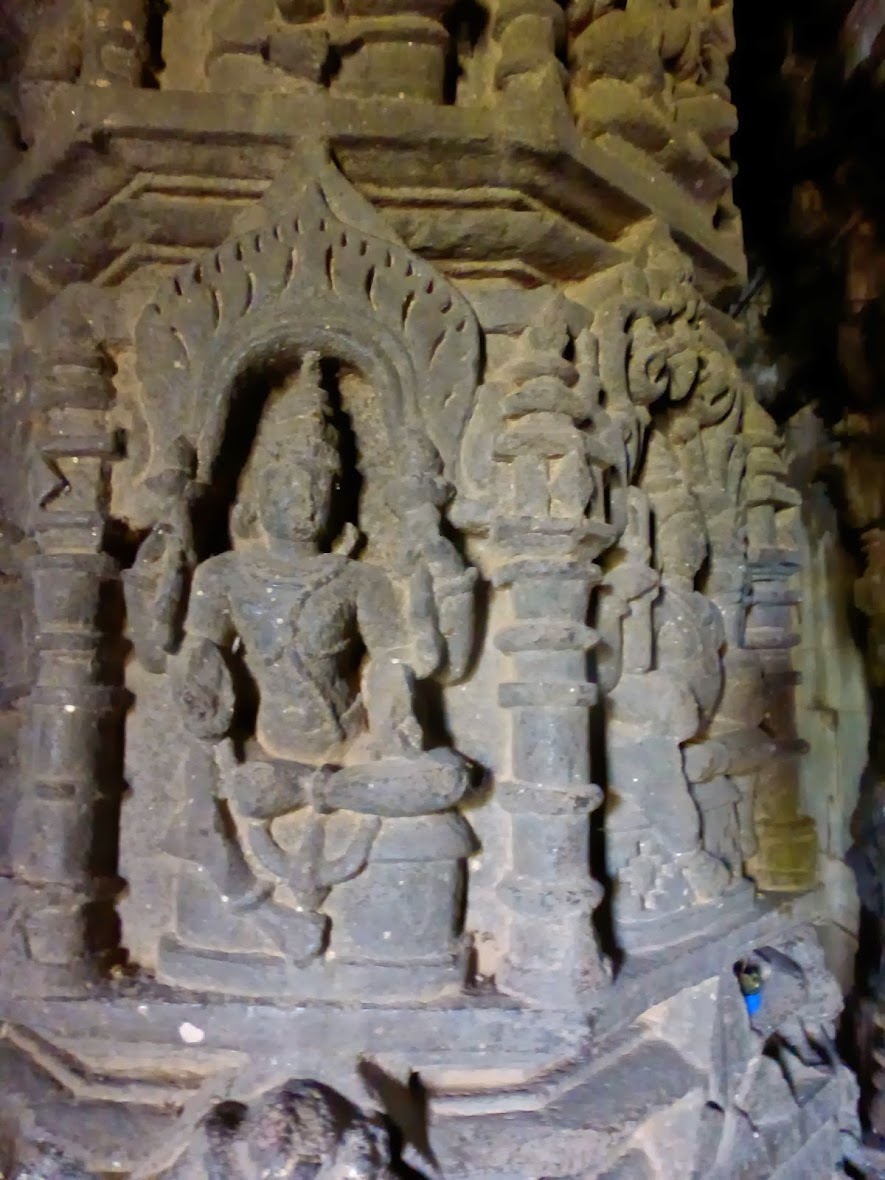 There are exquisite carvings both outside and inside the temple. The sculptures are all of Hindu mythological origin, predominantly in the Shiva theme. On the outside, there is a ring of sculptures at eye level all around the temple, while inside, there are sculptures on pillars, inner walls and the roof 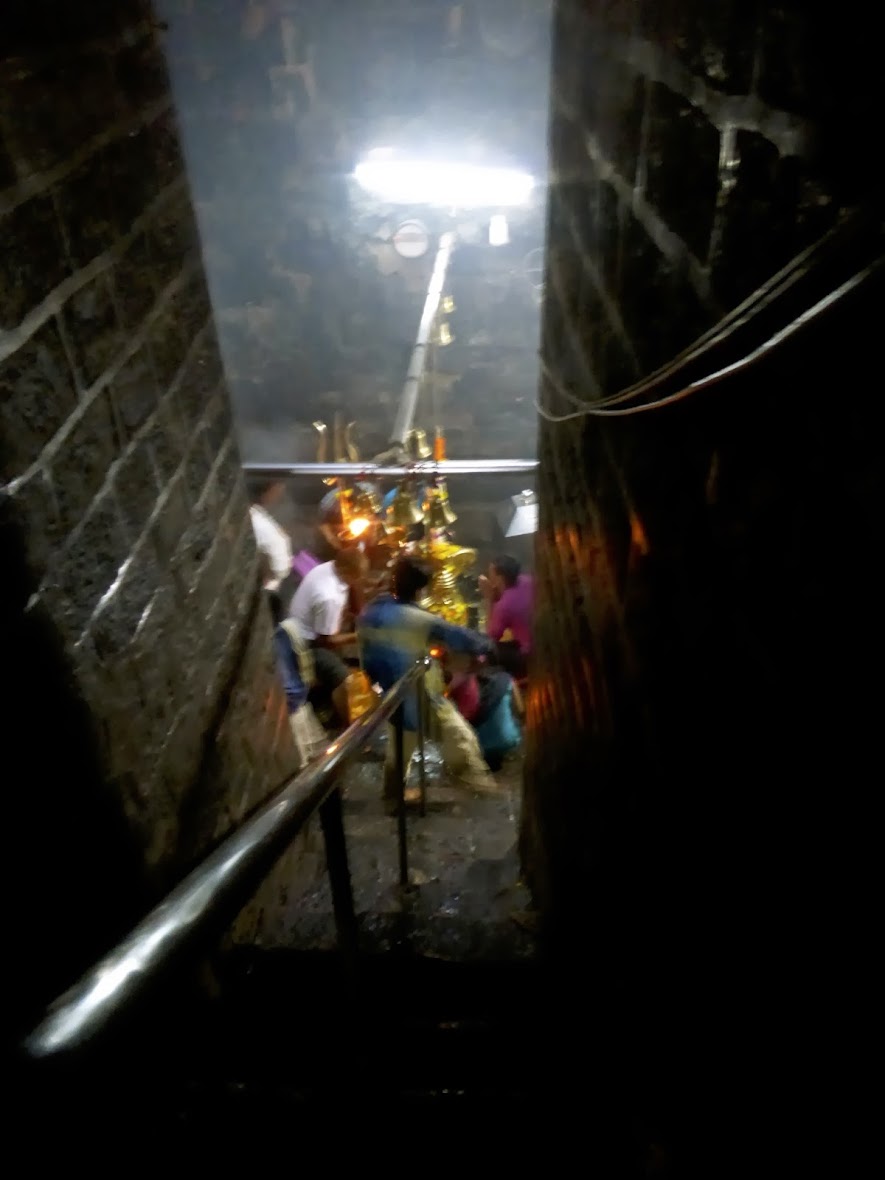 The inner sanctum is located at a lower level inside the temple, and one has to climb down 20 steps to go down in the Garbhagriha – or interior of the sanctum sanatorium 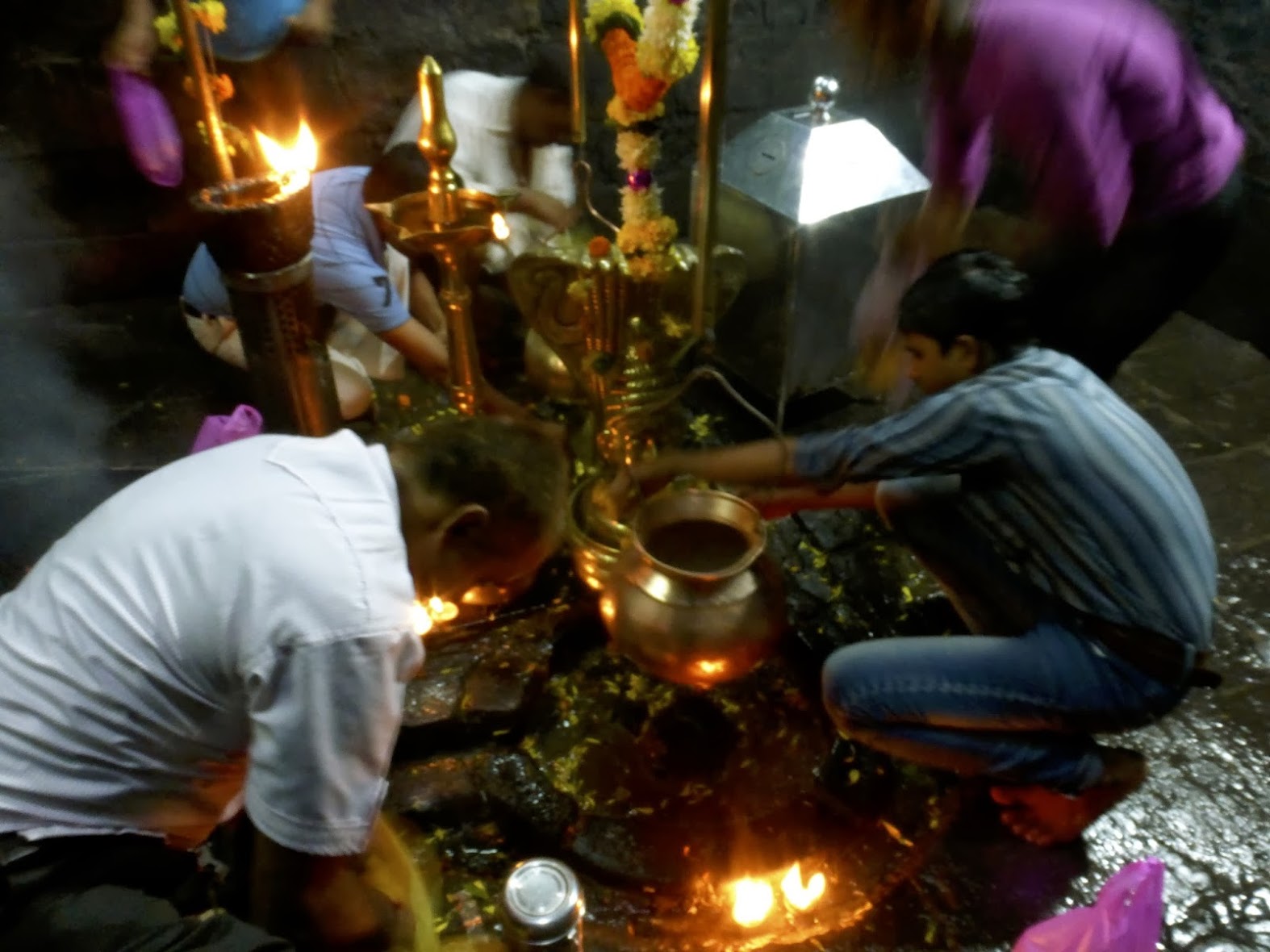 Located in the center of the Garbhagriha is the “Swayambhu” or self-manifested Shiva Linga, and this is open to the sky, probably due to the top of the temple being destroyed or disintegrated. There was a stream of visitors who were busy praying and placing flowers, coconuts and other offerings to the Linga 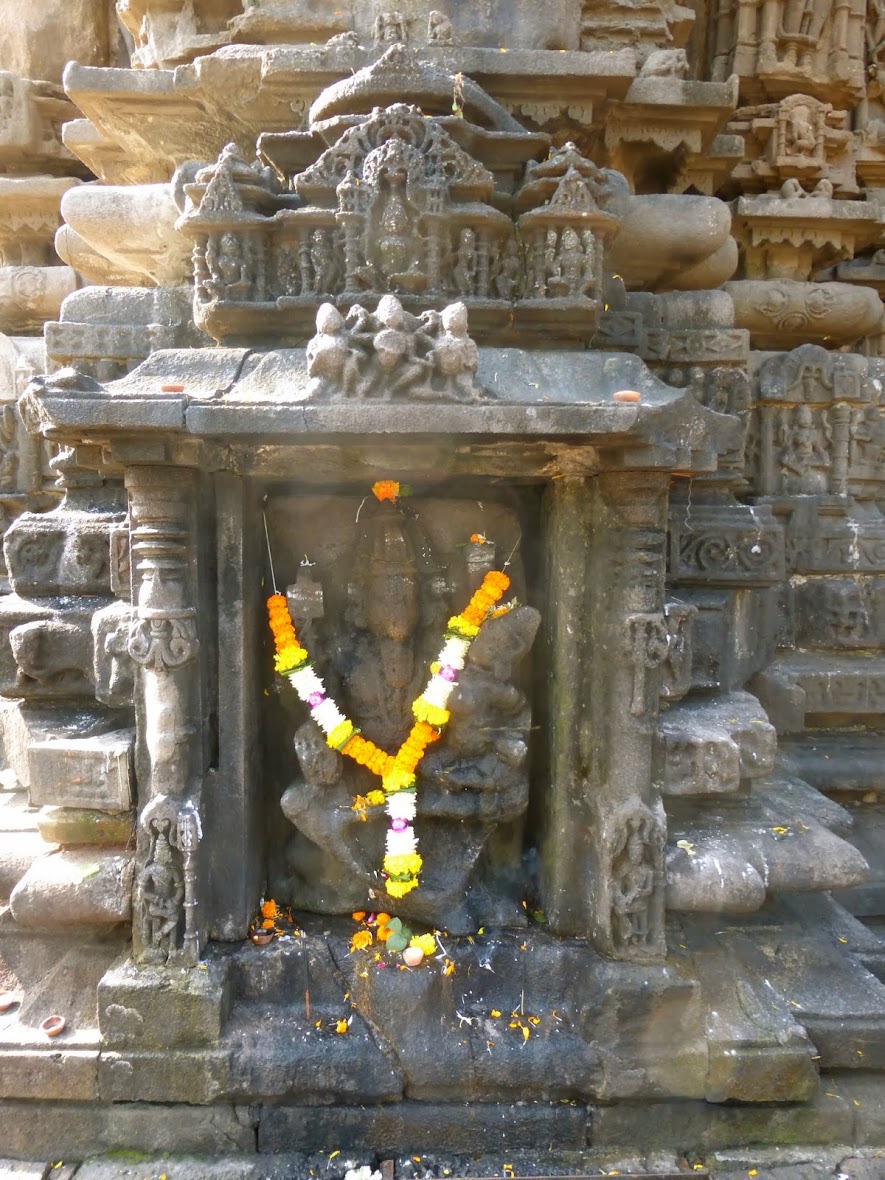 There is also a small altar on the outside of the temple with the image of a six-armed Varahi. With the head of a sow, Varahi is the shakti (feminine energy, or sometimes, consort) of Varaha, the boar Avatar of the god Vishnu. She is depicted holding a danda (staff of punishment), khetaka (shield), khadga (sword), and pasha (noose) in four hands and the two remaining hands being held in Abhaya and Varada Mudra (“blessing gesture”). She also holds a shakti and hala (plough). She is depicted holding a child sitting on her lap 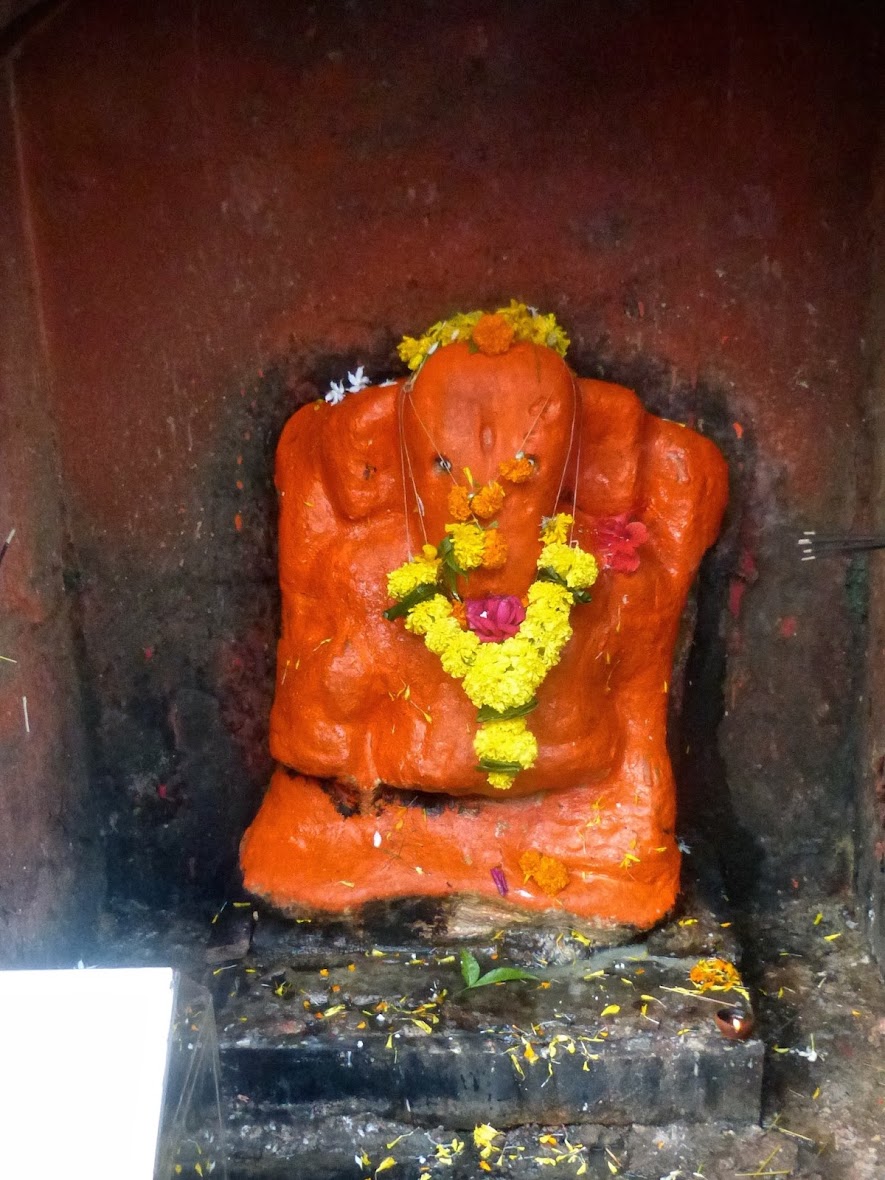 On the southern end of the temple complex, a small sanctorium holds the idol of Lord Ganesh, typically covered with vermillion paint. Behind this little sanatorium is a small ceremonial pond with the typical square boundaries 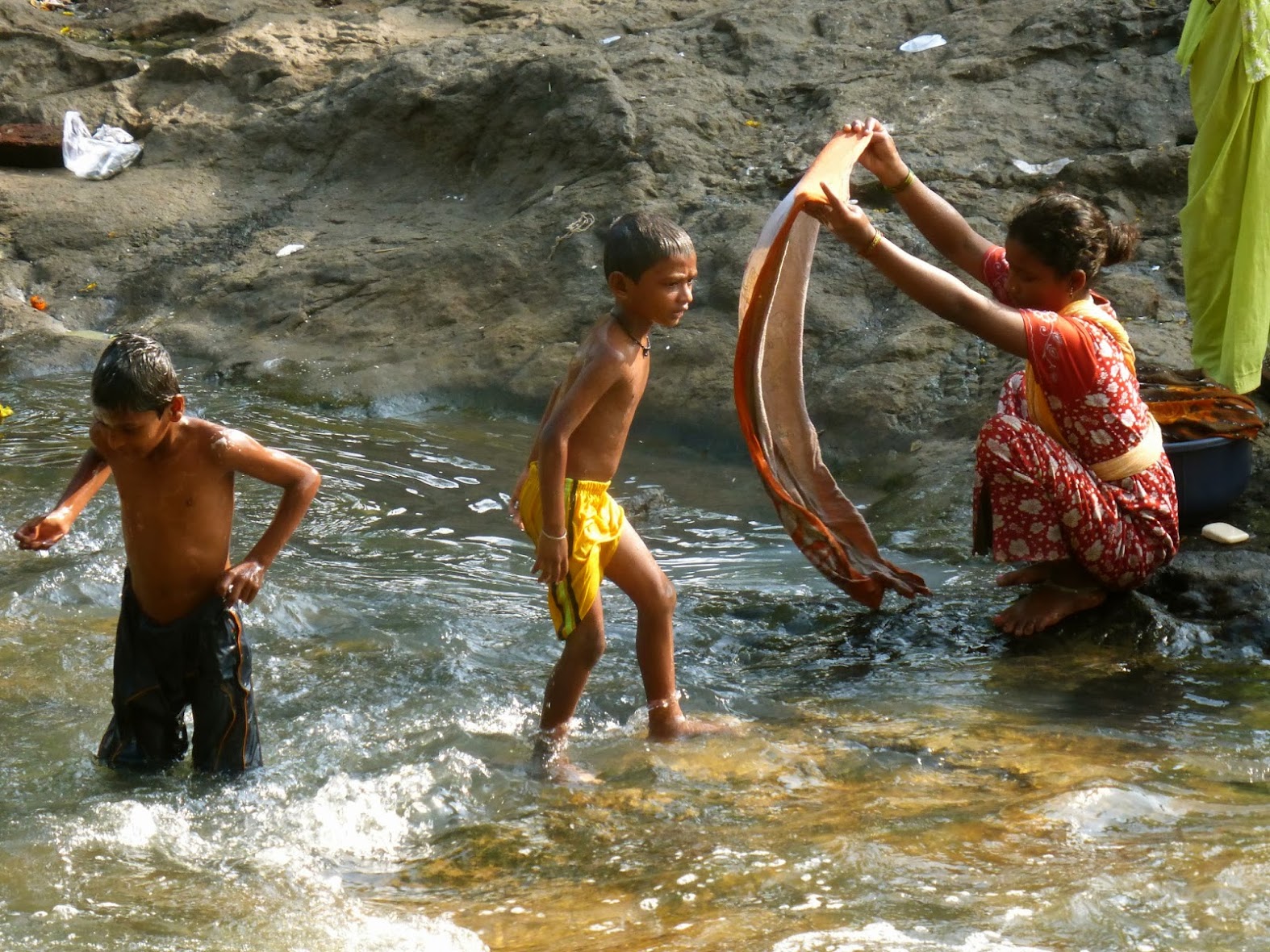 Flowing along the temple to the east is the Waldhuni river, also called Vadavan river that is one of the seven tributaries of the Ulhas river. Today, this river is quite narrow and not very clean. But along the banks I could see a lot of activity with women washing clothes and some kids having a blast dipping in the water 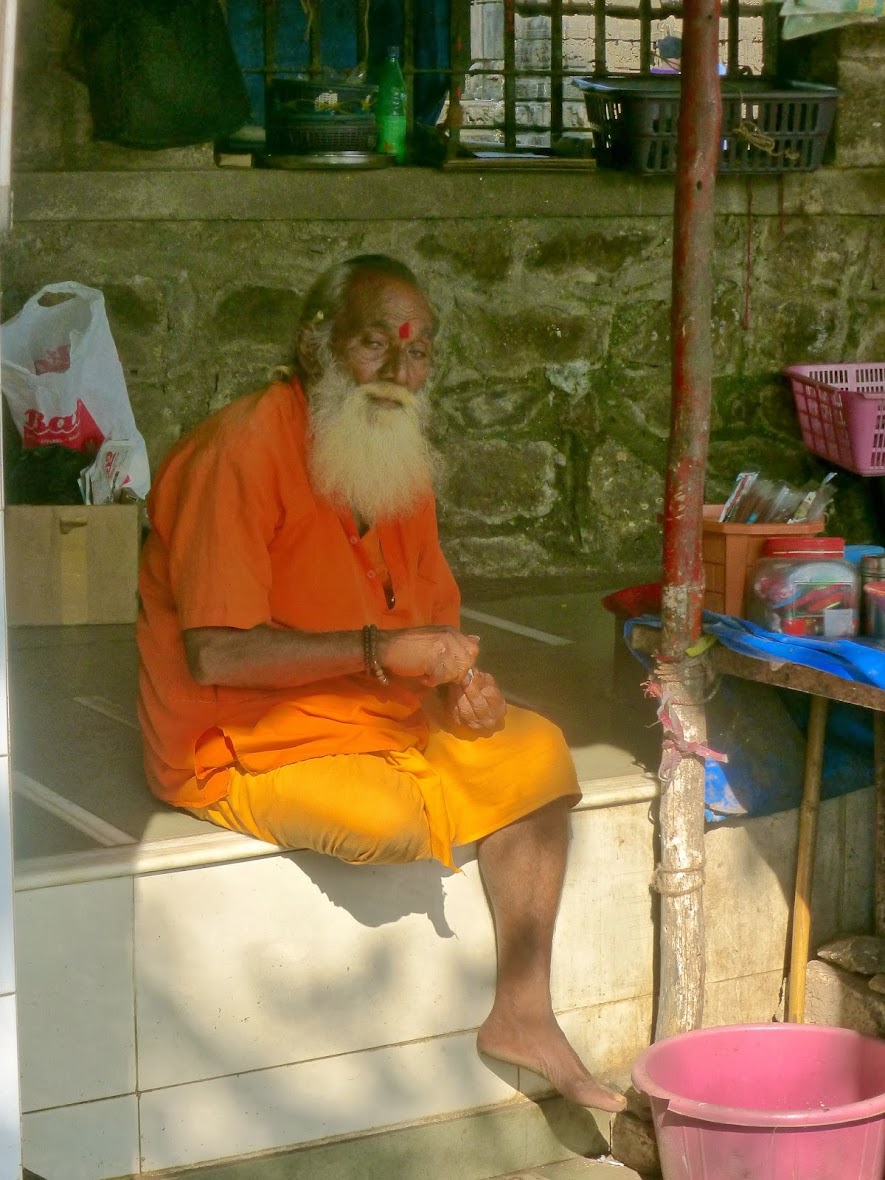 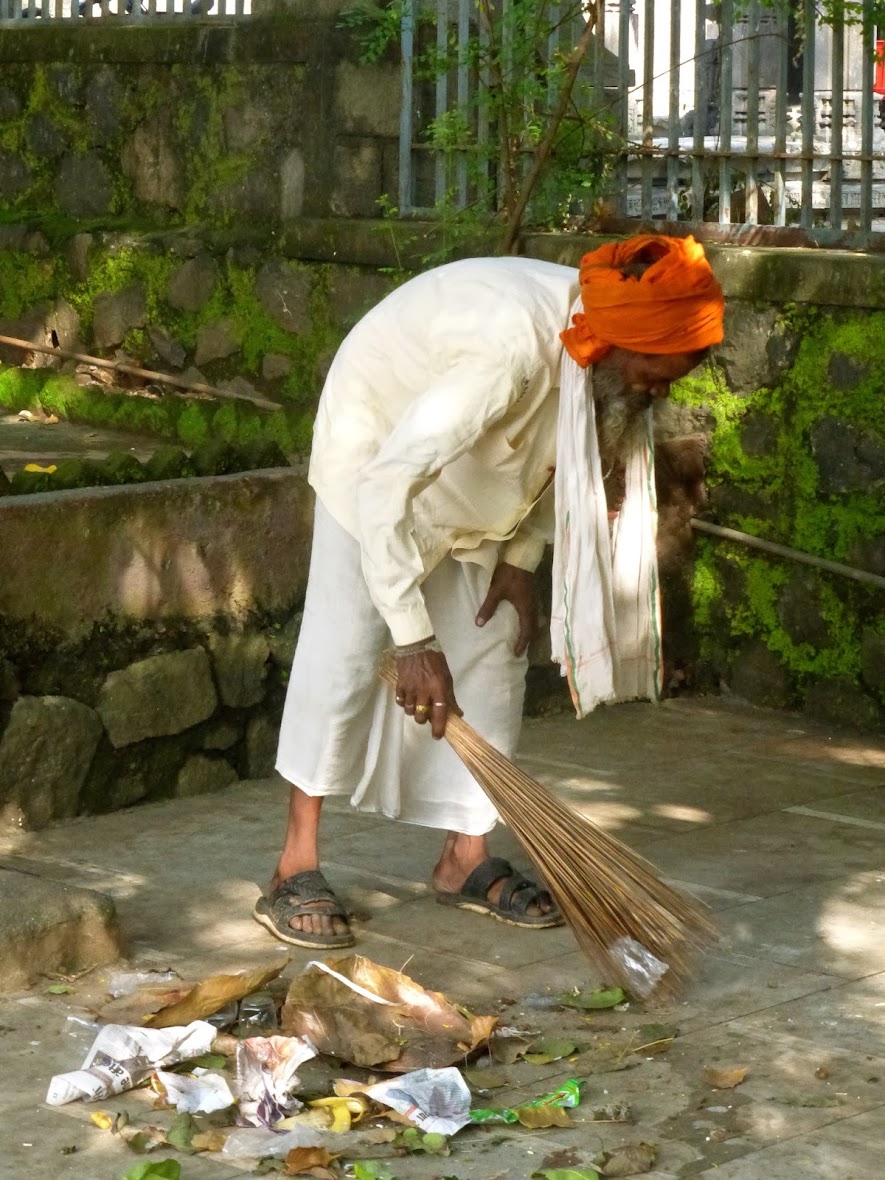 The temple complex is kept quite clean, and I saw some men dressed in the typical holy saffron clothes who seemed to be maintaining the complex regularly 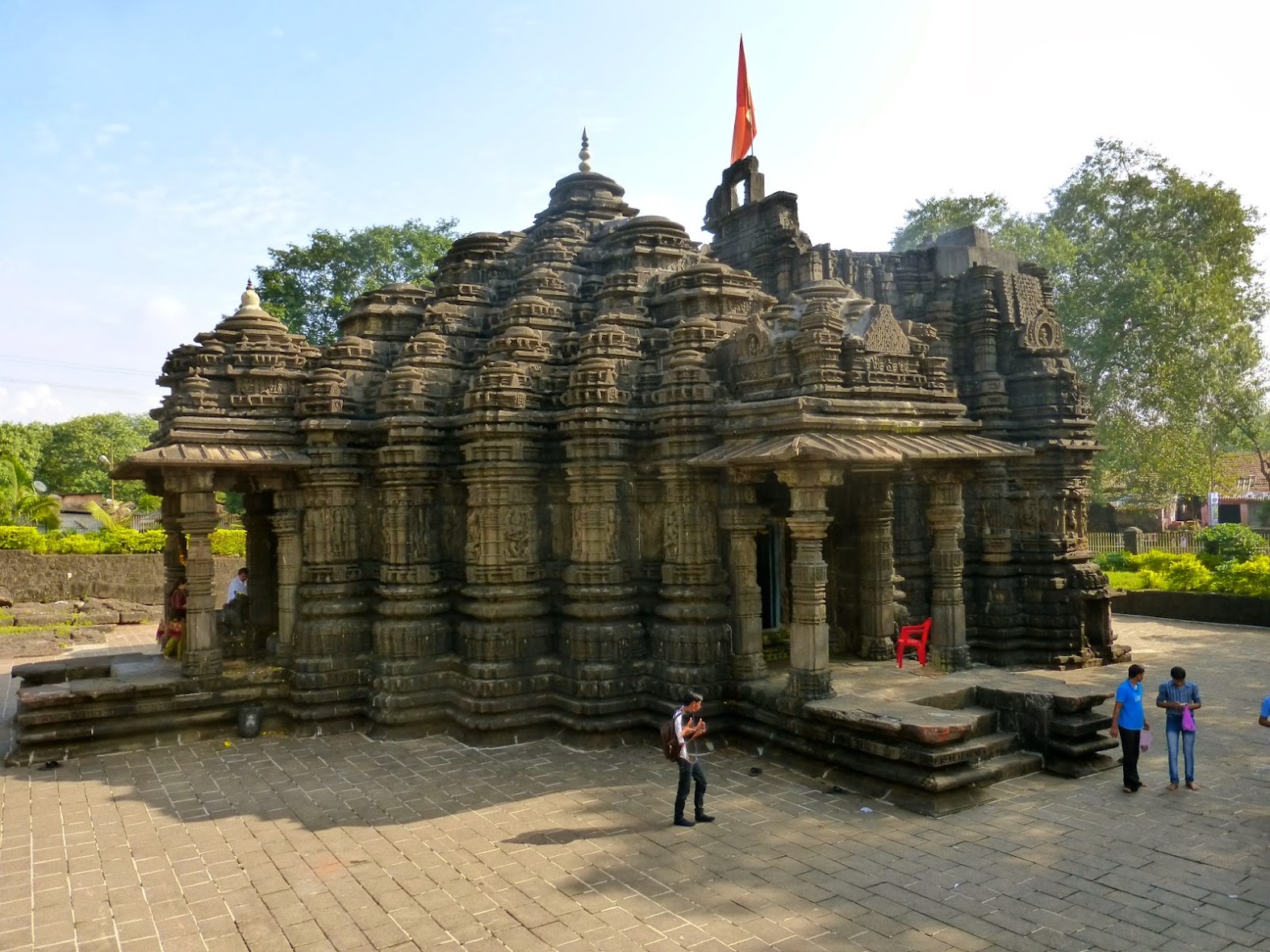 It was almost noon and getting quite hot, and I had to cycle all the way back home. So I took one last look at the magnificent temple, collected my cycle from the shop, had a nice cool drink and headed off back the same way I came – enjoying the short off-road section 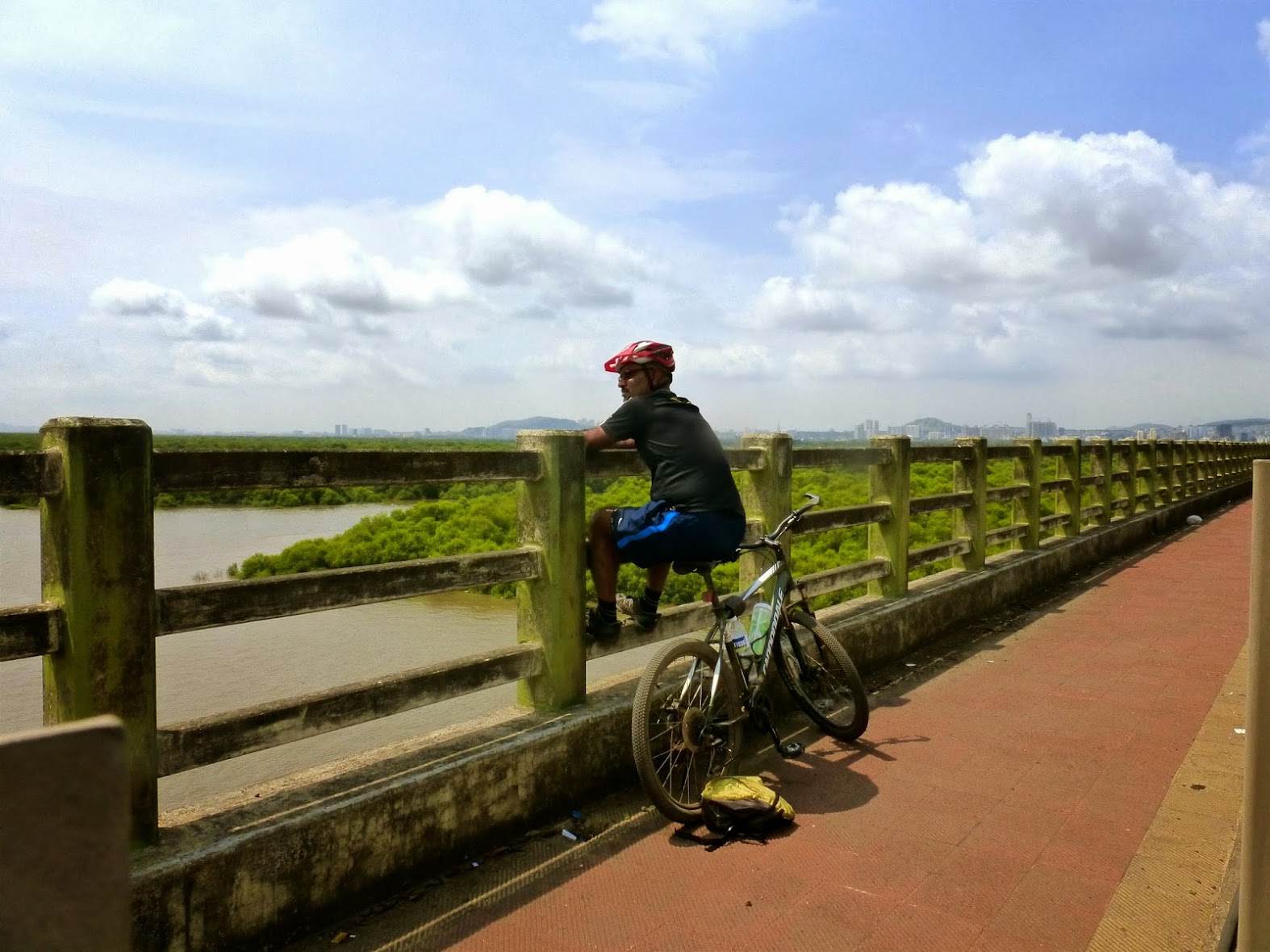 On the way back, I stopped briefly on Airoli bridge to admire the view of the creek and the mangroves lining it on both sides 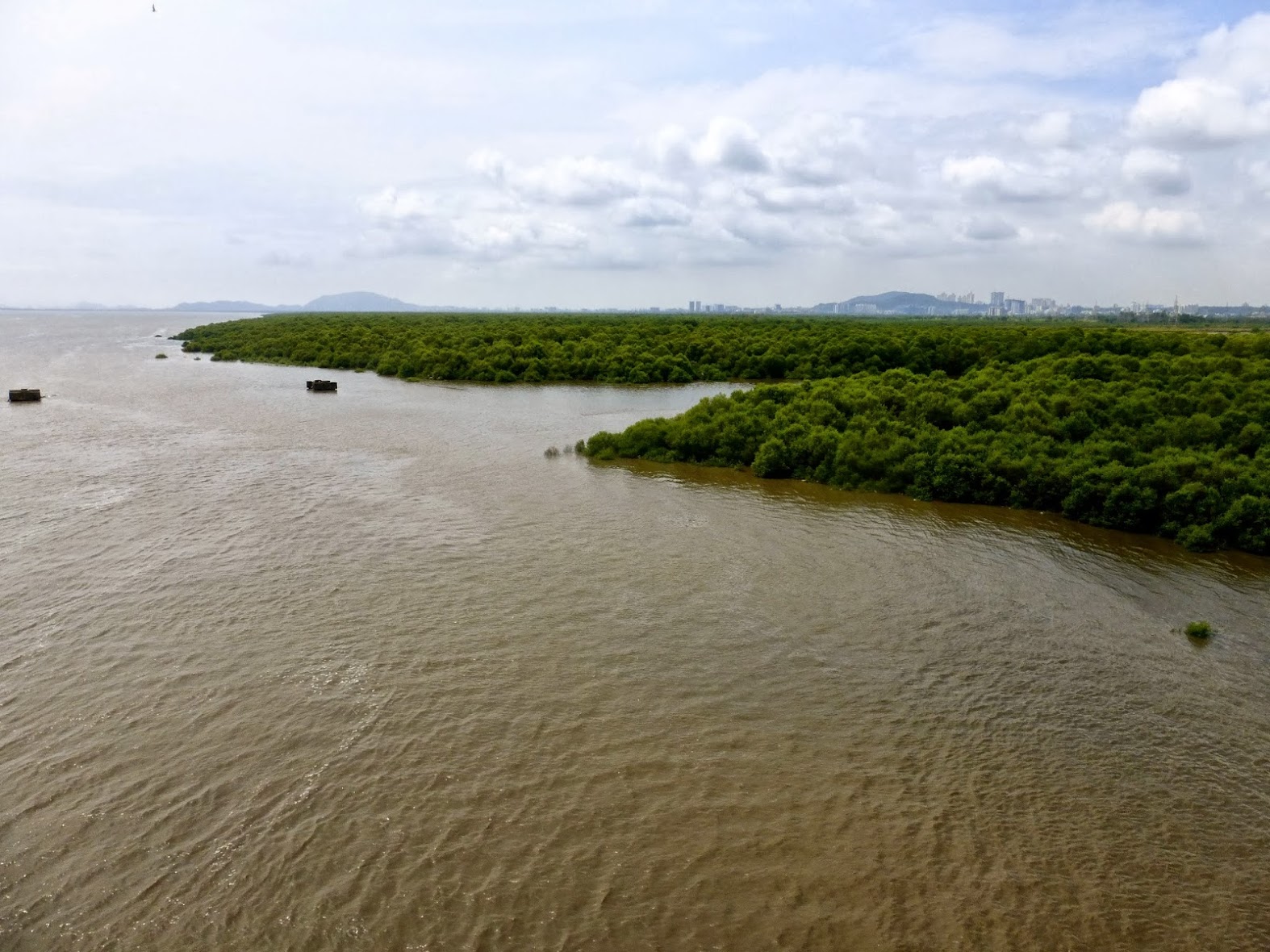 It is heartening to see these mangroves still in tact and free from encroachment by wanton construction of the exploding city of Mumbai. I remembered that recently the state revenue and forest department had elevated the mangroves in and around Mumbai from “protected forests” to “reserved forests” under section 4 of the Indian Forest Act – but making laws and enforcing them are two completely different things. So let’s hope this pristine view is preserved

The last leg of the journey was the climb back up the hill to Powai, and then climb up Mahakali hill back home. Covering a total distance of just over 94 kilometers, this turned out to be a really pleasant weekend ride! I was looking forward to coming back and climbing the nearby Malanggad.