While on a business visit to Phoenix, Arizona in March this year, I managed to take off on a Sunday to visit the Grand Canyon via Sedona, and got a whirlwind tour of one of the natural wonders of the world. After doing a bit of online research, I found that we could also rent a cycle at the Canyon and ride around. However, getting there without a vehicle was infeasible. So I had to settle for a pre-arranged tour, but that turned out to be the perfect option for just one day that I had free. 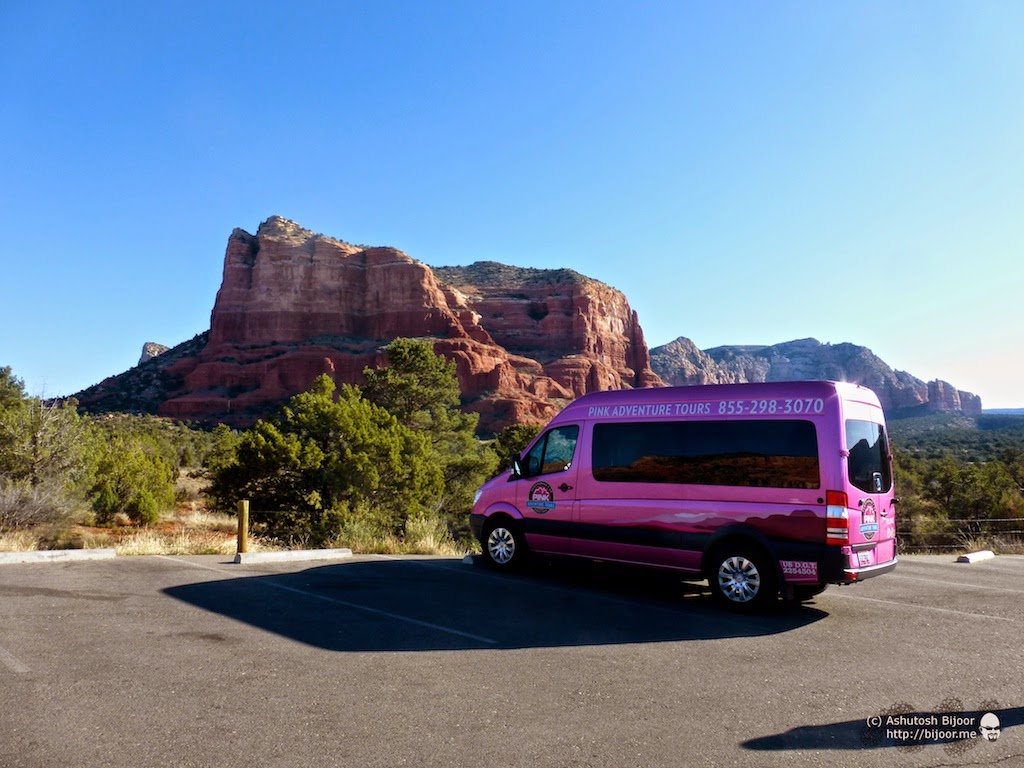 I took a day tour from one of the oldest and well known tour operator in the area – Pink Adventure Tours, and got a ride in this trademark pink van, with John – an ex-army guide who knew everything about everything! 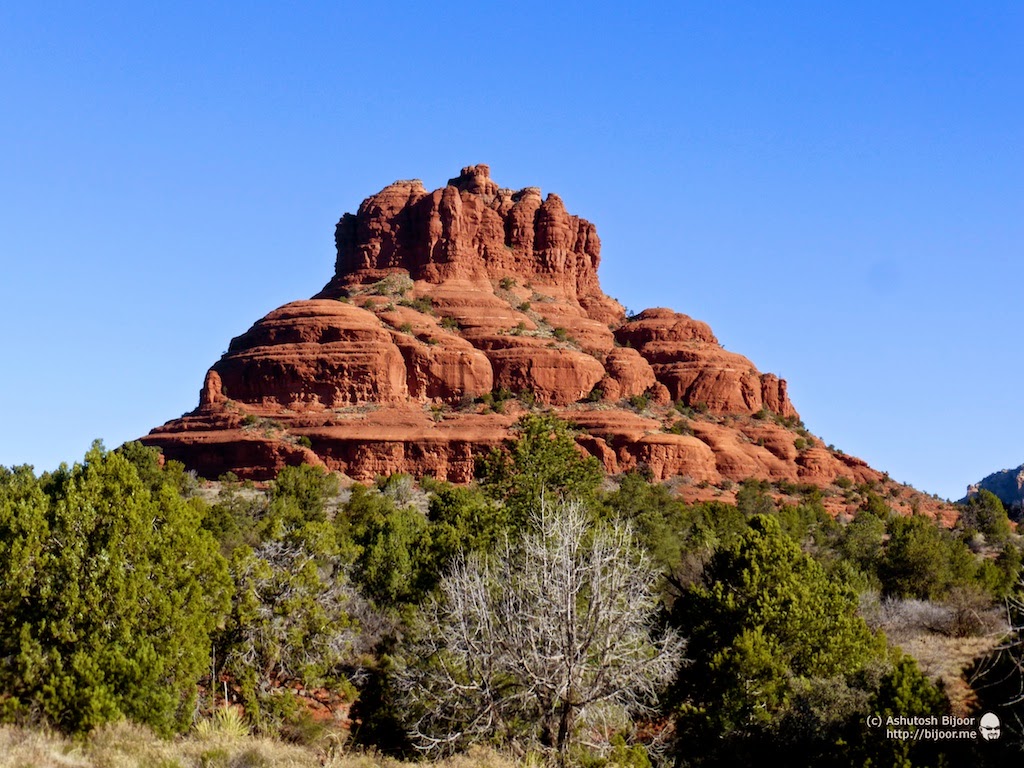 As we arrived at Sedona, we stopped to admire the beautiful mountains. Bell Rock is a popular tourist attraction just north of the Village of Oak Creek, Arizona, south of Sedona in Yavapai County. Its summit elevation is 4,919 feet (1,499 m), It is just west of Courthouse Butte (ref) 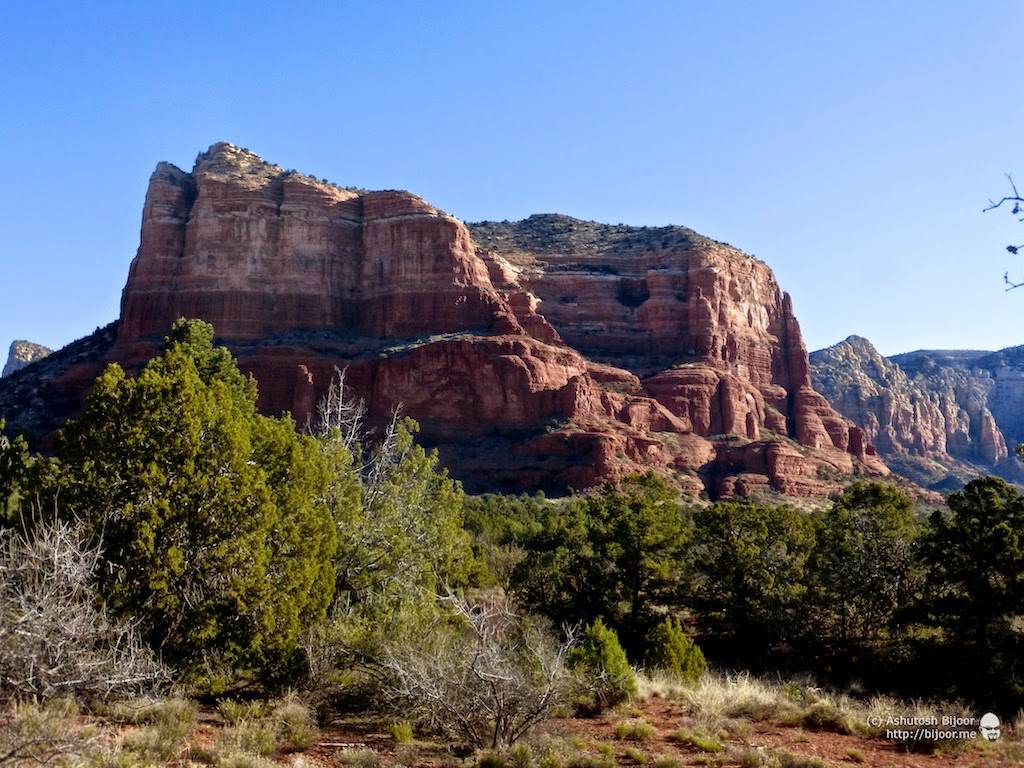 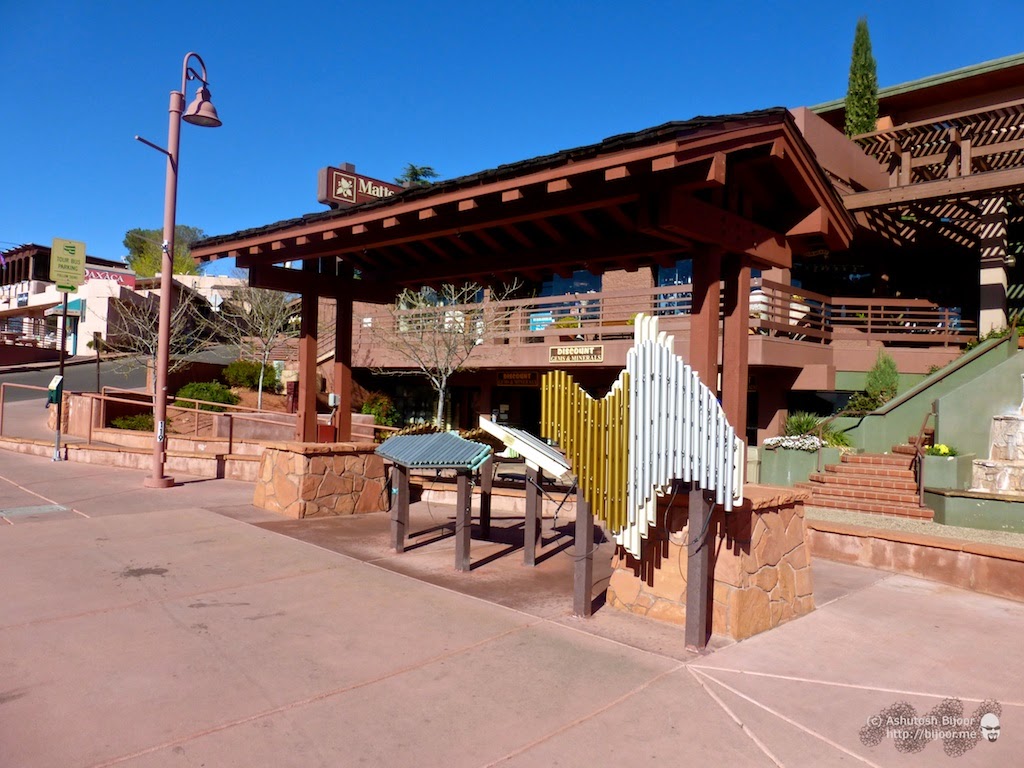 The main street in Sedona is lined with restaurants and shops selling various handicraft and souvenirs. One unique installation at a street corner is a set of musical instruments – which are Freenotes’s Contrabass Chimes, Saturn’s Chimes, and Manta Ray. Grammy award winner, Richard Cooke, founded Harmony Park by Freenotes as a way to share his passion of music with all. Regardless of your artistic abilities, Freenotes’s designs offer a way for anyone to blend musical notes into a beautiful melody. Eleven instruments including xylophones, chimes and marimbas are perfectly tuned to create distinct pure tones (ref) 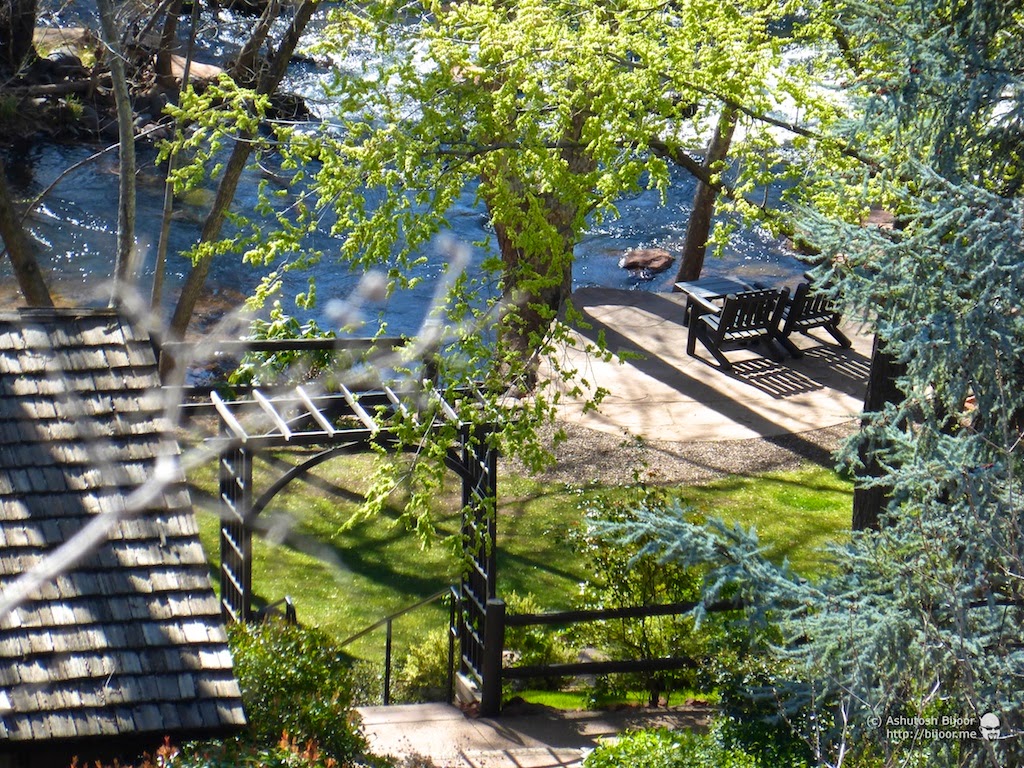 As I sat sipping a coffee at the Pink Java Cafe and admiring the mountains of Sedona, I looked down in the valley below to notice this small clearing next to the river with two wooden chairs – what a great place to spend a day reading and listening to the sound of flowing water! 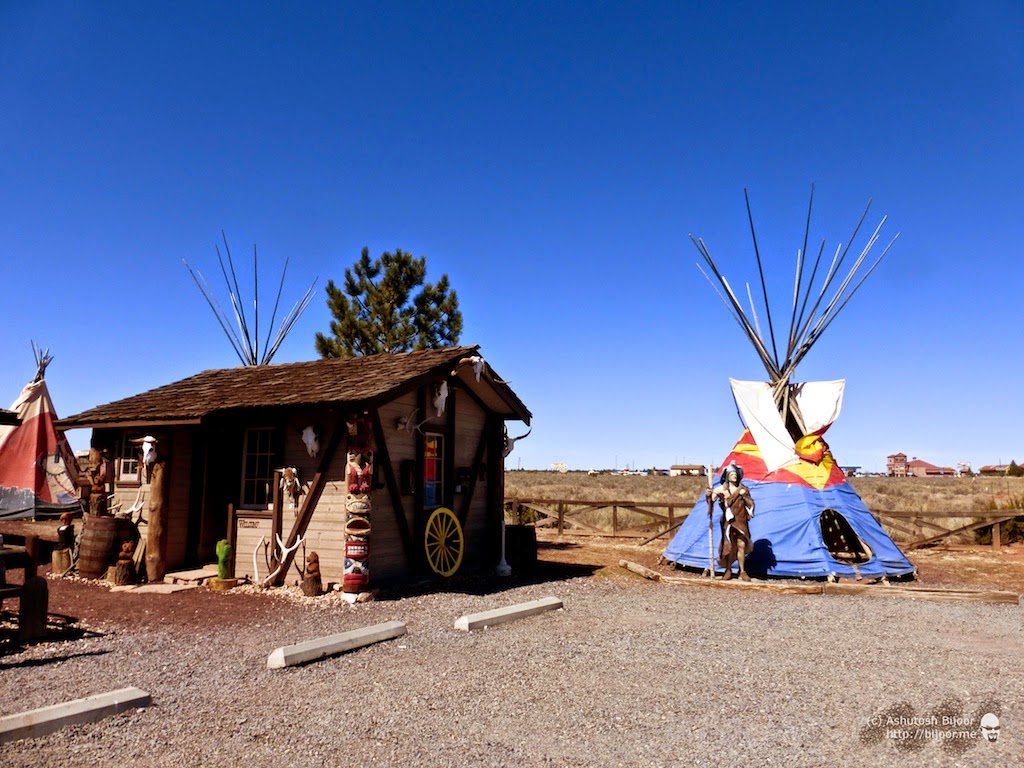 Just before we reached the Grand Canyon, we took a small break at this cute little store next to the highway, that sold Indian handicrafts and had a wide range of stuffed animals. This teepee hut and a log hut next to it complete the picture. 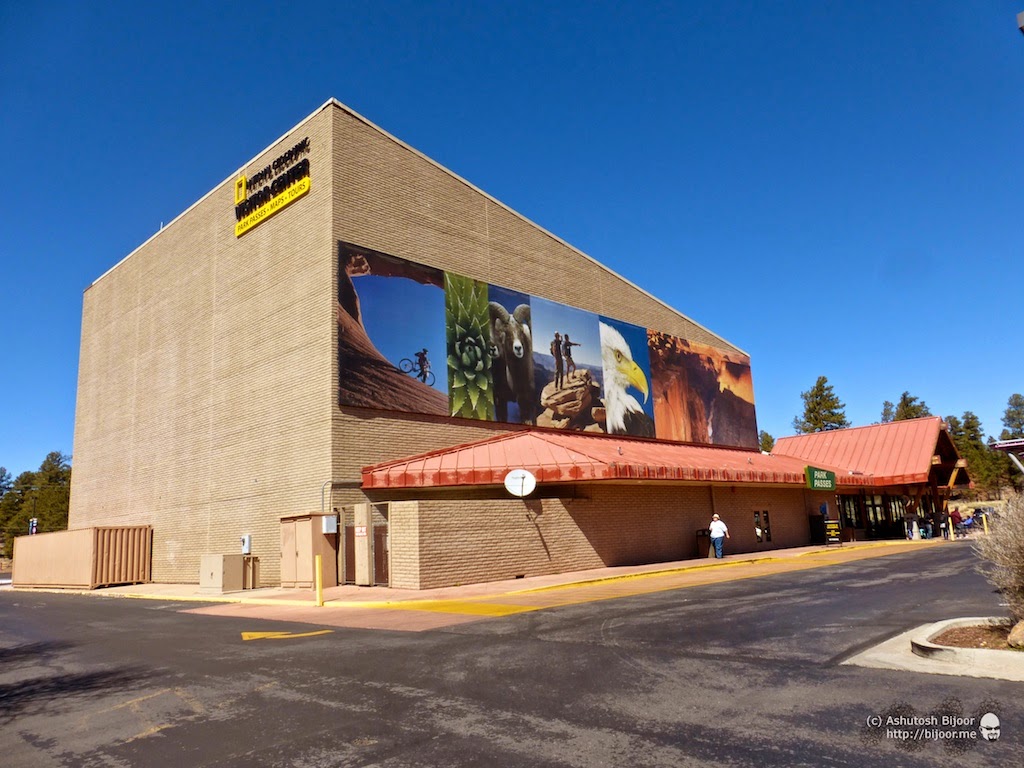 Lunch halt at the visitors center and Imax theater managed by the National Geographic, where I had pre-ordered a packed lunch with a sandwich, fruit and a packet of chips. My co-travelers also loaded up with their packed lunch and we went ahead eagerly looking forward to the first glimpse of the Grand Canyon 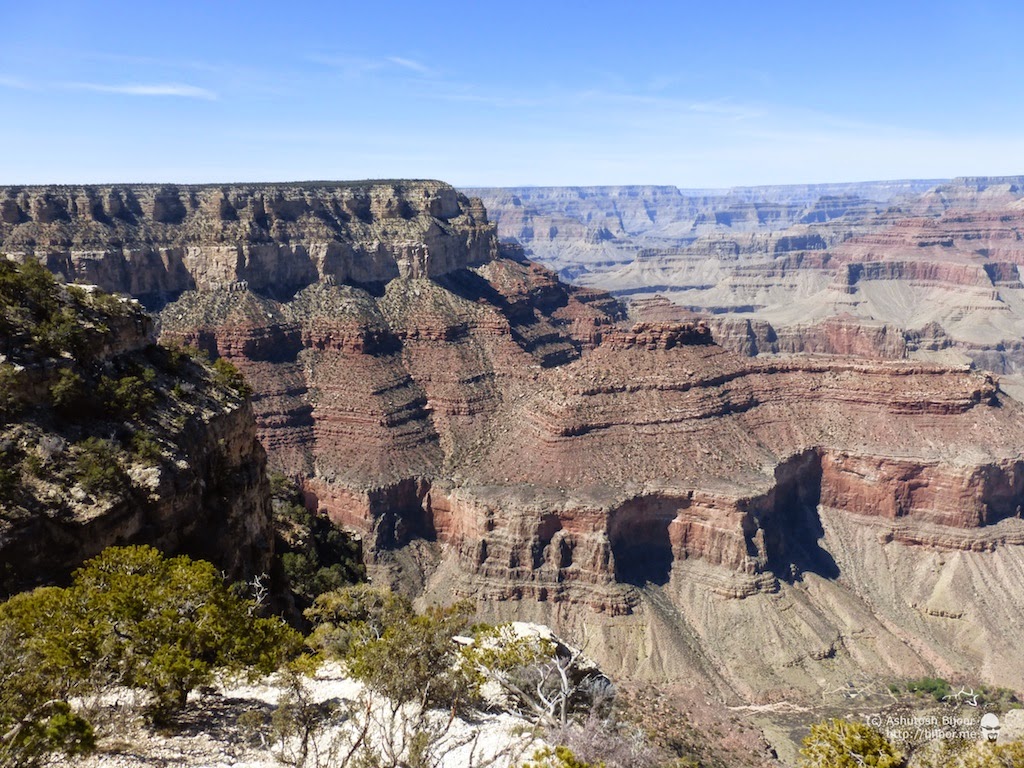 And finally we get to see the Grand Canyon in all its glory! The Grand Canyon is 277 miles (446 km) long, up to 18 miles (29 km) wide and attains a depth of over a mile (6,000 feet or 1,800 meters). Nearly two billion years of Earth’s geological history have been exposed as the Colorado River and its tributaries cut their channels through layer after layer of rock while the Colorado Plateau was uplifted (ref) 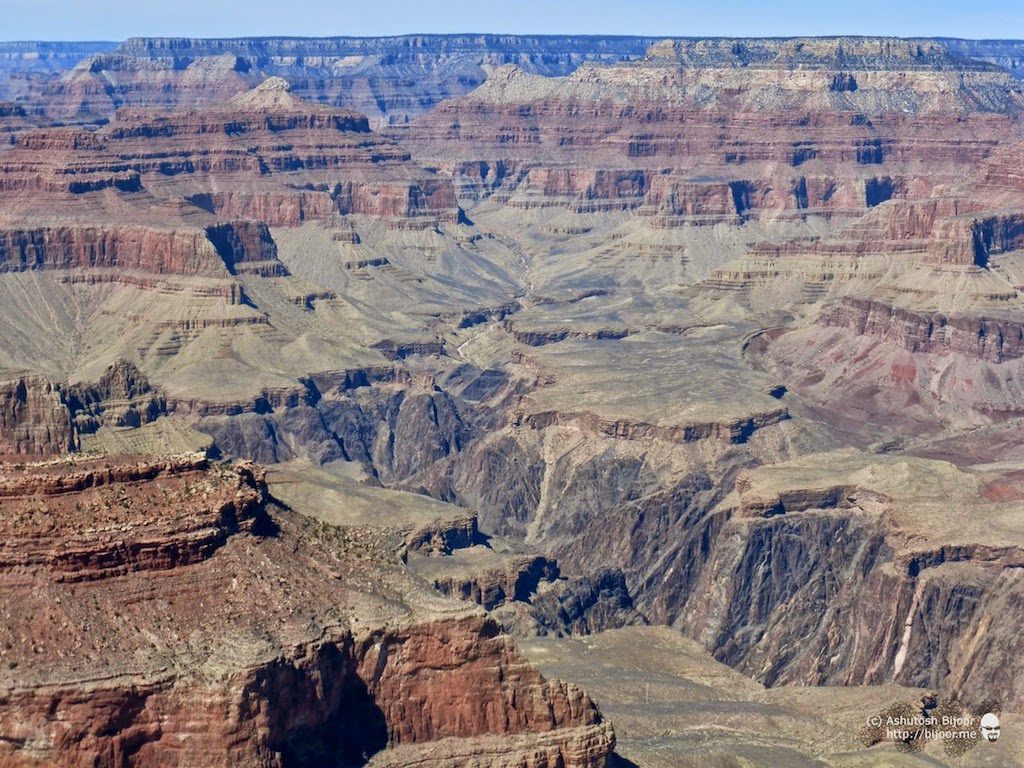 While the specific geologic processes and timing that formed the Grand Canyon are the subject of debate by geologists, recent evidence suggests that the Colorado River established its course through the canyon at least 17 million years ago. Since that time, the Colorado River continued to erode and form the canyon to its present-day configuration (ref) 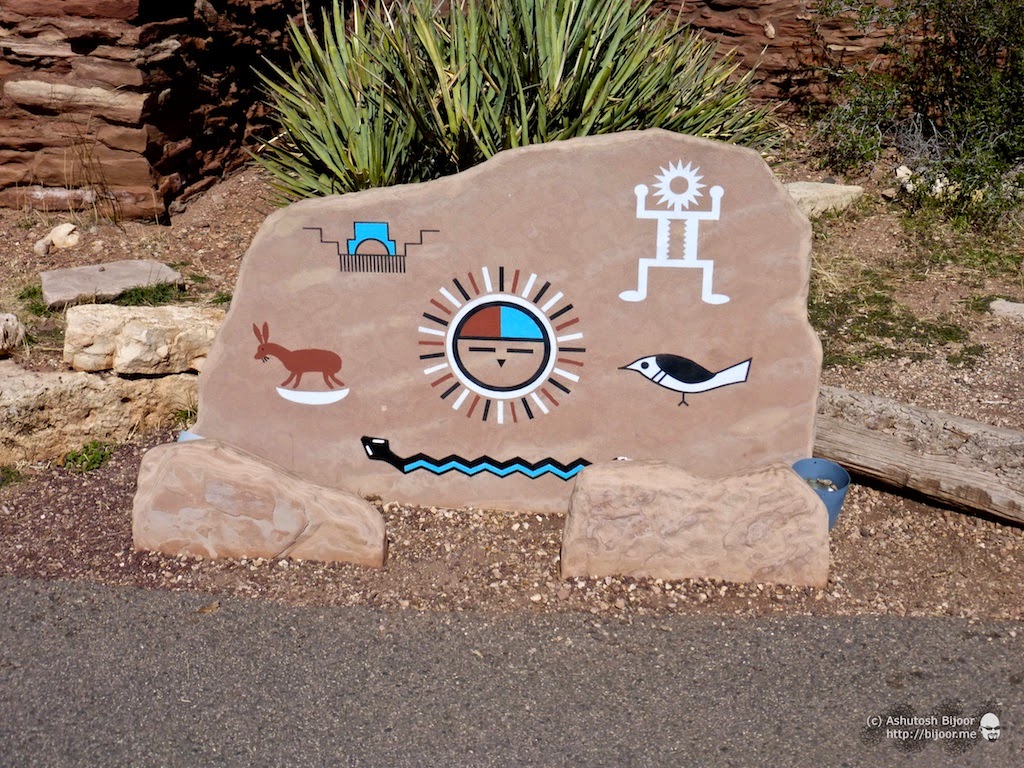 For thousands of years, the area has been continuously inhabited by Native Americans who built settlements within the canyon and its many caves. The Pueblo people considered the Grand Canyon (“Ongtupqa” in Hopi language) a holy site and made pilgrimages to it. The first European known to have viewed the Grand Canyon was García López de Cárdenas from Spain, who arrived in 1540 (ref) 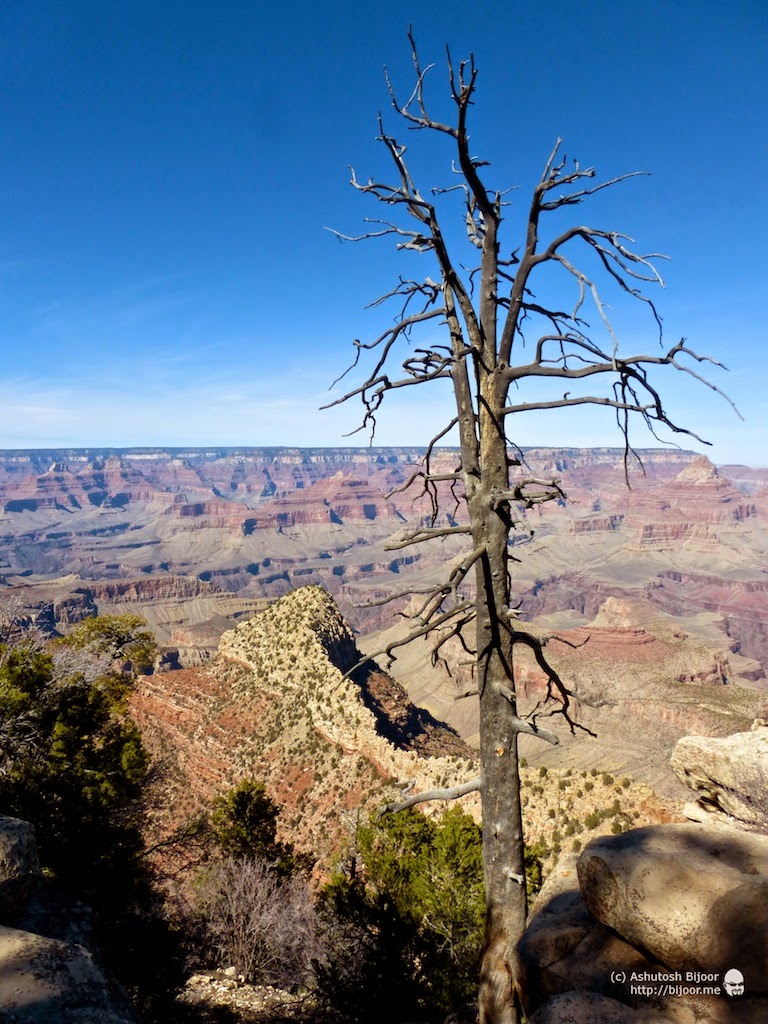 I discovered that there is a connection of the Grand Canyon with Hindu mythology. The major geologic exposures in the Grand Canyon range in age from the 2-billion-year-old Vishnu Schist at the bottom of the Inner Gorge to the 230M-year-old Kaibab Limestone on the Rim. These basement rocks have also been called either the Vishnu Complex or Vishnu Metamorphic Complex. These Early Proterozoic crystalline rocks consist of metamorphic rocks that are collectively known as the Granite Gorge Metamorphic Suite, consisting of lithologic units, the Brahma, Rama, and Vishnu schists, that have been mapped within the Upper, Middle, and Lower Granite Gorges of the Grand Canyon (ref) 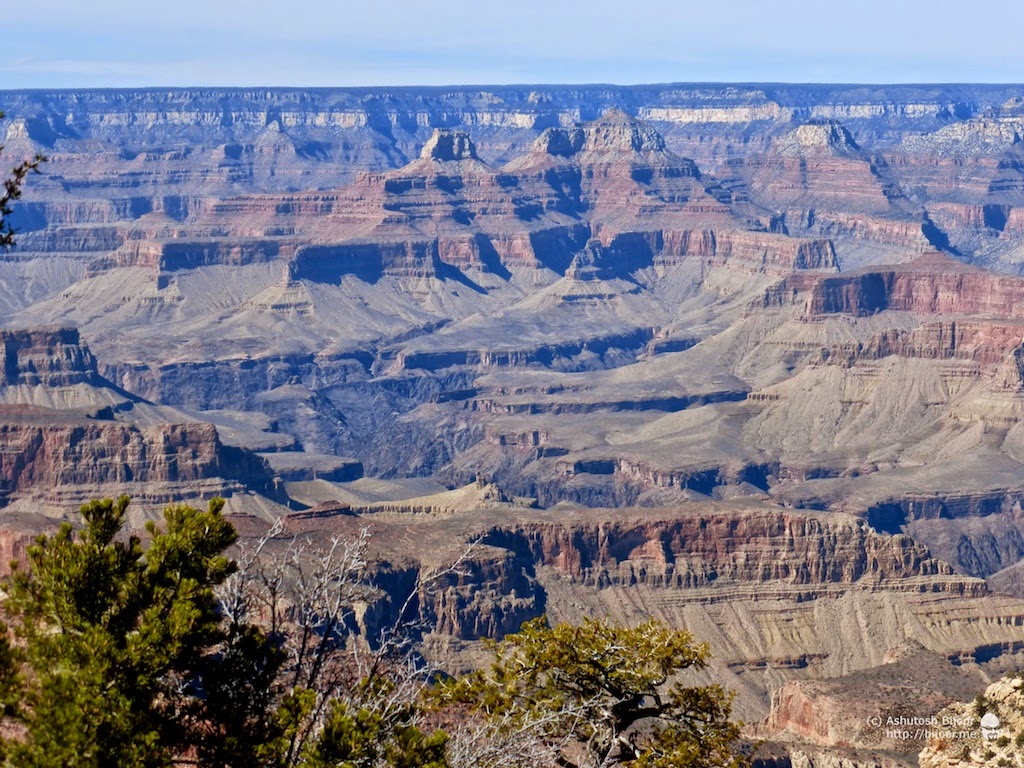 However, I found no mention of any connection of India in the history of the Canyon. The Ancient Puebloans were said to be the first people known to live in the Grand Canyon area. The Ancient Pueblo People were a Native American culture centered on the present-day Four Corners area of the United States. The cultural group has often been referred to in archaeology as the Anasazi, although the term is not preferred by the modern Puebloan peoples. The word “Anasazi” is Navajo for “Ancient Ones” or “Ancient Enemy” (ref) 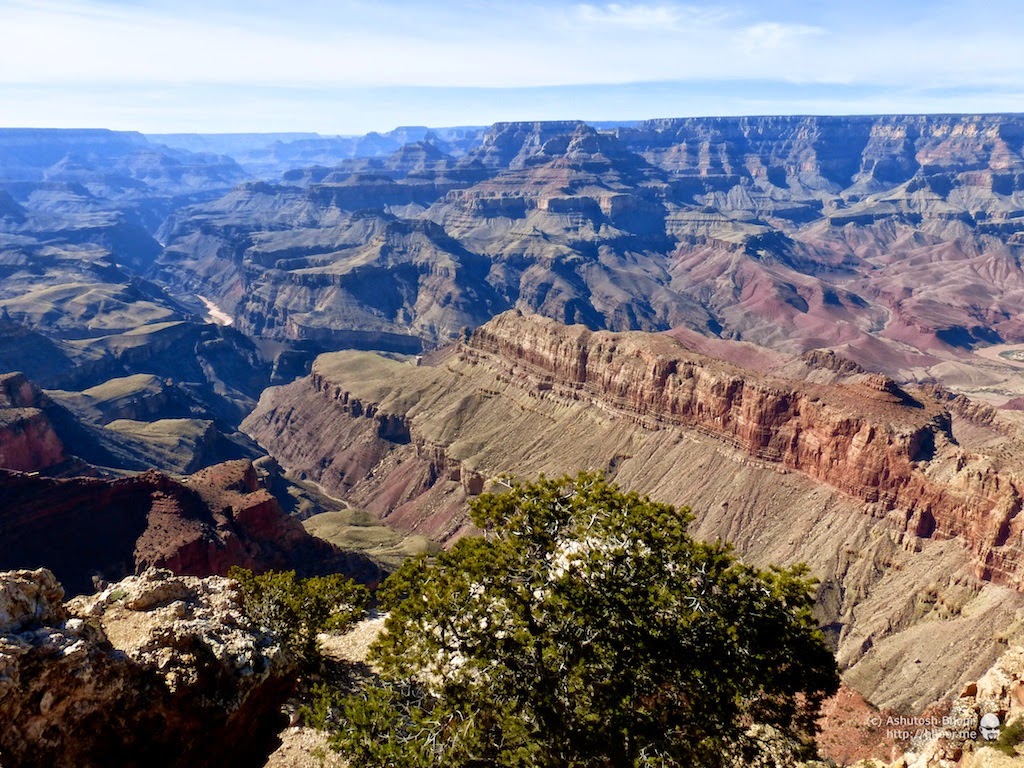 Aside from casual sightseeing, there are various adventure activities that are popular at the Canyon such as rafting, hiking, running and helicopter tours. The Grand Canyon Ultra Marathon is a 78-mile (126 km) race over 24 hours (ref) 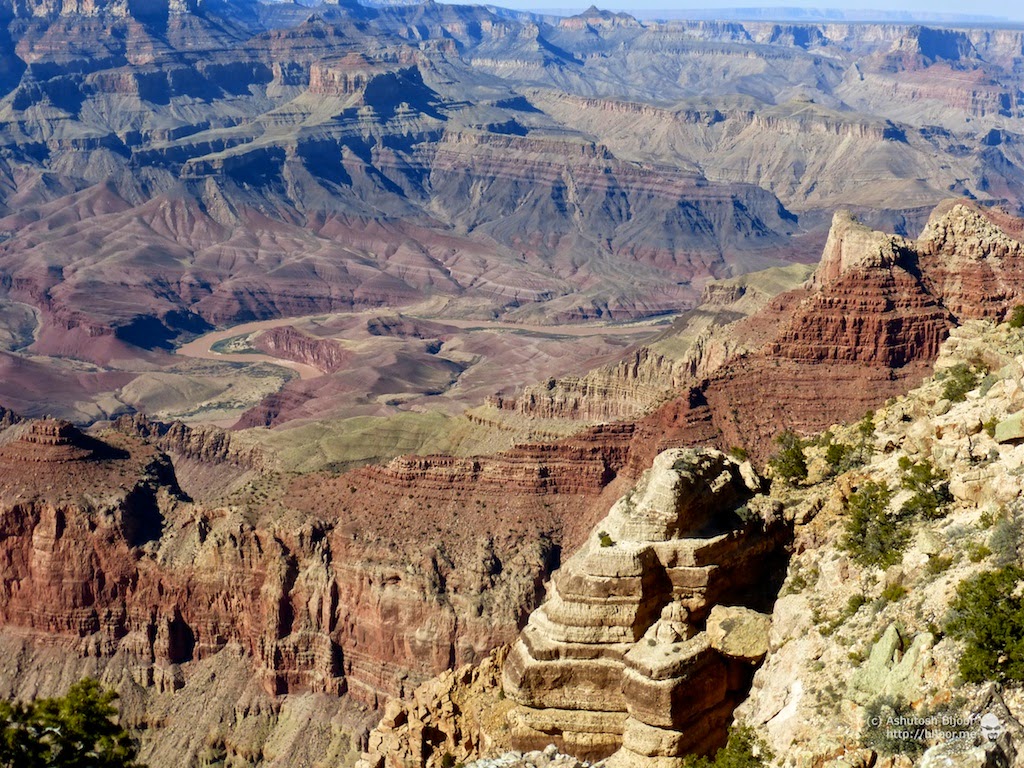 The floor of the valley is accessible by foot, muleback, or by boat or raft from upriver. Hiking down to the river and back up to the rim in one day is discouraged by park officials because of the distance, steep and rocky trails, change in elevation, and danger of heat exhaustion from the much higher temperatures at the bottom. Rescues are required annually of unsuccessful rim-to-river-to-rim travelers. Nevertheless, hundreds of fit and experienced hikers complete the trip every year (ref) 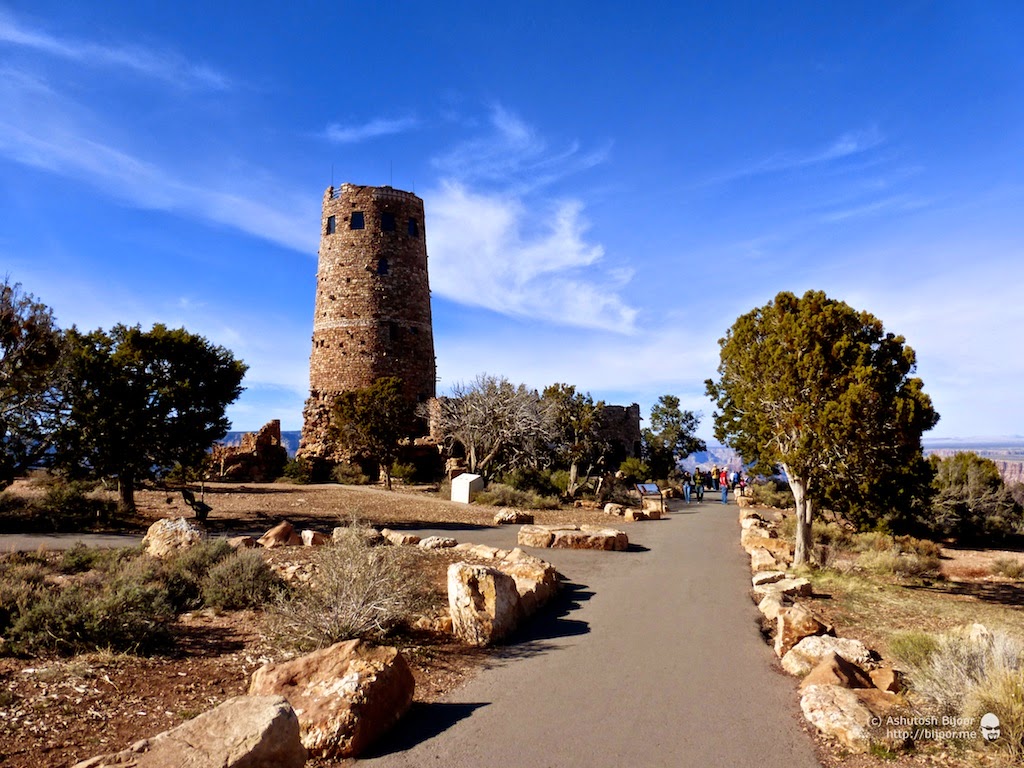 One of the most impressive structures on the South Rim is the Desert View and Watchtower. The watchtower is a stone edifice designed by Mary E.J. Colter and built in 1932. Rising 70 feet above the Canyon rim, the tower was intended to mimic ancient architecture and accommodate early tourists (ref1,ref2) 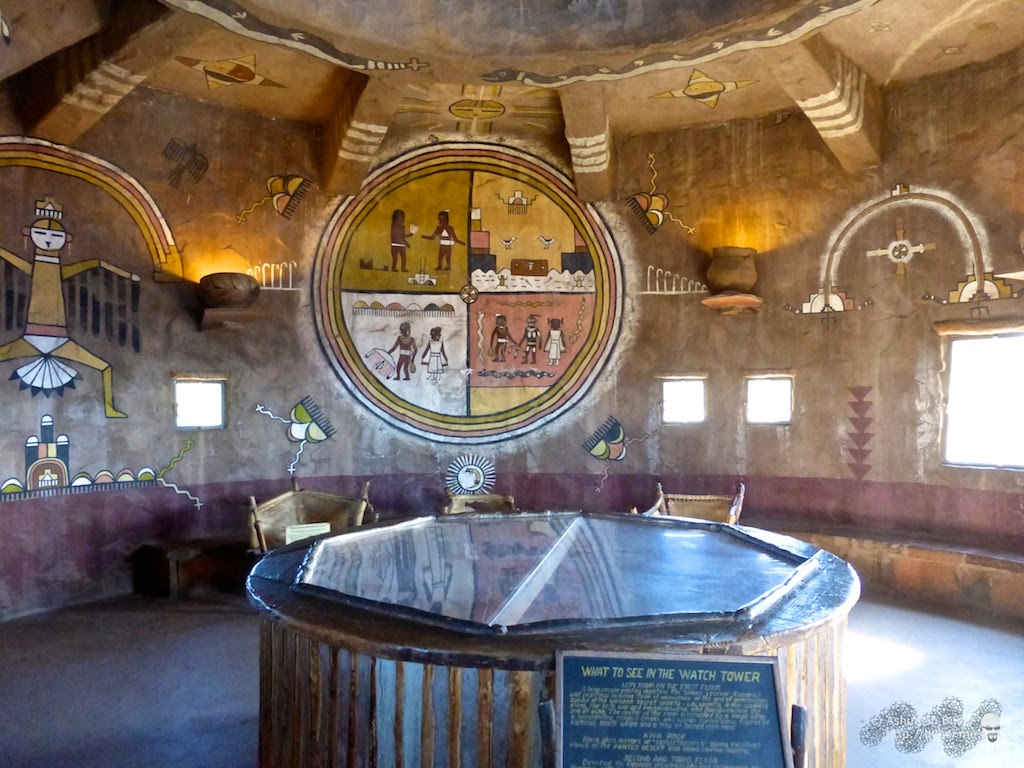 Glass windows are placed all around the tower that provide fabulous views of the Canyon. The tower also boasts murals, recreations of Native American petroglyphs, a gift shop, and demonstrations of Hopi weaving (ref1,ref2) 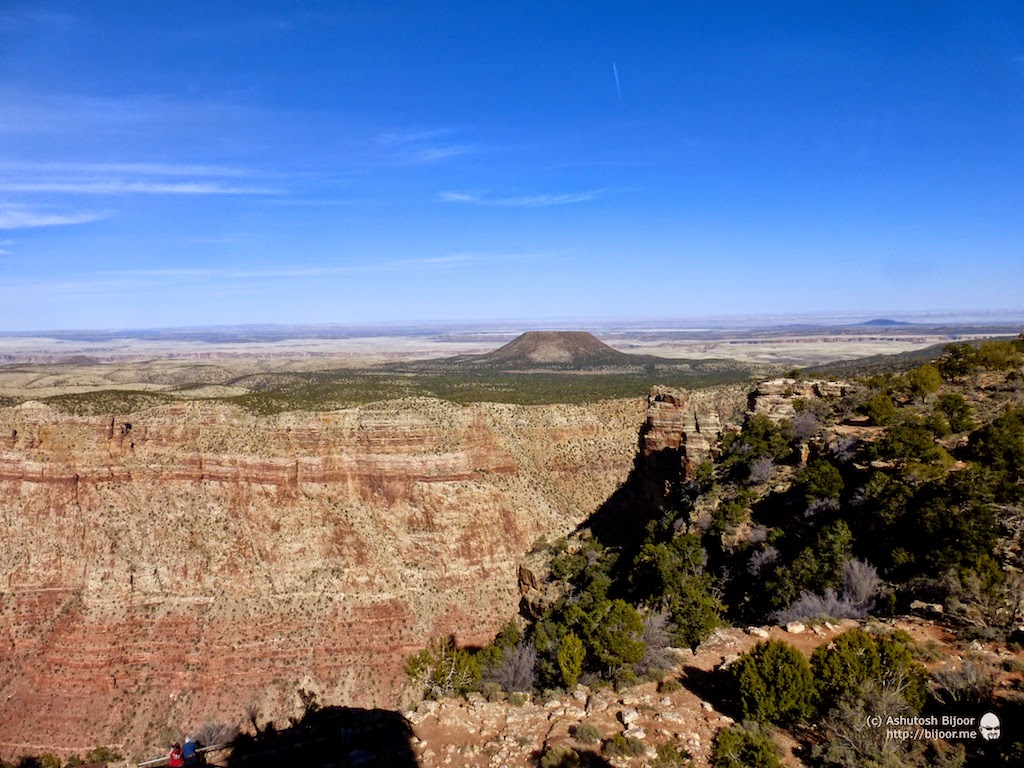 My last view of the Canyon was of this conical shaped mountain – the Cedar Mountain. This is a 7057 high mountain and is covered in cedar, a ubiquitous tree on the Colorado plateau. The tree’s berries formed an important part of the indigenous winter diet in years where pinyon nuts were scarce. Dyes made from its bark figure prominently in traditional Navajo textiles (ref)

After this, we headed back in the Pink Adventures’ van, tired after a long day but greatly satisfied by having seen one of the seven natural wonders of the world – and rightly so, for it surely is a Grand place indeed!