The nearest railway station is Kaman Road Station on the Vasai-Panvel line, but it is just 15 km from Vasai station and one can reach Kaman by road from Vasai via the Chinchoti-Anjur phata road. We of course did not come by train – we cycled from Andheri via the NH8 and turned right at the Chinchoti junction towards Kaman and then cycled up to Devkundi, the base village from where the trek starts 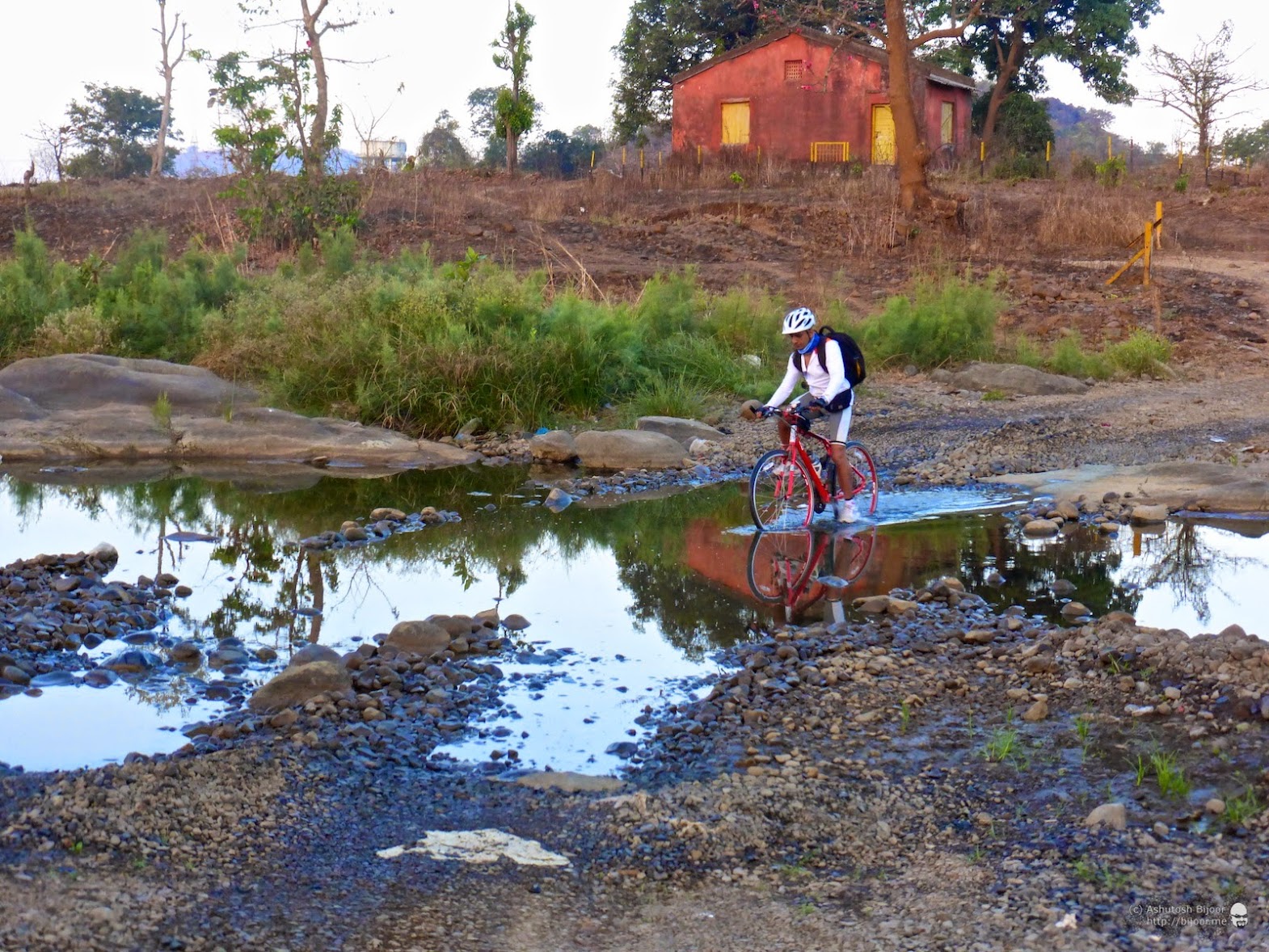 From Kaman, we took a detour to the left towards Devkundi. The easiest way to identify the turning is to locate this stream that is a tributary of the Ulhas river and runs all the way from Kaman to Devkundi. Being the month of March, there was hardly any water flowing and it was quite easy to cross the stream – but could be difficult in the monsoon – though there is an alternate route via Mhatre marg visible in the map, from where you can take the first right towards Devkundi 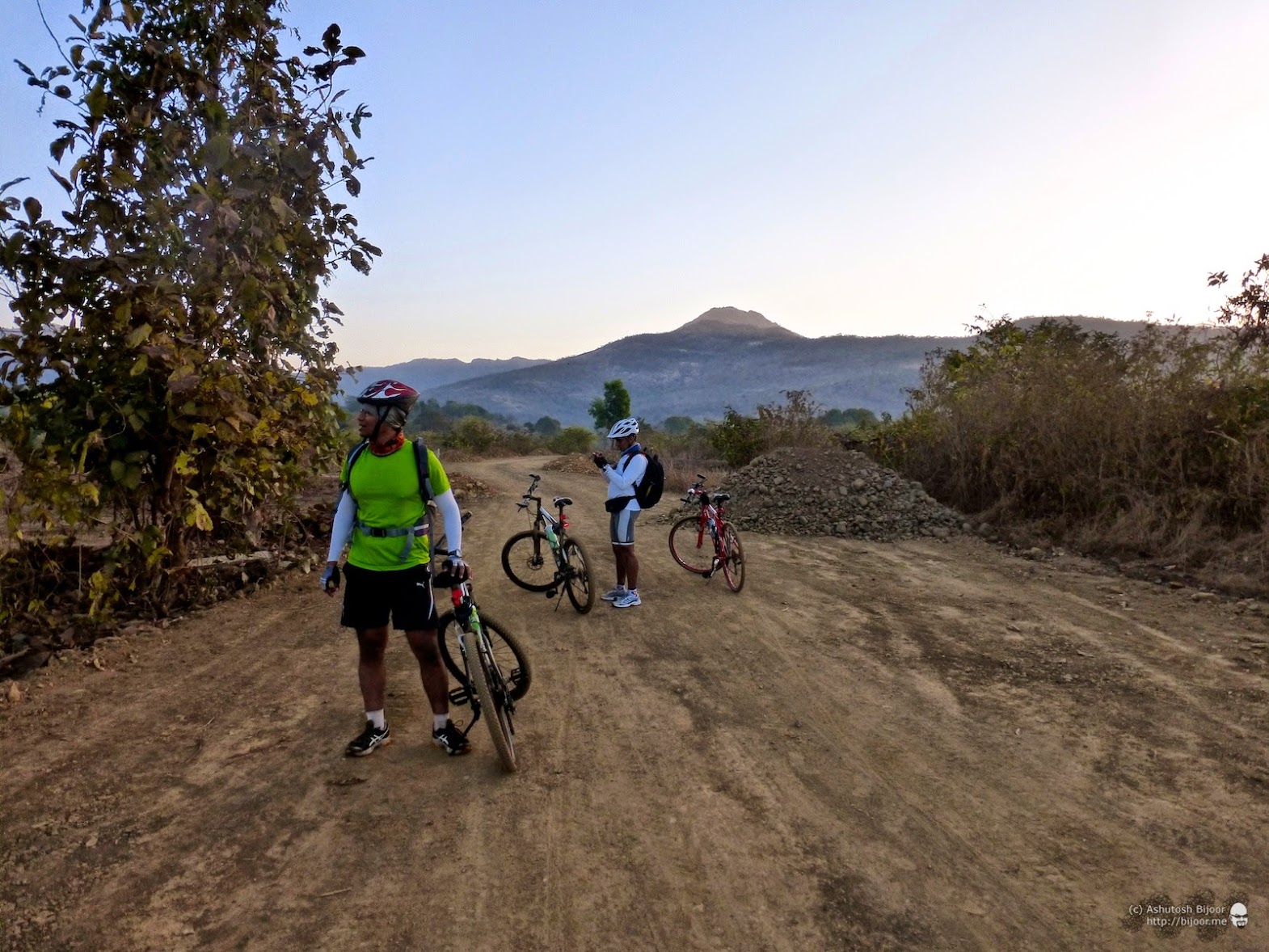 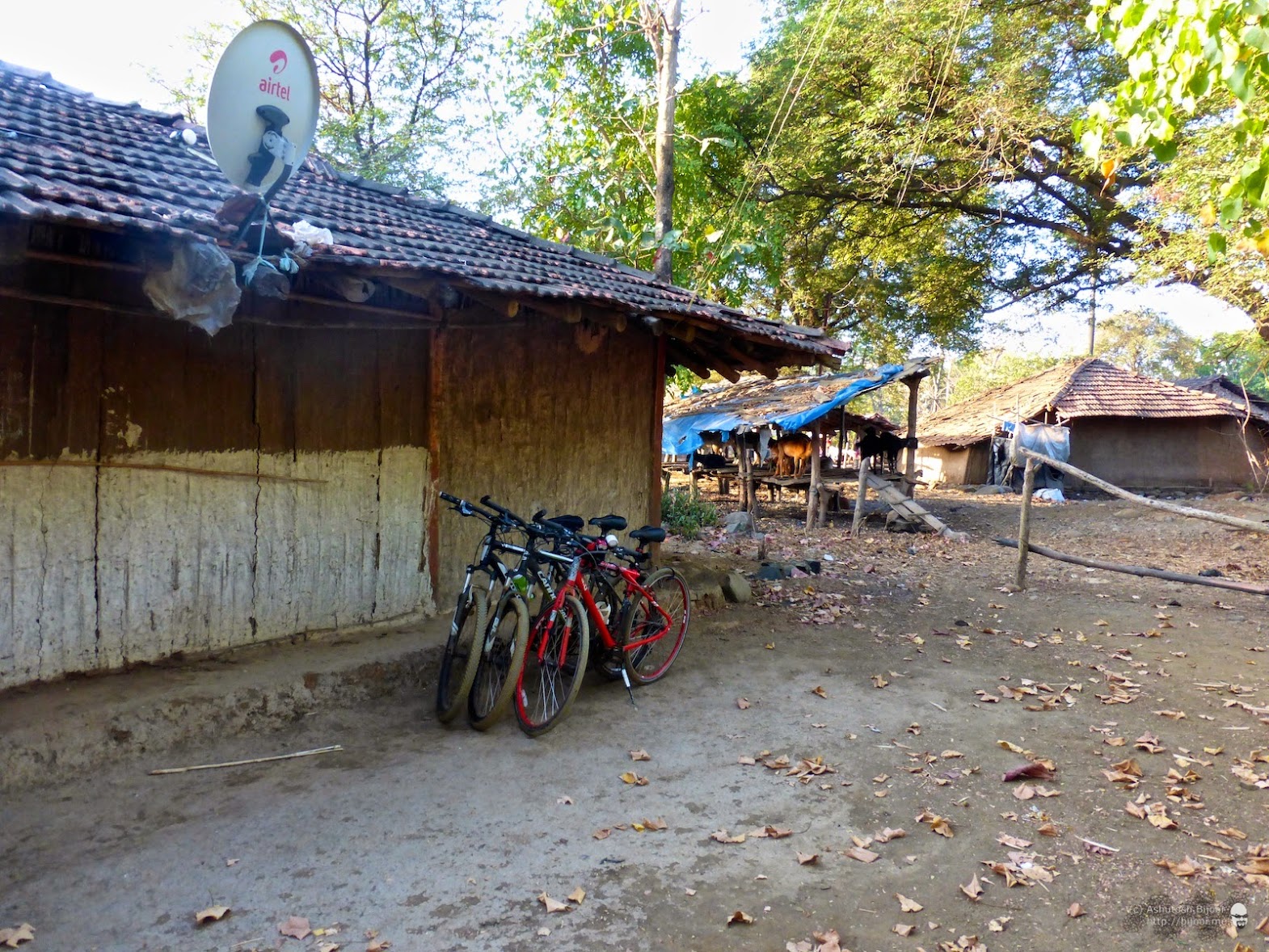 We reached Devkundi and parked our cycles beside a villager’s house requesting him to keep an eye on them. We tried to convince him to send someone with us as a guide, but he refused. So we had to find our own way. He gave us rough instructions to follow the path along the river and keep to the left 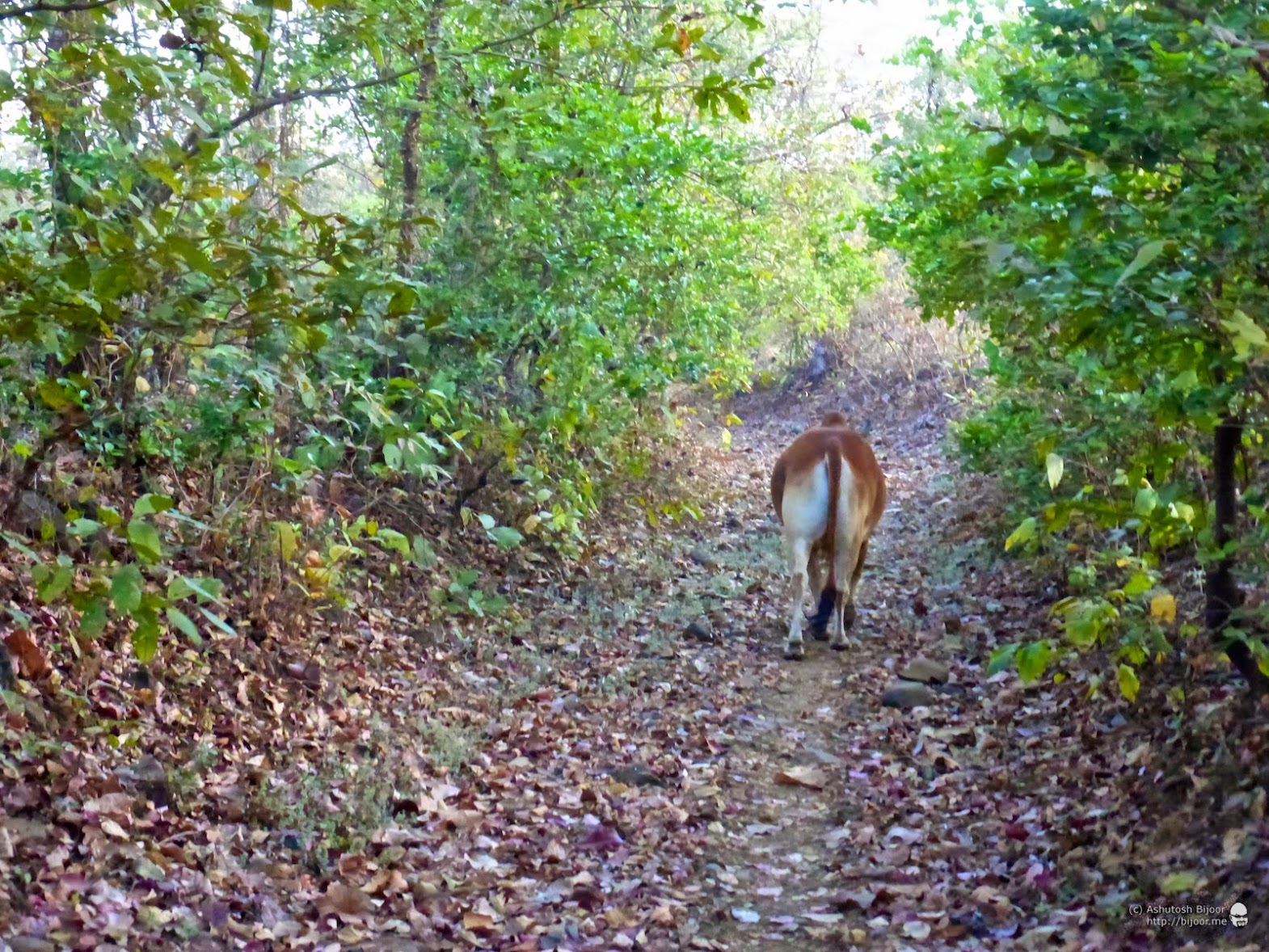 Initially the path was quite straightforward, and the broad cattle path followed the banks of the stream… 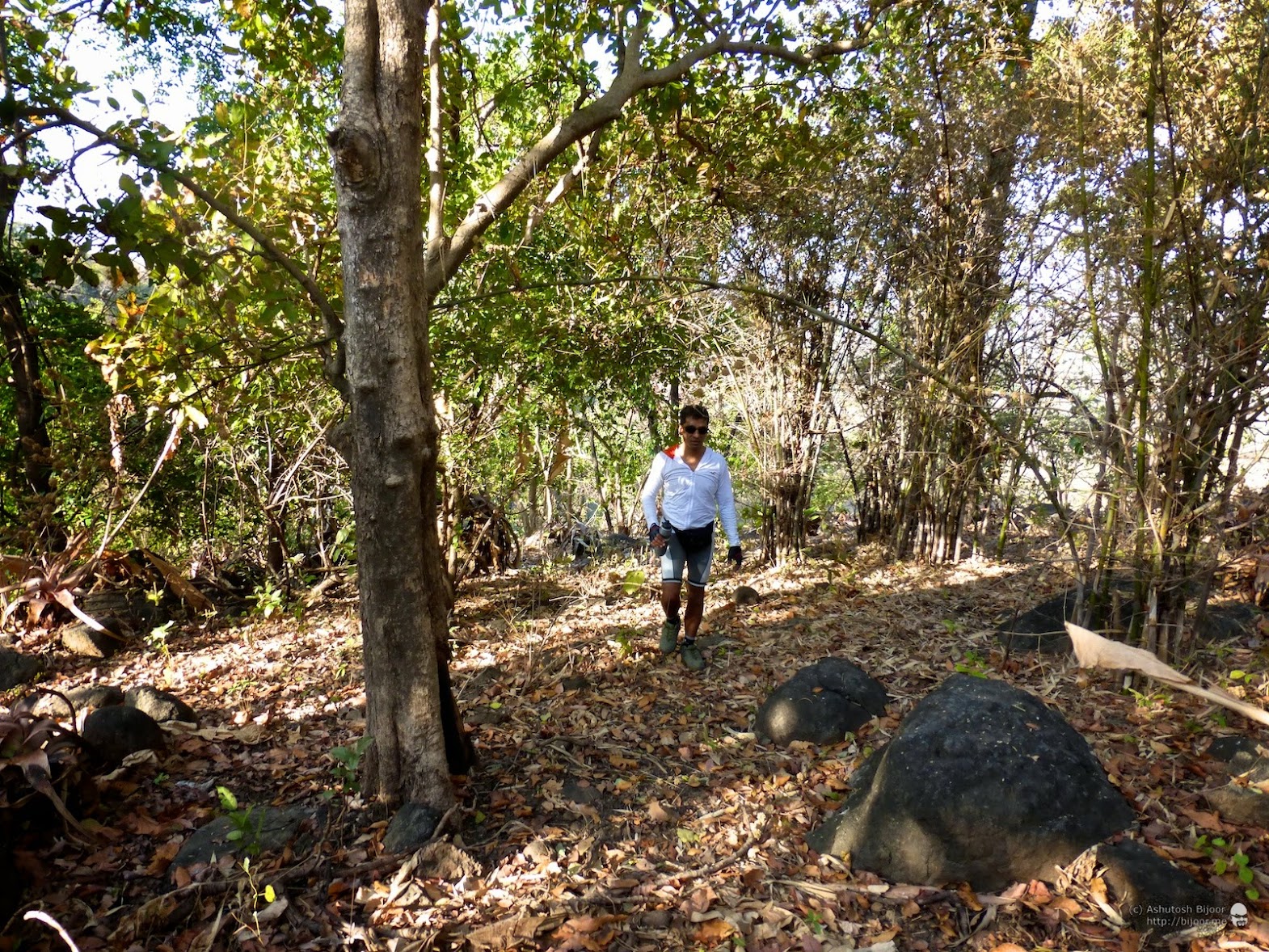 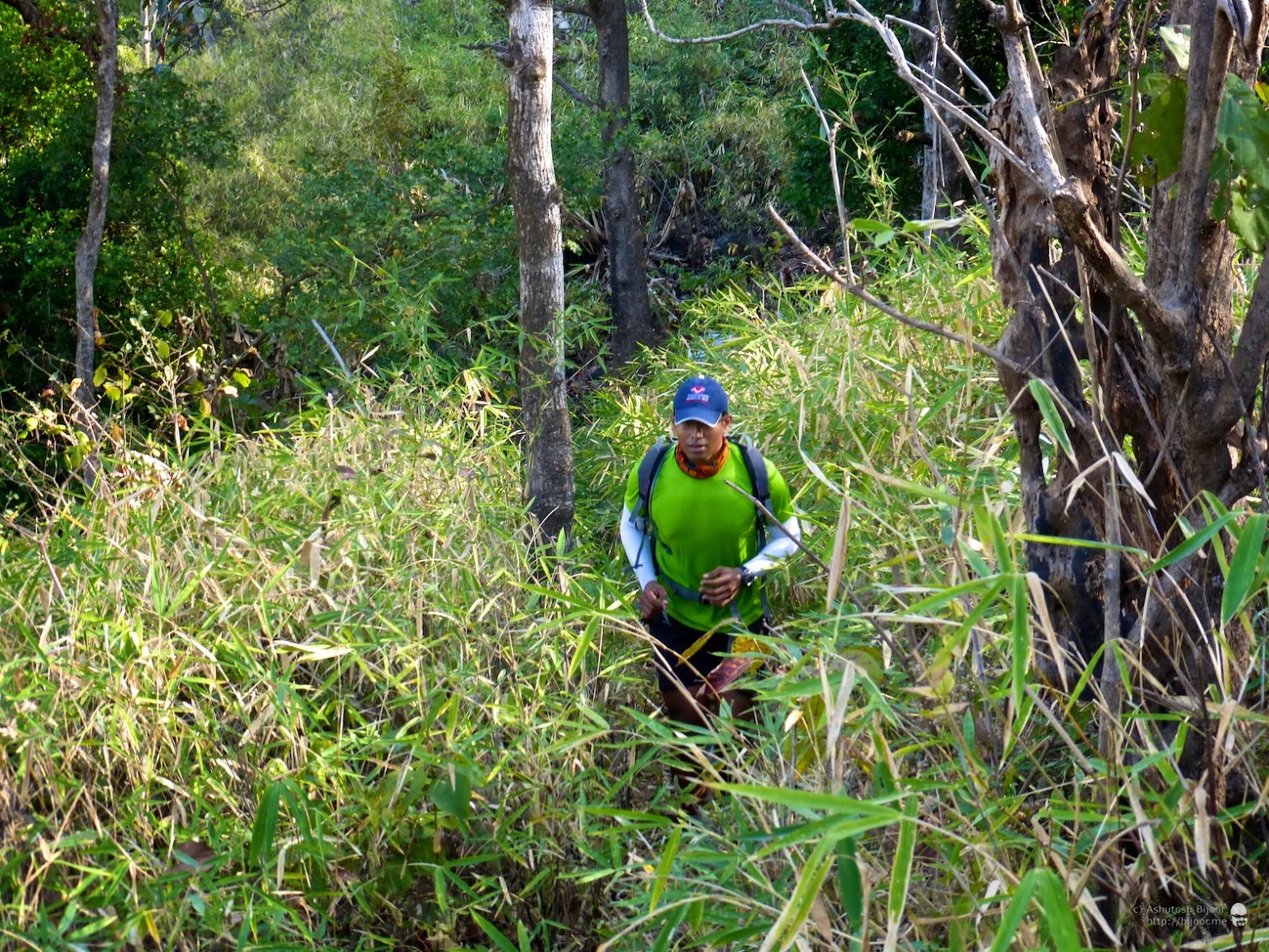 Luckily we found a villager lady in the forest who was collecting firewood, who gave us the news that we had strayed far from the actual path, and guided us to an alternate path that took us through thick bamboo bushes towards the top of the hill 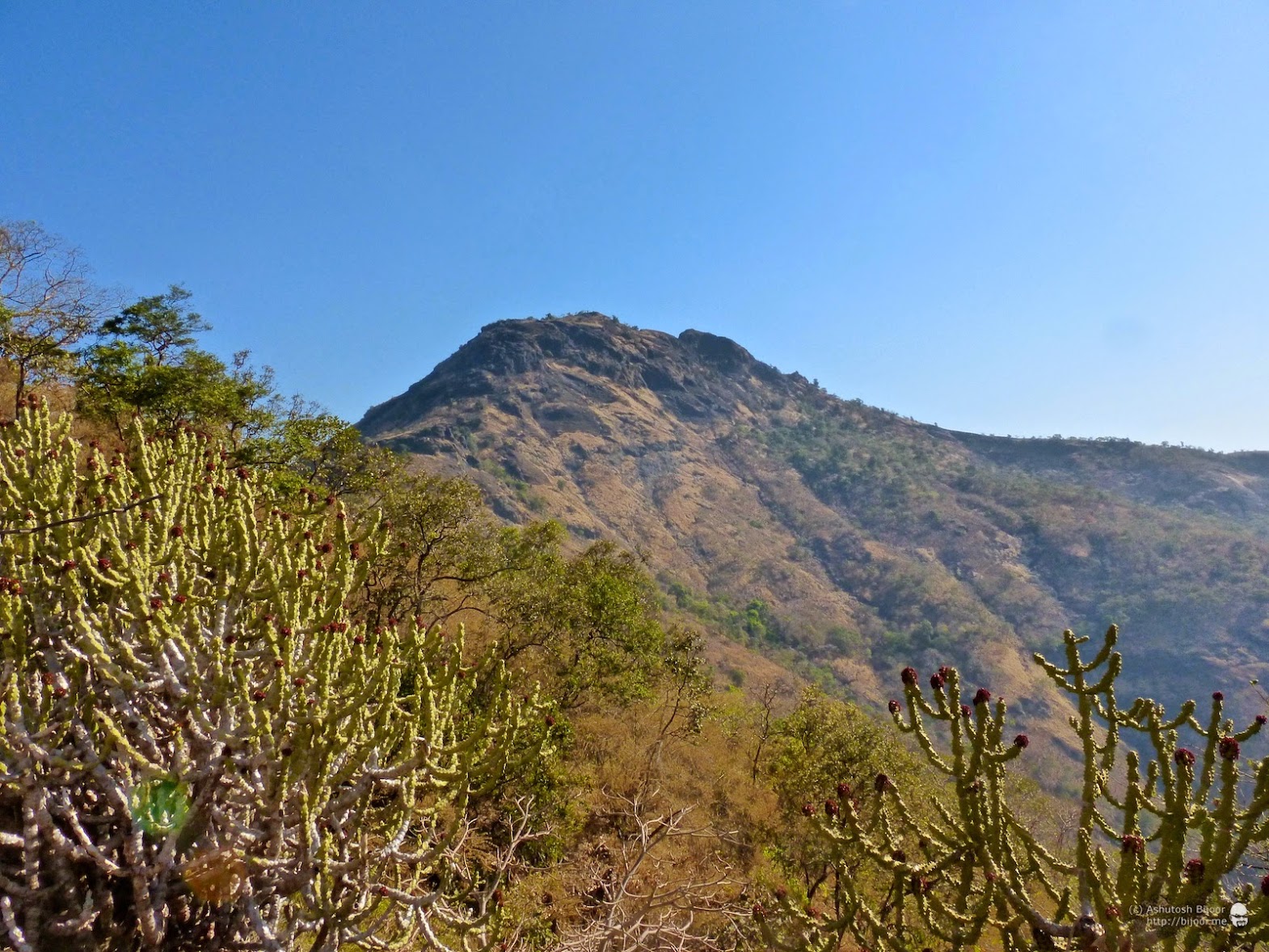 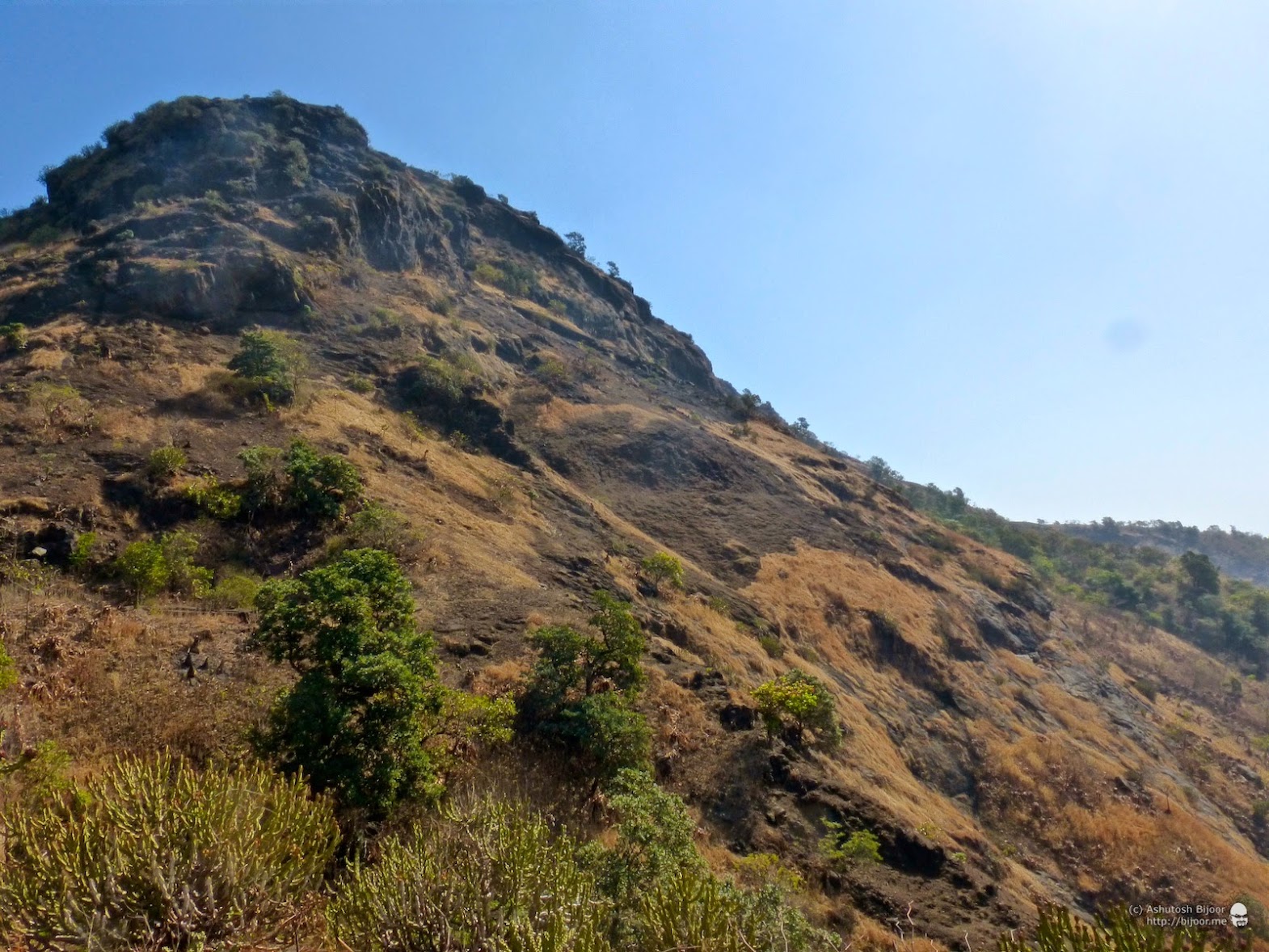 As it turned out, the hill top we had seen was not the final destination – there was another peak ahead that we had to get to by climbing about 100 meters down and back up again – this was turning out to be quite a tiring trek after all, but we managed to reach the top

And then we were rewarded by this amazing view of the Vasai plains below, with Ulhas river meandering towards Vasai creek, with Vasai town on one side and Mira Road on the other. Kamandurg has no fortifications left – but it has been referred to in the history of Mahikavati – of King Bhimsen’s rule and was referred to as Kamavandurg, and later in the Maratha history when the Maratha leuitenant Shankaraji Pant guarded the fort under the famous Chimaji Appa (ref) 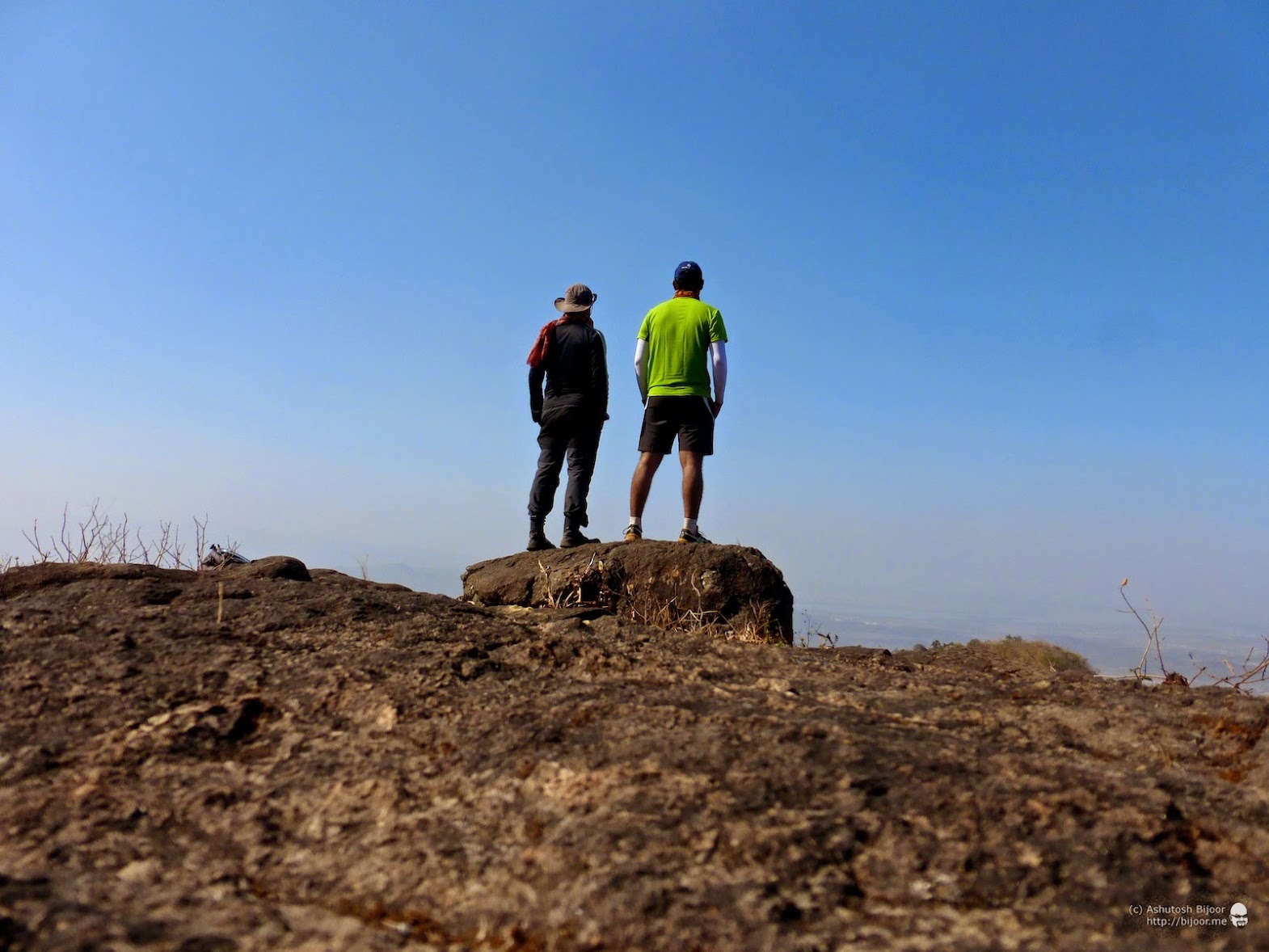 We stood there mesmerized by the view, and relieved to have made it here after getting lost on the way. But it was surely an unexpected adventure. 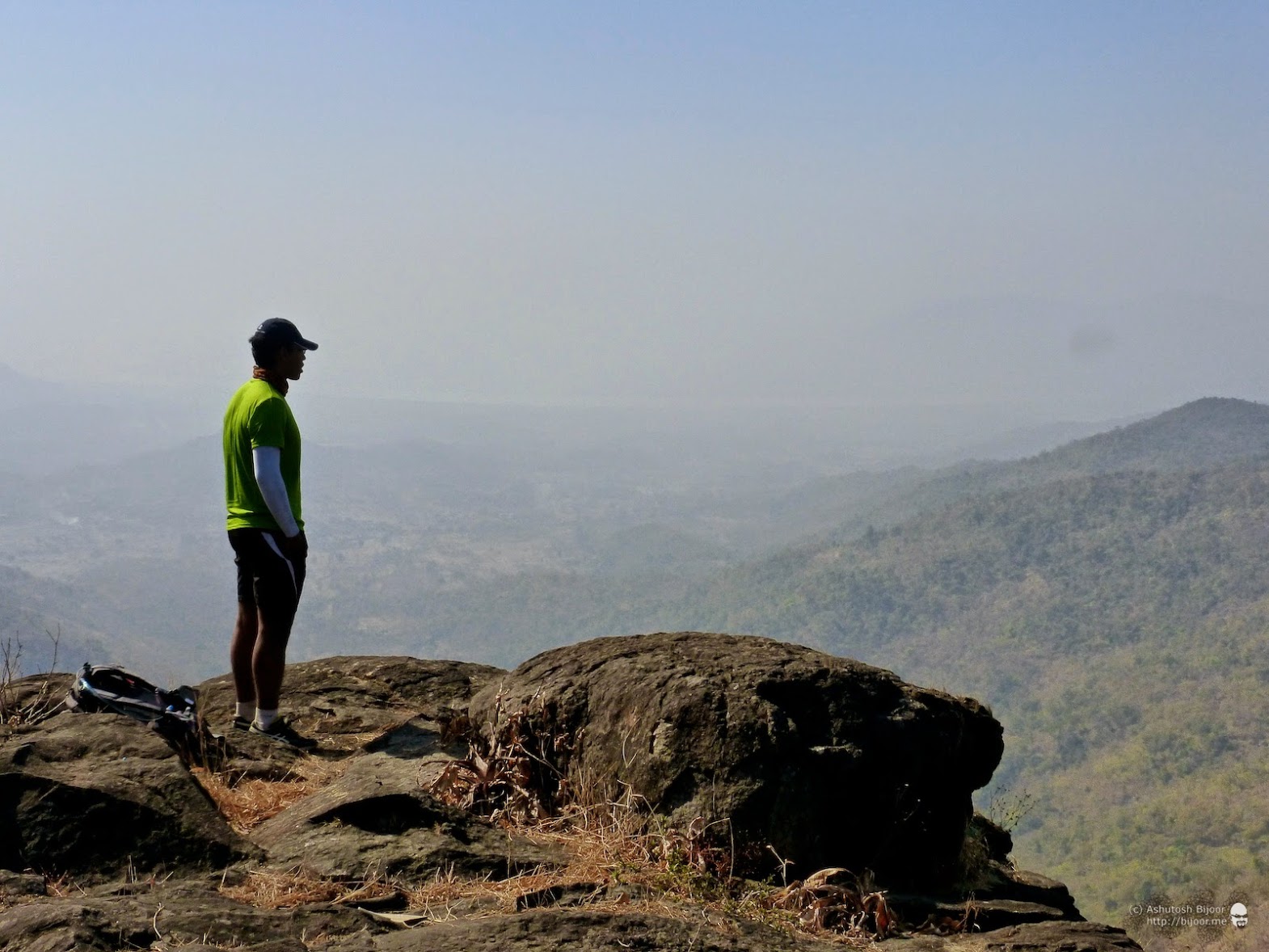 Though the sun was now beating down on us, there was a cool wind blowing and we enjoyed its whistling sound that provided a nice background to the chirping of birds in the forest below 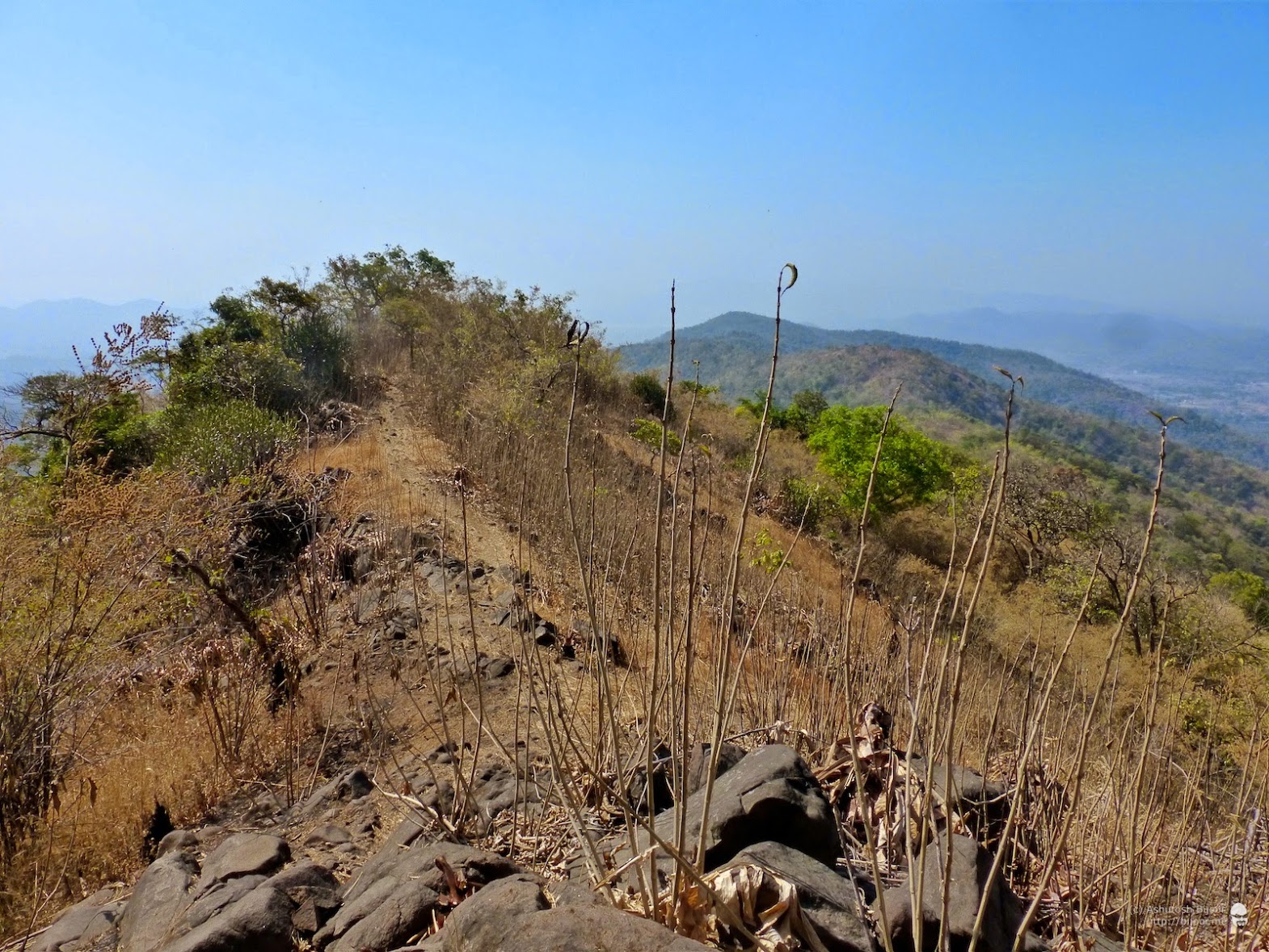 Then it was time to head back downhill, and this time we made sure we followed the right path down, noticing the arrows that marked the path clearly… we were eager to find out where we had missed the path on the way up 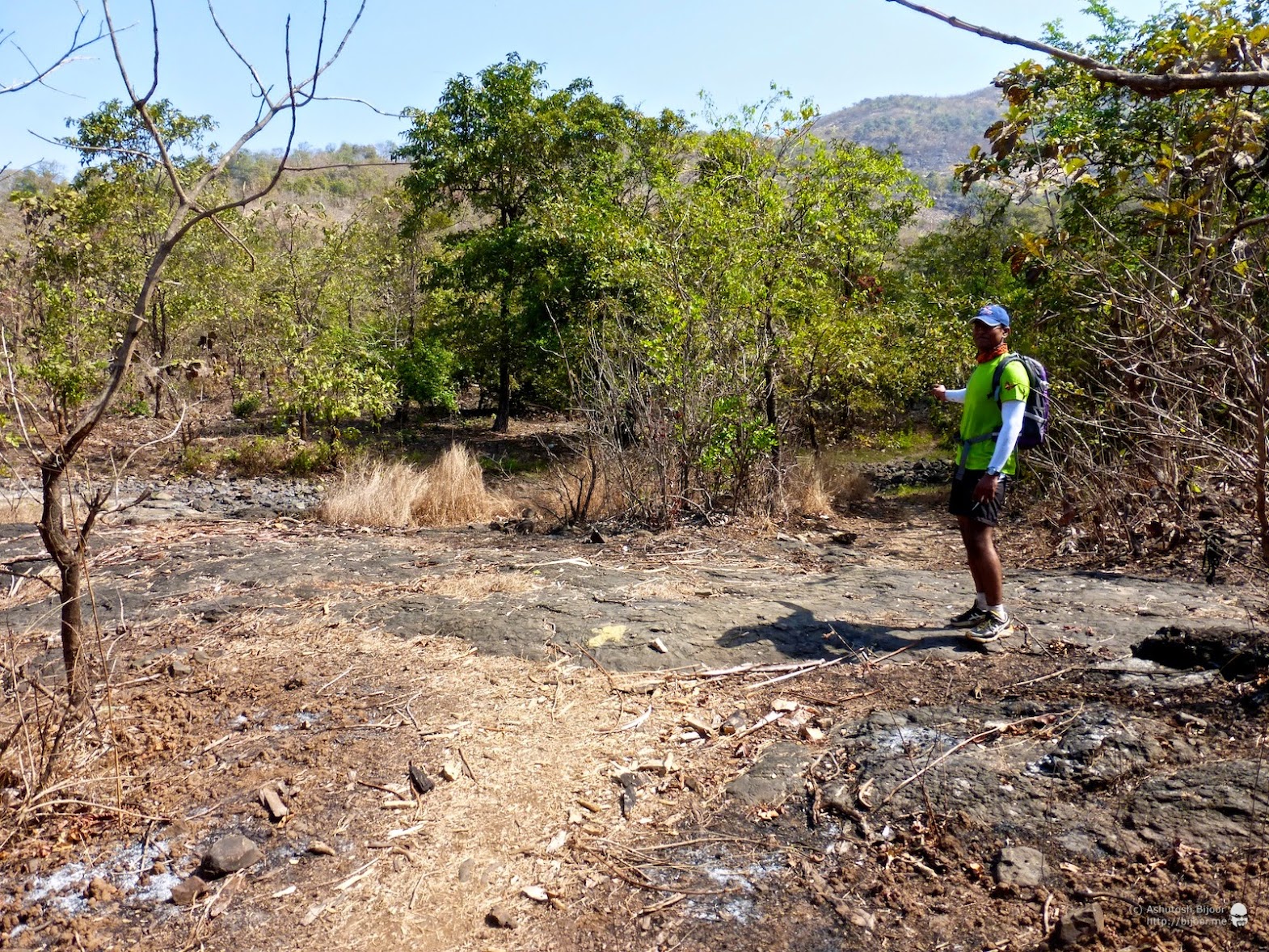 … and we did find it… we had missed a small path that led to the left while going up, and we had taken the broader path to our right… oops! 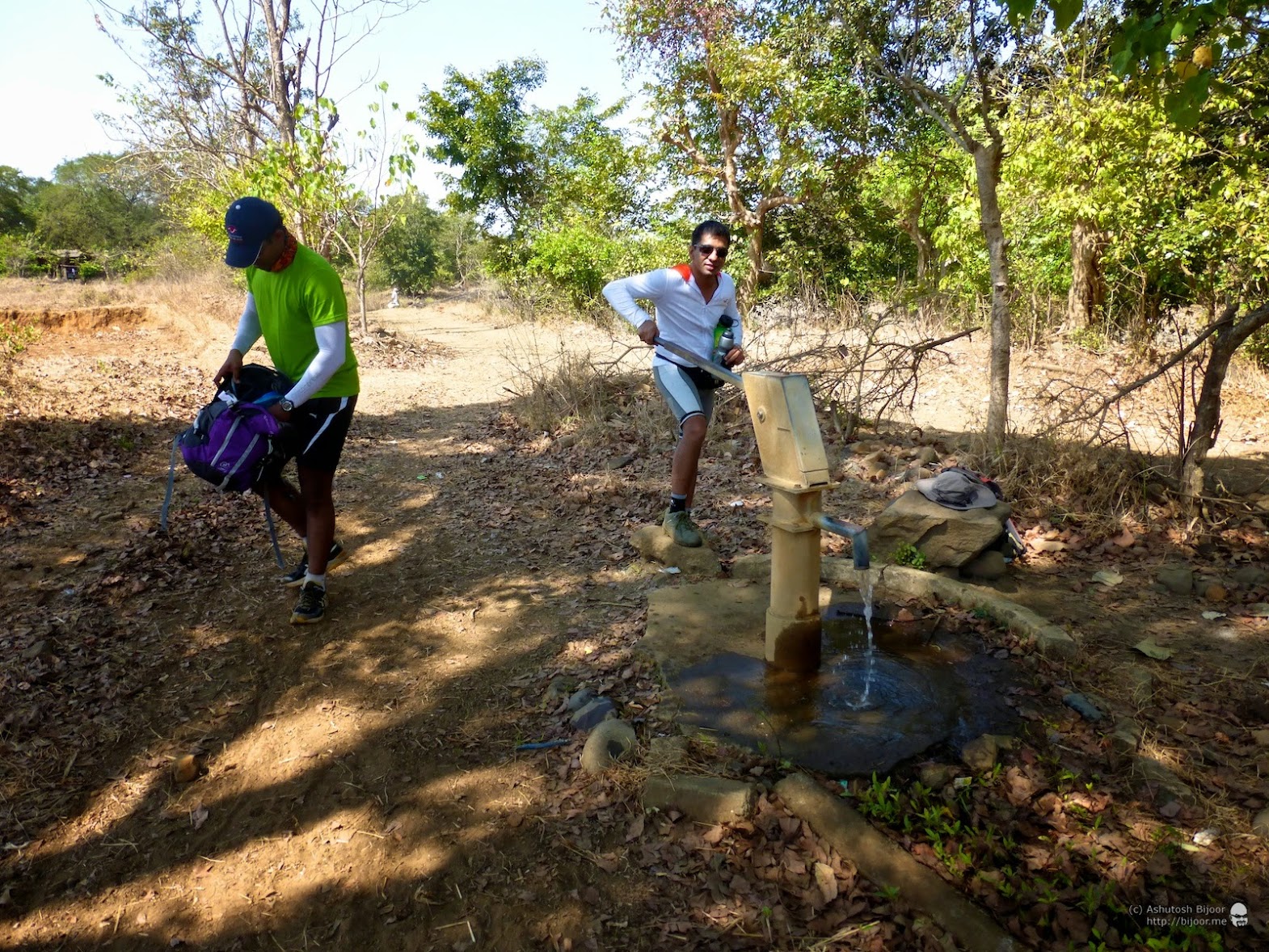 Due to our detour, we had also run out of water and were glad to find this bore well pump that we used to wash ourselves and refill our bottles 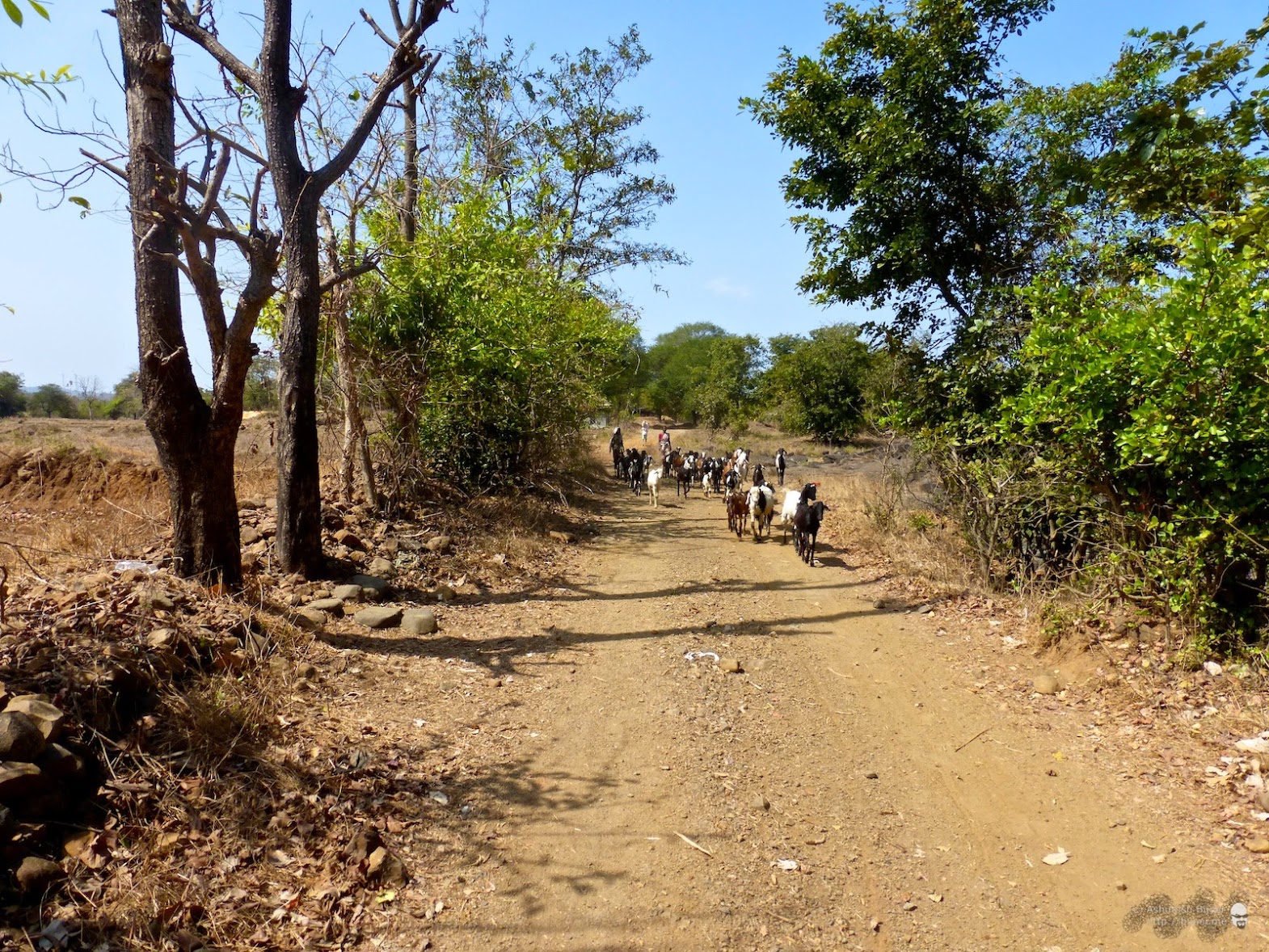 We were back on the broad path near Devkundi, and passed this herd of goats that were being taken out for grazing by the goatherds. Hard to imagine that such an idyllic place is just a few kilometers away from the hustle and bustle of the busiest cities in India 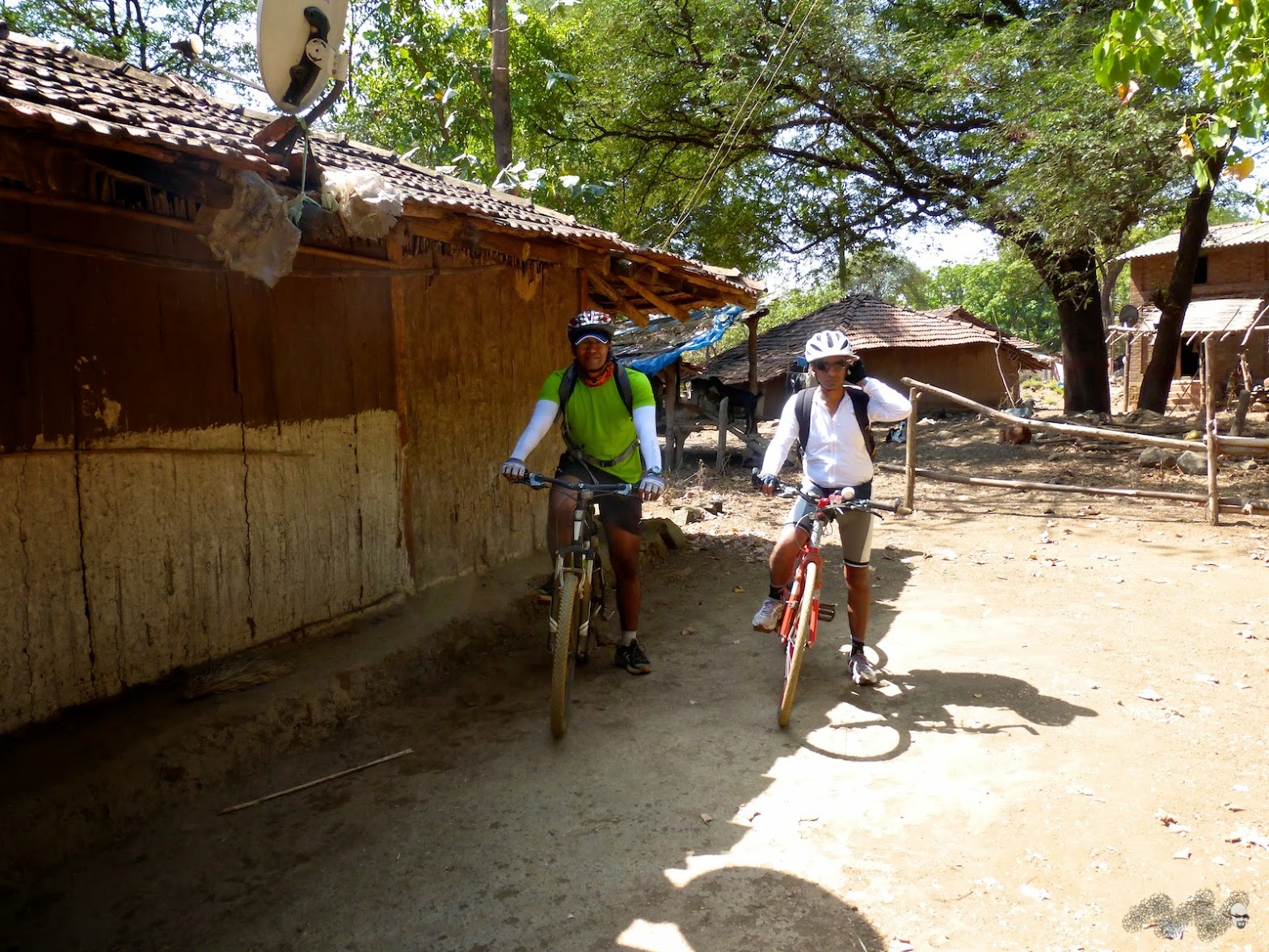 Back and Devkundi, we got back on our cycles and headed back on the off-road section towards Kaman 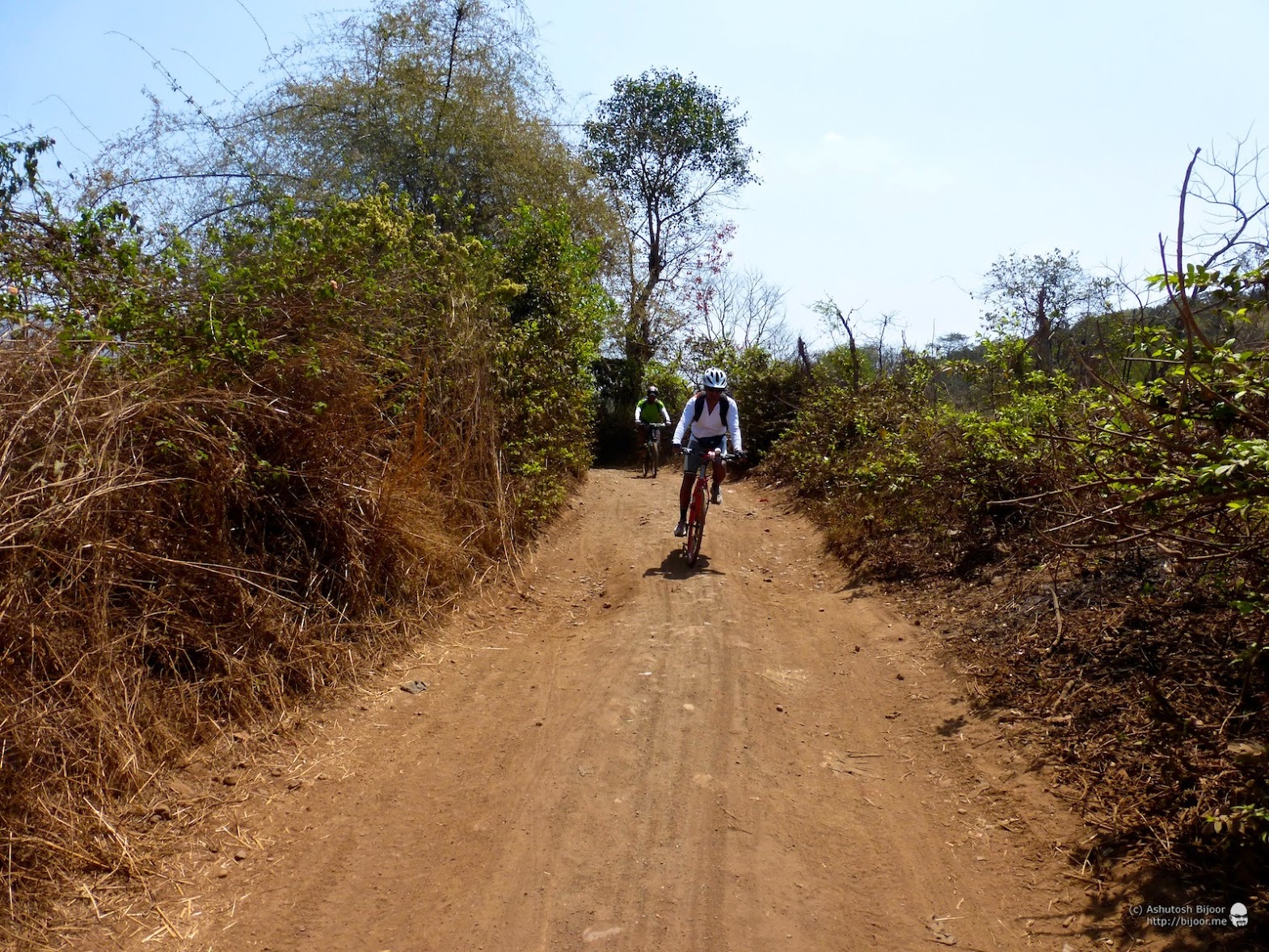 On the way back we took a short cut from Kaman that went straight to NH8 near Nagle without having to go back to Chinchoti junction – we enjoyed the bonus off-road section!

This is the route we took on the way – from Andheri via Western Express Highway, crossing Vasai bridge to NH8 till Chinchoti junction, then turning right on Chinchoti-Anjur Phata road till Kaman, and final off-road section till Devkundi, about 40 km one way

The trek will be even better if done in the monsoon! So looking forward to doing this route again – hopefully without losing our way next time 🙂

After a period of lockdown due to the Corona Virus, we were looking forward to doing a trek now that the lockdown is relaxed. We decided to repeat the Kamandurg Trek. We gathered a group of enthusiastic trekkers and set out early on a Sunday morning. Finding Devkundi was slightly difficult, but the arch of Kaman was a clear landmark. From there, Devkundi is a winding and bad road, and best navigated by two wheelers or on foot. We were lucky that the weather was almost like monsoon, with light showers, even though it was winter. The trek was fabulous! Here is a video summary of the trek:

And here is the route map starting from Devkundi: