I had visited Madh fort on 1st January 2013 as a result of my new year resolution of cycling to all the forts and other historical sites in and around Mumbai. Madh fort is normally kept closed and is not open to visitors. However they do let out the fort for shootings of films and television serials. On this weekend I had the pleasure of riding with my cousin Hemant who was visiting from the US, and we did a short ride to Madh via Marve. I could not resist taking him to the fort, and was pleasantly surprised to find that it was open and preparations were on for the shooting of some television serial.

A short history of Madh Fort:

In the beginning of the 17th century, as the Portuguese started acquiring Salsette and Versova, they built the Madh fort. The records of 1720, mention that the Madh fort is very narrow and deep. It is also said to have the best bay on the coastline. In 1728, Madh fort was functioning poorly. A treaty was signed between Marathas and Portuguese in 1732 in which the Marathas demanded the handover of Versova. In 1774, it again fell into the hands of Portuguese and later at the beginning of 19th century, when the military colleges at Colaba and Mahim were closed down, Madh became the training centre for new recruits. Till 1818, there was an army base here, and after Independence it came under the authority of Indian Air Force. 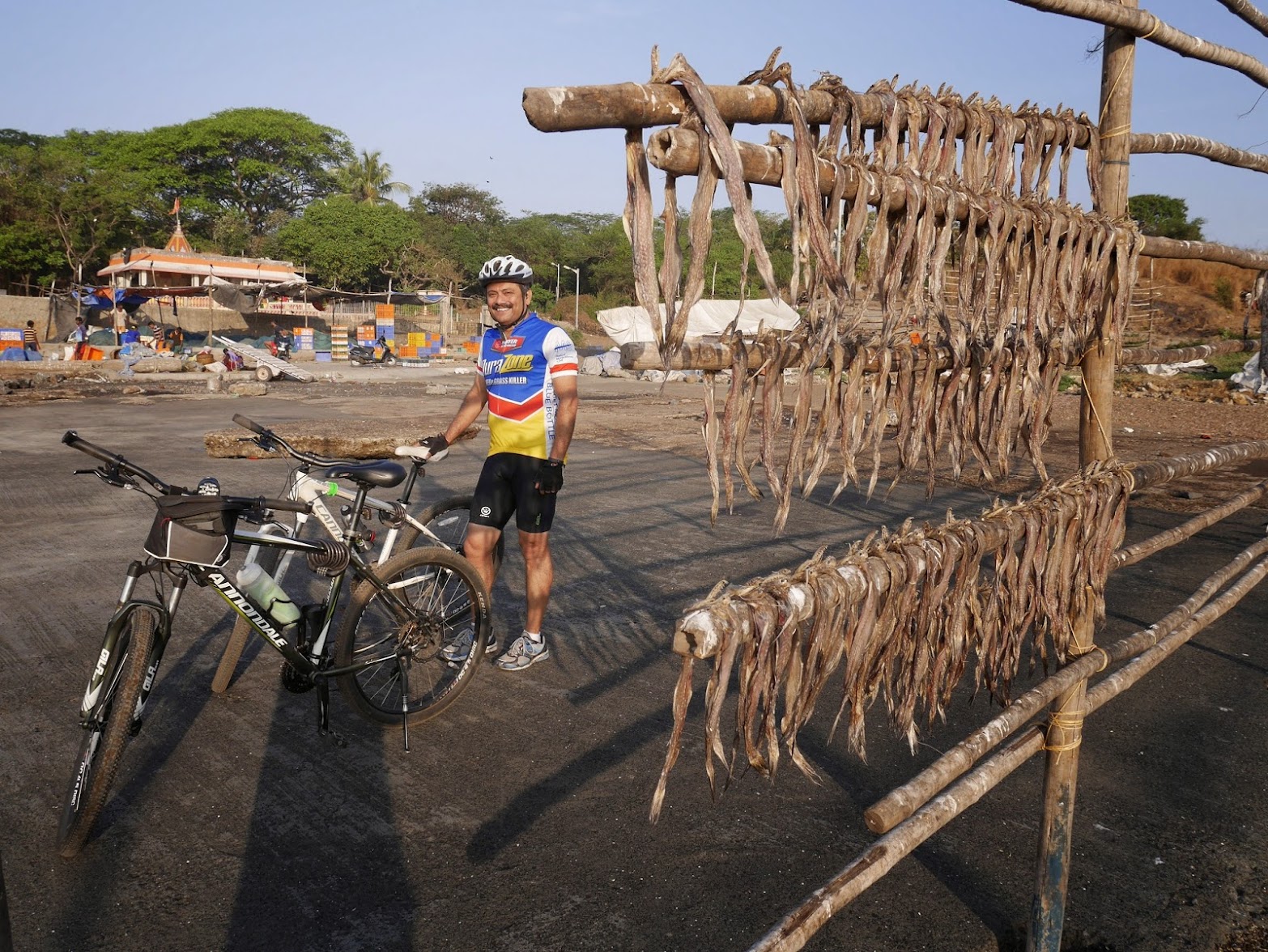 We rode to Madh via Marve, and arrived at the fishing jetty to witness all the fishing boats unload their precious cargo. These fish at the famous Bombay Duck or Bombil fish that is a delicacy when fried. It is also sun dried on bamboo stands such as the on in this picture, and the dried fish let out a powerful distinct odor 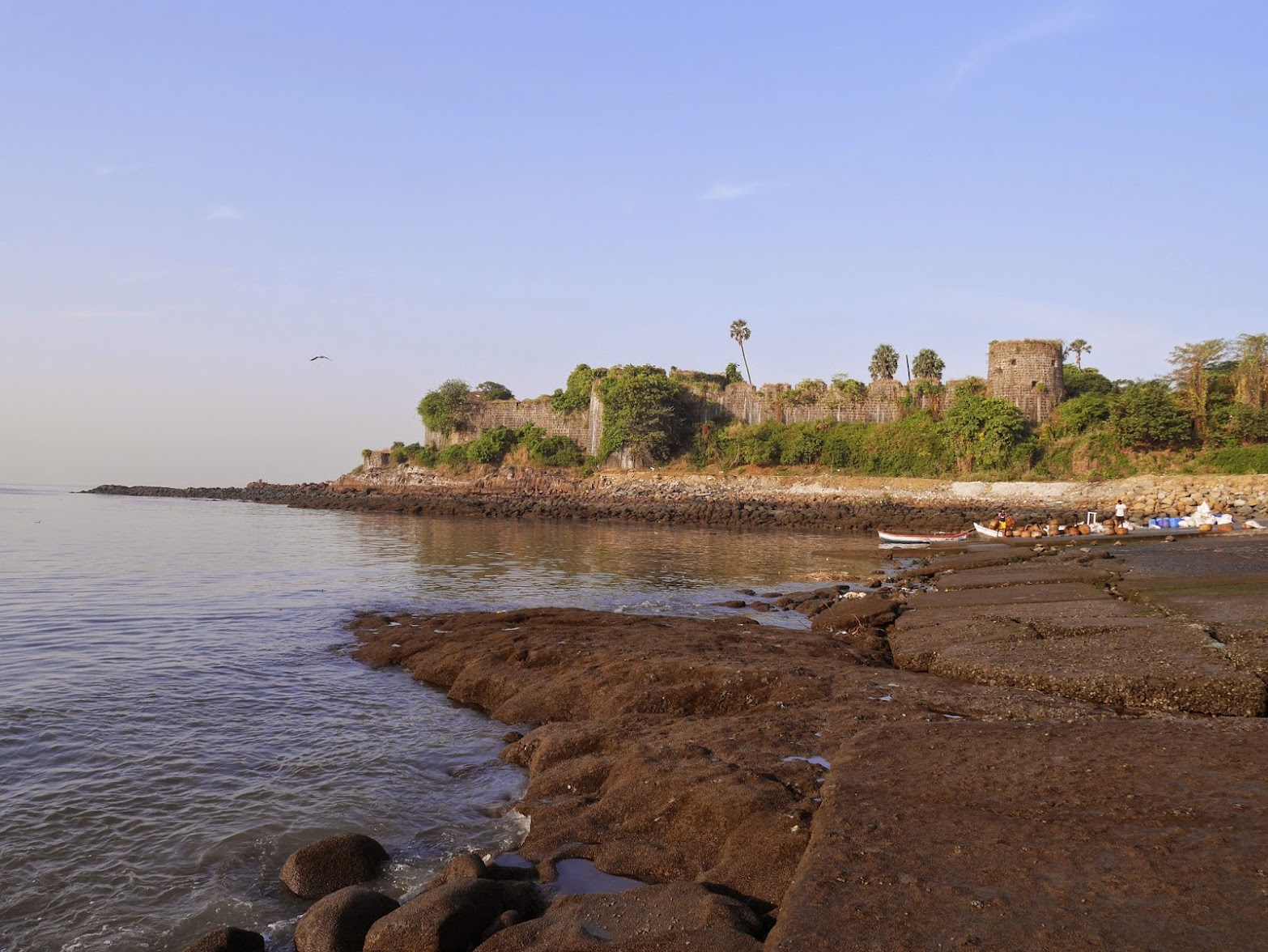 The fort juts out on a small peninsula beside the jetty, and seems to be largely in tact, with its ramparts and bastions standing imposingly along the coast 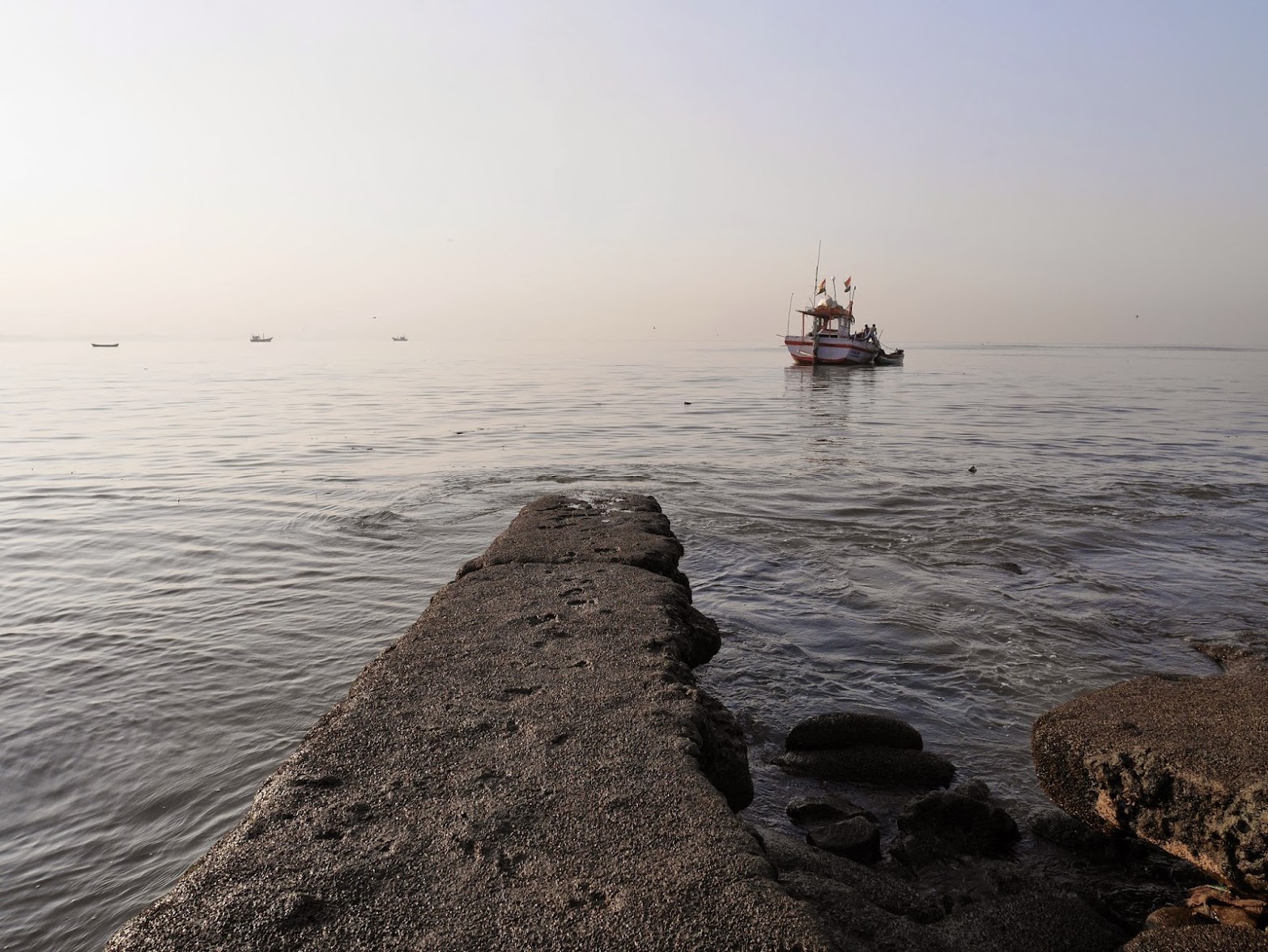 The blue waters of the Arabian sea seem to mix with the golden rays of the rising sun, and the fishing boats lie in it peacefully, after a successful morning harvest of fish 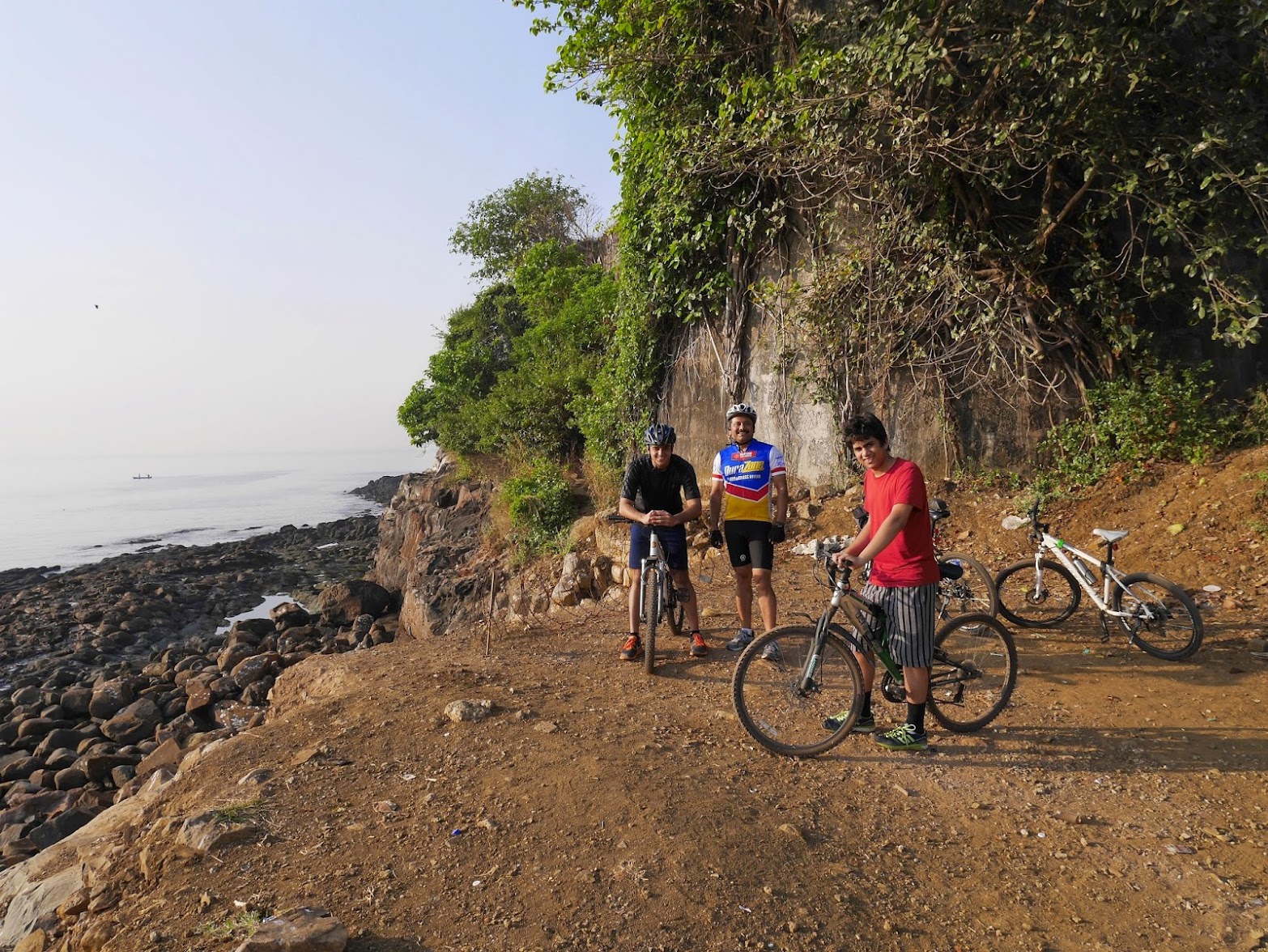 We met two other young cyclists who had ventured out for their first long ride. It is truly nice to see so many youngsters taking up cycling. While talking to them, we noticed a few people walking on the ramparts of the fort above, and came to know that there was some shooting going on, and the fort was therefore open! 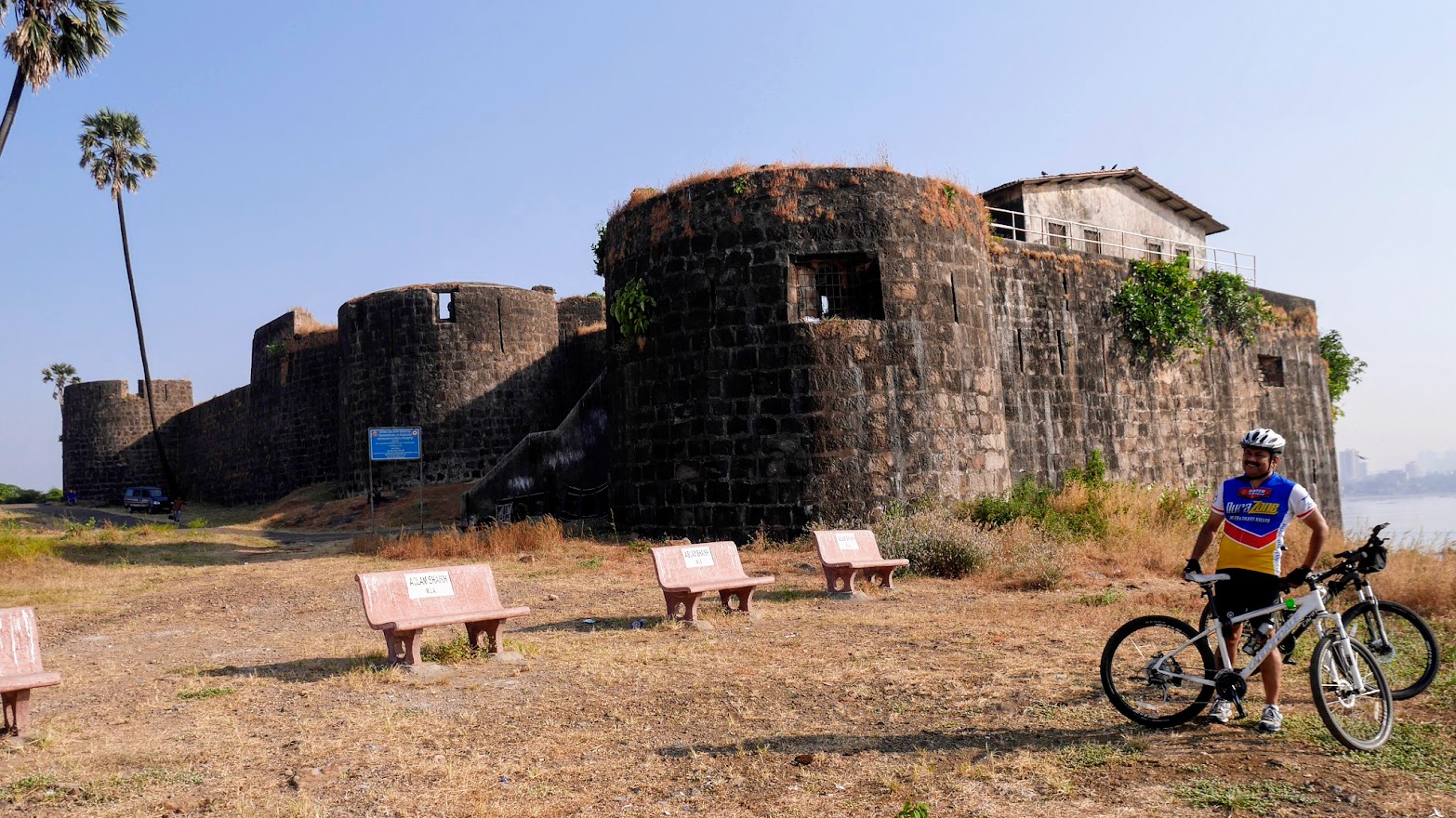 We rode over to the fort, and indeed found that there were preparations going on for shooting of some television serial. We locked our cycles together outside and went in to take a look. 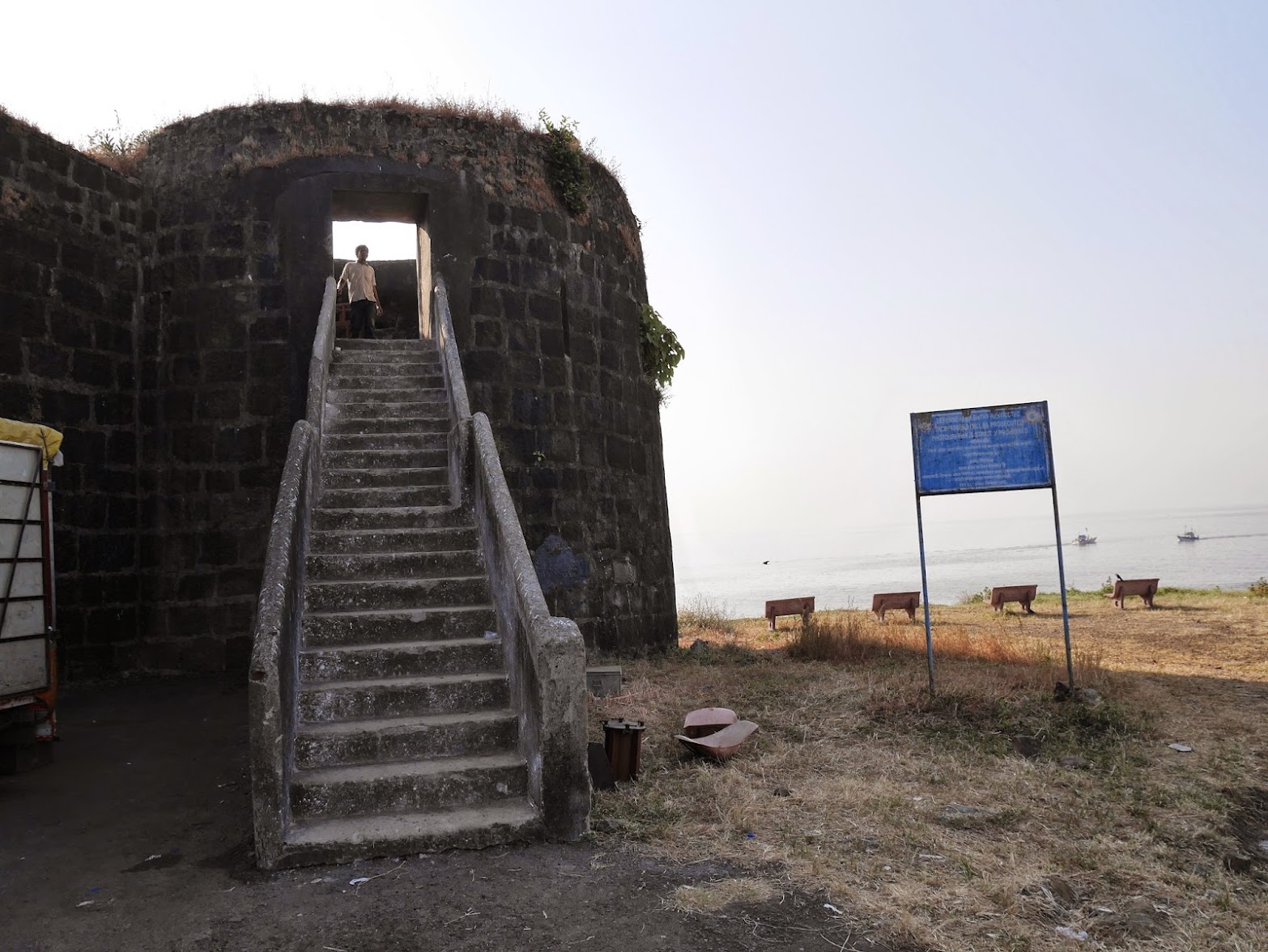 These stairs lead up to the entrance from one of the bastions. The door is normally locked, but it was open today and the shooting crew were busy moving props and equipment into the fort. 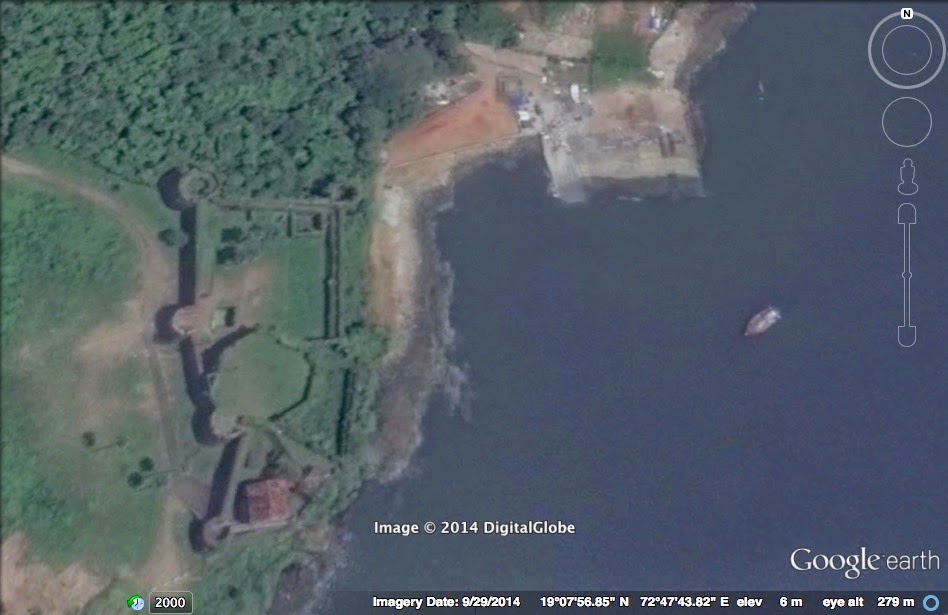 If you look at the fort in Google Earth, you can see that the fort has a very interesting shape. It is a seven sided polygonal structure, with bastions at each corner, with one large circular bastion in the middle. A large rectangular courtyard flanked by ramparts on all sides is to the north, while beside the circular bastion there are two other smaller areas. The bastion at the southern most tip is where we entered. 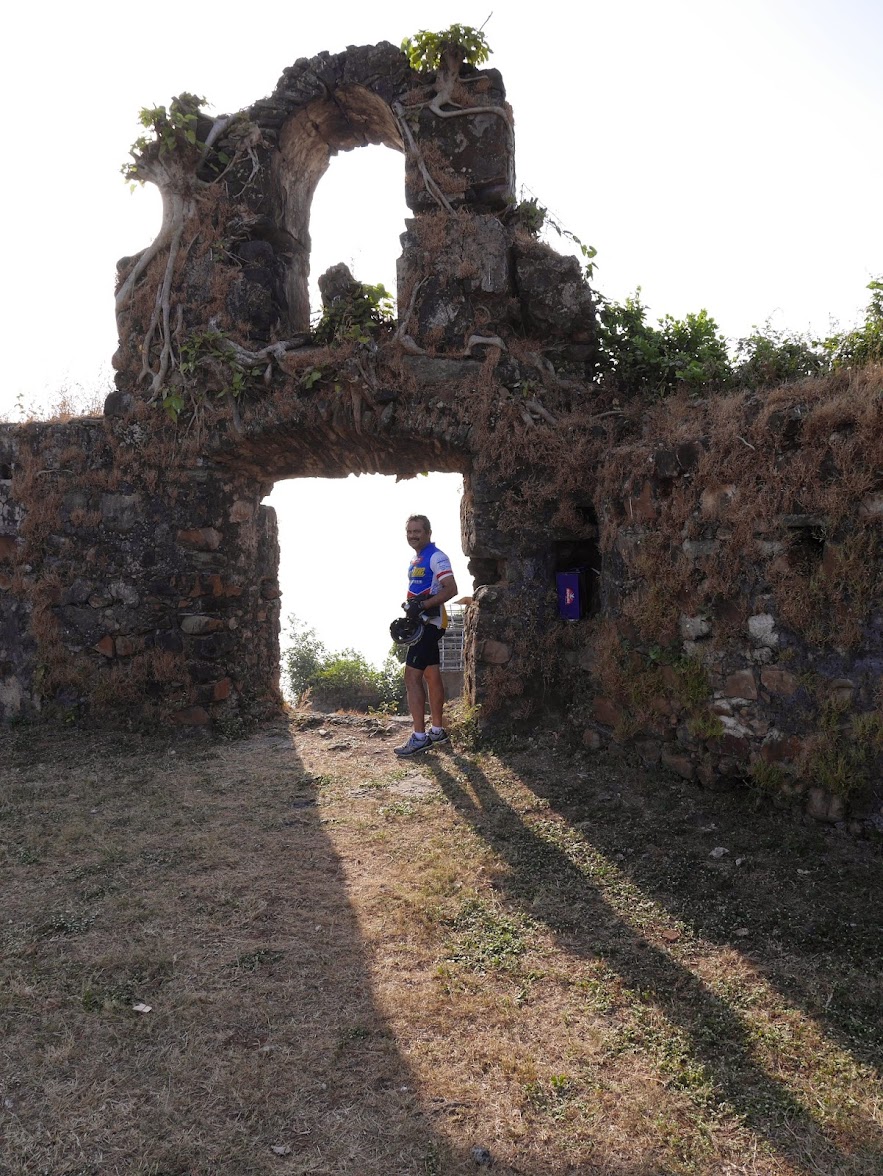 We walked over to the large circular bastion in the middle, and noticed that the walls around it were broken with a few remaining structures that seemed to have been restored 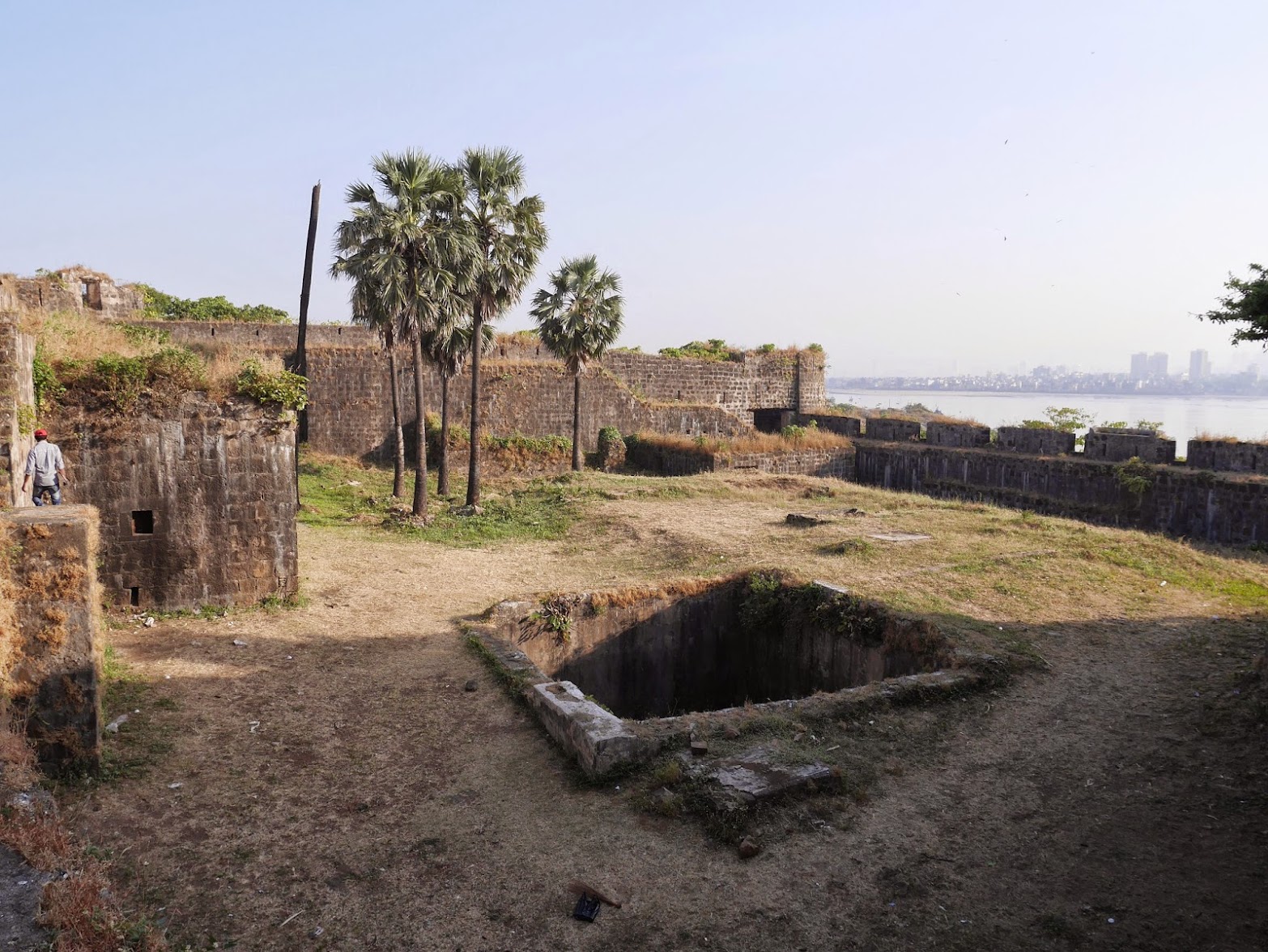 The large rectangular courtyard had a big water tank on one side, with a row of chambers to the west and an open area to the east, flanked by ramparts that looked over the Arabian sea. 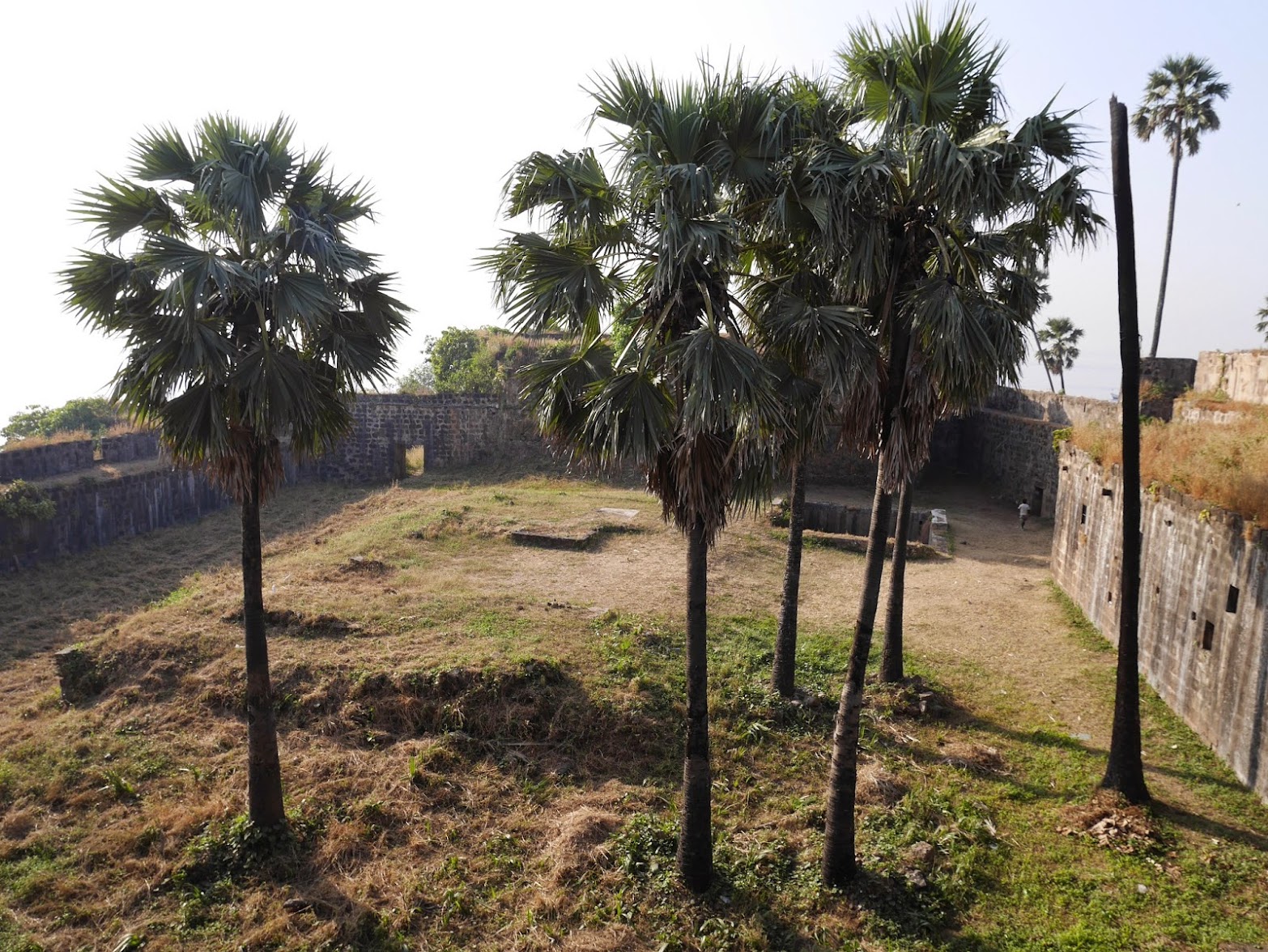 We walked on the ramparts all around the courtyard, enjoying the view of the Arabian sea and the cool sea breeze that compensated for the heat of the sun 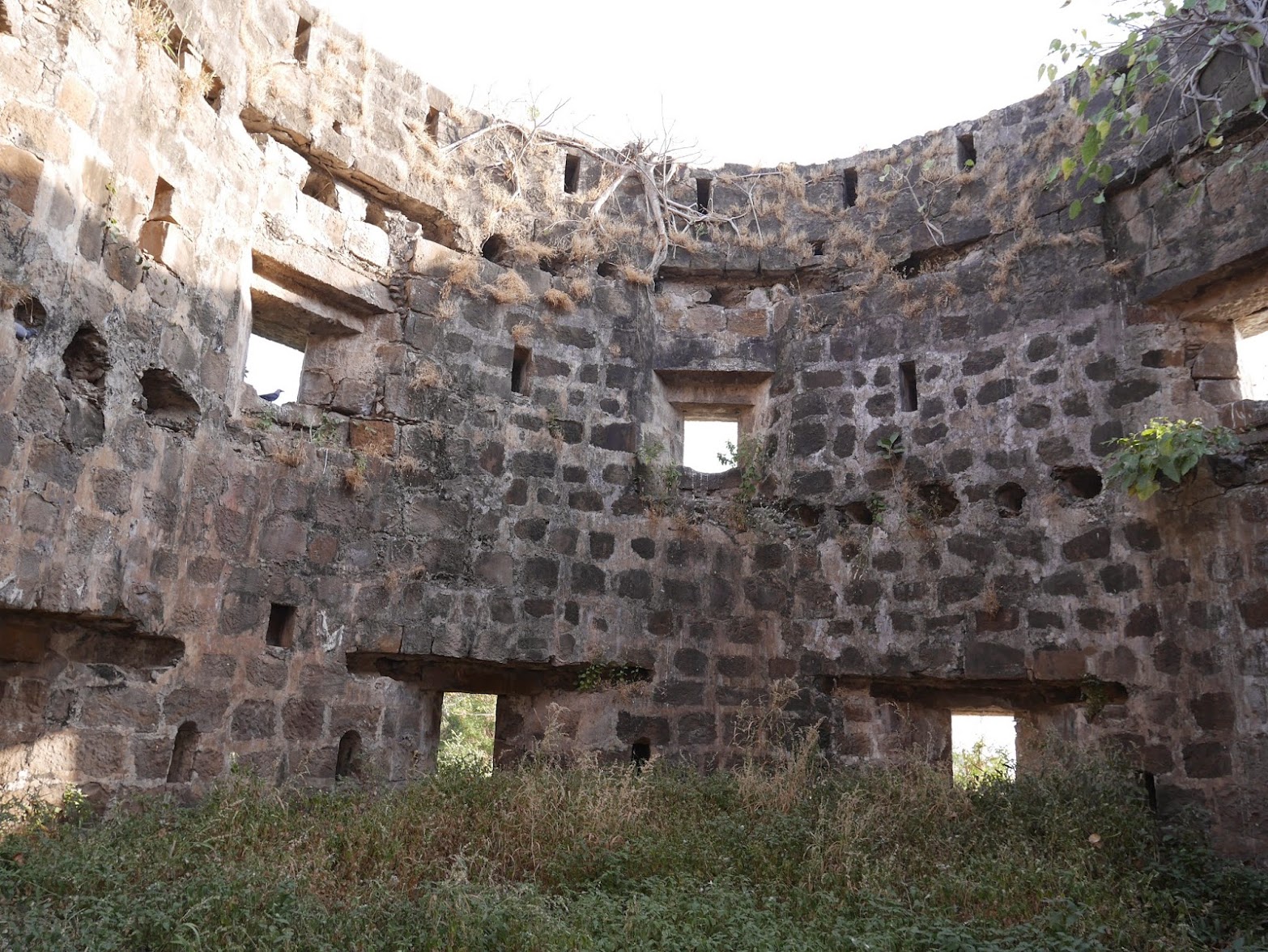 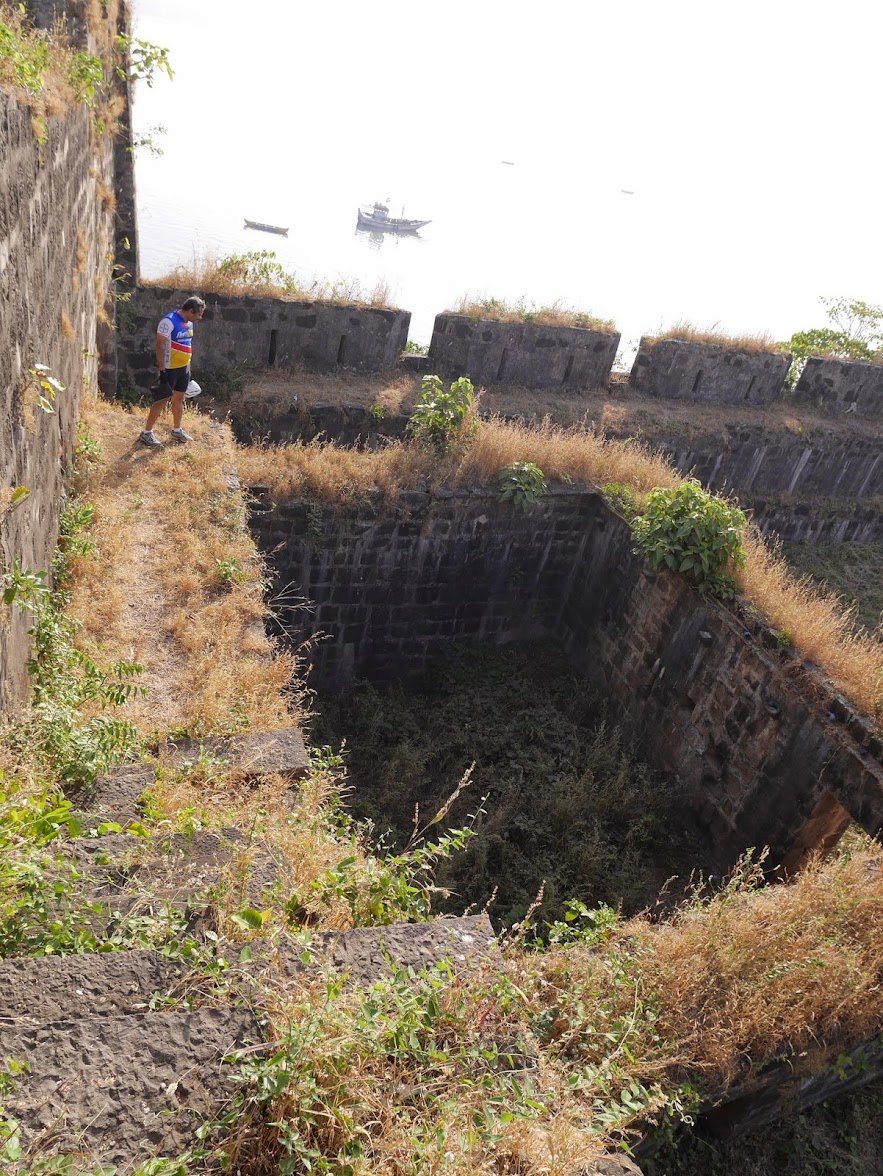 Most of the internal structures are not in tact, and are overgrown with wild shrubs and trees 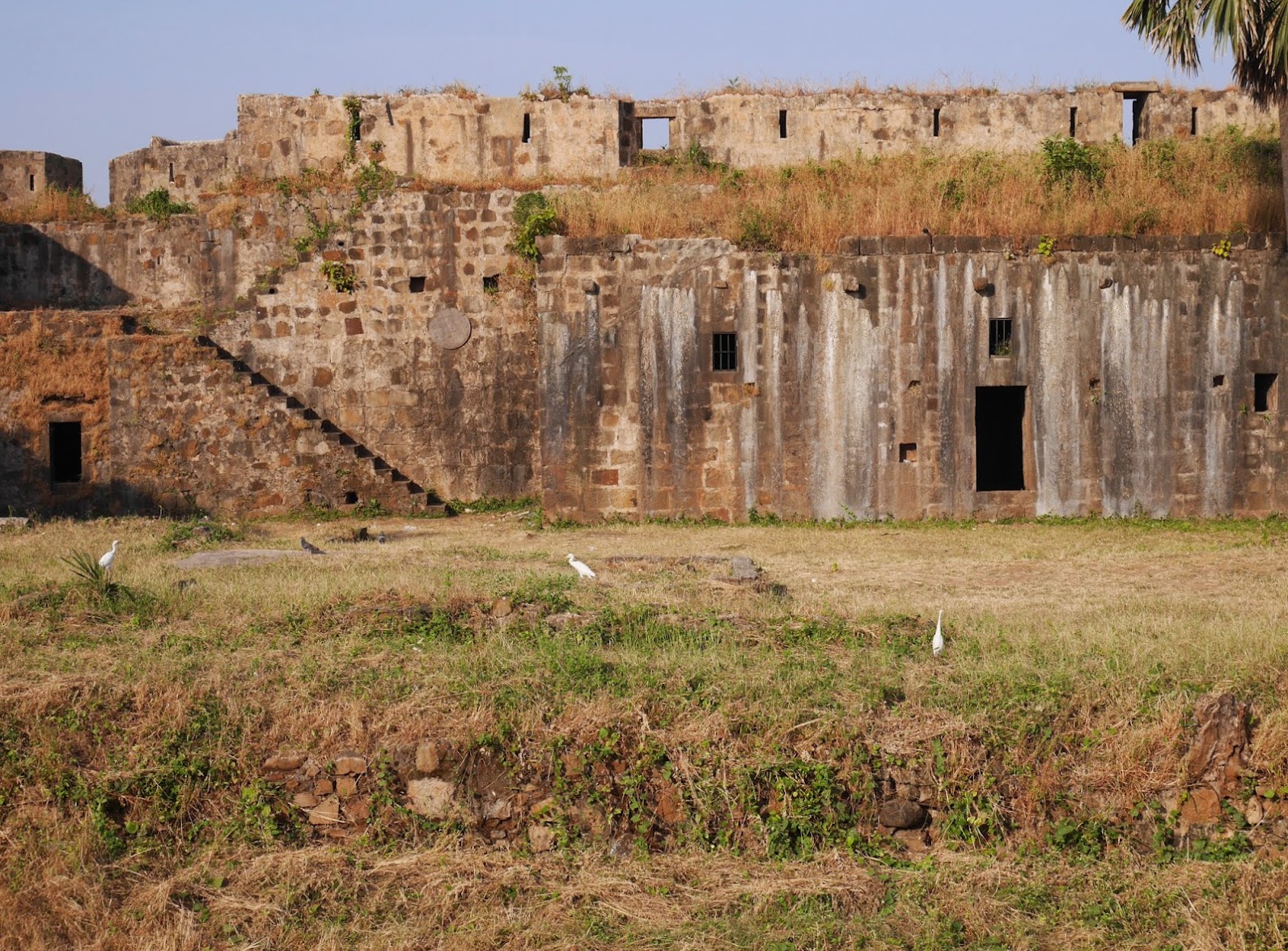 However the chambers at the western face of the courtyard seemed to be in tact, with a series of doorways along the entire length 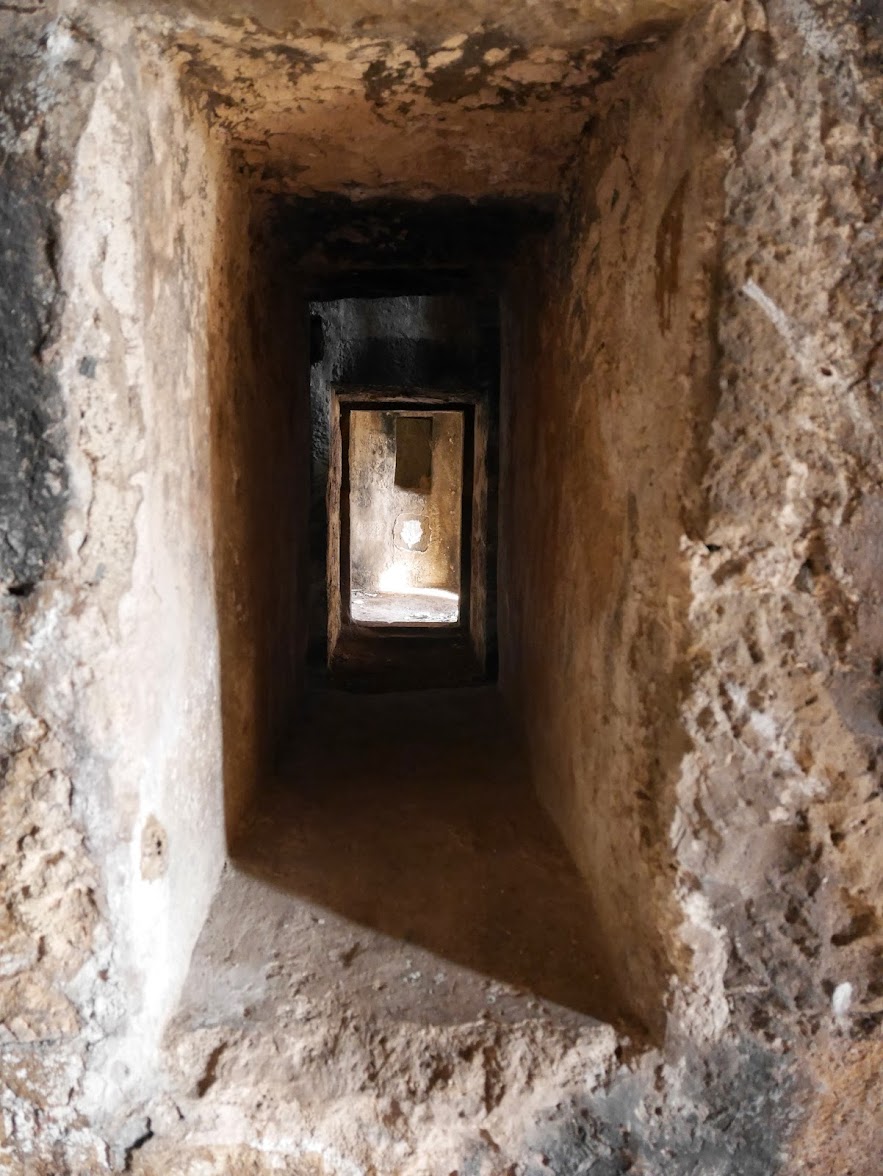 As we entered the chambers, we could see that there were a row of rooms, connected to each other with rectangular windows that allowed the air to circulate throughout. 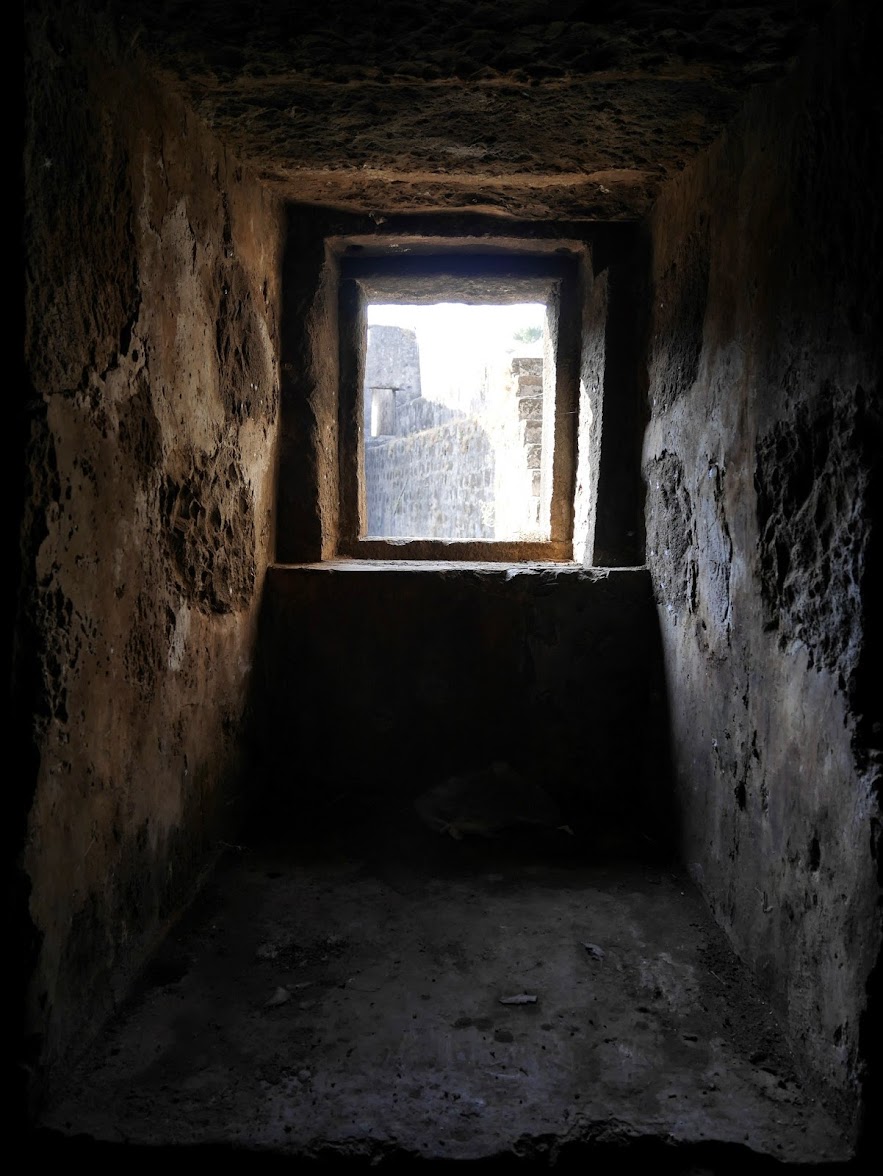 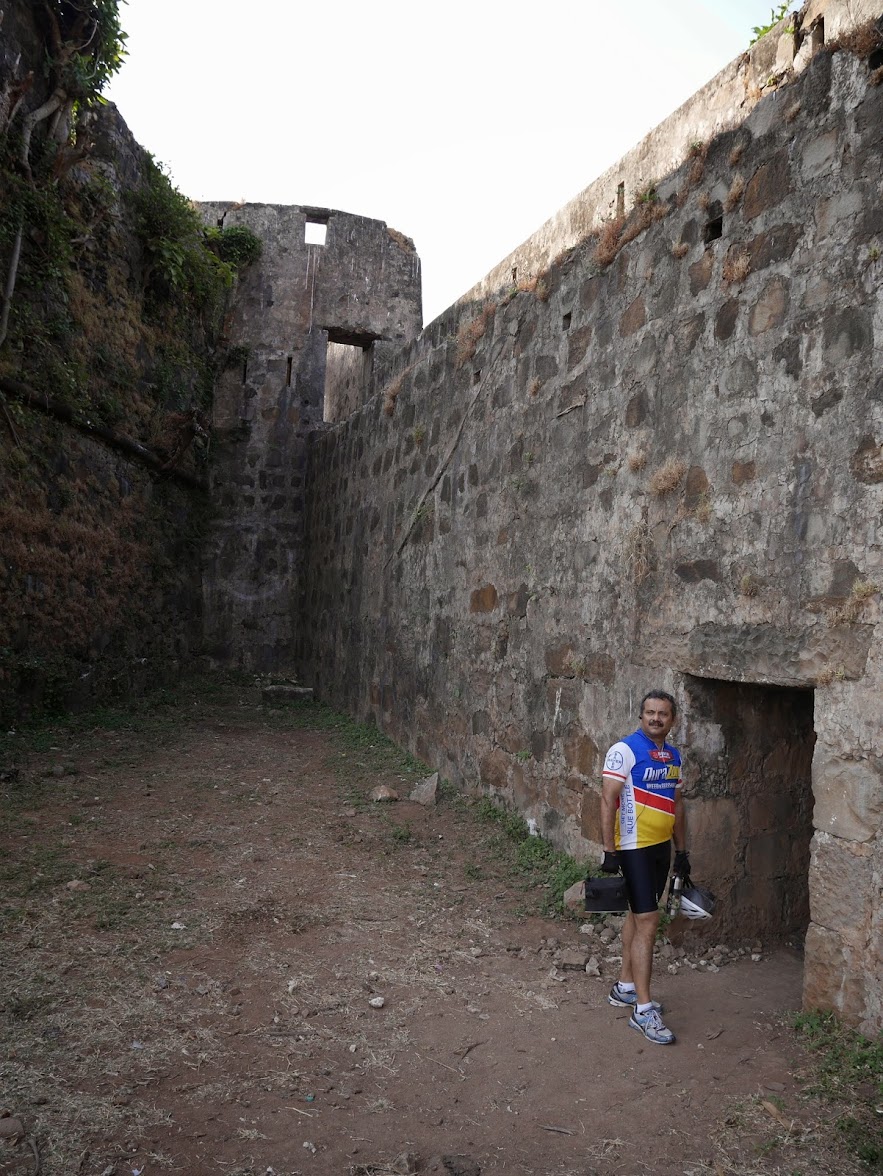 We found a small secret door that led directly outside the fort, and exited from it 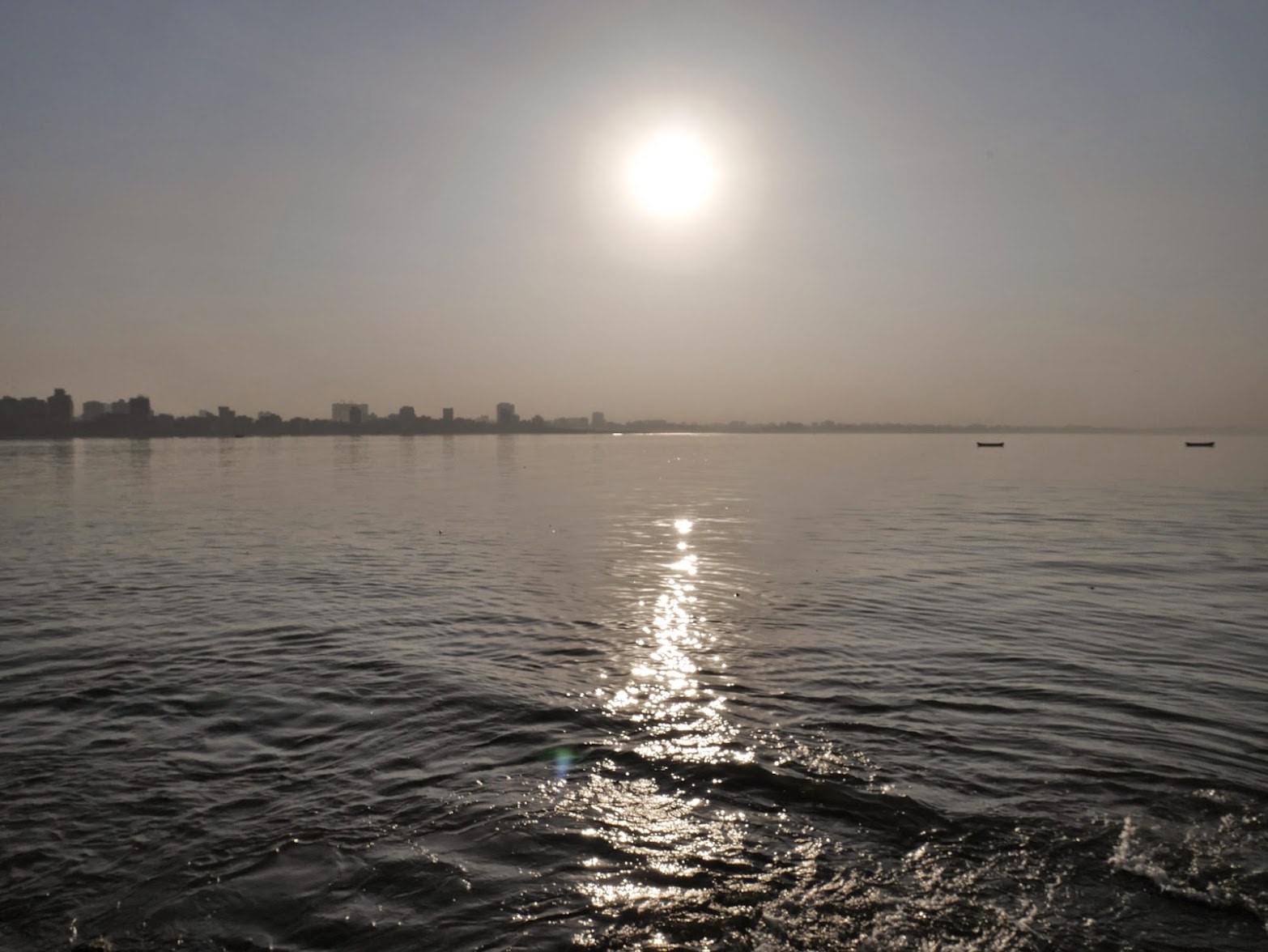 We were so lucky to get a chance to see the fort from inside! But now it was time to head back. The sun was rising fast and it was slowly getting hot. We took the ferry across to Versova and headed back home, satisfied after a short but fruitful ride.

This is the route we took – from Andheri via Western Express Highway, then crossing over to Link road and to Marve, then along the coast to Madh Fort, then across the creek to Versova to head back via JP Road