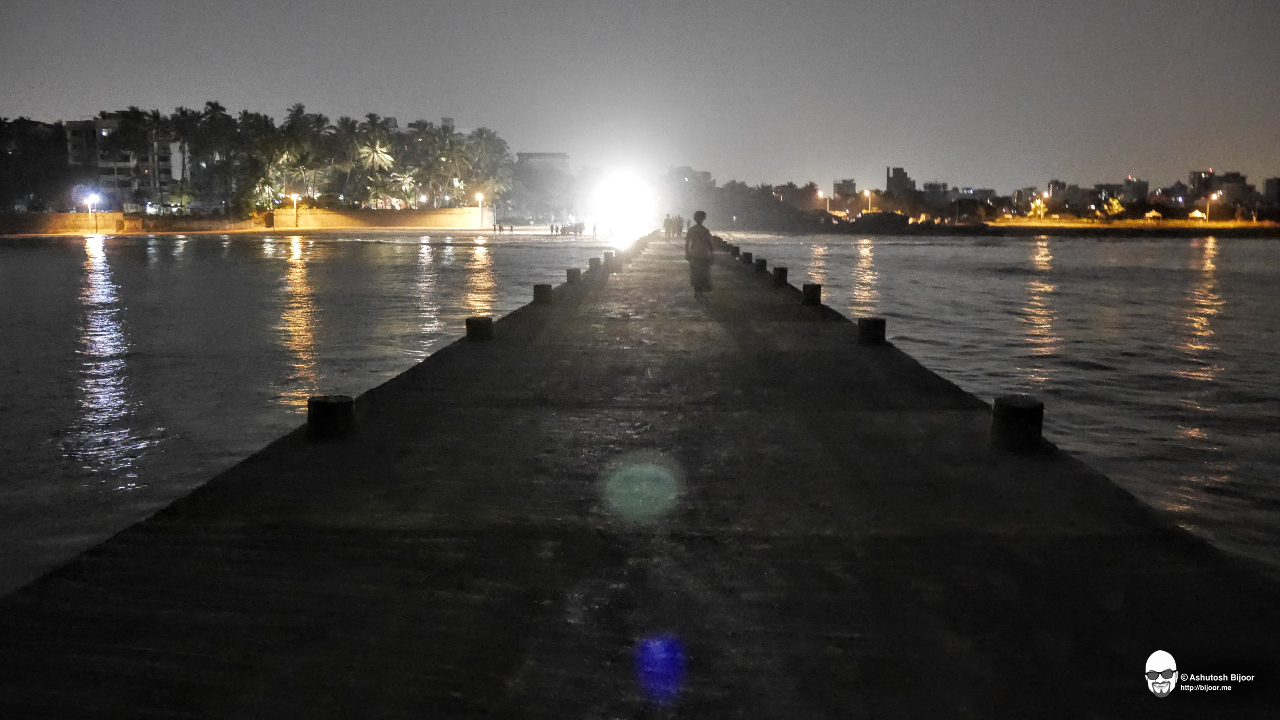 First spotted by Nilesh Mane, a wild life photographer from Mumbai, Juhu Beach attracted a lot of attention for the bioluminescence that Nilesh captured in his photograph below.

After seeing the article in NatGeoTraveller, we were keen to go and see the phenomenon ourselves. 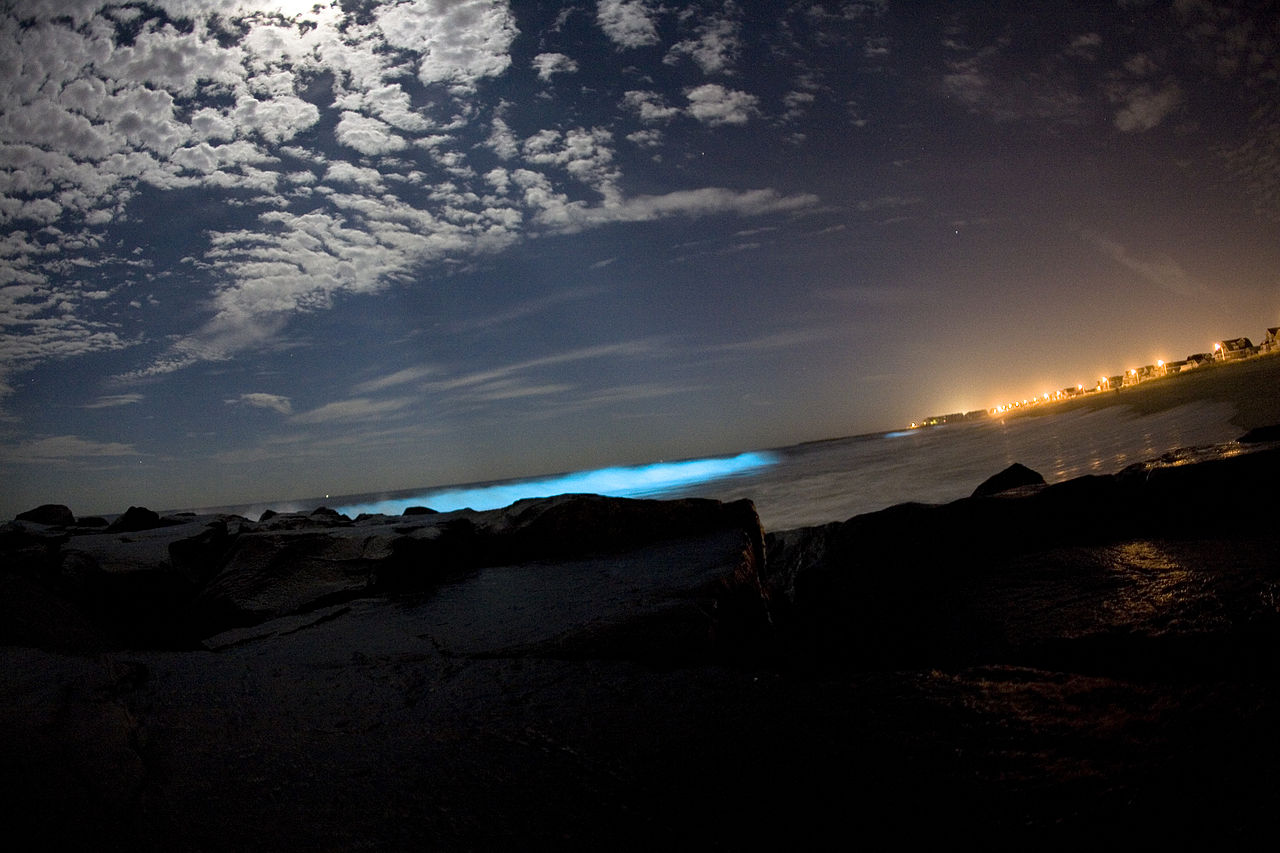 Bioluminescence is a form of chemiluminescence where light energy is released by a chemical reaction. Fireflies, anglerfish, and other organisms produce the light-emitting pigment luciferin and the enzyme luciferase (ref) (The above picture is from New Jersey in the United States)

The location specified in the article was at the southern end of Juhu beach.

We reached Juhu beach on 17th night at around 10:30 pm and joined an already growing crowd at the jetty. 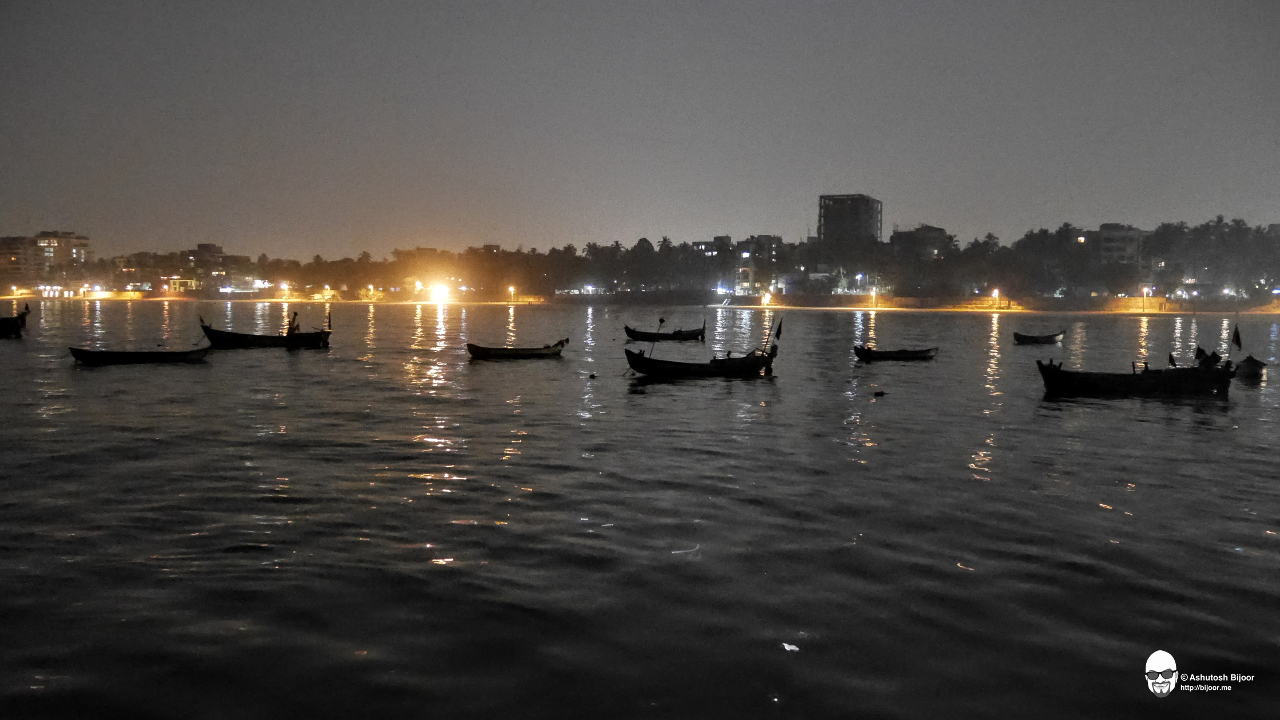 There were students who were studying bioluminescence, photographers with tripods and long zoom lenses, and other casual observers like us, all gathered at the jetty to view this rare phenomenon. 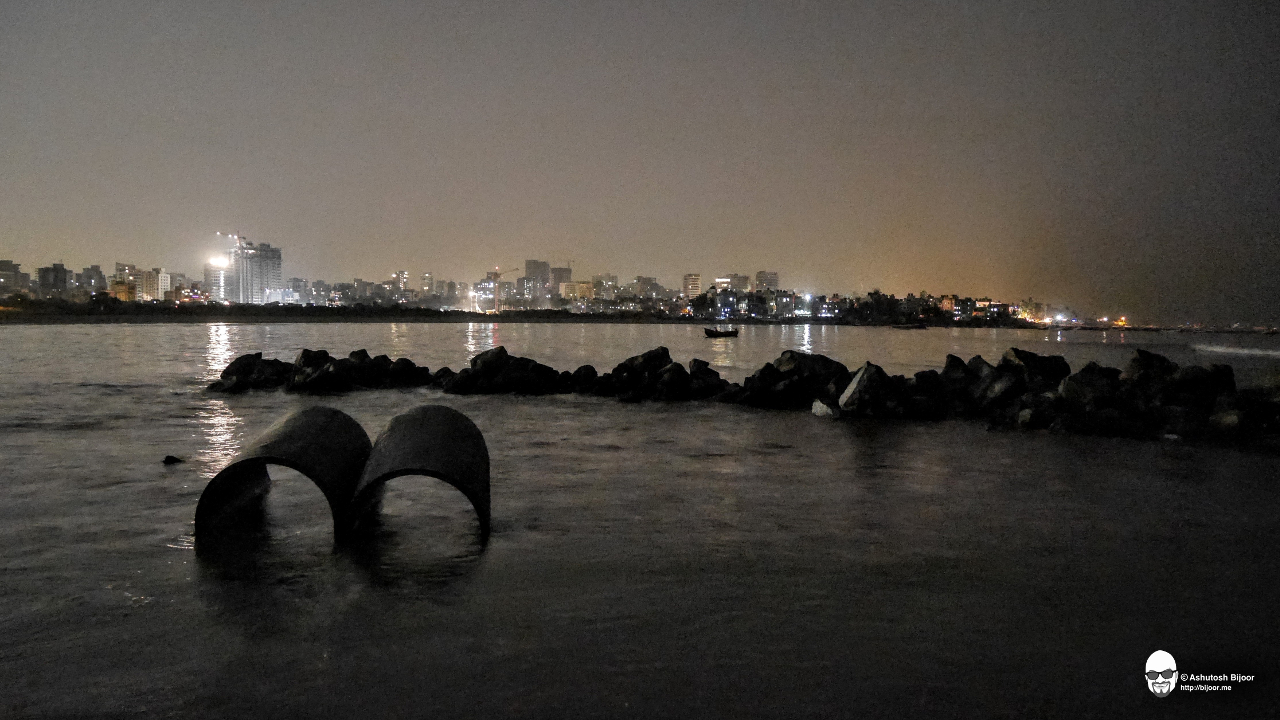 The tide started coming in rapidly, and we kept peering into the darkness to see if we could spot any bioluminescence anywhere. 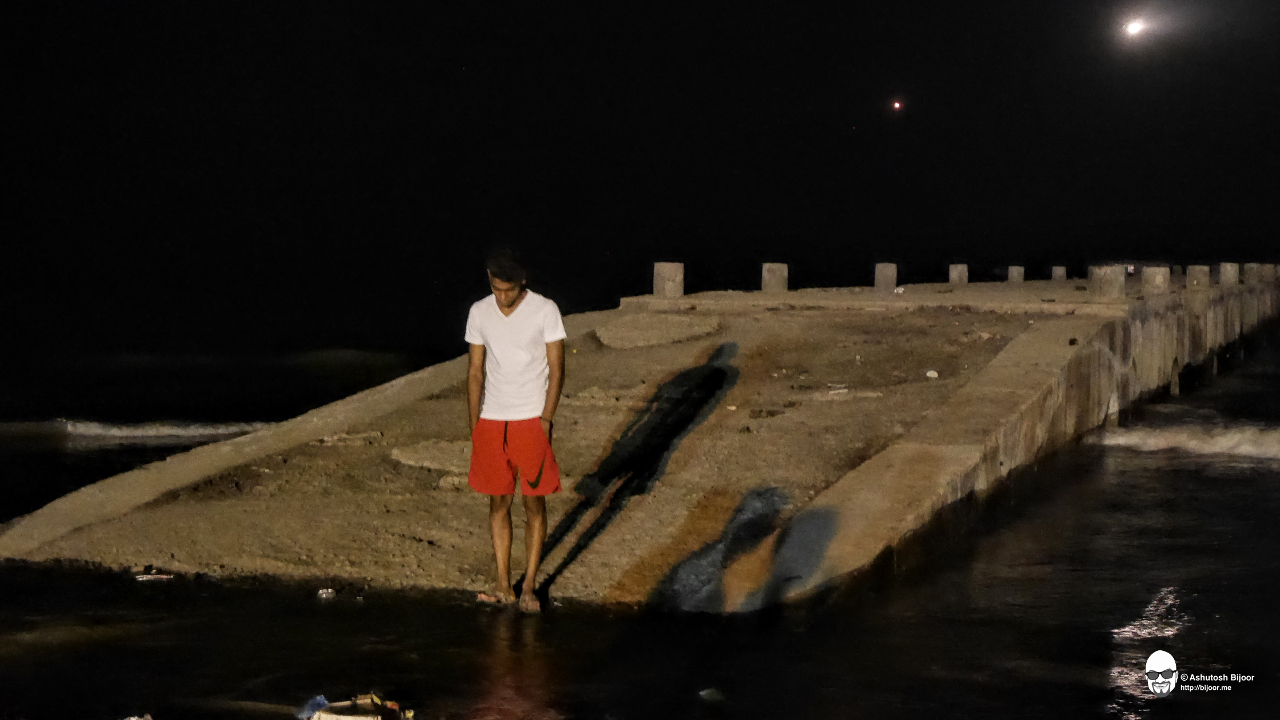 It was past midnight, and we did not realize that we had brought in our 26th wedding anniversary on the beach! Rohan was showing unusual patience and insisted that we wait to see the "blue thing" 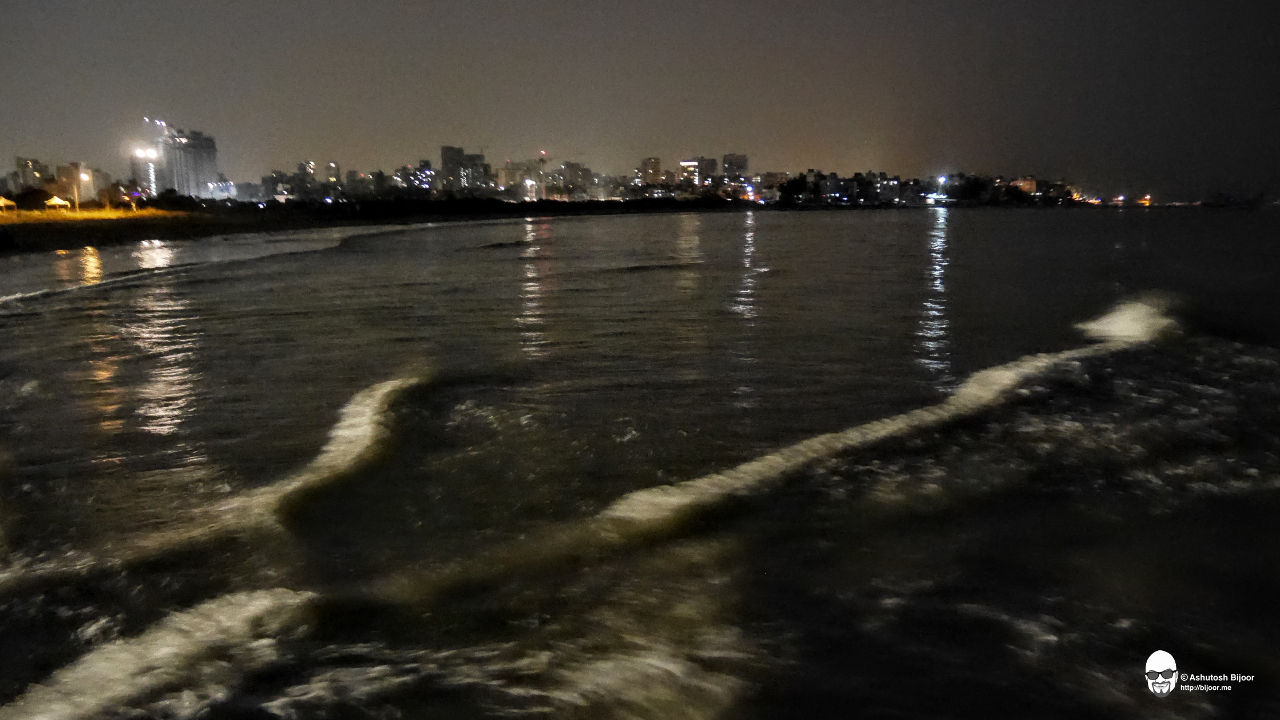 At around 1:30 am people started noticing some bioluminescence in spots. But the entrance to the jetty was already being submerged, and we quickly went back to the beach 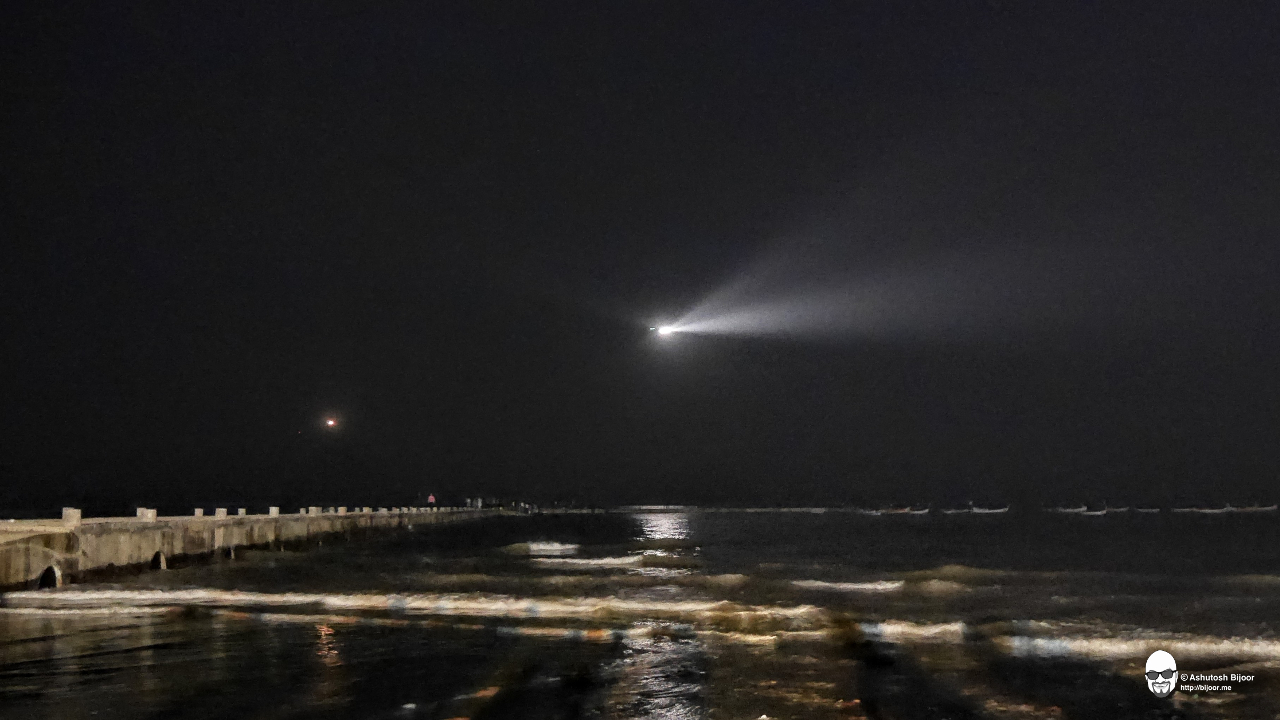 We were directly under the line of descent for the runway at Santacruz airport, and saw several airplanes as they descended 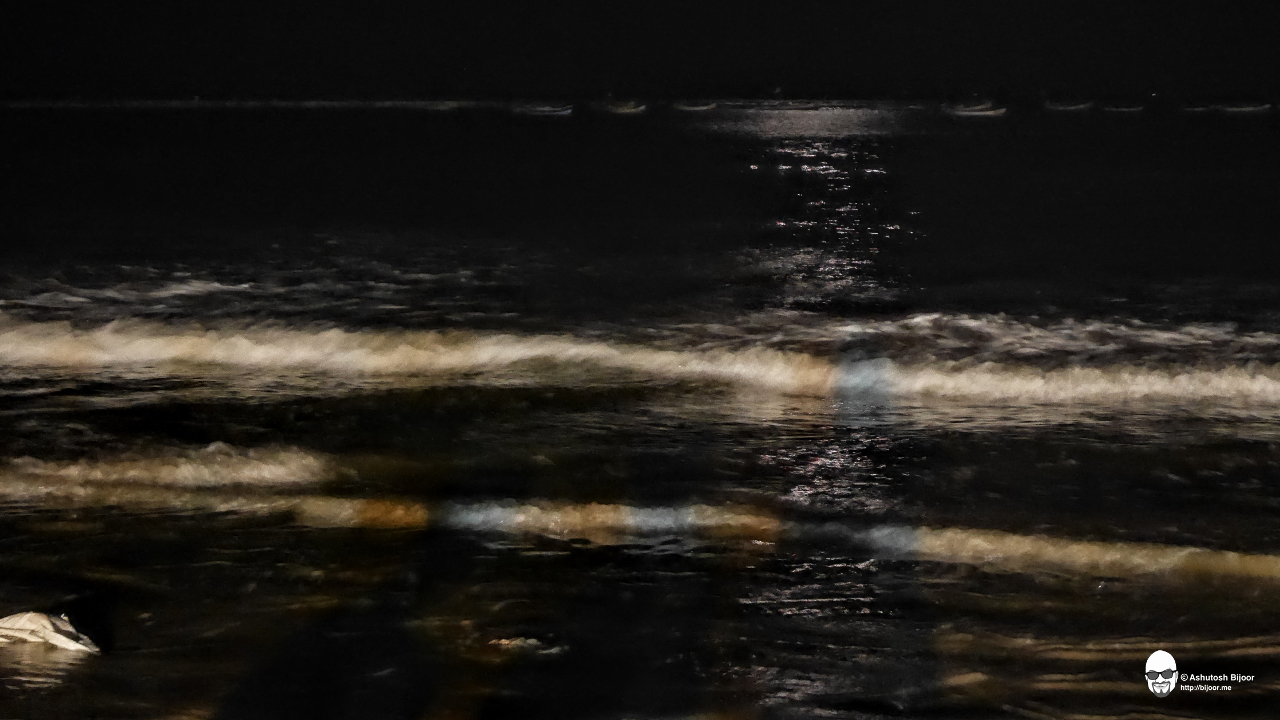 Then suddenly almost magically, we started seeing sparkling in the water! We desperately tried to distinguish whether we were seeing bioluminescence or whether it was the illumination of the beach.

Dr. Parvish Pandya, vice-principal and assistant professor of Zoology at Bhavan’s College in Mumbai made these comments:

It can't be predicted as to WHEN the bioluminescent organisms can be sighted off Mumbai coasts, SINCE we have NO RECORDS about the periodicity and co-relation with moon days, nutrients and other chemical constituents of the water, etc. Some sources indicate that the activity occurs every fortnight for a couple of days close to (before & after) new moon (Amavasya) and Full moon (Purnima). But we want data and scientific evidence.

We need to maintain records of this activity and ONLY if we do this for a couple of years, then we may be able to draw some hypothesis (NOT CONCLUSION). Best time is in the night when HIGH TIDE is from 9 pm till 5 am because that's the time the tide waves are coming closer towards the shore and it's dark. So for example if the high tide is at 10 pm, i would ideally reach the spot by 8 pm and start looking around.
[Spot map - https://goo.gl/maps/ij8MePrHBH72 ]

I have thus asked my student Sayli Bhalekar to let me know, when see sees it next, as she stays in a house, just overlooking the action. Nilesh Mane and Abir Jain are my-ex-students who observed on 15-16 January 2016, after which i went to the same location for FOUR continuous nights, only to be disappointed

We were not totally disappointed. We had spent a pleasant few hours on the beach on a jetty whose existence we did not know before today, and we had unwittingly brought in our 26th wedding anniversary on the beach!