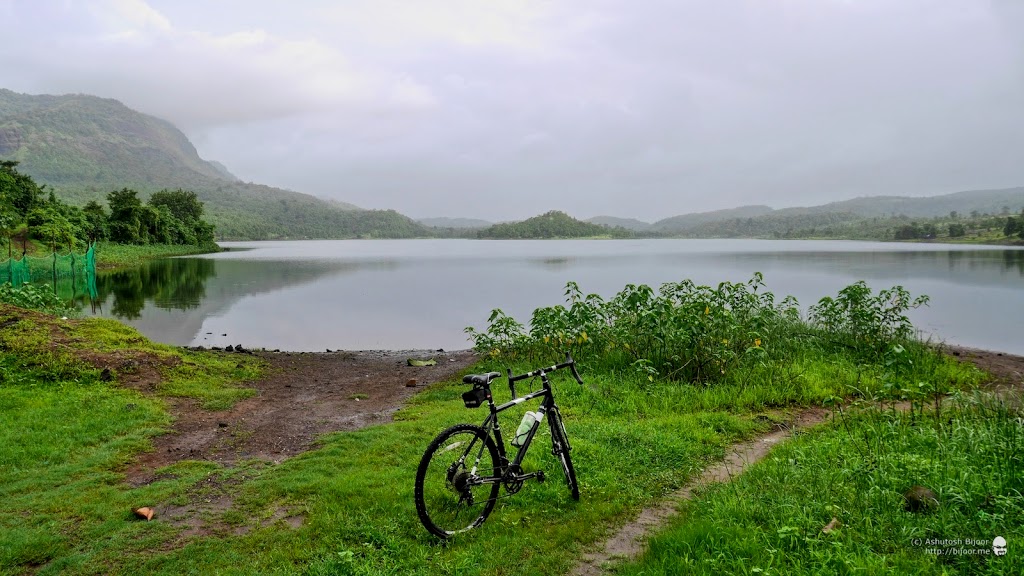 Cycling to Vajreshwari and Usgaon Lake

Cycling to Vajreshwari by itself is also a great route. The best way to do this is to do a circuit. One way to reach Vajreshwari is by cycling along the Eastern Express Highway to the Bhiwandi Wada road up to Umbarpada junction and take a left towards Vajreshwari. From Vajreshwari, the road continues ahead till Shirsad junction where it joins the Western Express Highway that leads back to Mumbai. The route map above shows this circuit. We first rode along this route in April 2012. 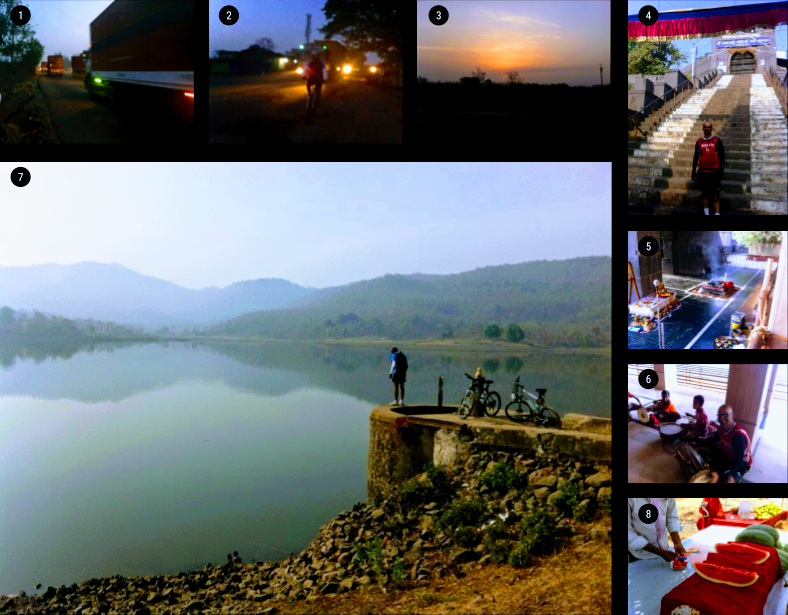 The total distance of this ride is about 125 km. (1) We started early in the morning hoping to avoid the traffic but encountered scores of trucks that were already on the Bhiwandi Wada highway. (2) Riding with the truck headlights shining into your eyes was a bit tricky, and our cycle lights were no match for them! (3) As dawn broke, it got easier to ride and (4) we reached Vajreshwari temple without any untoward incident. (5) As it was still early, the temple was not crowded with visitors and (6) we reached just in time for the morning prayers or aarti when I got a chance to play the dholak (drums) with the kids. (7) We then visited the nearby Usgaon lake formed by the dam. (8) On the way back it was quite hot - being mid-April - and we had to stop several times for drink breaks and a tasty watermelon! 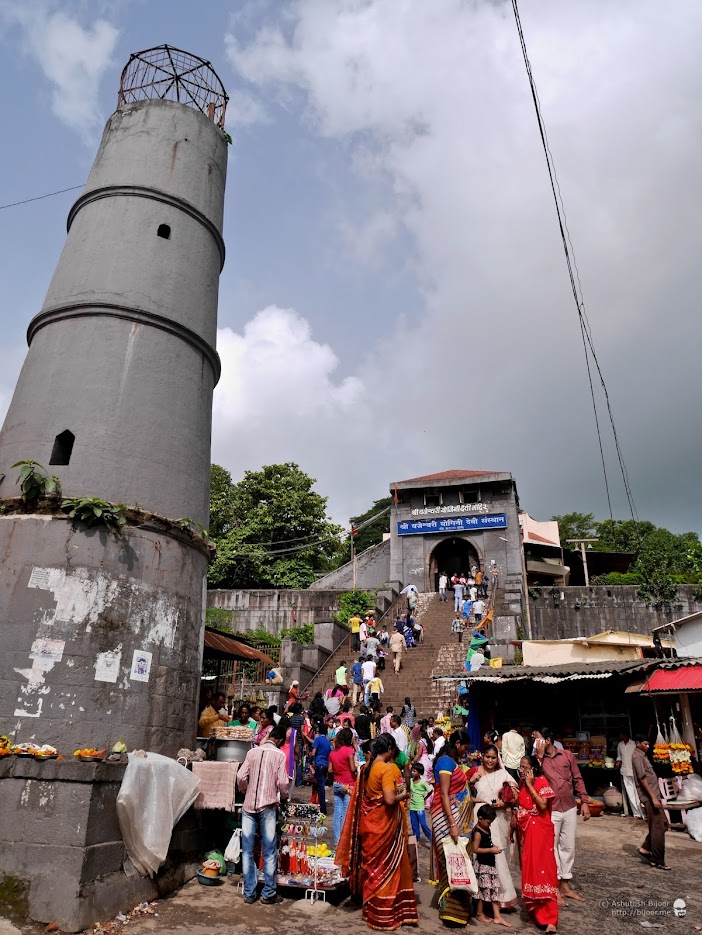 The temple is a beautifully decorated structure at the top of a flight of steps on a spur of the Gumtara range. Legend is that in 1739, Chimaji Appa - the younger brother and military commander of Peshwa Baji Rao I - had set up camp in the Vadvali region on his way to attack the Portuguese-held Bassein Fort of Vasai. The Fort was unconquerable even after a three-year war. Chimaji Appa prayed to goddess Vajreshwari that if he could conquer the fort and defeat the Portuguese, he would build a temple to her. According to legend, the goddess Vajreshwari appeared in his dream and told him how to conquer the fort. On 16 May, the fort fell and the defeat of the Portuguese in Vasai was complete. To celebrate his victory and to fulfill the vow taken in front of the goddess Vajreshwari, Chimnaji Appa ordered the new Subhedar (governor), Shankar Keshav Phadke, to build the Vajreshwari temple. (ref) 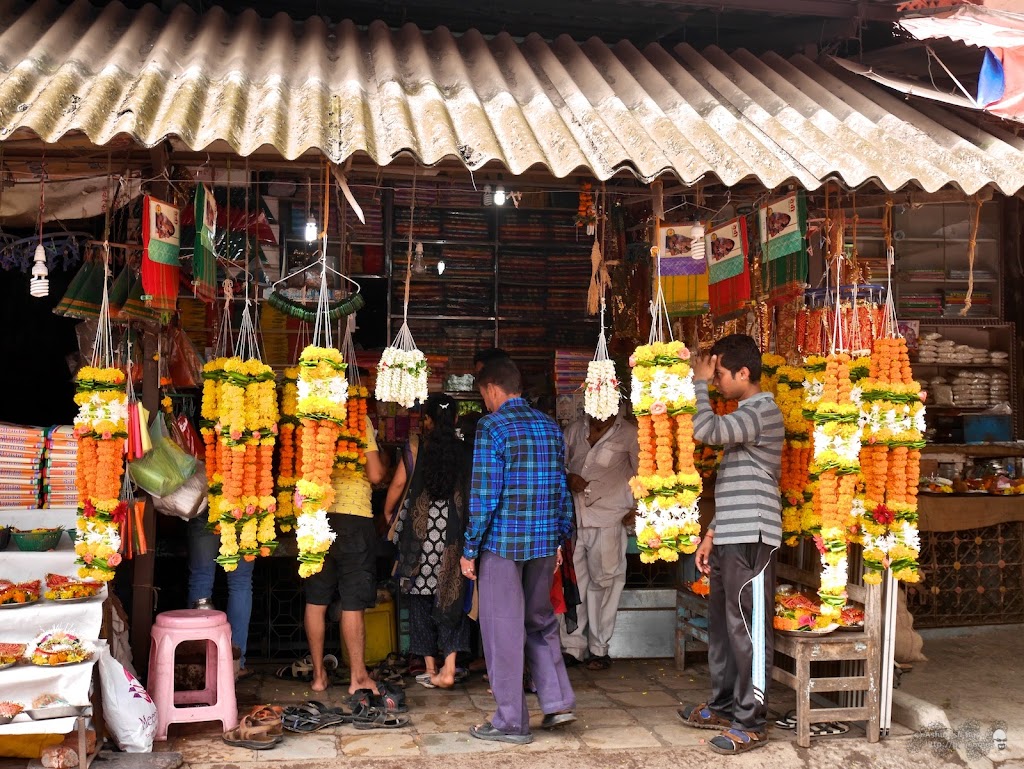 The village comes alive at major festivals. A huge fair in honour of Goddess Vajreshwari is held on Amavasya (new moon day) in the Hindu month of Chaitra. The fair commences on the 14th day of the fortnight of the waning moon of the month with the ceremonial worship of the Goddess. On Amavasya at night, lamps are worshipped. On the next day, the first day of the Hindu month Vaisakha, a ceremonial procession with a Palkhi (palanquin) carrying an image of the goddess, is taken out. (ref)

A slightly longer route to Vajreshwari is via Lohape Lake. This is a relatively less known lake at the base of the Mandakini Mountain. The road to the lake is via the Dakiwali village. When you come to Umbarpada junction on the Bhiwandi-Wada highway, you continue ahead till the Dakiwali *phata* (junction) and take the left towards Dakiwali. 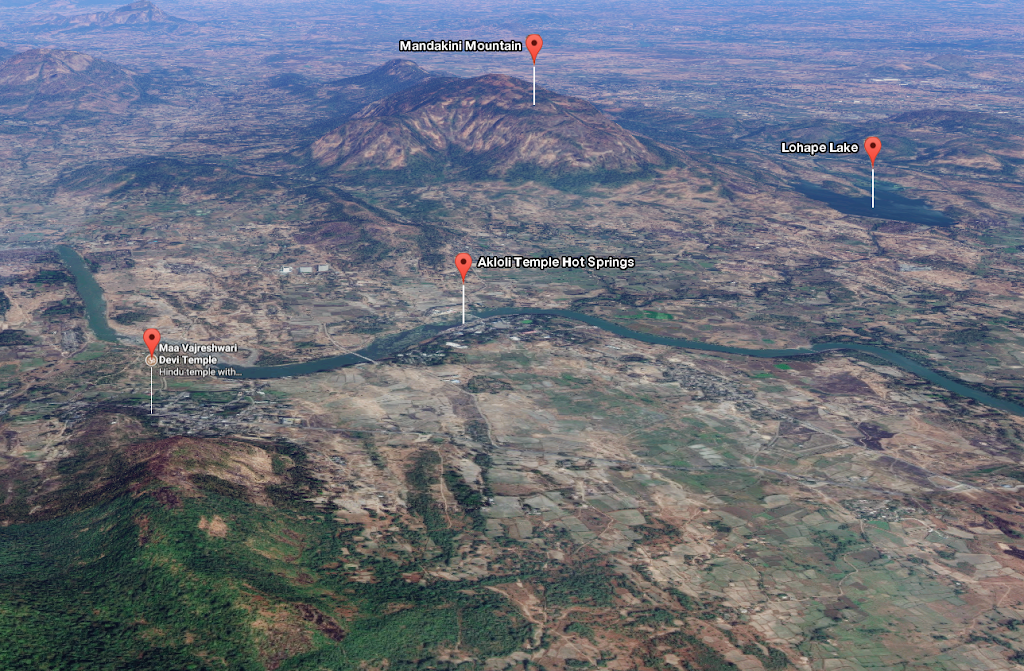 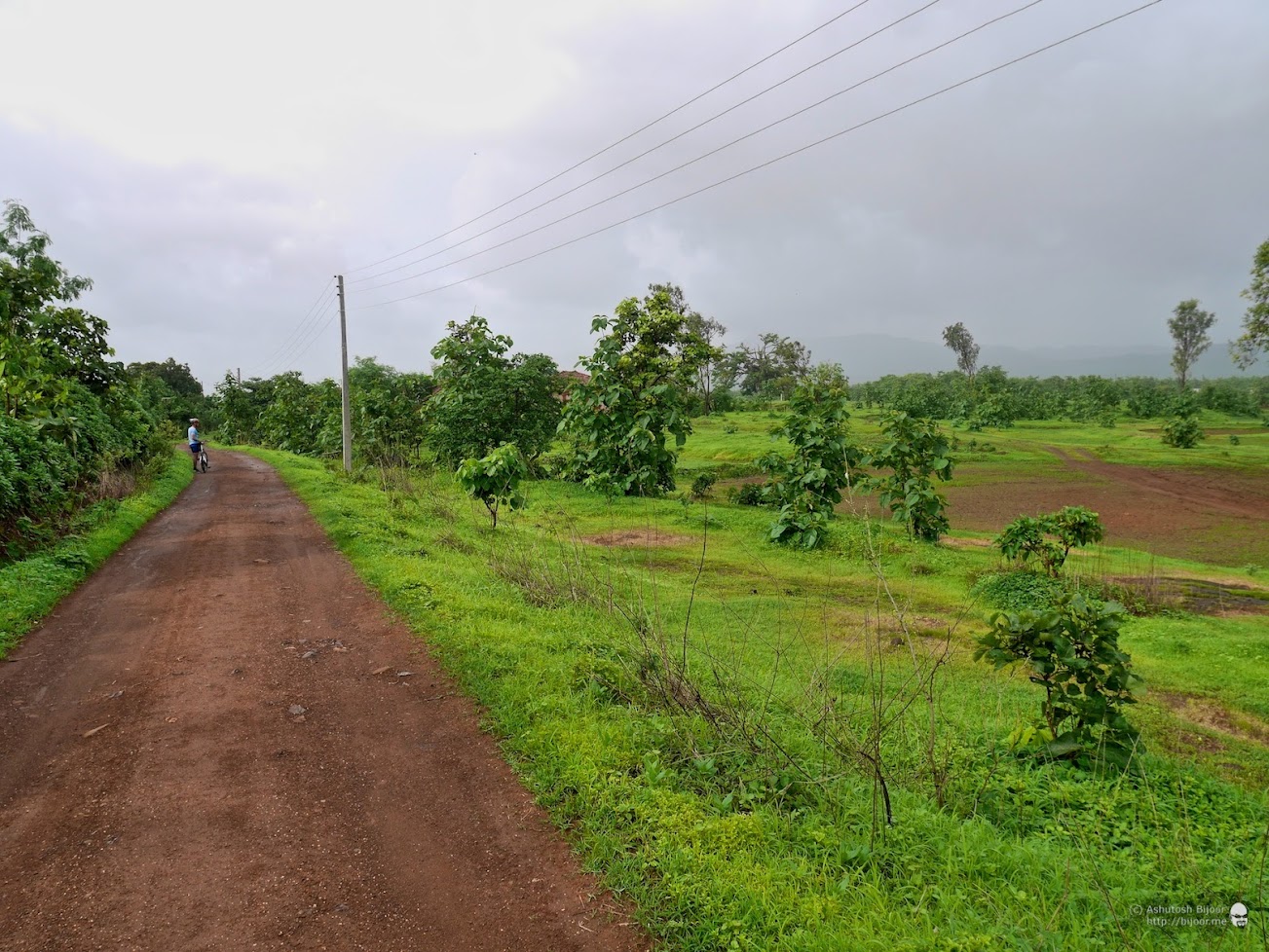 At Dakiwali village, a mud road leads north to reach Lohape lake. This road provides a great opportunity to enjoy a mountain or hybrid bike. I was riding my trusty cyclocross, while my friend and co-rider Sameer rode a hybrid. The surface was not too bad but in patches had potholes filled with muddy water in the monsoon.

When we reached the lake, there was not a soul in sight - just the water of the lake shimmering in the cool breeze. 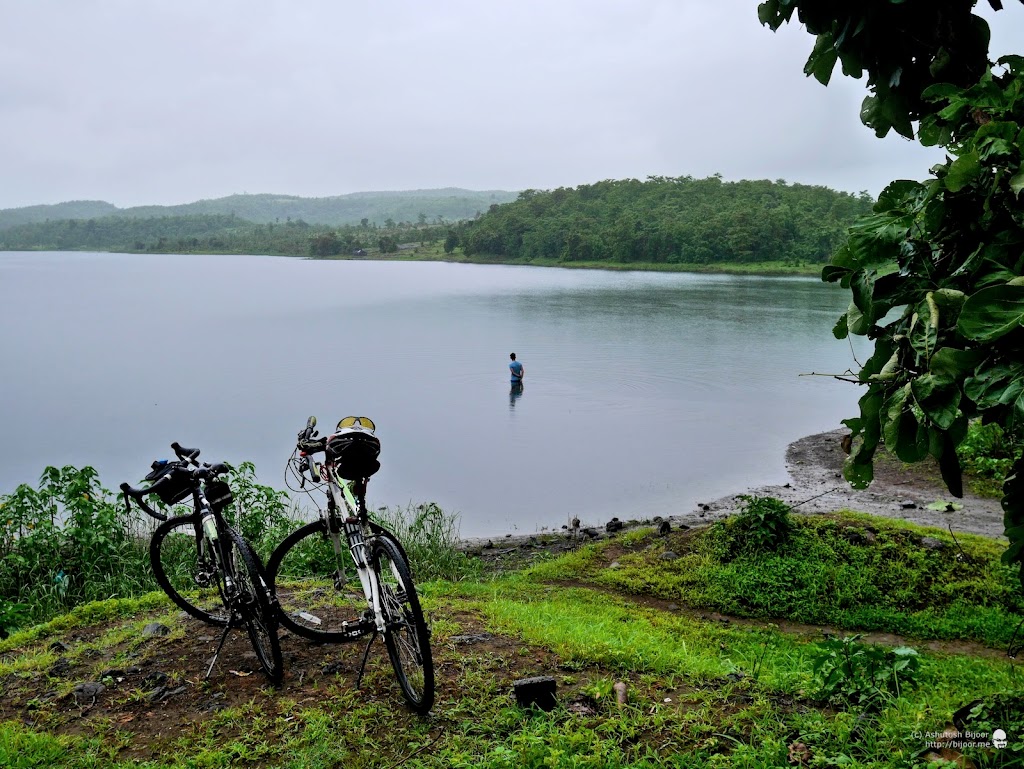 We parked our bikes on the shore and went to check out the water. The water was very clean and the bank gradually sloped down into the water. 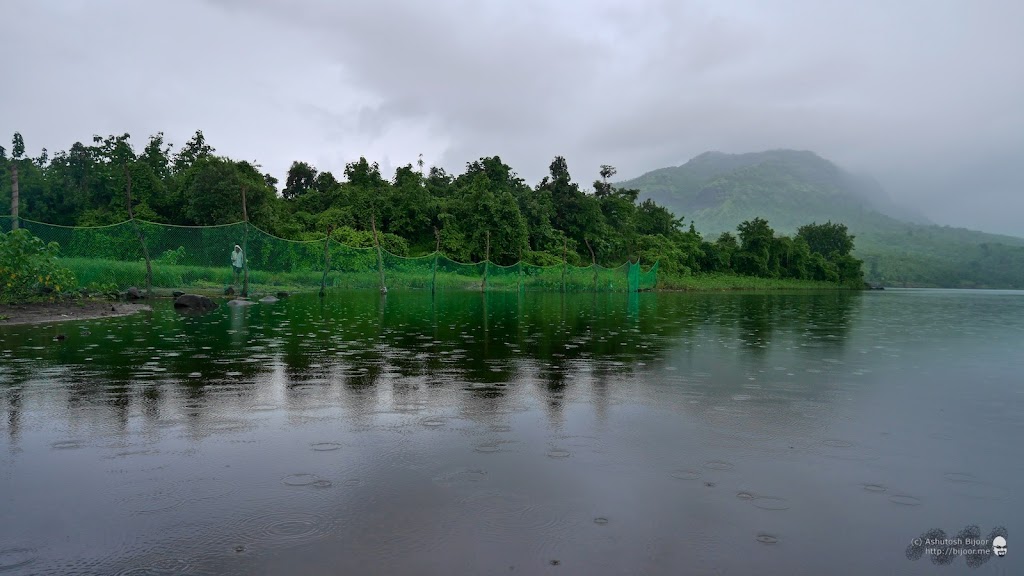 Then the clouds descended upon us and the Mandakini Mountain behind was all but engulfed in them. It started drizzling, and we noticed we had company. A villager who had put up nets to catch fish came to inspect his harvest. 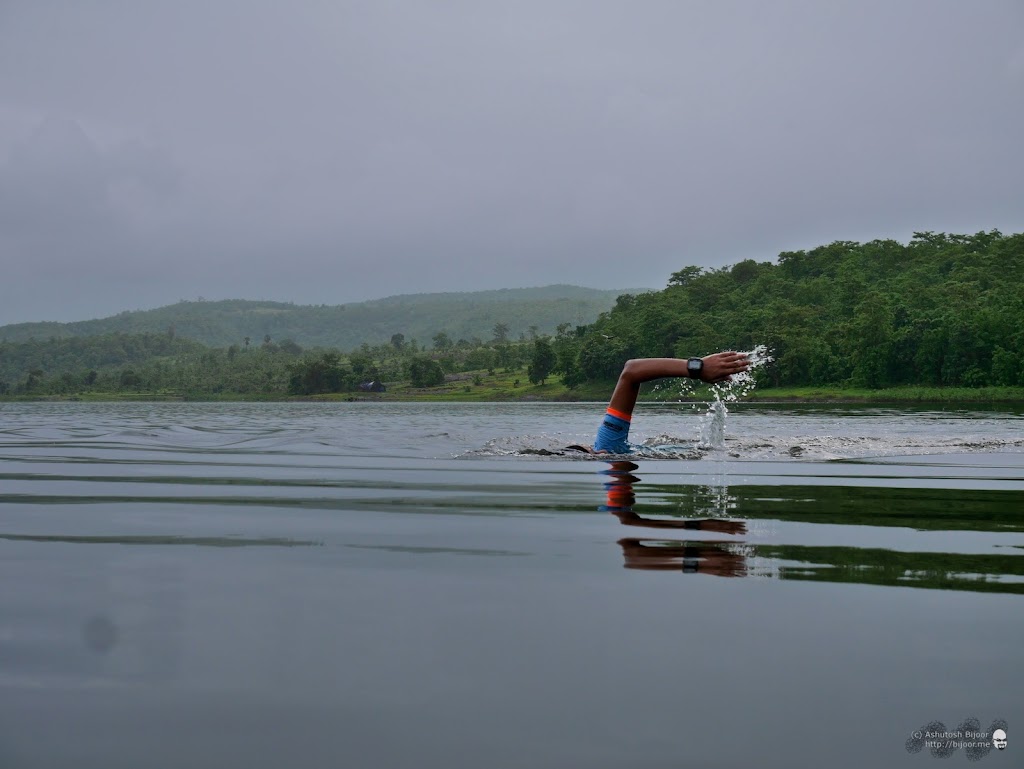 We gave into the temptation to swim in the water and swam towards the shore on our right and back. This was truly one of the best open water swims we have ever had! It is a perfect location to practice for a triathlon. 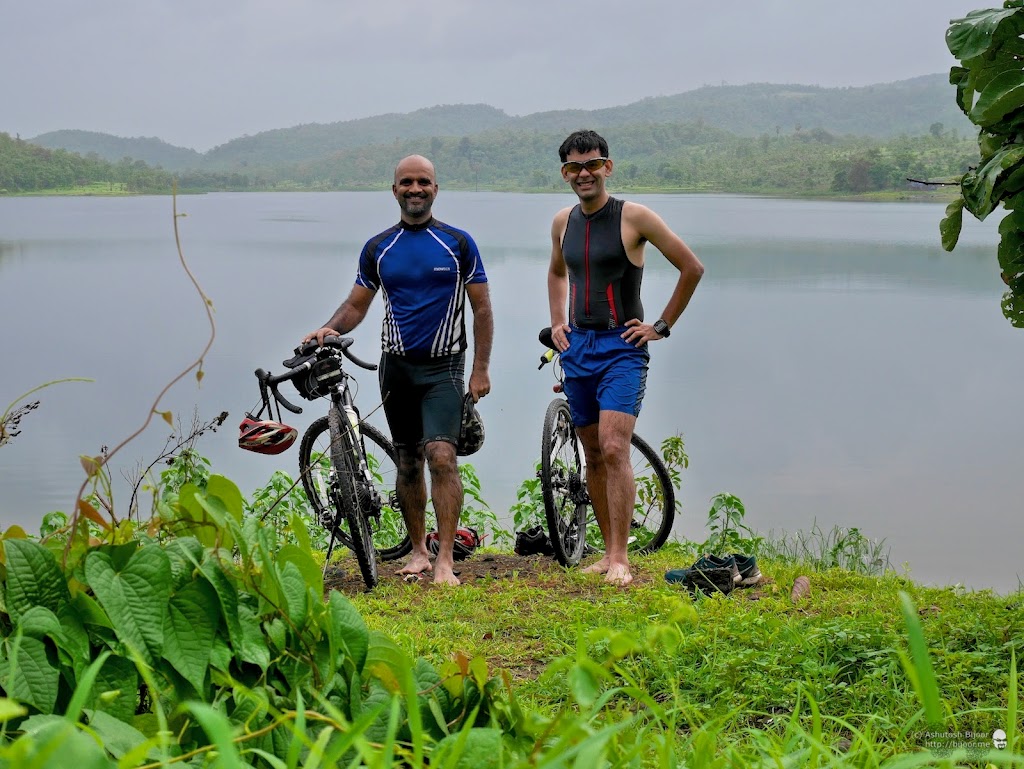 Feeling refreshed after that swim, we got back to our bikes and prepared for the journey ahead towards Vajreshwari. 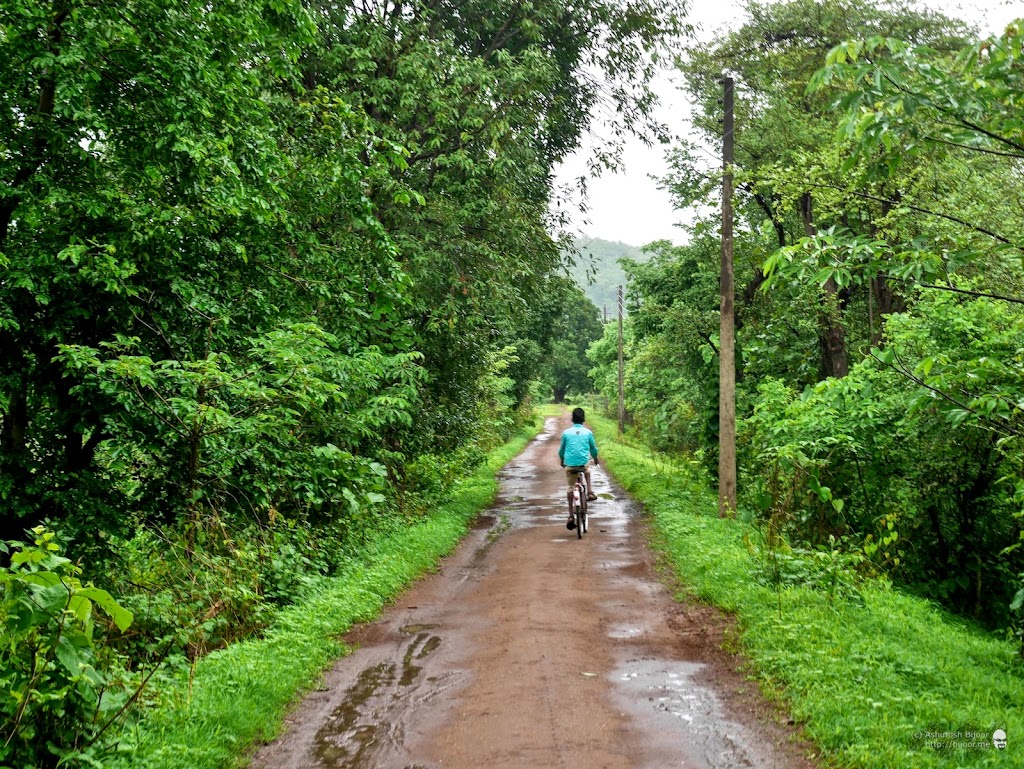 On the way, we met a kid on a bicycle who was returning home from some errands. We cycled with him till Akloli. We had a nice breakfast at Vajreshwari and then proceeded back to Mumbai via Shirsad and the Western Express Highway. 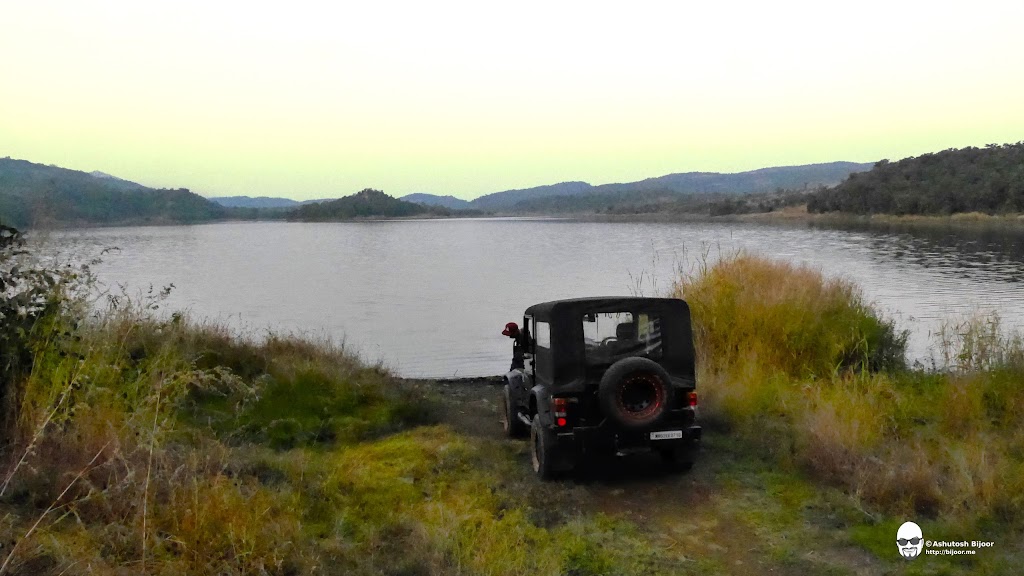 I returned to Lohape lake later with my jeep one evening to enjoy the sunset with my son accompanying me.