While on a business visit to New Jersey, I spent a weekend cycling along the beautiful Cooper river that winds its way from Haddonfield in New Jersey to its confluence with the Delaware river at Camden. 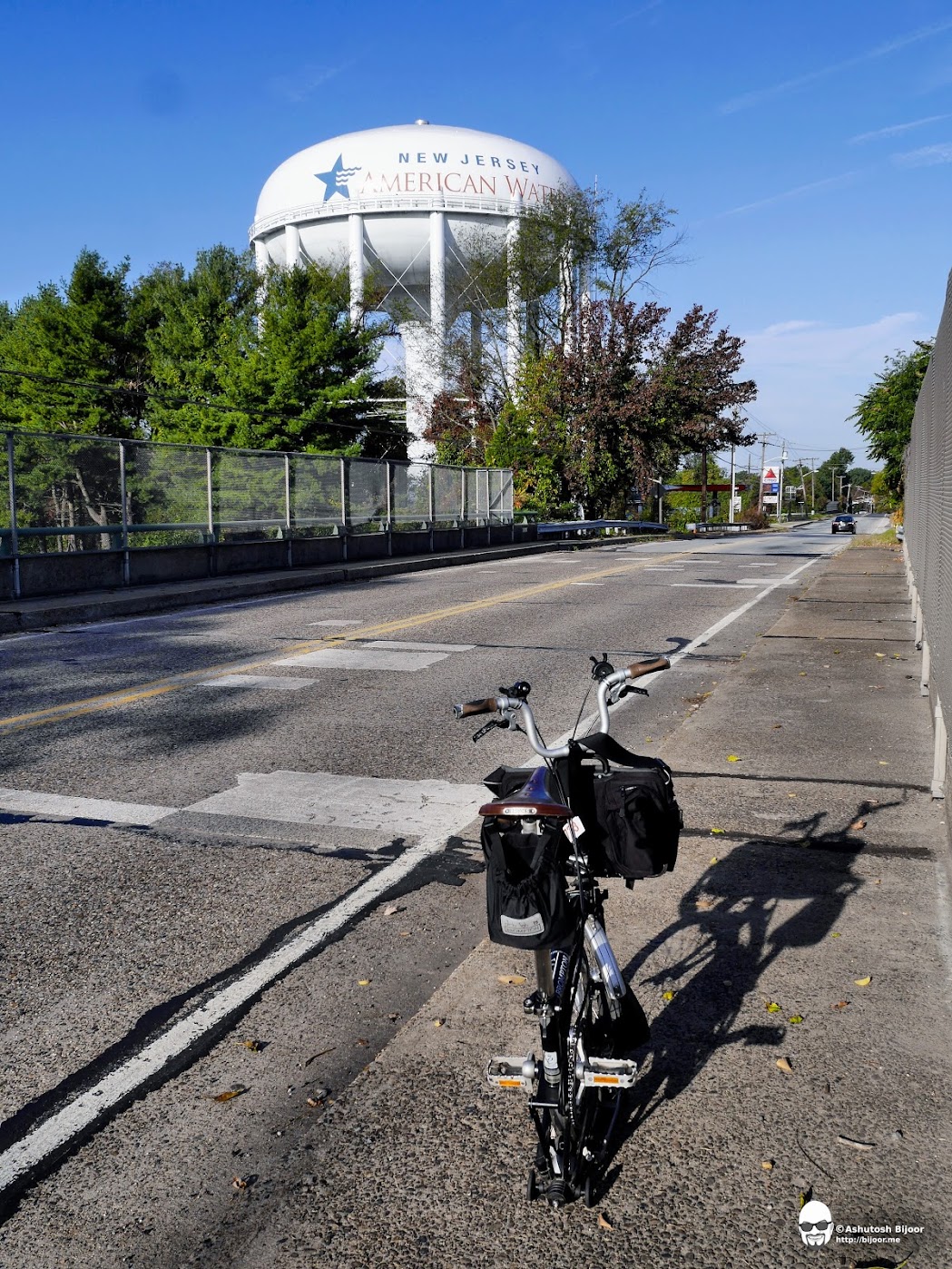 My hotel was in Cherry Hill, locked down between three highways - 295 on the west, the New Jersey Turnpike on the east and 70 to its south. For pedestrians or cyclists, the only proper way to get out of there is to go a mile north to cross over 295. But I cheated and walked with my cycle on to 70 and crossed it at the pedestrian signal south towards Haddonfield. 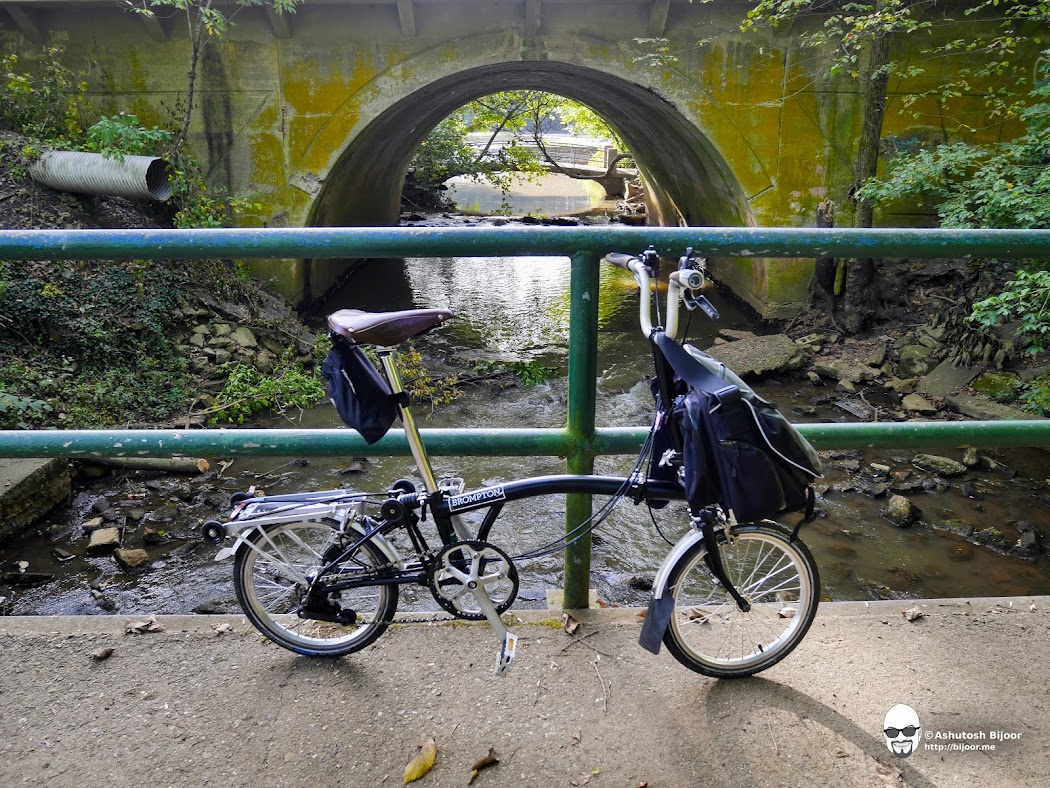 I rode along Park Boulevard around the Challenge Grove Park and then joined the trail at Kings Highway just after Wallworth Lake. The tunnel in this picture is under Kings Highway and one can see the lake through it.

The trail runs along the river and through the woods and at some places, there is a board walk that provides a smoother surface to the trail with cute wooden bridges over streams. The river and the park provide an ideal environment for wild life, and I could hear a constant chirping and singing of birds all along the way. I also spotted a White Heron and several ducks swimming in the river. 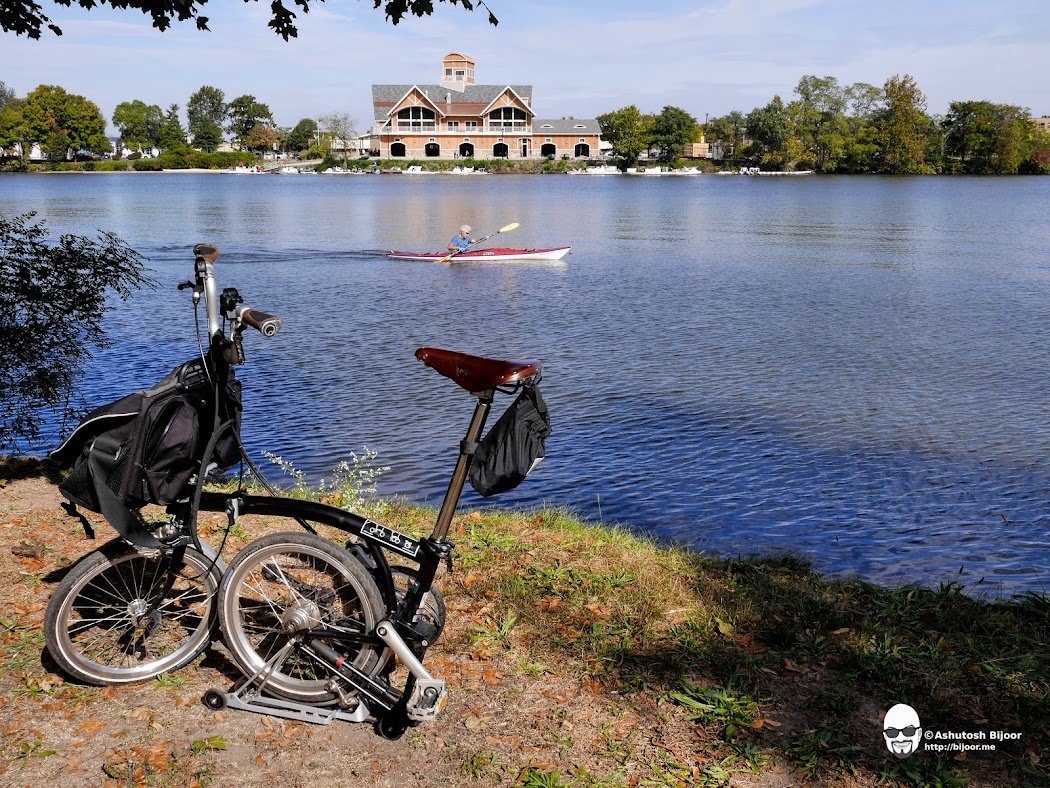 Near Collingswood, the river broadens to form the Cooper River Lake with the Cooper River Park on both banks. The trail on the south bank provides a beautiful view of the Camden County Boathouse on the opposite bank, and I saw several rowing boats doing the rounds along the stretch. 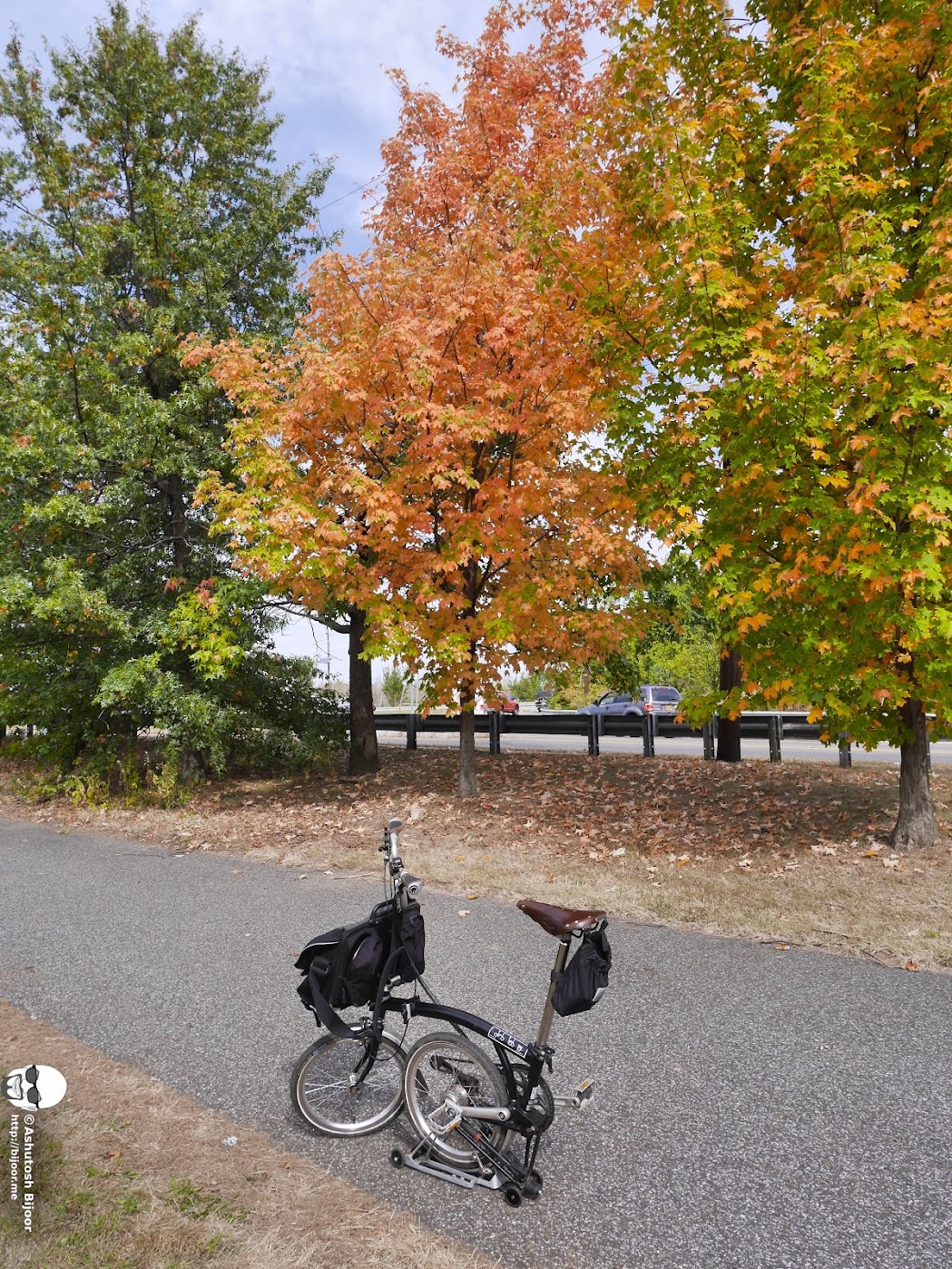 Further north, I crossed over to Farnham park in Camden. I could see some Maple trees beginning to show a hint of the fall colors. I'm hoping that by next weekend, I will get more of this!

The Benjamin Franklin Bridge – originally named the Delaware River Bridge, and now informally called the Ben Franklin Bridge – is a suspension bridge across the Delaware River connecting Camden to Philadelphia. Owned and operated by the Delaware River Port Authority, it is one of four primary vehicular bridges between Philadelphia and southern New Jersey, along with the Betsy Ross, Walt Whitman, and Tacony-Palmyra bridges. Pedestrian walkways run along both sides of the bridge, elevated over and separated from the vehicular lanes; of these, only one is open at a time ([ref](https://en.wikipedia.org/wiki/Benjamin_Franklin_Bridge)). I was lucky that this time the walkway to the east was open, and the views of the river from this side are spectacular! 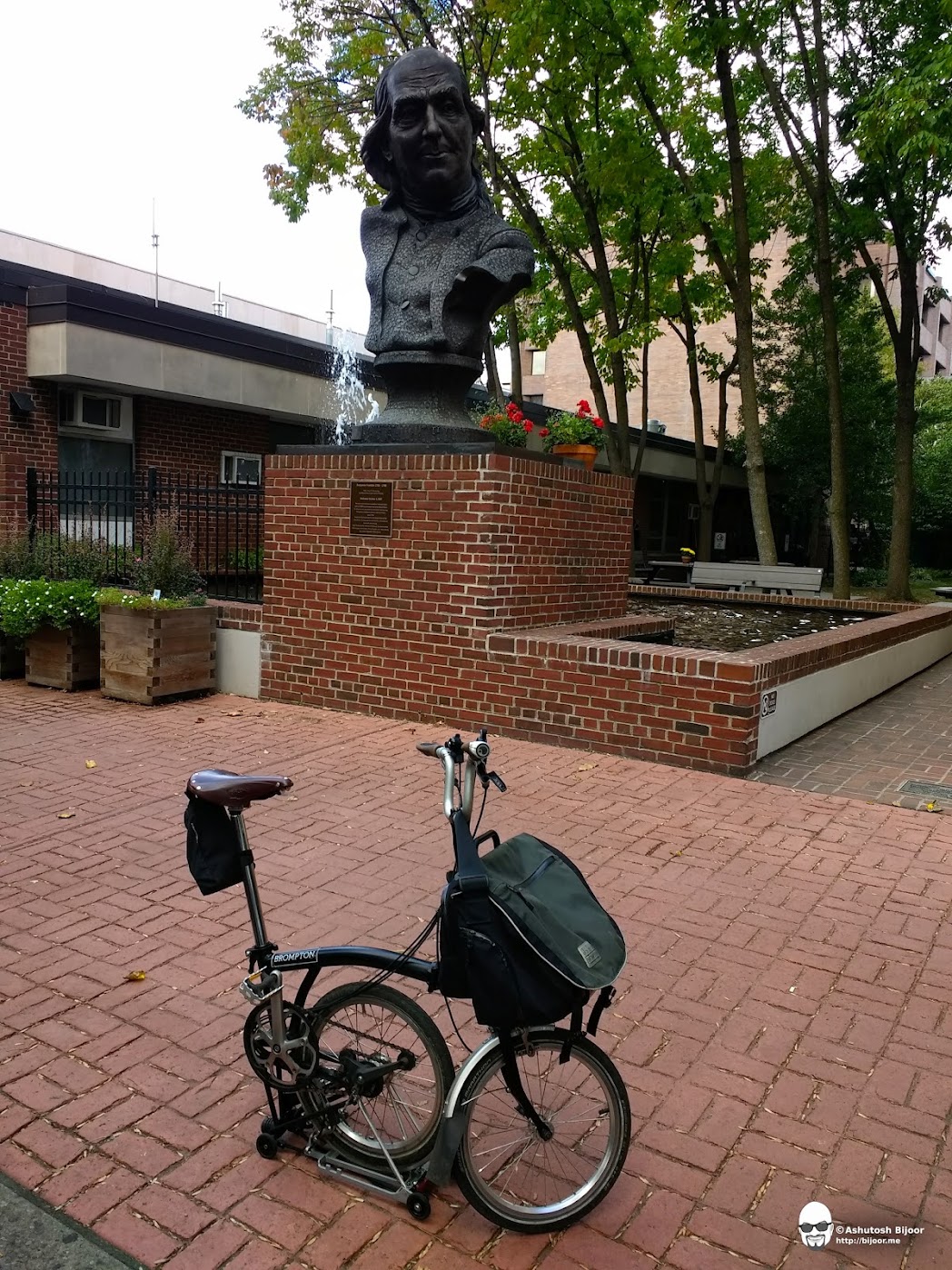 Quite appropriately, I cycled by the nine foot tall bust of Benjamin Franklin in Girard Fountain Park at 4th and Arch Streets. The sculptor James Peniston wanted to involve the surrounding community, and visited 24 nearby elementary schools to talk to students about Franklin. He asked the pupils to bring old keys from home — and they responded by filling buckets with more than 1,000. Casts of the keys were incorporated into the surface of the piece (ref) 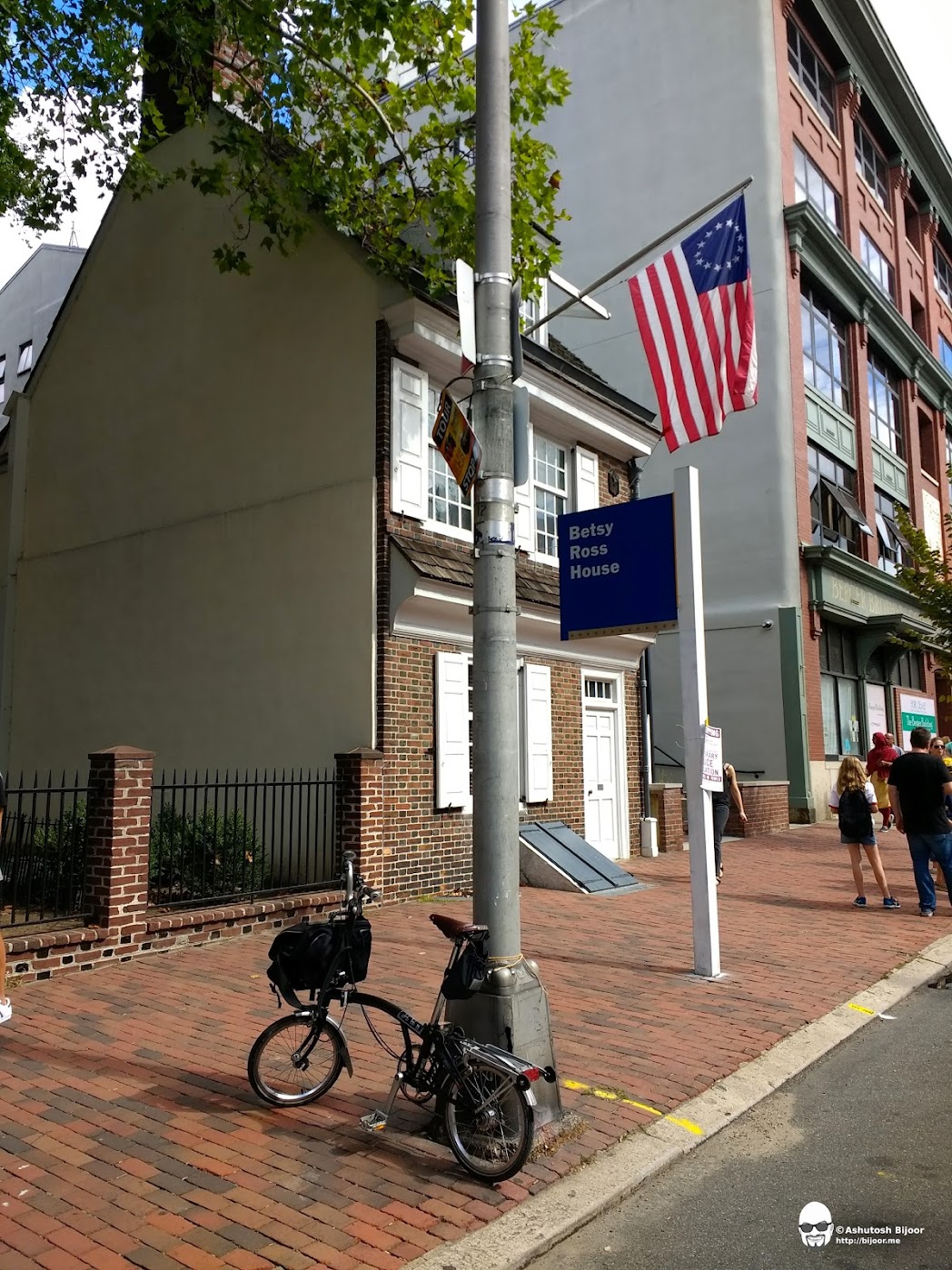 A block to the east of Girard Fountain Park is another landmark - the Betsy Ross House, purported to be the site where the seamstress and flag-maker Betsy Ross (1752-1836) lived when she sewed the first American Flag (ref). 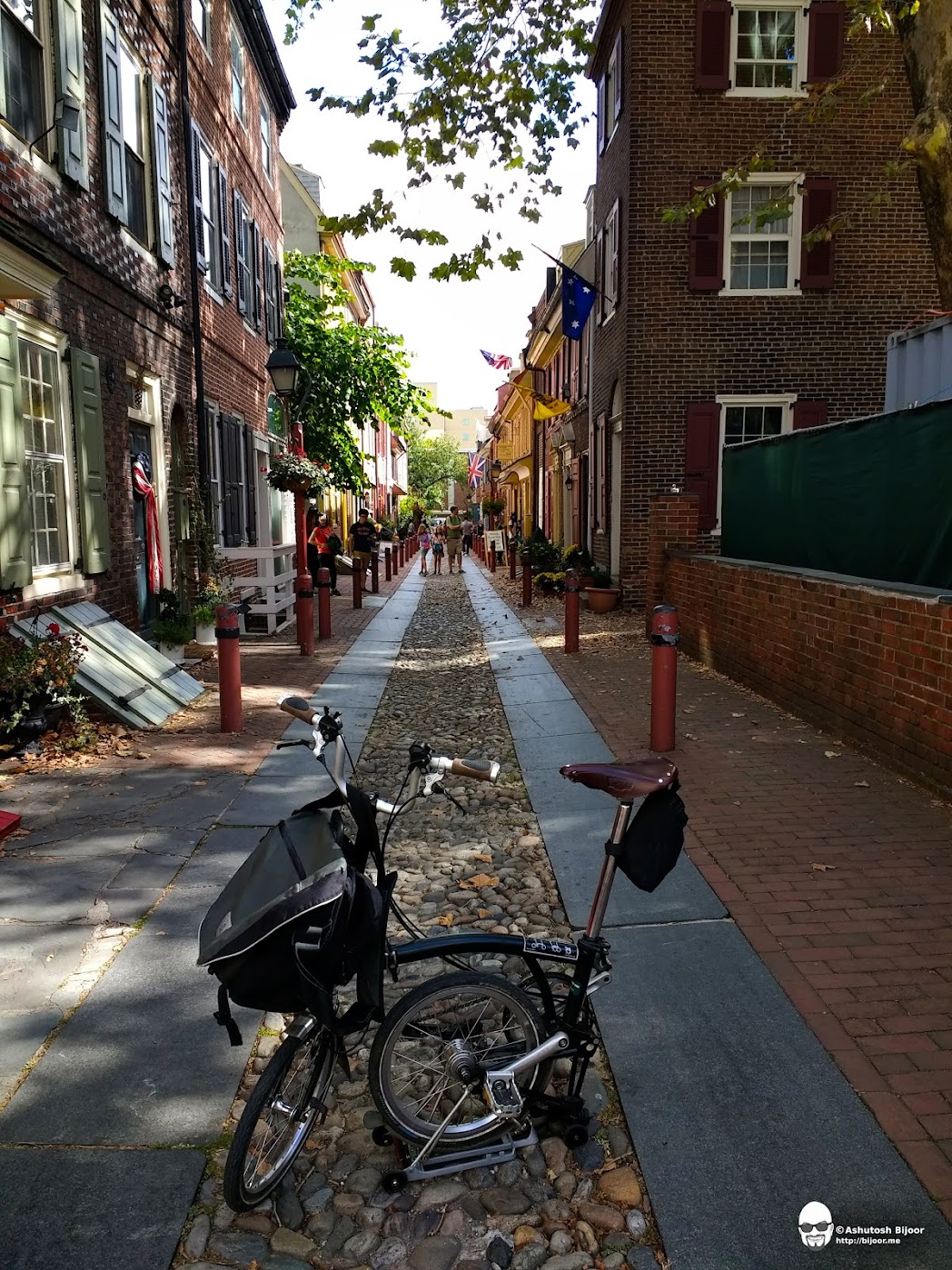 The next stop was the charming Elfreth's Alley - the nation's oldest residential street! The alley is named for Jeremiah Elfreth, an 18th-century blacksmith and property owner. Among the alley's residents were tradesmen and their families, including shipwrights, silver and pewter smiths, glassblowers, and furniture builders. In the 1770s, one-third of the households were headed by women (ref) 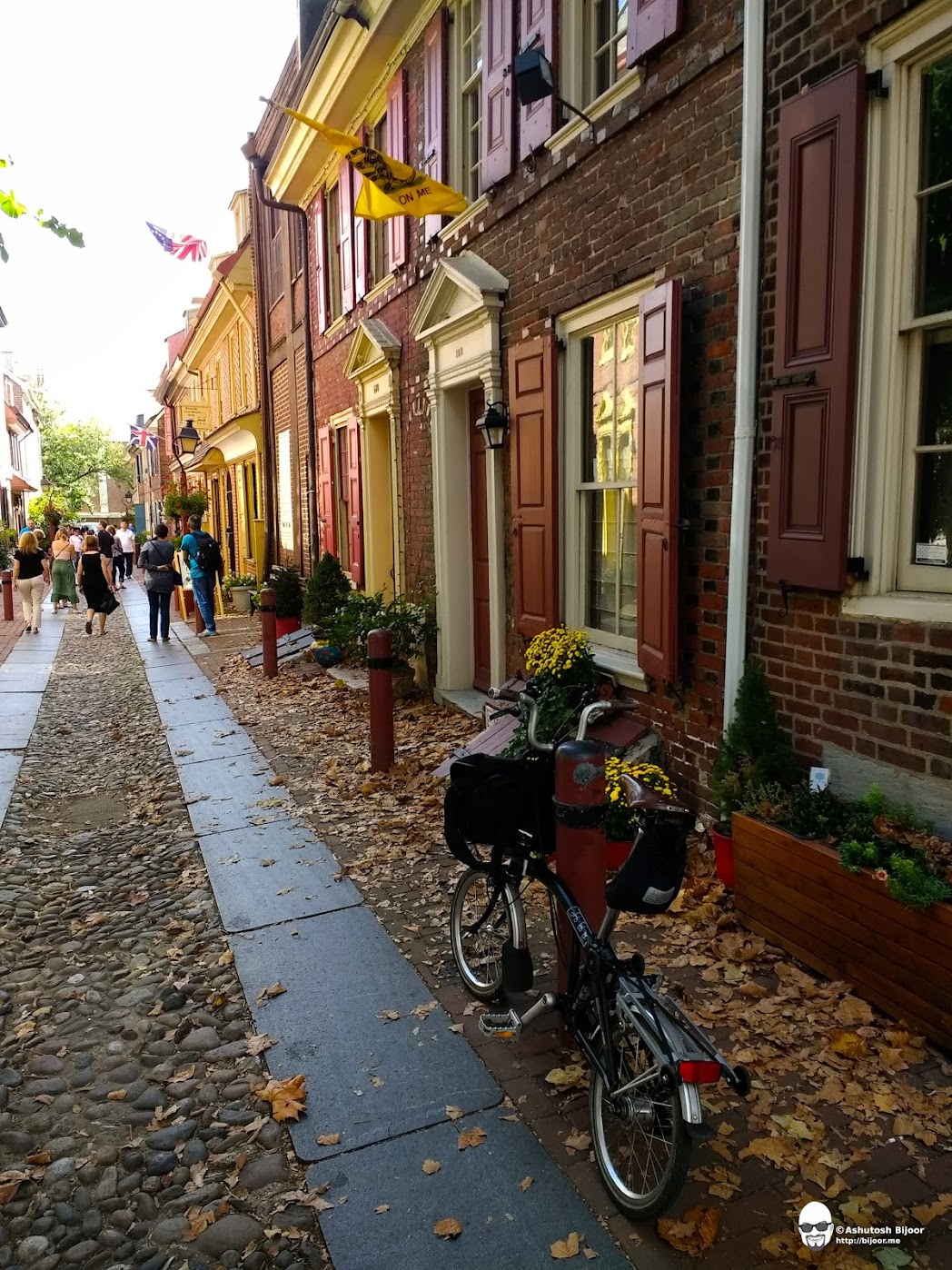 Designated a National Historic Landmark, it is nestled between Second Street and the Delaware River, and has thirty-two Federal and Georgian residences built between 1728 and 1836, that stand as reminders of the early days of Philadelphia (ref) 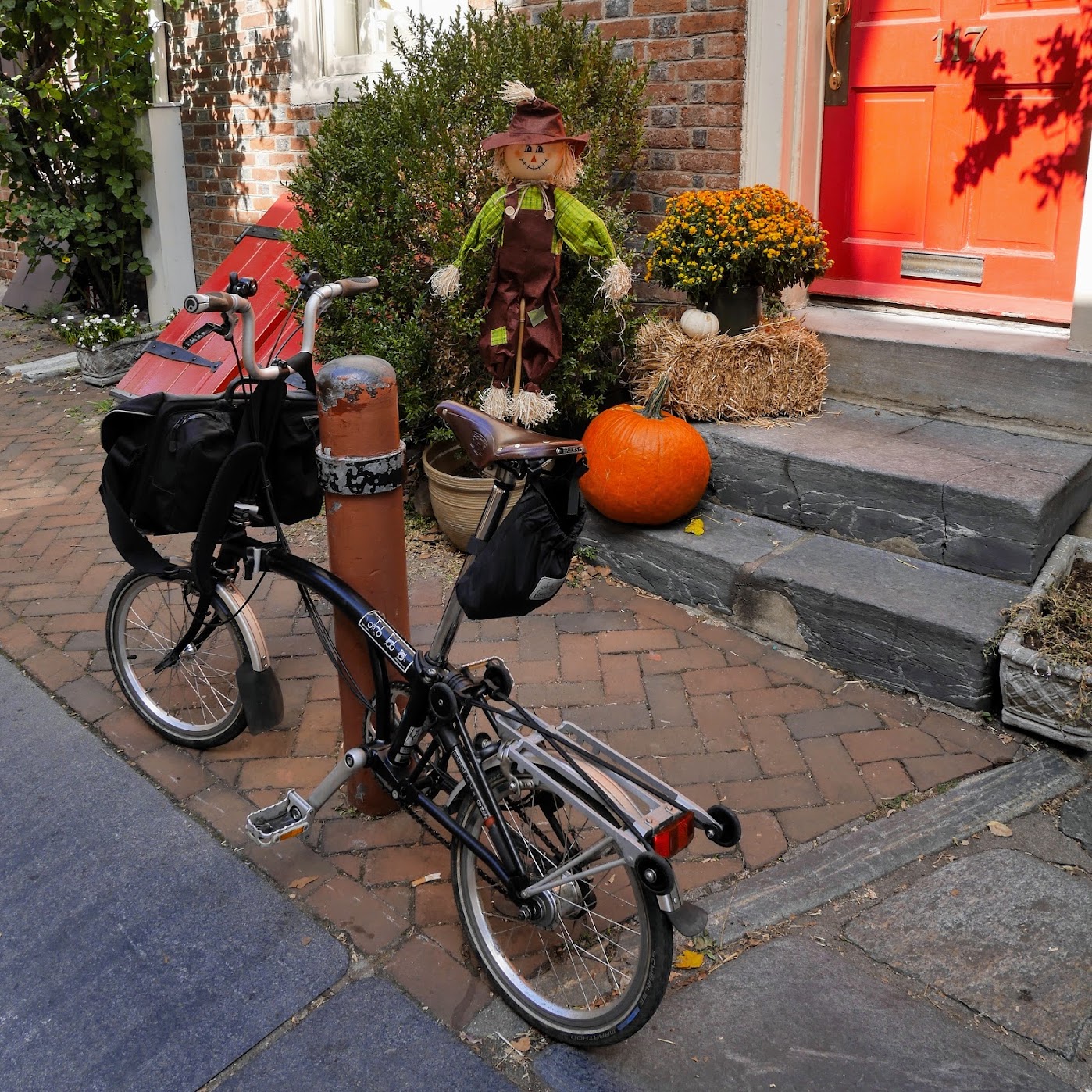 The alley is still a thriving residential community which is home to artists and artisans, educators and entrepreneurs, and everything in-between (ref) 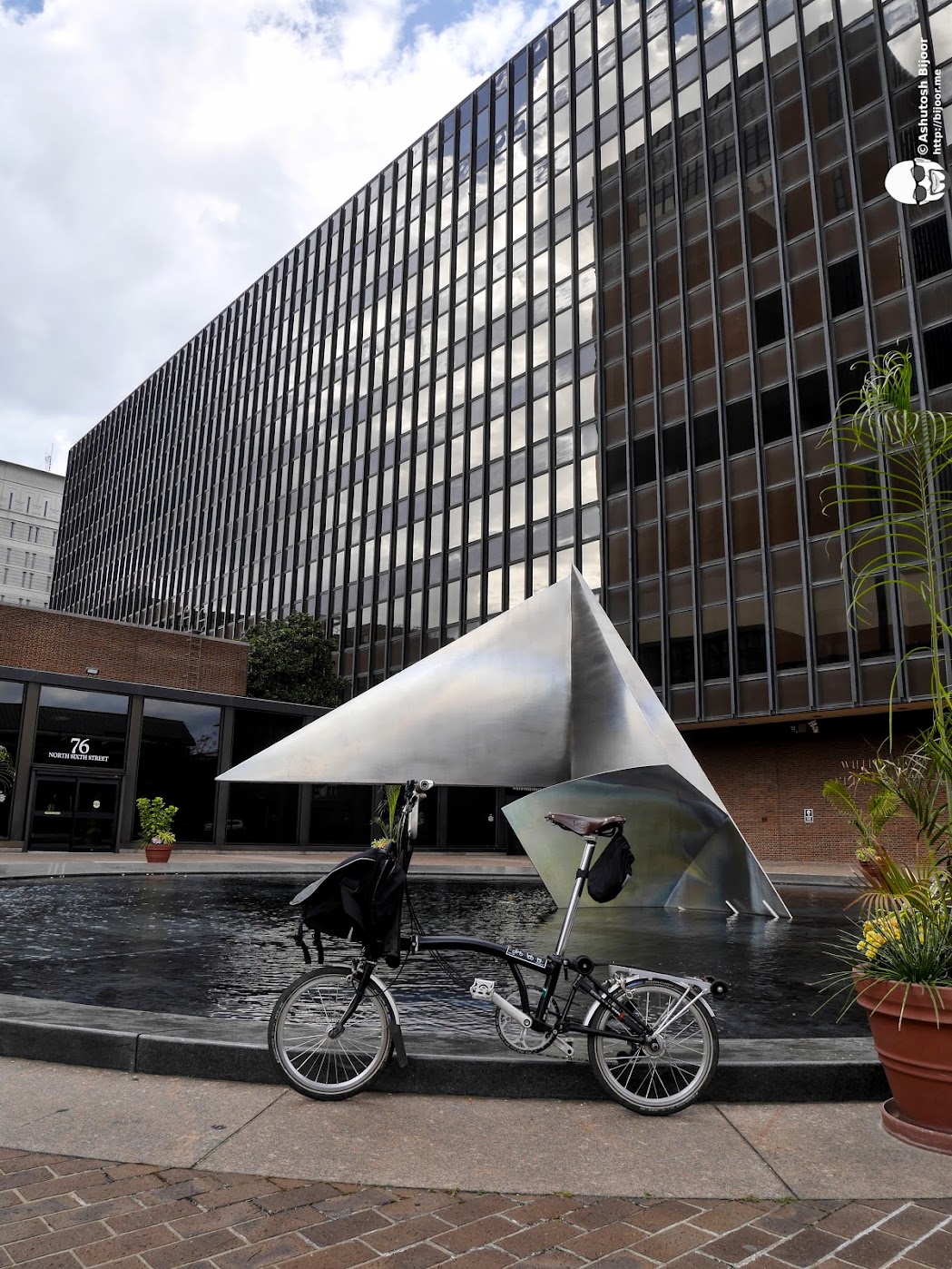 There is a stark contrast of the old world look of Elfreth's Alley with the modern city that surrounds it. This sculpture is surrounded by the FBI, IRS and US Court Appeals for the Third Circuit. These steel and glass buildings somehow do not have the same charm and character as the historic buildings, though. 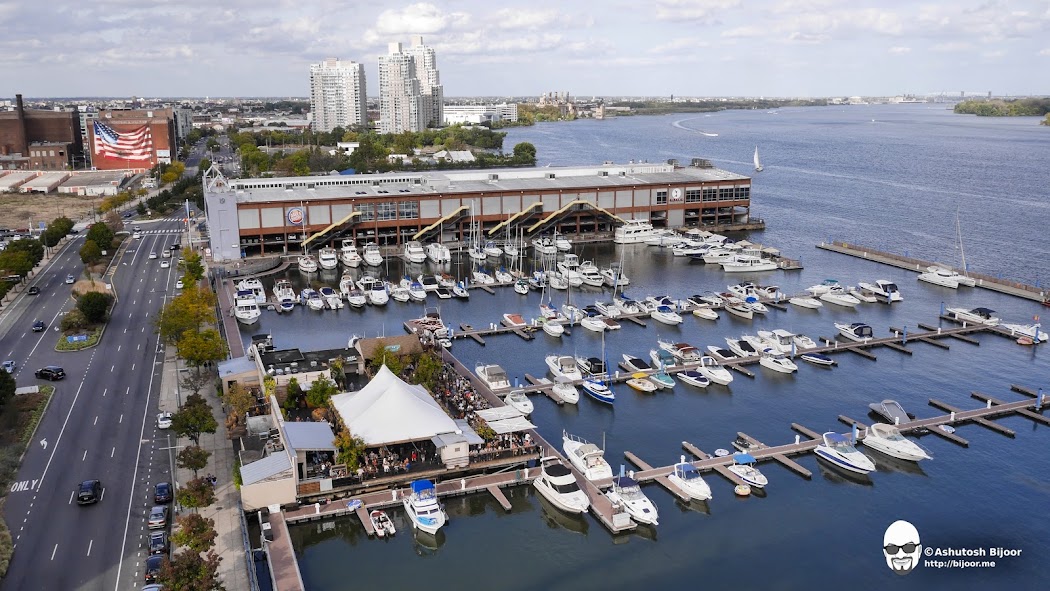 I had lunch at Morgan's Pier that overlooks the river and the bridge. Nothing like a cold beer and freshly made sandwich with an awesome view after a ride! 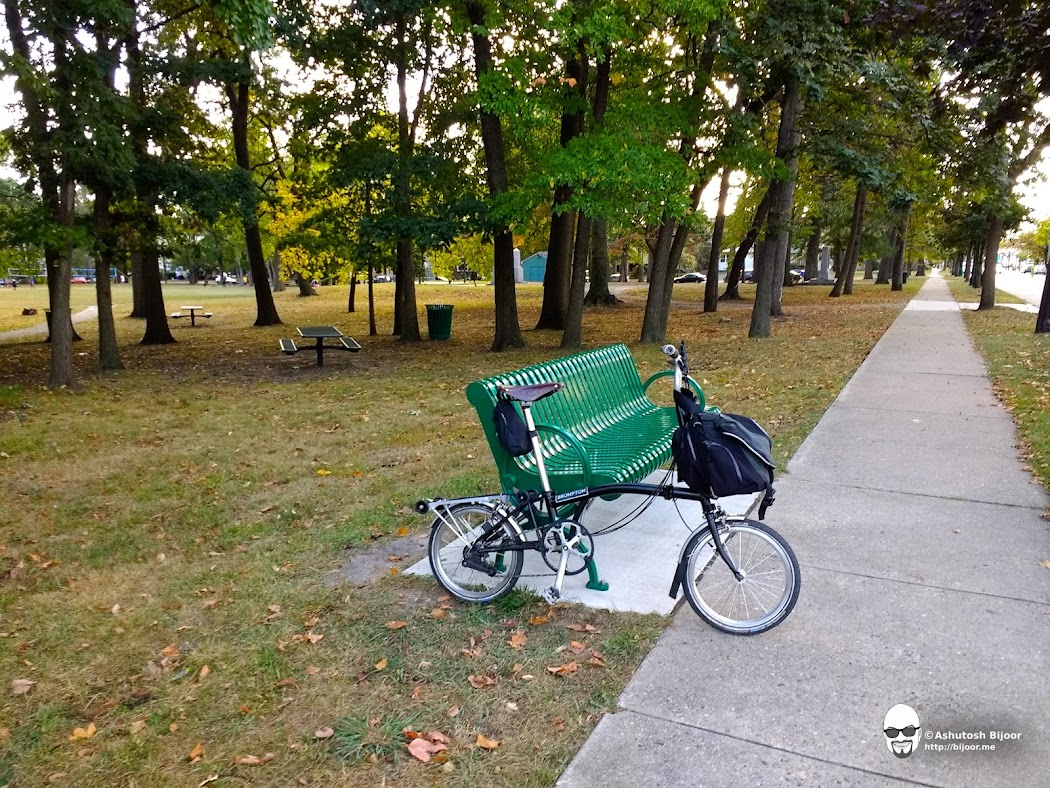 On the ride back to New Jersey, I took a shorter route. With a quick stop at a Starbucks for coffee, I reached the hotel to shower up and was ready for an early dinner of frozen Indian food heated and served by my colleague Saurabh.

Philadelphia still holds a lot more things I have to see and I'm sure I'll be back riding my Brompton again. But this was surely a great way to celebrate my birthday while away from home on work!