Tringalwadi Fort is located on a hill behind the village, at a height of 987 msl. The climb to the fort is an easy 30-45 minute trek that is largely gentle sloped with the last steep section covered by steps cut into the rock.

Video Summary of the Trek

Here is a summary video of the trek: The trek starts at Tringalwadi village. A small mud path leads from the village through rice fields and small streams, along the coast of the reservoir northward till we reach the Jain cave at the foothill of the fort. From there, one starts climbing the hill behind the cave to the left of the cave to reach the ridge, then walk along the western rock face till the narrow set of stairs cut into the rock face lead up to the main gate. 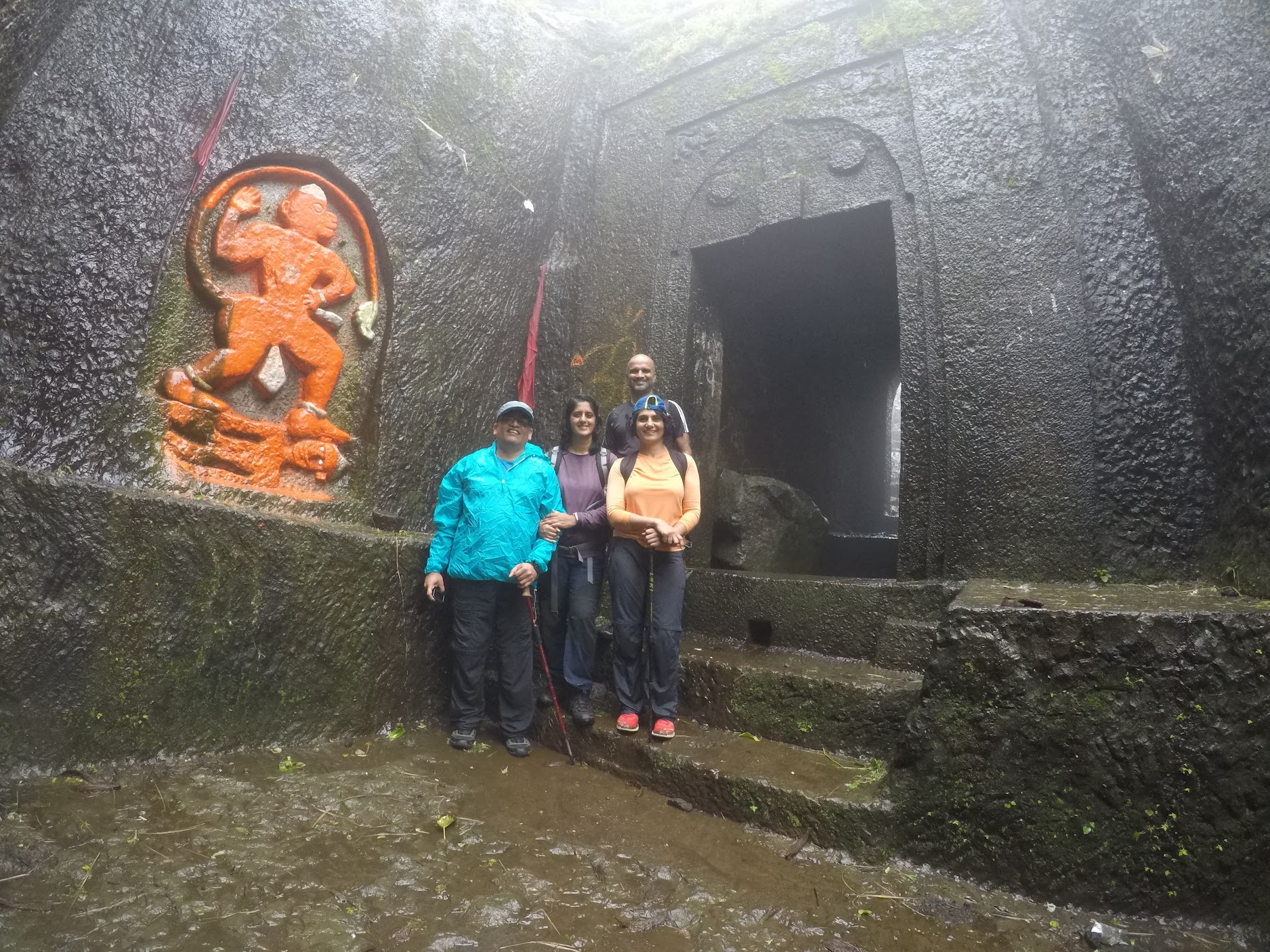 The main gate is the most impressive part of the fort, with a large relief of Lord Hanuman on the wall adjoining the doorway with a holding chamber behind it. Being extremely cloudy, we did not explore the farther areas on the fort itself. We examined the ruins of the castle on the fort and a few water tanks dug into the rock for holding water. 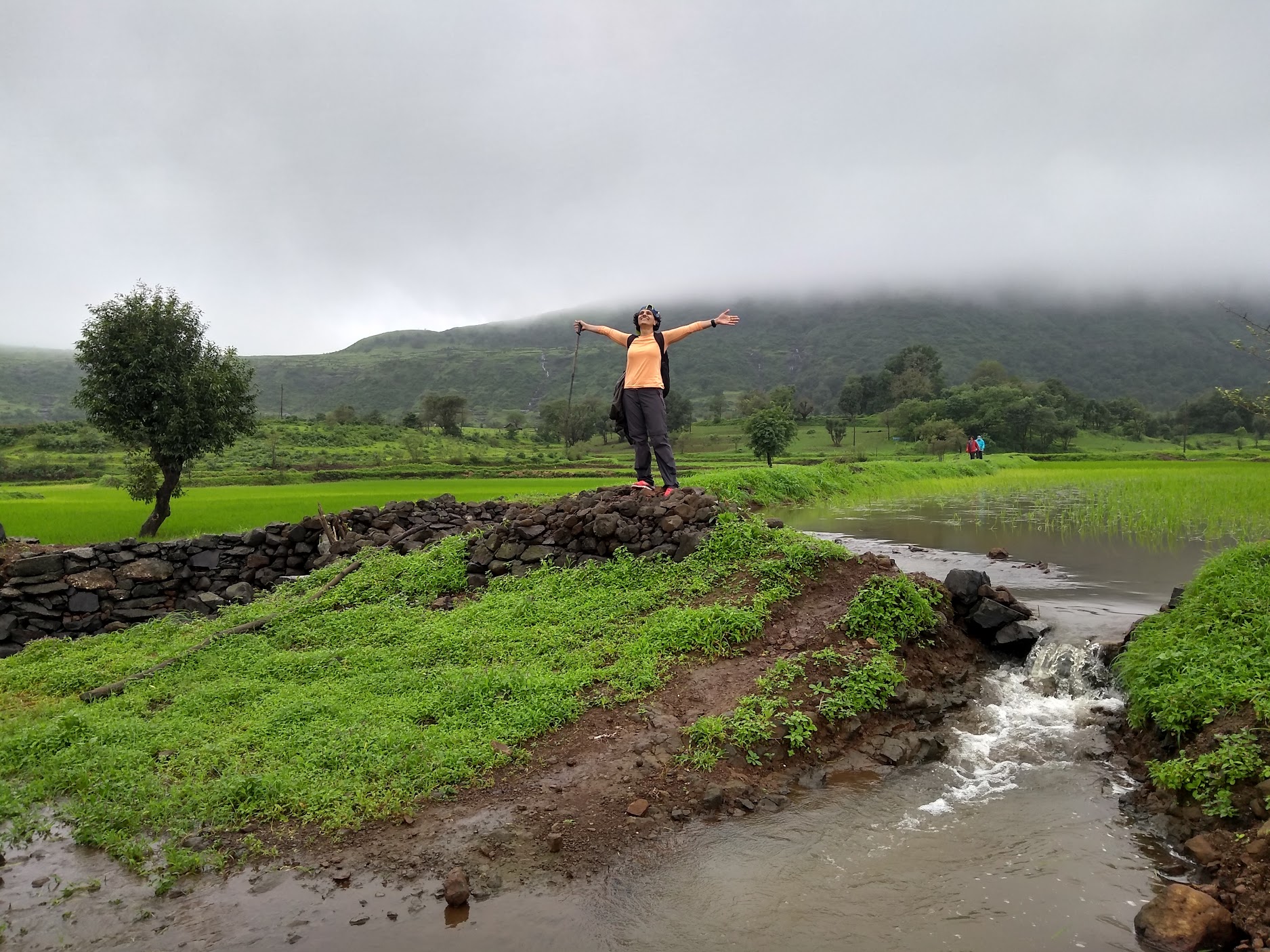 The return path is from the east adjoining the castle ruins, till it meets the ascending path at the ridge. The entire trek can be completed in an hour without breaks. 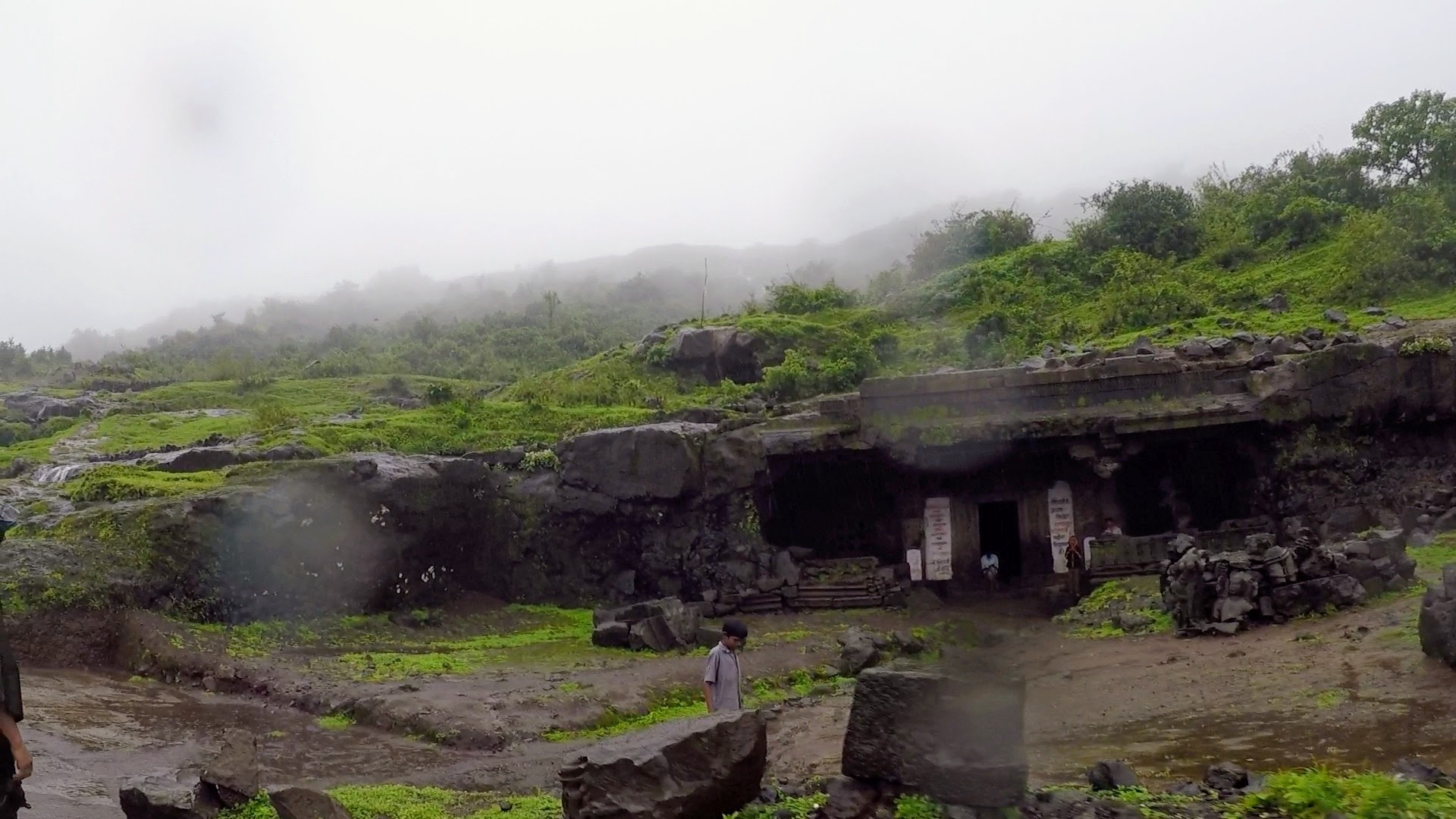 The Jain caves are built in a rock outcropping at the foothills of the fort. The entrance is decorated with a carved frame with pillars that are now disintegrated. The caves were excavated by the Yadavas, who ruled the Deccan region in the 12th and the 13th centuries with their capital at Chandradityapura (modern Chandor, District Nasik) and Devagiri (modern Daulatabad, District Aurangabad) (ref: An inscribed Jain Image from Daulatabad Fort, by M. N. Deshpande in Satabda-kaumudi (1954)) 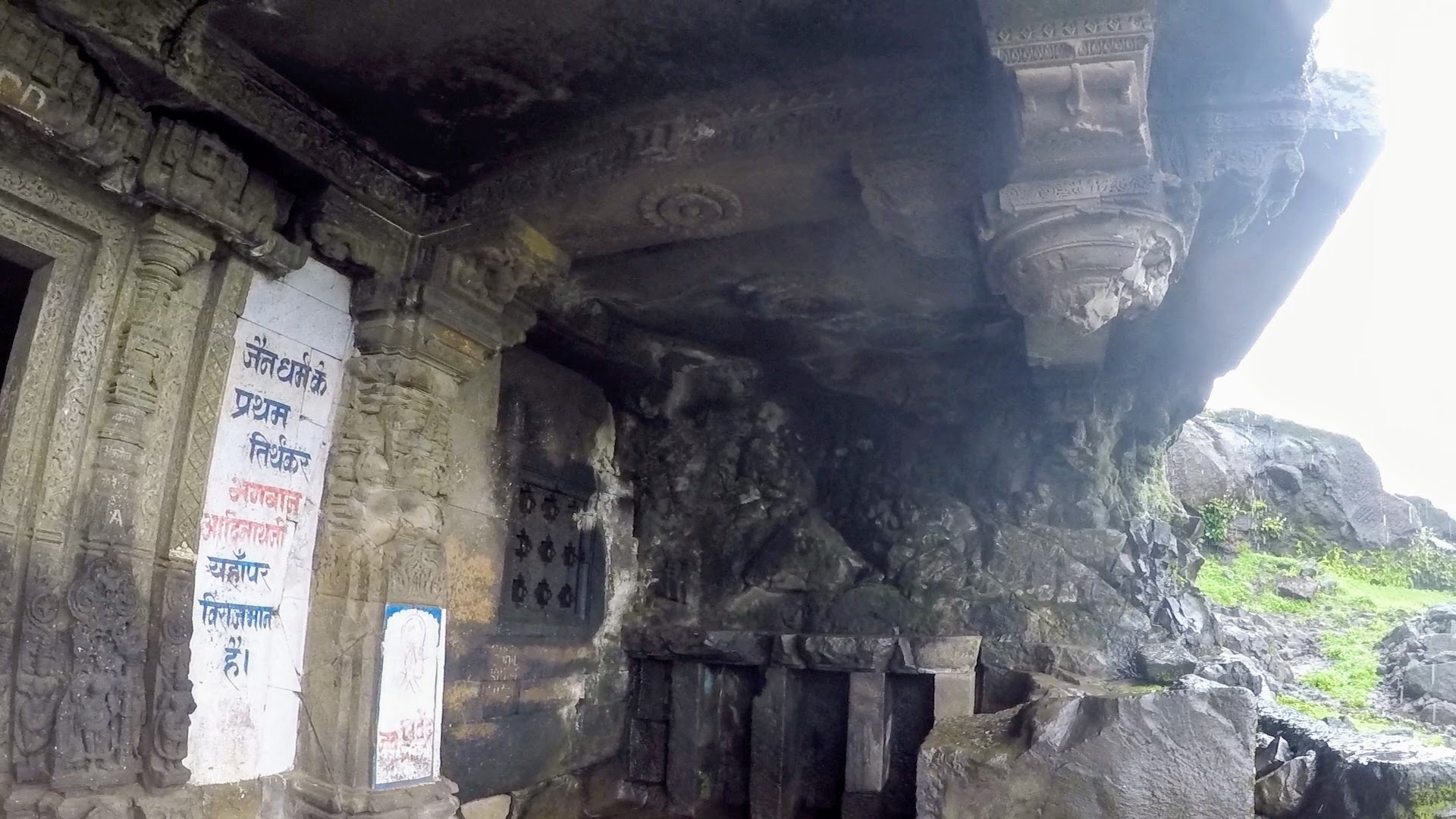 The cave has a verandah on the outside, that has carved walls that are largely disintegrated or destroyed. Along the front of this verandah is a low parapet wall from which rise two pillars, one on either side of the entrance, supporting the outer eave of the verandah. The front of the cave with the main doorway was originally painted, traces of which still remain. 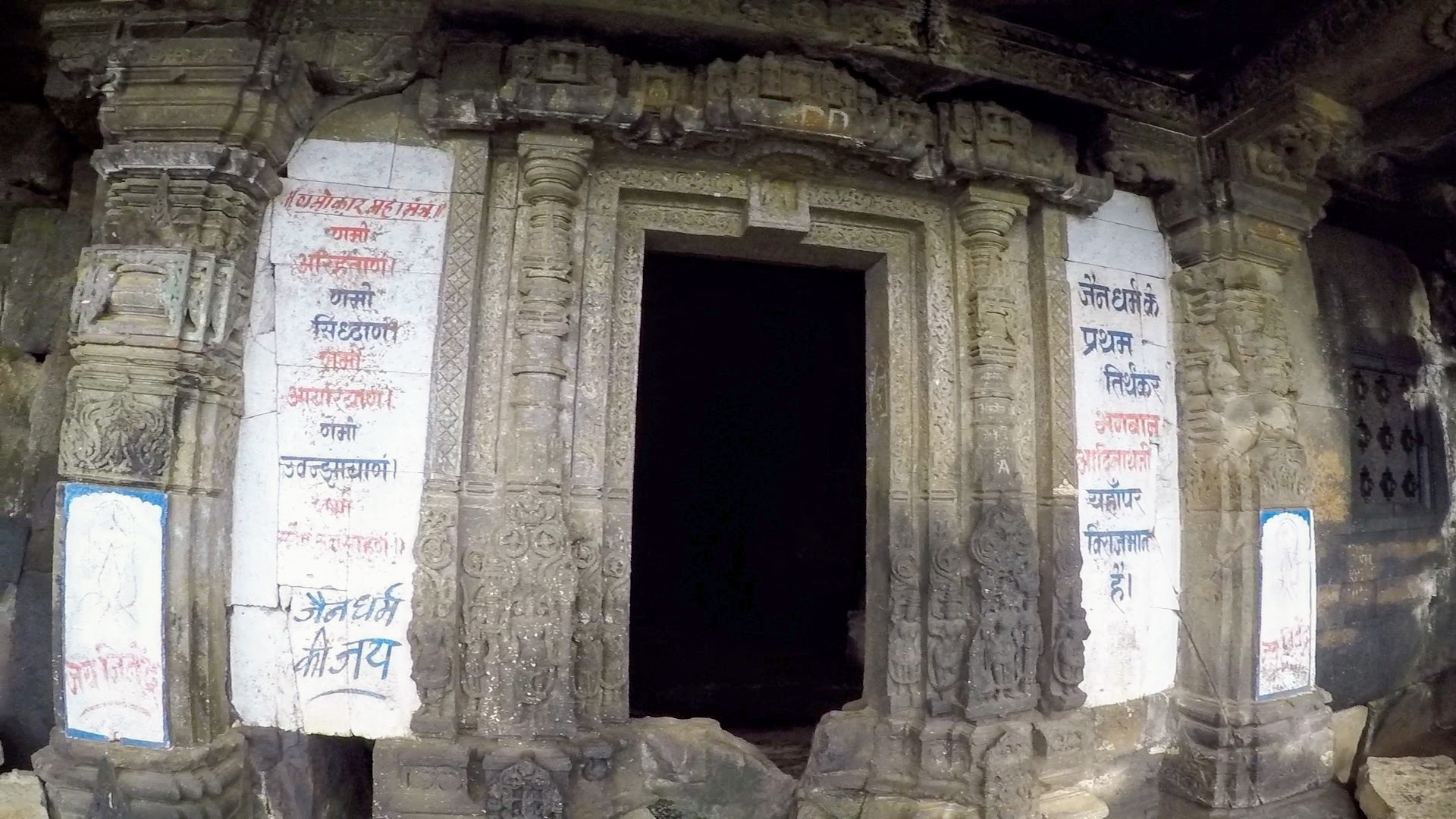 Opposite these pillars are pilasters, and between the latter, is the main doorway into the hall. Beyond these pilasters, and between them and each end of the verandah there is a grille window — two square bars each way dividing it into nine lights. The front of these bars is prettily chased with lotus rosettes at the junctions.
In the centre of the verandah ceiling, and in front of the doorway, hanging in deep relief, is a group of five figures in a circle. The middle figure appears to be assisted or carried through the air by another on either side, while two others, beneath, also help.
The partition wall between the verandah and the inner hall has been entirely built of great irregular blocks of stone well fitted together (ref: Mediaeval Temples Of The Dakhan Vol.27, by Henry, Cousens) 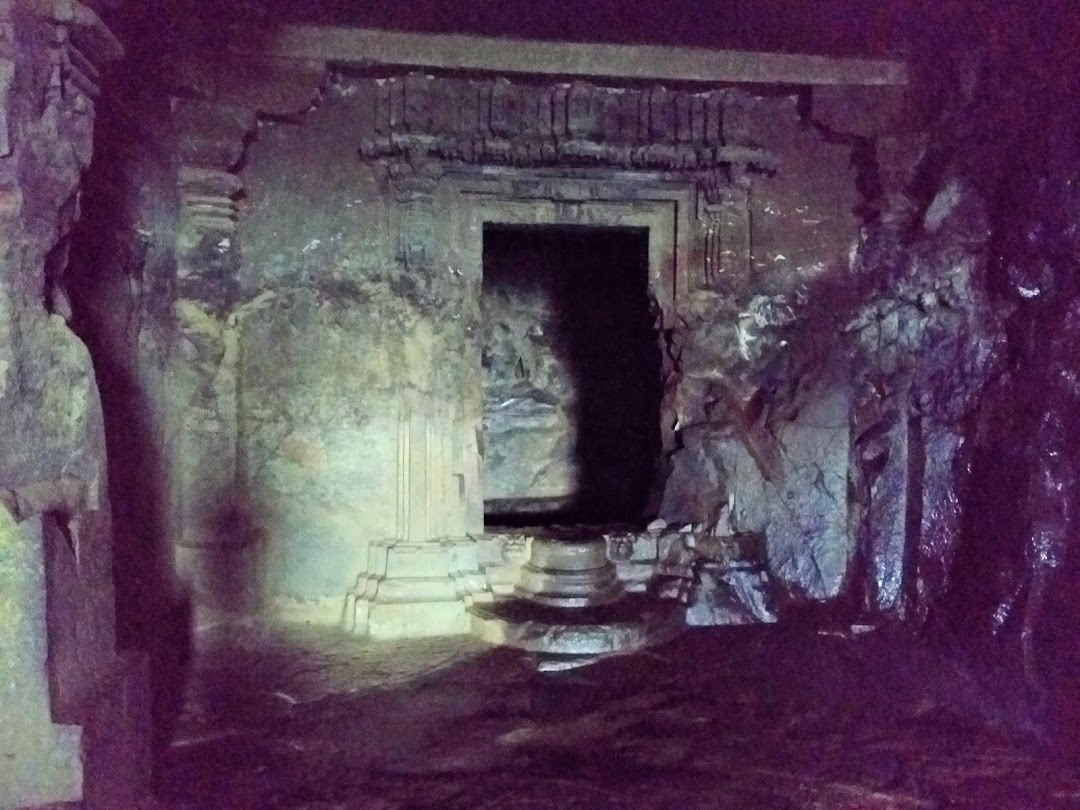 The inner chamber is a large hall, 35 feet square, off the back of which are an antechamber and a shrine. The hall ceiling was supported upon four columns set square in the middle of the hall, The walls and ceiling are plain. Bound the two sides of the south-west and north-west comers are very low continuous altars for images while round the two sides of the north-east and south-east comers are high benches which are not altare. The south-east pillar, only, remains intact; the south-west one is continuous from floor to ceiling, but is much corroded about the middle. The north-west and north-east pillars have completely gone, fragments hanging from the ceiling, and their stumps on the floor, being all that is left of them.
The shrine doorway is much disintegrated, but it was not so elaborately decorated as the front door. Over it, one above the other on three of mouldings, are three Jinas. (ref: Mediaeval Temples Of The Dakhan Vol.27, by Henry, Cousens) 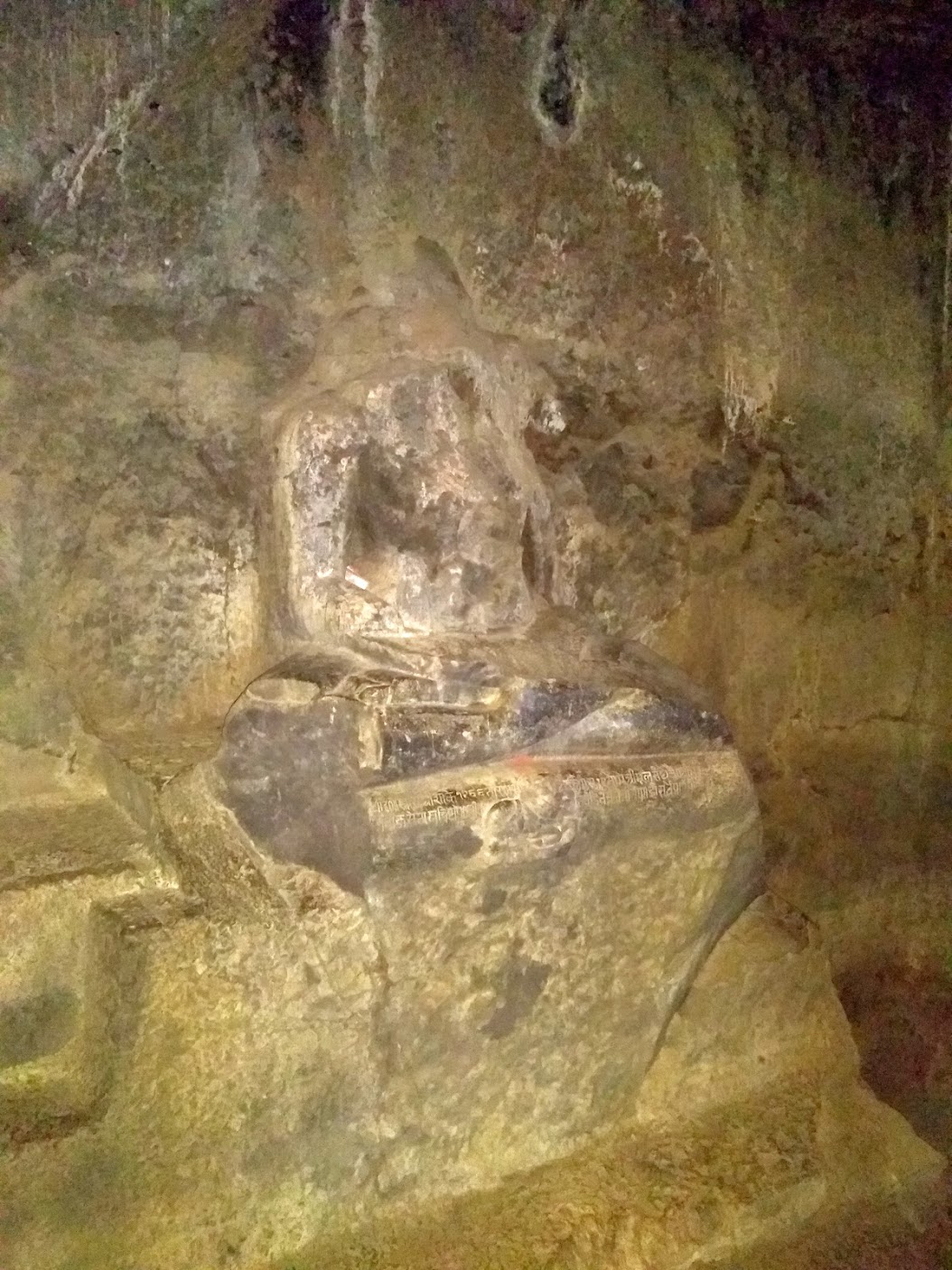 Within the shrine, which is quite measuring 13 by 12 feet, are the remains of a Jaina image upon an altar placed against the back wall. The chest, head and umbrella have been smashed and thrown away — part of the umbrella lies outside the cave — but the legs and the cushion are left. On the middle of the cushion is the bull, showing that the image was that of a Rishabdeva, while on either side of it is an inscription dated Saka 1266.
There was a very fine inscription upon the wall in the north end of the cave, but only a very small fragment of it remains. The letters are small and well shaped. The inscribed surface seems to have been about four to five feet across, but it is not certain how deep. (ref: Mediaeval Temples Of The Dakhan Vol.27, by Henry, Cousens)