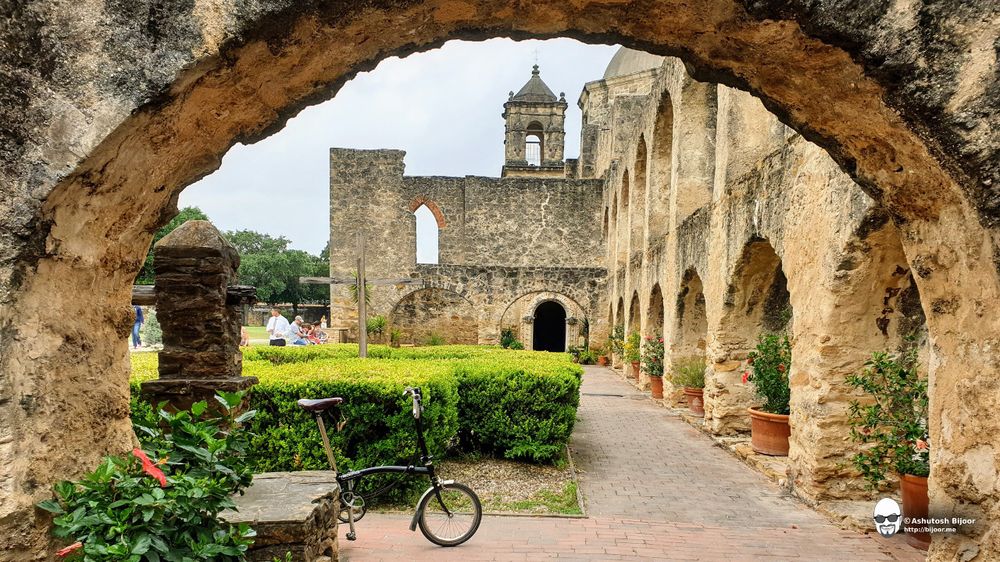 In the last few weeks, I had to back to back visits to the US, covering multiple cities - Orlando, Pittsburgh, Austin and San Antonio. In addition to a hectic but exciting schedule visiting customers and conducting technical work shops, I had my special companion - my folding Brompton bicycle. It allowed me to explore the cycling trails in the cities I visit.

Here is a list of the trails I covered:

On my second visit in three weeks, I visited San Antonio for a customer workshop. I stayed back for the weekend following the workshop to explore some of the trails in San Antonio.

I had previously made friends with Mick, a senior cyclist in San Antonio who in his younger days was a competitive cyclist in his home town in Phillipines. Mick was kind enough to accompany me to two of the three trails I covered in San Antonio on the weekend.

San Antonio has an ambitious plan to circumnavigate the entire city by a series of connected trails, together referred to as the Howard W. Peak Greenway Trail System. Howard Peak was a visionary adventurer who was responsible to initiate and execute the ambitious plan.

As a councilman representing District 9 from 1993 to 1997, he partnered with Councilman Lyle Larson to purchase the land that began the Salado Creek trail system in Walker Ranch Historic Landmark Park.

As mayor from 1997 to 2001, he solidified his vision of hike-and-bike trails along Leon and Salado creeks and won public support to dedicate 1/8 of a cent of the sales tax to begin development of the trail system in partnership with the Edwards Aquifer Program. Peak's efforts and vision throughout his career are why City Council voted unanimously to name the greenway trails for him in 2012 (ref)

During this visit, I rode on three of the trails in San Antonio.

The Medina River trail is located to the south of the city, and is parallel to the Medina river. The pathway winds through the lush woodlands of the Medina River Natural Area. The short, 7 mile trail varies from easy to moderate intensity with slopes up to 8.3 percent in two locations.

And here is the route of the ride:

The Leon Creek Trail runs through western San Antonio, beginning at Loop 1604 and winds its way south. The 18 mile trail runs along the creek and is generally flat with some gentle slopes. The Earl Scott Pond near its northern end is a great place to relax and watch the variety of birds and wildlife.

And here is the route map of the ride:

The San Antonio River Walk Hike & Bike Path is the highlight of the city for both, visitors and locals. It is a place to hike, bike or just hang out. The 30-mile trail winds along both sides of the river, connecting parks, schools, workplaces, shopping, restaurants, and everything a resident or visitor needs.

I started the trail at its southern end - the San Antonio Missions National Historical Park. I visited two of the missions that are located on the west coast - Mission Espada, the oldest mission in Texas dating back to 1690 and Mission San José, the largest of the missions and known as the "Queen of the Missions"

As I rode north along the river, the neatly paved trail has beautiful views of the river, and is lined with parks, athletic fields, restrooms, drinking fountains and benches. And for I was riding on a Sunday of a long weekend, I met several people, both locals from San Antonio as well as visitors

And here is the route map of the ride:

<< Click here to read about the trails I rode on in Orlando and Pittsburgh!