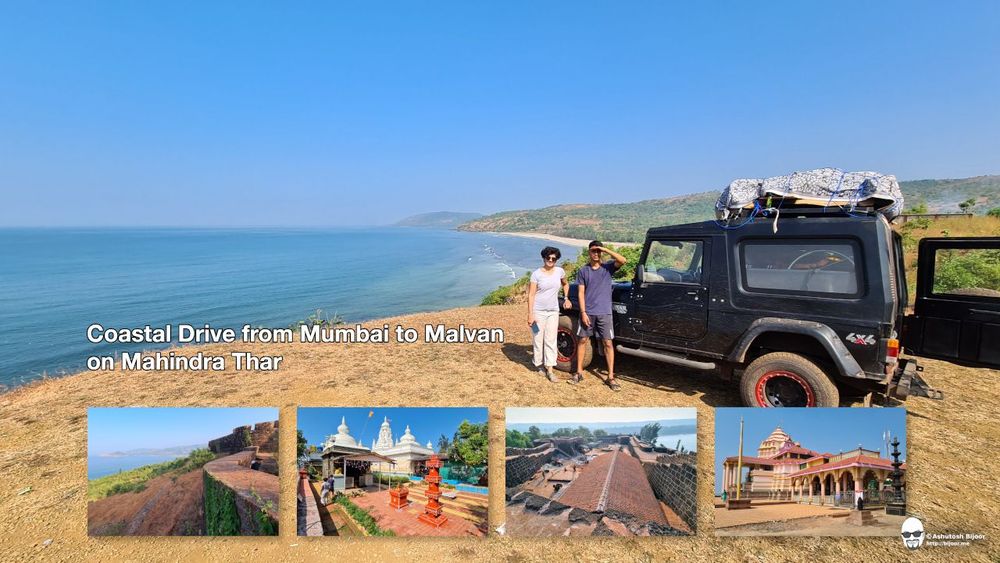 Malvan is a coastal town located on the Konkan coast of Maharashtra, just north of Goa. We had planned a week long workation in Malvan. The idea was to use a weekend to drive from Mumbai to Malvan, then spend the week in a place with good connectivity so we could continue our work-from-home commitments, and then drive back the next weekend. This would also ensure that we would avoid weekend tourists at Malvan. We also chose to stay in a place called Devbag, that is at the southern tip of Malvan at the mouth of the river Karli, so as to avoid better known locations like Tarkarli.

Our visit to Devbag was planned for last week of November 2020. We planned to drive along the Konkan coast from Mumbai to Devbag, with visits to various points of interest along the way. We carried our bicycles so that we could ride to visit some of the beautiful beaches and forts in the Devbag and Tarkarli areas.

This map provides a quick overview of the trip with all the important points of interest, the coastal route we drove from Mumbai to Devbag, and the primary cycling routes that we rode during the visit.

Here is the list of the various highlights of the journey:

The plan was to start early on the weekend and spend two nights at two different places enroute. Our first destination was Atale, a small village near Mandangad. This is the site for our Graminno project for using Technology Innovation for Rural Development. The second halt would be in Ratnagiri. 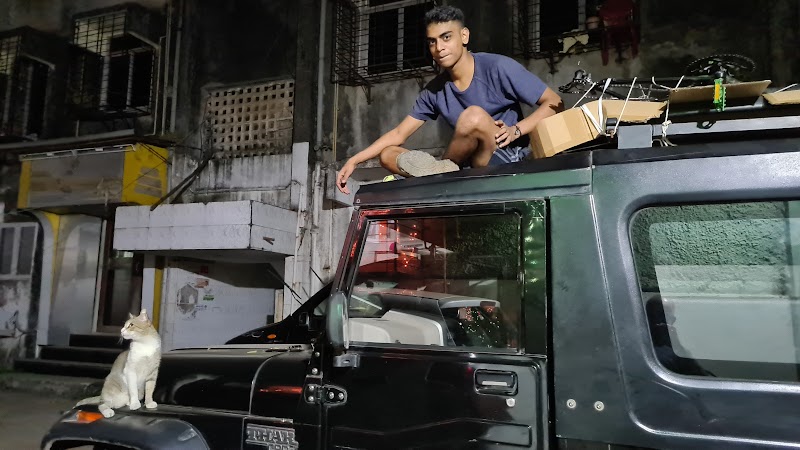 We loaded two bicycles on the Thar's rooftop carrier, and my folding bicycle went inside to keep company with Rohan. Our cat Mika helped inspect the installation to make sure it was safe.

We started early in the morning expecting to reach Atale by afternoon. However, after reaching midway, I realized that I had forgotten to carry my laptop and work bag - and so we turned around and went back to fetch it.

But we still made good time, and managed to enjoy the beautiful drive along the Savitri river to reach Devhare, and then take the small village road to Atale. 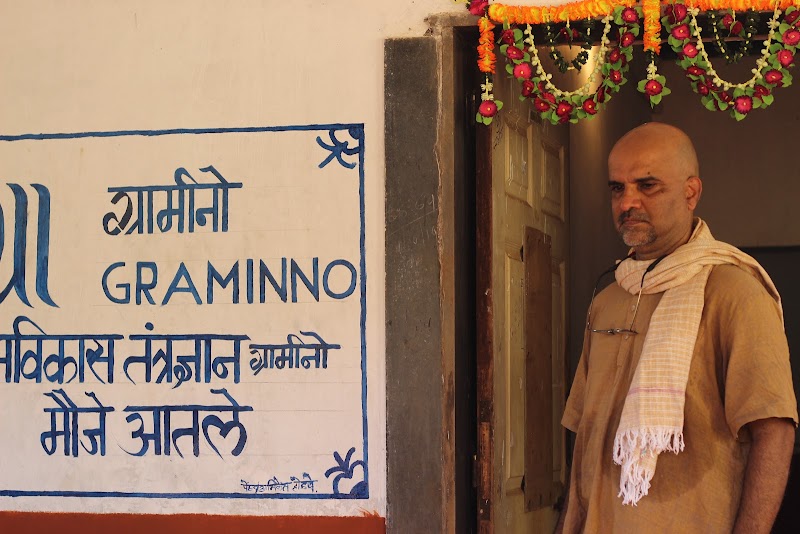 Atale is a small village with just 100 odd homes and a population of around 300. With no access to mobile networks and other resources, Atale suffers the fate shared by millions of small villages in the country - urban migration, unsustainable farming, and poor living conditions. At Accion Labs, we started a project a few years ago called Graminno, where we are using technology innnovations to facilitate rural development. We have setup a workshop in the village, and have facilities for overnight stay for volunteers from outside. 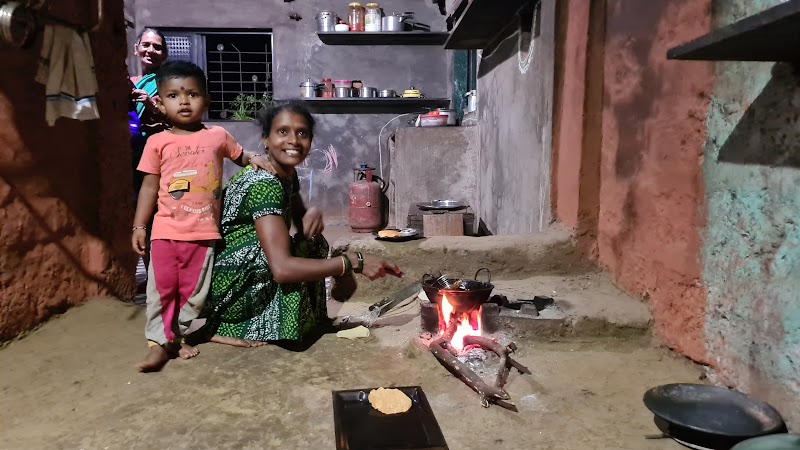 We were rewarded with an amazing dinner that was hosted by Tushar's family. Tushar is the local coordinator for Graminno in Atale. He and is mother, wife Sapna and son Shiva were very gracious hosts and Sapna had cooked an amazingly tasty meal. The highlight was the rice bhakri with chicken curry cooked in typical konkani masala... yummy!

We left Atale early next morning to visit Bankot Fort located at the mouth of Savitri River on its southern coast, across from the well known Harihareshwar temple beach to the north. 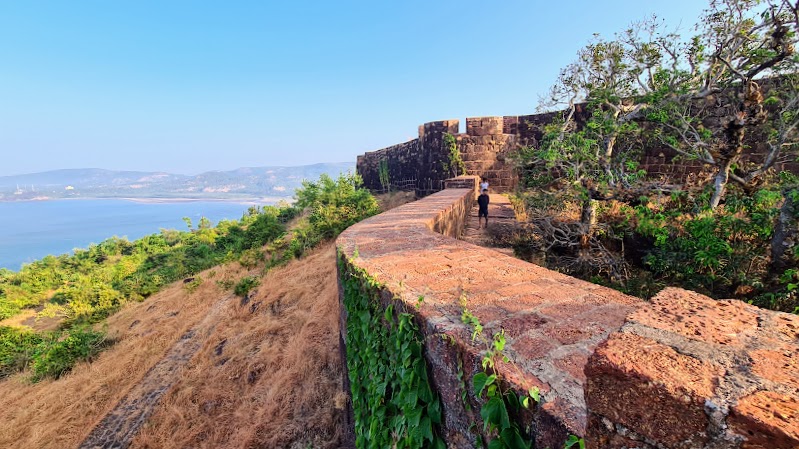 The fort is located on the top of a hill that can be accessed from the Bankot jetty below. We however, arrived at the fort using a road that leads directly to the fort from Atale. The fort ramparts and bastions were in good shape, thanks to the restoration work that is being carried out. However, the trees inside the fort were completely destroyed in the recent Nisarg cyclone. The view of the river and the hillock of Harihareshwar's Shukla Teerth across is quite mesmerizing. But we did not stay for long, for we had to continue on our journey to Devbag!

As we drove from Bankot further south, we took routes that kept us as close to the coast as possible. We drove along the coast from Bankot to Kelshi and then Anjarle, and the road hugged the coast all along. 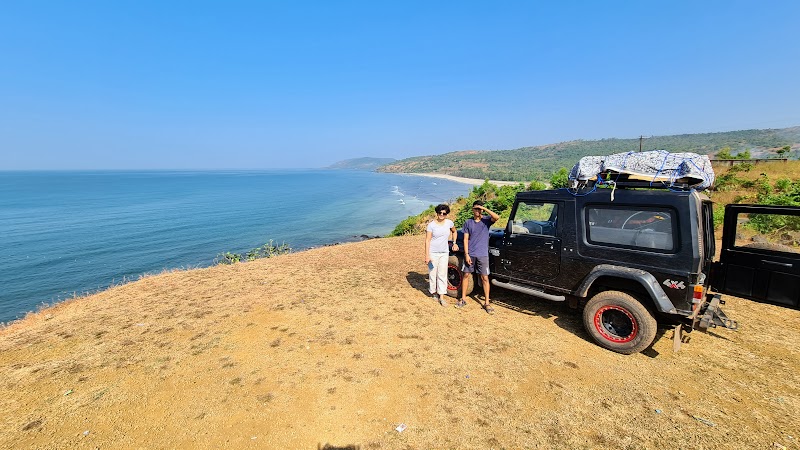 We took a brief halt at this hillock called Friend's Point, to enjoy the view of Savane beach before reaching Anjarle. Anjarle is a beach town located at a distance of 18 kilometres from Dapoli. The temple is located on a hill at the mouth of the Jog river, and can be accessed by a thickly wooded road leading from state highway 4 (SH-4). A plaque in the temple outlines its history as follows:

The original temple was located at near the coast but with the rising level of the sea, the temple got submerged. The new temple was later constructed at the present location at the top of the hill. The construction used the local laterite rock, and was funded by prominent leaders who originated in Anajarle, and was completed between the years 1768 to 1780. During low tide, the remains of the original temple are reported to be visible. 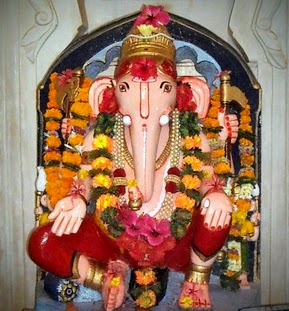 A unique feature about this Ganapati idol is that unlike most idols, this idol's trunk turns to the right instead of the left (उजव्या सोंडेचा गणपती).

A Ganesha idol having its trunk curved towards the right, is called the siddhi vinayaka and needs special worship. It is said that one should be very careful in worshipping such idols. The puja that is performed on such an idol is supposed to be done after fulfilling all religious requirements and by adhering to a strict code of conduct. (ref) A small path at the back of the temple leads to this small shrine at the edge of the hill, which ensconses the footprint of the God. It is said that when the temple was shifted to the top of the hill, Ganapati took the first step at this location, and the second step into the present temple.

If you look carefully in the picture above, you can also see the island of the Suvarnadurg sea fort in the distance.

As we left from the temple to head towards Dabhol, we got a beautiful view of the mouth of Jog river, and the hill on which the temple is located. 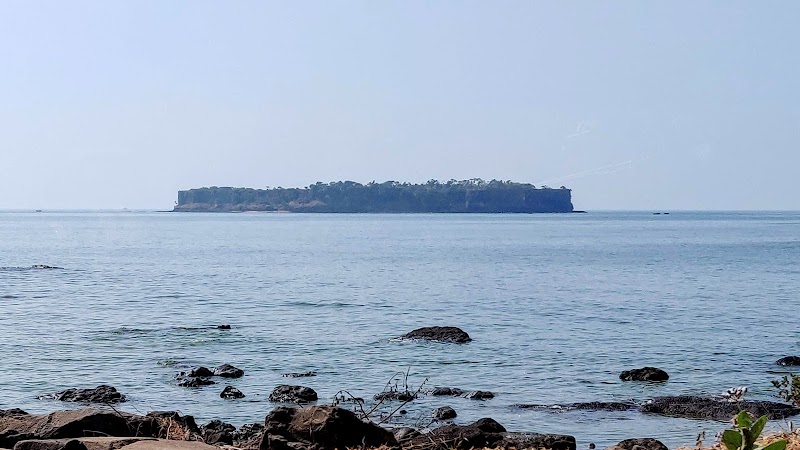 As we drove ahead from Anjarle towards Dabhol, we got to see Suvarnadurg more clearly from the coastal road.

Gateway of Ratnagiri - an overnight halt 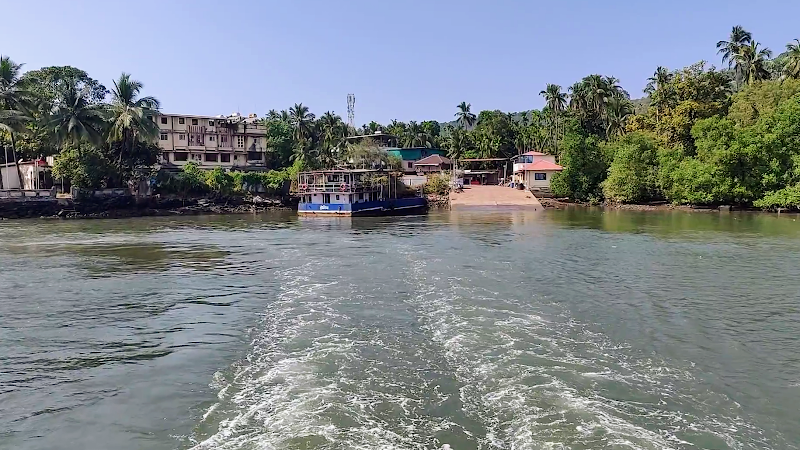 We crossed the ferry at Dabhol to cross the Vashishti river to Anajanvel and drove ahead to Ratnagiri. The road quality improved quite a bit, and we made good time to reach Ratnagiri by evening. As true testimony to the fame of the Ratnagiri Mango, the entire coutryside is full of mango plantations. Literally every square inch of land is covered with mango trees! 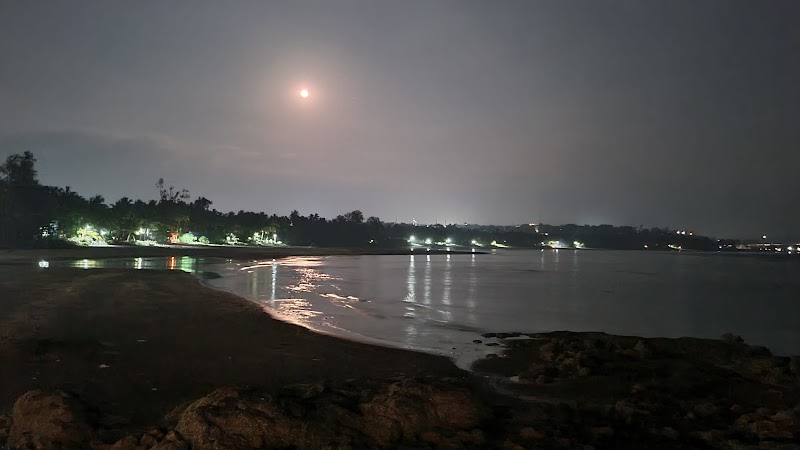 After freshening up in the home stay and resting a while, we drove to the coast to the Gateway of Ratnagiri, where we got to see the full moon shining a silvery glow on the water at the mouth of the Kajali river. We had our first sea food dinner of this trip in Ratnagiri, and set the stage for many more! 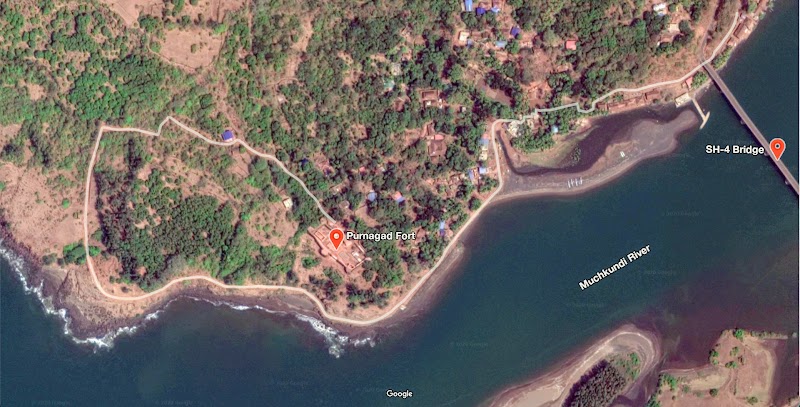 Purnagad is a fort located at the mouth of the Muchkundi river, about 25 km south of Ratnagiri. The fort is on a small hillock that provides a great view of the Muchkundi river and the surrounding beaches. You can reach the fort by walking or driving along the path that branches off from State Highway 4, just before the bridge over Muchkundi River.

This is a mud road that skirts the shoreline and then climbs up the hill from behind the fort. It is avoidable to drive on this road unless you have a 4x4 vehicle. The Thar managed the road very well, of course! 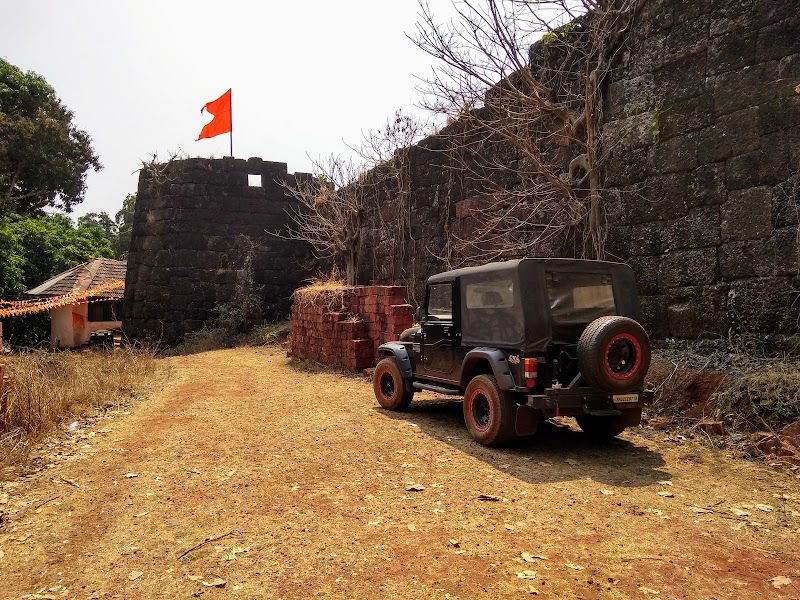 Purnagad was built in 1724 by the head of the Maratha Naval Admiral Sarkhel Kanhoji Aangre. When you reach the fort, the main entrance is not immediately visible. The Hanuman temple situated near the fort is one of the important landmarks here. The Mahadarwaja or the main door is a strong, fine structure made out of lateritic stone and has the images of the Sun, Moon and Lord Ganesh engraved in the middle (ref) The fort was occupied by a group of workers and artisans who were working on restoration work. In addition to restoring the ramparts and bastions of the fort, they are also constructing a walkway around the fort. We were quite pleasantly surprised by the quality of work done. They have used the same material as the original fort - laterite stone, and the work is tastefully done. The workers seem to be from Rajasthan. 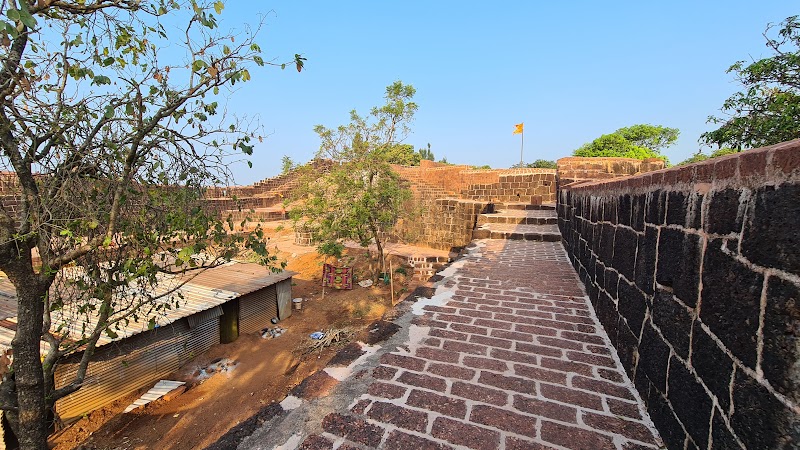 Steps lead up to the rampart and one can walk all around the fort. The views of the Muchkundi river are quite beautiful, and the new walkway around the fort provides the best views.

Kunkeshwar Temple - the pride of Devgad! 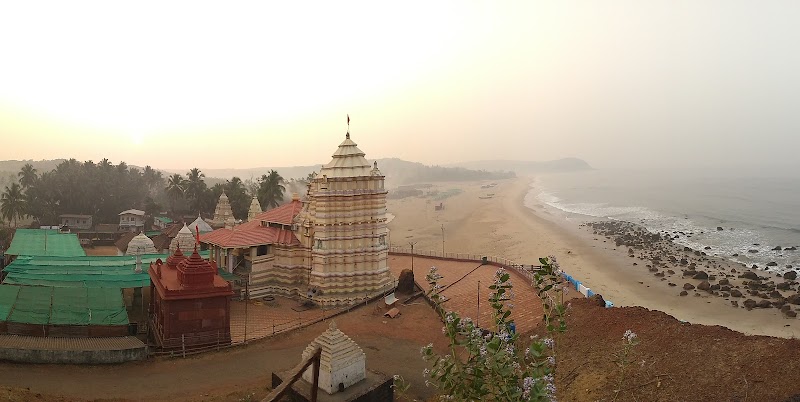 The temple is located on the coast at Devgad, which is about 40 km to the north of the Malvan. The temple is on a hillock and provides a beautiful view of the Kunkeshwar beach. "The temple is a perfect example of Konkani architecture. It has impressive stone carvings on its exterior and interior walls. Maha-Shivratri is the major festival here and devotees from across the country come in large numbers.Many years back, there existed a forest called Kunki in the place where the temple is located. Thus, the Shivling got its name from Kunkeshwar, which means ishwar (god) settled in Kunki forest." (ref)

As we entered Malvan, we were greeted by the serene view of the Kolamb creek. We were famished, and found an amazing restaurant named Bamboo, that provides reasonably priced thaalis with different options for sea food. We had the Surmai thaali, and topped the lunch off with ukadiche modak, a special Maharashtrian dessert that are rice dumplings filled with jaggery and coconut... yummy!!! 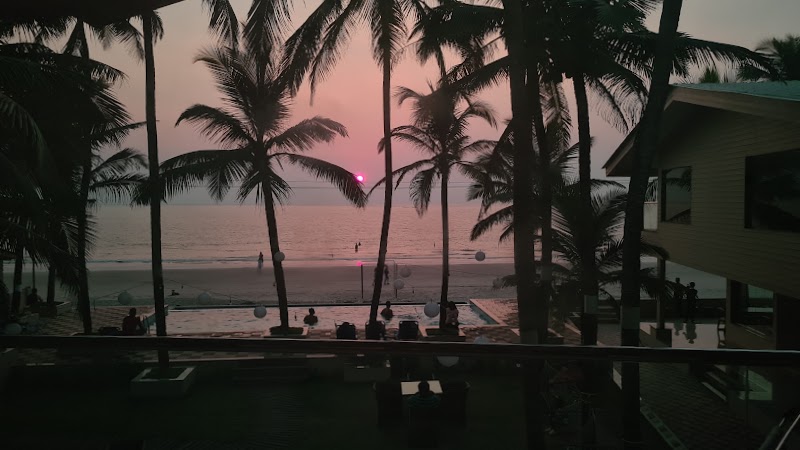 We arrived at our final destination - the Windmill Resort in Devbag, and settled into our room that had this amazing view of the beach.

We were looking forward to a week ahead, that would allow us to spend the mornings exploring the surroundings on our bicycles, and the afternoon and evenings working from our temporary home.

The entire journey from Mumbai to Devbag along the coast was truly a remarkable experience. The Mahindra Thar served us well. Though Rohan was sitting in the back that does not really provide any comfort, the off road sections and many bad roads were not as bad as they would have been on a normal vehicle. Great Experience overall!!! Check out our cycling and trekking adventure to Bhogave Beach and Nivti Fort from Devbag.