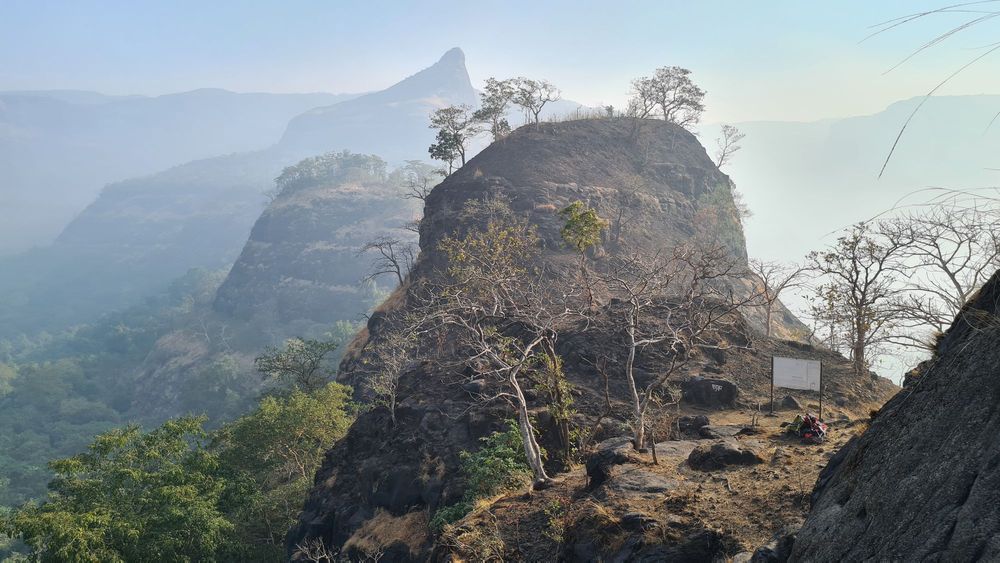 Mrugagad is a small fort that is on the lower end of the mountain ridge that has the Lonavala Tiger Point at the top. The fort can be accessed from the base village called Bheliv, which is accessible from Jambhulpada junction on the Khopoli-Pali road.

At Bheliv, ask for Anant Dalvi (87938-40090) who can accompany you to as a guide to show you the trekking route. Though the route is fairly simple, some sections are tricky and dangerous for novice trekkers. It is best to take a guide along. The total duration of the trek should be around 2.5 hours.

At about half way up the climb, there is a small detour to visit a cave. Do venture into the cave. You have to crouch and crawl into it, but it is worth the experience!

This 3D model of the cave was created by Ashish Patankar and Aniruddh Madav, and shows the interesting pathway of the cave.

Though the cave is habitable, it is avoidable to actually stay here, as the cave is not properly ventilated.

The climb then continues through a chimney to reach the small plateau between the shorter peak and the main peak of Mrugagad. From this plateau, you can access the second cave. Though there are steps cut into the rock, this is a tricky section that needs careful steps. The view from the second cave is fabulous!

The next section of the climb starts back from the plateau, up the steep rock face that has steps cut into it, to reach the top of the main peak, where you are greeted by the altar to the Goddess Mahishasura Mardini - an avatar of Goddess Durga for destroying the demon Mahishasura.

You can then walk along the top of the hill to the other end, where a flag flutters in the wind. Along the way, you can see several water tanks, with ridges cut into the rock for water harvesting.

The entire trek can be completed in about 2.5 hours including the two detours to the two caves.

And just for fun, here is an animated Google Earth Video of the trek route:

Music credits: "The Truth Is Changing", featuring Will Young & Amapondo