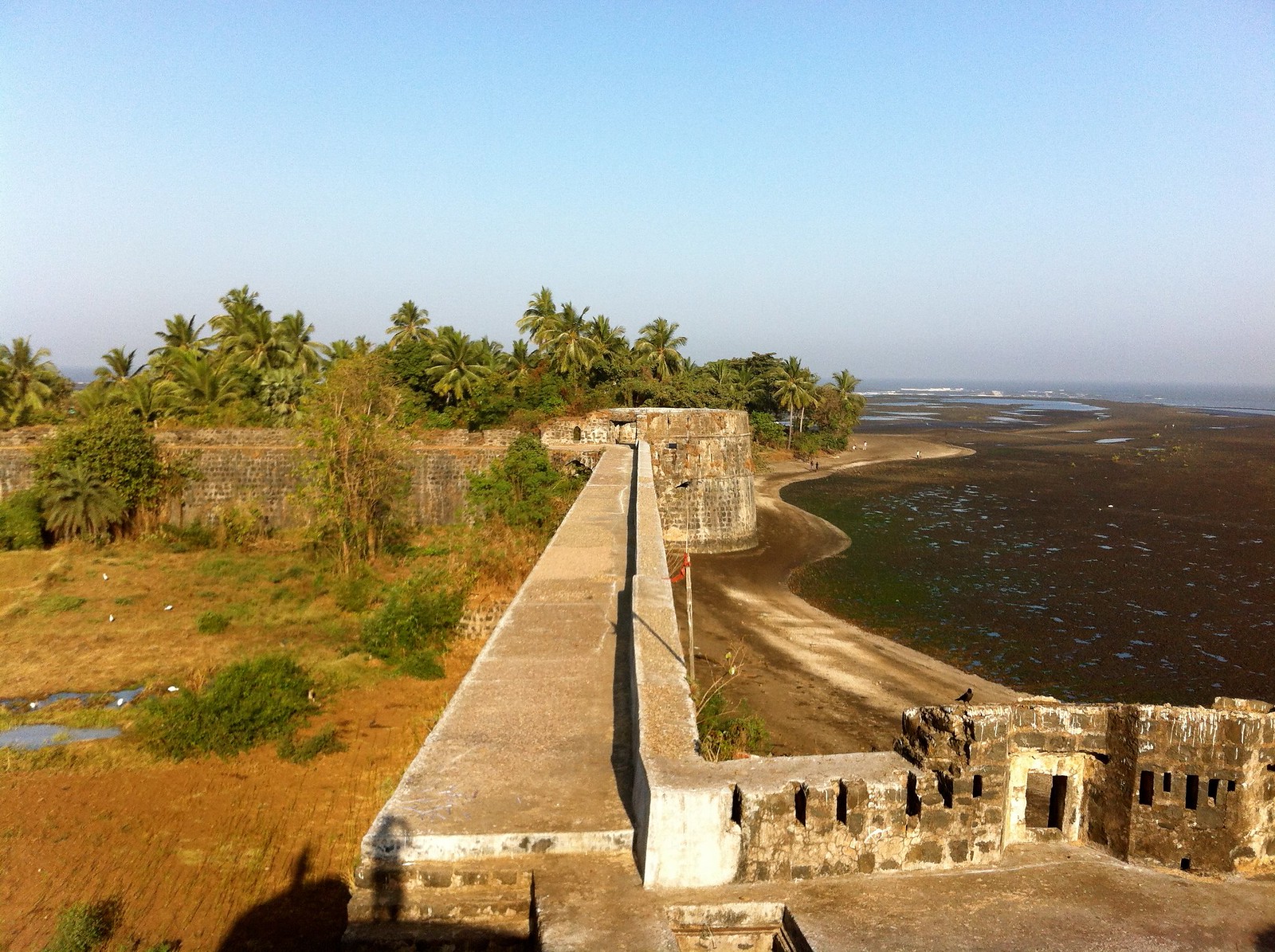 After our bike trip to Bordi on our Bullets, I was itching to cycle along the coast further north of Vasai. And having already cycled to Vasai fort, the next fort along the coast is Arnala.

Arnala is an island at the tip of Vasai, at the mouth of Vaitarna river. One needs to cross over from the mainland to the island at Arnala village on the mainland.

The normal driving route to Arnala village is via Virar, or via Nalasopara. However, there is a shorter route via Naigaon that is around 60 km from Andheri. Instead of going along NH8 to Nalasopara or Virar, one can turn off towards Naigaon, then cross over from East to West at the station using the foot bridge, and then continue north along the coast. Note that this is only viable if you can lift your cycle up and down the foot bridge.

![Sunrise at Giriz Lake](http://farm9.staticflickr.com/8248/8483652987_158fb96287_c.jpg "Sunrise at Giriz Lake") The route follows the coast all along from Vasai to Arnala. It passes through small villages that remind you of Goa. After Bangli, we reach Giriz Lake and catch the sunrise

We then continue ahead to Bhuigaon, then turn on to Kalamb beach road to Kalamb, Rajodi and then Agashi. At Agashi, we join the bigger Agashi Road that leads to Arnala from Virar. Following Agashi road all the way to Arnala village, we take a small crowded street in the middle of the market that leads to the beach. The beach s full of fishing boats, with fishermen busy unloading their haul of the morning, and we have to find our way through to a relatively free spot where the smaller boats can land The red boat you see in the picture above is the one that ferries passengers to and back from the island. It is overloaded with people and luggage, and one has to really squeeze in We have hell of a time loading our cycles and ourselves. In addition, as there is no jetty, the boat stops a few meters into the water, so one has to wade in knee deep water to reach the boat This fisherwoman must be wondering what kind of weird species we must be – intruding on her territory with our helmets, and fancy cycles As we arrive on the island, we were greeted by these numerous sand sculptures of the Shiva Linga, adorned with flowers. We then make our way through the fishing village towards the fort We pause in the village to wash our feet and wear our shoes after the wet boat ride. In seconds, the village kids gather around to admire our cycles An arched doorway under one of the bastions leads into the fort. There are various symbols carved at the entrance to the fort We climb up the bastion over the entrance, which is the highest point in the fort and offers a great view of the beach and the sea A small secret path leads to an almost invisible window that looks into the entrance of the fort. Ideal to ward off unwelcome visitors! We then walk to another bastion at the far end Under each of the fort’s bastions, there are a series of arches that lead into the fort. The arches are always at right angles to the fort interior These two kids are brothers, and they live just outside the fort. They offer to guide us through the fort I find a hidden chamber that has steps leading down to it from the fort wall, and the sun shining in through the single opening makes a perfect shadow As with other forts I have visited in the past, this fort suffers the same ill effects of bad restoration using cement, that spoils the beauty of the fort. However one cant help but concede that some restoration is better than none View of Arnala beach from the fort

The fresh water reservoir inside the well is their source of drinking water, and the fort walls serve to dry their fish – not a very romantic use of a historic monument. It is now close to 11 am and the sun is starting to beat down on us. We take a few minutes’ break in the welcome shade before heading back for the long ride home

Thankfully, though it was noon the breeze was still nice and cool, and we did not have any trouble till we reached the highway. The last stretch home on the highway through the traffic and smoke was a stark contrast to the cool fresh breeze in the villages.

We had a great time on the ride, and looking forward to the next ride to get out of the city!