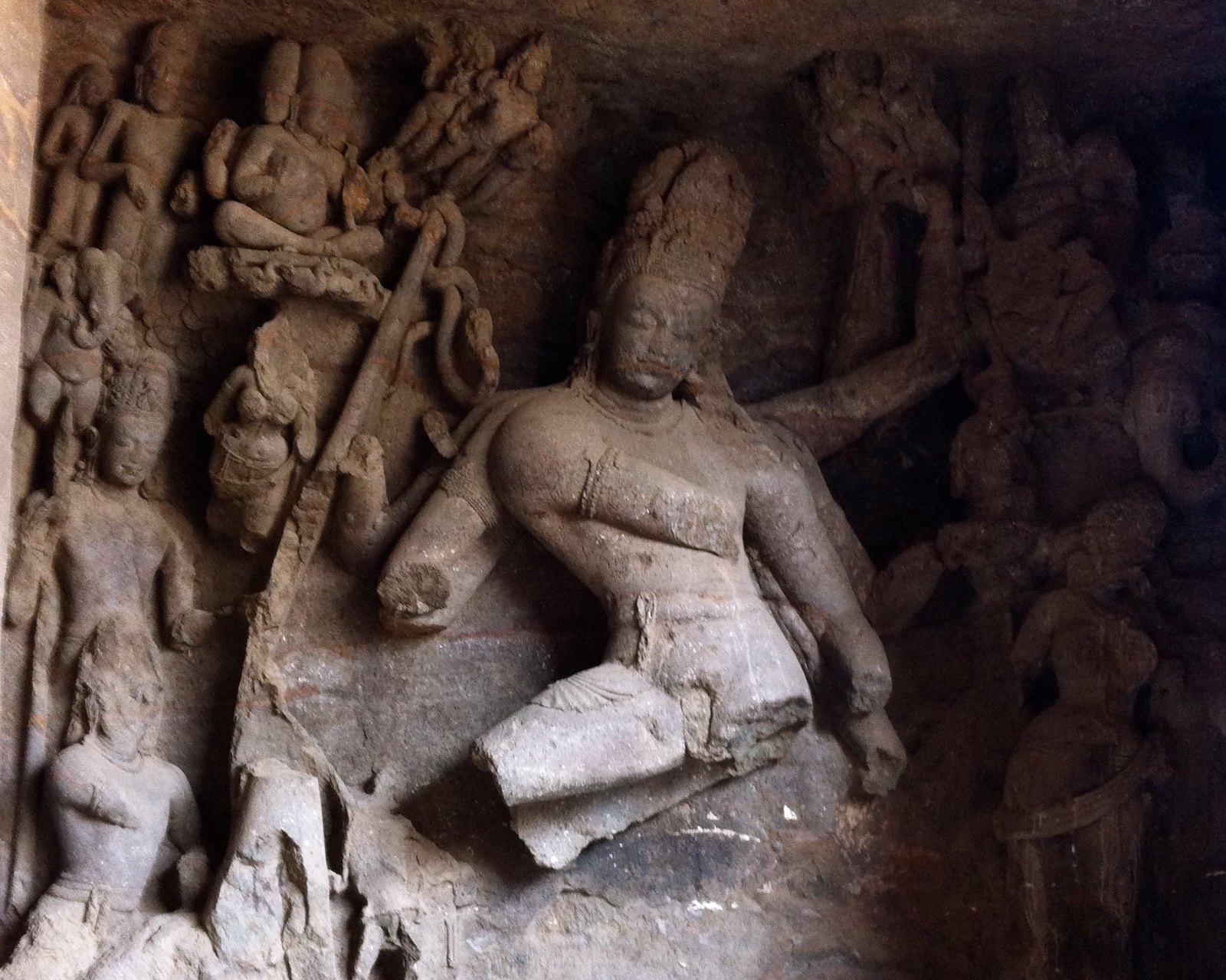 I made this plan as usual at the last minute on Friday night, so it was too late to rope in anyone else. I found out that the first ferry to Elephanta leaves at 9 am. So I left home at 7 am, expecting to reach around 8:30 at Gateway of India.

The ride to Gateway was quite uneventful except for this completely weird scene. I reached Gateway in just over an hour, and went looking for the ticket window to buy a ticket for the ferry to Elephanta. I asked them if I could take the cycle on the ferry, and the guy at the counter looked at me as if I was nuts! He said to me “There are only hills there… where will you cycle?”. When I insisted, he asked me to check with the ferry driver if he would be willing to take the cycle. I managed to convince the ferry driver to take my cycle along. He charged me the usual Rs. 150 for the return fare and took Rs. 50 extra one way charges for the cycle. Oh and Rs. 10 extra if you want to sit on the top deck! Cycle on ferry to Elephanta

The ferry ride was beautiful! Cool morning breeze, seagulls following the ferry all the way, sights of some ships and huge barges moored off shore. I asked around for the road up to the caves and was directed to a small hidden way behind the shops. The road goes all around the island from the jetty to the caves, hugging the coast all along. A beautiful ride! Idyllic road to cycle in Elephanta

The road passes through the Raj Bandargaon, which is one of the three villages on the island – the other two being Shet Bandar around the ferry wharf, and Mora Bandargaon. After the village, the road gradually climbs up the hill and reaches at the top of the stairs, at the entrance to the caves complex. The pillars in the main cave at Elephanta

The main cave, also called the Shiva cave, Cave 1, or the Great Cave, is 27 metres (89 ft) square in plan with a hall (mandapa). At the entrance are four doors, with three open porticoes and an aisle at the back. Pillars, six in each row, divide the hall into a series of smaller chambers. The roof of the hall has concealed beams supported by stone columns joined together by capitals. Smaller shrines are located at the east and west ends of the caves. The eastern sanctuary serves as a ceremonial entrance
– Wikipedia This sculpture is of Shiva in the Nataraja avatar, doing the tandav dance. It is unfortunate that the sculpture is damaged. One can imagine its beauty when it was fully intact. The Trimurti at Elephanta

Described as a “masterpiece of Gupta-Chalukyan art”, the most important sculpture in the caves is the Trimurti, carved in relief at the back of the cave facing the entrance, on the north-south axis. It is also known as Trimurti Sadashiva and Maheshmurti.
– Wikipedia The Gangadhara image to the right of the Trimurti, is an ensemble of divinities assembled around the central figures of Shiva and Parvati, the former bearing river Ganges as she descends from the heaven.
– Wikipedia In the chamber to the east of Trimurti, is the four-armed Ardhanarishvara carving. This image has a head dress (double-folded) with two pleats draped towards the female head (Parvati) and the right side (Shiva) depicting curled hair and a crescent. The female figure has all the ornamentation (broad armlets and long bracelets, a large ring in the ear, jeweled rings on the fingers) but the right male figure has drooping hair, armlets and wrist-lets. One of his hands rests on Nandi’s left horn, Shiva’s mount, which is fairly well preserved.
– Wikipedia Ganesha in the east wing at Elephanta

The west wall depicts the Ashta-Matrikas (eight mother goddesses), flanked by Kartikeya and Ganesha, the sons of Shiva. Some of Matrikas are depicted with children, but all of them are shown by their respective mounts (bull, swan, peacock, a Garuda, etc.) which identify them. At the east end of the portico is another chapel with a plain interior and sunken floor
– Wikipedia Monk posing in front of Shiva and Parvati

The niche image carved on the south wall is an ensemble of divinities assembled around the central figures of Shiva and Parvati shown getting married. Parvati is seen standing to Shiva’s right, the ordained place for a Hindu bride at the wedding. Brahma is sitting as the officiating priest for the marriage. Vishnu is witness to the marriage. Mena, the mother of Parvati is seen standing next to Vishnu. The moon-god Chandra, seen with a wig and a crescent, is standing behind Parvati holding a circular pot with nectar for the marriage ceremony. Just above the main images, a galaxy of divinities, bearded sages, apsaras (nymphs), Vidyadharas, Yakshis, Gandharvas, Bhringi, and other male and female attendants are seen as witness to the marriage ceremony showering flowers on the divine couple.
– Wikipedia There are nice shady walkways in the cave complex, and they are maintained quite well, and clean. Thankfully the crowd was not much, and it was a pleasant morning! To the south-east of the Great Cave, is the second excavation which faces east-northeast. It includes a chapel at the north end. The front of this cave is completely destroyed, only fragments of some semi-columns remain. The chapel is supported by eight eight-cornered columns and two demi-columns and is irregular-shaped. At the back of the portico are three chambers; the central one has an altar and a water channel (pranalika), though the Linga is lost.
– Wikipedia

Having completed my mandatory tourist activity, I was itching to climb up to the top of Cannon hill. A small path leads up the hill to the right of the stairs. It was steep, but possible to ride up in low gear. The path is surrounded by forests and one gets an occasional glimpse of the water and the pier below. After a short climb up, one can see the first cannon. At the top of the hill is the second cannon. Presumably the cannons are built by the British. Cannon no 1 at Elephanta Cannon no 2 at Elephanta

Having reached the top of the hill, it was time for the best experience yet – the downhill ride!

See the video below to get an idea about the entire route:

This was one of my most enjoyable rides in and around Mumbai. And I’ve discovered a new cycling route! This should be a great attraction for all cyclists, for the distance is not long, but really scenic, and for the slightly adventurous, the down-hill ride is a bonus!

All in all, a lovely weekend activity!

See the cycling route map below: