Having done an interesting ride to Elephanta Caves, I was planning to ride to the other famous Buddhist caves in Mumbai – Kanheri Caves. With no specific plans this weekend, I made the usual last minute decision of cycling there on Saturday night, and roped in Sameer to join this adventure.

We were hoping to be able to convince the forest officials to allow us to use the route via Vihar Lake, but found out that the road was permanently closed after the leopard attacks in the park. So we had to take the normal route from Borivali National Park. However, as the distance is quite short, we decided to do a bit of a round-about route in Aarey before heading out to Borivali.

Here is the route we took – a total circuit of just above 50 km. 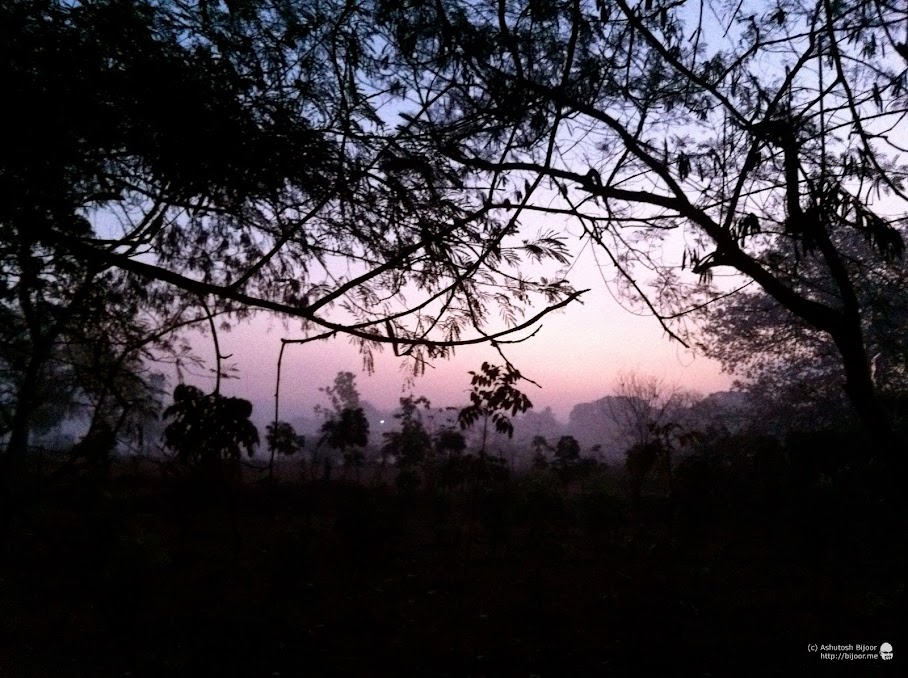 We started our cycling tour from Aarey Milk Colony at 6 am, just as the light of dawn started penetrating the darkness. The street lamps cast an eerie glow on the street. 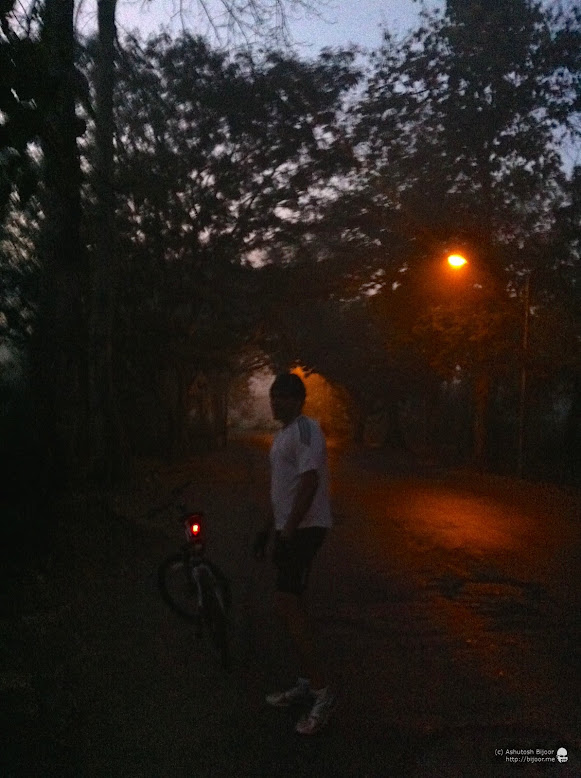 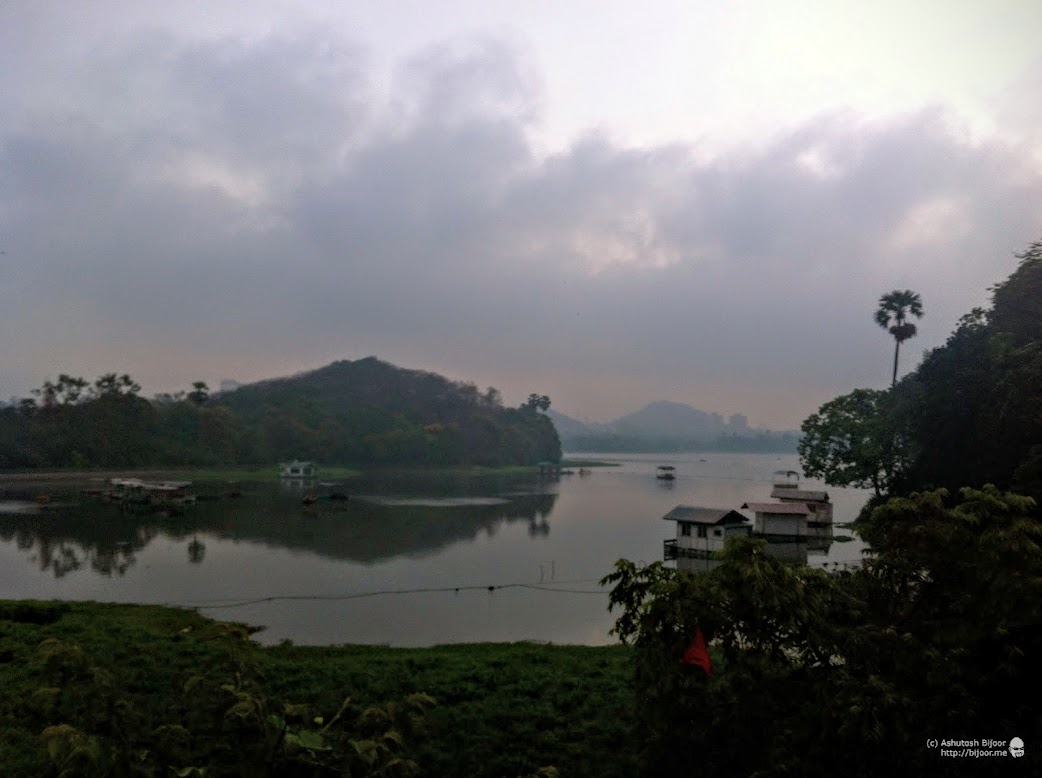 Our first stop was at Powai lake. Though it is April, the clouds looked ominously like monsoon… but rains are always welcome in Mumbai! 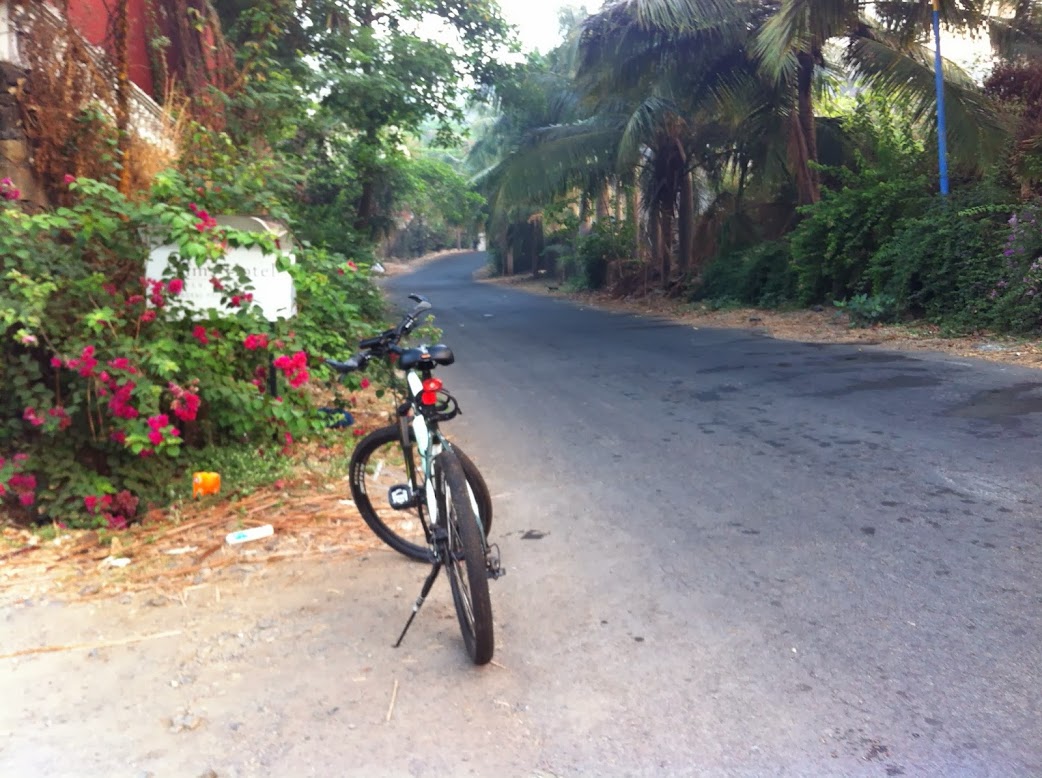 We then returned to Aarey via Royal Palms to then take the Western Express Highway to Borivali National Park. 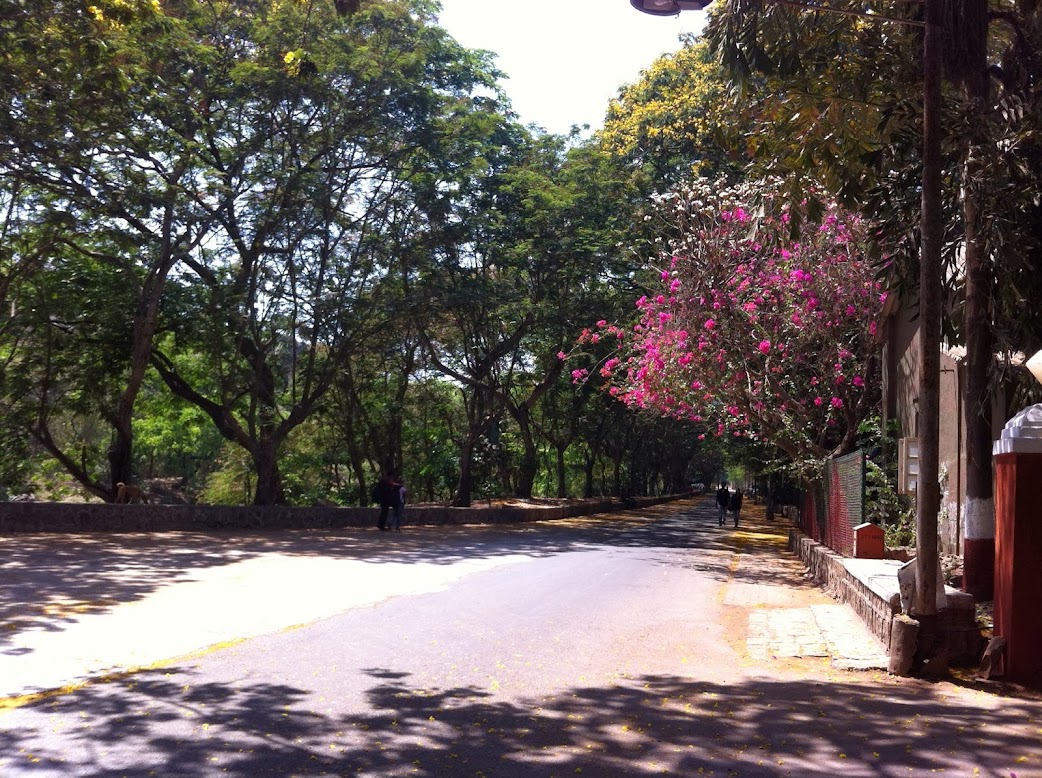 The park opens for cyclists at 7:30 am and we were there exactly in time to be let in. There were hordes of visitors waiting in line to get in, and we stood in the queue for buying tickets, and then headed inside towards Kanheri Caves. The road in the park is beautiful, surrounded by dense jungle on both sides, and yellow flowers lining the roads on both sides. There were several visitors who were walking or jogging, as well as some cyclists. We met Jagat, a fellow cyclist who joined us till Kanheri 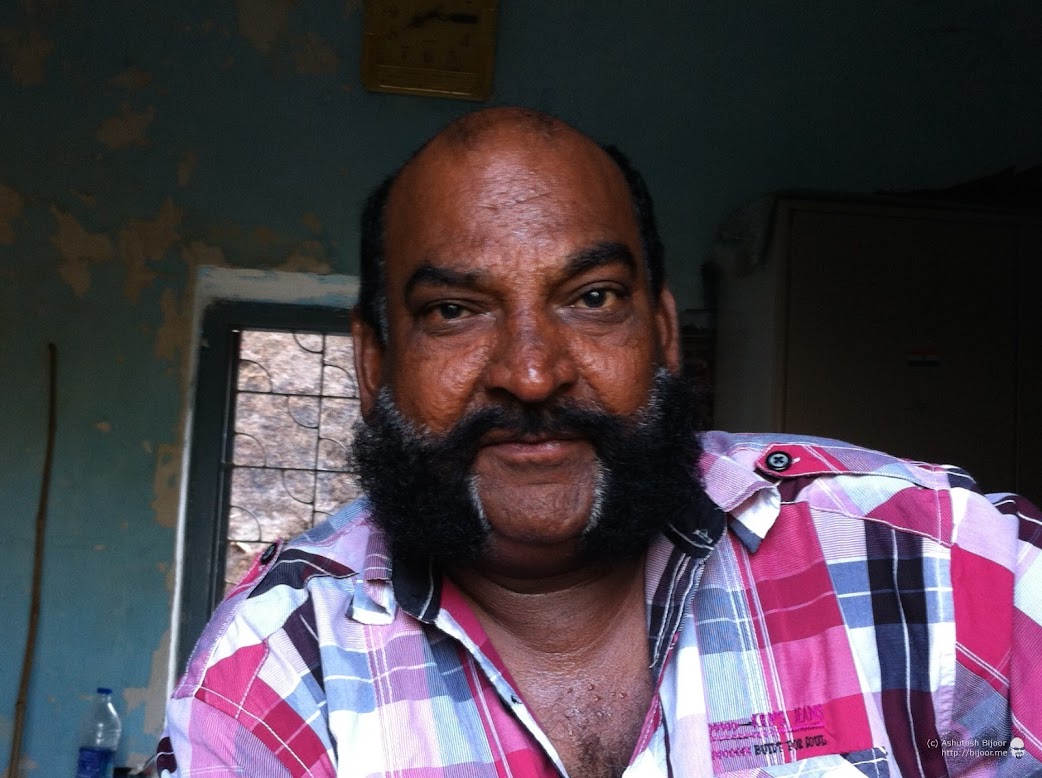 At Kanheri, we had to park our cycles below the caves. We locked both mine and Sameer’s cycle together to a pole, and headed up to the caves. The ticket booth was managed by an impressive ex-armyman with imposing looking mustaches 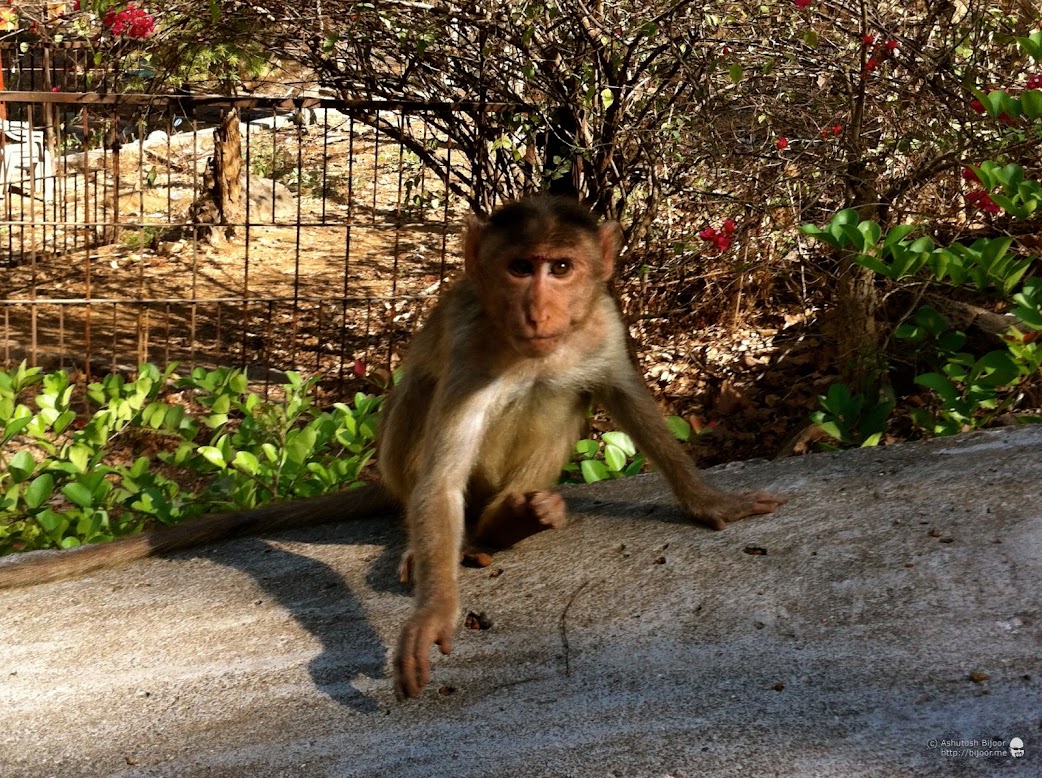 There are lots of monkeys around near the base of the cave. This monkey was about to snatch my phone as I was taking its photograph. The monkeys here are very bold, and actually come and snatch food and water bottles from your hand. I saw one monkey snatch a bottle, puncture it with its teeth and try to drink. When if did not manage to do so, it threw the bottle back to the owner in anger! 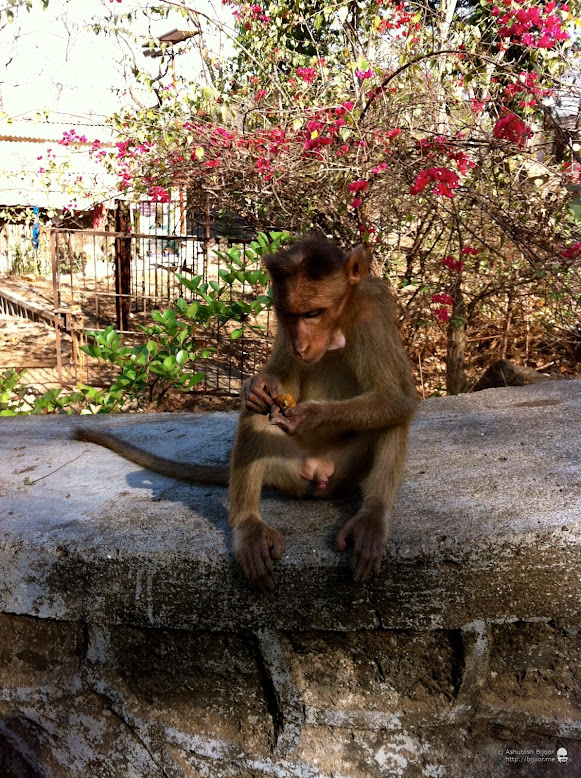 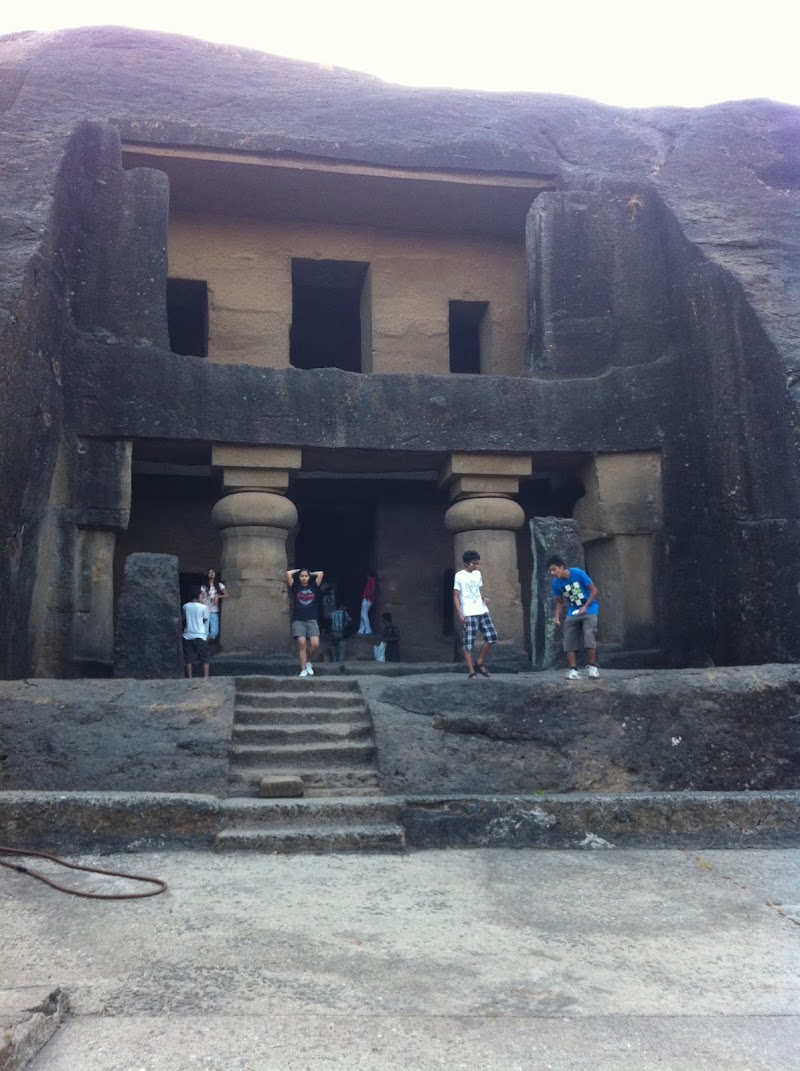 The first cave number 1 is an unfinished chaityagrha, originally planned to have a double-storeyed verandah and a porch, apart from the pillared hall 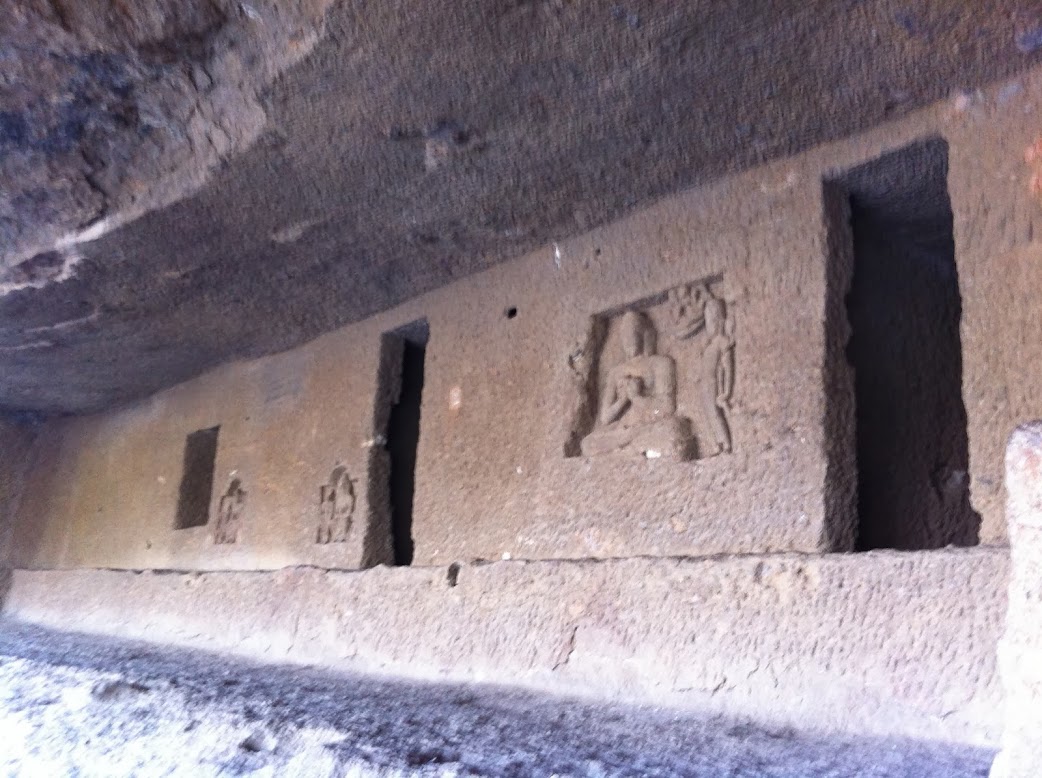 Cave 11 which is also known as ‘Darbar Hall’ consists of a huge hall with a front verandah. It has several sections. 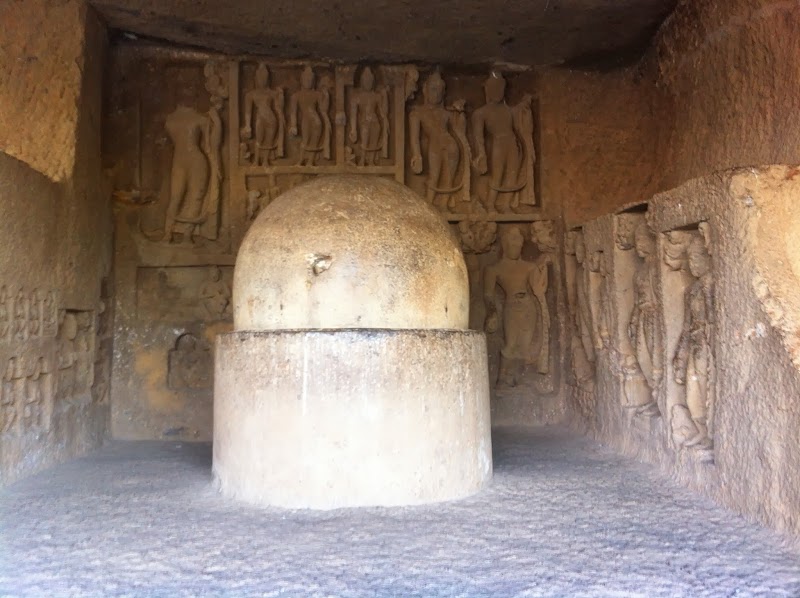 One such section has a small hall with a stupa. The hall has a shrine on its back wall and cells on two sides. The floor of the hall two low stone benches resembling Cave 5 of Ellora

All the walls behind the stupa are exquisitely carved with various forms of the Buddha. These panels show the Buddha in standing positions 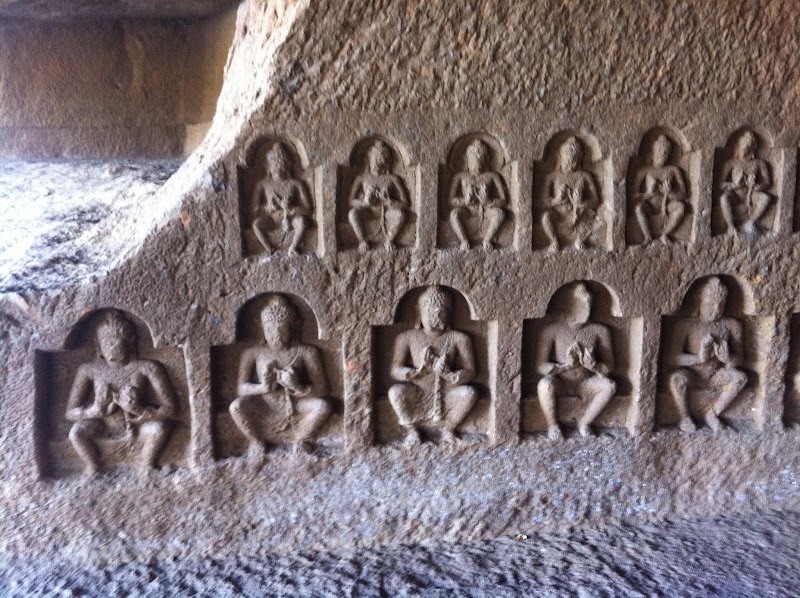 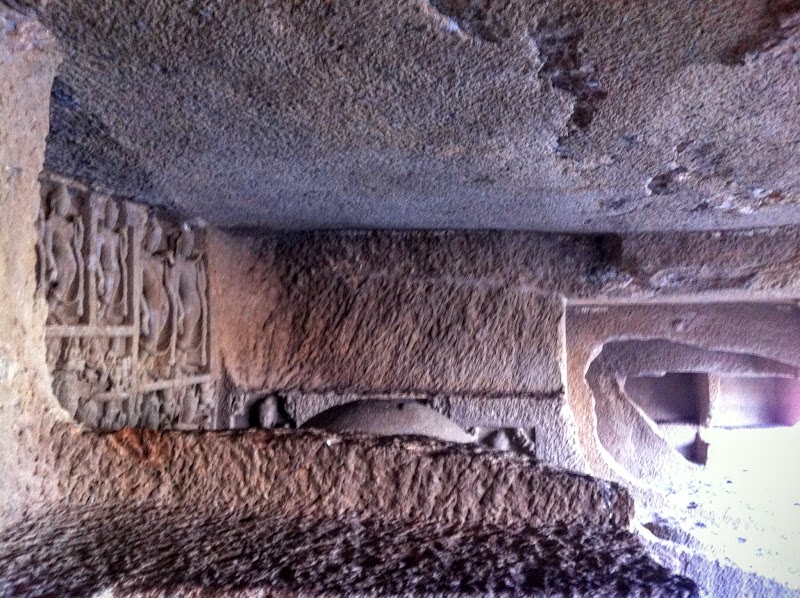 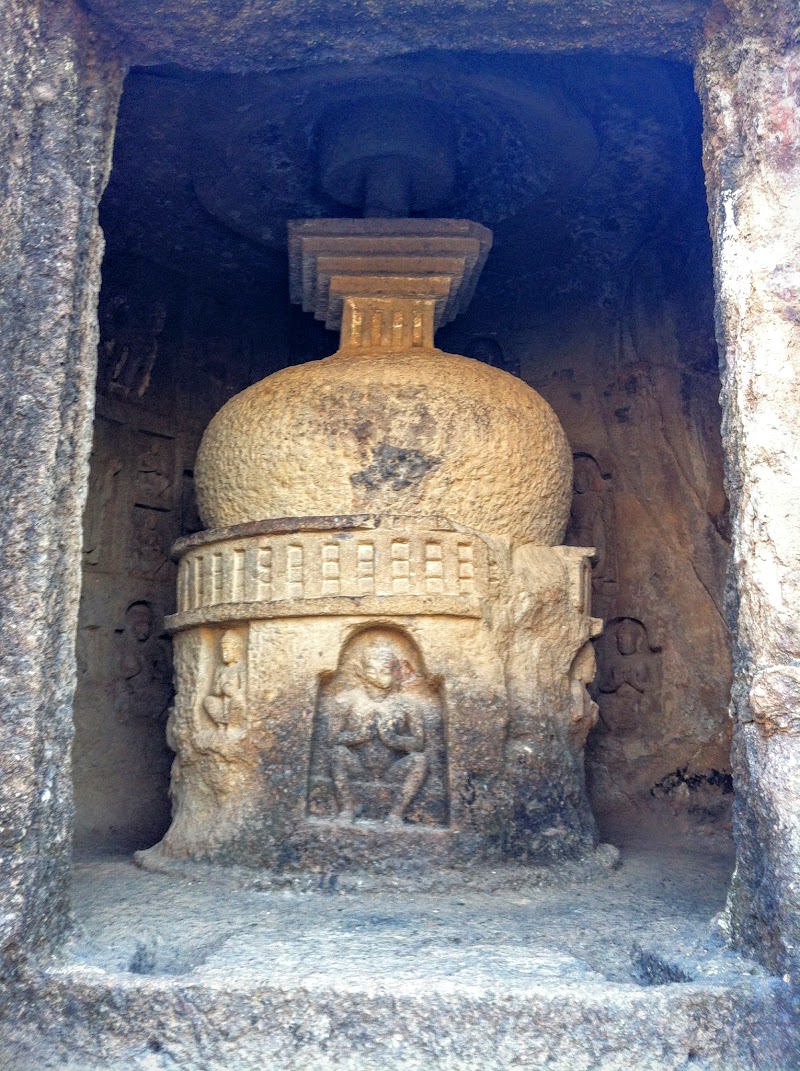 Cave 4 has a small and intricately carved Stupa

I did a bit of research to find what the significance of a Stupa is, and found this info:

The stupa, universal throughout Asia, evolved into more than a reliquary monument. It has become an expression of the ideal of Enlightenment. Statues represent the Buddha’s body, Dharma texts his speech. Stupas are representations of the Buddha’s mind. They reveal the path to enlightenment, or how the mind can actualize its full potential and be transformed into enlightenment. Stupas can be seen as an expression of the five elements.

– Earth, which spreads out in the four directions, provides the solid basis.
– The dome is the garbha (“womb”), primordial, creative
– Water – formless potentiality. It is also called the anda, or egg.
– The conical spire is Fire, which always rises upwards. It represents the wisdom which burns away ignorance.
– The crescent moon is Air, expansive, waxing and waning (an ancient symbol of the feminine).
– The circle is Space, wholeness, totality, with no end or beginning.
– Finally, above the circle is a jewel, which represents a higher state of reality, gone beyond the five elements. It is the ushnisha, present on the crowns of all Buddhas, revealing their perfect, enlightened state. This ascent to perfection is laid out with precision in an Enlightenment stupa. 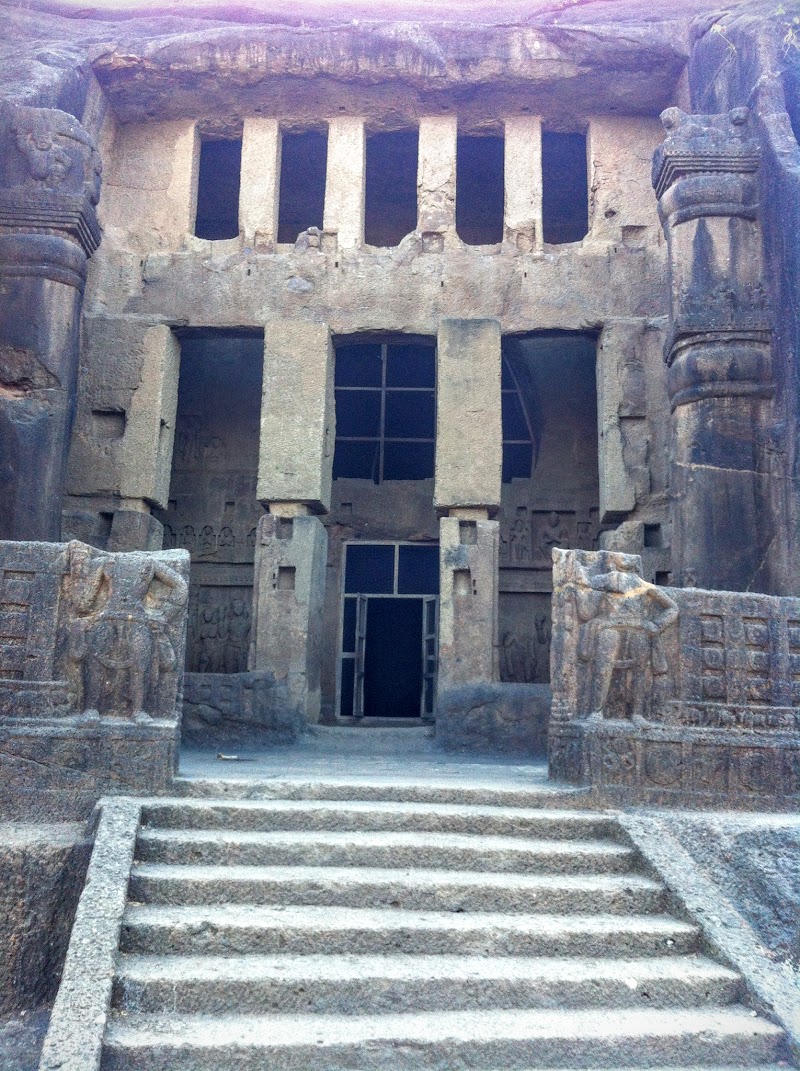 The most prominent among the excavations at Kanheri is the Cave 3, which is a chaityagriha which was excavated during the period of Yajna Satakarni (c. 172-201 A.D.). The entrance of the cave has three doorways 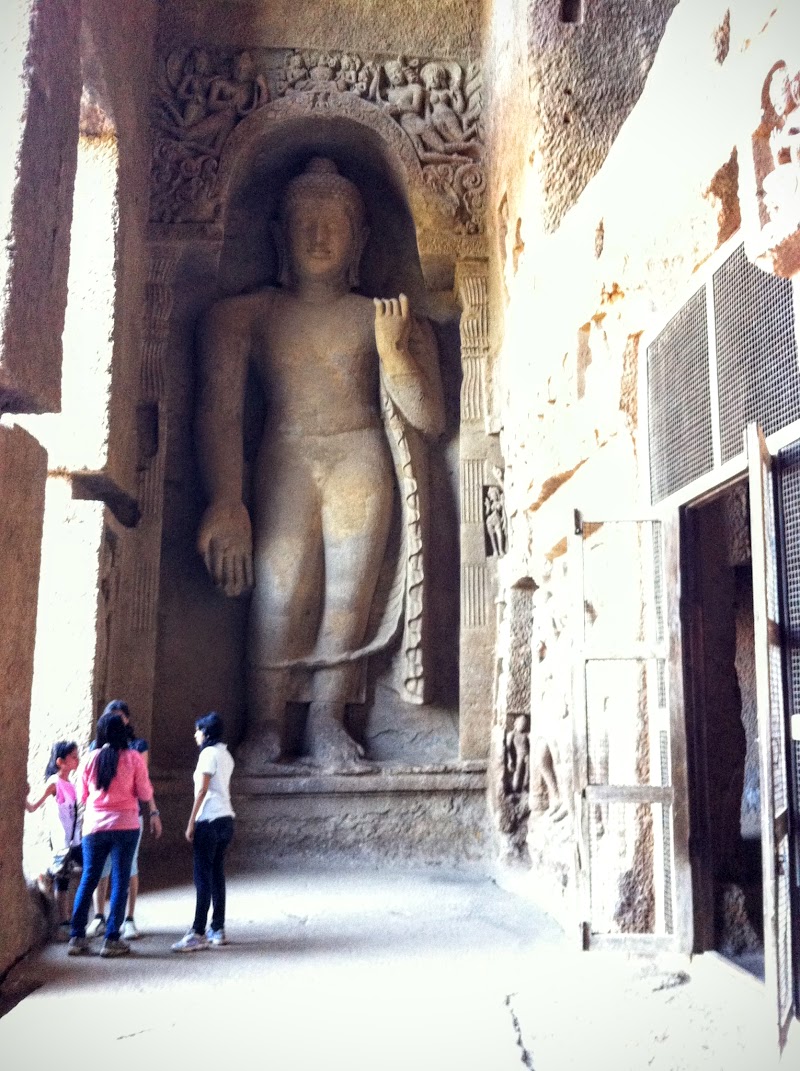 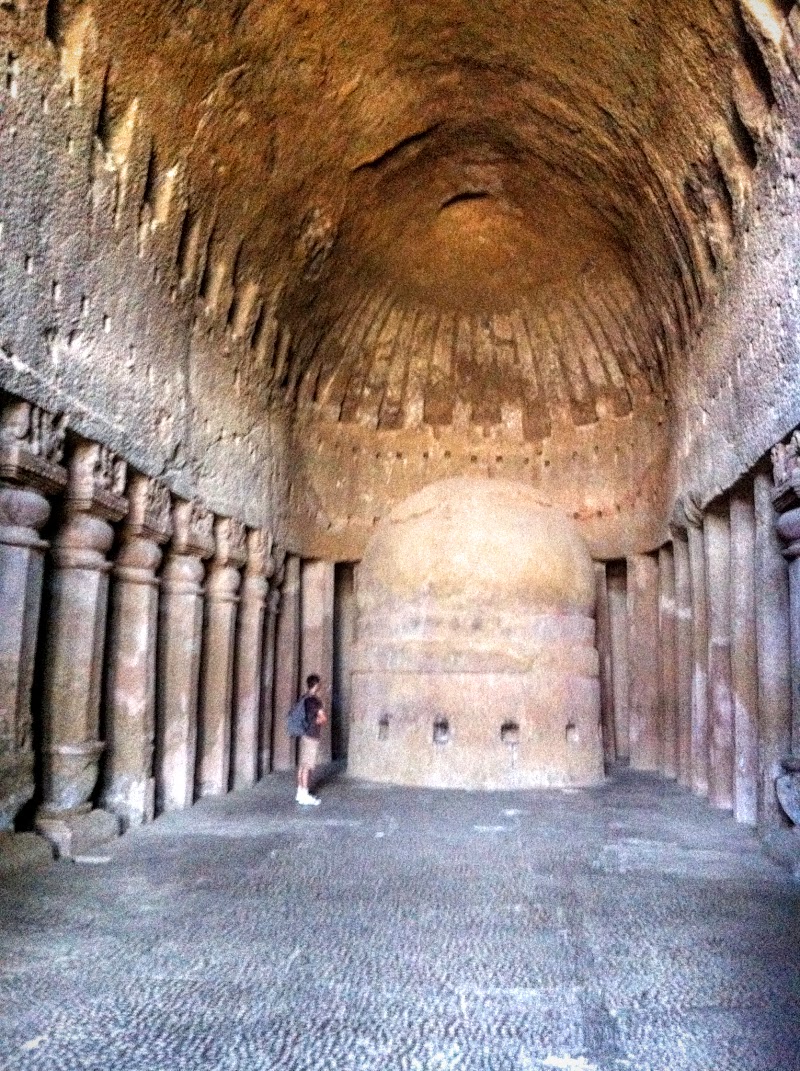 The chaityagrha inside this cave is one of the largest in India. The chaityagrha closely resembles the one at Karle in Pune. It consists of a large rectangular hall with an circular back, a verandah and a spacious court in front. A row of 34 pillars divide the hall into a central central area or “nave” flanked by two aisles on either side. The roof of the nave is barrel-vaulted while that of the aisles is flat. The pillars have different styles and shapes and are not really symmetrical. The stupa at the back is at the center of the circular area. 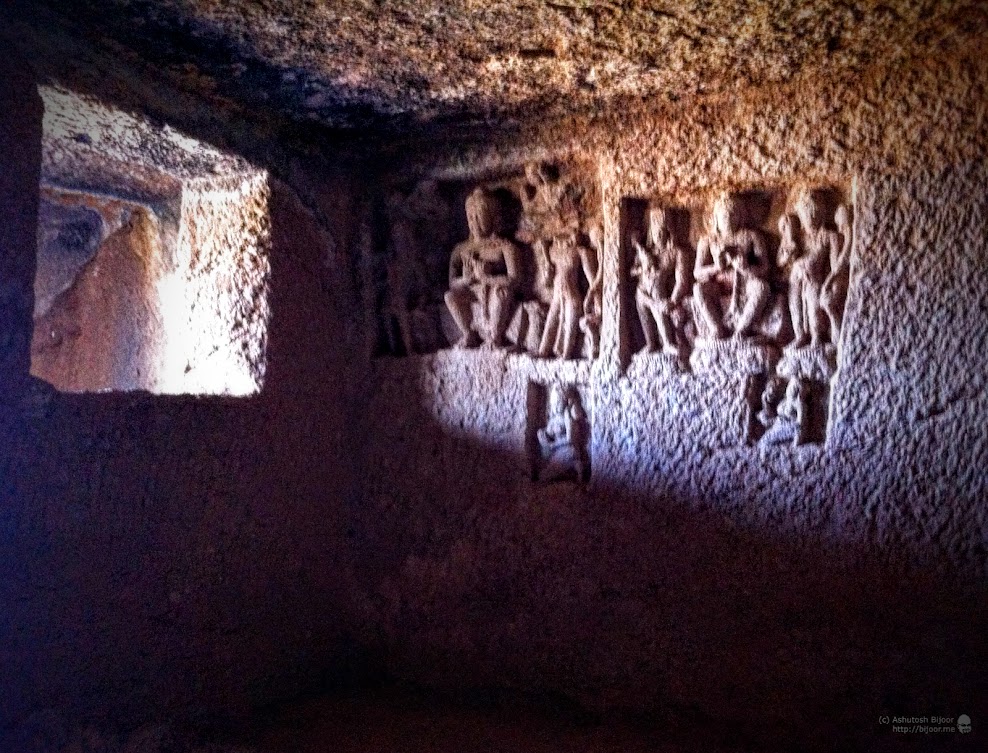 Next we climbed up the hill above the first level of caves. We first saw an unidentified cave that had a windows that highlighted an interesting set of carved panels 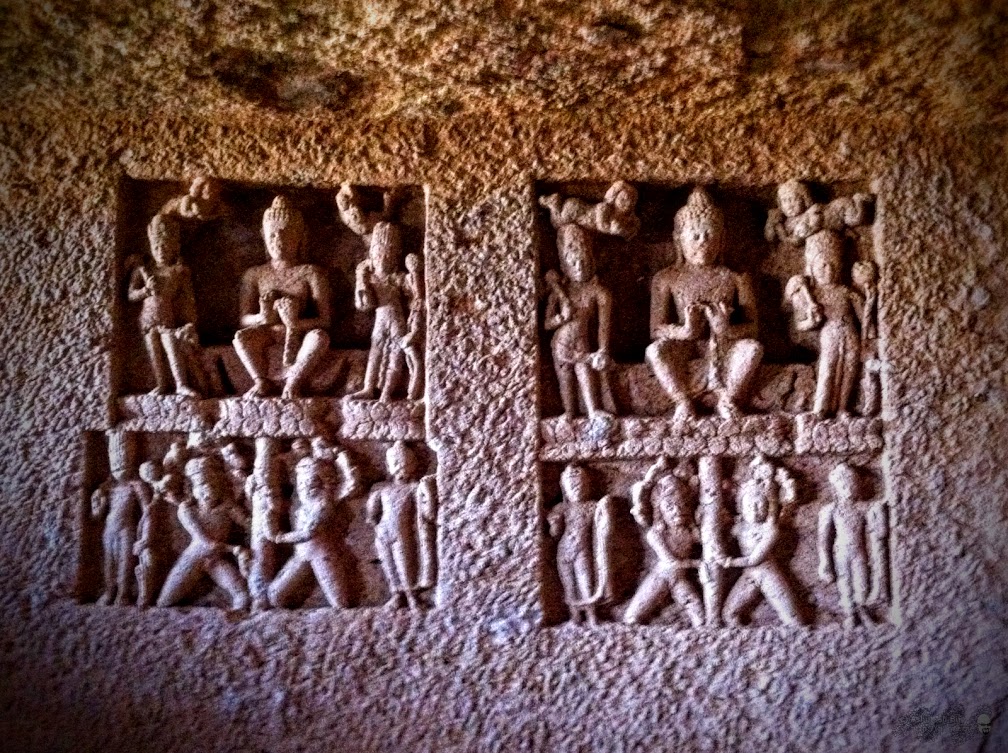 This set of panels seem to have identical panels on the left and right, though they seemed to have been carved by different artists 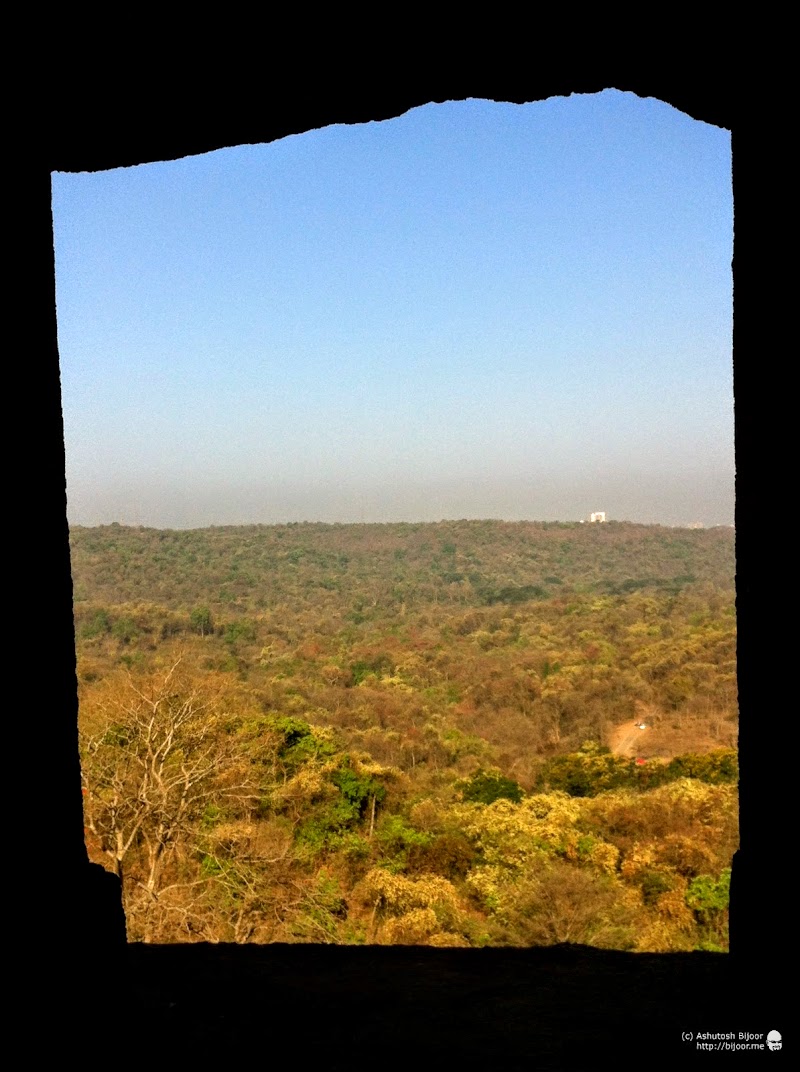 The view from the entrance to cave no 4 of the National Park extending to the horizon is really heartening to see. We are so lucky to still have this green lung in the middle of a busy city like Mumbai 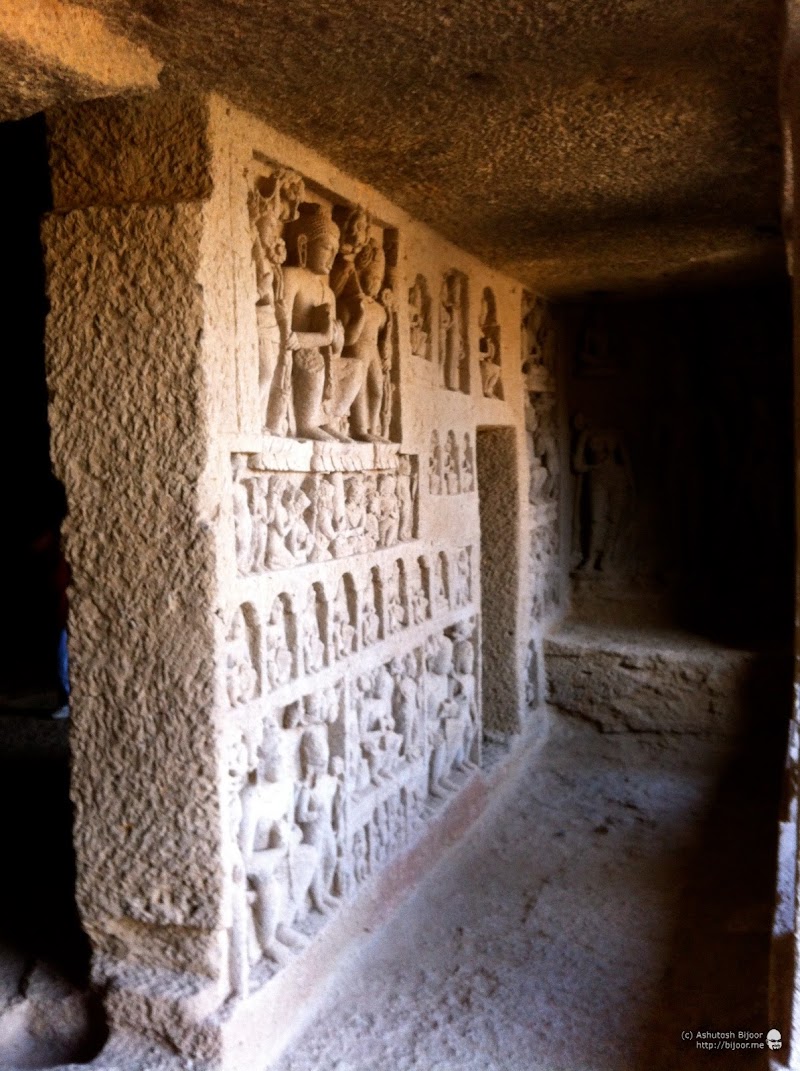 The next cave was number 90. Cave 90 is famed due to the oldest preserved mandala shaped in early 6th century AD. 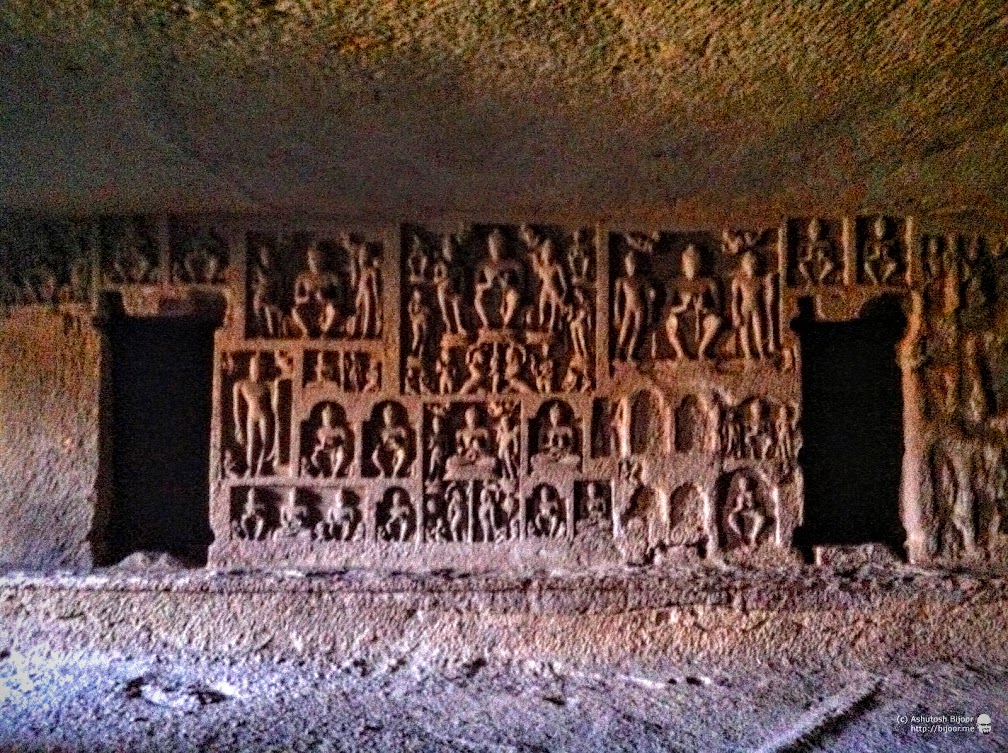 Inside the caves are carvings and inscriptions. The inscriptions are written in the Pahlavi language. They have apparently been left by Persian travellers who visited Kanheri. One inscription is historically significant as it refers to the marriage of the Satavahana ruler Vashishtiputra Satakarni with the daughter of ruler Rudradaman I in a futile attempt at preventing the decline of Satavahana Empire 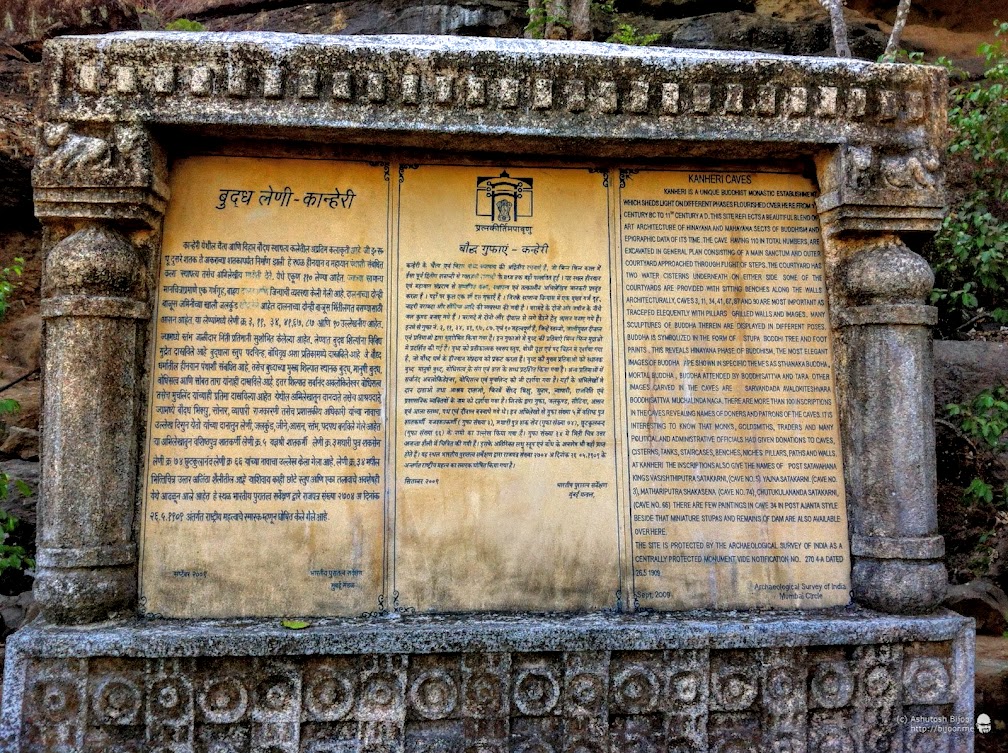 Kanheri is a unique Buddhist monastic establishment which sheds light on different phases flourished over here from 1st century BC to 11th century AD. This site reflects a beautiful blend of art and architecture of the Hinayana and Mahayana sects of Buddhism and epigraphic data of its time. There are a total of 110 caves, excavated in general plan consisting of a main sanctum and outer courtyard approached through a flight of steps. The courtyard has two water cisterns underneath on either side. Some courtyards are provided with sitting benches along the walls. Architecturally, caves 3, 11, 34, 41, 67, 87 and 90 are the most important as decorated eloquantly with pillars, grilled walls and images. Many sculptures of the Buddha therein are displayed in different poses. The Buddha is symbolized in the form of a Stupa, Bodhi Tree and Foot Prints. This reveals the Hinayana phase of Buddhism. The most elegant images of the Buddha are shown in specific themes as Sthanaka Buddha, Mortal Buddha, Buddha attended by Bodhisattva and Tara. Other images carved in the caves are Sarvandada Alokiteshvvara, Bodhisattva Muchalinda Naga. There are more than 100 inscriptions in the caves revealing names of donors and patrons of the caves. It is interesting to know that monks, goldsmiths, traders and administrative officials had given donations to caves, cisterns, tanks, staircases, benches, niches, pillars, paths and walls. At Kanheri the inscriptions also give the names of post Satavahana kings Vasishthiputra Satakarni (Cave no 5), Yajna Satakarni (cave no 3), Mathariputra Shakasena (Cave no 74), Chutukulananda Satakarni (Cave no 66). There are few paintings in cave 34 in post Ajanta style. Besides that miniature Stupas and remains of a dam are also available here 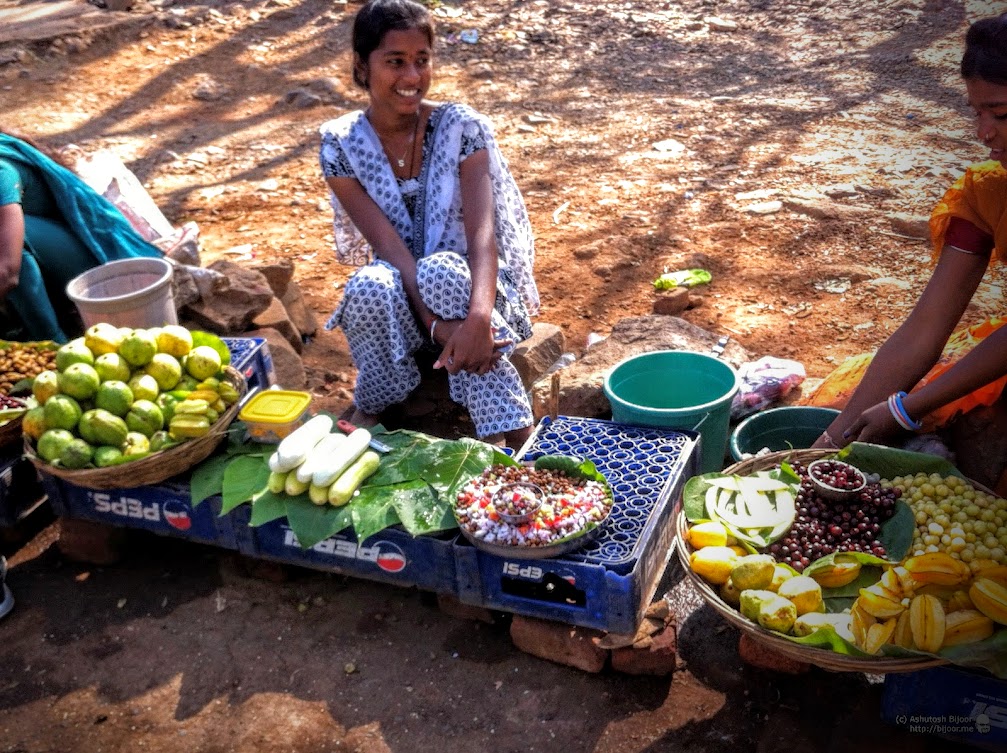 After going through all the caves, we got back to where our cycles were parked, and enjoyed some of the interesting fruits and cucumbers being sold by these ladies

The tour was not very long – 50 km end to end, but the caves were worth the visit. Must do this again in the monsoon, when the entire forest comes alive with a bright green!

See the video clip of the ride: