Located on the Karanja peninsula across the Dharamtar creek to the east of the Mumbai, Uran is actually quite an odd place – a small fishing village but also hosting Asia’s first power plant run on gas by ONGC and neighbor to the largest container port in India – JNPT or Nhava Sheva.

But there is another attraction in Uran that is not quite known – on a hill top near ONGC lies Dronagiri Hill Fort. We planned to cycle from Andheri to Uran, see the fort and return back the same day – a total distance of about 120 km. I was accompanied by the dynamic young Saurav Singhal better known as Sam K Singh – who added the much needed conversation and humor to the otherwise quiet solo expeditions that I normally undertake.

Though Uran is quite close to Mumbai, it still as the charm of a fishing village with lots of coconut trees and paddy fields. The beaches of Uran are frequented by tourists from nearby towns like Panvel, Navi Mumbai and Mumbai. But the fort itself is not as well known to outsiders 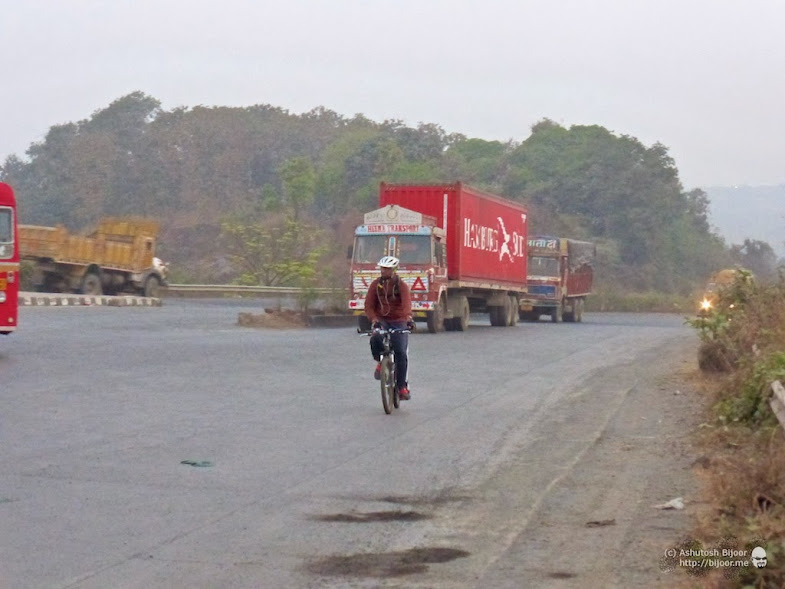 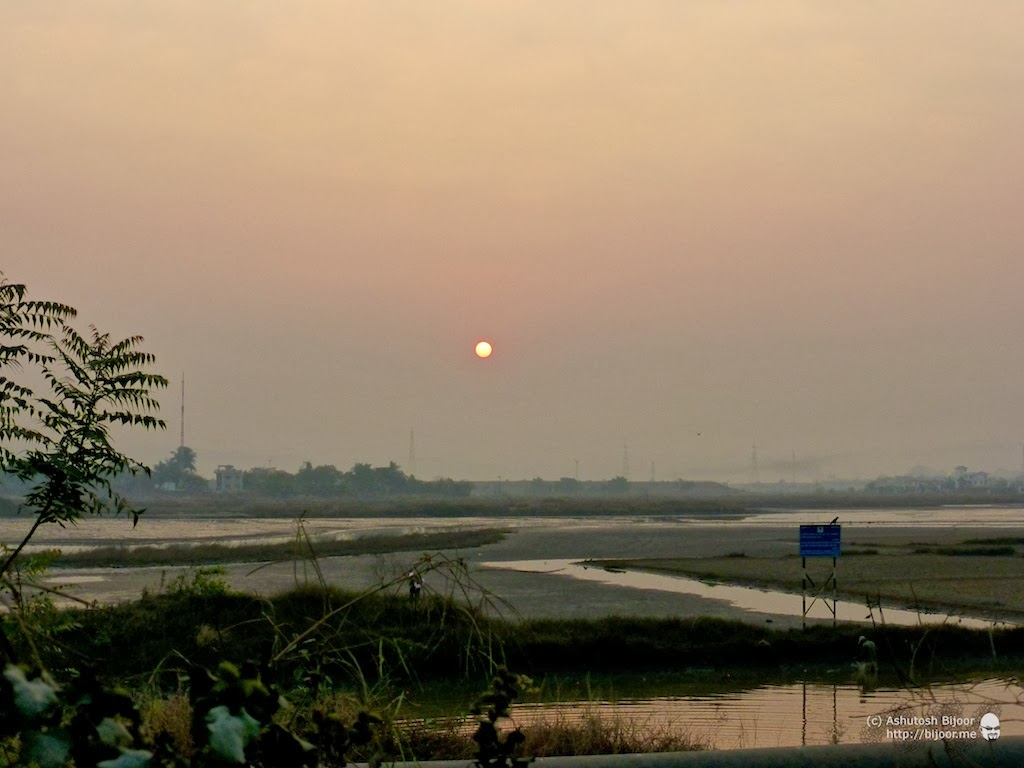 When we reached Ranjanpada, we stopped to watch the sunrise and the migratory water birds that flock to feed in the shallow water pools. Here, we met two others who were watching the birds through binoculars and they said they were doing a Ph.D. in Ornithology from Cornell University

The shallow pools beside the Uran road at Ranjanpada are rich on various species of birds. As many as 50-60 different species of birds come, feed and rest at these spots. Up to four different types of egrets like the cattle, large, medium and western reef can be spotted here. One can also spot spoonbills (seen in this video), Indian pond herons, black crowned night herons, grey herons and purple herons. 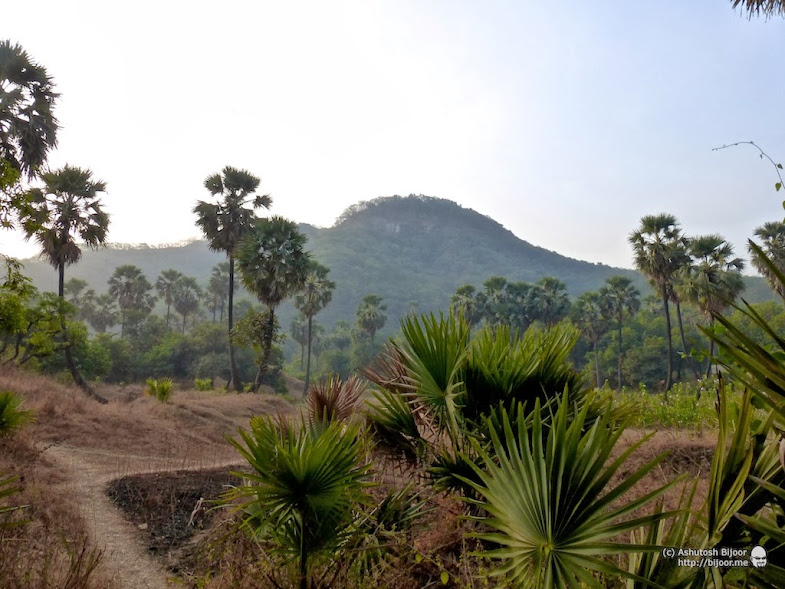 We reached Uran and asked our way to the Dronagiri Hill Fort. A bunch of local youngsters showed us this route that is not usually used by others. It passes through fields of palm trees and mango trees in privately owned orchards 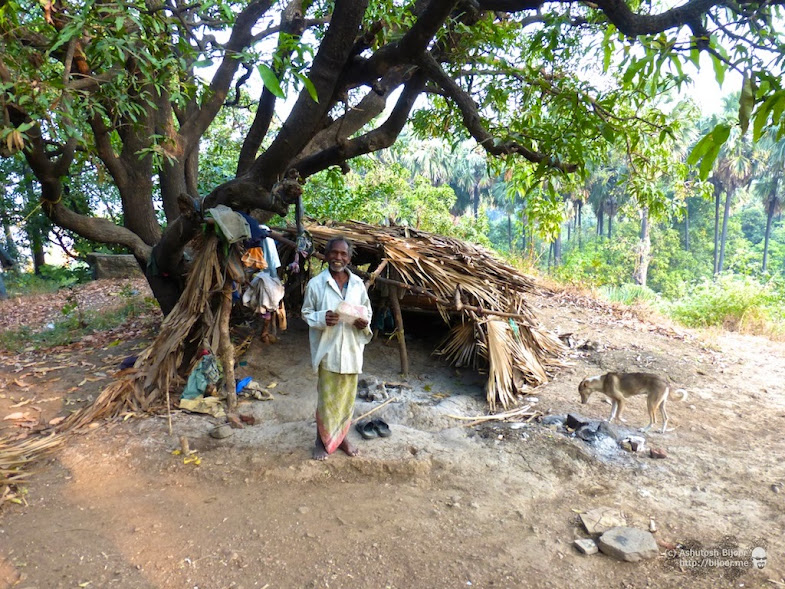 We passed by Dhondu kaka’s hut where he looks after a mango orchard. He kindly allowed us to pass through his orchard towards the hill top We then came across this beautiful path through the forest, and kept following it, not realizing that it was not climbing up the hill but circumnavigating it :) 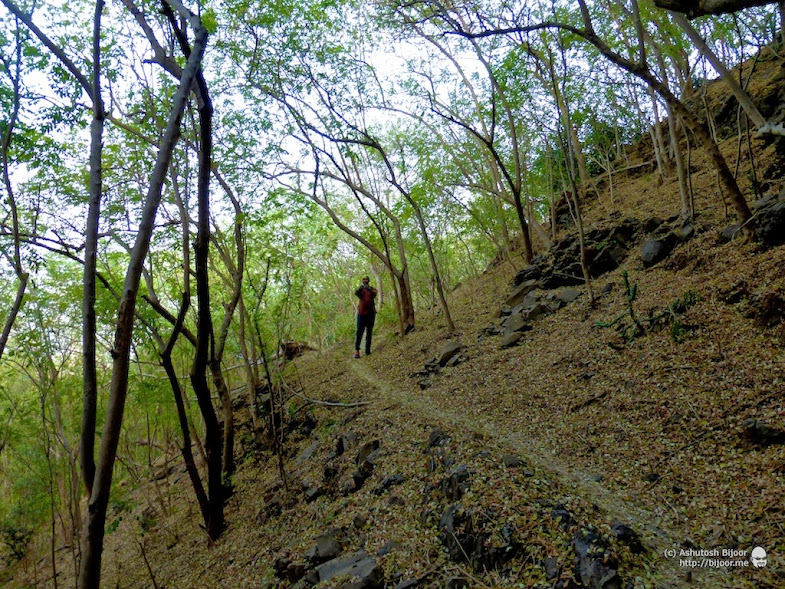 We soon realized that we had lost our way. We were famished and so took a break to eat the wada pav, bhajiya and jalebis that Sam had bought in Uran. We luckily found a local who was passing by and he helped us find the correct route up to the fort 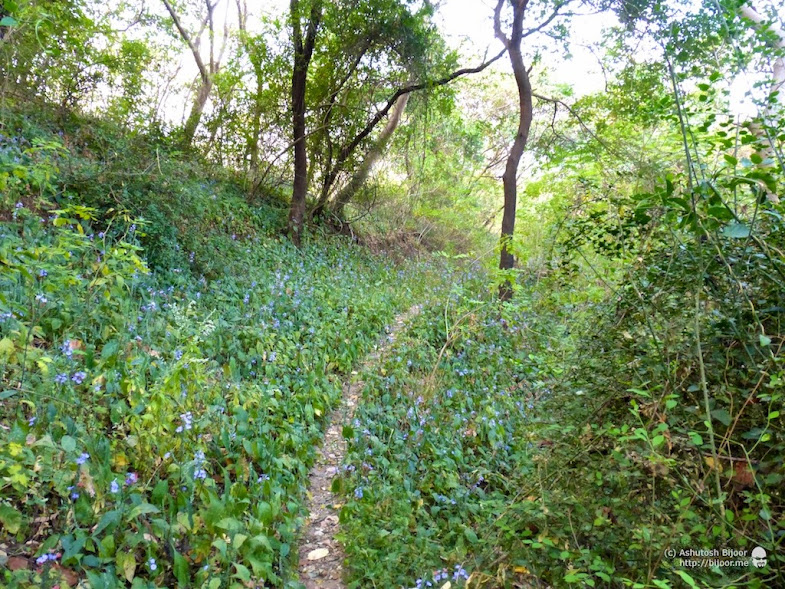 But one bonus we got for having lost our way was the sight of these brightly colored wild flowers that lined the path.
On closer inspection, they were delicately decorated with bright green leaves along the stem, with red colored buds and purple colored flowers as can be seen from the closeup 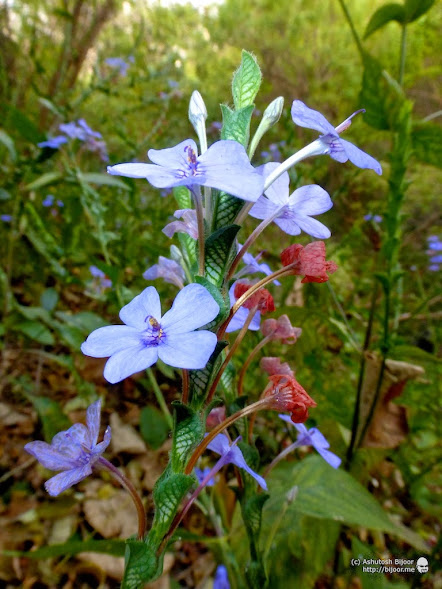 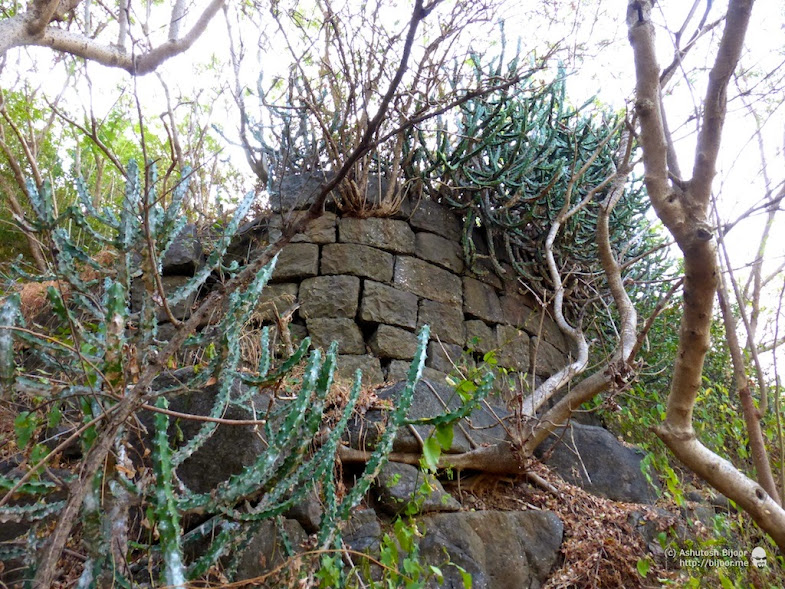 We finally reached the first bastion of the fort after a short but steep climb up the hill. The lone bastion was devoid of any ramparts around and was overgrown with vegetation – clear signs of neglect 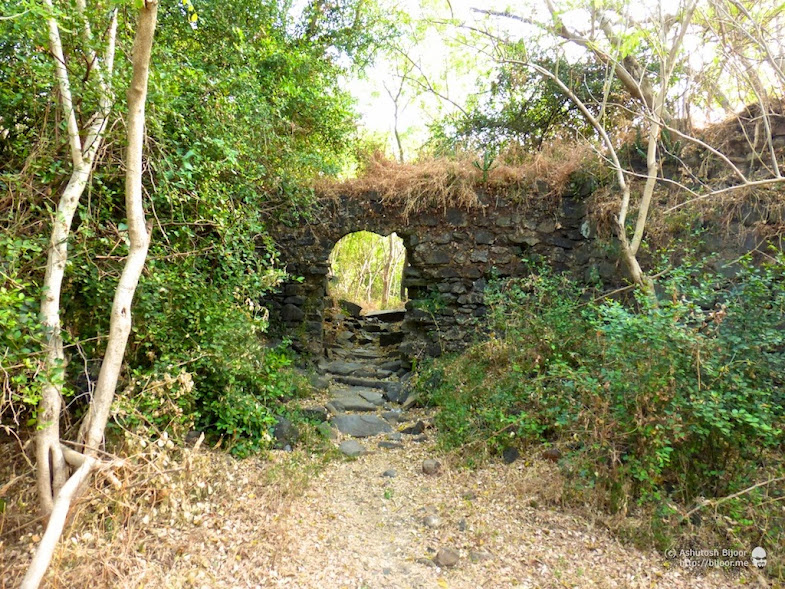 The arched entrance in this picture is the rear entrance of the fort. Karanja, the nearest town was historically associated with the Maurya King Suketuvarman who ruled northern Konkan in the 5th and the 6th century. Hence it can be presumed that the first fortifications in Dronagiri may have been constructed in that era (ref). 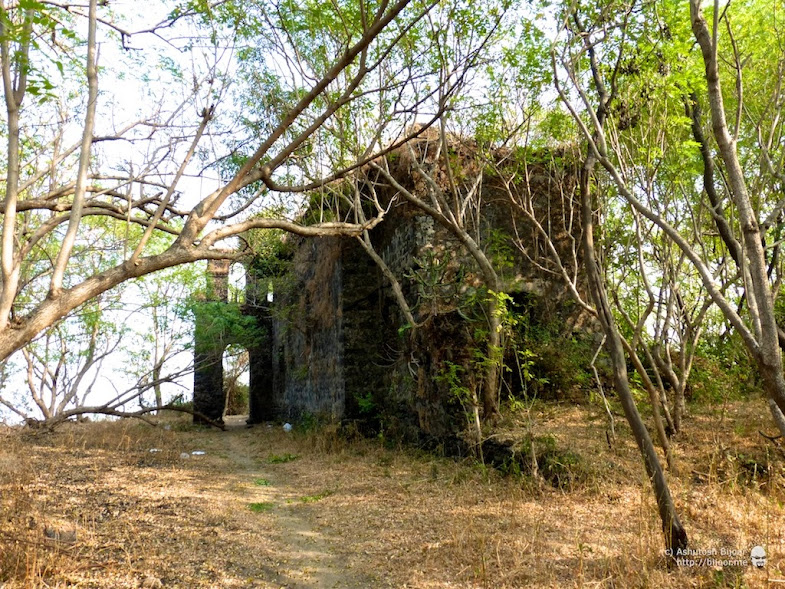 As you enter the fort from the rear entrance you can see the back of the chapel of Our Lady of Penha of Karanja, built by the Portuguese who occupied the Karanja peninsula between 1534 to 1739. In 1739, the successors of Kanhoji Angre conquered the Karanja Peninsula and the fort. Later in 1774 the English occupied the peninsula and installed a lighthouse over the Portuguese fort’s structures (ref) 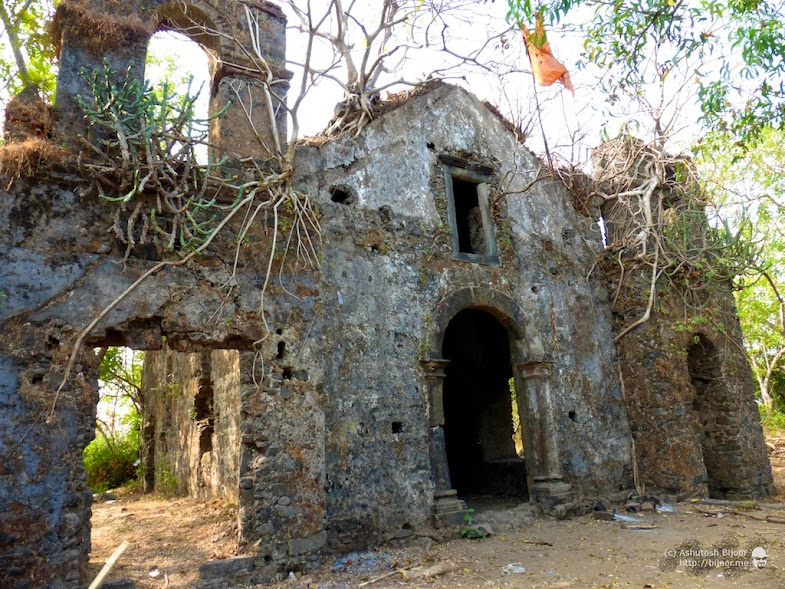 This is the front view of the chapel with a rather sober façade and the two bell towers on either side. During the Portuguese era, the captain of the cassabé of Karanja, pertaining to the Vasai district of the Província do Norte, lived inside the fort (ref) 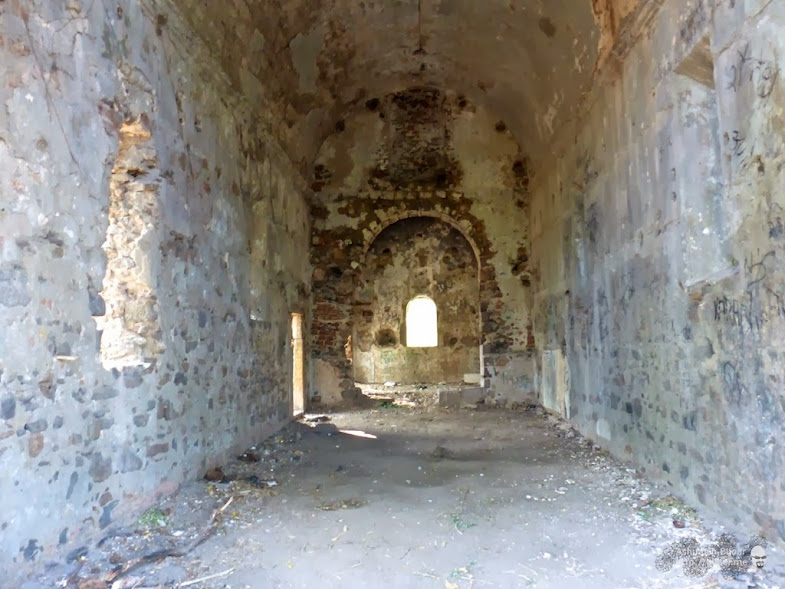 The interior is vaulted throughout, in both the altar area and the nave, which demonstrates the importance of this religious structure. Descriptions from that time indicate that the chapel was lined inside with ex votos portraying miracles attributed to the image of Our Lady (ref) 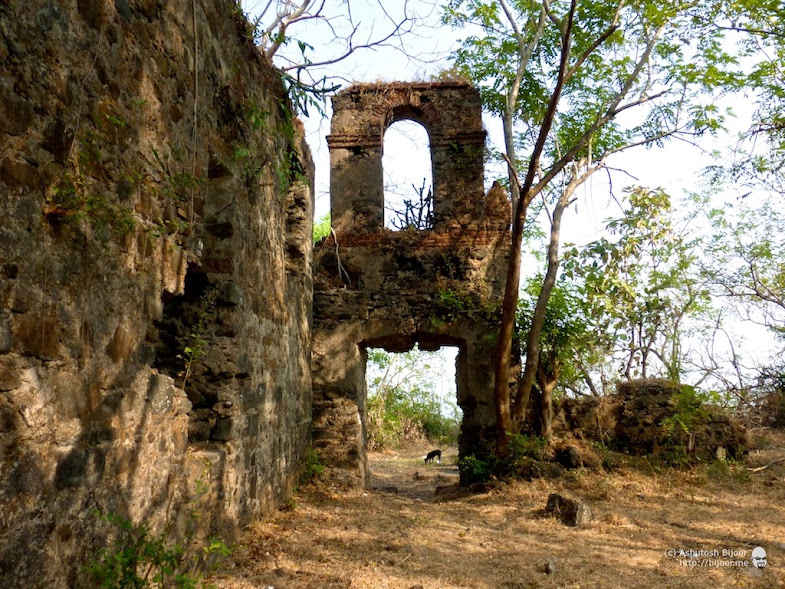 On the left of the chapel behind the bell tower are vestiges of annexes to the chapel. It was sad to see how there was garbage – plastic plates and cups – thrown around by earlier visitors 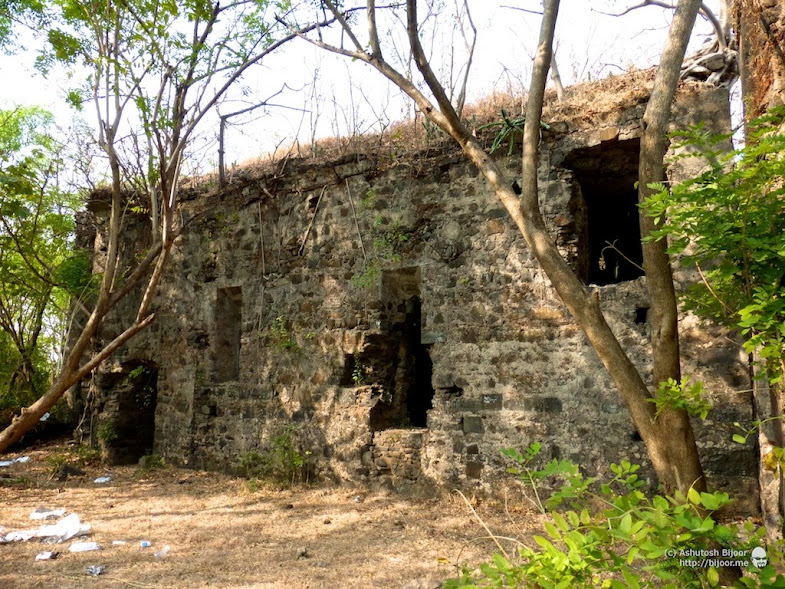 I and Sam spent some time in collecting the garbage and piling it in one corner. 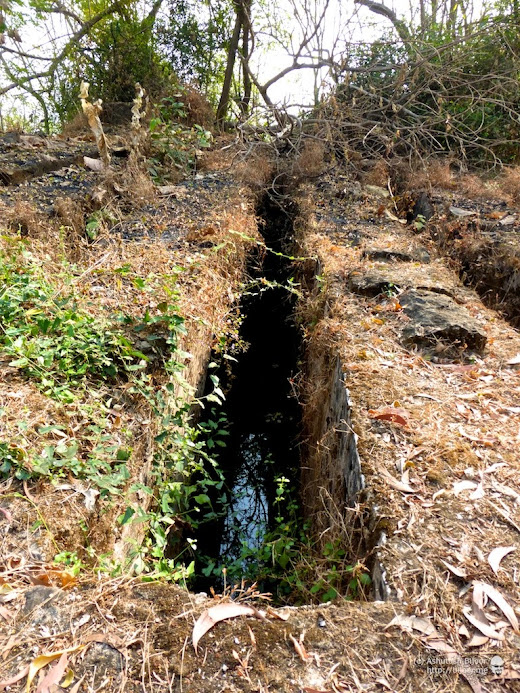 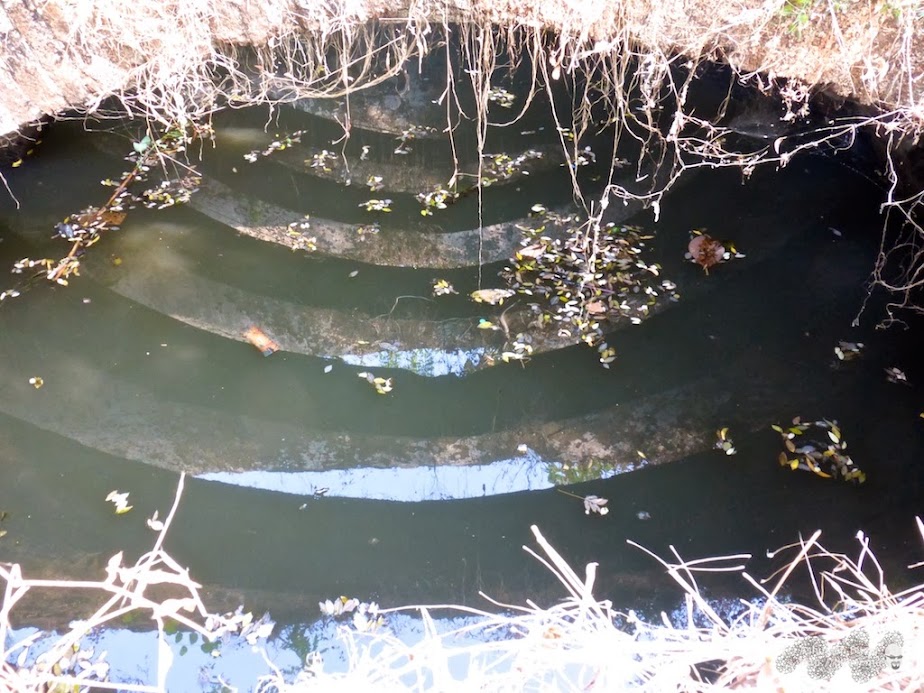 In front of the left bell tower is a water cistern covered by arched stone grill, built in 1686 on the orders of Viceroy Francisco de Távora. The reflection of the arches can be seen in the water 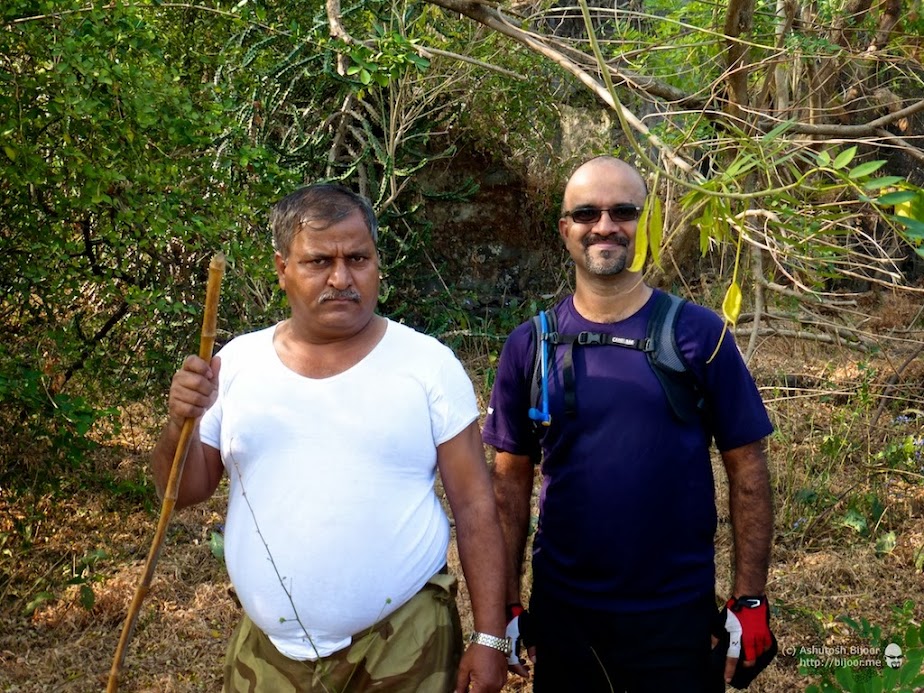 We were soon joined by Mr. Pawar, CSF security guard who was stationed there for protection of the ONGC power plant. He was kind enough to guide us through the fort to some of the other features 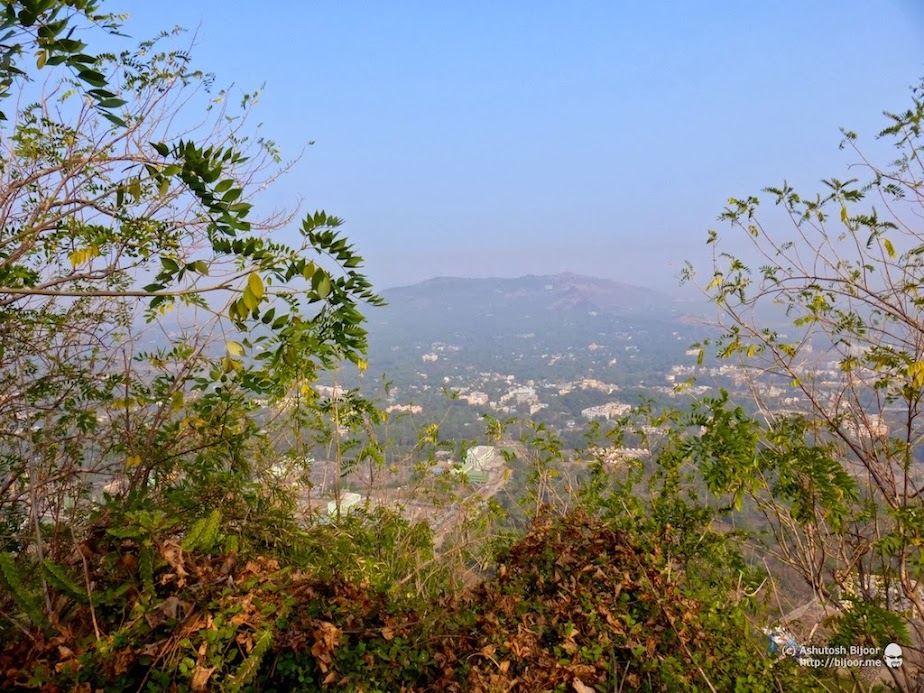 Through the gaps in the bushes in front of the chapel, we caught glimpse of Uran town – proving why this fort was so critical in its protection 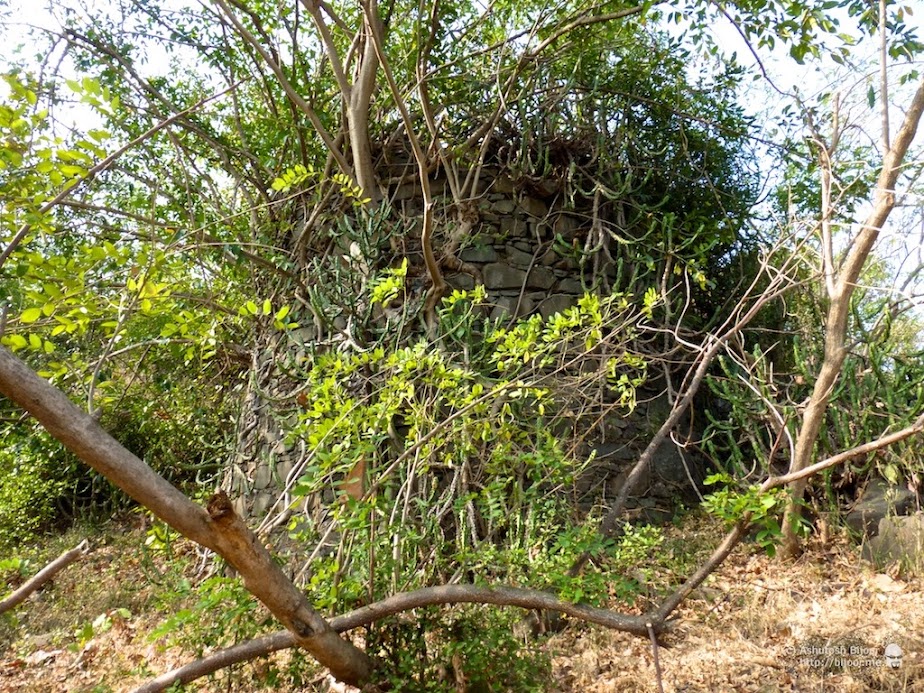 Another bastion of the fort that was overgrown with vegetation. A 1728 report indicated that six artillery pieces were located in the defence structure, garrisoned by 50 soldiers (ref) 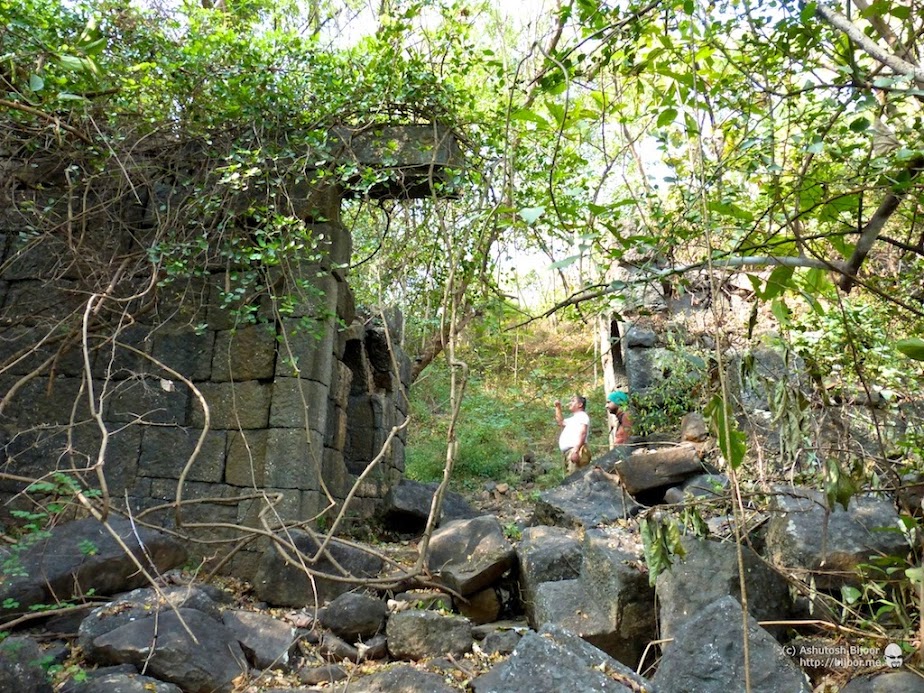 We next visited the main entrance to the fort located on the north side of Dronagiri hill at a slight distance away on the left of the chapel. This arched entrance was standing till recent times but gave way to neglect and age. Before it fell, there were narrow winding stairs leading up to this entrance, starting from a location about a kilometre south of Uran town, that is now closed down 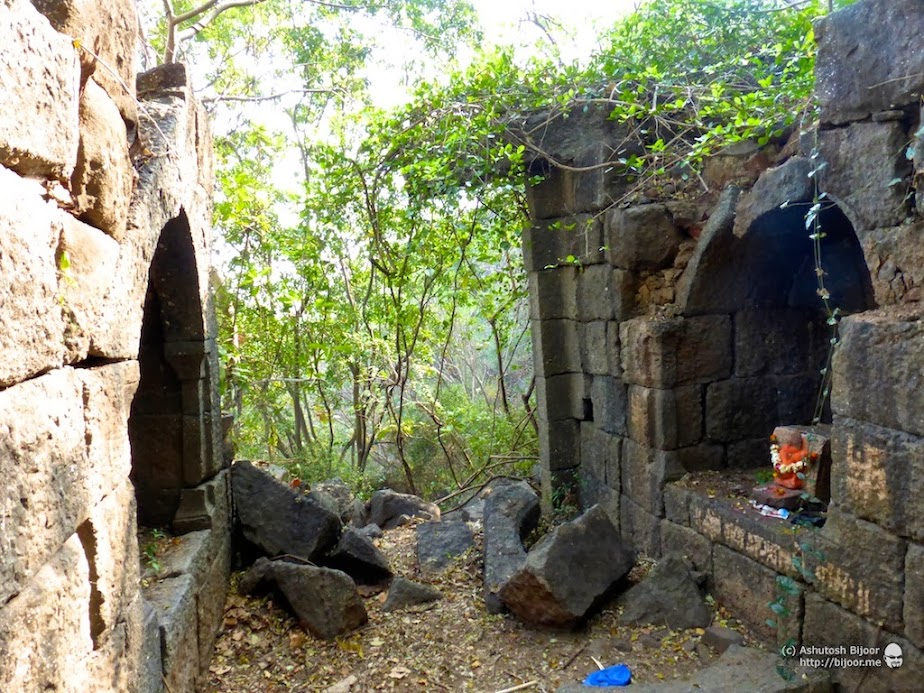 Just inside the entrance is a portico with two arched chambers on either side. The one on the right holds an idol of Lord Ganesh. 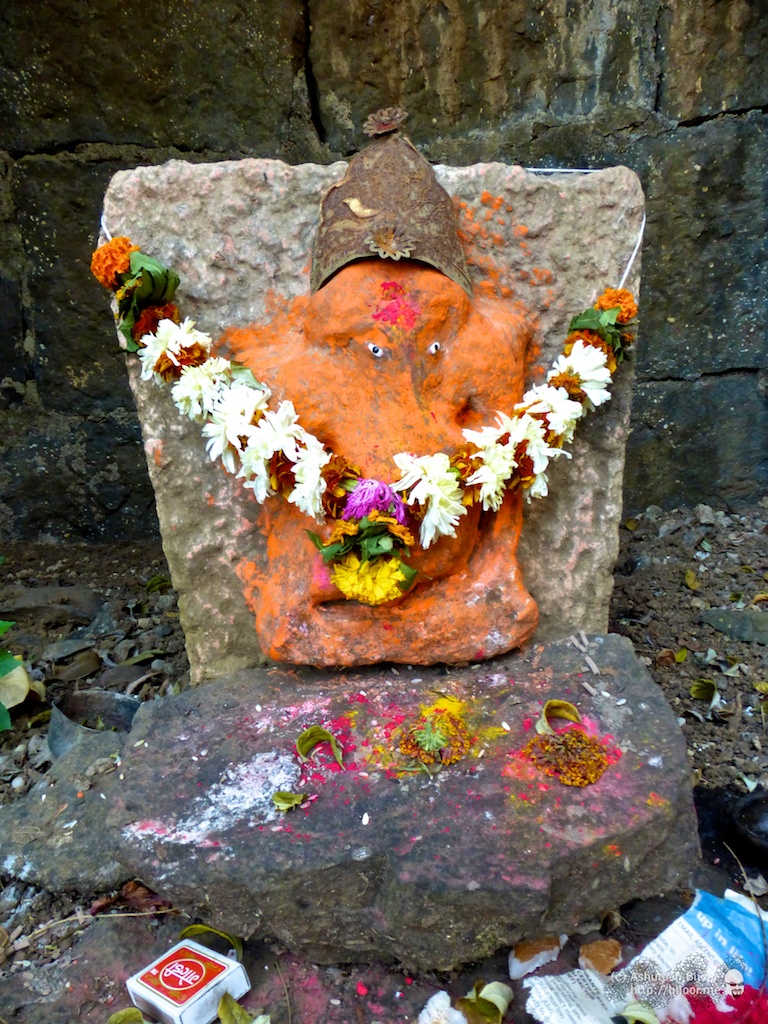 Mr. Pawar clarified that this idol was actually on the keystone of the arched entrance, and was kept in this chamber after the arch collapsed 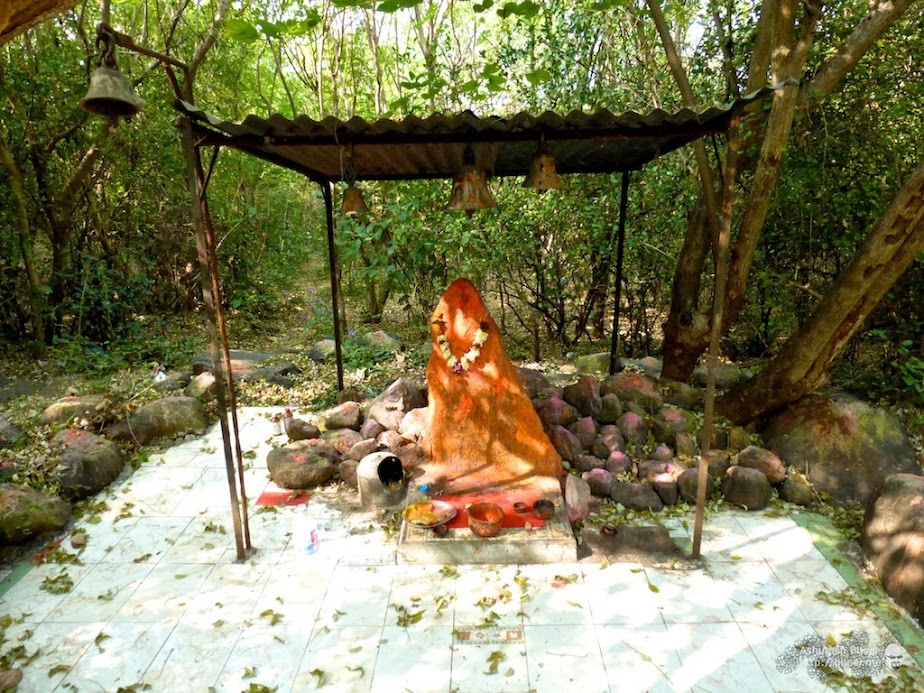 The next destination was the Vetal temple located on top of the hill, accessible via a path that leads up from the south of the fort. Vetal is the god of the roaring storm, and is usually portrayed in accordance with the element he represents as a fierce, destructive deity. Vetal shares many features with the Vedic God Rudra, and both Shiva and Rudra are viewed as the same personality in a number of Hindu traditions (ref). 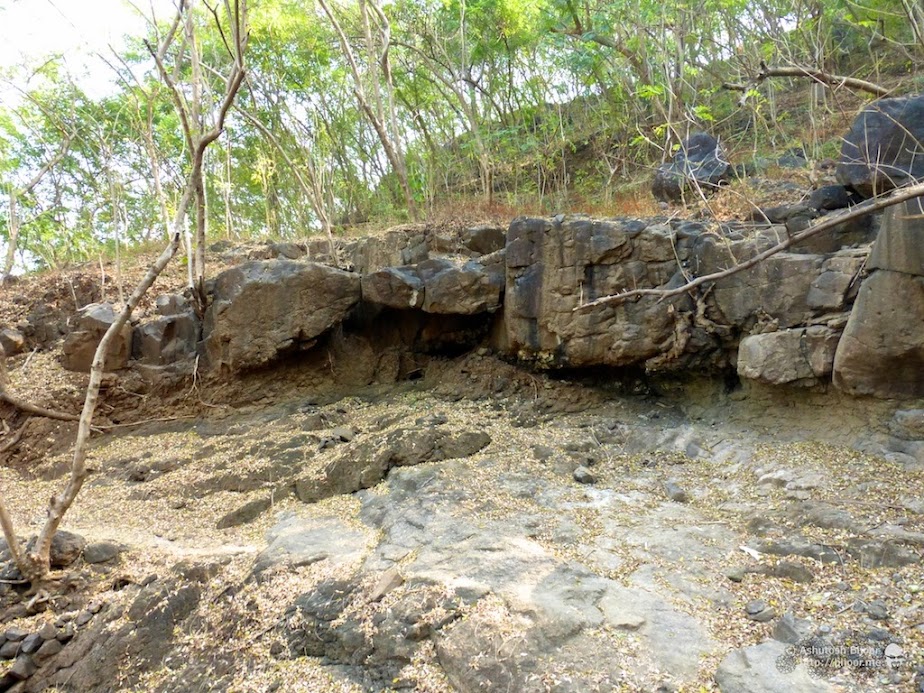 After a visit to the Vetal temple, we bid goodbye to Mr. Pawar – Sam found out while chatting with him that he was grieving the loss of his teenage son. On the way down we saw this rock face with a cave like structure 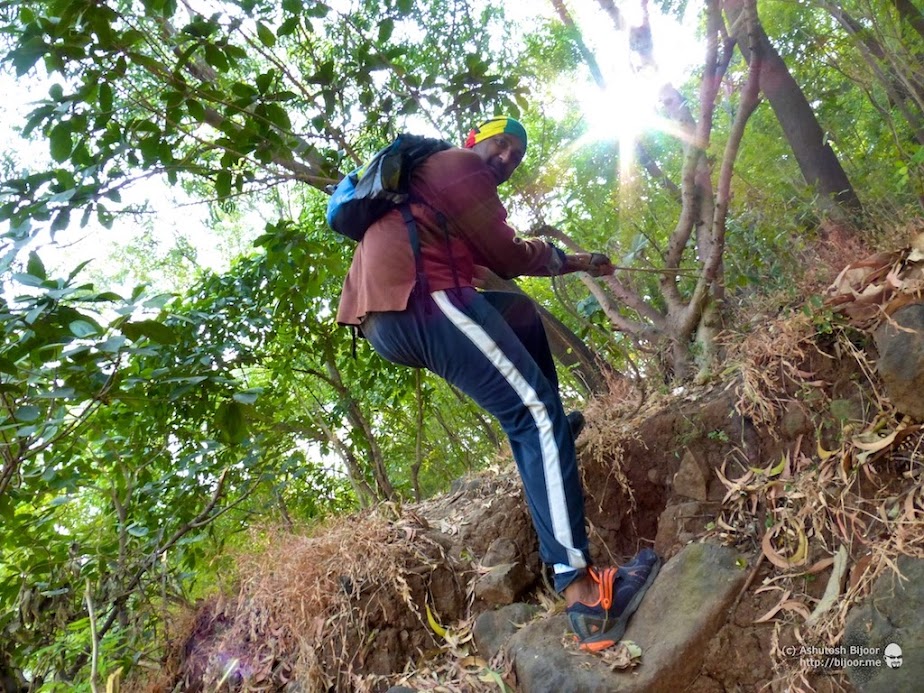 We found that the normal route is quite straighforward and leads to the S.T. bus stand in the town. However, the route that we had followed and where our cycles were parked required us to climb down the hill mid way. Luckily we found this rope dangling from a tree and used it for a short rappel down a steep slope 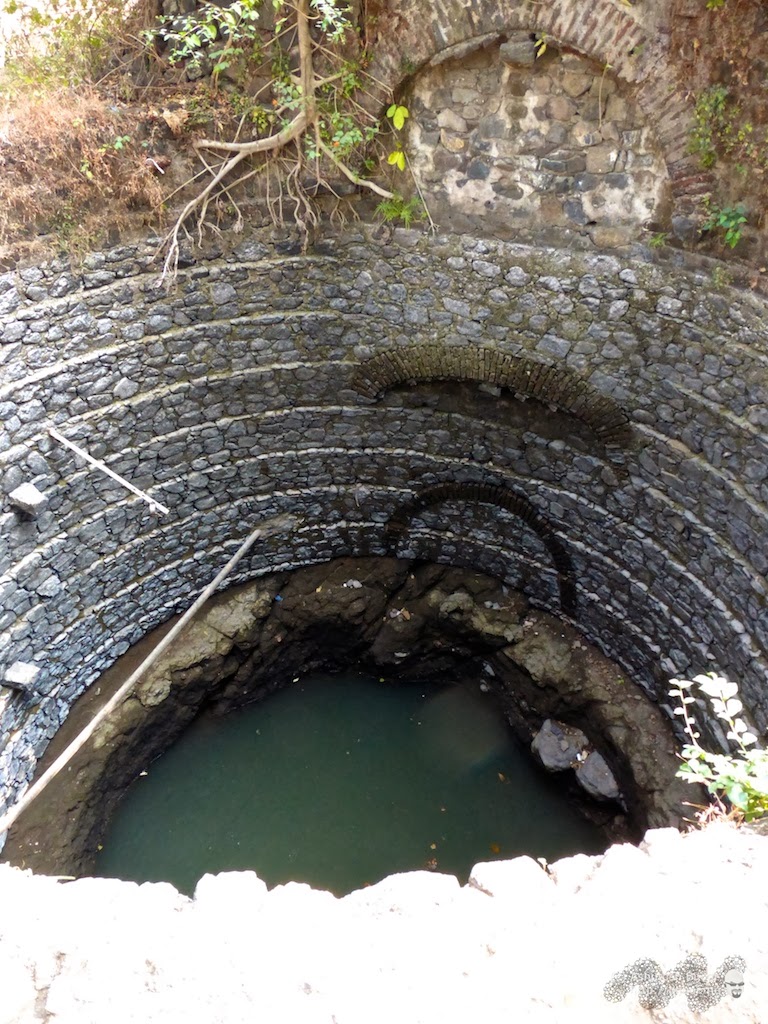 Further downhill, we came across this huge well lined with neatly arranged stone walls. The arched structure above the well indicated that this could have been an old structure too, possibly restored partially for use of the well 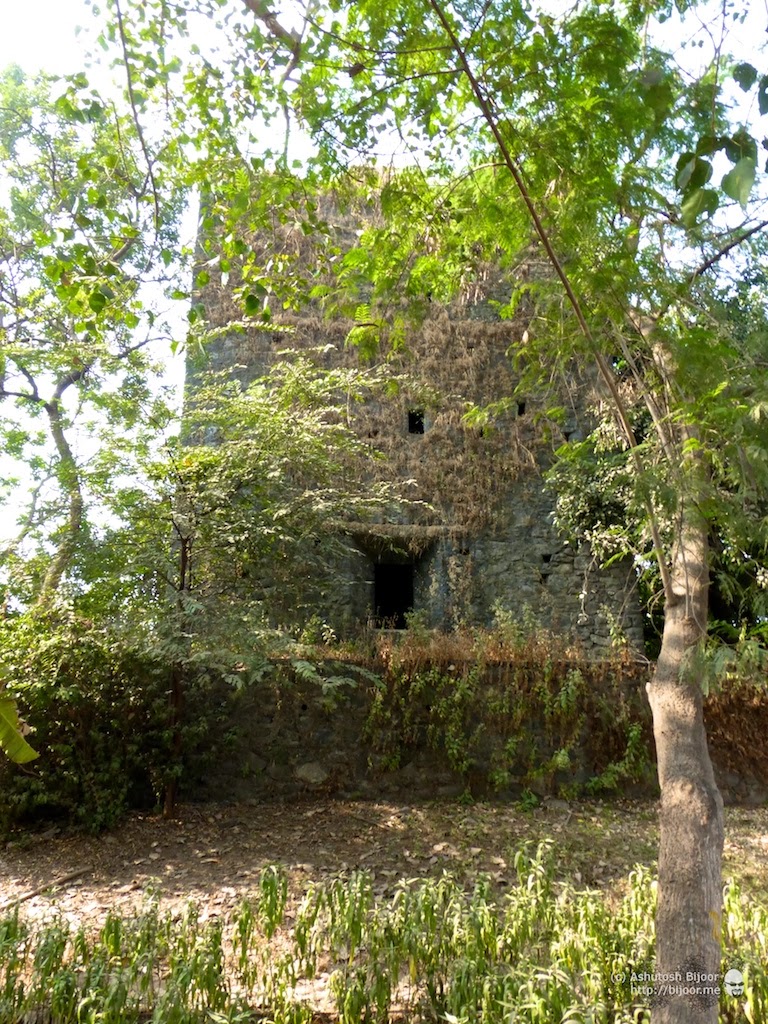 It was already noon by the time we headed back from Uran to Mumbai taking the same route. Luckily the breeze was quite cool and prevented us from feeling the heat of the sun. We stopped briefly at Belapur to admire the watch tower of the Belapur fort at the traffic junction between Uran road and Palm beach road (read more). This is where we parted ways and I headed off to return to Andheri via Airoli

At Airoli, I stopped to admire the flamingos. Every year in winter, lesser flamingos migrate from the Rann of Kutch in Rajasthan to the warmer weather in Mumbai and feed on the mud flats. They are mostly sighted at Sewri, but in the last few years they are also seen at Airoli from the bridge.

The round trip distance from Andheri to Uran is just about 120 kilometers, and is perfect for a day’s ride. I was back home for a late lunch at 3:30 pm and a much needed rest after a great ride!