Barvi Dam is located about 90 km from Mumbai, and just over 66 km from Andheri – perfect for a weekend ride to explore what looked like a huge lake on the map. It is located on the road from Badlapur to Murbad. The reason for choosing this destination was a combination of the distance and the location considering it looked all green around the lake on the map.

But what I discovered when I reached there was breathtaking – and I discovered after doing some more research after I got back, that it is indeed a bird watching paradise!

The route I took was via JVLR, EEH, Airoli, Thane Belapur Road, Shilphata and then on to Pipeline Road that leads to Badlapur, and finally to Barvi Dam on the way to Murbad. Once we turn off from Thane Belapur road towards Shilphata, there is a nice gradual climb, and then a nice downhill on the other side of Parsik Hills, and then the pipeline road is a gentle climb up to Ambernath where we cross the extension of the Malanggad hill range, and then down the other side to Badlapur, where a single lane road with a good surface over rolling hills leads up to Barvi Dam. 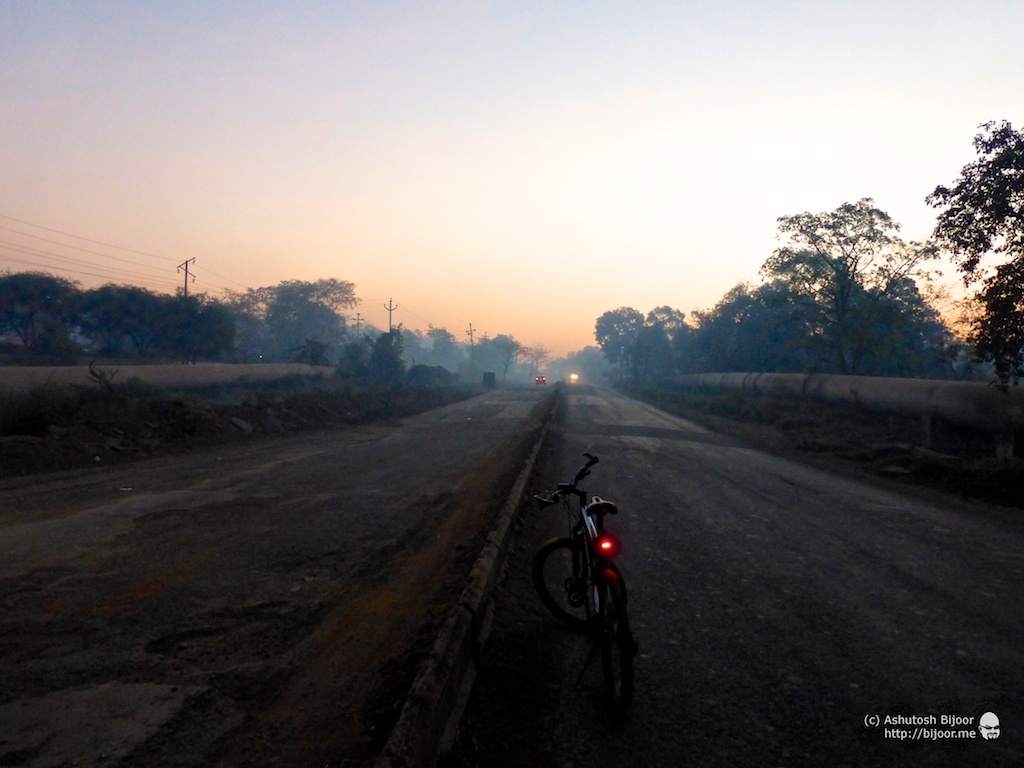 On the pipeline road going from Shilphata to Ambernath, with fog all around, and the colors of dawn brightening up the sky… no picture can really capture the magic.. you just have to be there! 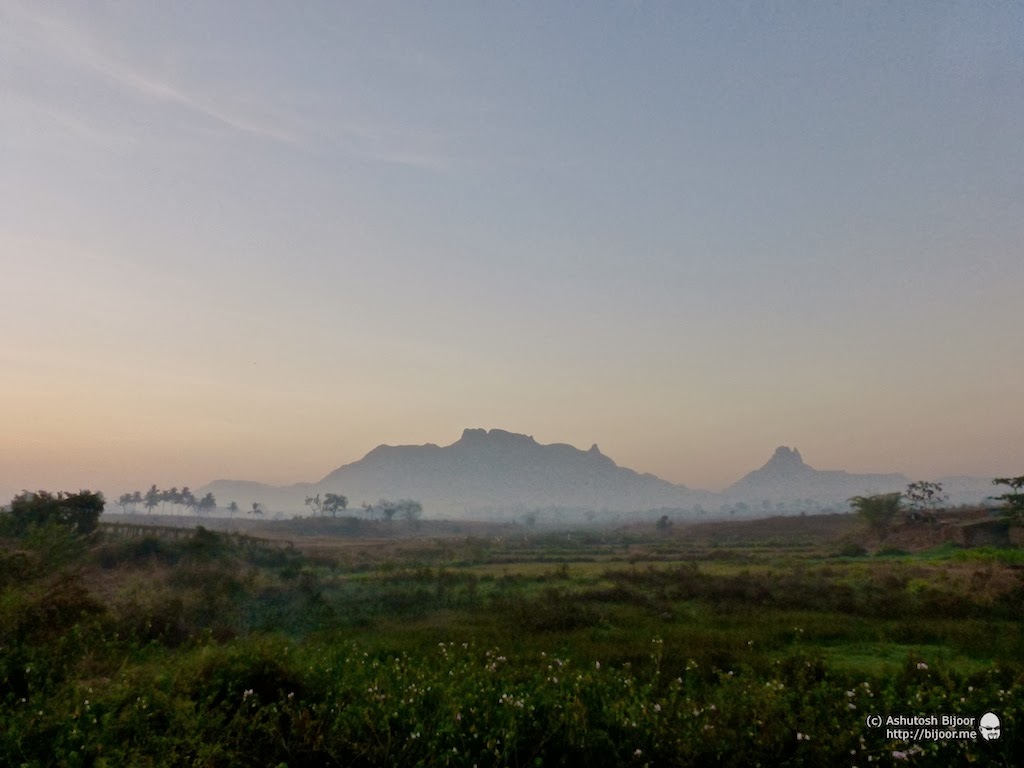 Every time I ride on this road, I’m mesmerized by the shapely Malanggad mountain silhouetted against the dawn. This is my third ride along this route – first Ambernath Shiv Temple, then Malanggad and now Barvi Dam. 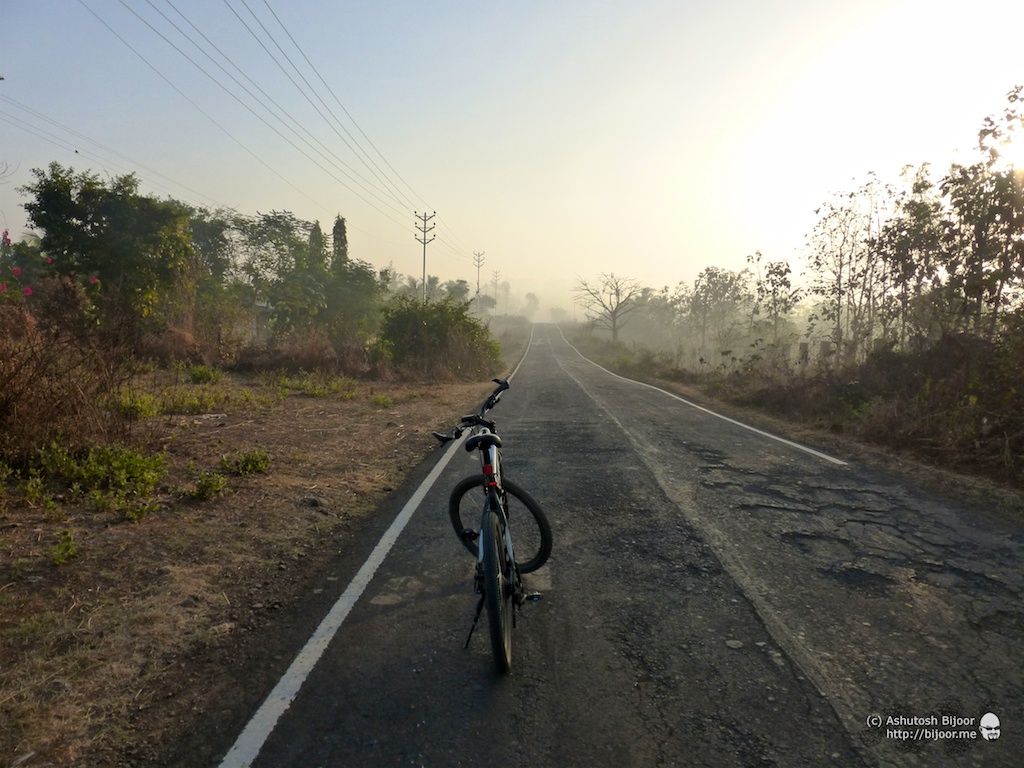 After you pass Badlapur, a single lane road leads to Murbad, that travels through open countryside with small villages. The surface was reasonably good, and the terrain was hilly, with lots of small up and down climbs, and the highest point a few kilometers before you hit the dam 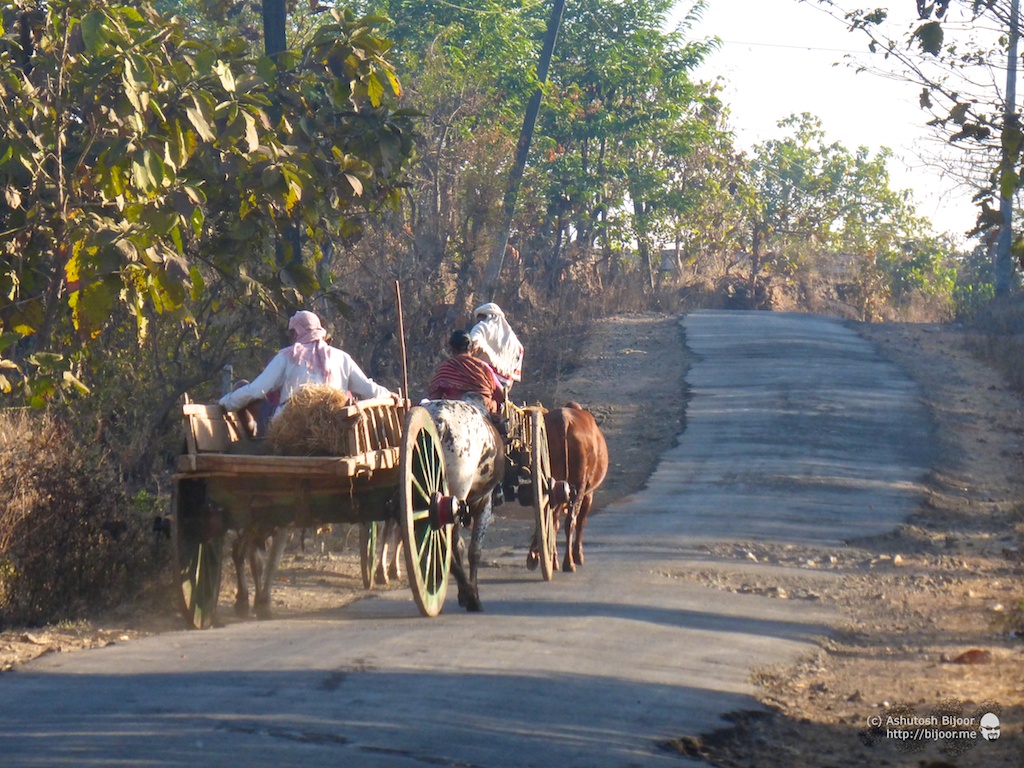 Luckily the traffic on this route was also minimal, with the occasional bullock carts ambling along and mostly two wheelers… great route for cycling! 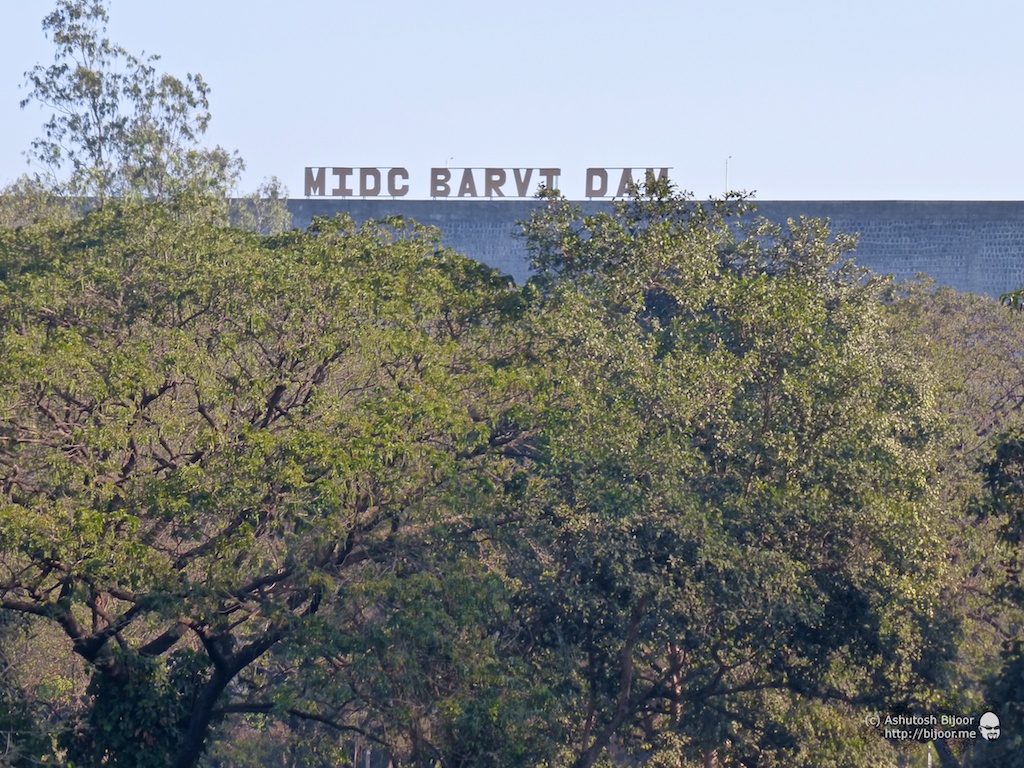 The final descent to the dam after a tough climb was a welcome break. Barvi Lake is a reservoir created by building the Barvi Dam on the Kalyanthane river. It’s height has been raised four times since 1979 when it was first built, displacing over 8,000 villagers from the catchment area that now extends to over 3000 acres 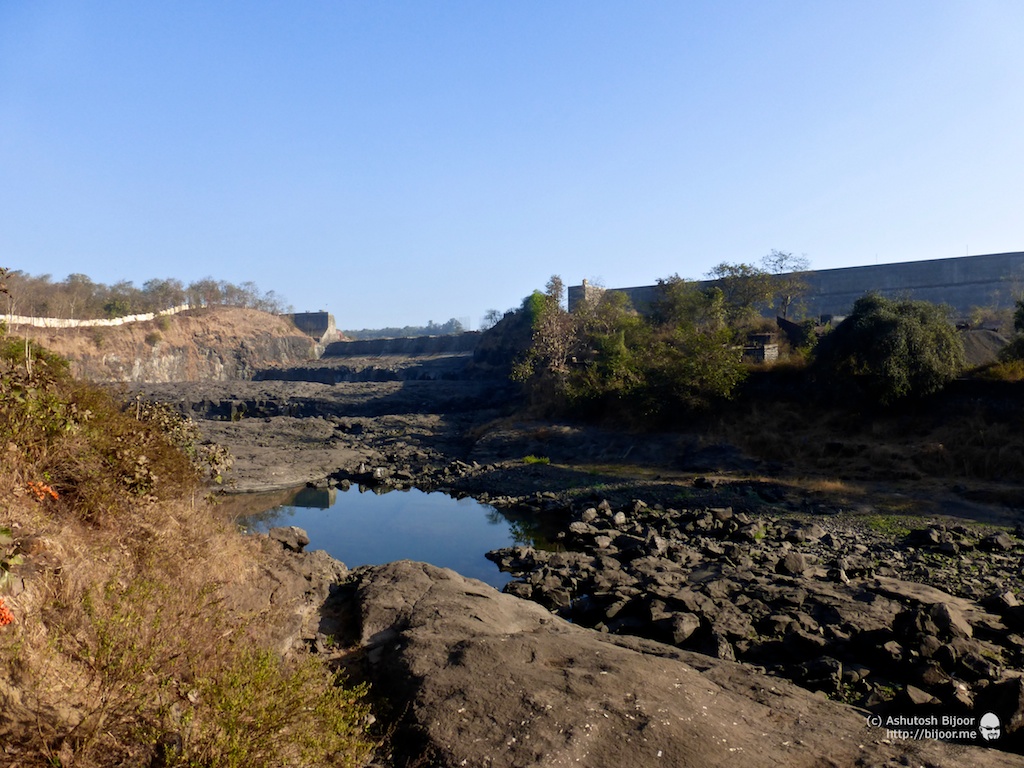 The sluice gates are now dry, but in the monsoon this is flowing with abundant water and a regular spot for tourists to enjoy an artificial waterfall 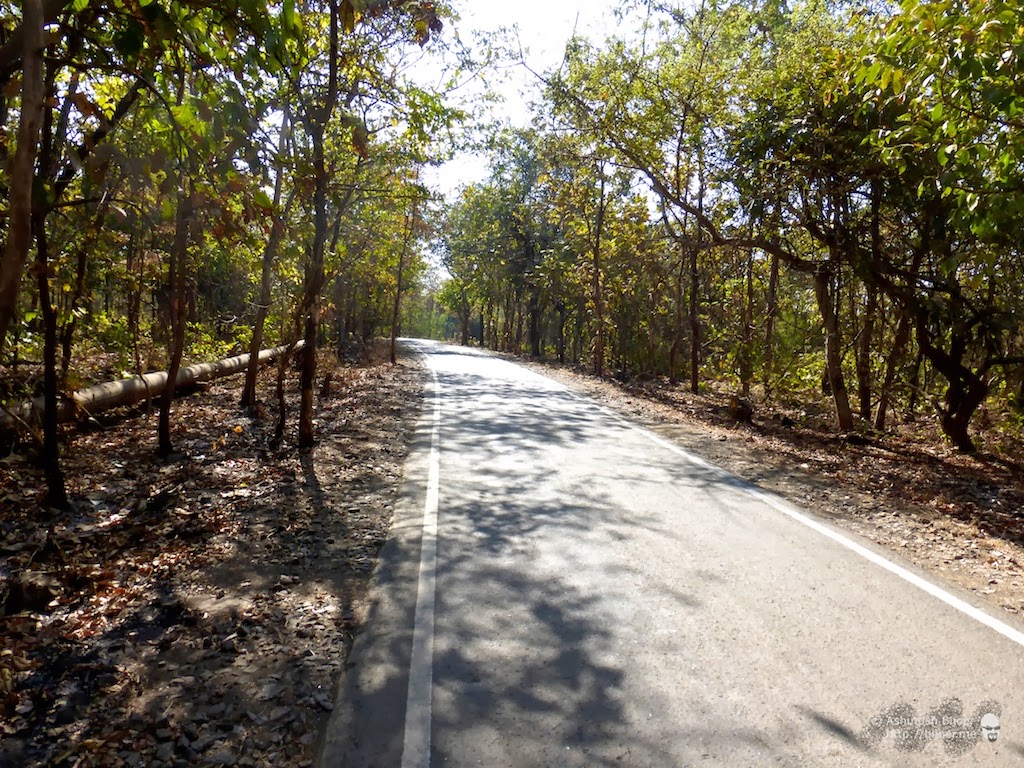 After you pass the dam, you enter a thickly wooded area and you can catch a glimpse of the lake water through the trees on your right. I could not find any clear path leading to the water, but met a bunch of bird watchers who had parked their two wheelers and stealthily making their way through the forest. They told me that it was a short hike down to the water front 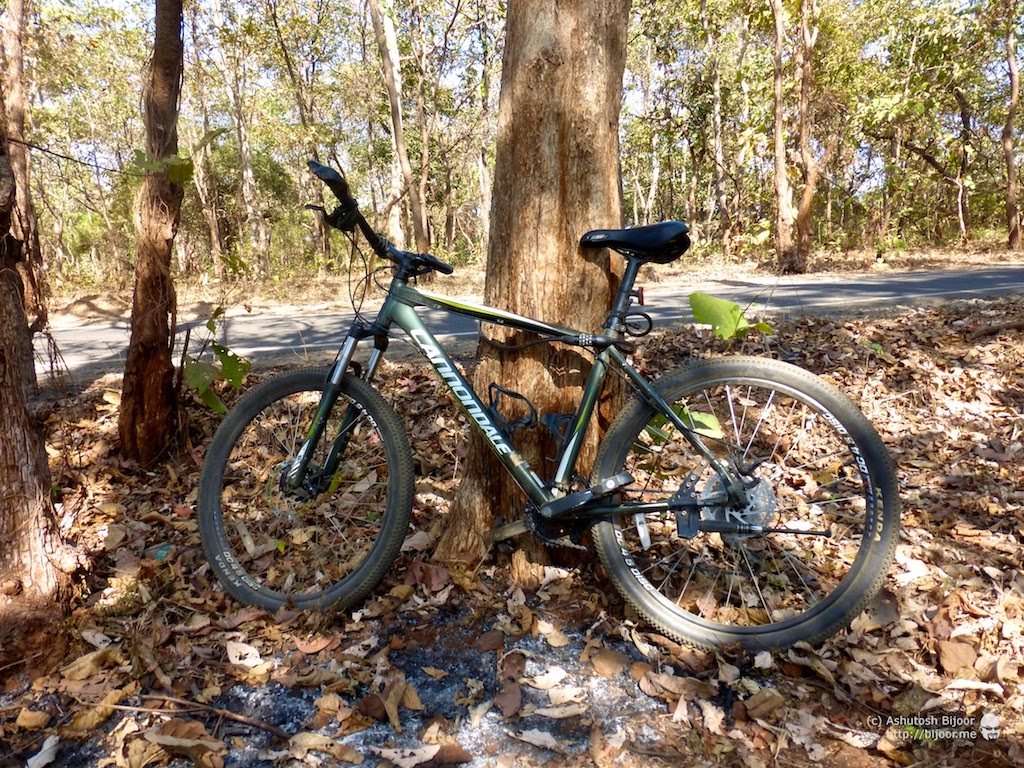 I locked my cycle to a tree trunk on the side of the road, and its green color blended wonderfully with the forest so it was practically invisible to passersby. I then made my way through the forest in the direction of the water. Make sure you find a spot where the slope is gentle and avoid sharp drops as the ground is covered with dry leaves and not clearly visible 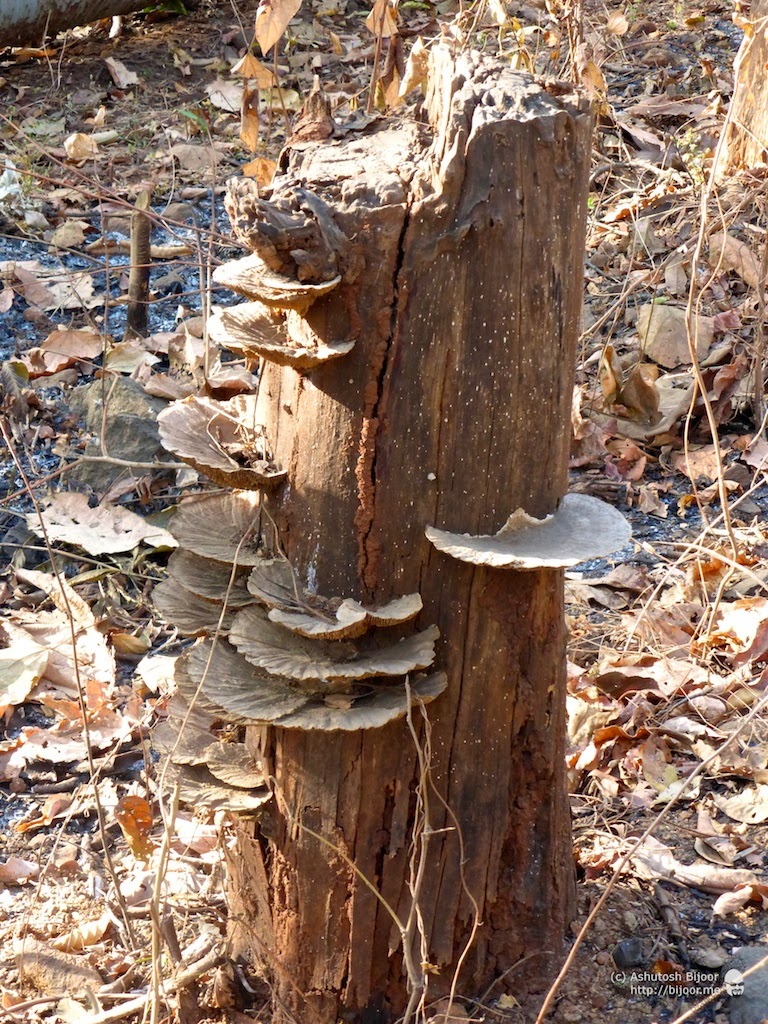 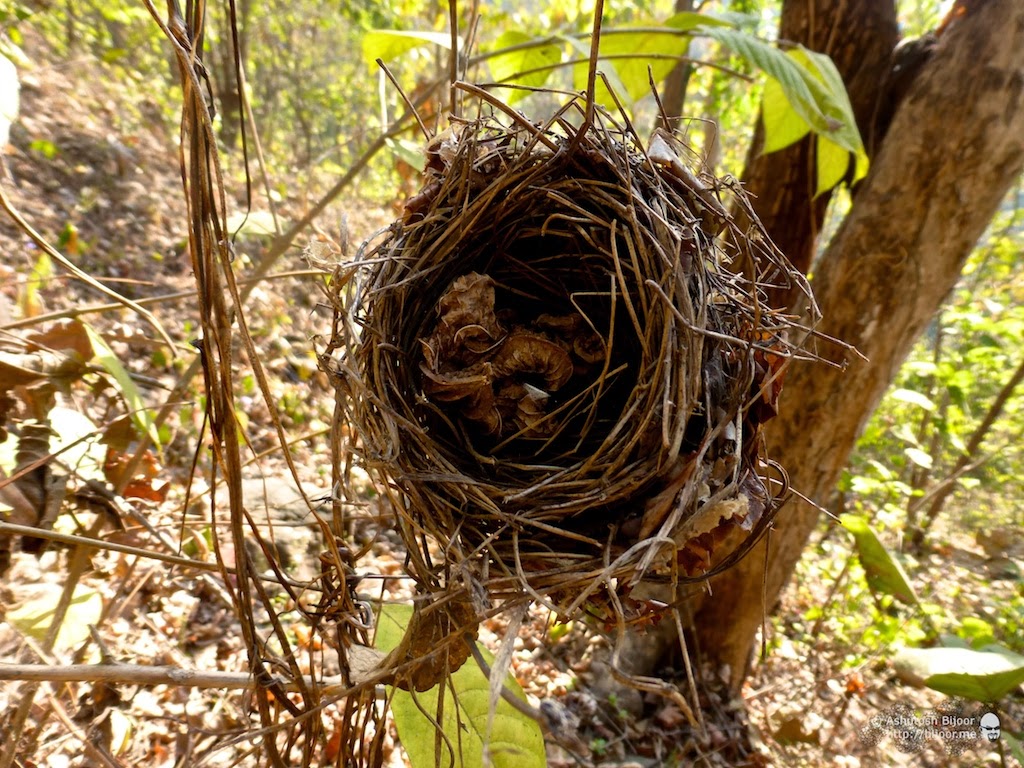 Saw this abandoned bird’s nest neatly hidden among the bushes. As I discovered later, this forest is a bird watcher’s paradise. So another visit with some knowledgeable birders is a must! 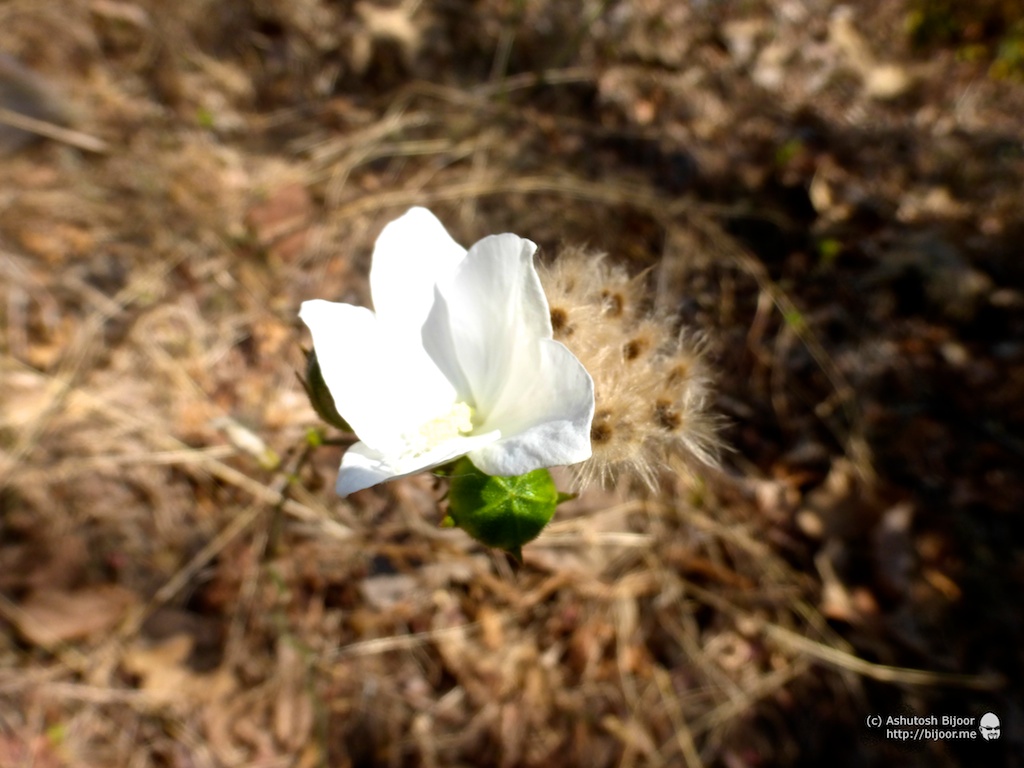 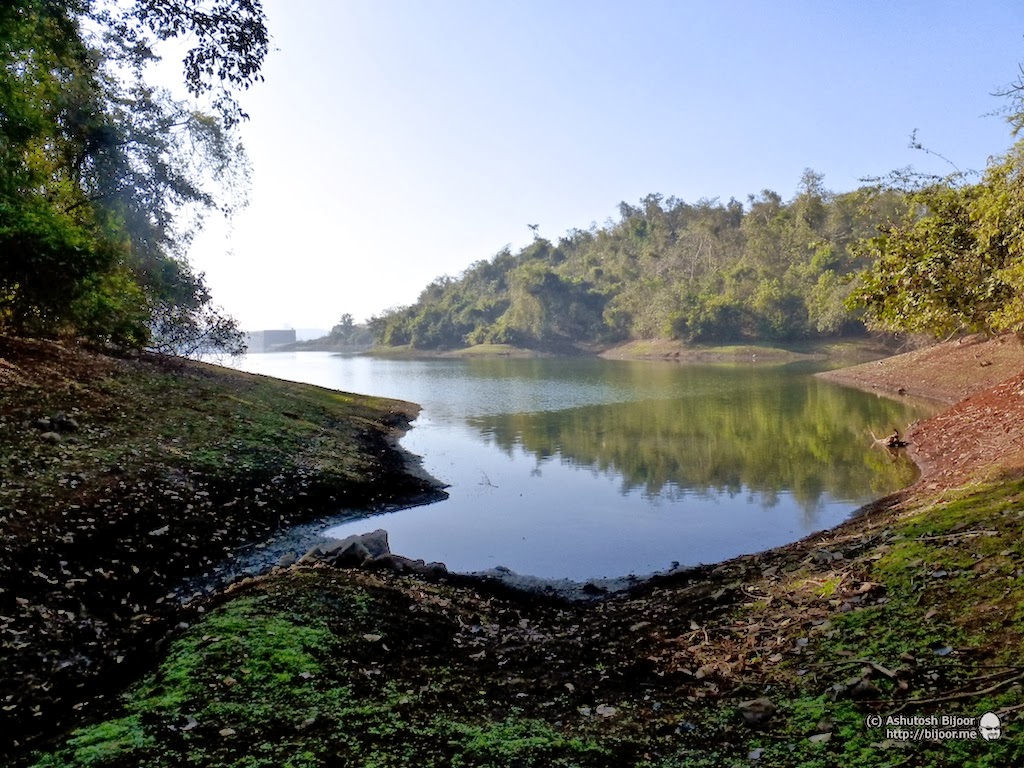 After a short trek, I reached the water front in this hidden cove. I could see a small path leading along the coast and followed it as far as I could go without stepping into the water 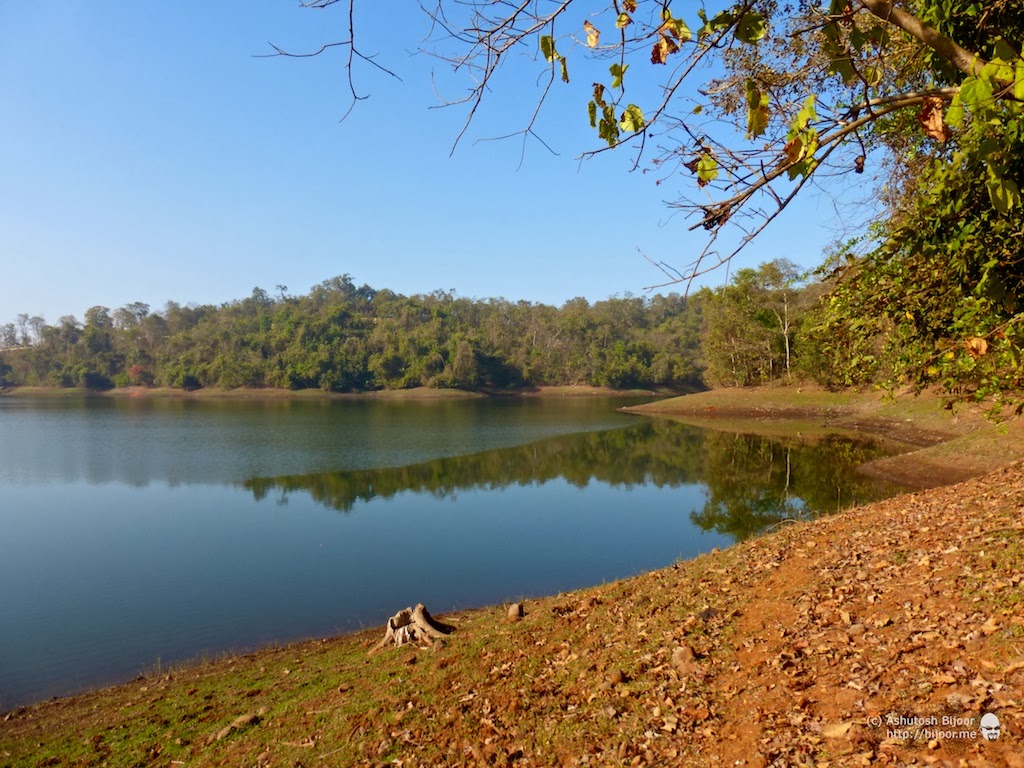 Thick forests surround the lakeside and the area is a well-established corridor for three different leopard habitats. On one side is Naneghat hills, which reach into Junnar; on the other, the densely forested Malshej; and on this third side, the jungle between Murbad and Kalyan 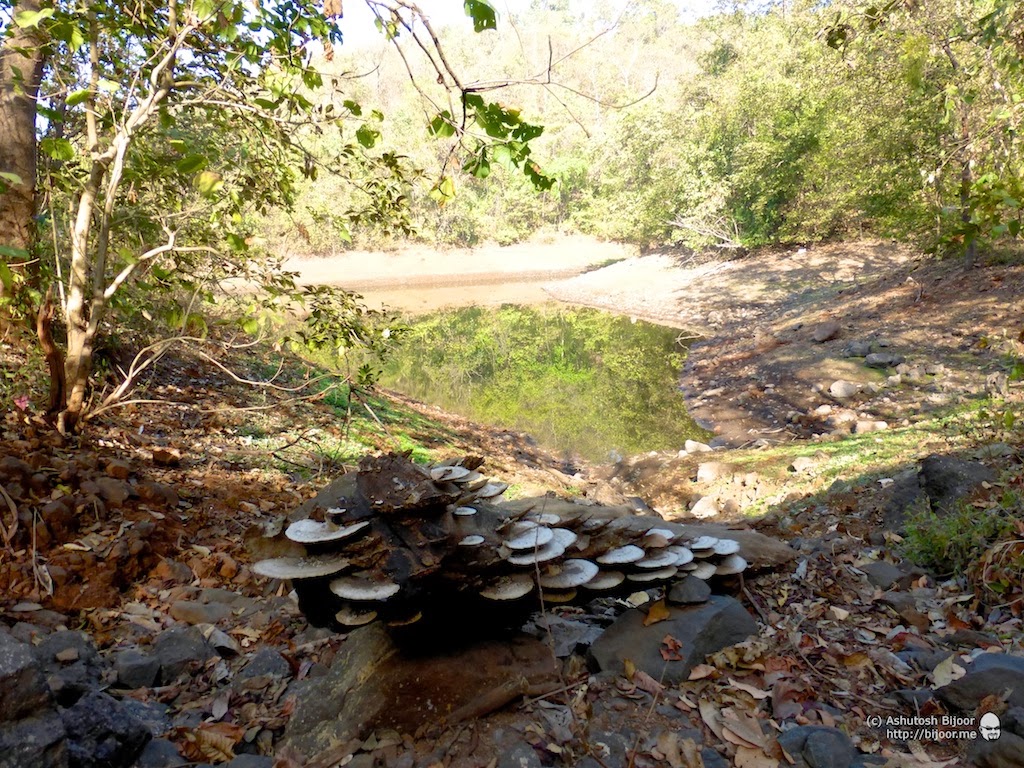 I found one more cove and settled down for a short rest, relaxing in the cool shade and enjoying the constant chirping of birds. Do not miss to see the video clip further down below to see who joined me there when I was resting! 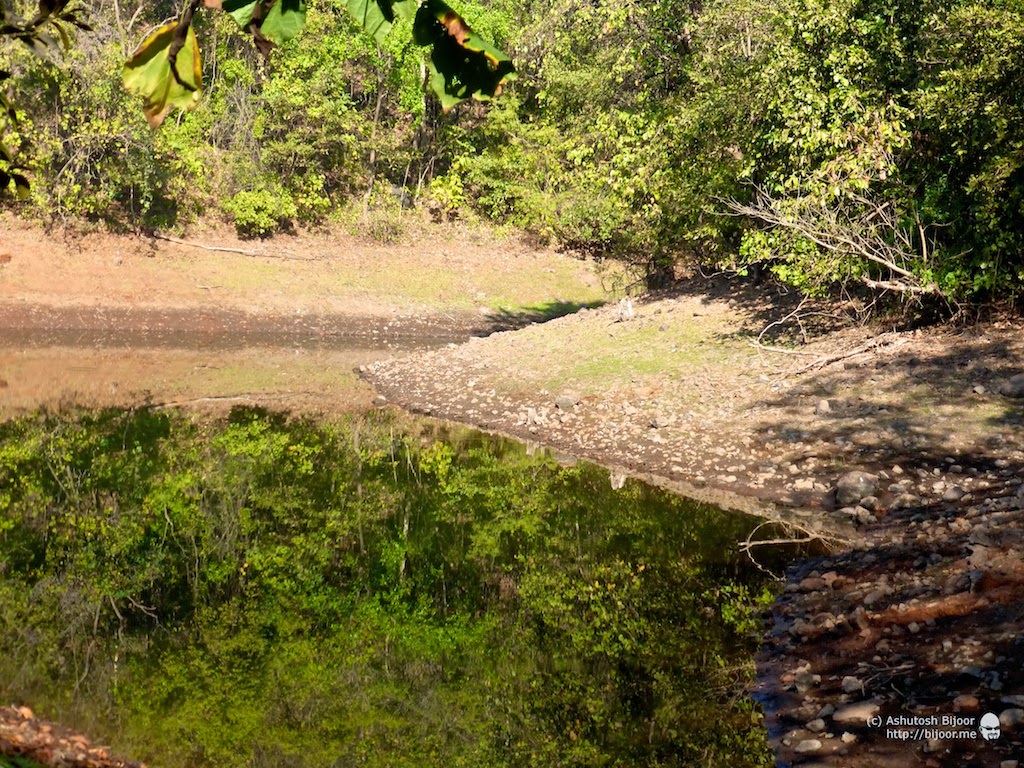 The still water of the lake perfectly reflected the green forest creating an illusion of an alternate upside down world under the water. But the peace here hides some unpleasant facts. This area was once occupied by small villages, and they have had to uproot their lives and move out to make way for the water (ref) 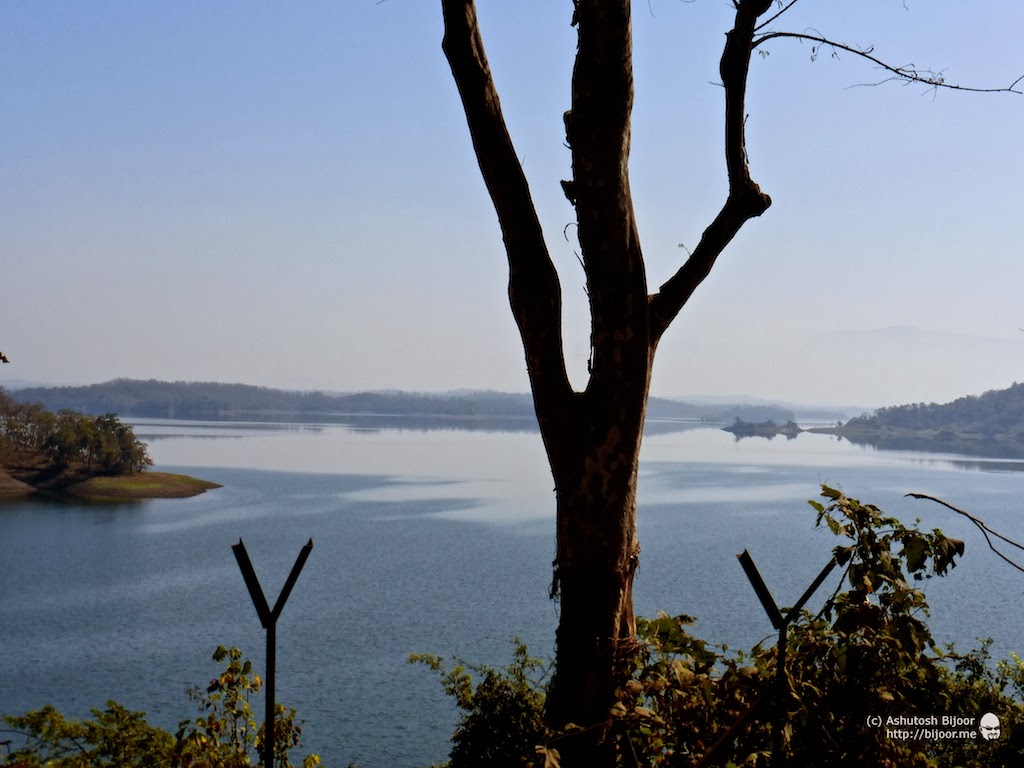 After enjoying the company of my forest friends at the water front, I climbed back to where I had parked my cycle, and headed back. This is a view from a spot near the dam where the road looks over the dam. The water from the lake supplies drinking water to the fast growing areas including Thane, Navi Mumbai, Kalyan, Dombivili, Ulhasnagar, Bhiwandi, Nizampura, and Mira-Bhayander 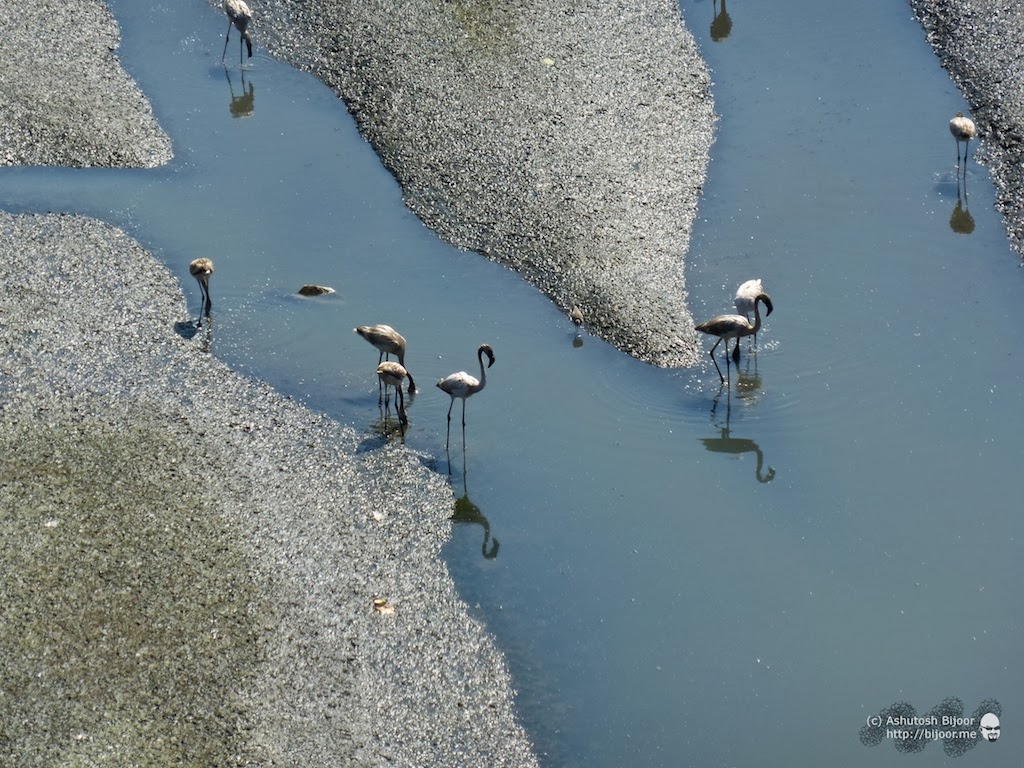 See this video clip that reveals the friends I made in the forest, and more about my findings on the way back to Mumbai

When I got back and did some research to try to identify my feathery forest friends, I came to know that the Barvi Dam and lake area is a well known bird watcher’s paradise. In winter, migratory birds flock to the forests and the lake, and one can spot birds in the forests like Long-Tailed Shrike, Bronzed Drongo, Black Drongo, Jungle Babbler, Yellow-Eyed Babbler, Ashy Prenia, Rufous Treepie, Great Raket-Tailed Drongo, Brahmini Sterling as well as water birds like Little Cormorant, Cattle Egret, Little Egret, Intermediate Egret, White-Throated Kingfisher, Indian Pond Heron, Black-Crowned Night Heron, Lesser Whistling-Duck, White-Breasted Waterhen, Common Moorhen, Bronze-Winged Jacana and Spitfires.