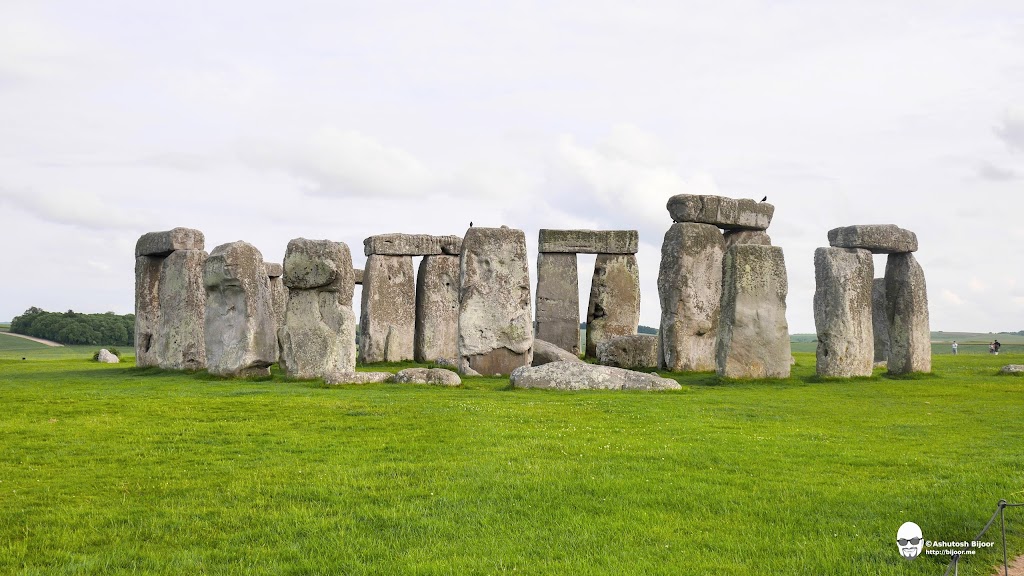 While on my business visit to London, my son Rohan joined me there for his Football coaching camp at Football CV Academy. After we were both done with our respective assignments, we spent a week traveling around in London city. But the highlight was our one day visit to Bath and Stonehenge.

After doing some research on TripAdvisor, we found the reviews for The English Bus to be one of the best! 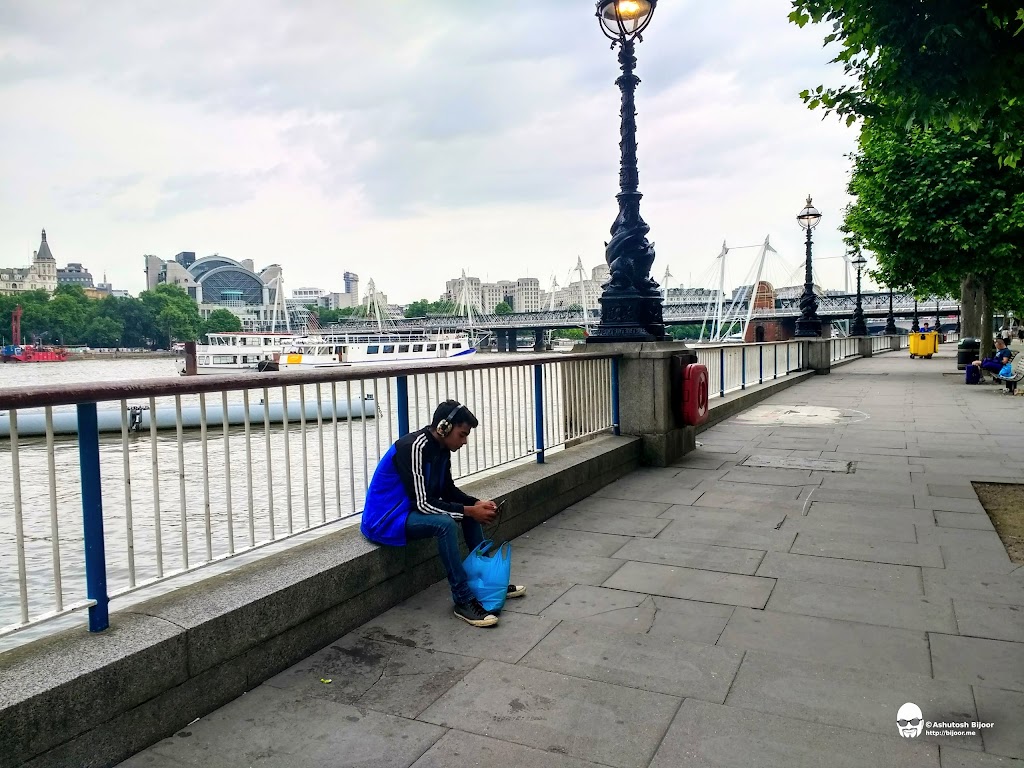 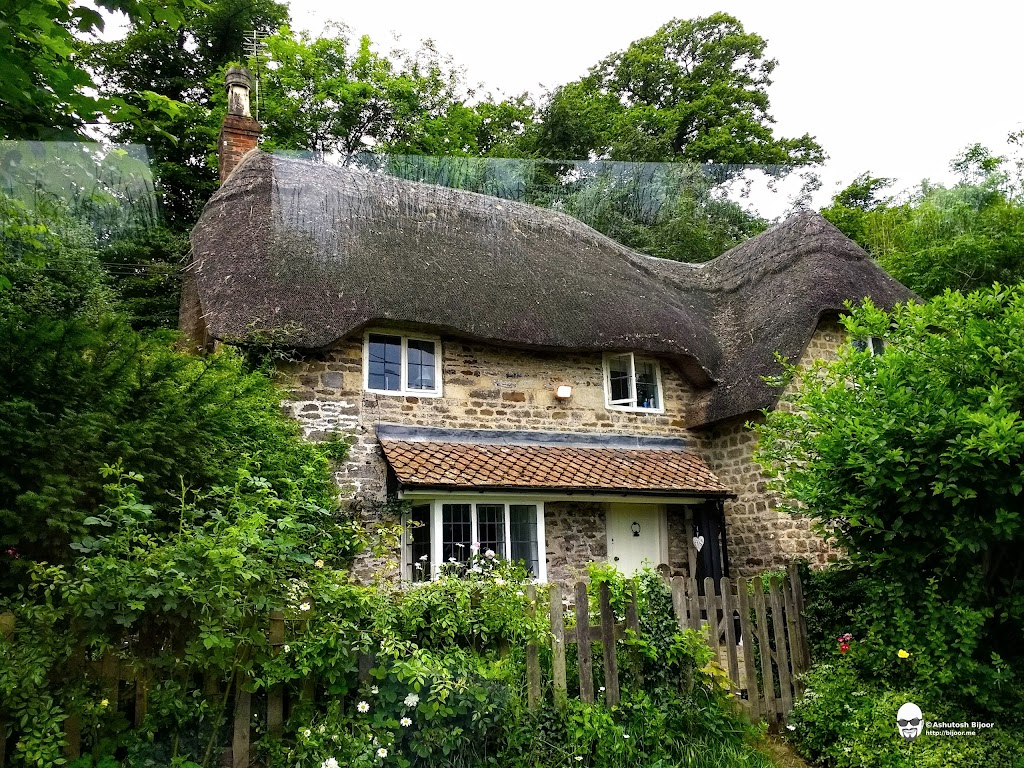 On the way, Andy pointed out the unique thatched roofs of houses through the window. Until the late 1800s in most of England, thatch was the only roofing material available to the bulk of the population in the countryside, in many towns and villages. Gradually, thatch became a mark of poverty, and the number of thatched properties gradually declined (ref). 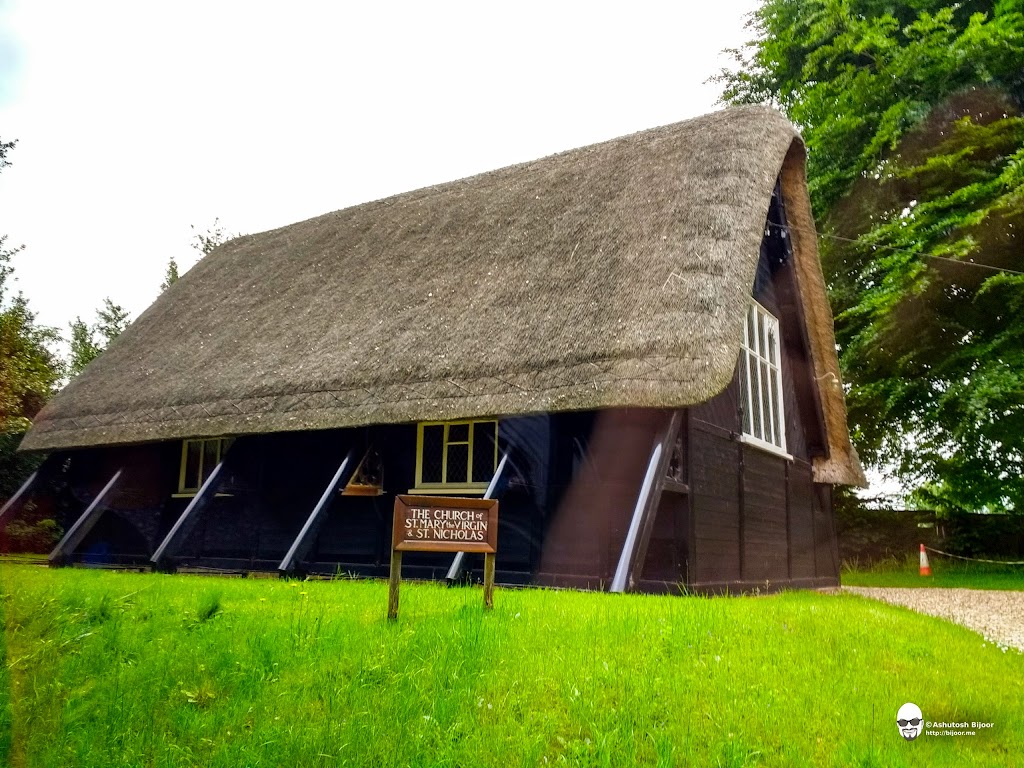 As the houses and this church demonstrate, thatch has become much more popular in the UK over the past 30 years. It is now a symbol of wealth rather than poverty. There are approximately 1,000 full-time thatchers at work in the UK, and thatching is becoming popular again because of the renewed interest in preserving historic buildings and using more sustainable building materials (ref). 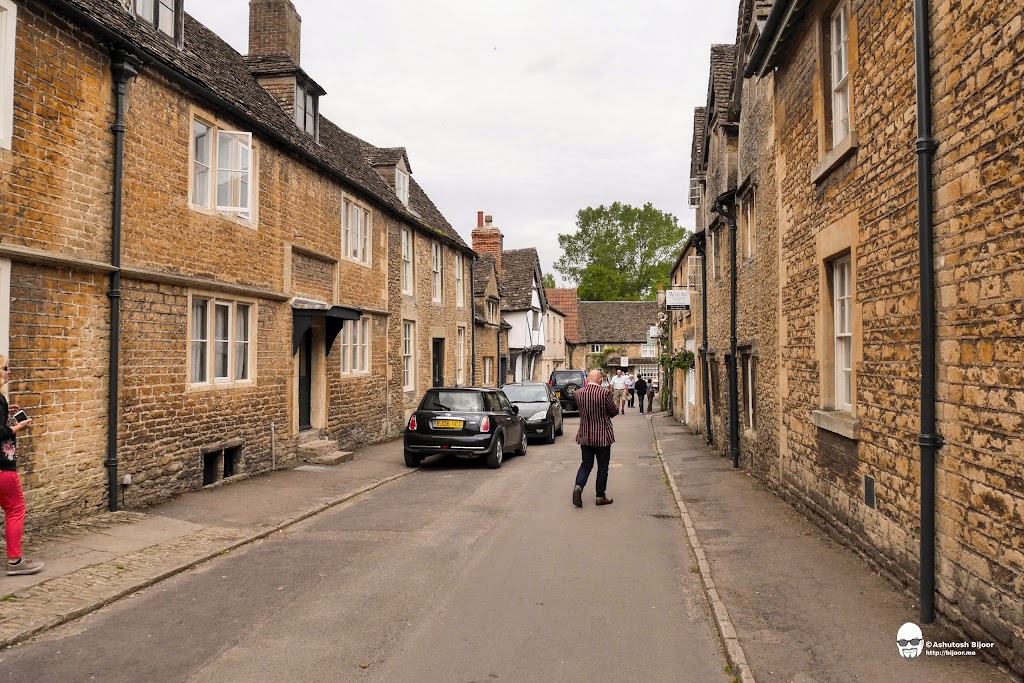 Our first halt was a quaint little town with a remarkable association with the Harry Potter series. However, we were requested to keep the identity of this location secret. 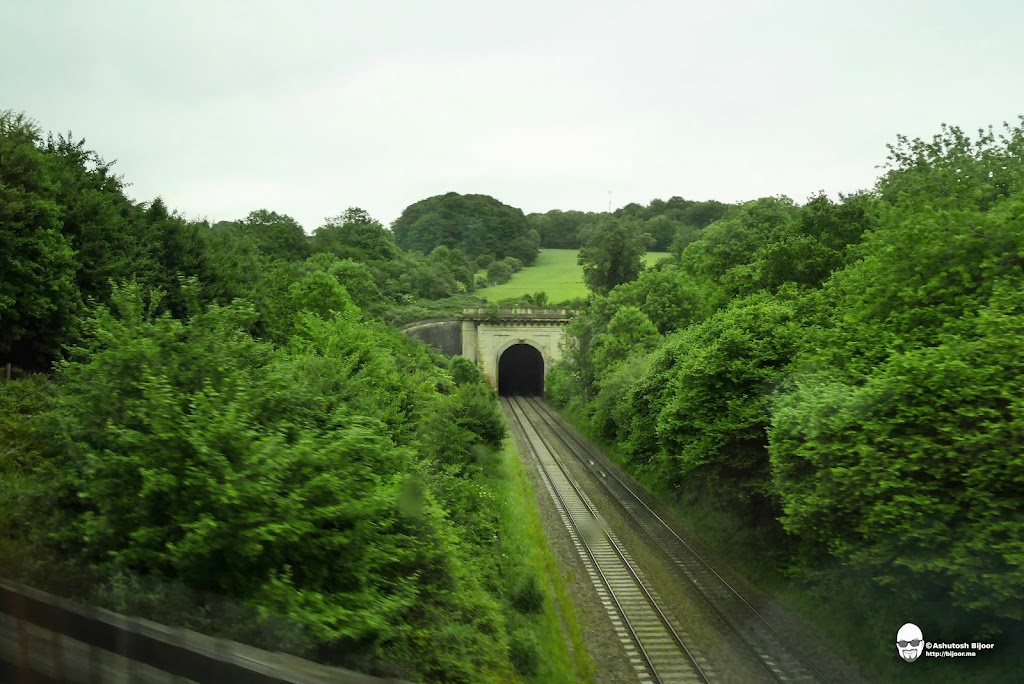 We saw the Box Tunnel - the railway passage that connects Bath to Chippenham. Designed by the famous British engineer Isambard Kingdom Brunel, legend has it that he used his cunning engineering skills to add a personal touch to it. Brunel is said to have aligned the tunnel so that the light would shine through at sunrise just once a year - on his birthday on April 9th!(ref) 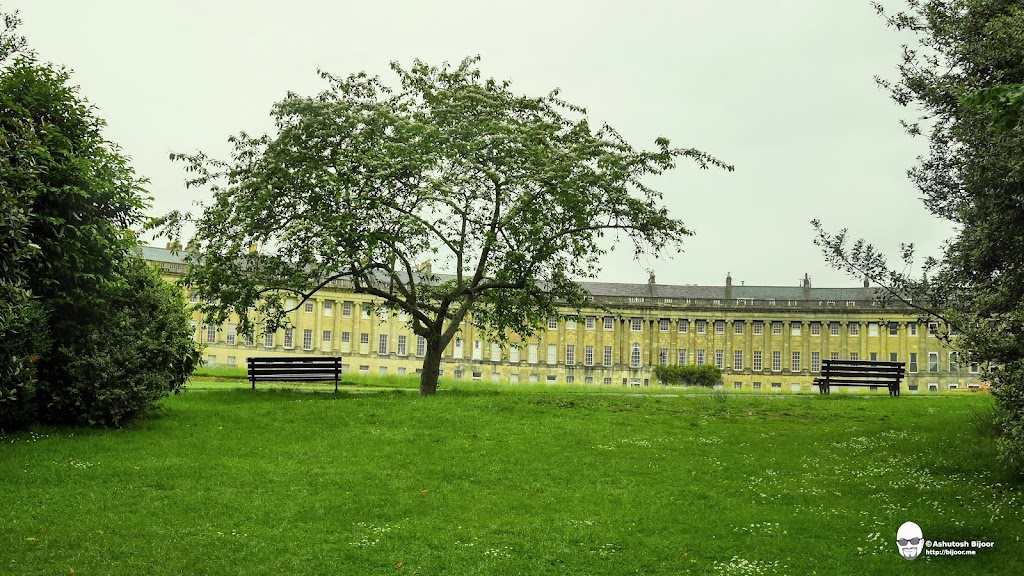 When we reached Bath, the first stop was to see The Royal Crescent - a row of 30 terraced houses laid out in a sweeping crescent. Designed by the architect John Wood, the Younger and built between 1767 and 1774, it is among the greatest examples of Georgian architecture to be found in the United Kingdom and is a Grade I listed building.(ref) 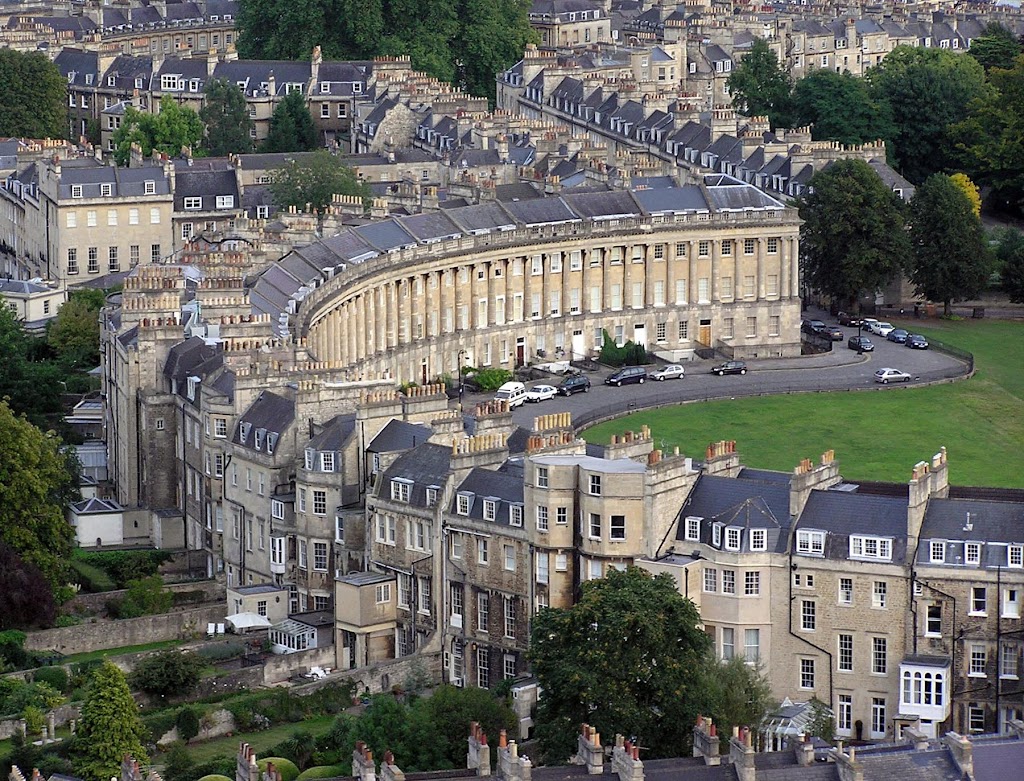 As seen in this photograph from a hot air balloon, though the front curved facades of the buildings in the crescent are uniform and symmetrical, the houses behind are all different. Each original purchaser bought a length of the façade, and then employed their own architect to build a house behind the façade to their own specifications; hence what can appear to be two houses is occasionally just one. This architecture, described as "Queen Anne fronts and Mary-Anne backs", occurs repeatedly in Bath. (photo credit) 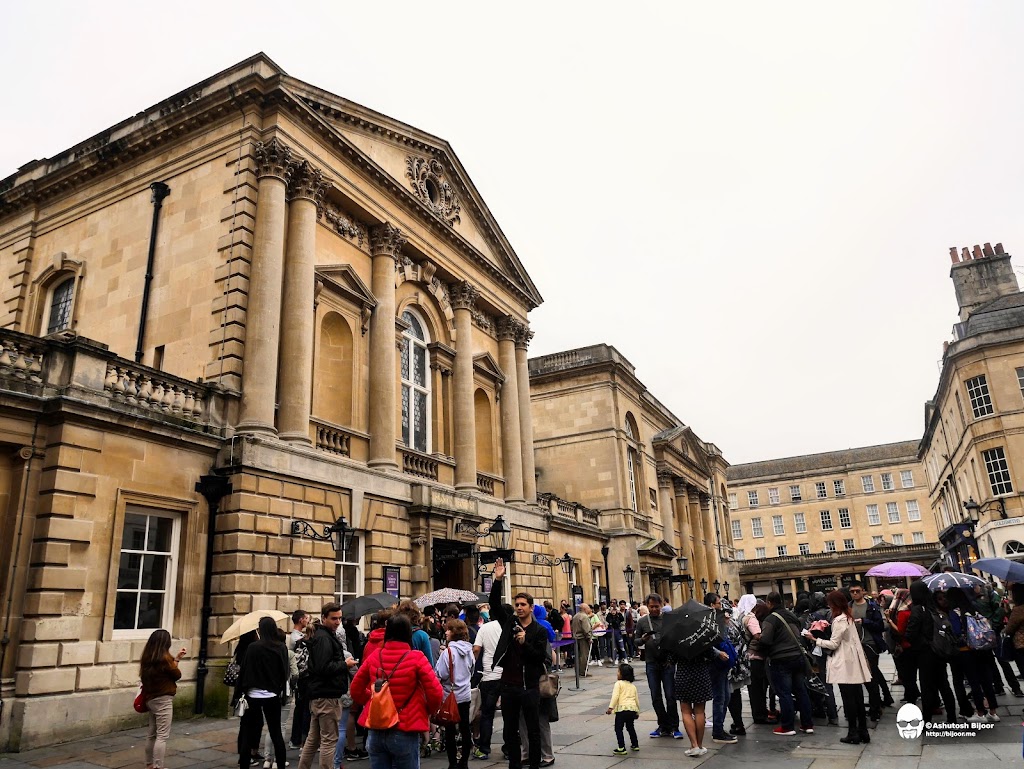 Our next destination was the Roman Baths, a major tourist attraction that, together with the Grand Pump Room, receive more than one million visitors a year! The first shrine at the site of the hot springs was built by Celts and was dedicated to the goddess Sulis, whom the Romans identified with Minerva. The name Sulis continued to be used after the Roman invasion, leading to the town's Roman name of Aquae Sulis ("the waters of Sulis") (ref). 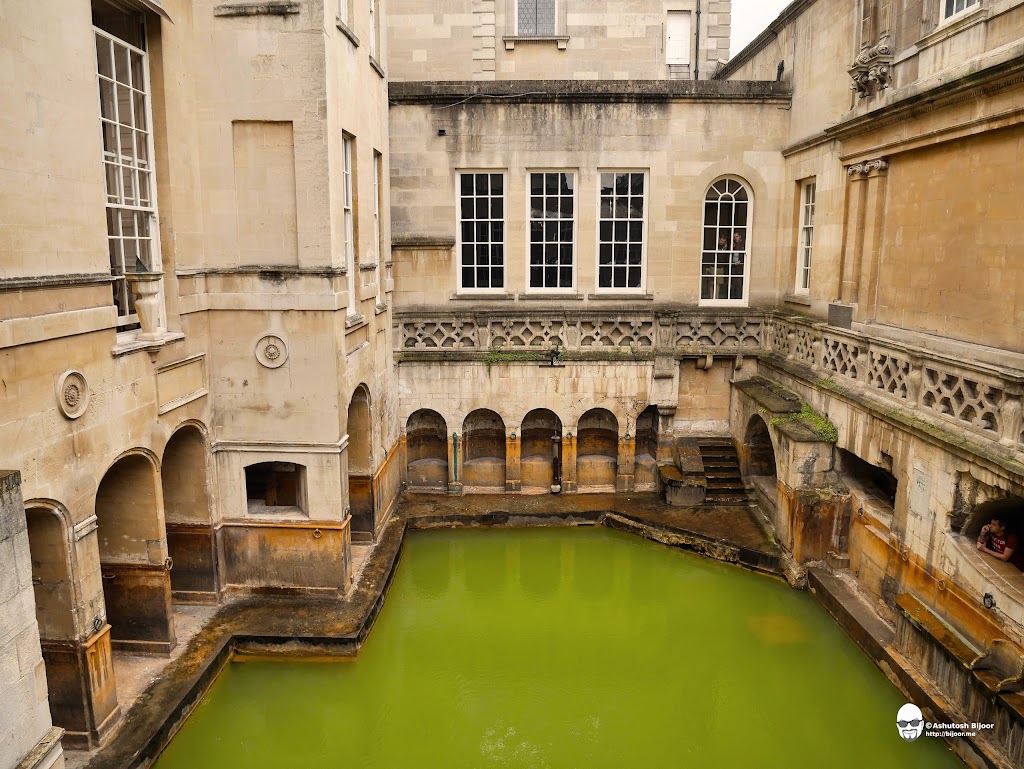 To see an actual Bath without waiting in the queue, one can enter the Roman Baths Kitchen - from where this picture was taken. The water that flows through the Roman Baths is considered unsafe for bathing, partly due to its having passed through the still-functioning original lead pipes. For a history of the baths, read this. 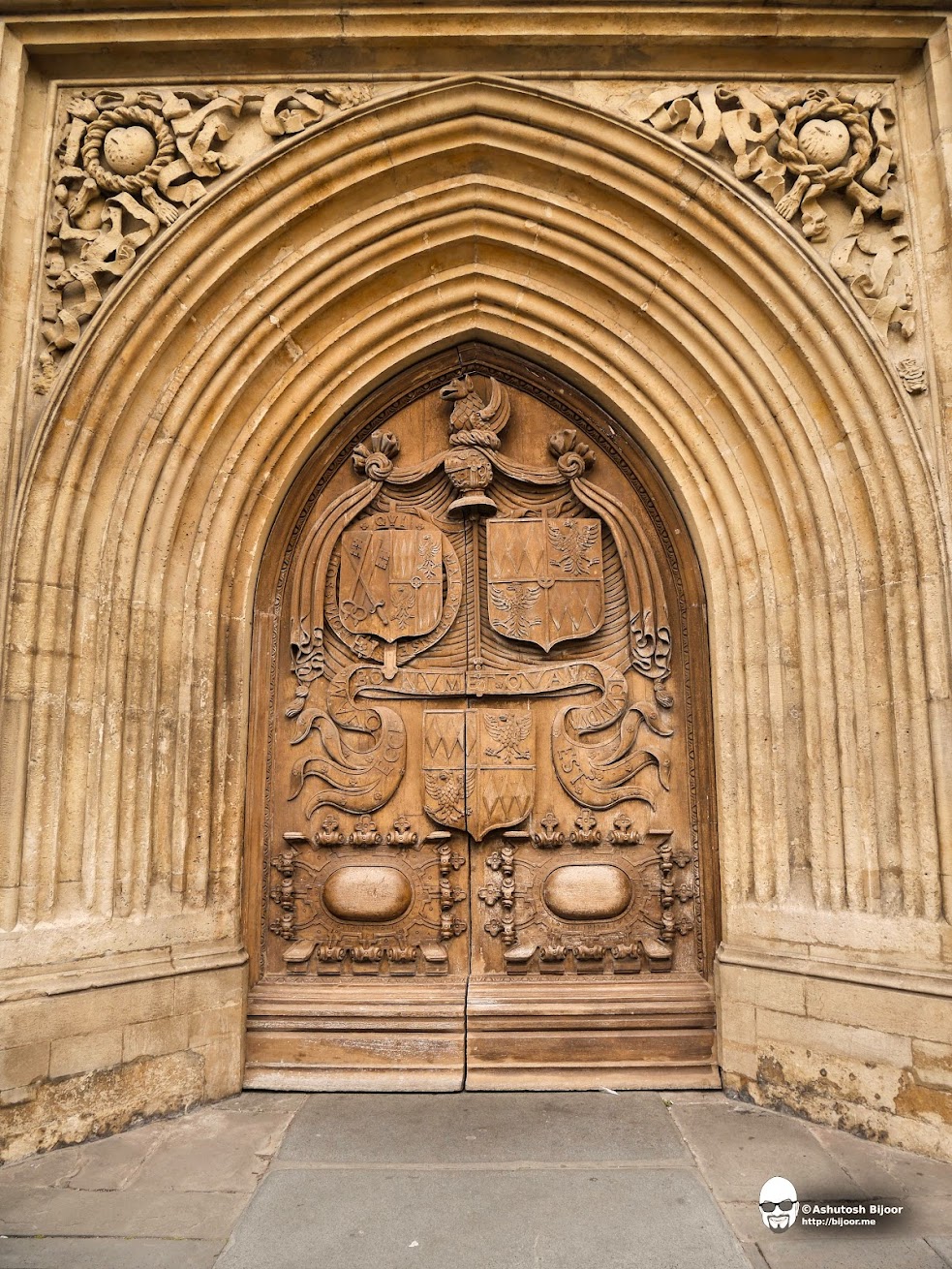 Right next to the baths is The Abbey Church of Saint Peter and Saint Paul, commonly known as Bath Abbey. This door is called the West Front door and was given to the Abbey in 1617 by Sir Henry Montagu, the Lord Chief Justice, in memory of his brothers Bishop James Montagu and Sir Walter Montagu. The door is decorated with three shields displaying the coats of arms of the three Montagu brothers. (ref) 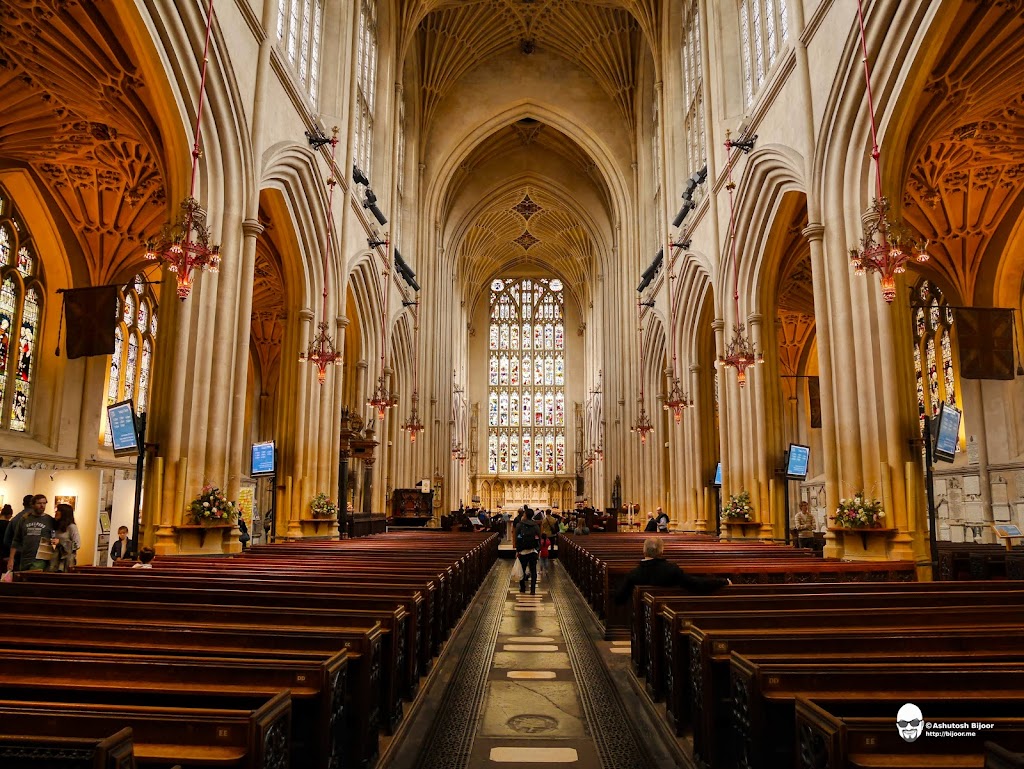 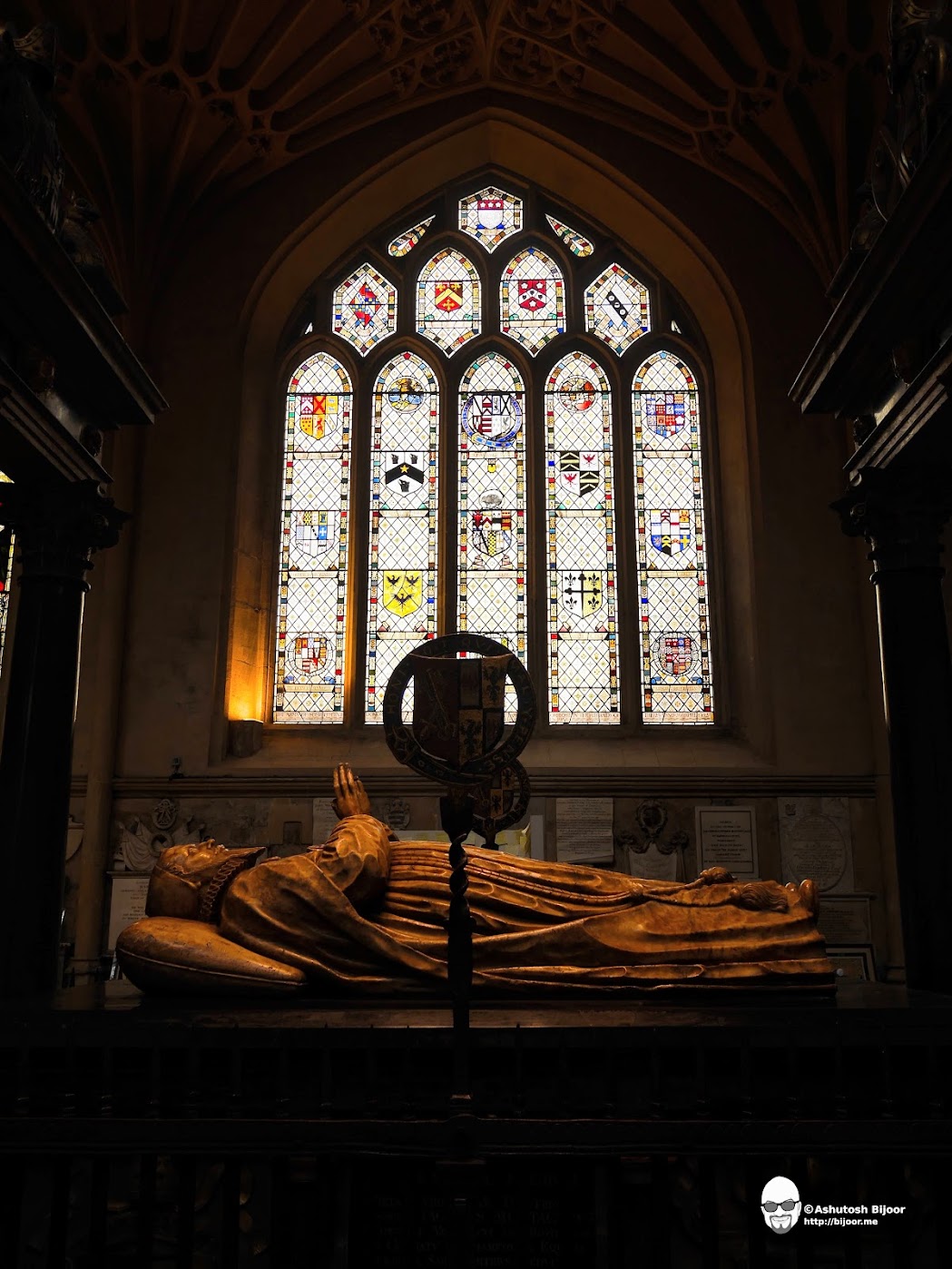 The elaborate tomb of Bishop James Montagu with an effigy of him in eternal repose is installed in a place of honor at Bath Abbey. In the early 17th century, Bishop Montagu restored the abbey's roof, since replaced in the 19th century with the amazing fanned and vaulted ceiling of today. (ref) 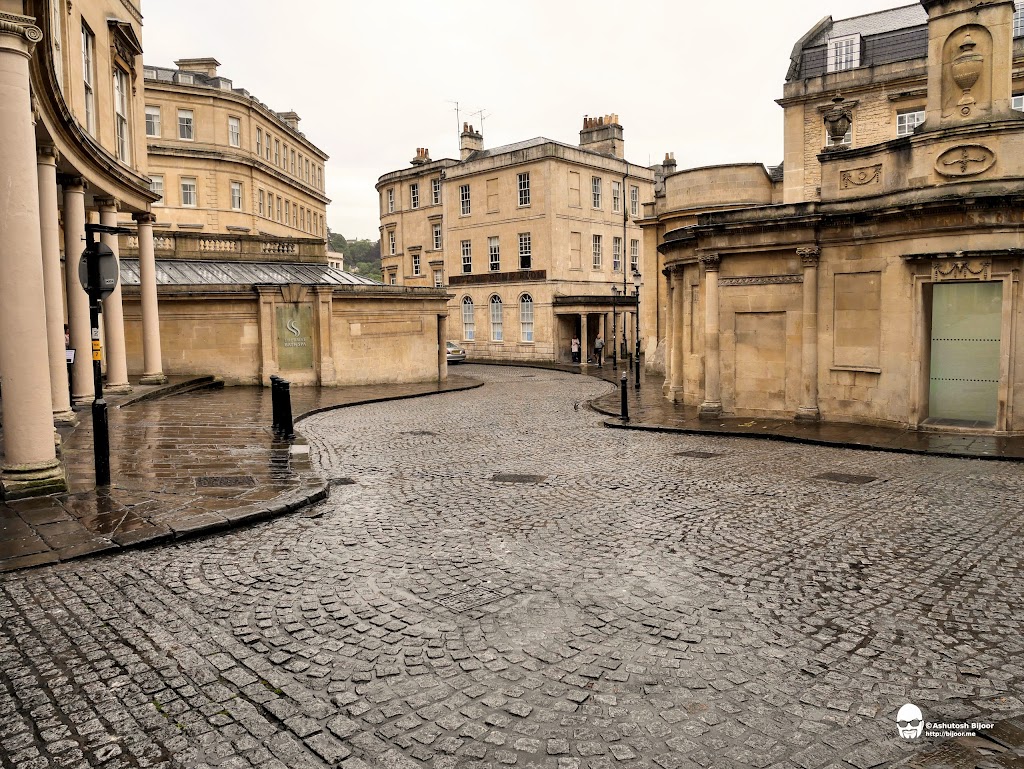 After a while, it started raining, and the streets magically emptied of the tourists who were crowding through them just a short while ago. Most of Bath's buildings are made from the local, golden-coloured, Bath Stone. Bath Stone is an oolitic limestone comprising granular fragments of calcium carbonate. It's warm, honey coloring gives Bath its distinctive appearance. An important feature of Bath Stone is that it is a freestone, so-called because it can be sawn or squared up in any direction, unlike other rocks such as slate, which forms distinct layers. (ref)

We then drove ahead to Stonehenge in Wiltshire, one of the most famous landmarks in the UK and regarded as a British cultural icon.

Stonehenge is a prehistoric monument consisting of a ring of standing stones. In about 2500 BC the stones were set up in the center of the monument. Two types of stone are used at Stonehenge – the larger sarsens and the smaller ‘bluestones’. The sarsens were erected in two concentric arrangements – an inner horseshoe and an outer circle – and the bluestones were set up between them in a double arc.

Probably at the same time that the stones were being set up in the center of the monument, the sarsens close to the entrance were raised, together with the four Station Stones on the periphery.

About 200 or 300 years later the central bluestones were rearranged to form a circle and inner oval (which was again later altered to form a horseshoe).(ref)

The above animation was created by stiching together photographs taken while walking around the monument.

The significance of Stonehenge itself can be summarized as follows: 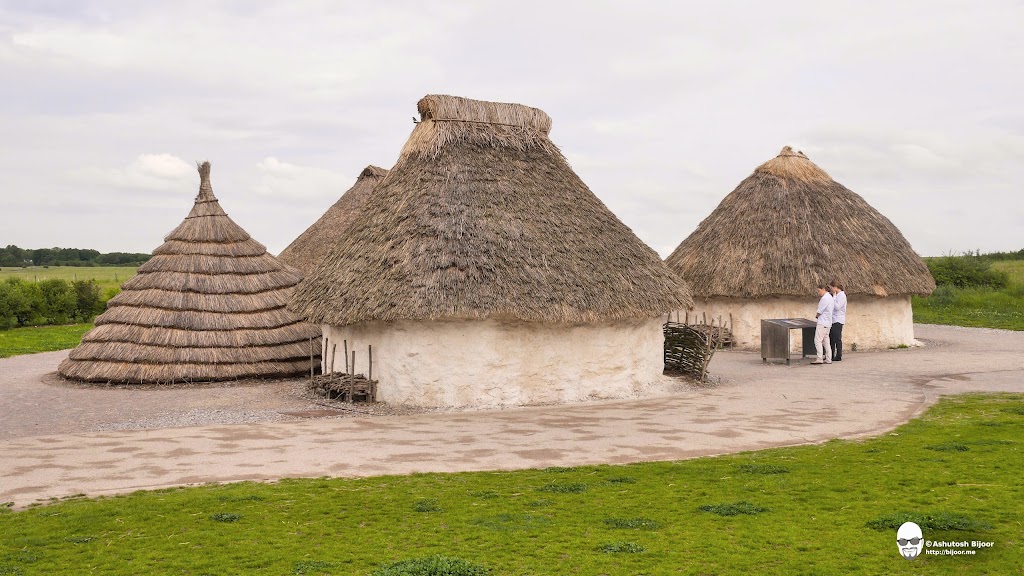 We also visited the Stonehenge museum and the reconstructions of Neolithic houses outside the visitor center. The houses are designed to demonstrate how people lived 4,500 years ago. 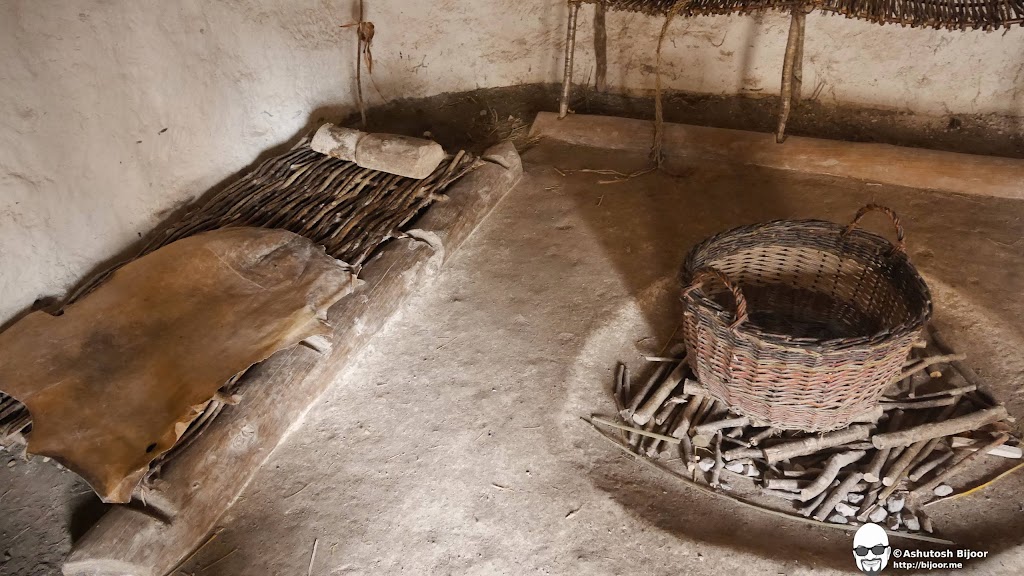 The houses were built using authentic materials and techniques, based on the evidence of dwellings found nearby. After this short visit to the museum, we got back into The English Bus and Andy drove us back to London. 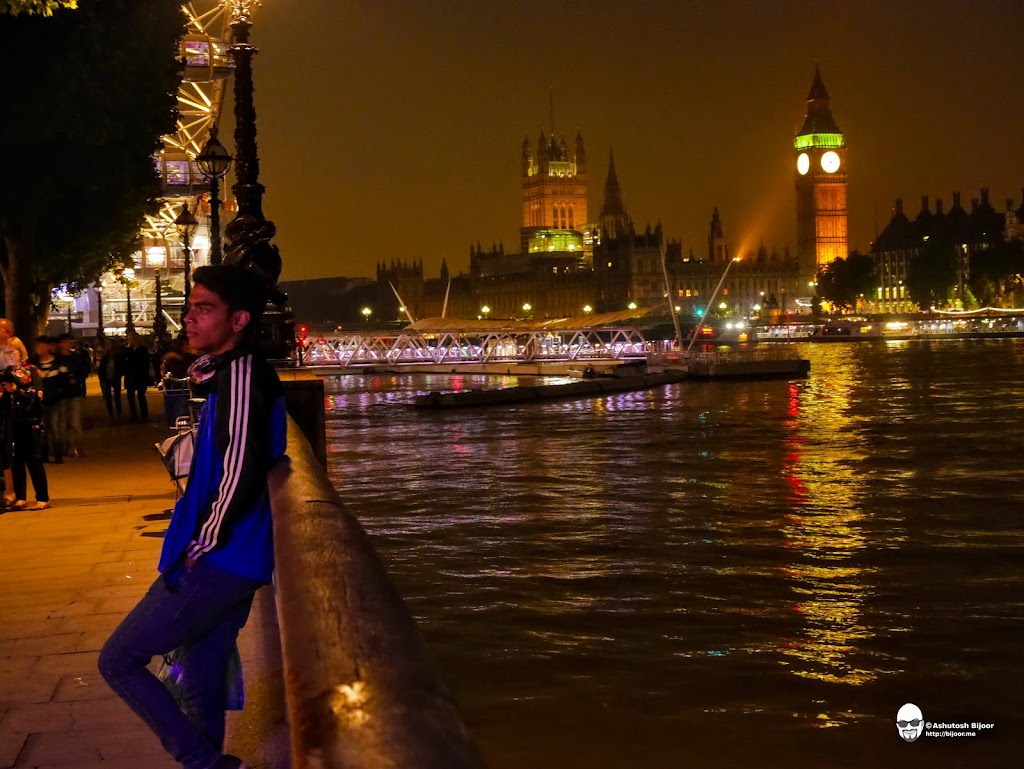 When we got back to London we had a nice dinner at the south bank and watched the water of the Thames lapping on the shore. 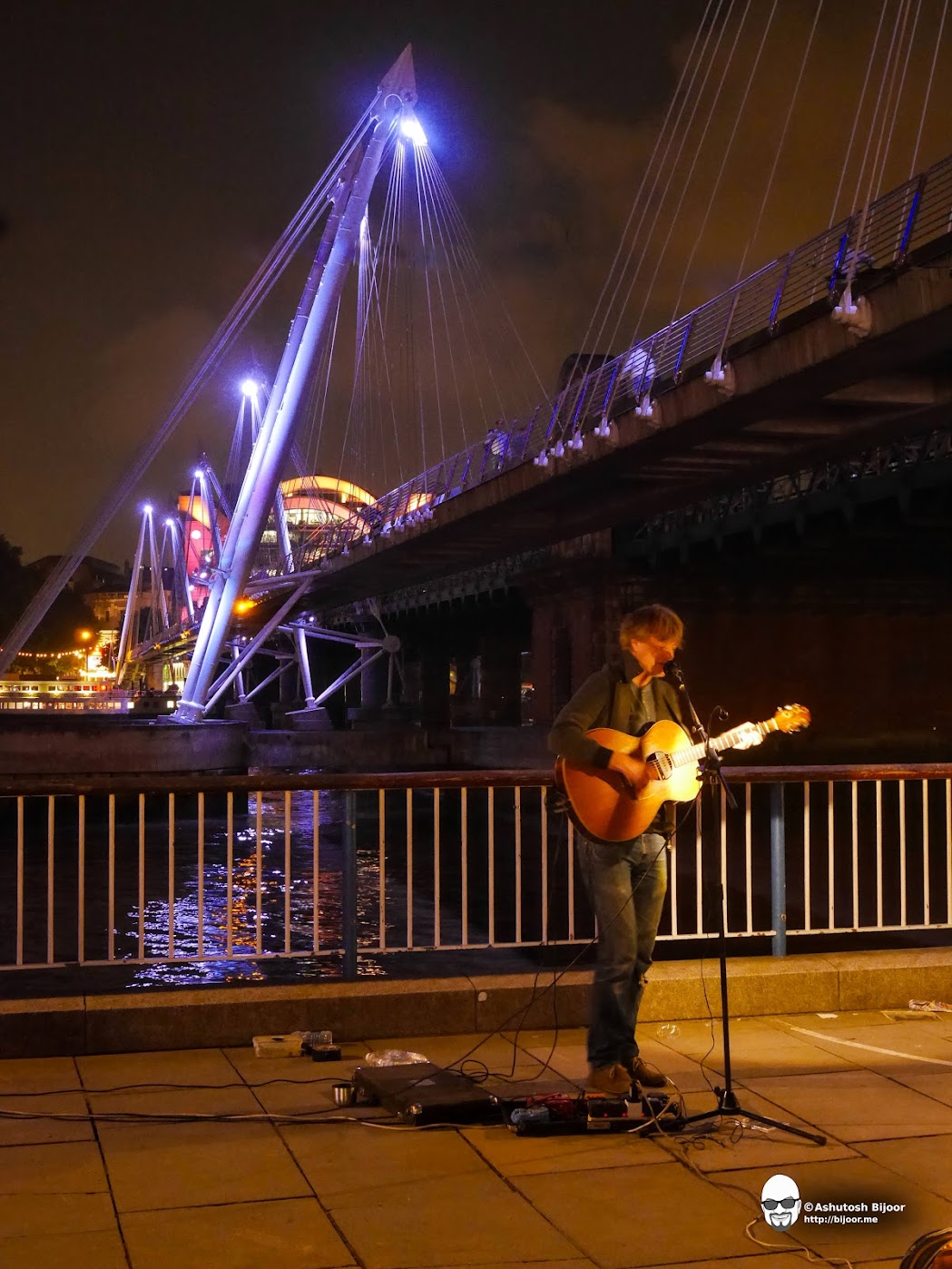 As we were sitting there, we heard a busker singing some Eagles and Pink Floyd songs.

What a perfect way to end an exciting day!