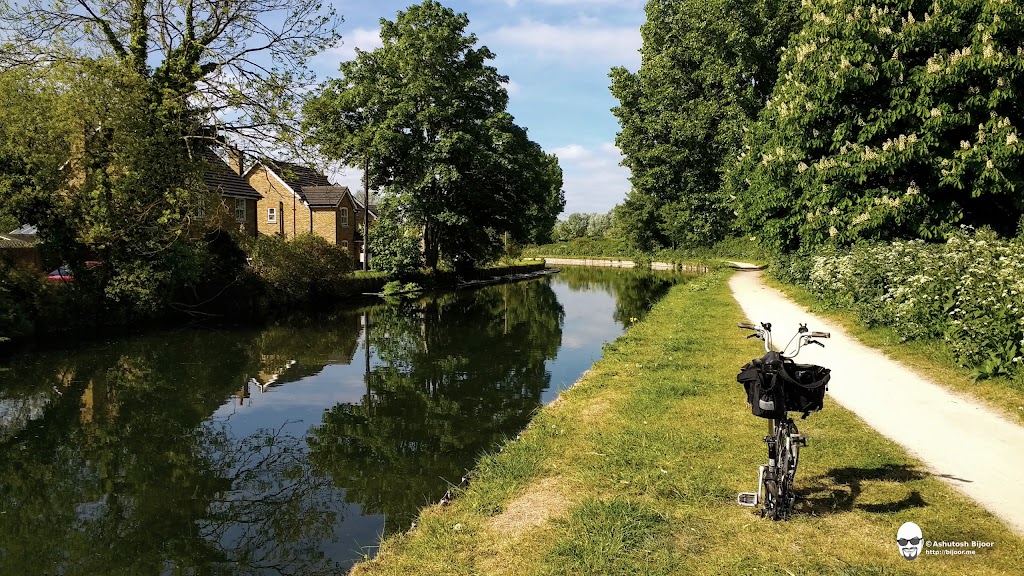 During a business visit to London accompanied by my trusty Brompton folding bicycle, I got a chance to explore the Lee Valley Regional Park. Here are some snapshots of the beautiful park. 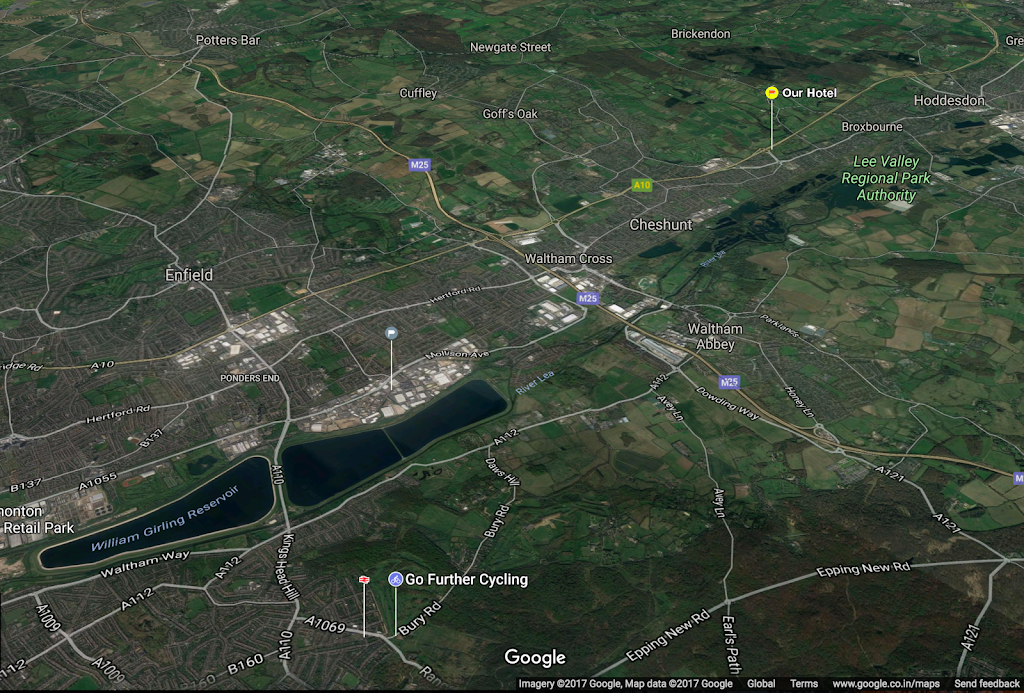 Luckily for me, not far from the hotel I was staying, was the beautiful Lee Valley Regional Park. This is a 26 mile long, 10,000-acre park. The park was created by a unique Act of Parliament as a “green lung” for London, Essex and Hertfordshire (ref). 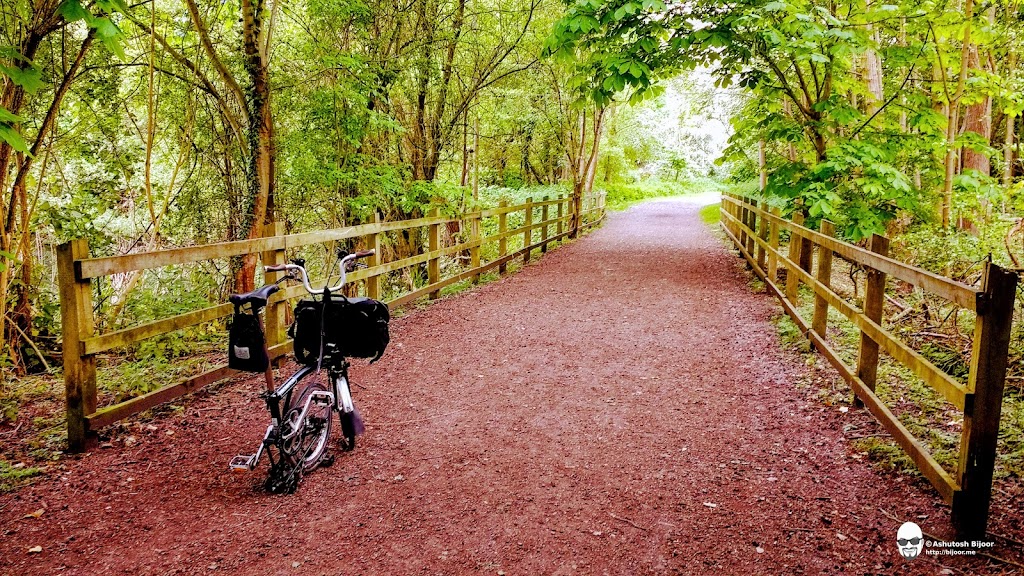 I lost no time in getting my Brompton into action. I had to pack it up in a soft case along with my clothes in plastic bags for padding and deflate the tires. So I quickly inflated the tires using the built-in pump, gave the bike a quick look for any damage (none, thankfully!) and set out to explore the Lee Valley Park. 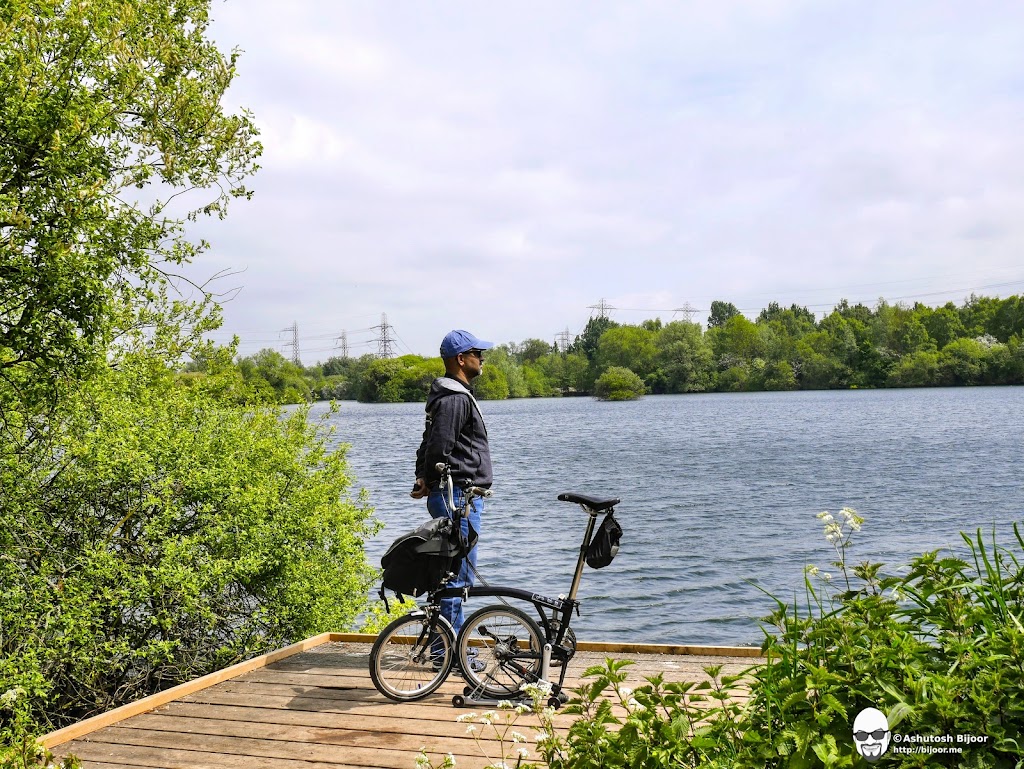 The River Lea (or Lee) originates in Marsh Farm, Leagrave, Luton in the Chiltern Hills and flows generally southeast, east, and then south through east London where it meets the River Thames, the last section being known as Bow Creek. It is one of the largest rivers in London and the easternmost major tributary of the Thames. Its valley creates a long chain of marshy ground along its lower length. For much of its distance, the river runs within or as a boundary to the Lee Valley Park. (ref)

There is a mud path that lines the river almost along the entire length. This path is great for cycling, jogging or walking. I cycled along the river several times up and down, for luckily the river ran generally in the direction of the place of my work venue as well. 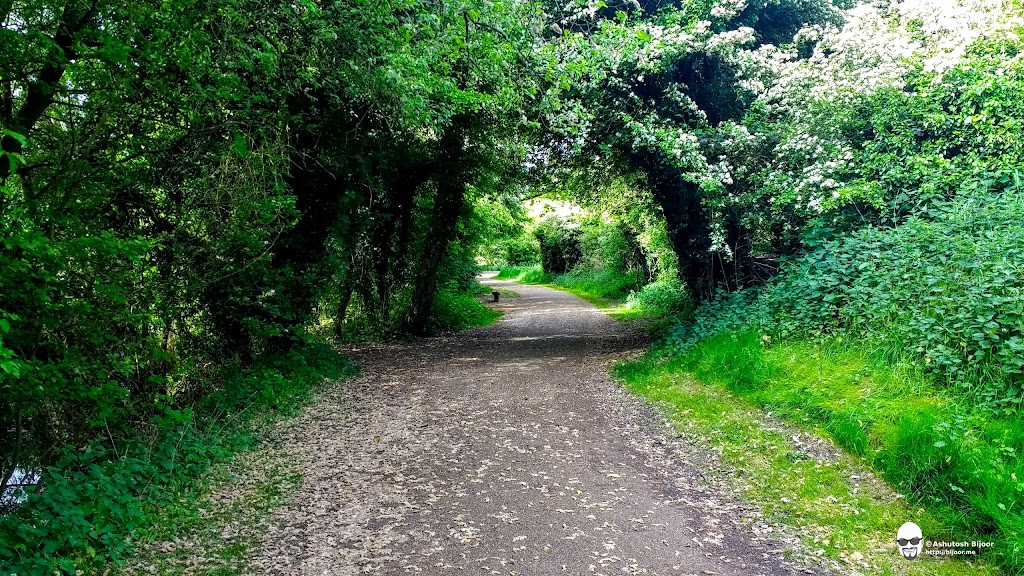 There are tracks all through the park that are lined with dense thickets of flowering bushes. Cycling along these paths is such a pleasure... with the wind whistling in your ears and the sun playing hide and seek. 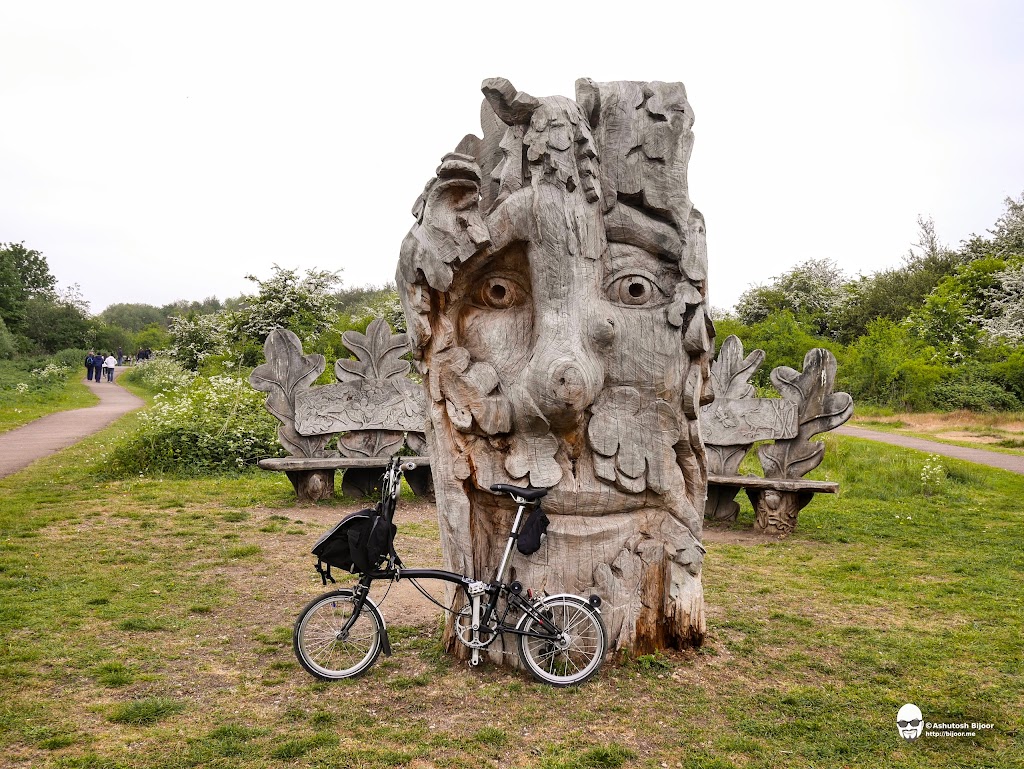 At various spots in the park, there are sculptures like this one by Ben Platts-Mills and Andy Ish, depicting nature’s watcher, the Green Man. The main piece is carved from the trunk of one huge Cedar tree and there are two figures hidden among the foliage (ref). 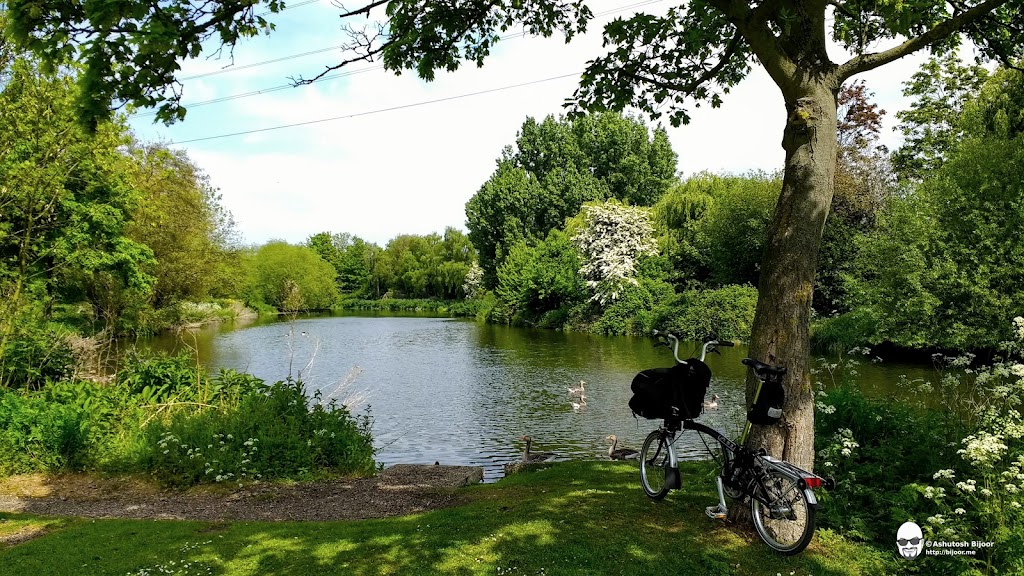 The park also has several species of birds and butterflies. There is also a wide range of ducks that can be seen swimming around in the river (ref). 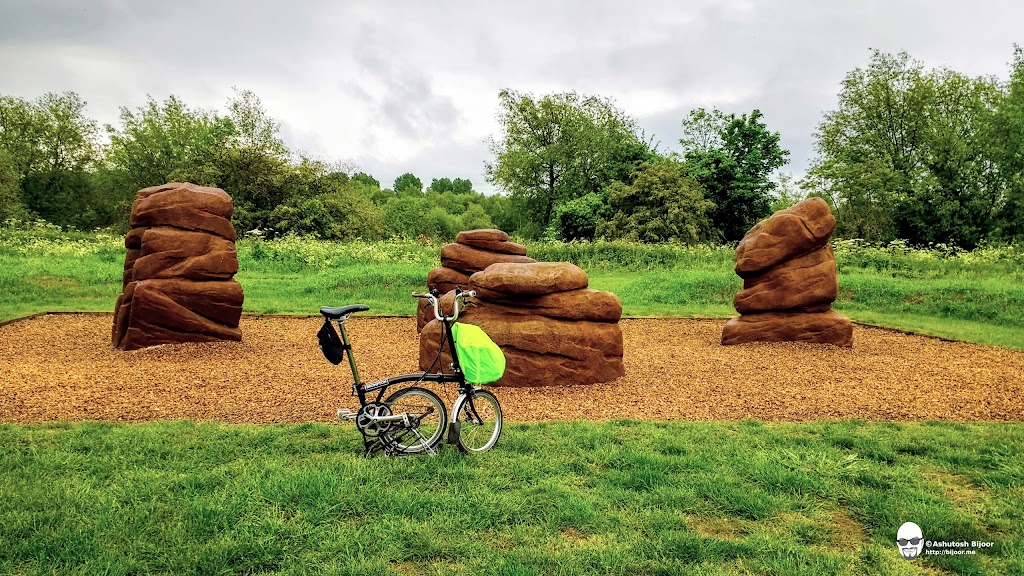 On one of my trips through the park, I came across the Play Boulders by Bencrete Ltd. The route is part of the Artwork Route - a mixture of surfaced pathways, towpath and grass pathways, several bridges (one with steep incline) and several walk-around and kissing gates (ref). 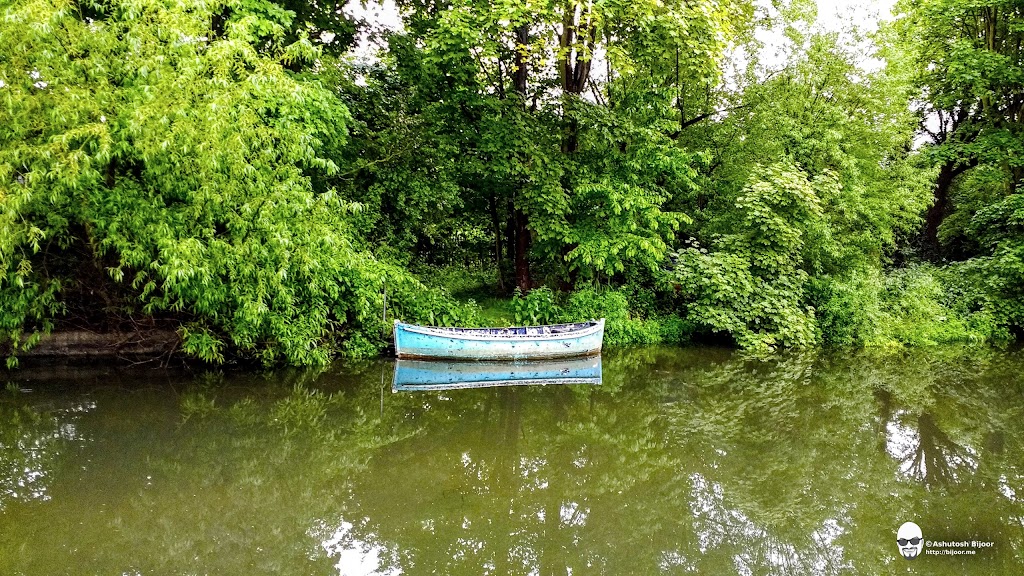 On one weekend, I cycled almost all the way from the northern end of the park to the southern end when I cycled to meet a friend in Barking. This quiet picture of a boat moored on the canal reminded me of a river back home in Konkan. 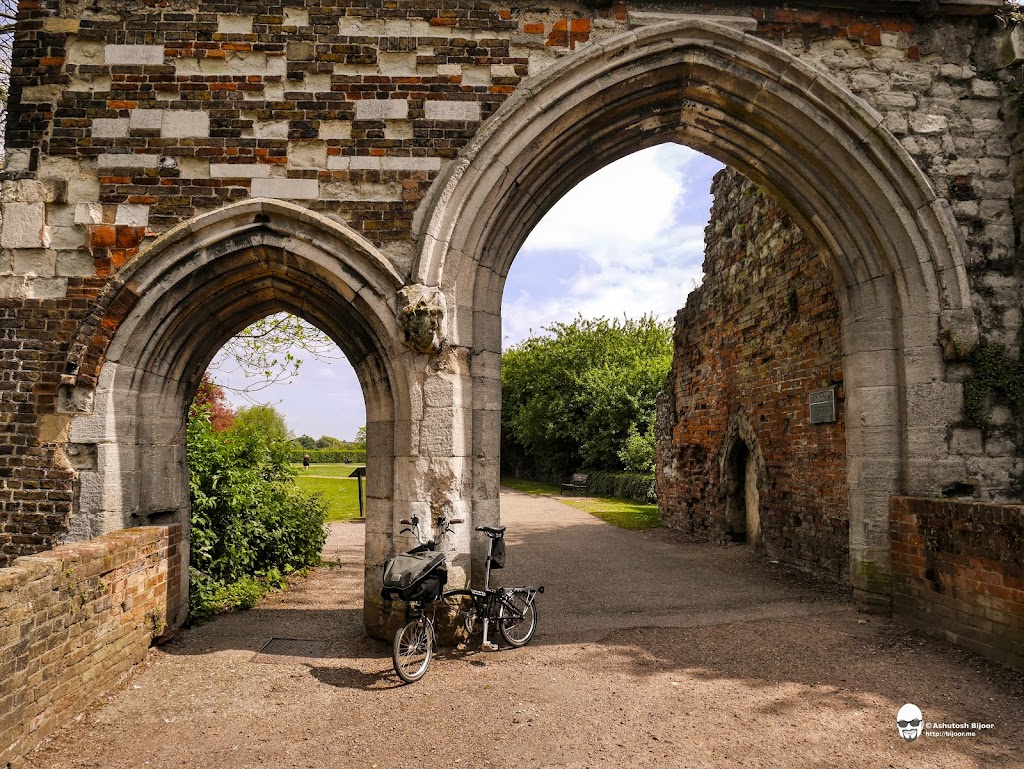 Along the river is located a pretty little town of Waltham Abbey. It is located on the Greenwich Meridian, between the River Lee in the west and Epping Forest in the east. 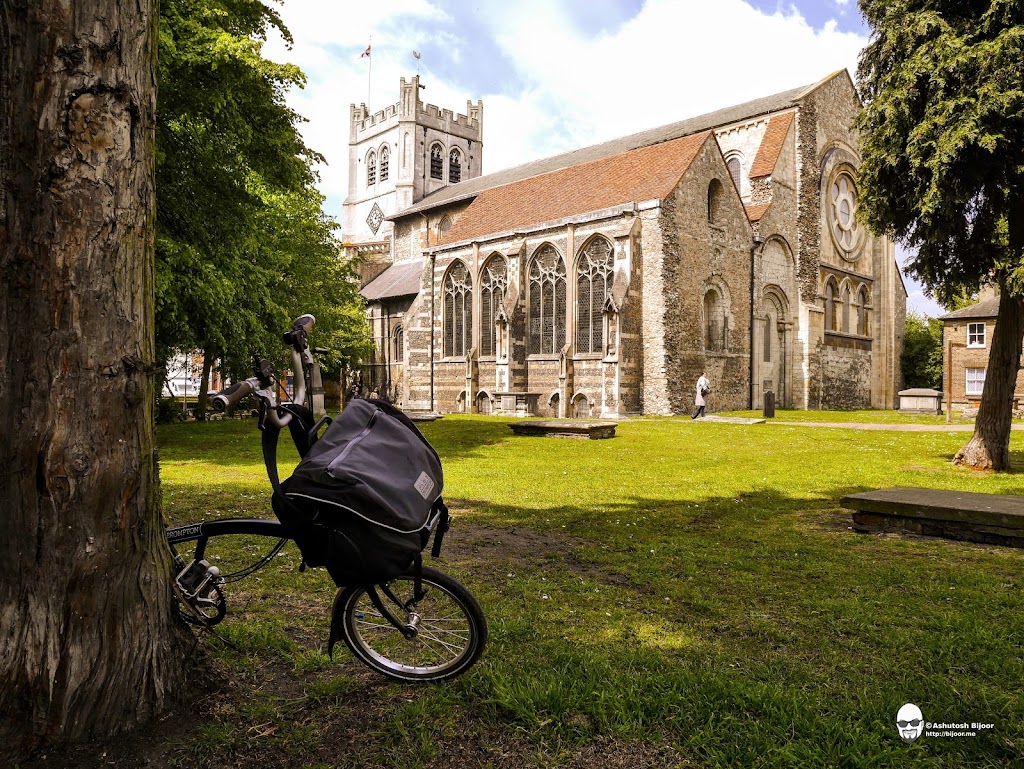 Waltham Abbey takes its name from its former abbey, now the Abbey Church of Waltham Holy Cross, a scheduled ancient monument that was prominent in the town's early history (ref). 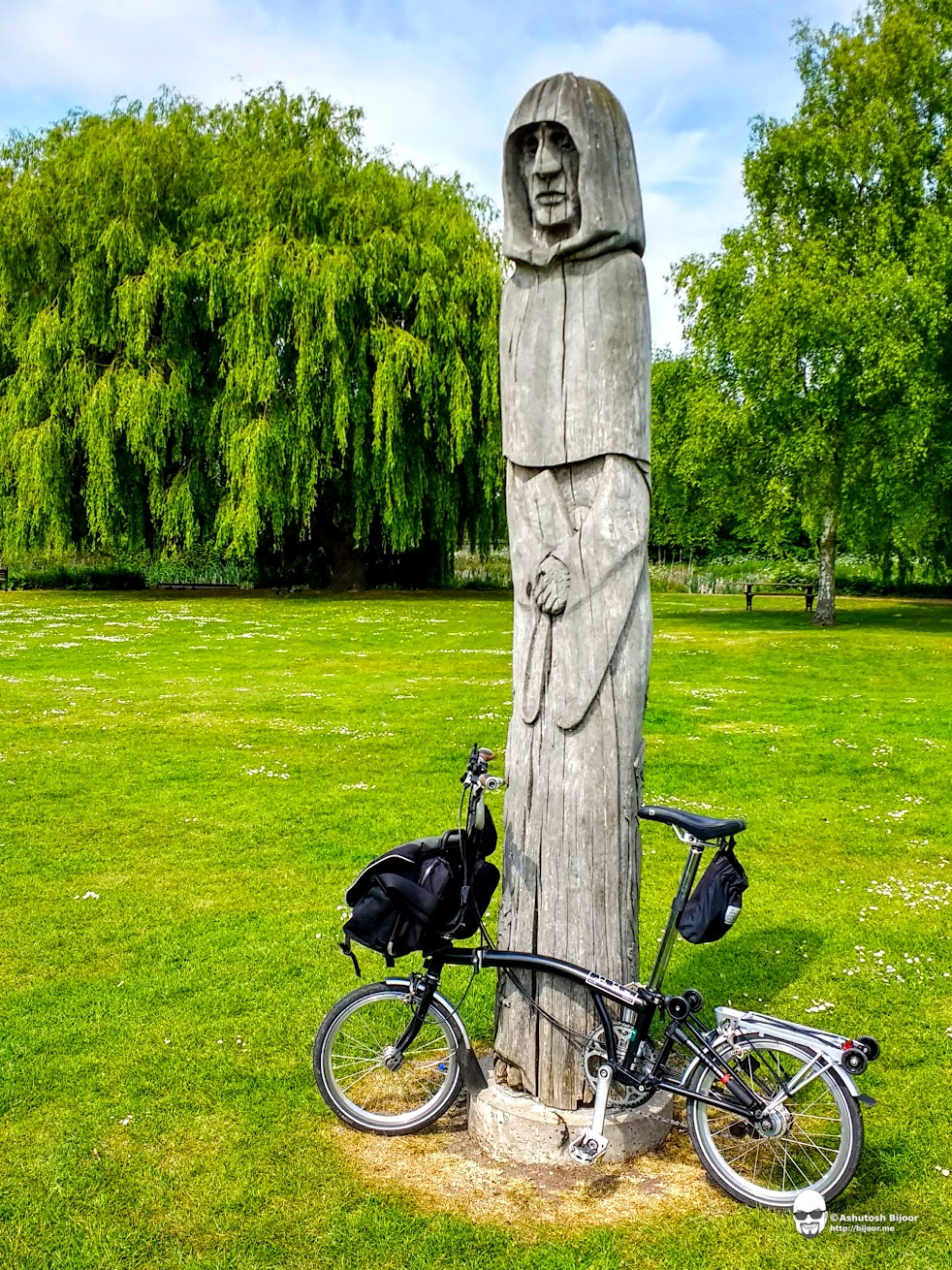 There are wide gardens all around the church, and it is a great spot for spending a quiet weekend. This sculpture titled "Ancestor" by Helena Stykianides depicted wearing a working habit, on the back of which are a series of shallow, shadowy images arranged hierarchically from the bottom up. It is carved from a nine-foot tree trunk from Epping Forest, donated by the Corporation of London (ref). 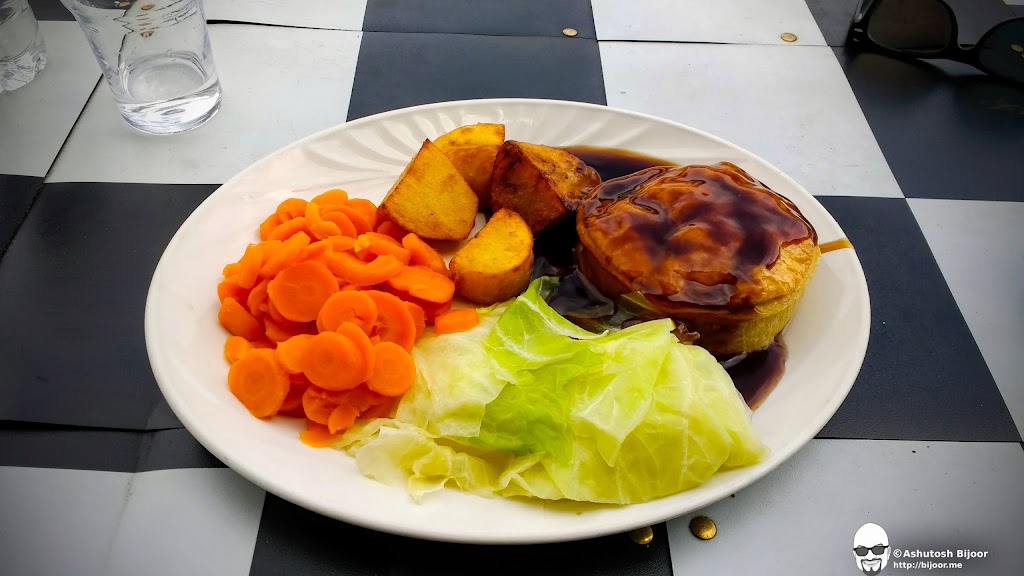 At Waltham, I stopped at a cute little family run restaurant - Tony's Mash and Pie to have a delicious lunch consisting of a Shepherd's pie, carrots, potato wedges, and cabbage. Yummy!!! 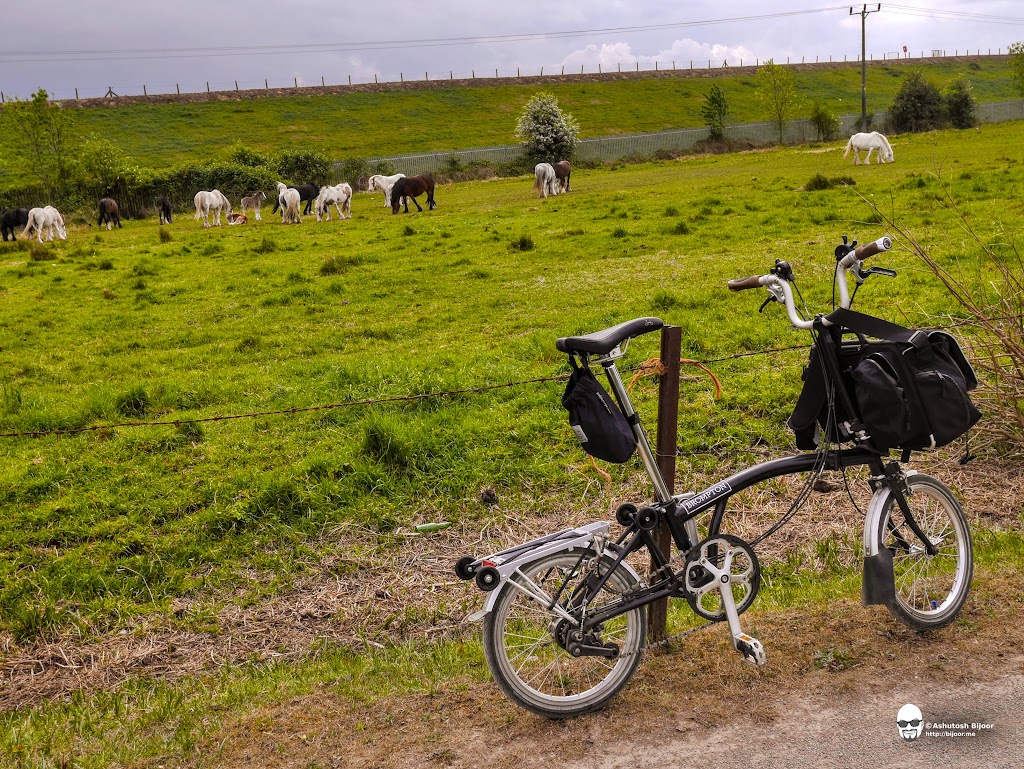 Further south after Waltham Abbey as I cycled towards Stratford, I passed a herd of horses grazing lazily in a grassy meadow along the river. 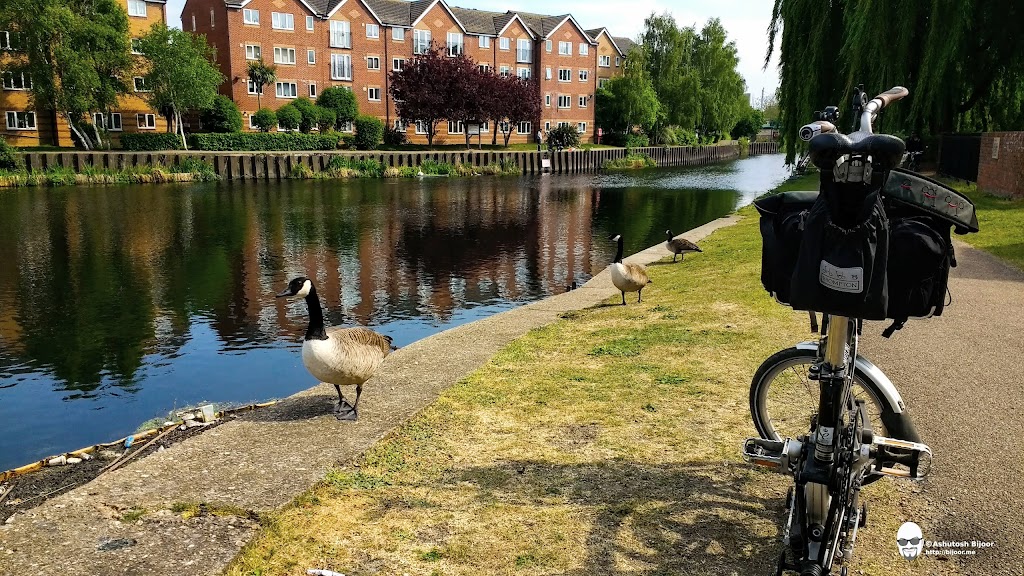 Further along the river, where Pymmes Brook merges into the Lea river, I stopped for a drink of water when a bunch of ducks walked over to say hello. 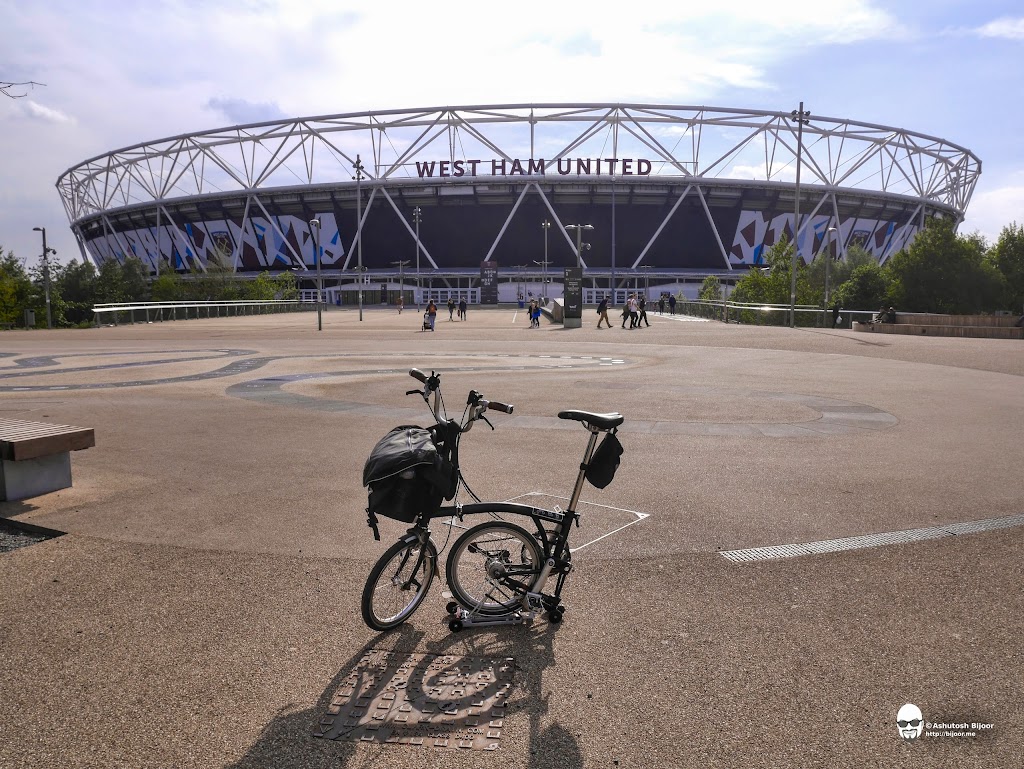 At Stratford, I went into the Queen Elizabeth Olympic Park adjoining the river. The first stop was the London Stadium, the home ground of West Ham United Football Club. It was constructed to serve as the home stadium for the 2012 Summer Olympics and Paralympics, hosting the track and field events and opening and closing ceremonies. It was subsequently renovated as a multi-purpose stadium (ref). 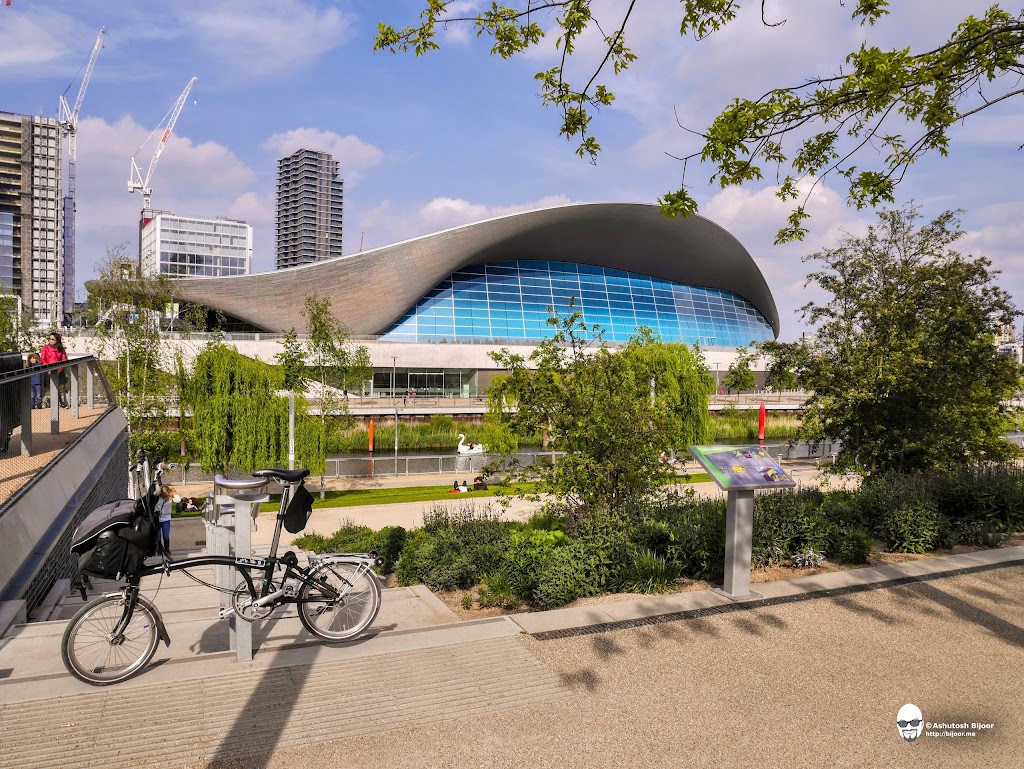 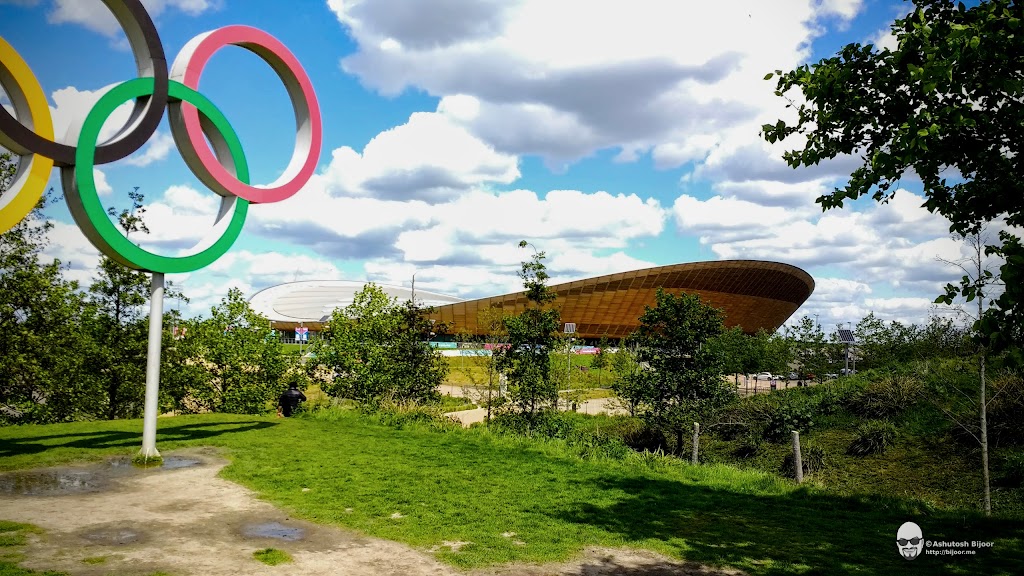 Another iconic sports venue located in the Olympic Park is the Lee Valley Velopark. It is a 6,000-seat indoor velodrome that is supposed to be the fastest track in the world. 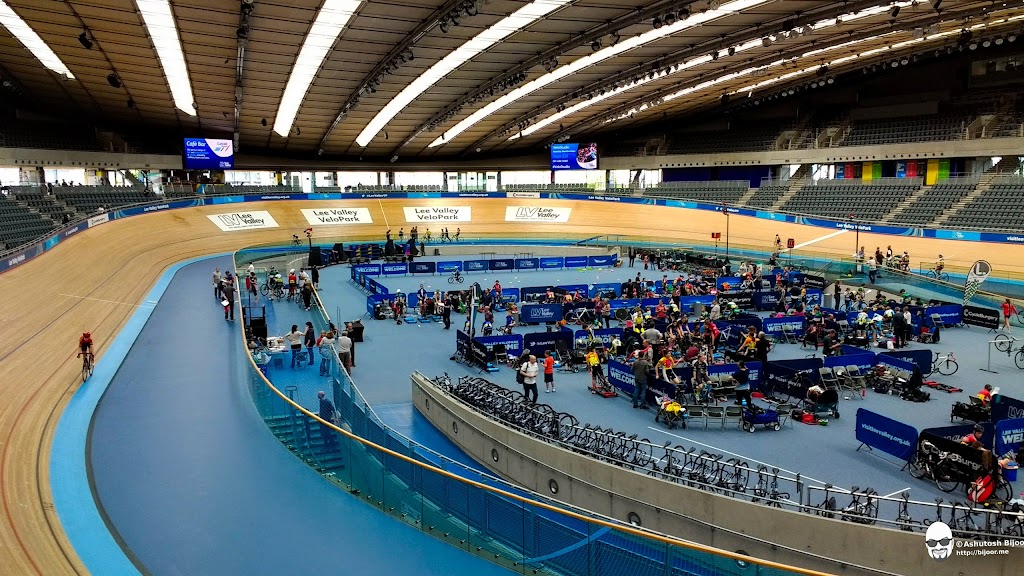 The velodrome is open to the public and anyone can try out an introduction to track cycling with a one-hour session or go through the four-stage accreditation course. Just outside the velodrome is a remodeled Olympic BMX track, with over 30 bumps, jumps, and berms. 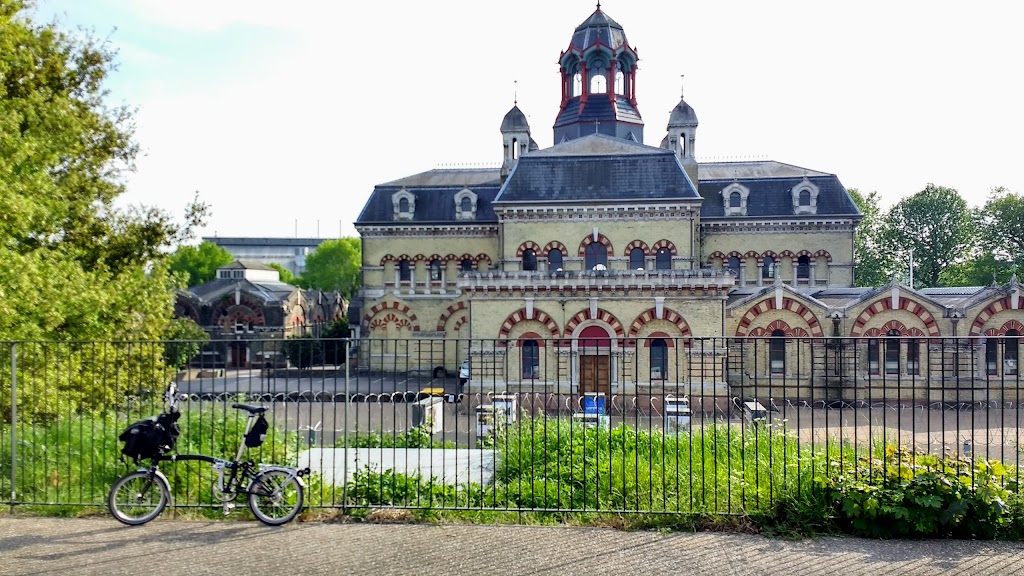 From Stratford, I took a detour along the London Greenway towards Barking. I paused for a few minutes to admire the Abbey Mills Pumping Station - designed by engineer Joseph Bazalgette, Edmund Cooper, and architect Charles Driver. It was built between 1865 and 1868 with an elaborate Byzantine style, described as The Cathedral of Sewage.(ref) 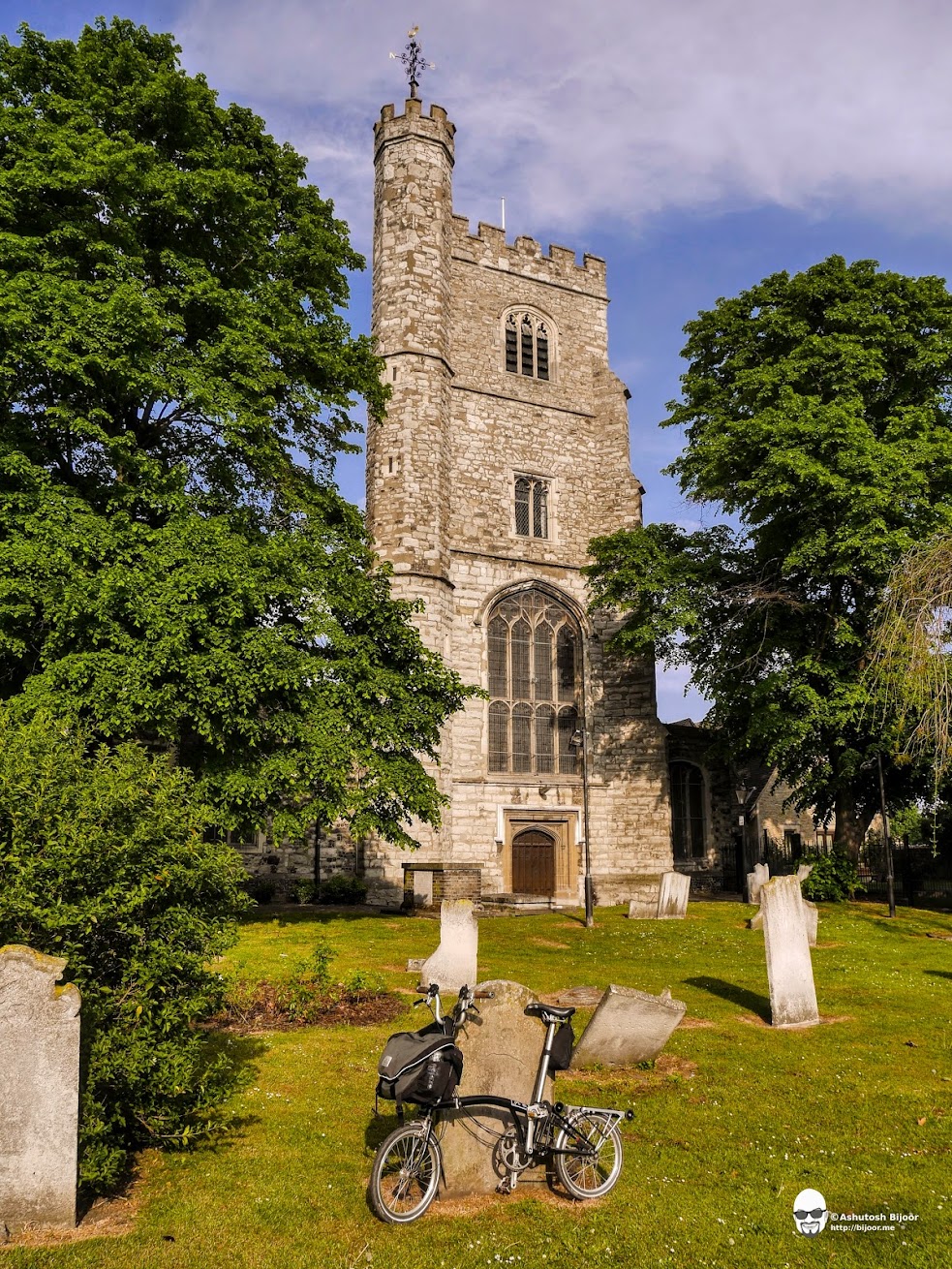 I reached Barking well in advance of our scheduled time for the dinner invitation and stopped at St Margaret's Church. It originated as a chapel for local people within the grounds of Barking Abbey, to the south of the Abbey church. Its oldest part is the chancel, built early in the 13th century during the reign of King John.(ref)

The day ended with a dinner and lots of chatting at Alfred's place in Barking!