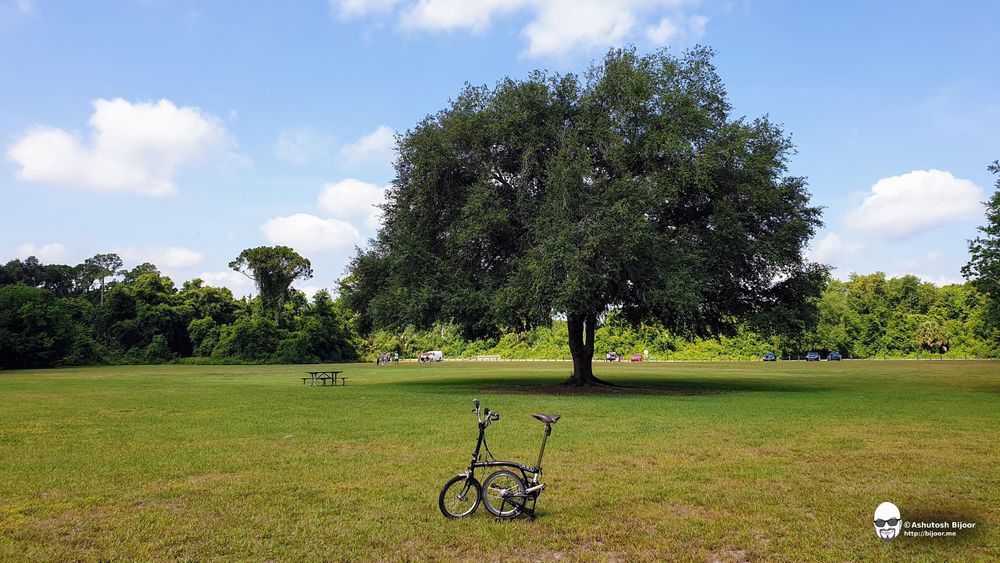 In the last few weeks, I had to back to back visits to the US, covering multiple cities - Orlando, Pittsburgh, Austin and San Antonio. In addition to a hectic but exciting schedule visiting customers and conducting technical work shops, I had my special companion - my folding Brompton bicycle. It allowed me to explore the cycling trails in the cities I visit.

Here is a list of the trails I covered:

My first destination was Orlando, where I stayed with Kinesh - our group CEO at his beautiful home in Sanford. Though I was there for just a few days at the beginning and end of my visit, I managed to ride along two of the trails in Orlando in addition to smaller rides around Sanford.

The Seminole Wekiva Trail has been built on the former Orange Belt Railway, at one time the longest railroad in the country (ref). This conservation initiative of converting old railroad tracks into trails is spearheaded by the Rails-to-Trails Conservancy, a nonprofit organization dedicated to creating a nationwide network of trails from former rail lines and connecting corridors to build healthier places for healthier people.

The north end of the trail is close to where I was staying, and hence was convenient for an evening ride. I covered only about 8.5 miles of the nearly 14 mile trail. It is a paved recreational trail that has been designated as one of Seminole County's showcase trails because of its length, beauty, and accommodation of many users.

Here is a short video I compiled for this ride:

And here is my route map:

At the end of my visit, I had to fly back to India from Orlando, and I took the chance to ride on another trail around the beautiful Monroe Lake. This is a 7 mile section of the Spring to Spring Trail. This is one of the most scenic portions of the route as is it traces the northwestern shoreline of Lake Monroe.

I rode up to the trail head at the Lake Monroe Park and then followed the Spring to Spring trail up to and inside the Gemini Springs Park.

Here is a short video compilation of my ride:

And here is my route map:

Pittsburgh is the location of Accion Labs' headquarters and we have a nice big open office located at Upper St. Clair. Declared as one of the coolest offices in Pittsburgh, it is not very far from the trail head of the famous Montour Trail.

The Montour Trail follows a portion of the old Montour Railroad, which was built between 1877 and 1914 to link the Pittsburgh and Lake Erie Railroad with the region's many coal mines. Both the trail and the railroad are named for the creek that runs alongside.

The Montour Trail stretches 60-plus miles around Pittsburgh — the longest suburban rail-trail in the U.S. I started my ride on the section of the Montour Trail known as the Arrowhead Trail that begins in Bethel Park and runs southwards to join the Peterswood Park, and then turns west to continue on the Montour Trail.

I was accompanied by my colleague from Accion Labs - Hemesh and we were invited to dinner to Sandesh's place at Oakdale. Our plan was to ride along the Montour trail and then branch off to the Panhandle trail just before the McDonald Trestle. But that was not Hemesh's lucky day!

Just as we reached the trail head and started the ride, Hemesh noticed a flat tire! We then spent a good hour and a half trying to get a replacement inner tube. We bought two new inner tubes at Dick's Sporting Goods, hoping that the technician would be able to replace the punctured tube with a new one. But the technician happened to lose his tire levers and gave up. I had tire levers in my hotel nearby, so we went to my hotel room and replaced the tube. But the tire just would not hold air! So we removed the tube, and it already had a hole in it. Luckily we had a second tube. But before trying to fit it in, we checked if that was ok. And guess what - even the second new tube was punctured!!! This spate of bad luck for Hemesh continued beyond this, but that's another story!

Luckily there was another cycle store nearby - Pro Bike+ at South Hills. There, we managed to get another spare tube and got it fixed. And after a two hour delay, we finally got back and started the ride!

The ride was beautiful! The highlights of the ride were the two tunnels, the creek running alongside, the old railway caboose and several cute installations by residents along the trail!

Here is a video covering the ride:

And here is the route we took:

>> Click here to see the videos of my trail rides in San Antonio, covering the river walk and the famous San Antonio Missions!