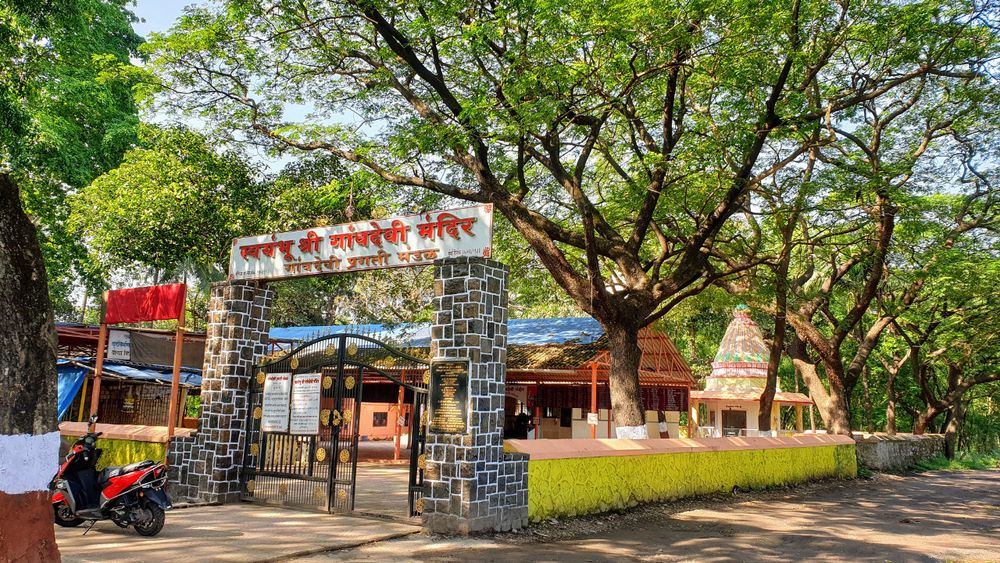 After exploring the various forts and other historical places in and around Mumbai, it was time to find a new set of adventures to cycle to. I came across an interesting article in the Hindustan Times titled "Meet nine lesser-known goddesses of Mumbai" and found it very interesting that though I knew some of the listed Goddesses, there were quite a few that I did not know about nor had ever visited... so that's my new weekend quest - explore and visit all the Goddesses of Mumbai!

I first created a map of various Goddess Temples in Mumbai that I could find in the article above and from other sources. And for the first ride, I chose the locations closest to home - Andheri, Powai, Goregaon and Jogeshwari.

The six temples I visited were: Ensconsed in a mango orchard at one corner of the IIT Powai campus adjoining the Powai lake is the Sridevi Padmavati Devi Temple. The name of the area - Powai - is derived from the name of this Goddess. In the book "Monastery, Sanctuary, Laboratory: 50 Years of IIT-Bombay" By Rohit Manchanda, he writes:

In the summer of 1965, a walker pottering about the dried-up bed of Powai Lake stumbled upon a stone inscription dating back to the 10th century A.D. The inscription recorded the gift of the surrounding terrain as agricultural land for the maintenance of a Shia temple. The donor was recorded as a Mahasamant (a military and administrative commandant) named Simhapa. The deity depicted on the slab was named Nagajeshwar, and a village called "Poumvi" was mentioned on it. "Poumvi" was conjectured to be a rounded-off form of the name of the village's presiding deity, Devi Padmavati; and Poumvi itself, in course of time, was rounded off into "Powai" 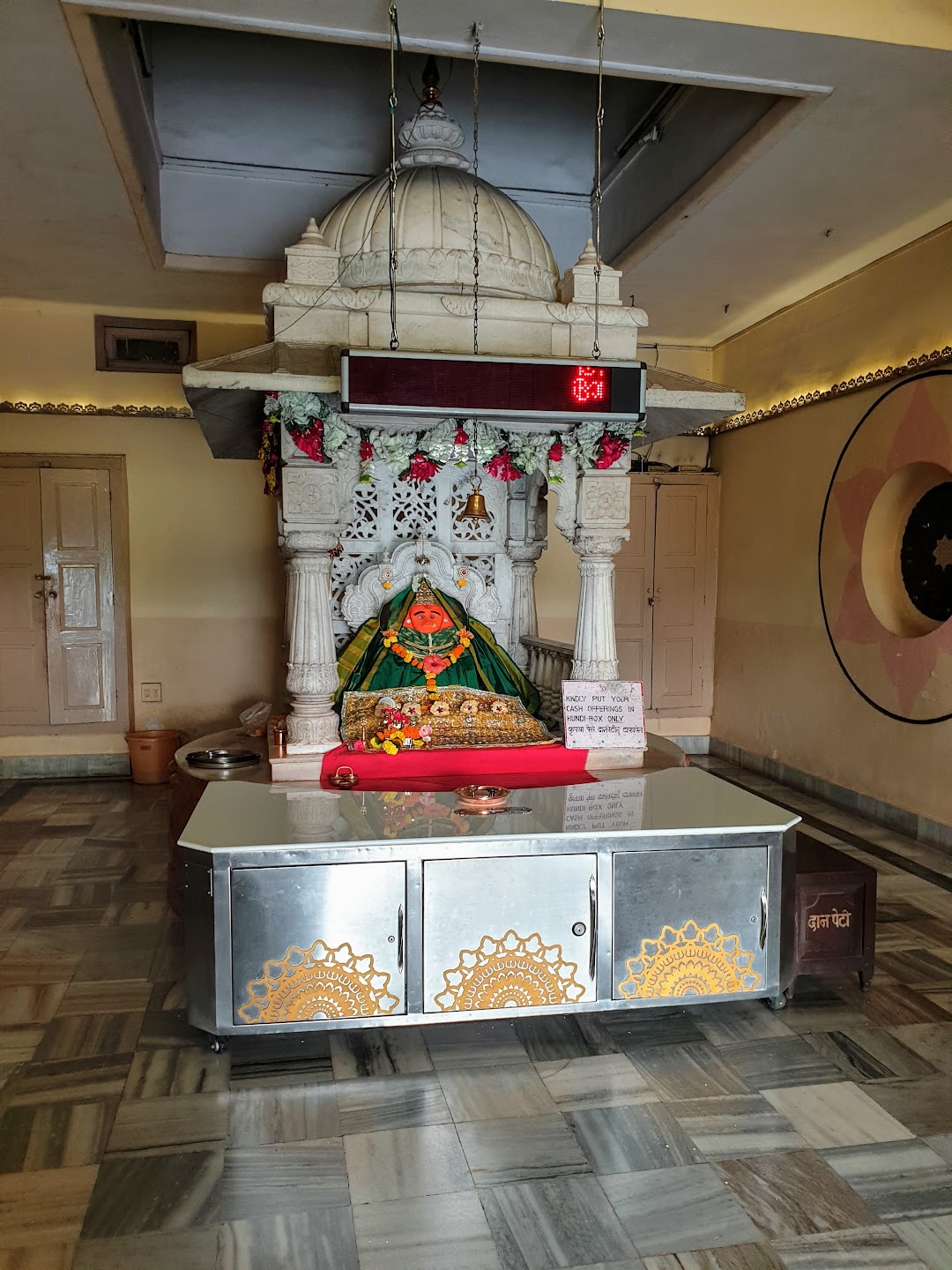 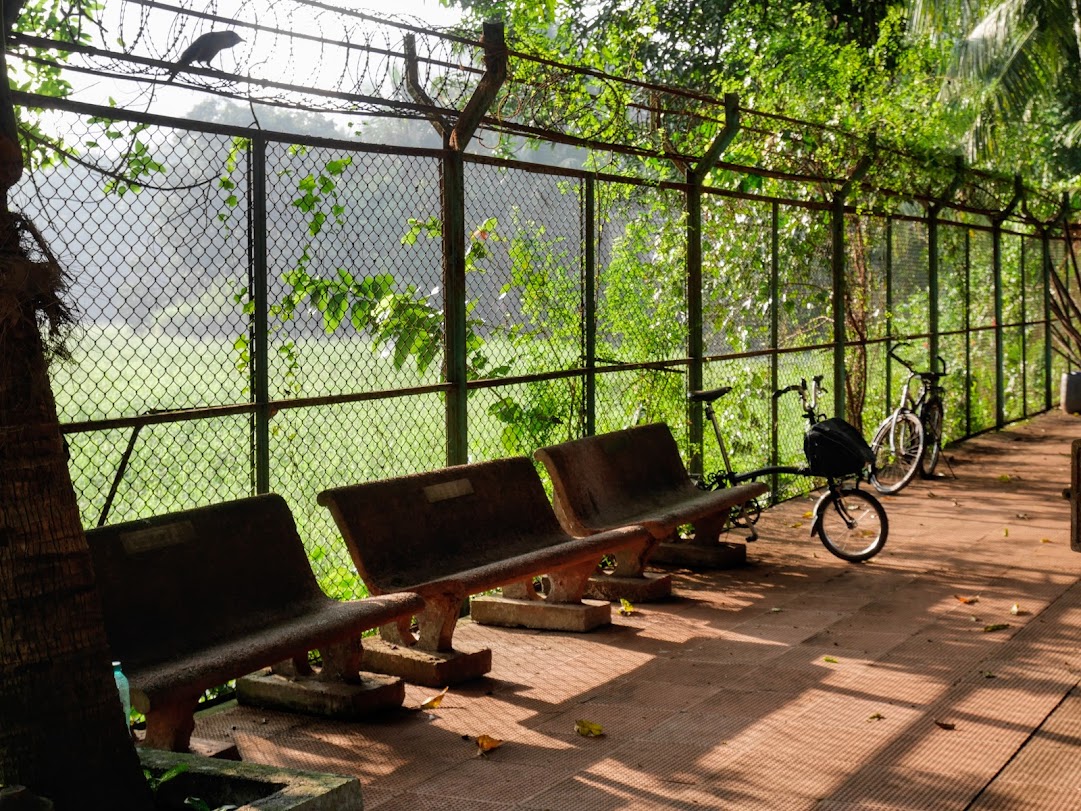 The temple is located on a peninsula that juts out into the lake. The early morning sun's rays directly light up the idol in the temple that faces east. 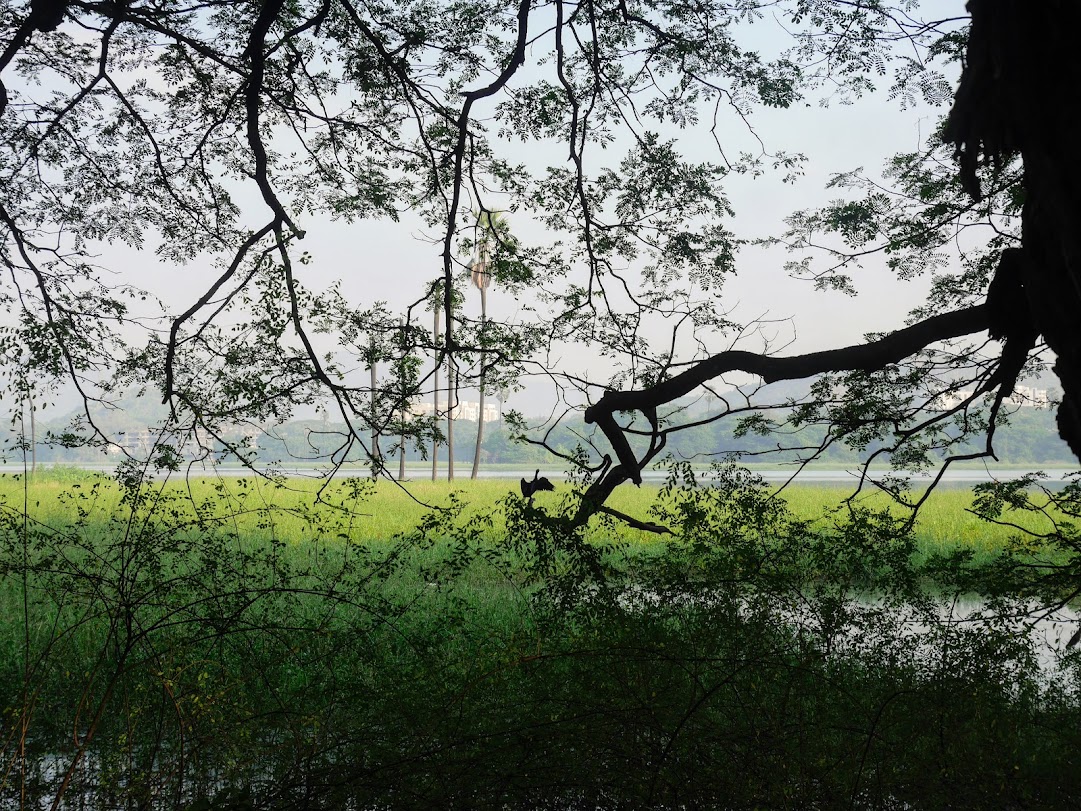 I had been to IIT Powai several times in the past. But I did not know of this temple, and had never visited it before. What a great find! A great location for an early morning walk or ride! 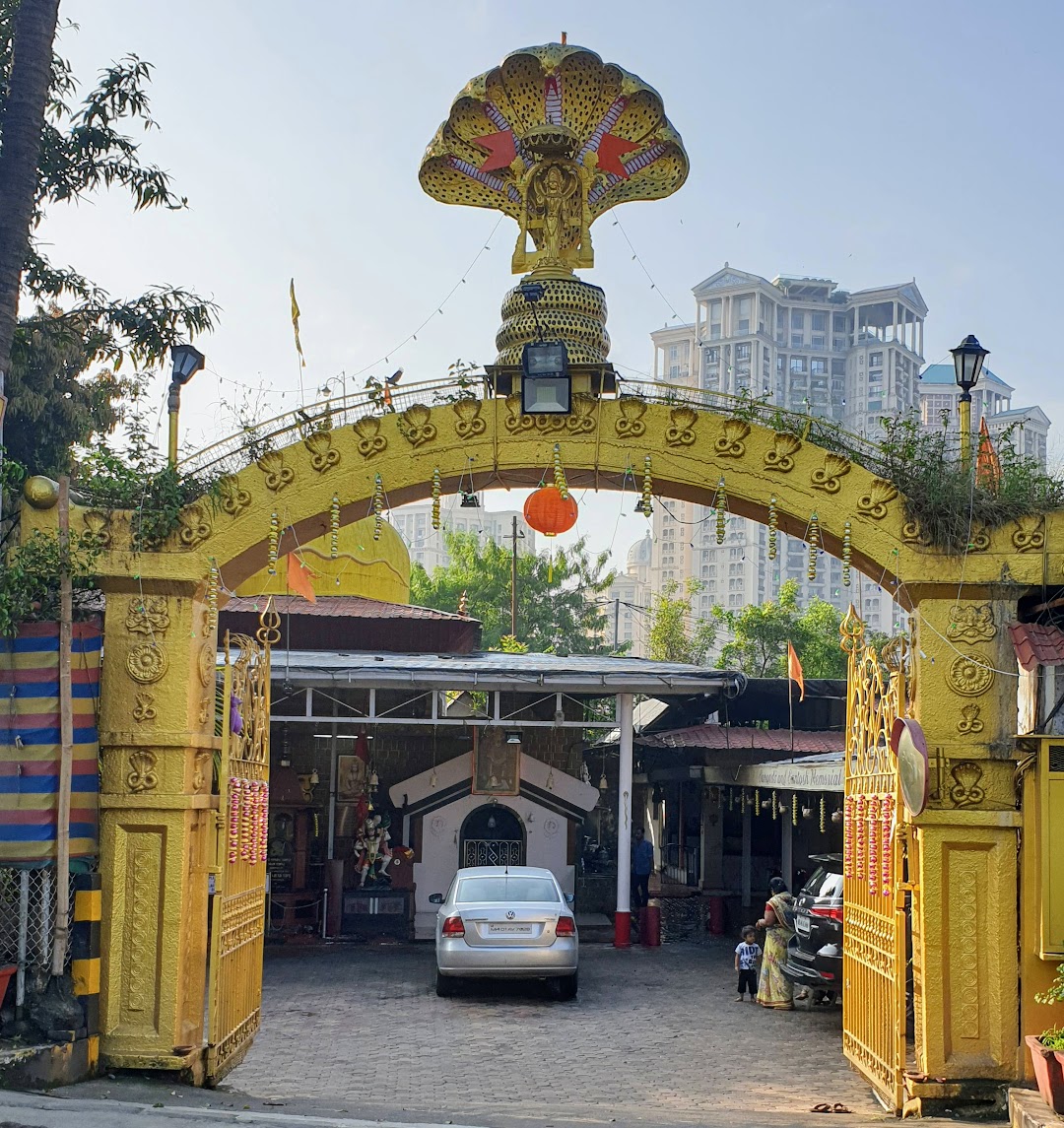 Suvarna Temple is quite a unique place of worship. Established by the revered Shree Shree Shree Suvarna Baba in 1957, it has signs everywhere to invite devotees from all religions and indeed it is known for this unique feature! 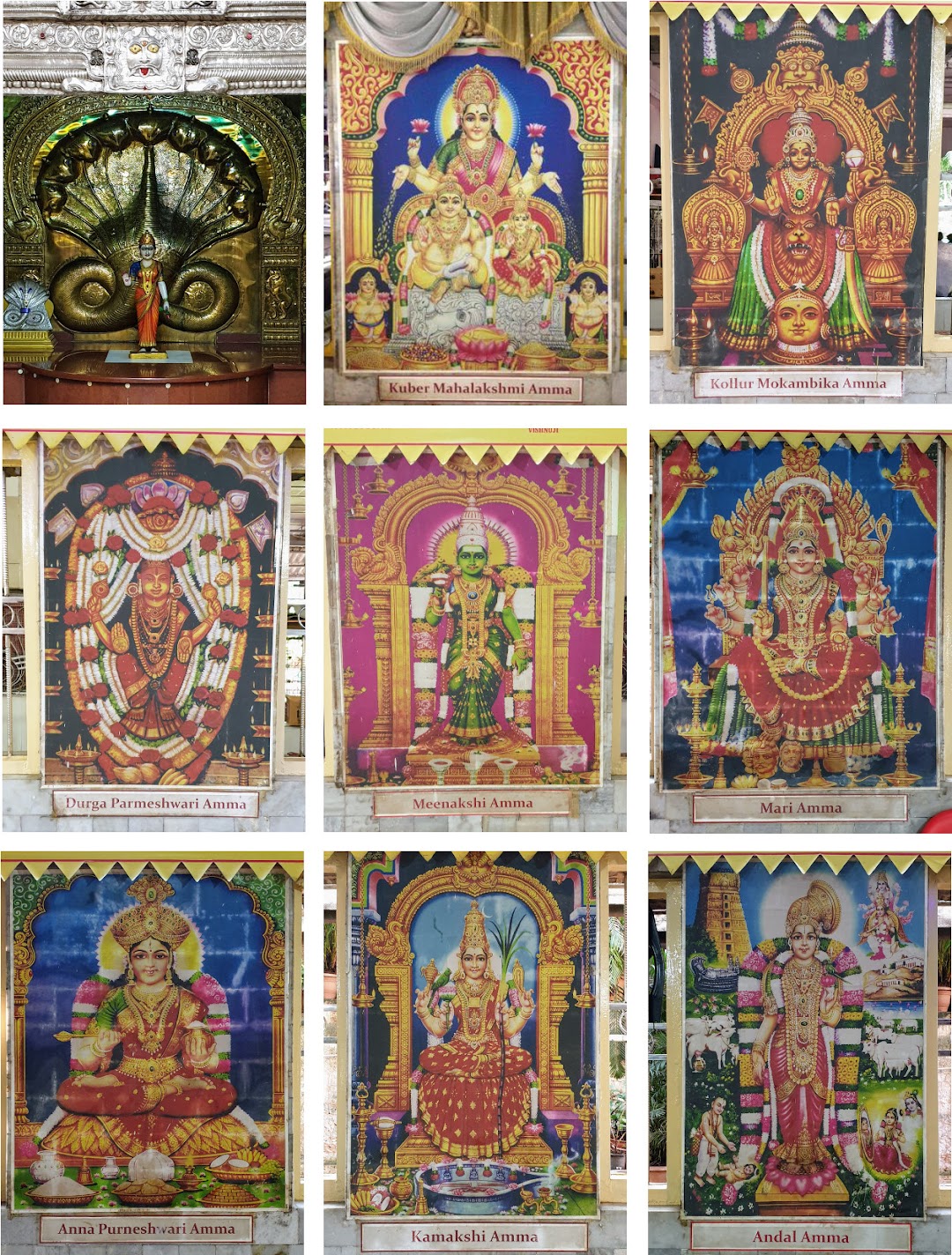 Though the formal name is Shree Mahashesha Rundamalini Temple, there are nine goddesses that are worshipped here. The top left is the main idol while the others are pictures all around the temple walls The entrance to the temple has these ornately carved golden pillars on either side. 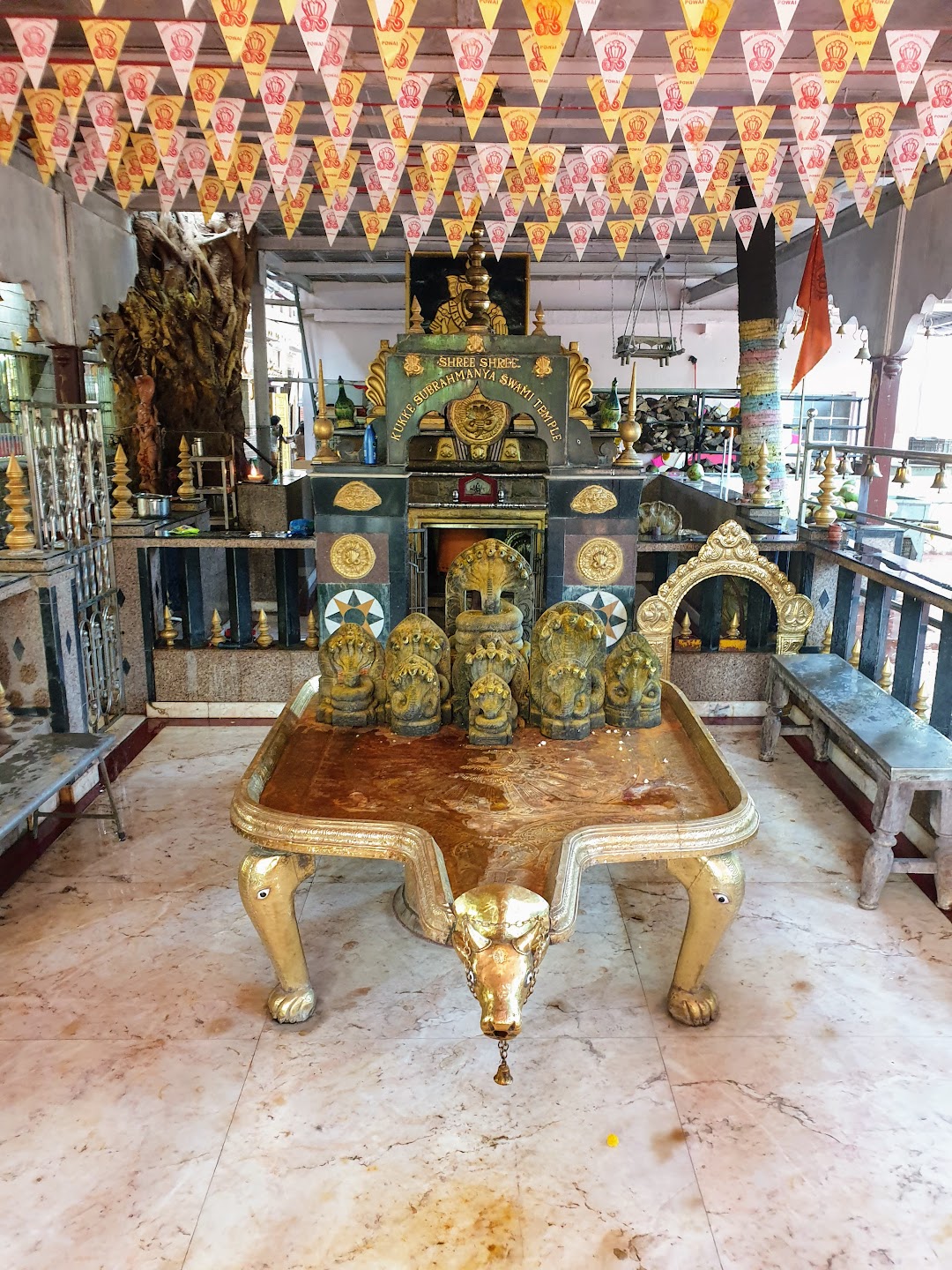 The entire compound is filled with closely packed temples to other Gods and Goddesses. From Powai, I rode into Aarey Milk Colony and visited the Maroshi Adivasi Gaondevi Temple located near the Picnic Garden. 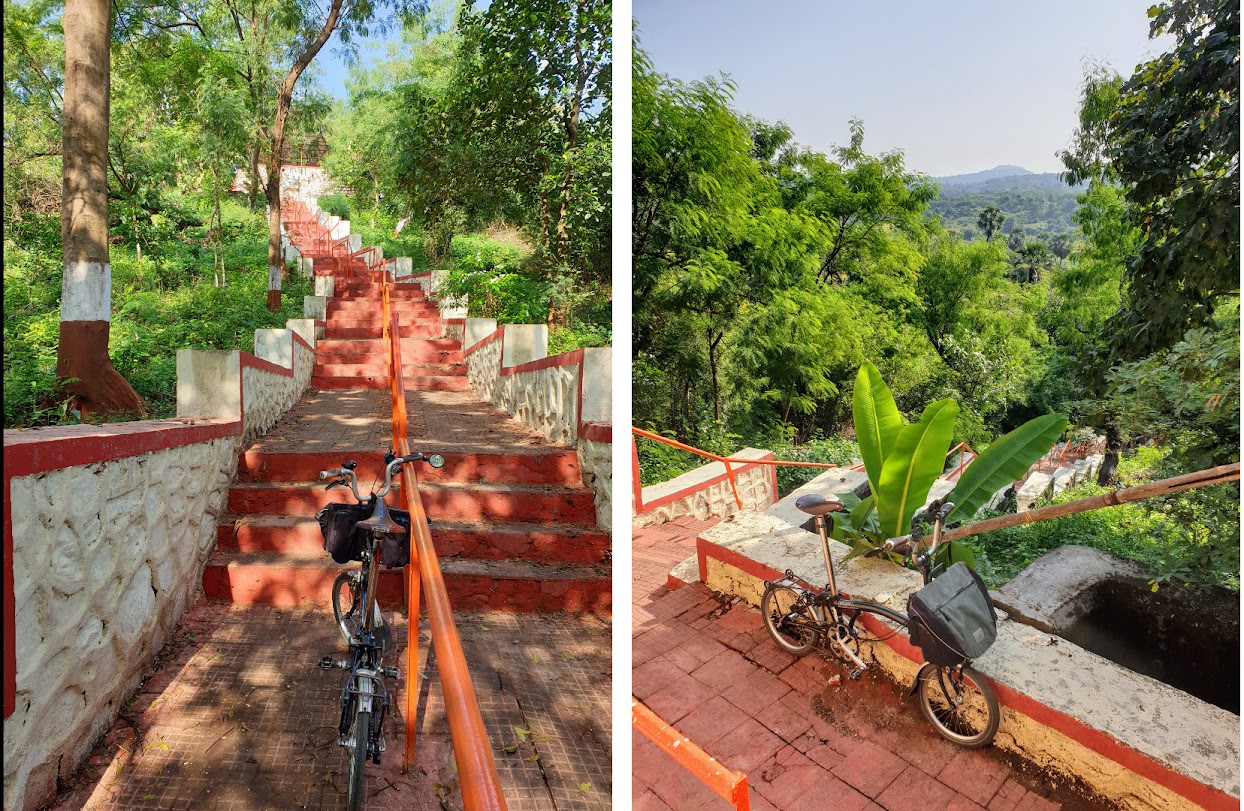 The temple is on top of a small hillock with steps leading up from the base of the hill. The view from the top shows the Aarey colony and the National Park extending to the horizon! Let's hope this forest remains safe from the greed of the city! 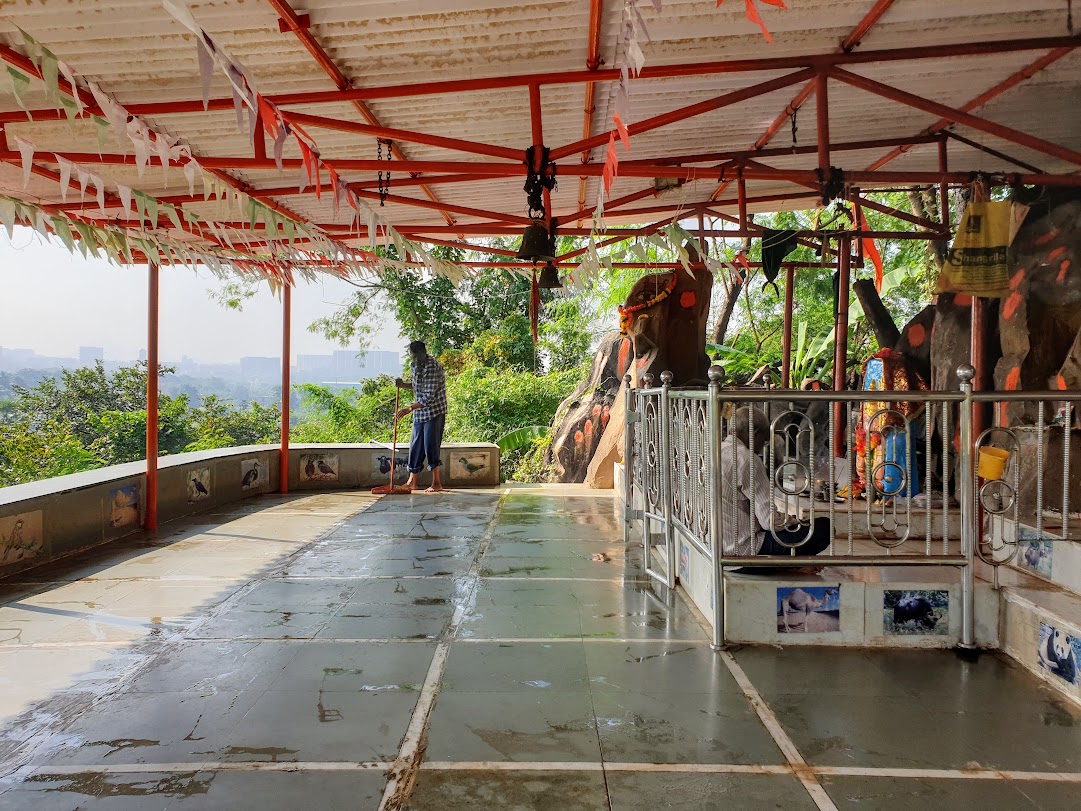 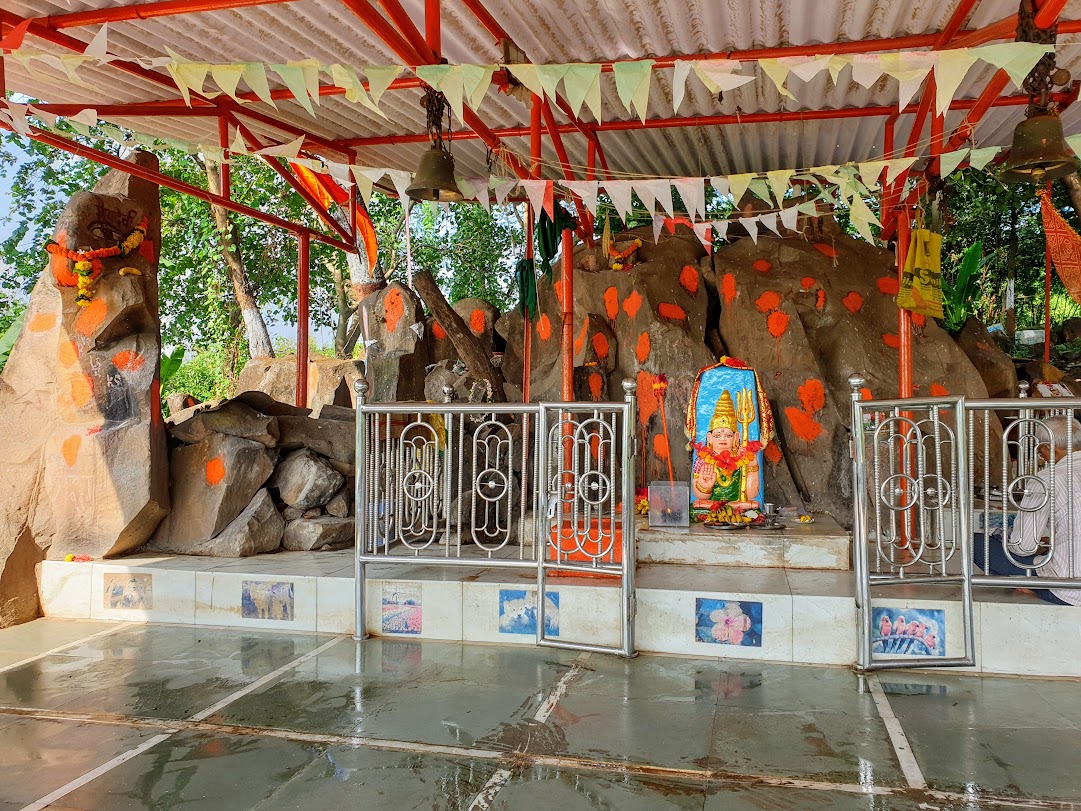 The deity is nestled in the midst of a rocky mound. Two men from the village were carefully cleaning the temple, decorating the idol and started praying in a soothing voice while I was enjoying the place. 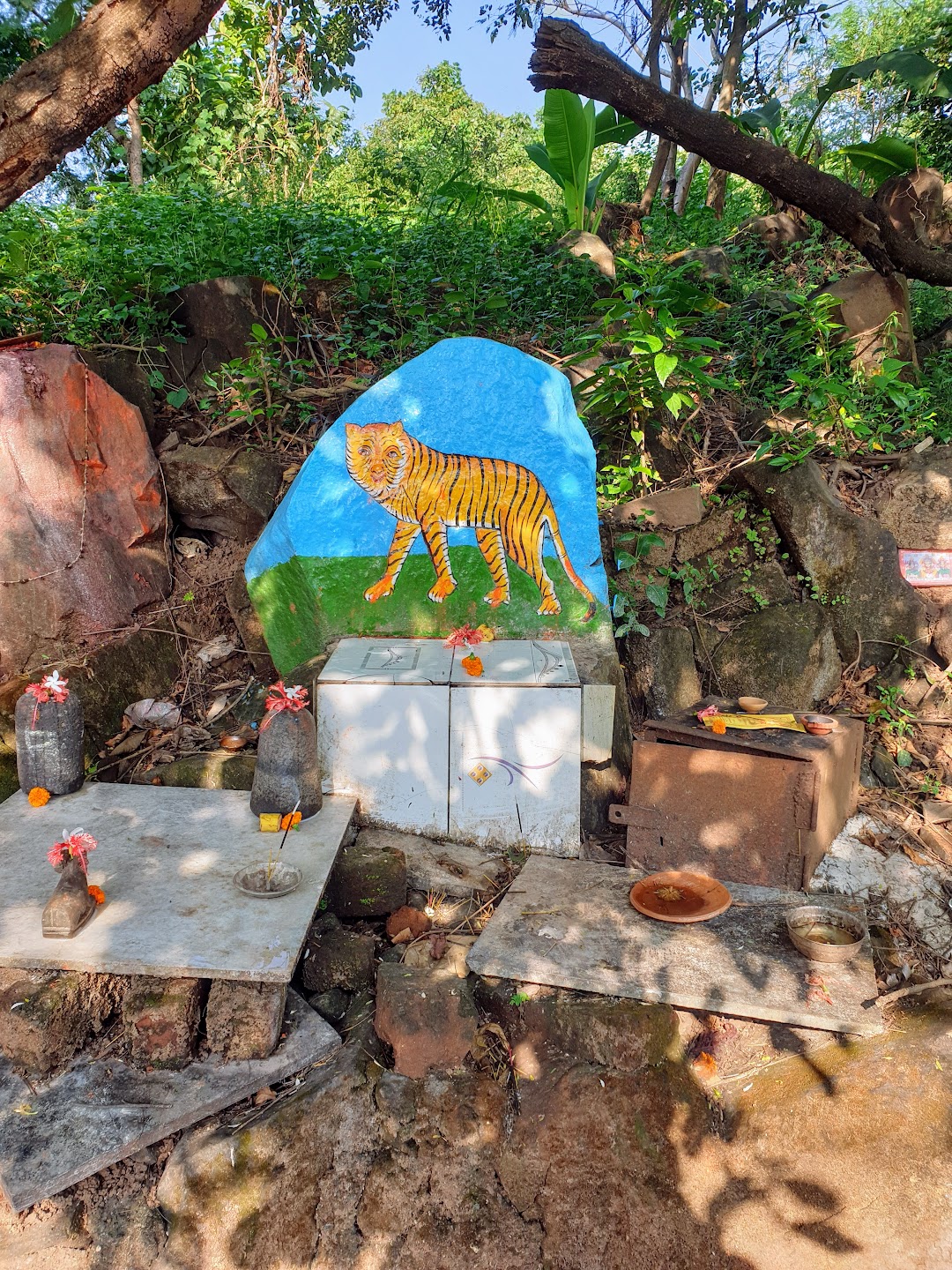 Another unique feature of this temple is the deity of Vaghoba - the tiger God symbolizing the respect that the villagers have for wild life. Aarey forest is known to have several leopards! Another temple of a village deity is located closer to Goregaon in the Aarey Milk Colony, not too far from the lake commonly called as Chota Kashmir. 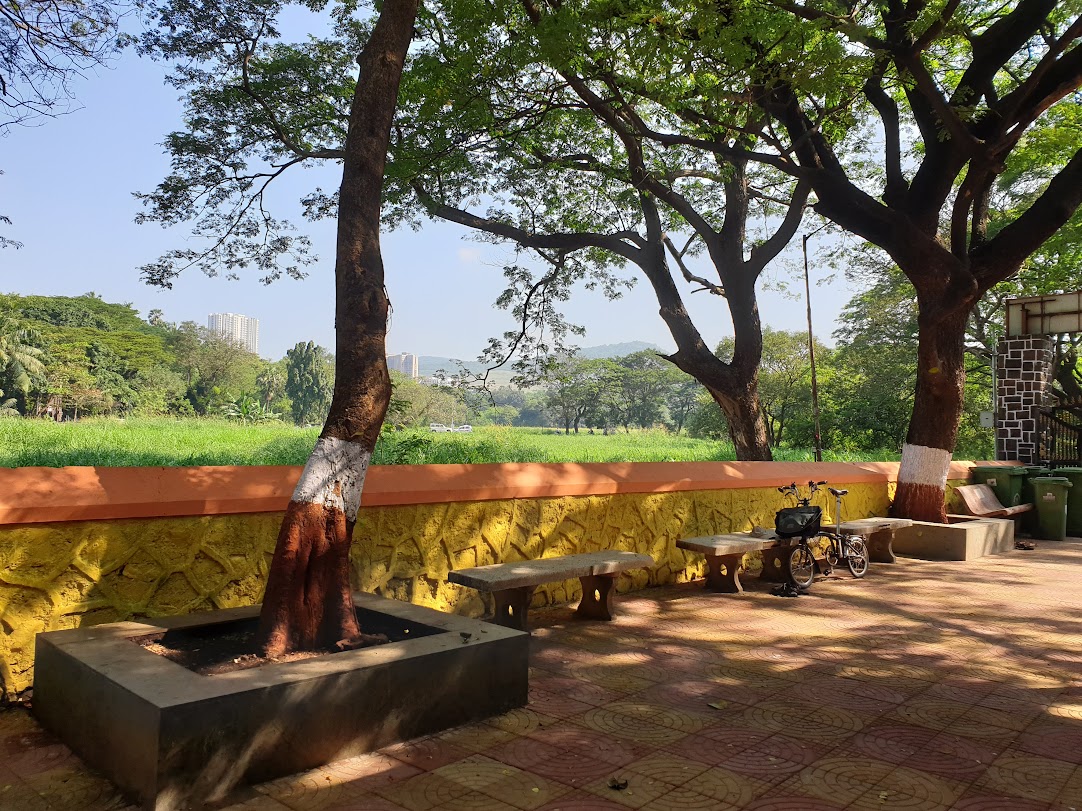 The temple is well maintained and is in a compound that is maintained by a committee - Gaondevi Pragati Mandal, who also organize various religious events at the temple. 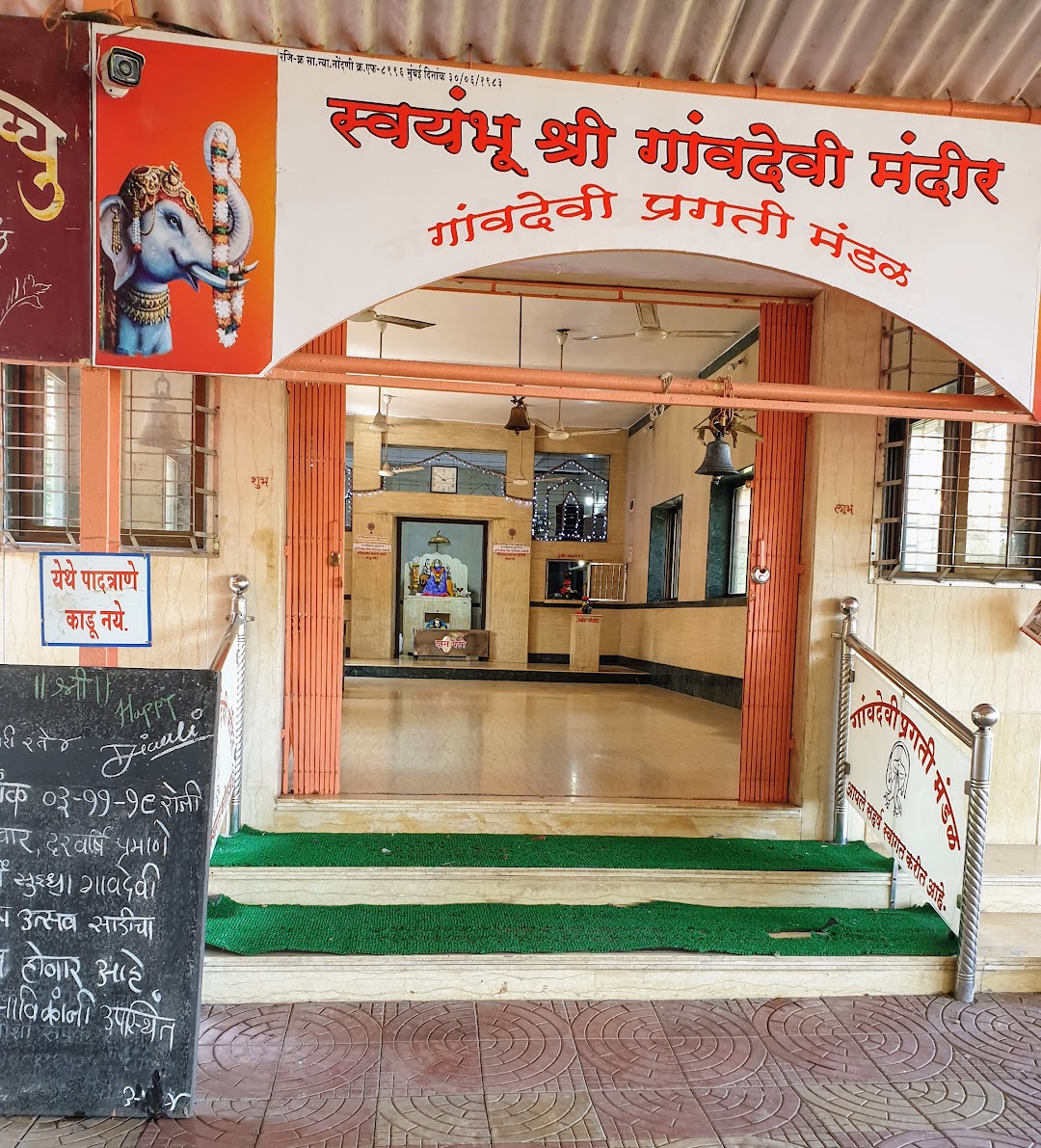 The main temple is dedicated to the Goddess, while smaller temples located in the compound are dedicated to Hanuman, the monkey God, Sai Baba - the seer from Shirdi, and two other local Goddesses. Goddess Waghjai Devi on the left, is typically depicted as sitting on a tiger and having eight hands - similar to Durga. She is said to protect the village from natural disasters. There is a big temple in Thane dedicated to this Goddess. She is also sometimes referred to as Wyaghreshwari Devi or Wyaghrambari Devi (ref)

The Goddess Vithalai to the right seems like a version of "Vithai" - a fond name given to the God Vithal - or Vithoba. Vithoba is commonly considered as a manifestation of the God Vishnu or his avatar, Krishna. Vithoba is often depicted as a dark young boy, standing arms akimbo on a brick, sometimes accompanied by his main consort Rakhumai.

The religious historian R.C. Dhere, winner of the Sahitya Akademi Award for his book Sri Vitthal: Ek Mahasamanvaya, opines that Vithoba worship may be even older—"Vedic or pre-Vedic", hence pre-dating the worship of Krishna. According to this theory, Vithoba is an amalgam of various local heroes, who gave their lives to save their cattle. He was first worshipped by the Dhangar, the cattle-owning caste of Maharashtra (ref).

Vithoba is associated with "compassion, an infinite love and tenderness for his bhaktas (devotees) that can be compared to the love of the mother for her children... pining for the presence of his devotees the way a cow pines for her far-away calf (ref).

Due to this aspect of motherly love, Vithoba is also fondly referred to as Vithai - combinbing Vithal and Aai (Mother). And Vithalai seems to be a similar derivation. 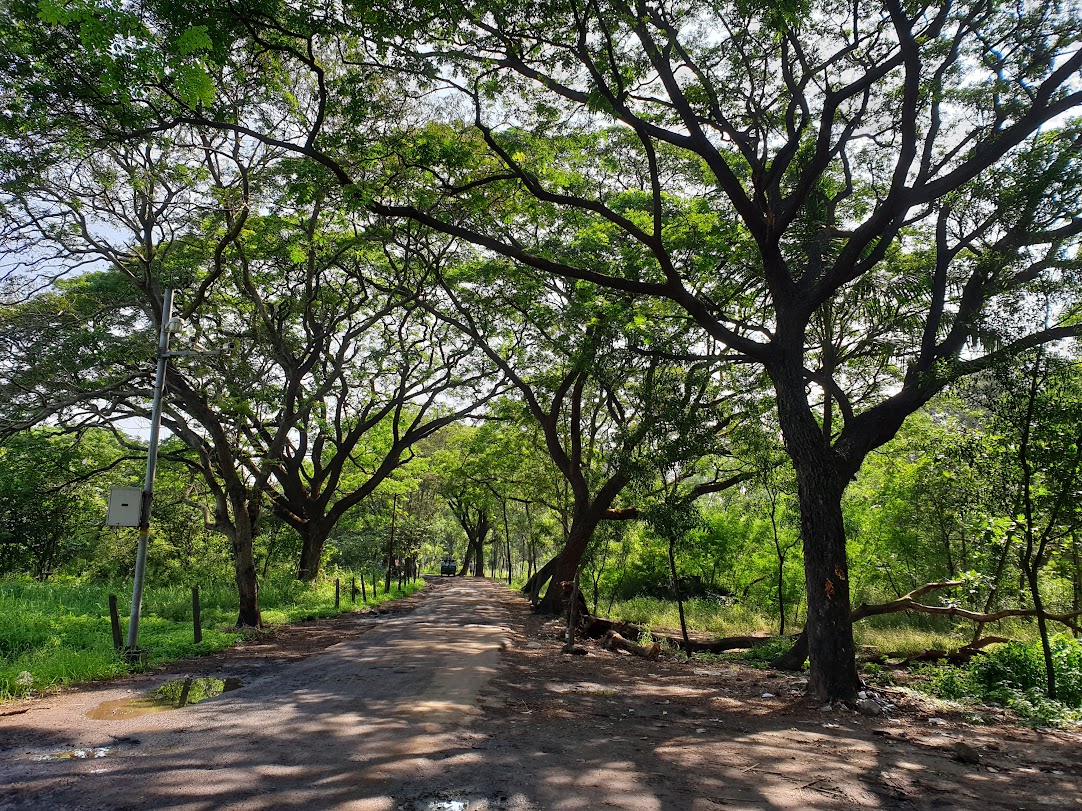 There is a small tarred road that leads to the temple from the main Aarey Road, that is lined with shady trees. 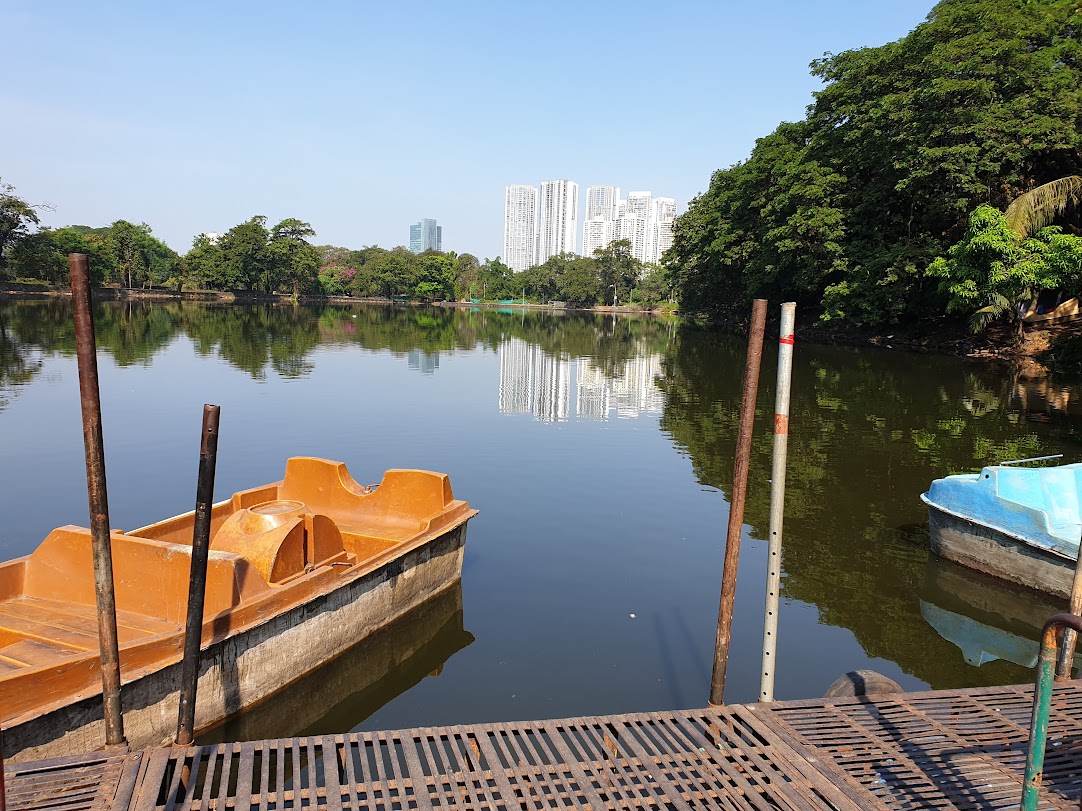 And the lake commonly referred to as Chota Kashmir is an attraction for evening visitors from Goregaon East, a suburb that is close enough for people to walk. The Kallol Kali Mandir is a well known location for the annual Durga Pooja held here by the Kallol group, a social and cultural organisation. In 2019, it would have completed 55 years of celebrations (ref)!

(Picture: Kali trampling Shiva. Chromolithograph by R. Varma)
In the book "Hindu Goddesses: Visions of the Divine Feminine in the Hindu Religious Tradition" By David Kinsley, he describes Kali as follows:

The goddess Kali is almost always described as having a terrible, frightening appearance. She is always black or dark, is usually naked, and has long, disheveled hair. She is adorned with severed arms as a girdle, freshly cut heads as a necklace, children's corpses as earrings, and serpents as bracelets. She has long, sharp fangs, is often depicted as having clawlike hands with long nails, and is often said to have blood smeared on her lips. Her favorite haunts heighten her fearsome nature. She is usually shown on the battlefield, where she is a furious combatant who gets drunk on the hot blood of her victims, or in a cremation ground, where she sits on a corpse surrounded by jackals or goblins.

(Picture: The Goddess Ambika Leading the Eight Mother Goddesses in Battle Against the Demon Raktabija, Folio from a Devi Mahatmya)
The Devi Mahatmyam or Devi Mahatmya (Sanskrit: devīmāhātmyam, देवीमाहात्- म्यम्), or "Glory of the Goddess") is a Hindu religious text describing the victory of the goddess Durga over the demon Mahishasura. As part of the Markandeya Purana, it is one of the Puranas or secondary Hindu scriptures, and was composed in Sanskrit around c. 400-500 CE, with authorship attributed to the sage (Rishi) Markandeya (ref)

Kali may be understood to represent or "aspect" the darker, chthonic, transformative qualities of Devi's power or Shakti. Kali's emergence is chronicled in the third story of the Devi Mahatmya. Kali emerges from Devi's eyebrows as a burst of psychic energy. Kali overpowers and beheads Chanda and Munda, and when she delivers their severed heads to Devi, she is dubbed Chamunda (ref)

(BTW, the word chthonic is not misspelled - it is an adjective meaning relating to or inhabiting the underworld and is commonly used in Chthonic Deities - the dreaded deities of the underworld, who are so feared that they usually are nameless and are called only by euphemisms (ref)) 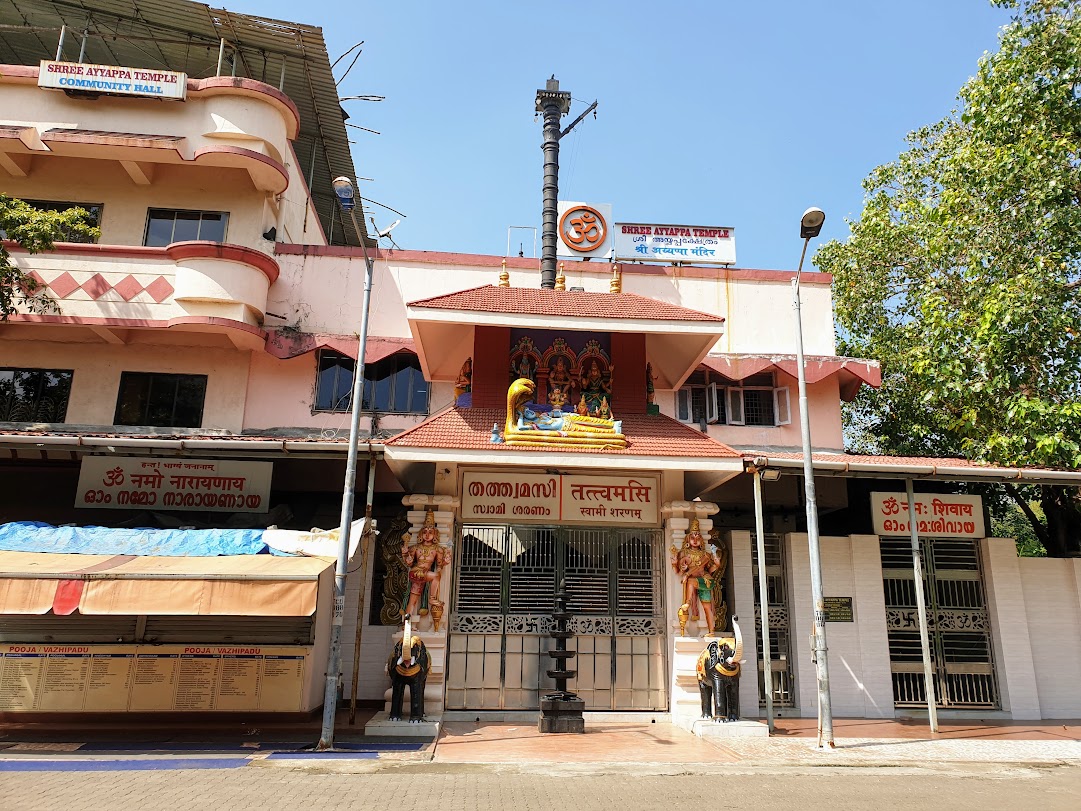 The Kallol Kali Mandir is located very close to the famous Ayappa Temple in Bangur Nagar. Worth doing a joint visit! 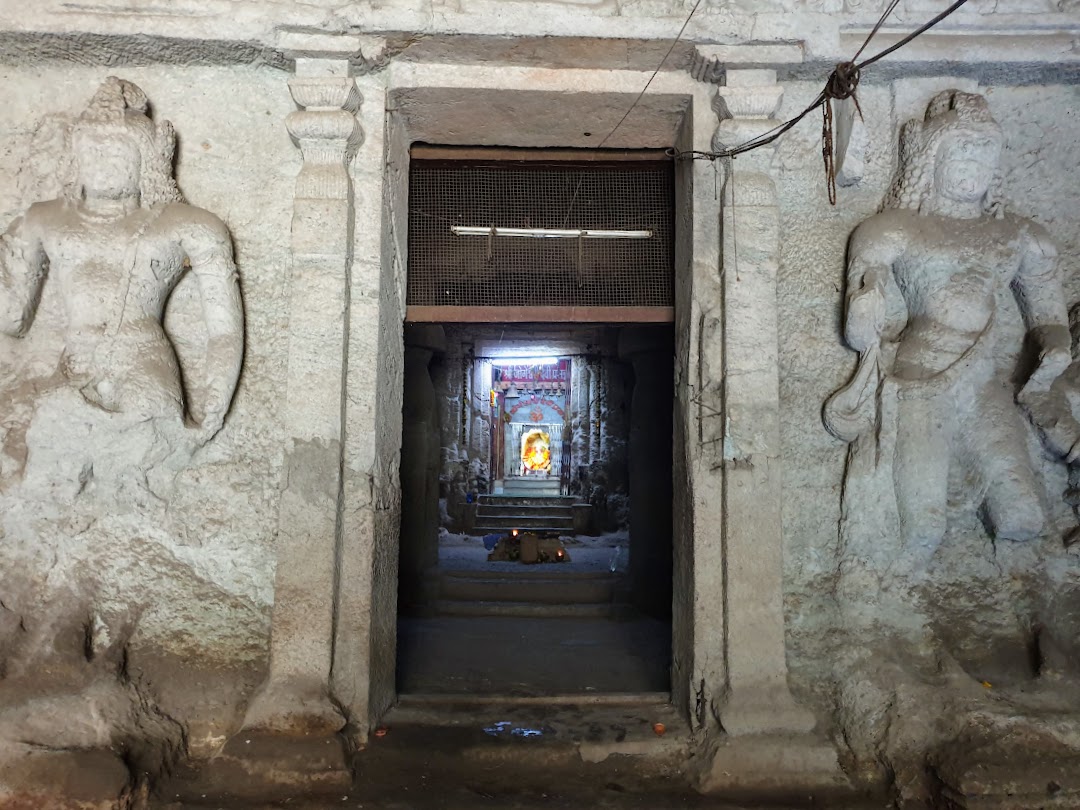 These caves are considered to be the oldest Hindu cave complexes in the region, dating around 500 CE. Historians Walter Spink and Dr. Arvind Jamkhedkar believe that these caves were built by the same artisans and sculptors who built the famous Ajanta caves near Aurangabad. One of the carved panels in the caves depicts the Sapta-matrikas or the seven Goddesses associated with Lord Shiva. Goddess Jogeshwari was one of them.

Incredibly, there is another cave temple of Goddess Jogeshwari near Ajanta, in a village called Ghatnandra. There too, there are caves within which the Goddess Jogeshwari is worshipped (ref). Closer to Mumbai is locaterd the temple of Yogeshwari Devi at Ambejogai in Beed district, close to the Kondhane Caves (ref). 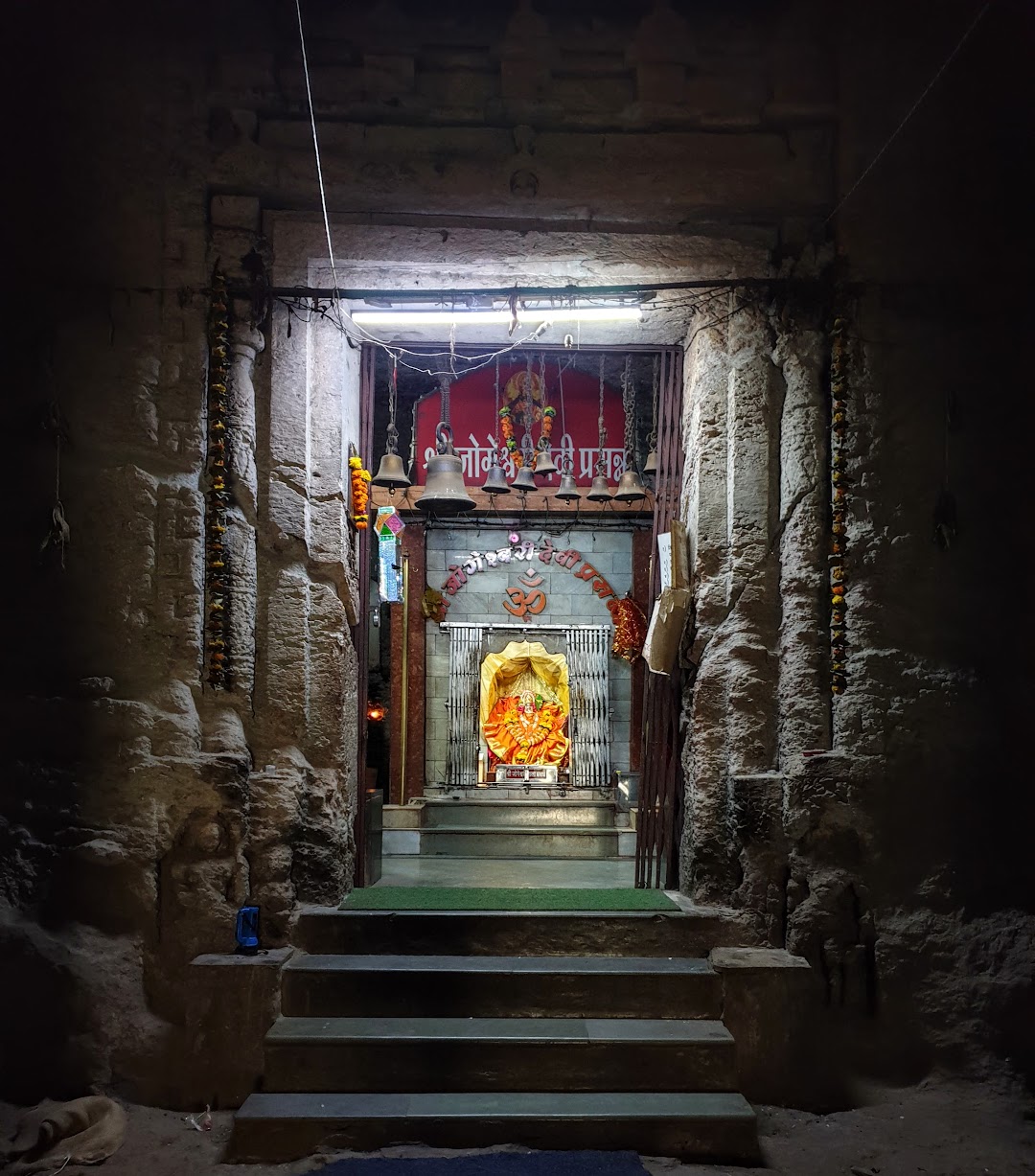 Jogeshwari Devi is also considered to be an incarnation of Goddess Durga. The ancient manuscript - the Varaha Purana refers to Goddess Yogeshwari who leapt from the flames emanating from Shiva's mouth (ref) 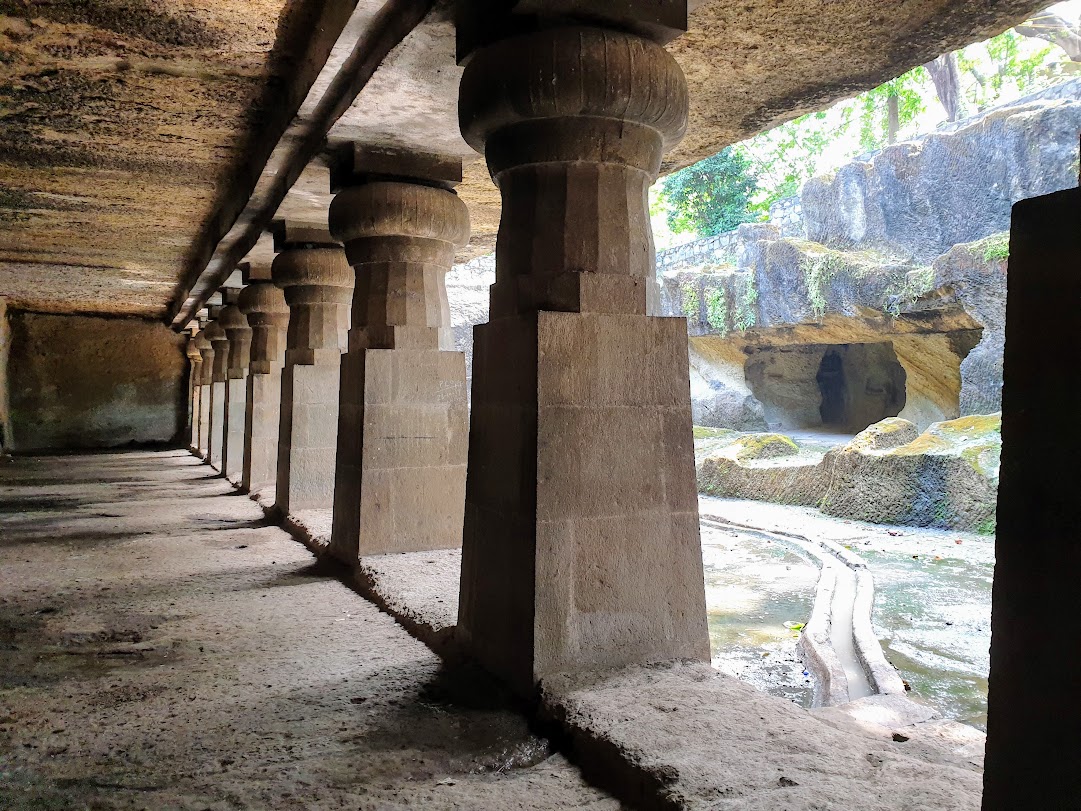 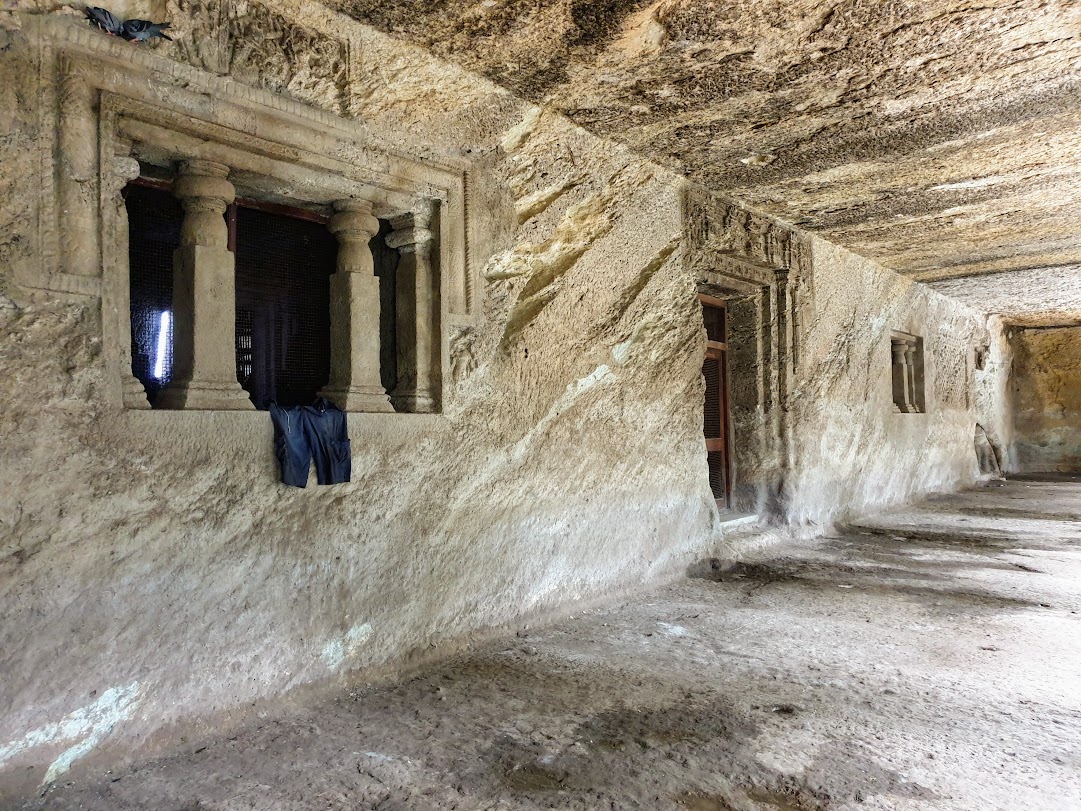 The temple complex is a huge cave that is excavated under a rocky hillock located at the junction of the Jogeshwari-Vikhroli Link Road (JVLR) and the Western Express Highway (WEH). The entrance to the caves is hidden in a small lane among the slums, and does not have any space for parking vehicles. The best way to get there is by bicycle or to walk. 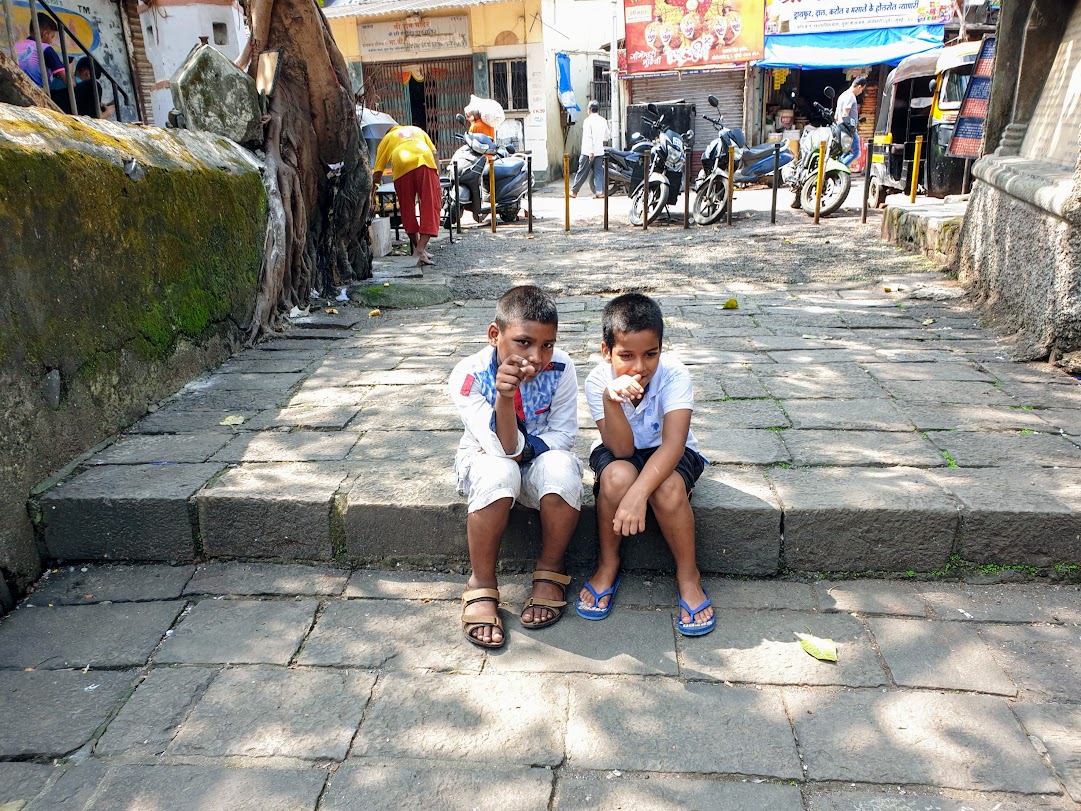 This was my last stop for this ride, completing six different Goddesses of Mumbai!

In case you're interested, see the other explorations in the series:

Looking forward to continuing this adventure and visiting the other Goddesses of Mumbai! Do share in comments in case you know of any additional locations of temples dedicated to Goddesses in and around Mumbai!