Vandri Lake is the second of the three lakes that are along the Mumbai Ahmedabad highway NH8. It is located near Saphale. The first one is Pelhar lake near Virar, and the third one is Kurze reservoir near Dapchari. I cycled to Vandri first in 2014 when I started my exploration of lakes in and around Mumbai, and found an idyllic lake that was rarely visited by tourists and other visitors. I repeated the route another time in 2016 to practice open water swimming in preparation for the Goa Triathlon.

Cycling along NH8 provides several locations that one can visit, at various distances from Mumbai in the following order:

I have visited all these at various times either by cycling, for trekking or both. 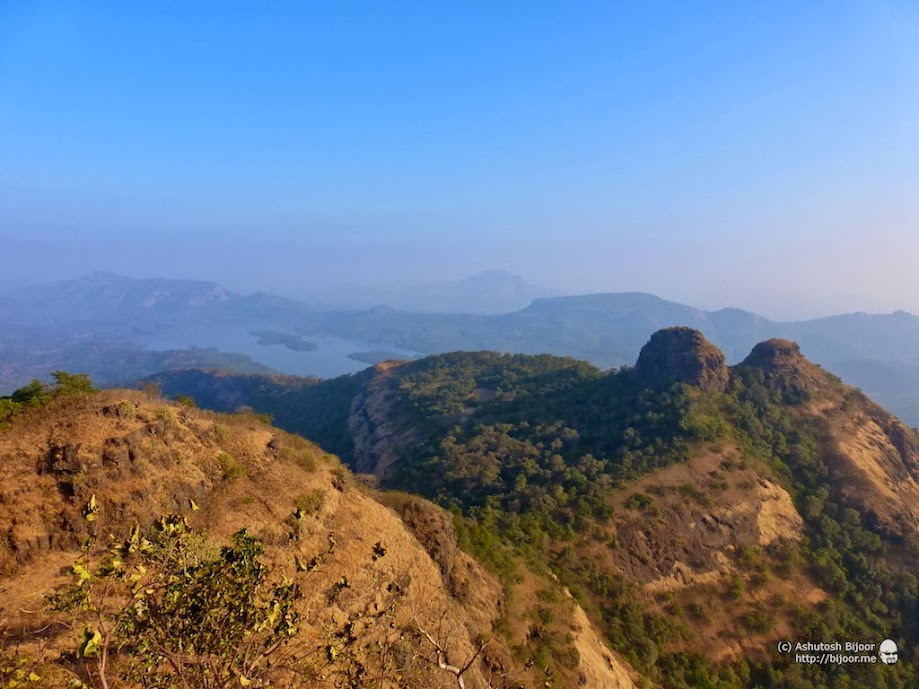 The first time I discovered Vandri Lake was when I visited Takmak Fort. The lake looked so inviting when seen from above, that I just had to make another trip to visit it

The distance from Andheri to Vandri Lake is just under 70 km, and most of the distance is on the excellent road of NH8

The turn off to Vandri Lake is a few km after the toll booth, when you pass Takmak fort on the right. I stopped at the junction for a hot tea and wadas

As you approach the lake, the first thing you see is the dam, and the canal for the overflow

There are steps that lead up to the dam, and I carried the cycle all the way up

The dam has a small road on the top, and the lake water is held high by the dam wall

The view of the lake was spectacular! I was eager to go down to the water

When I went down to the water, I noticed that locals had some boats moored on the shore, and I found out that they did some fishing in the lake

But I was keen to go around the lake, and so I cycled ahead on the same road. The tar road ended after a short distance and it continued as this mud road

The water level must have risen recently, I surmised after seeing this palm tree emerge from the water

I continued along the road and came across a small village

I knew I still had 70 km to return home, so did not venture too far ahead

After taking a last look at the lake, I headed back towards NH8

It was time for school to end, and I saw these kids running along the road

I caught up with them and said hello, and they graciously allowed me to take a photo

I visited the lake again in March 2016, when I was preparing for the Goa Triathlon to practice open water swimming – accompanied by Sameer Naik, my fellow adventurer.

We followed the same route, and arrived at the lake around 7:30 am

We undressed to our cycling shorts, hung our clothes on the cycle and jumped into the cold water

The water was just fabulous! After a strenuous ride, nothing like a cool swim!

After about an hour of swimming, we sat around admiring the lake

The sun was now really beating down on us. March is not a cold month, and we wanted to avoid getting fried

As we prepared to head back, met a bunch of locals who asked us the inevitable question “How much do these bikes cost?”

On the way back we hogged on kheema pav!

Here is the route map. Pretty straightforward. Only thing you have to note is where to turn off the highway.