In the second part of the Three Bromptoneers Ride, we rode from Kelve Beach ahead to Mahim and Shirgaon and ended it at the Satpati jetty.

The ride is divided into five sections:
* Part 1: Our journey started at Kelve Beach, where we visited the two Kelve Forts
* Part 2: Next, we rode to Mahim Fort and Shirgaon Fort (current article)
* Part 3: From Shirgaon, we rode to Satpati and crossed over the Banganga river to ride ahead to Tarapur Fort
* Part 4:From Tarapur, we rode to Dahanu and stayed overnight at the Nest Farms
* Part 5: On our return journey, we stopped at Dahanu Fort and then rode back to Kelve

The video above is a quick tour of our ride to the two forts. 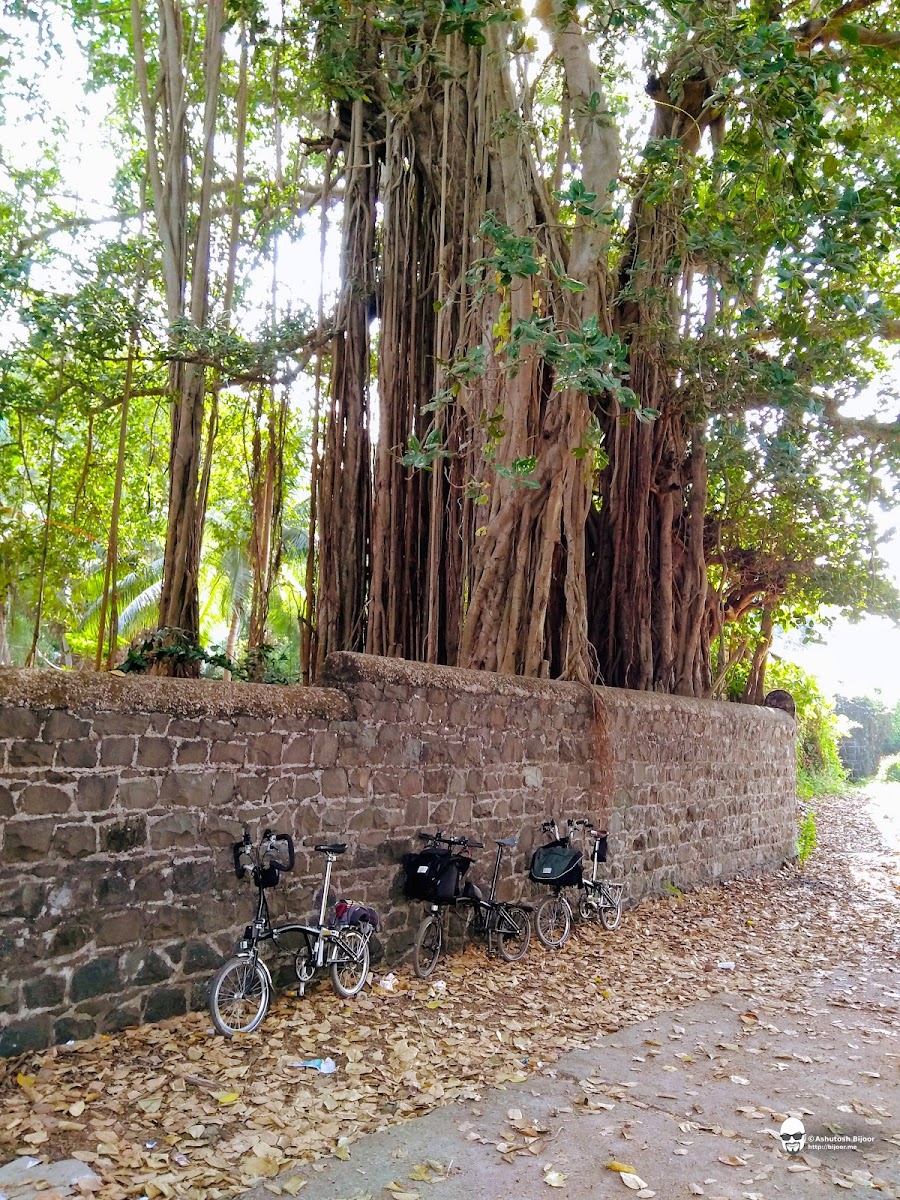 The ride from Kelve to Mahim was beautiful. The road surface was excellent, and we rode through the road that wound its way through the mangroves. When we reached Mahim village, we asked for directions and found Mahim Fort. There was a giant banyan tree just outside the fort and we parked our three bikes under it. 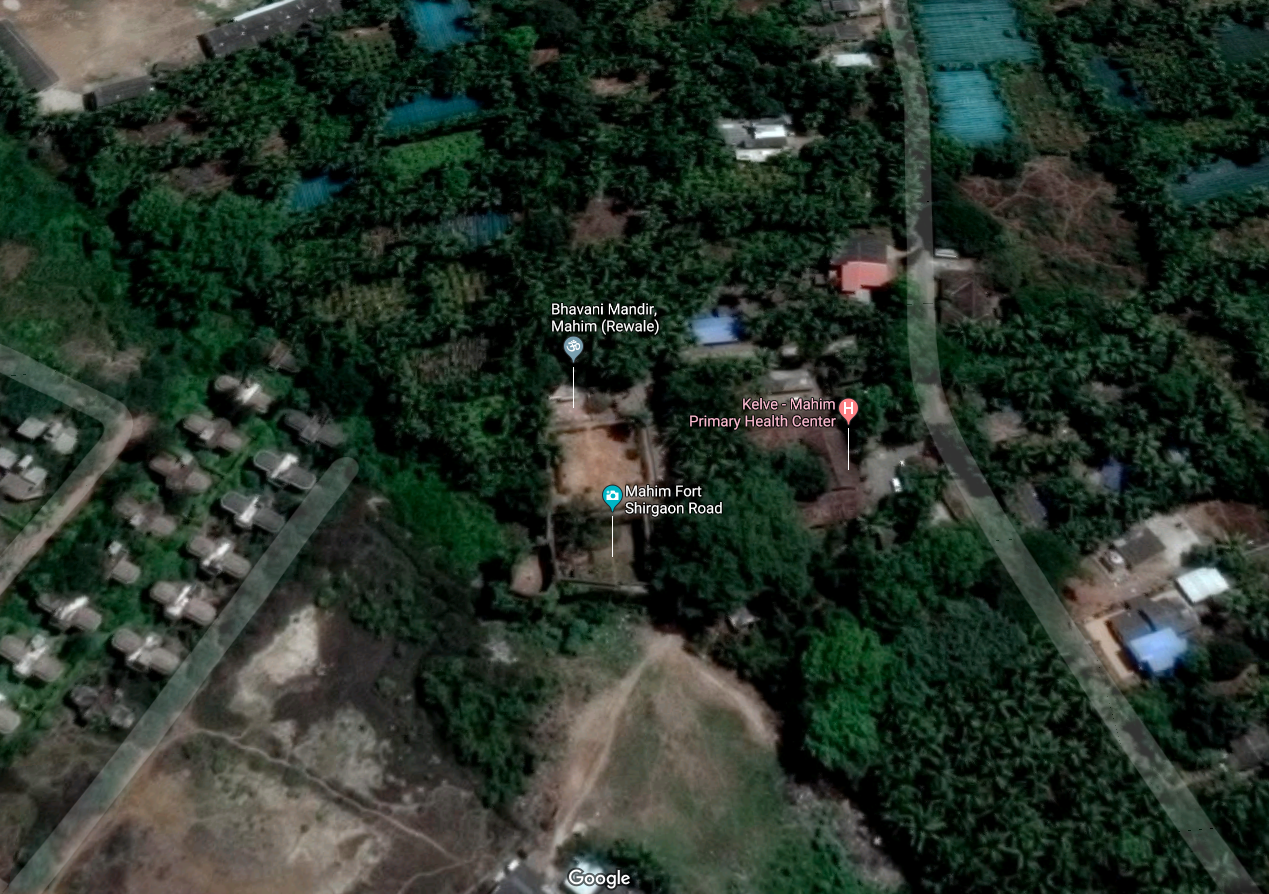 As this satellite picture shows, the fort is located behind the Primary Health Center. It is a rectangular structure with a five sided (pentagonal) bastion on the western face, and entrance on the eastern face. There was at least one, and probably two other bastions of similar shape that do not exist any more (Read more about Mahim Fort) 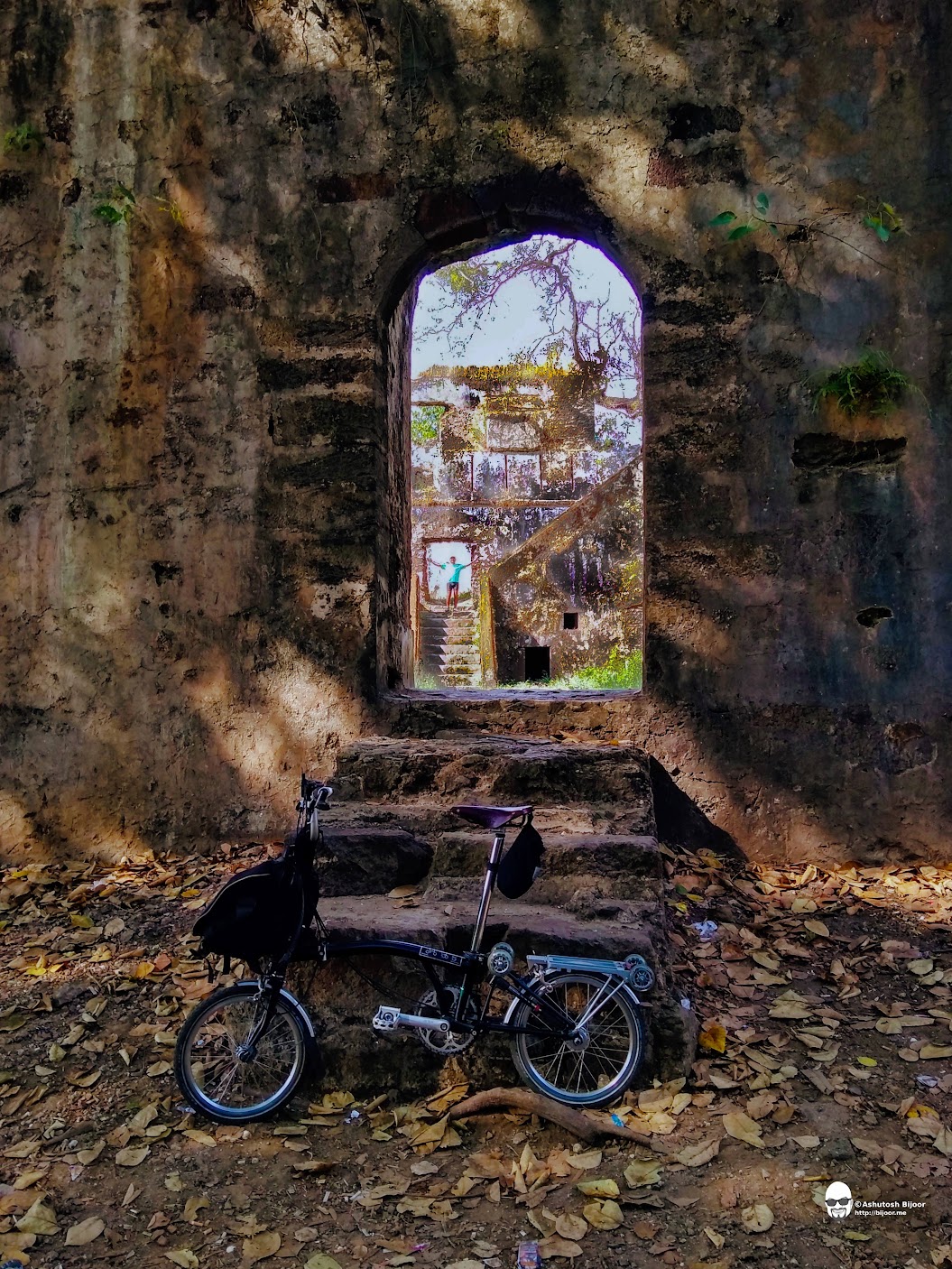 The fort itself is in quite a neglected state and overgrown with vegetation. Luckily, the ramparts are all still in tact and some conservation efforts would make a huge difference to retaining the majesty of this monument. There is a pair of stairways that branch out from the center of the western face that lead up to the ramparts. 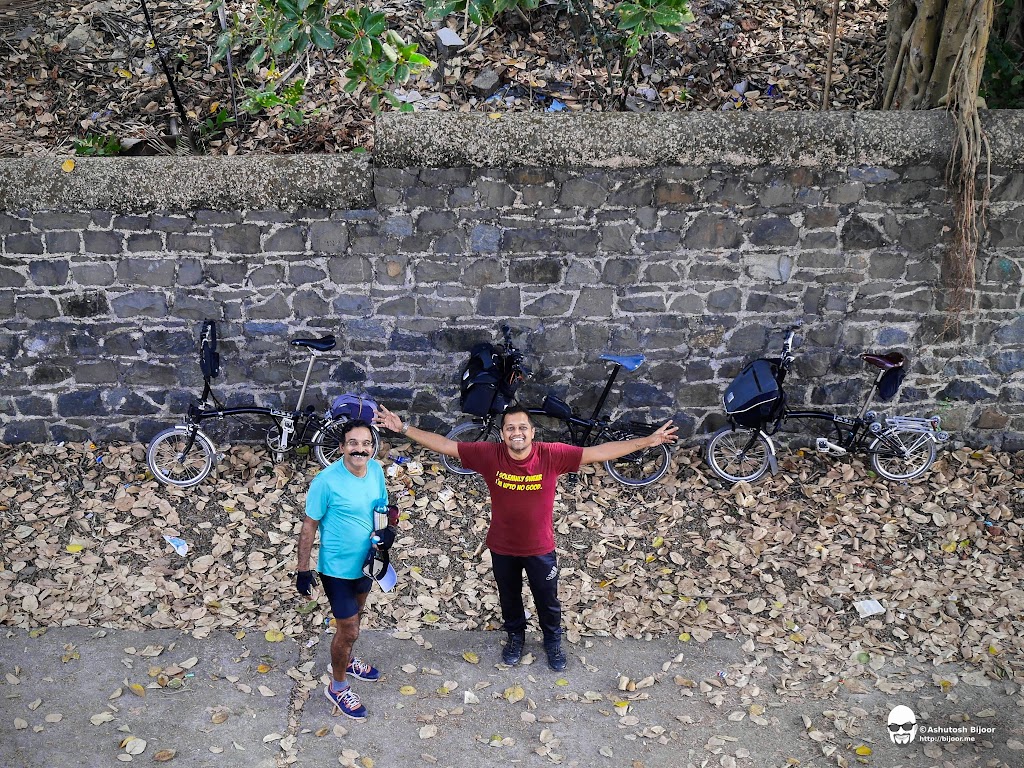 I climbed up on the rampart to get this photograph of the two Bromptoneers - Mahandra and Piyush.

Read more about Mahim Fort here
After exploring the fort, we set out to ride ahead to Shirgaon. 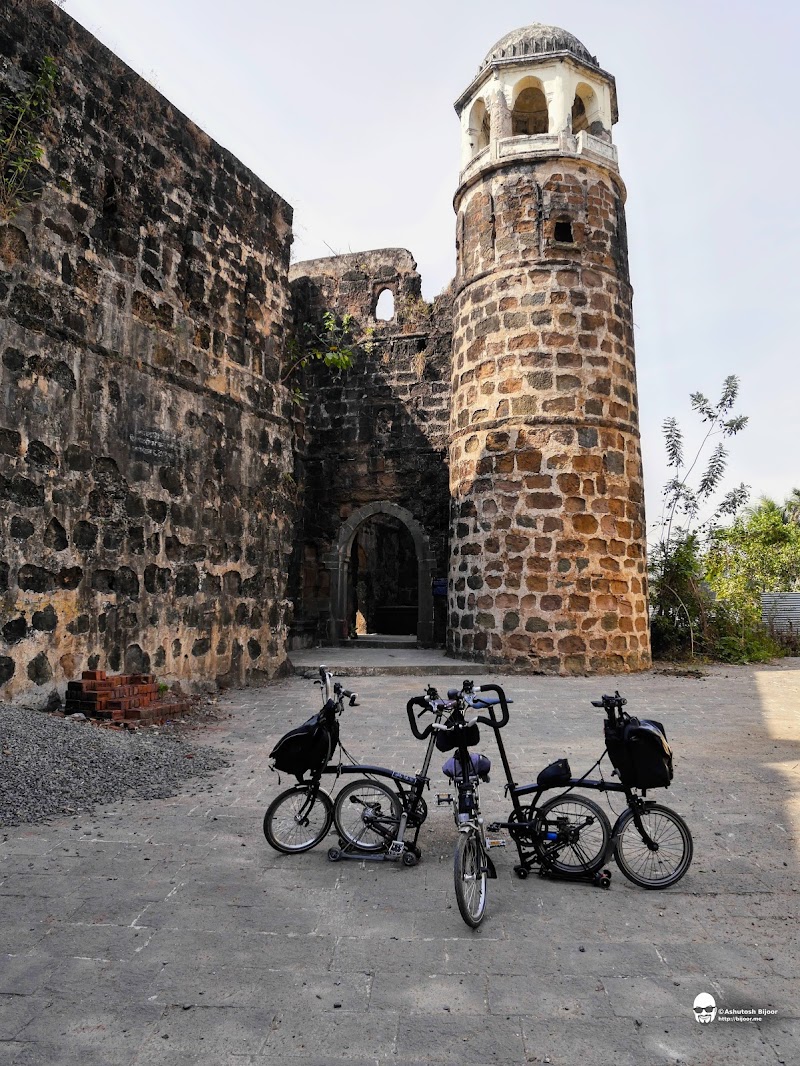 Shirgaon Fort is an impressive structure that has and is still undergoing quite a bit of conservation and restoration work. The imposing tower marks the entrance. 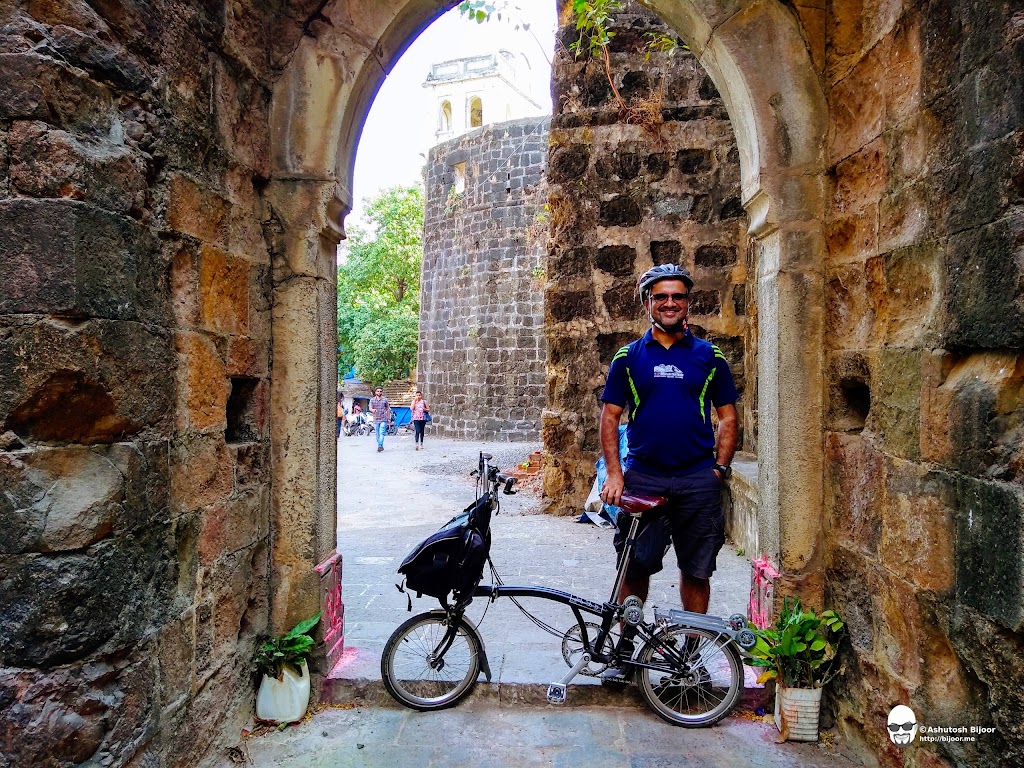 A beautiful arched entrance is just beside the tower that leads into a square, tall bastion. 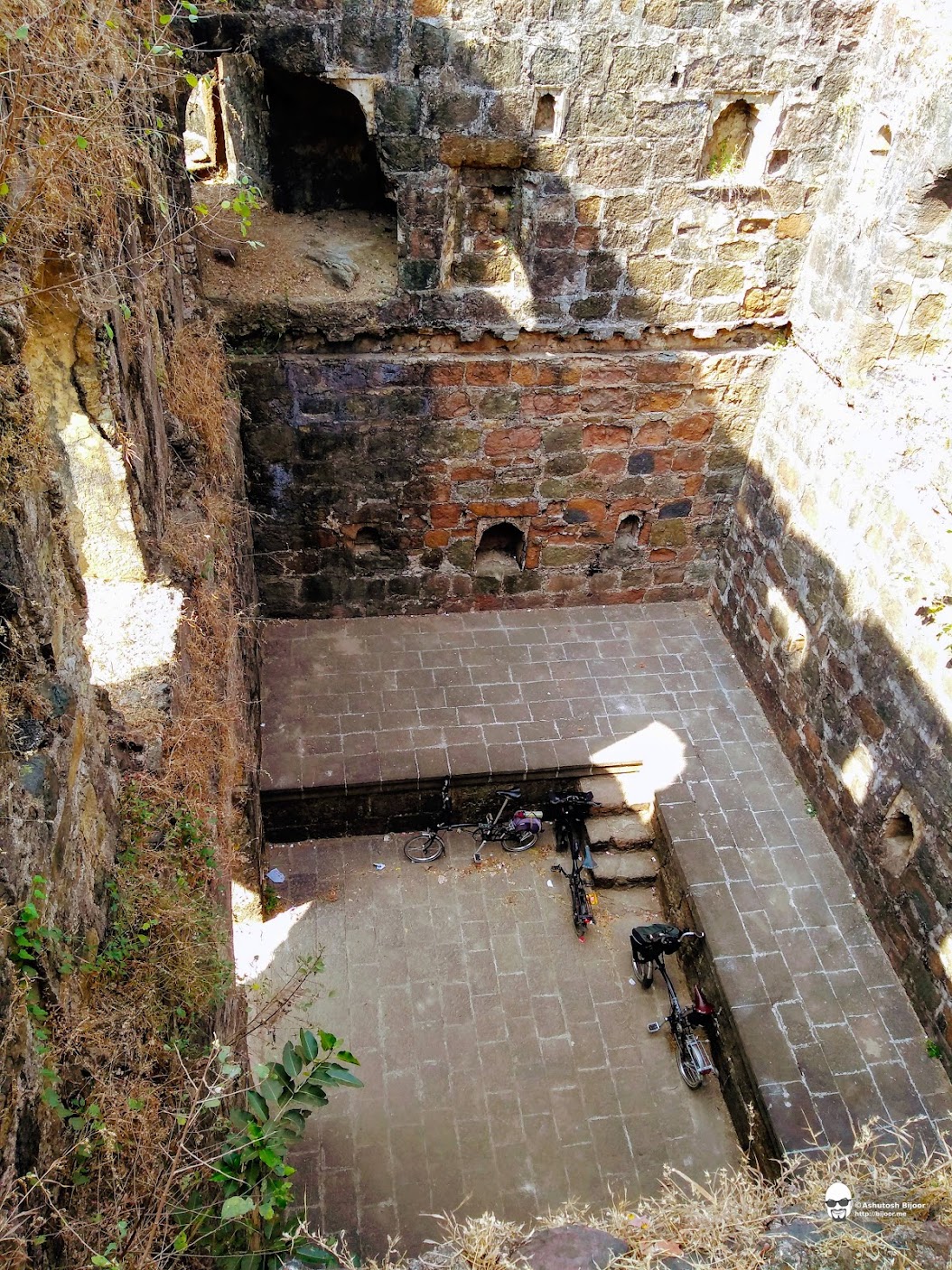 The bastion was probably multi-storeyed but only it's outer walls are surviving now. We parked out bikes here and went in to explore the fort. 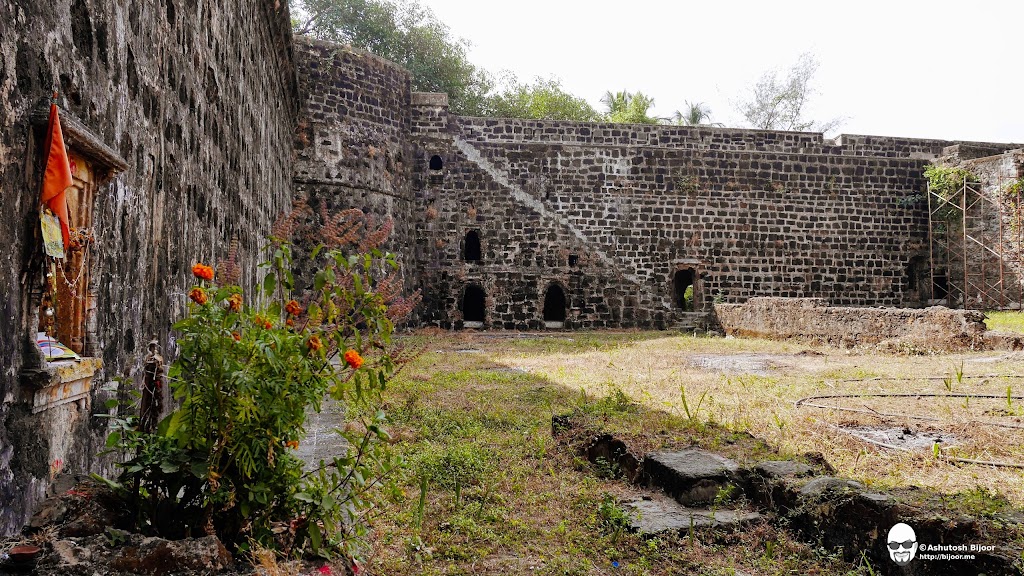 The rectangular fort has tall ramparts on all four sides, but all internal structures are missing or dilapidated 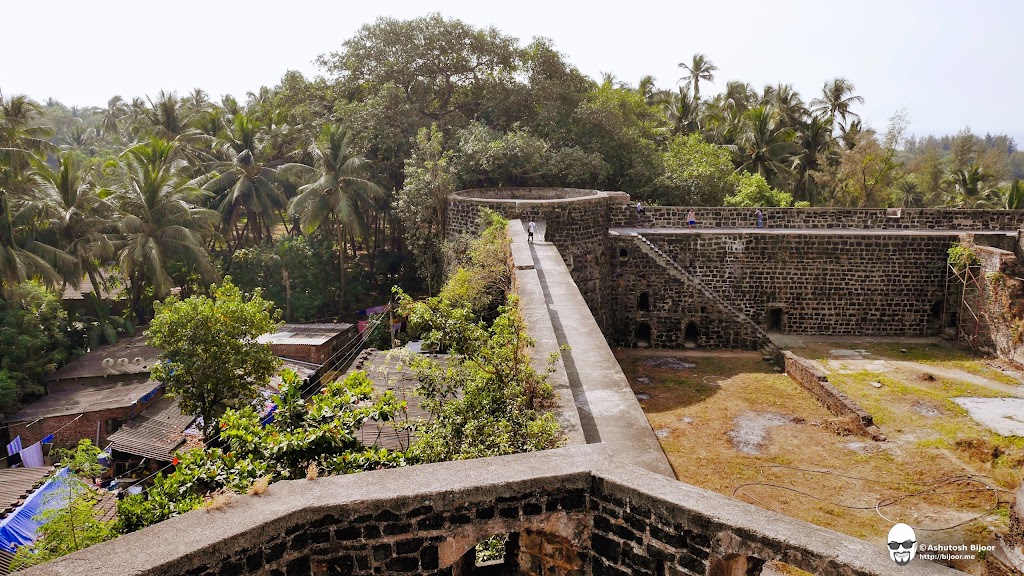 There are steps to climb up on the ramparts. From here, one can get a good view of the central area of the fort as well as the four bastions at the four corners 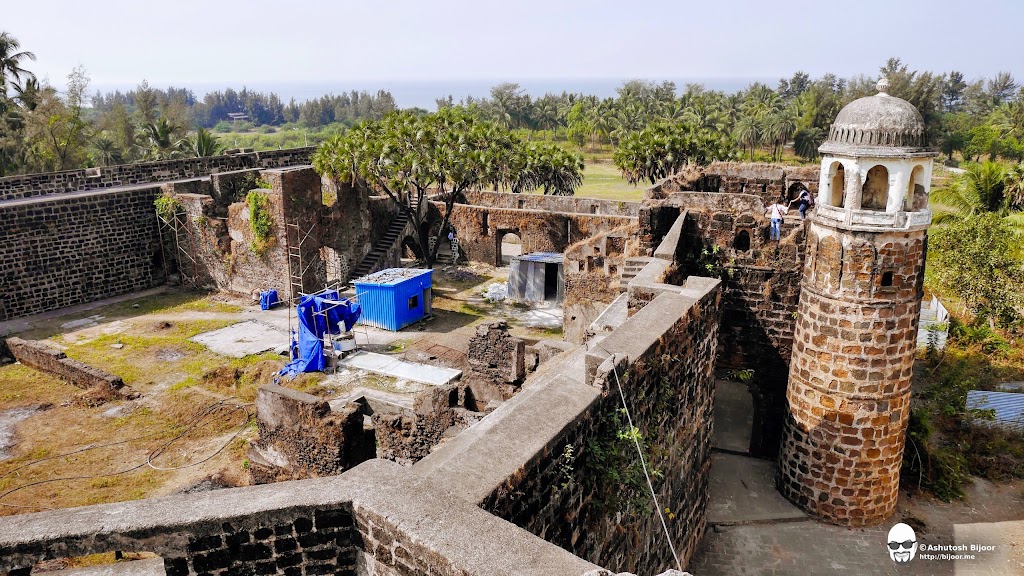 To the west of the fort is the coast, and one can get a great view from the second watch tower located on the bastion on the north east corner of the fort 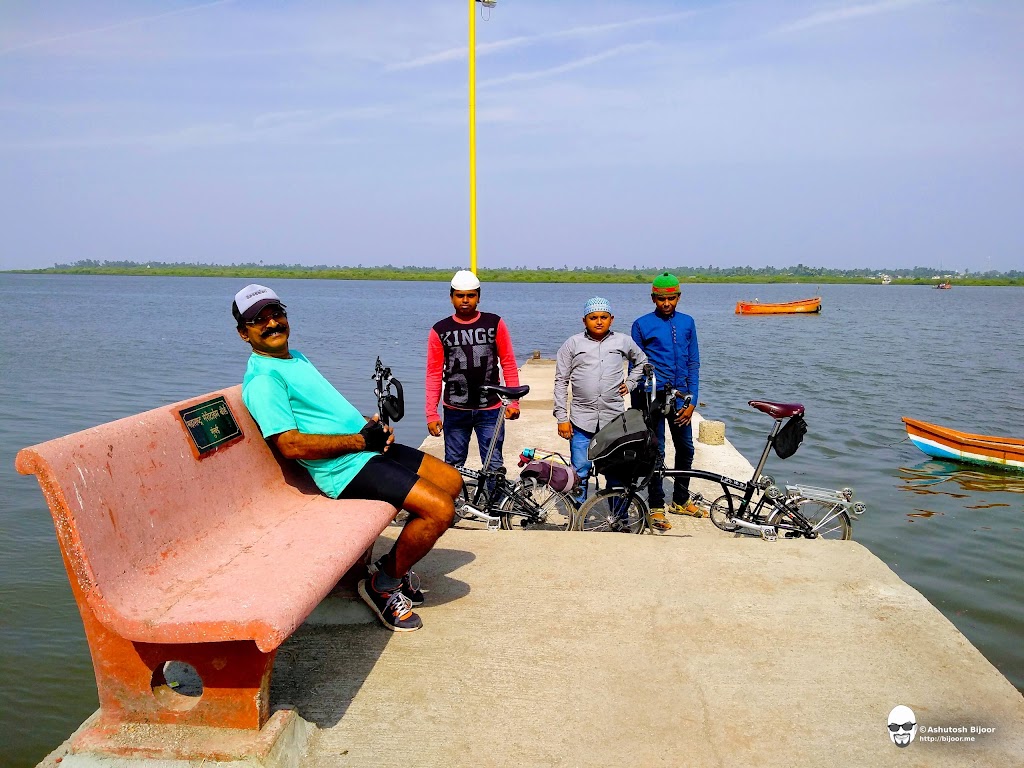 After Shirgaon, we continued further north from Shirgaon towards Satapati, where we took a boat across the Banganga river to head towards Tarapur Fort, our next destination. 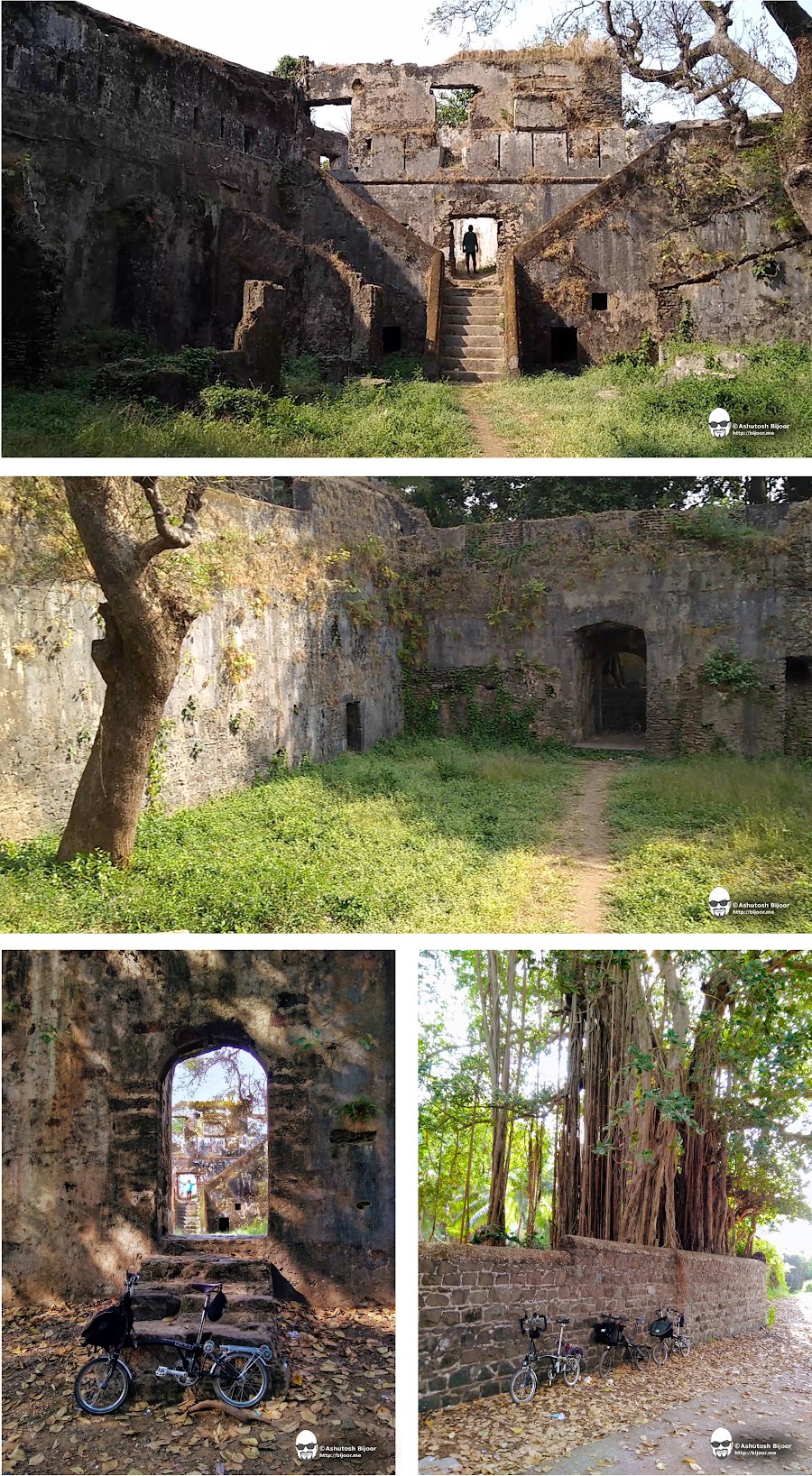 The Thane Gazetteer[1] describes Mahim Fort as below:

According to tradition, at the close of the thirteenth century, Kelve Mahim was taken from its Naik chief by Bhimdev, the chief of Bombay-Mahim. It passed to the Delhi Musalmans about 1350, and from them, perhaps about 1400, to the Gujarat kings who kept it till it was taken by the Portuguese about 1532.

In 1612 it was attacked by the Moghals but bravely and successfully defended. In 1624 De la Valle speaks of two towns at Mahim. In 1634 the town is described as about the size of Dahanu, with many orchards and fruit trees and much good water.

The fort was equal to Dahanu and Tarapur, and was armed with four brass falcons for shooting stone balls, and had a good store of gunpowder and other ammunition. There was a Portuguese captain, ten Portuguese soldiers, one naik, ten sepoys, one inspector of police, and four constables and a torch-bearer.

Close to the fort was a village inhabited by fifty Portuguese families, among whom there were some of noble birth, 150 native Christian families, and 200 slaves who carried arms. In 1670 Ogilby mentions Quelmain as a Gujarat coast town, called from two villages near the coast, one Kielwe the other Mahi. The fort and village of Maim are mentioned by Gemelli Careri (1695).

In 1728 the fort was described as weak and irregular, a very low wall of stone and mud 550 feet long and 250 wide, with three bad bastions looking to sea and four to land. It was guarded by fifteen pieces of ordnance and a garrison of sixty soldiers seven of whom were white. A stockade at some distance was under a captain with thirty men. In January 1739 it was taken by Chimnaji Appa, after an obstinate defence. In 1750 it is mentioned by Tieffenthaler as a place once under the Portuguese then under the Marathas.

In 1760 a small fort to the east of Mahim formed a triangle flanked by two five-cornered embrasured bastions, one to the north the other to the east. The Mahim fort was long, and part of it was washed by the waters of the creek. From the road it appeared a broken curtain with nearly ruined bastions.

Additional references about Mahim Fort are also found in the book "Notes on the History and Antiquities of Chaul and Bassein" by J. Gerson da Cunha[2] that are reproduced here. 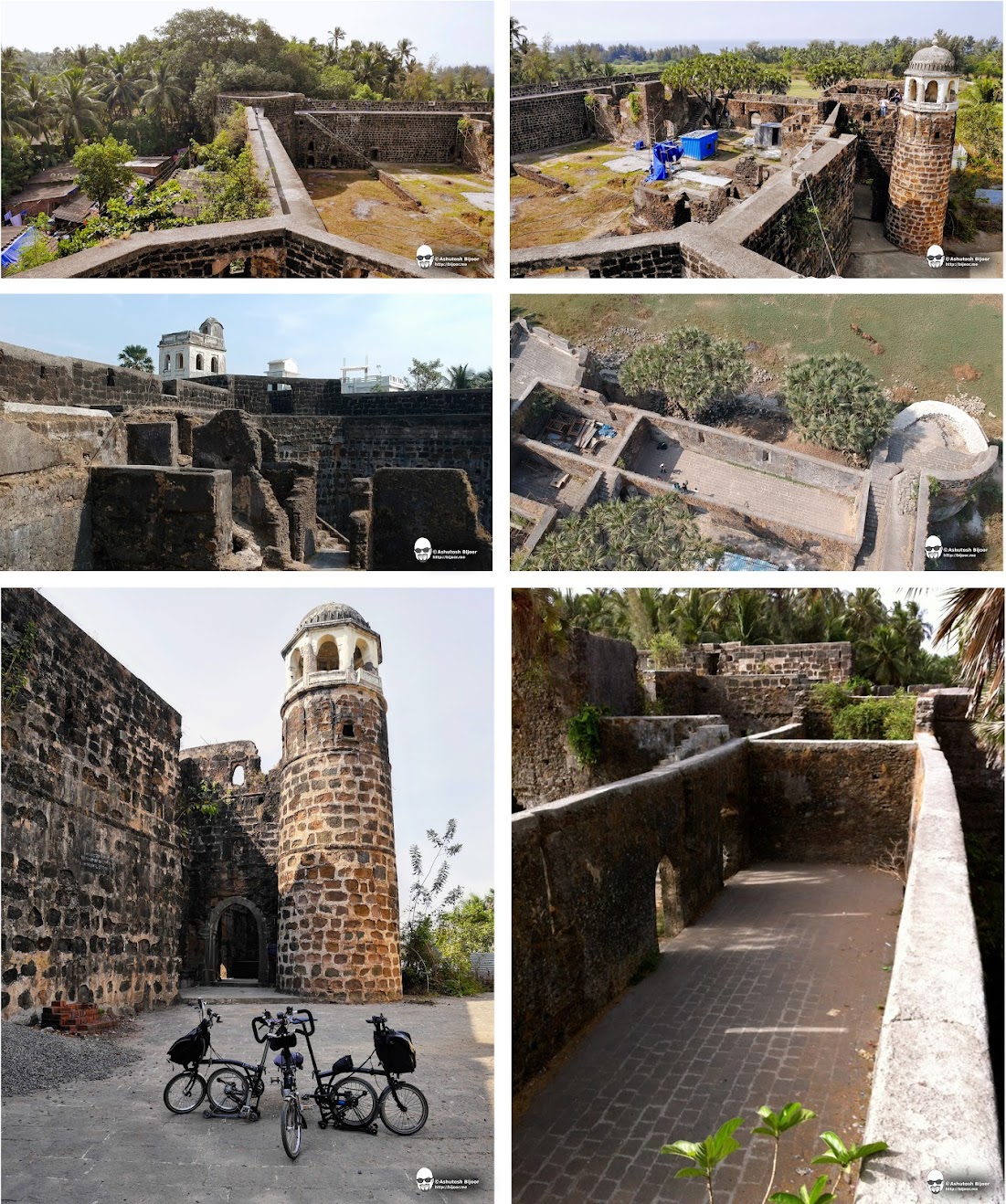 The Thane Gazetteer[3] describes Shirgaon Fort as below:

Sirgaon Fort stands in Sirgaon village, on the sea-coast about three miles north of Mahim. When surveyed in 1818, its western face was washed at high tides by a narrow inlet or backwater which stretched a short distance to the south.

The fort was oblong with a mean length from the interior of about 200 feet by about 150 in breadth. Almost all the fortifications were of solid masonry in excellent order, with a height of thirty and a depth or thickness of ten feet, including the parapet which was seldom more than three feet wide.

The defences of the fort consisted of three towers and a bastion at the remaining or south-east corner, whose parapet and escarpment were greatly out of repair. Nearly half the space of the fort was taken by buildings for the garrison and stores. The walls of these buildings were still standing but they were hardly habitable. A well supplied a sufficient quantity of sweet water.

In 1818, the village of Sirgaon and numerous trees came so close to the fort that none of the adjoining ground to the north and east could be seen, and, under cover of the trees, the fort might be approached unperceived to the very foot of the works.

In 1862 the fort was described as having a ruined west wall, though the land side was fairly preserved. Supplies of water and food were available. Close under the fort is the school which now occupies the old traveller's bungalow.

Additional references to Shirgaon Fort are found in the book "Notes on the History and Antiquities of Chaul and Bassein" by J. Gerson da Cunha[2:1] that are reproduced here.

The below scans are from the footnotes in the book "Notes on the History and Antiquities of Chaul and Bassein" by J. Gerson da Cunha[2:2]. 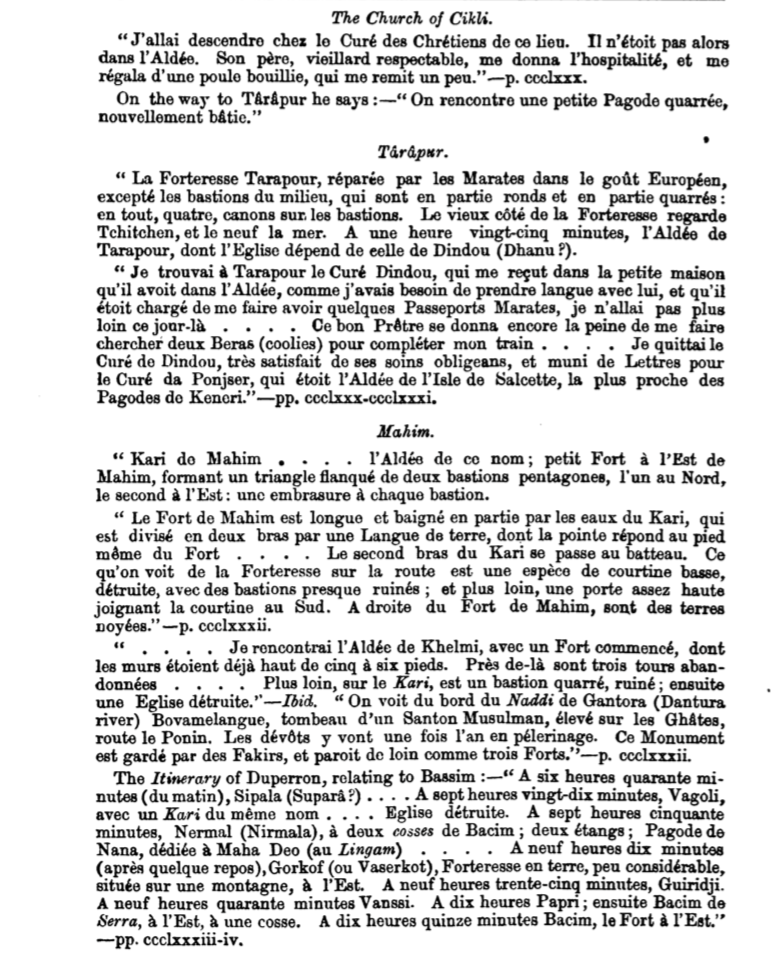 The following is the translation kindly provided by Pierre Moreira, who manages the Facebook page titled Indo-Portuguese Peregrinations / Peregrinações Indo-Portuguesas

He speaks of the fort “The Kari of Tchikla” or Chikli thus :- “On the side of the village, there is a square fort consisting of four walls flanked by four bastions. This fort dominates the Kari; it has been repaired by the Mahratis who were facing difficulties to protect the inhabitants from pirates attacks. The edge of the Kari River is lined with some kind of low parapet, long six hundred feet.” p. CCCLXXXVIII.

“I was going to stay at the local Christians’ priest’s house. He wasn’t present in the village. His father, a respectable old man, hosted me and treated me to a boiled chicken which made me feel better”.

On the way to Tarâpur, he says : - “We come across a small square pagoda, recently built”.

“Tarâpur fortress, repaired by the Mahratis according to the European style, apart from the bastions in the middle which are partly round, partly square : altogether, four, guns on the bastions. The old side of the fortress watches Tchitchen, and the new one, (watches)the sea. At one hour and twenty five minutes (from there), the village of Tarâpur which church belongs to Dindou (Dhanu ?) one”.

“I found in Tarâpur, the priest (of) Dindou who welcomed me in the small house he had in the village. As I needed to speak with him and that he was in charge of providing me some Mahrati passports, I didn’t go further that day...

This nice priest went even in a lot of trouble to look for two Beras (coolies) to supplement my party. I left the priest of Dindou, very pleased with his kind treatment and provided with letters for the priest of Ponjser which was the village of the Salcette island, the closest from the pagodas of Keneri”.

Kari of Mahim.... The village with the same name; a small fort East of mahim forming a triangle flanked by two pentagons bastions, one to the North, the second to the East: a doorway to each bastion.

The Mahim fort is long and bathed by the waters of the Kari which is divided into two arms by a strip of land whose tip corresponds with the foot of the fort.... The second branch of the Mahim river can be crossed by boat. What we see of the fortress from the road is a kind of low wall, destroyed, with almost ruined bastions; and far, a fairly high door linking the wall to the South. On the right side of the fort of Mahim, is flooded land.

I arrived at the village of Khelmi where a fort whose construction began and whose walls were already five to six feet high. Close by, there are three abandoned towers. Further, on the Kari River, there is a square bastion, tumbledown. Then, a destroyed church. Ibid. You can see from the riverside of the Gantora Naddi (Dantura river) Bovemalangue, tomb of a Muslim Saint, built on the Ghats, on the road to Ponin. Devotees go there once a year on a pilgrimage. This monument is guarded by fakirs and looks, from a distance, as three forts.”

The itinerary of Duperron, relating to Bassim :-“At six forty (morning time) Sipala (Suparâ ?)... At seven thirty, Vagoli, with a same name Kari... Destroyed church. At seven fifty, Nermal (Nirmala) at a distance of two “cosses” from Bacim; two ponds; Nana pagoda dedicated to Maha Deo (lingam).... At nine hours and ten (after some rest), Gorkof (or Vaserkot), an earthenware, unimpressive fortress, located on a mountain, to the East. At nine thirty five, Guiridji. At nine forty, Vanssi. At ten, Papri; then Bacim de serra, to the East, at one “coss” distance. At ten and fifteen minutes, Bacim, the Fort, to the East”.