The Three Bromptoneers - Mahandra Kumar, Piyush Shah and I - rode from Kelve to Dahanu, where we stayed overnight at Nest Farms. On the return journey, we also visited Dahanu Fort and Nandgaon Beach before crossing back over Banganga river to Saptati, from where we rode back to Kelve to complete our adventure.

The above video is a quick tour return journey from Nest Farms, with a visit to Dahanu Fort and Nandgaon beach. 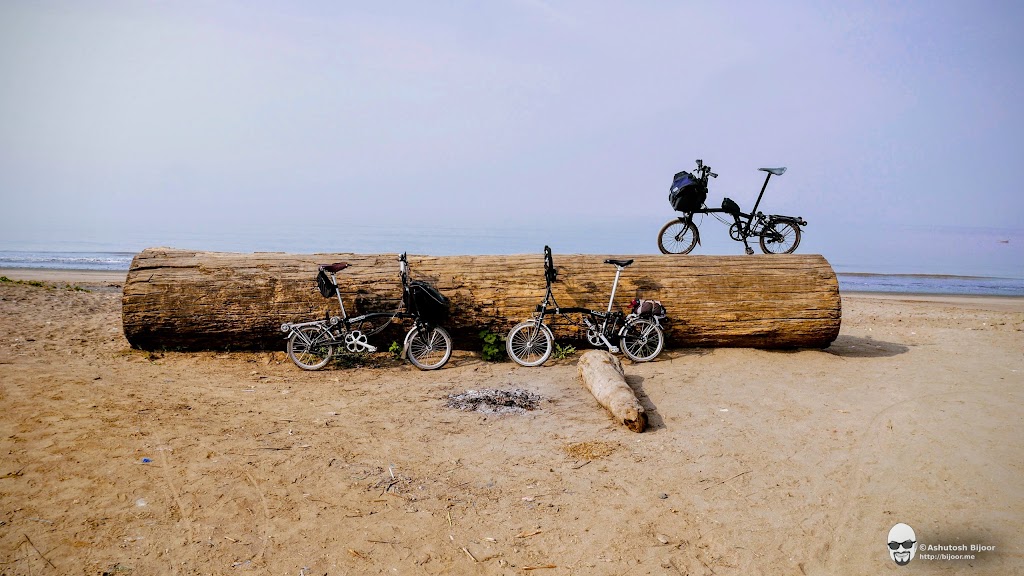 After saying our good byes to Rajeev Lamba at Nest Farms, we stopped for a short while at the beach that is close to the farm. This log is iconic of the beach and has been lying here for several years. We enjoyed the sea breeze for some time and then headed towards Dahanu Fort 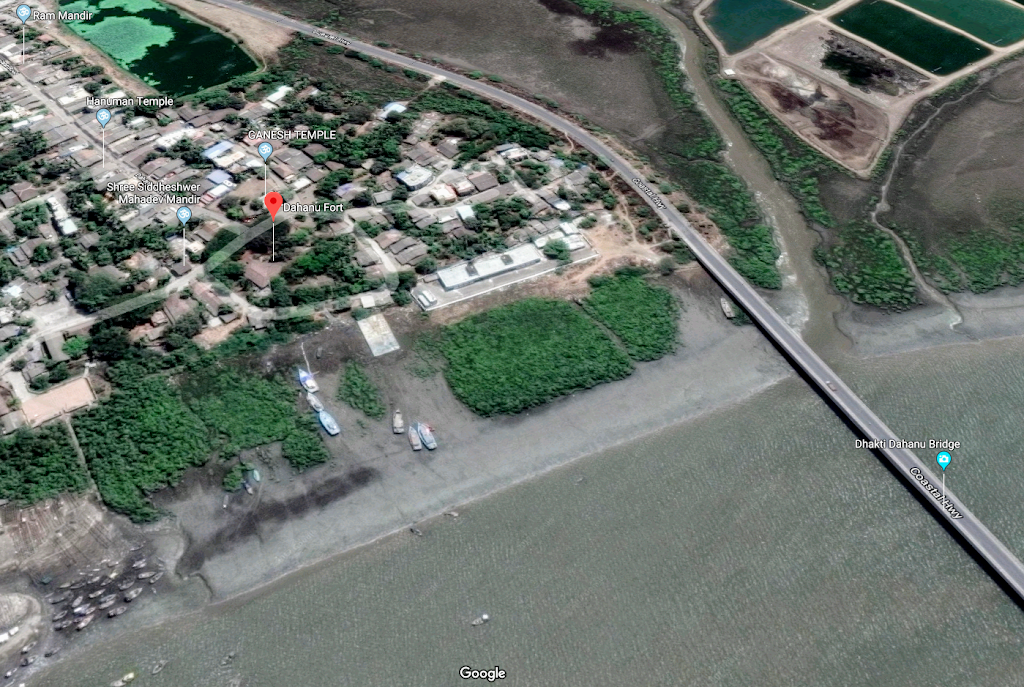 The road to Dahanu Fort is through the town, and it is located at the mouth of the Dahanu creek and along the new coastal highway. 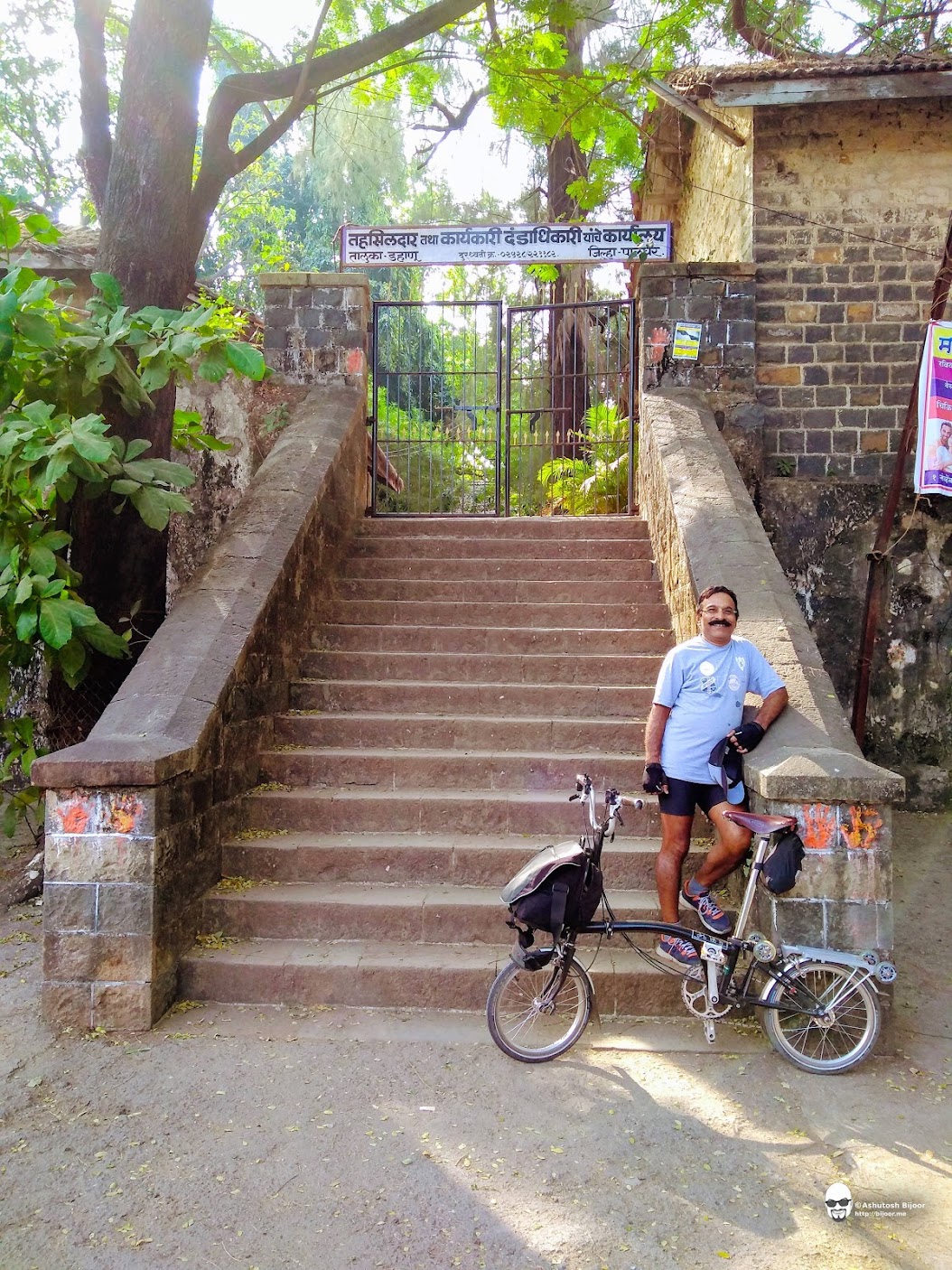 The fort is now used as a Tehsildar's office and also houses a police station and an unused jail. Being a Sunday, all the offices were closed but we were able to enter without trouble. 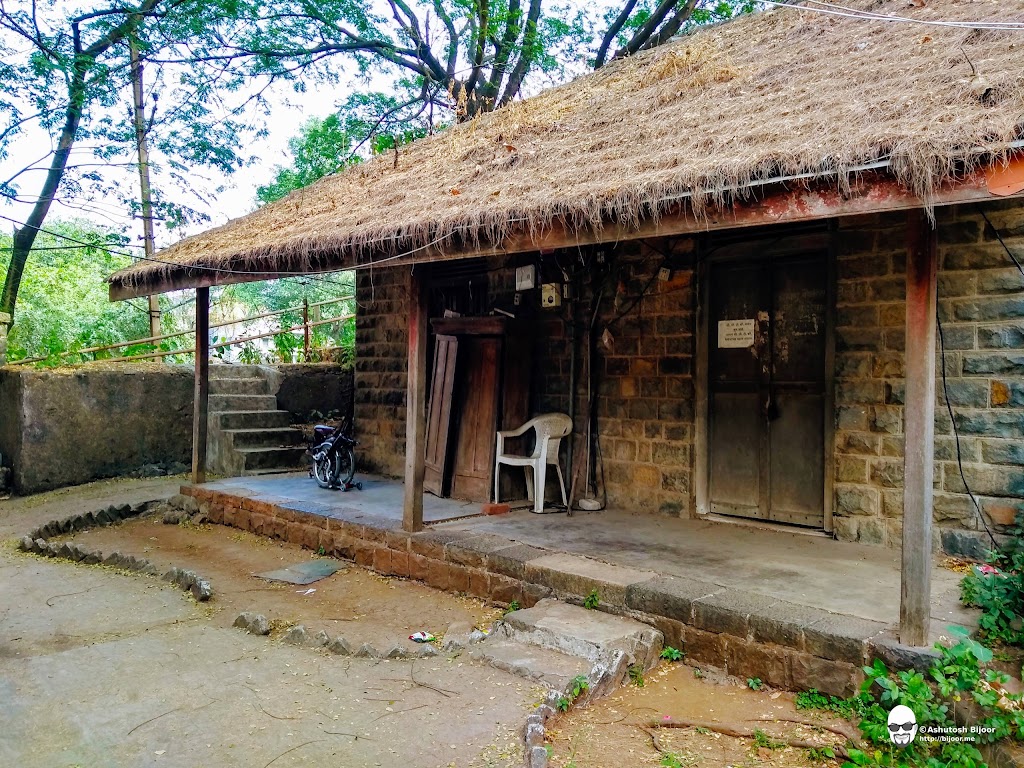 The structures inside are well maintained due to their contemporary use but the construction is still the old wood and stone structure. 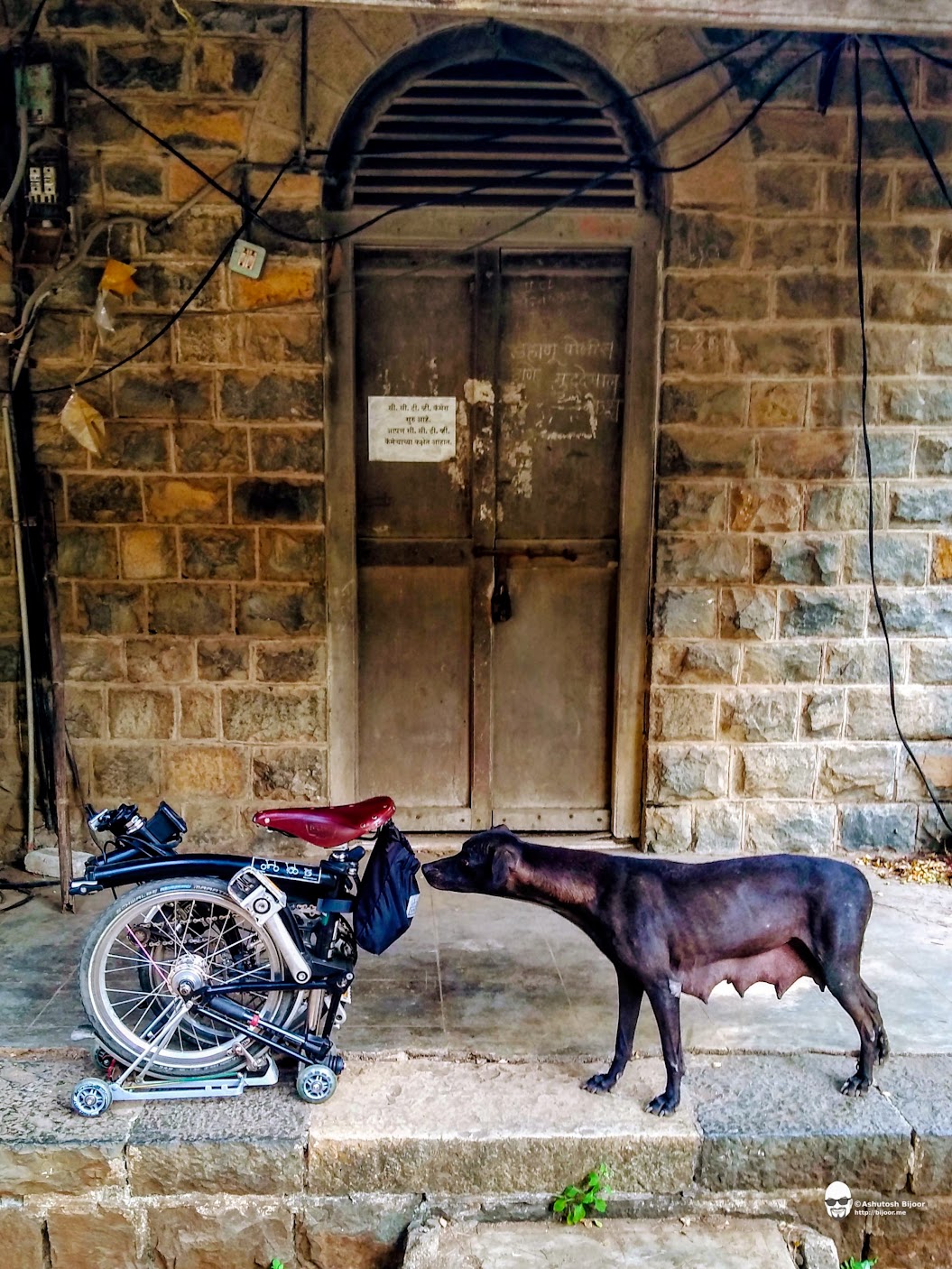 My folded bike attracted the attention of a dog probably due to its visual similarity. She came to investigate but soon figured that looks are deceiving and there was no promise of a mate here. 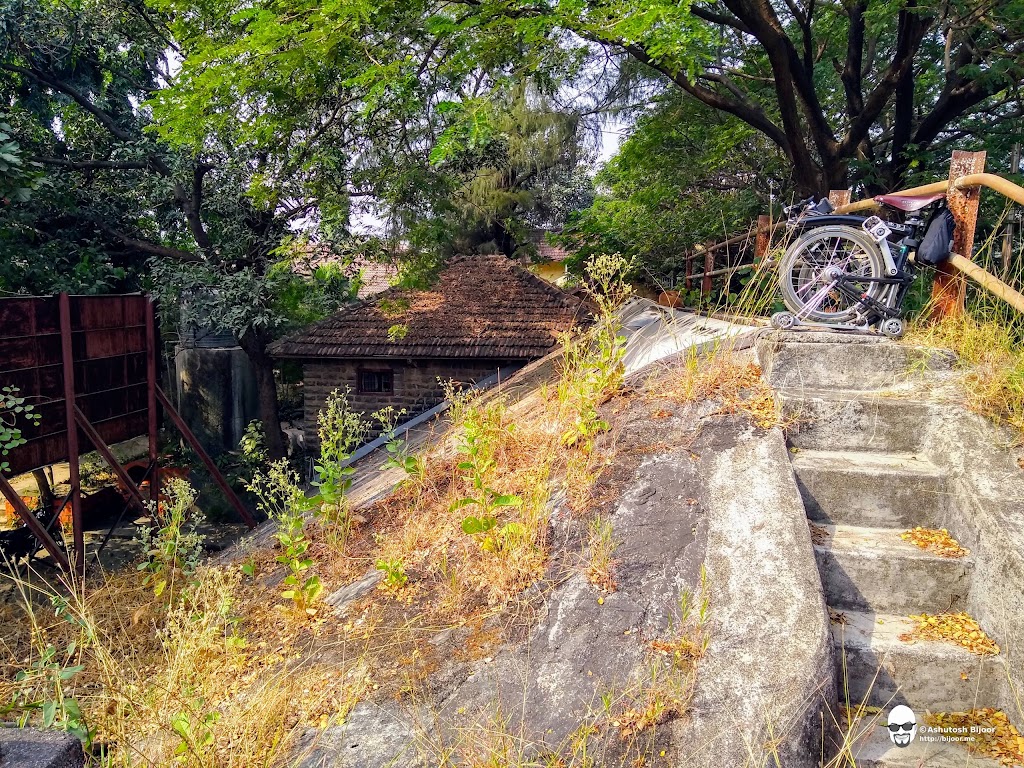 There are stairs leading up to the ramparts though the walk along the ramparts is quite precarious as one has to make way along the roofs of some of the structures within. 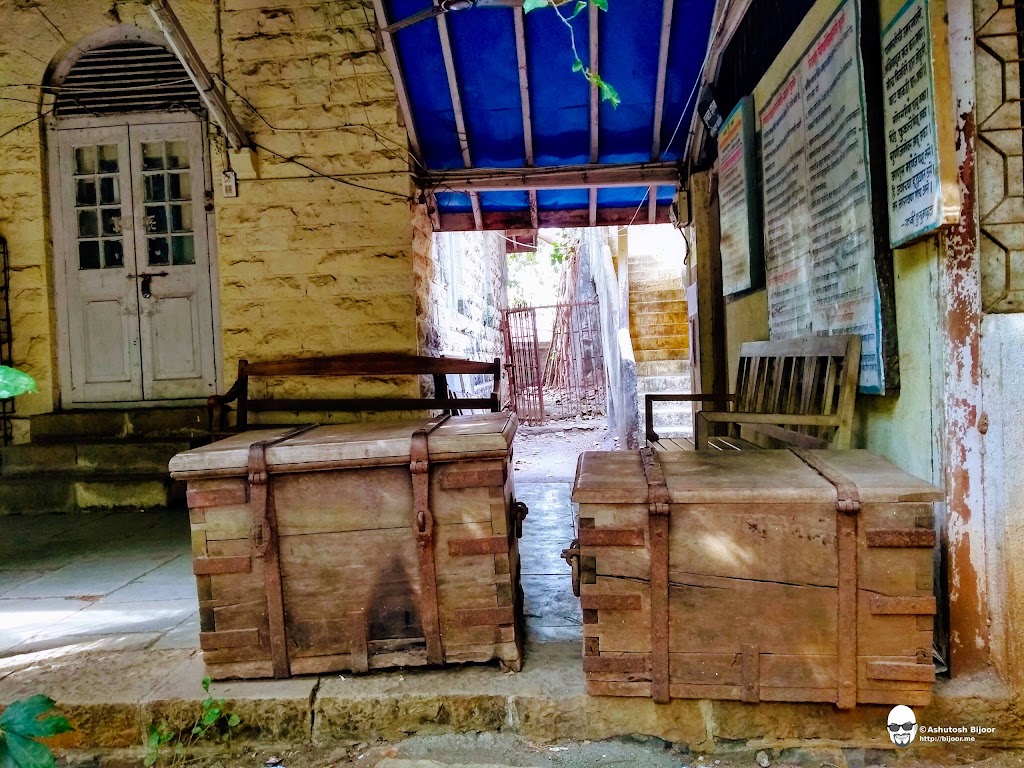 As all the offices were closed, we got to see all the structures without disturbance. These old wooden chests look like they may have been in use since the heydays of the fort! 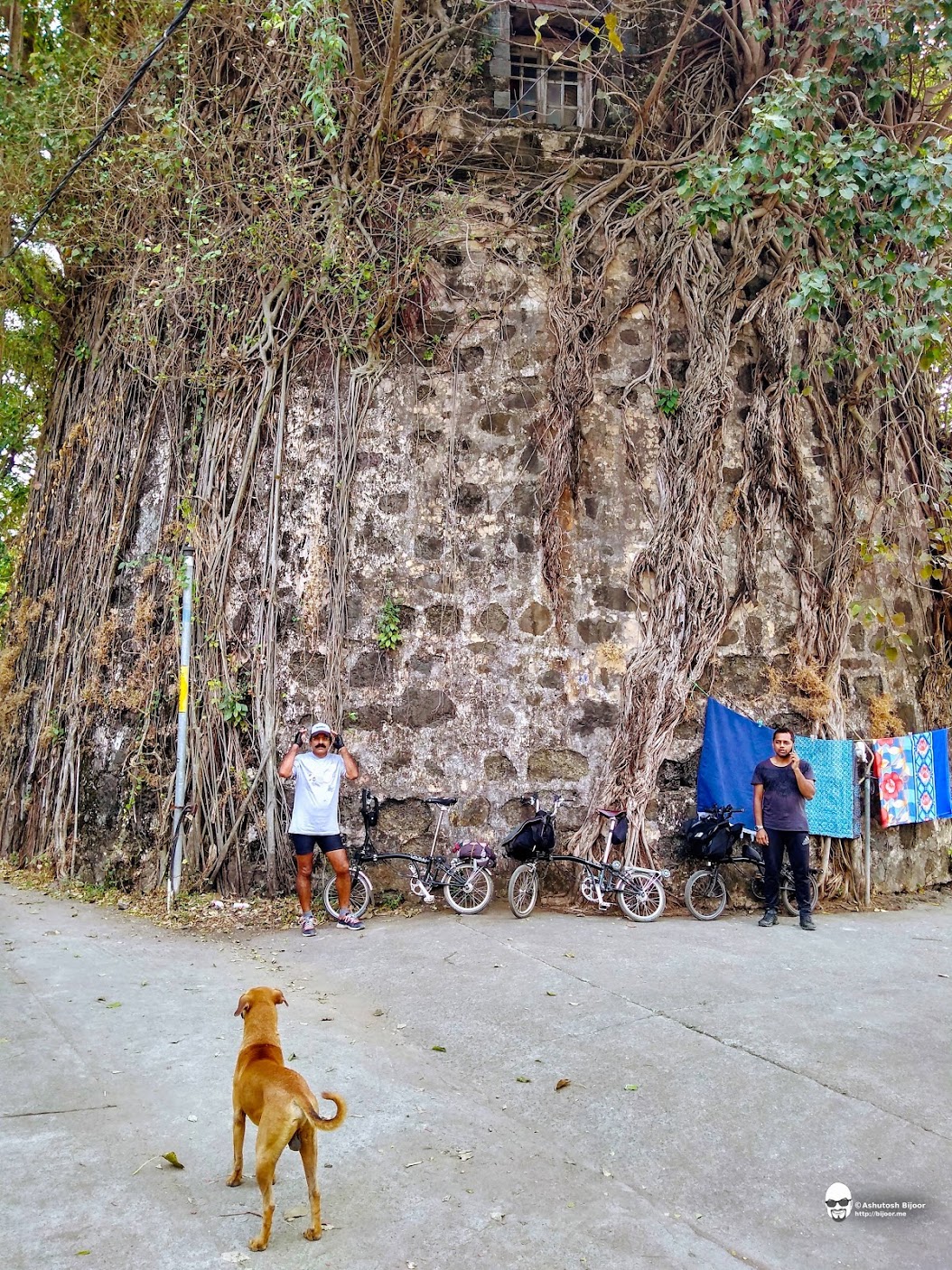 We then went around the fort to see the bastions at the four corners. This large bastion at the north-west corner of the fort leads to a road that goes around to the back of the fort that faces the creek. 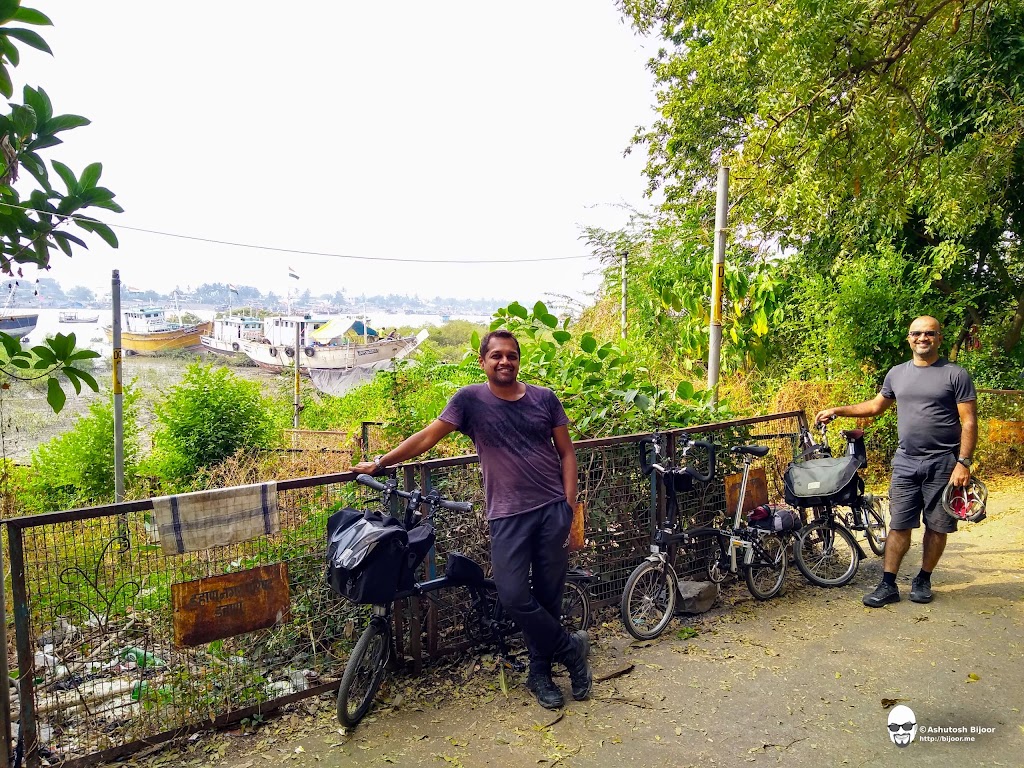 There is a small jetty with fishing boats moored for the day. Just opposite the jetty is located the Customs Office. 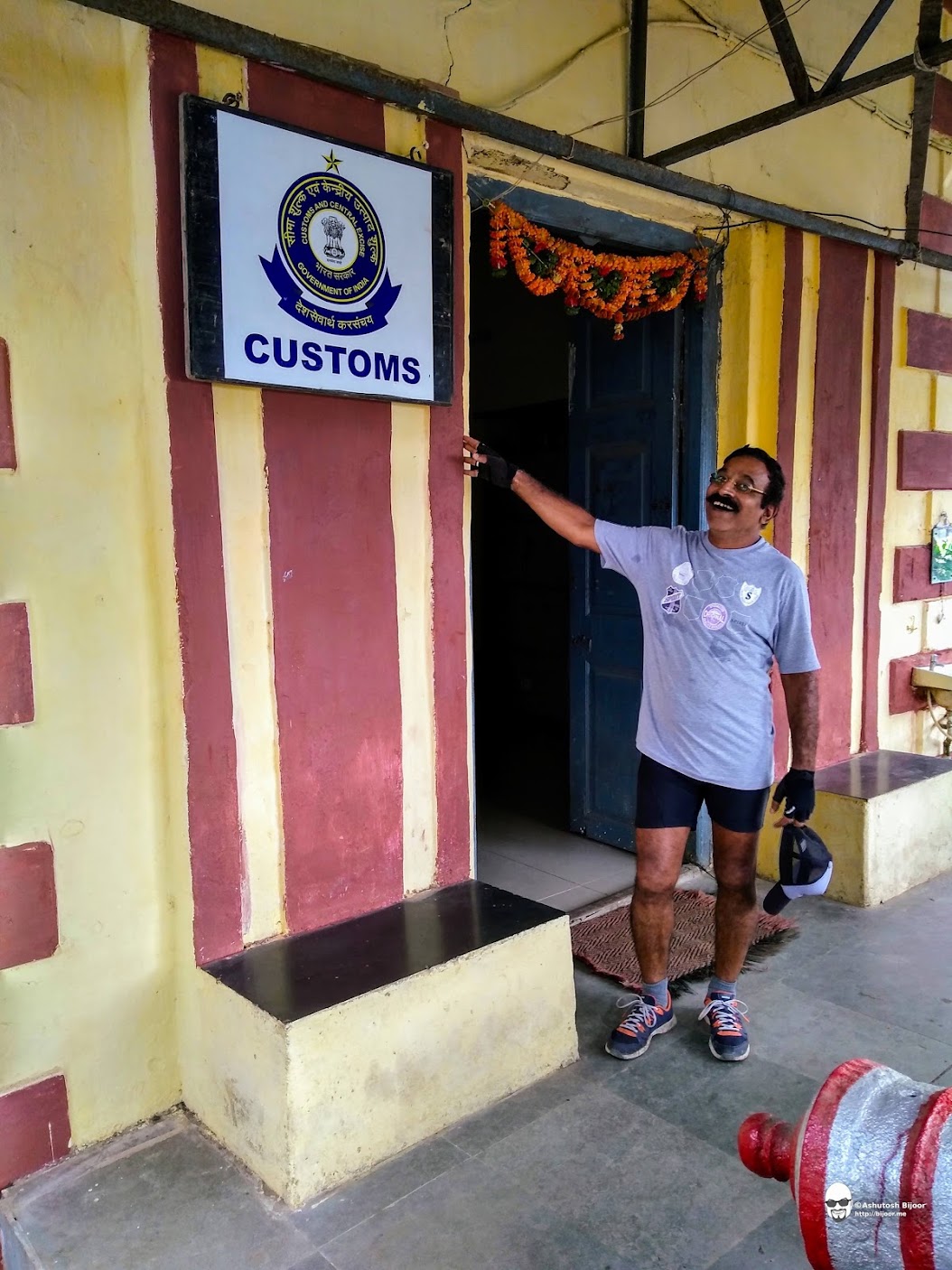 Mahandra being an ex-customs officer was able to converse with the officer on duty and shared some memories of his time with the department. This photo is one for the record of Mahandra-ji's illustrious past :) 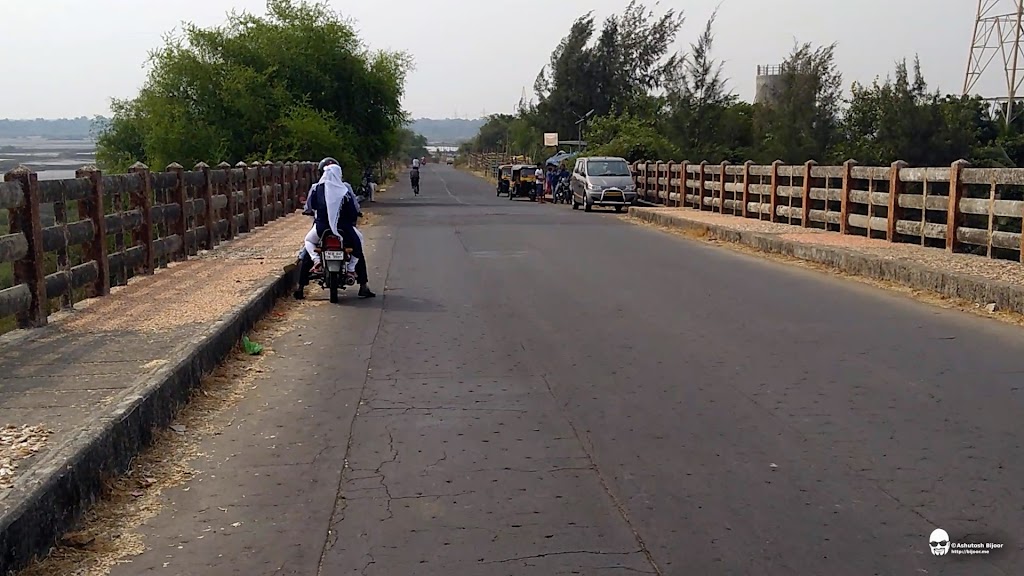 From Dahanu Fort, we went along the shore and climbed up the bridge across the creek that is part of the Coastal Highway. 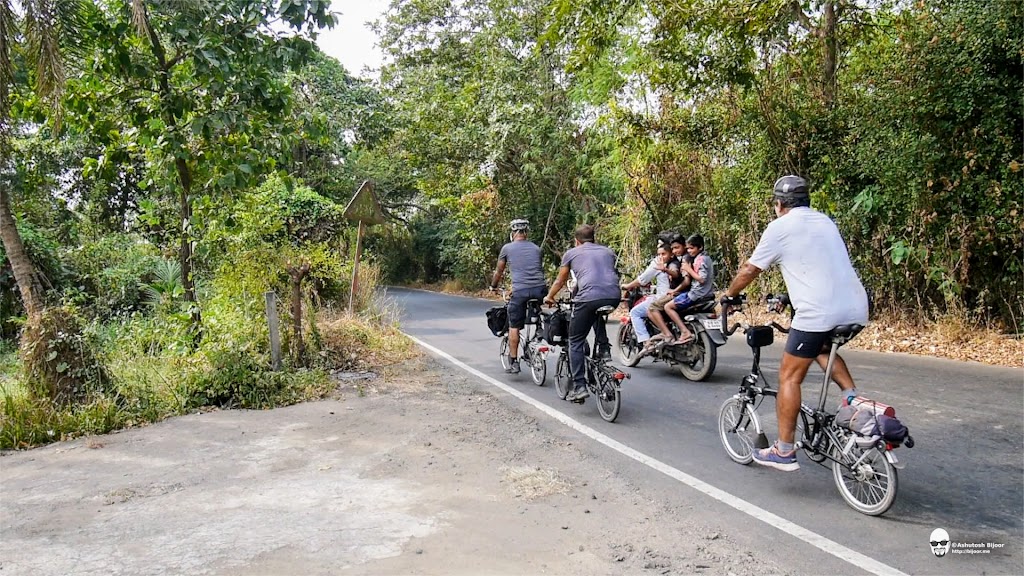 The ride along the coastal highway led us through Chinchani, where a solitary bastion of an old fort called Chikli is located. However we did not stop to investigate it and carried on riding through the town. 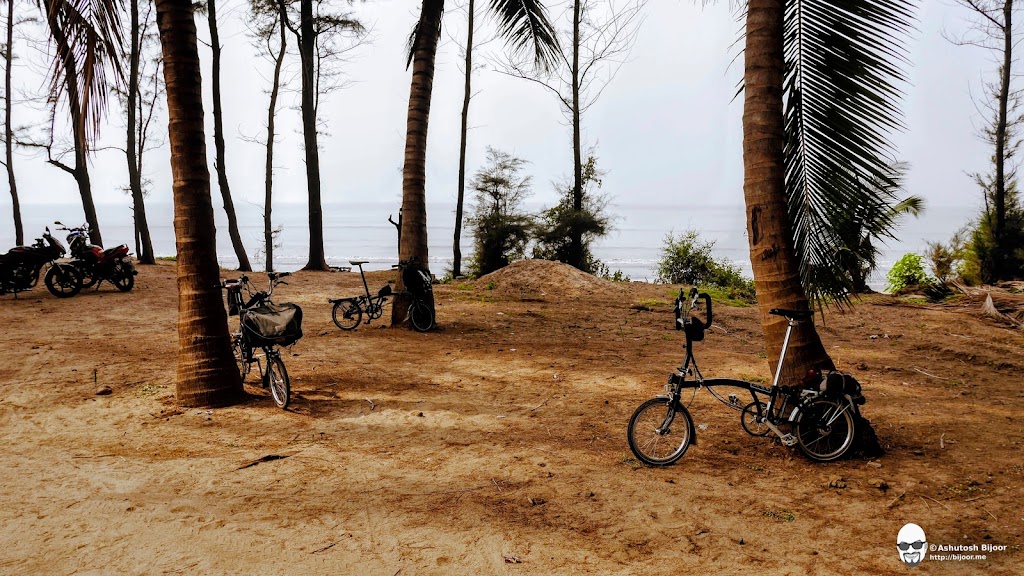 Our next halt was at Nandgaon Beach, located to the north of Murbe. We stopped for a short while and enjoyed the shade in the thicket of casuarina and coconut trees. 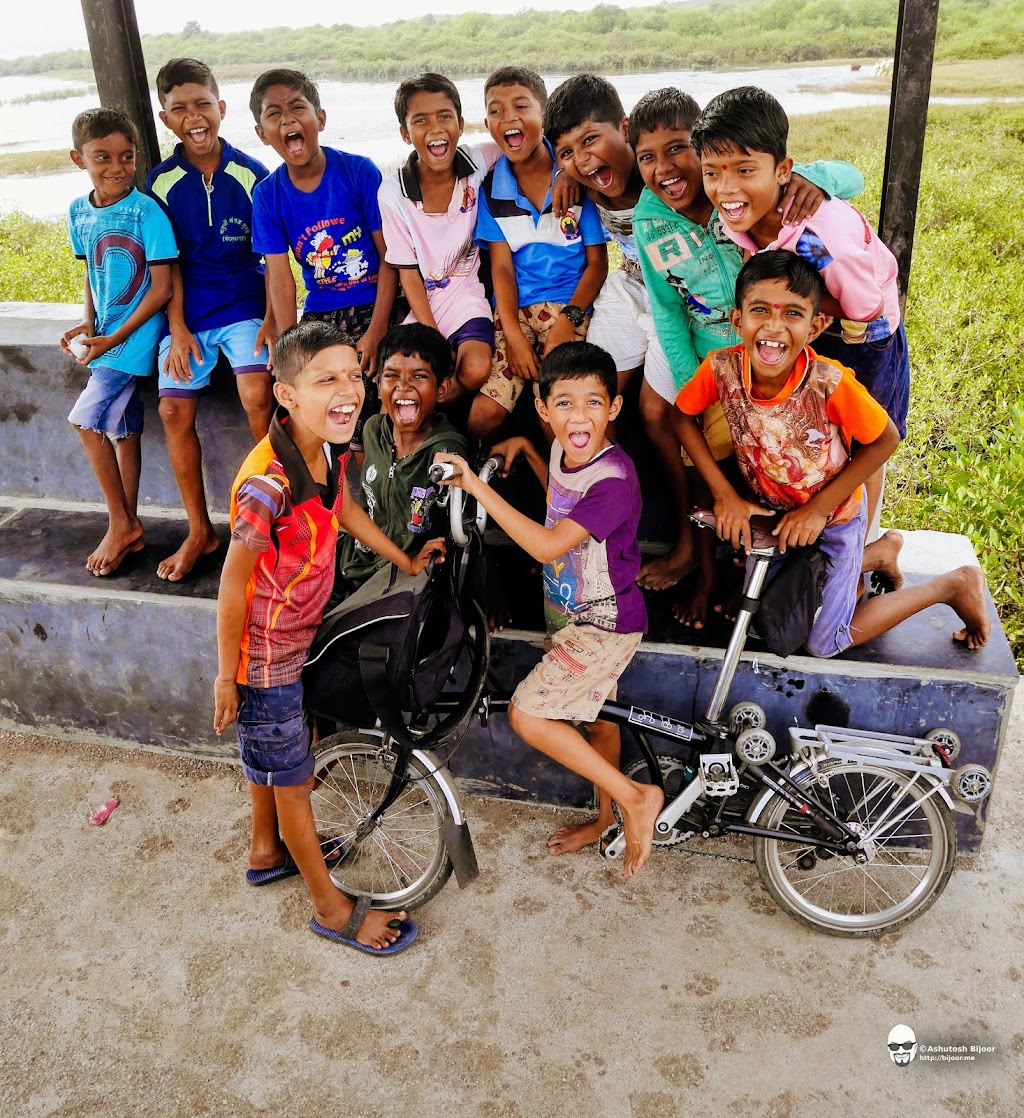 When we reached the Murbe, we were joined by a bunch of kids on their own bicycles who rode with us to the jetty. We had some fun with the kids and they were impressed by Piyush's demonstration the Brompton fold. 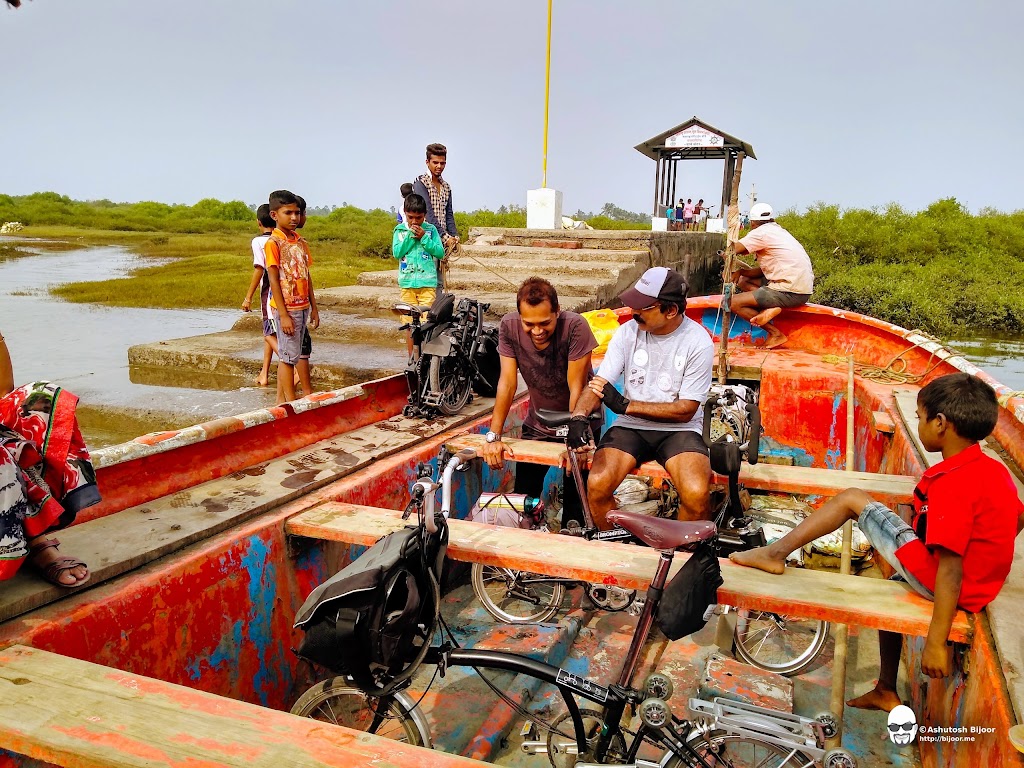 We loaded the bikes into the boat and went across to Satpati and rode without break on the road towards Mahim. 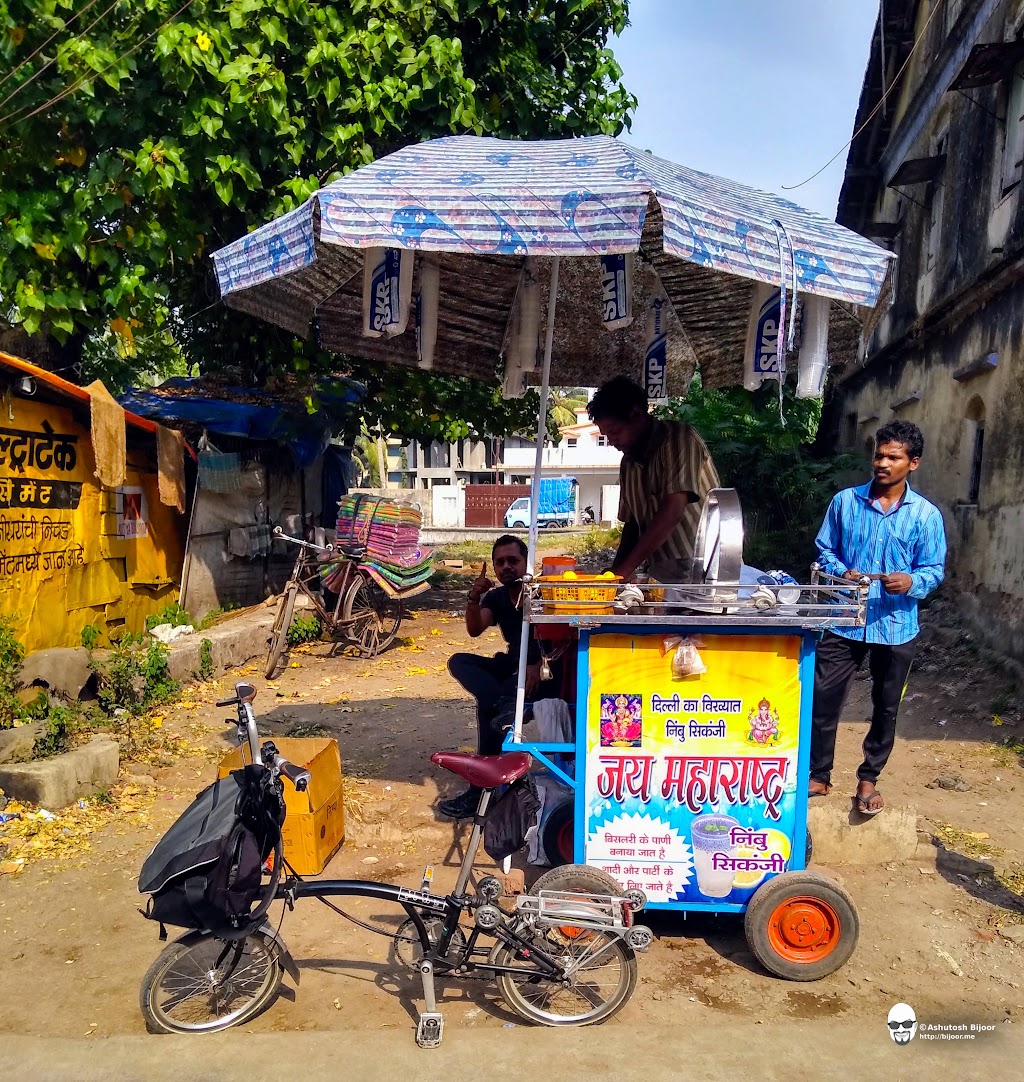 By the time we reached Mahim, we were famished and thirsty. Being a Sunday all the shops and restaurants seemed to be closed. The only relief we got was a roadside vendor of fresh-lime soda. The interesting signage on his cart claims that he makes the famous lime soda of Delhi, but the name of his business is "Jai Maharashtra"... full marks for being politically correct! 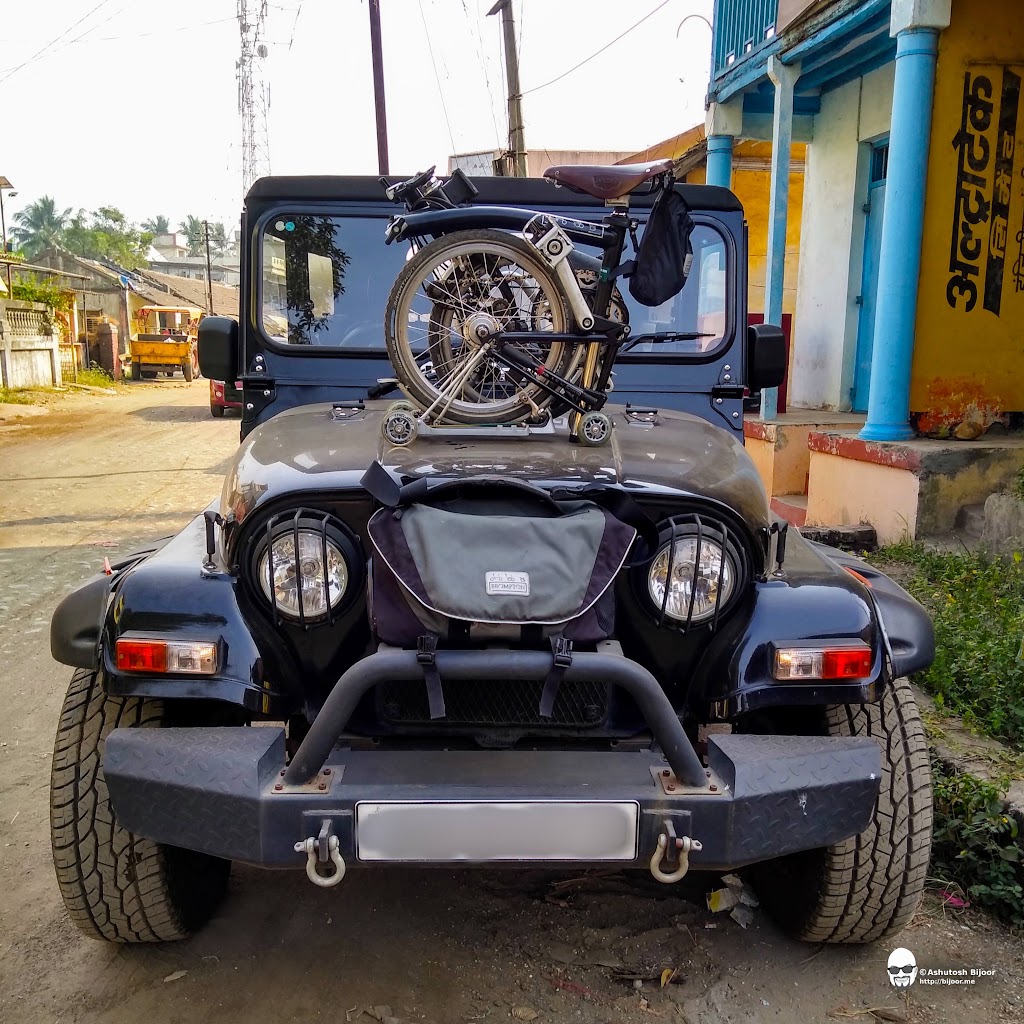 We reached back at Kelve where the jeep was parked, still famished and exhausted but thrilled at having completed the fun adventure! 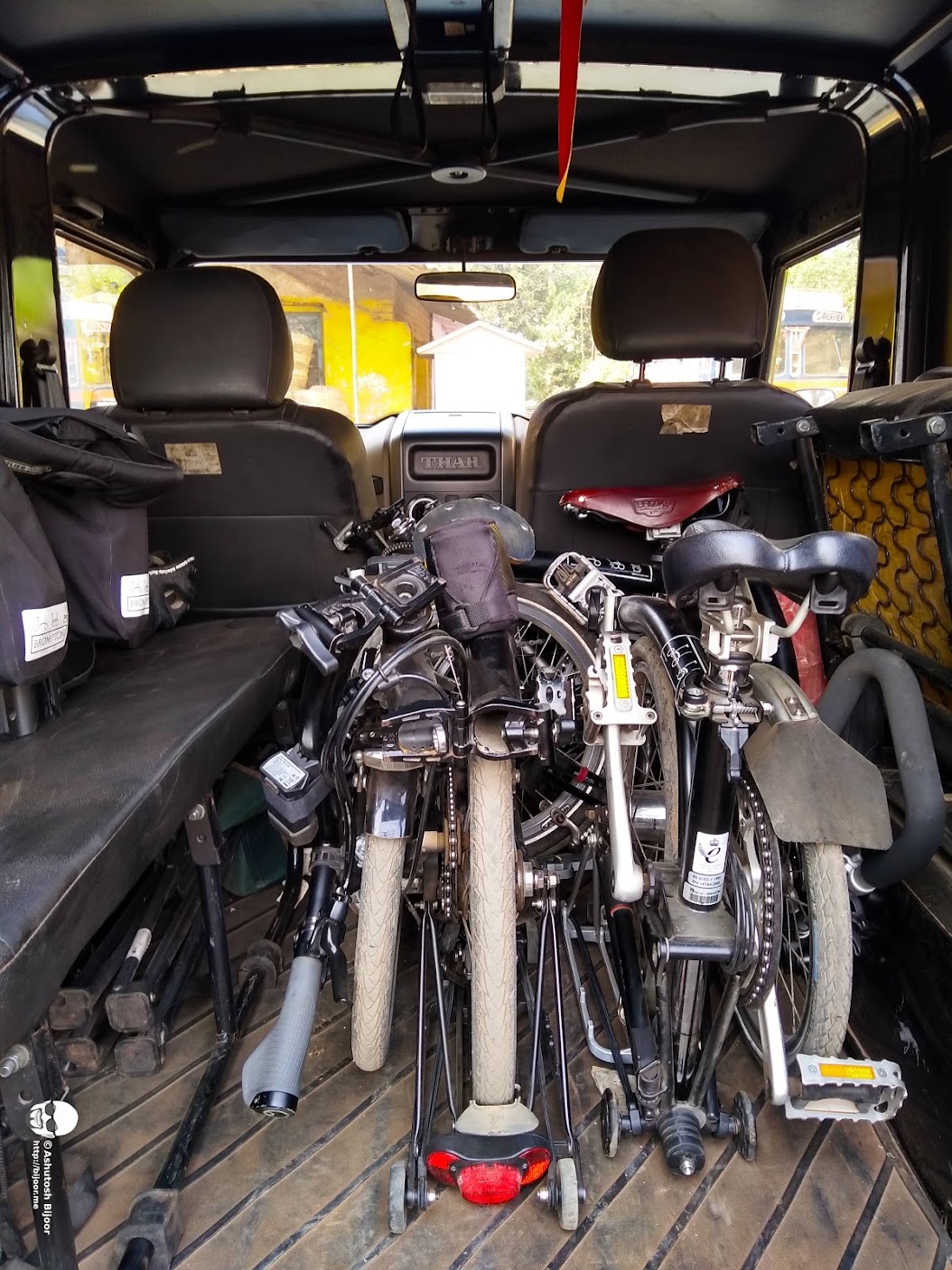 With the Bromptons neatly folded and loaded in the jeep, we headed back to Mumbai, with a halt at a restaurant on the highway to have a quick meal. When we hit the city border at the Vasai creek bridge, the traffic was really bad and our only respite was the interesting conversation and stories that Mahandra-ji was telling us of all his cycling adventures!

That marked the end of the Three Bromptoneers Ride, probably the first of a kind in India! 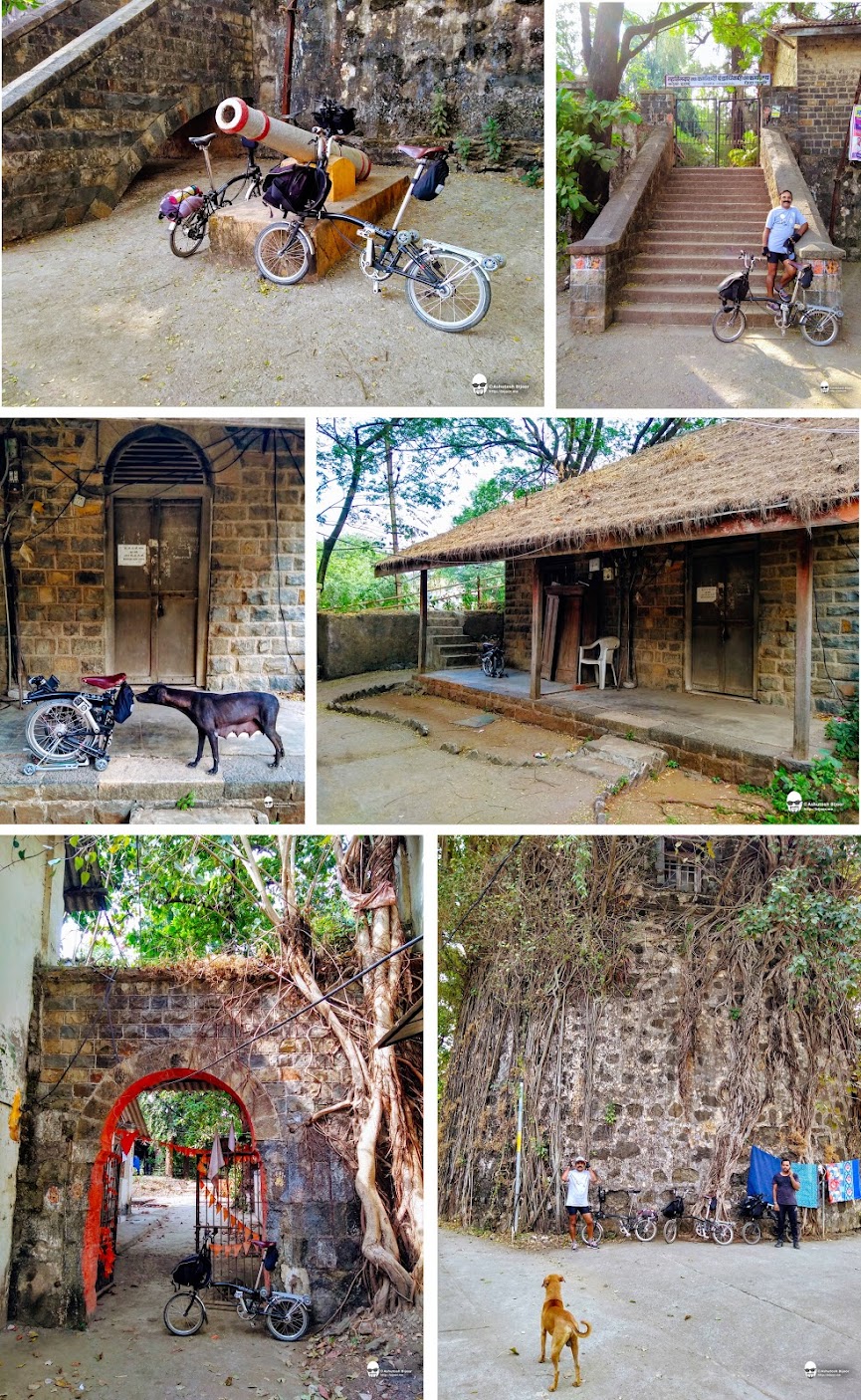 The fort on the north bank of the Dahanu river at a little distance from its mouth is of cut stone and well built.

In 1818 the works, which averaged about thirty feet high and ten feet thick, were in excellent order, defended by four casemated towers with ruined terraces. Most of the interior was occupied by old terraced buildings all out of repair. There was not a single habitable dwelling within the fort, and a well totally ruined yielded a scanty supply of water. The fort gateway which was very strong and in good repair was covered by a low round wall which stretched from tower to tower.

In 1862 it was described as a strong fortress overgrown with brushwood and with a ruined well.

The small port of Danu is located on the north bank of the bar of the river with the same name, about 50 km south of Daman. The pragana of Danu, a subdivision of Daman district, was occupied by the Portuguese in 1559. The main function of the coastal position was to defend the surrounding territory from predatory pirate attacks.

As such, in about 1635 it comprised a fortified house protected by a small wall, as well as a projecting bastion with some artillery pieces. Beyond the defensive structure, nearby was the Church of Our Lady of the Anguishes, attending to the village’s small resident Christian population. There are few references to Danu during the various conflicts with the Marathas from 1683 to 1739.

During the Maratha period the structure was remodelled, and the English found it as such in 1817. The current structure essentially dates to that phase, when it was used as a police barracks: a rectangular perimeter defended by four redoubts in its corners, with several dependent buildings and a well in its interior.

Read Next: The Three Bromptoneers Ride