In the third part of the Three Bromptoneers Ride, we rode from Mahim and Shirgaon to Satpati to cross over the Banganga River and head towards Tarapur Fort. After the fort, we rode ahead to Dahanu for a lunch break and a ride along Dahanu beach.

The above video is a quick tour of our ride from Satpati to Tarapur and further to Dahanu. 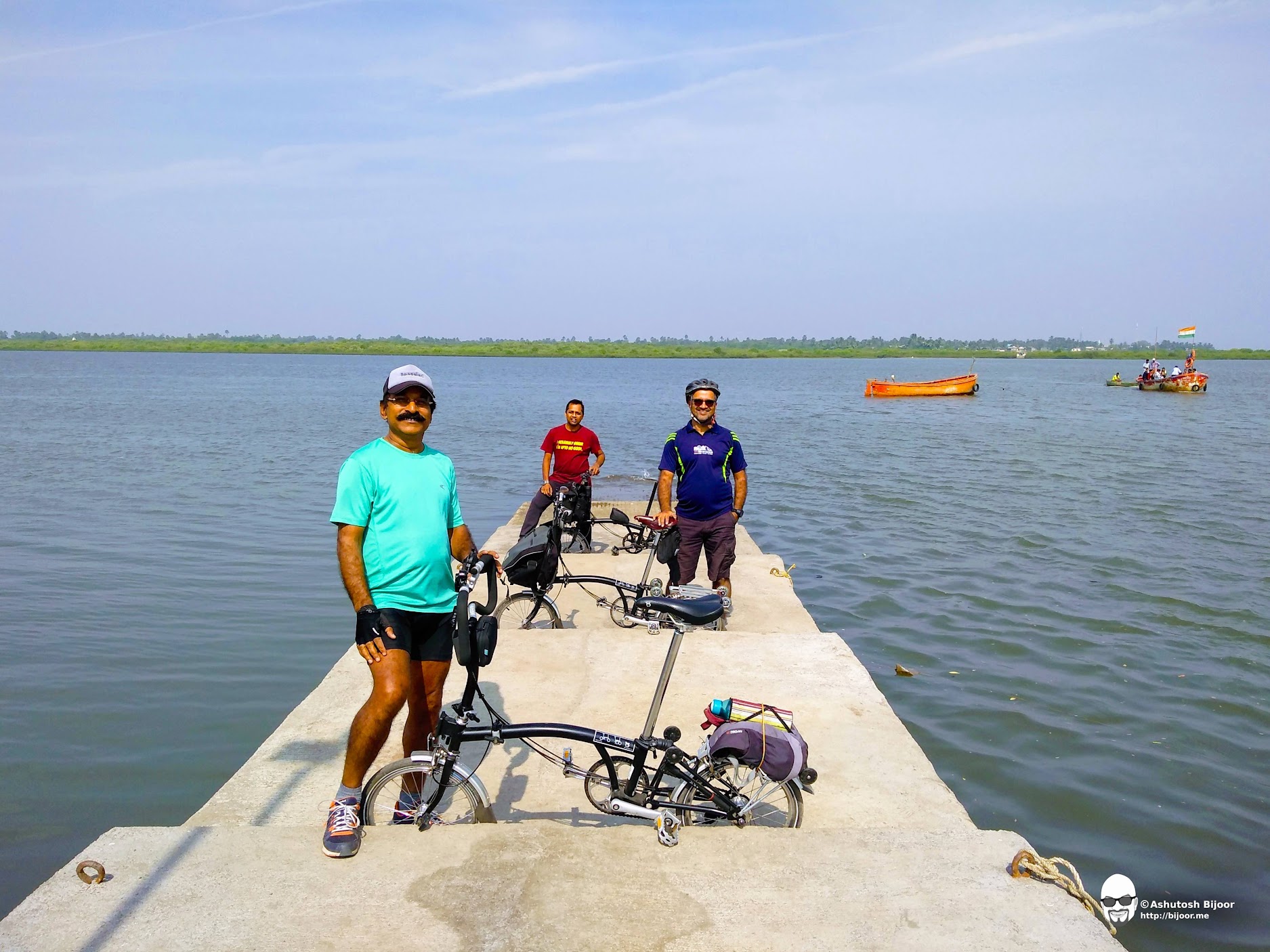 After Shirgaon Fort, we headed along the coast to Satpati on the banks of the Banganga river. Normal vehicular traffic has to go east further inland to cross the river over a bridge. However pedestrians and cyclists can take a boat that plies between the two shores at Satpati to cross over. 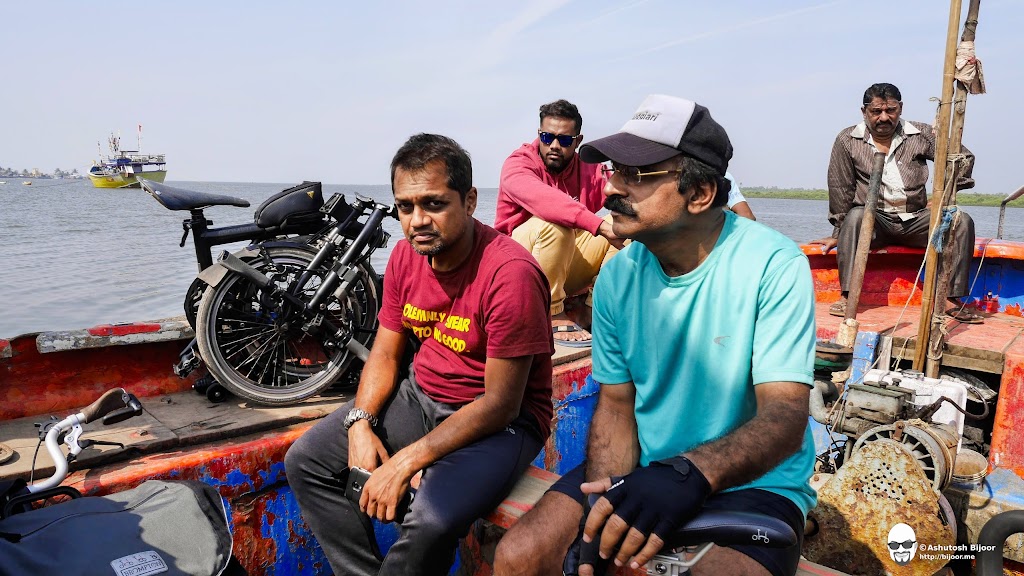 Our copassengers were the locals who were curious but reserved with us odd bunch of city dwellers with even more odd looking bicycles. A pleasant sea breeze cooled us down as we crossed over to Murbe. 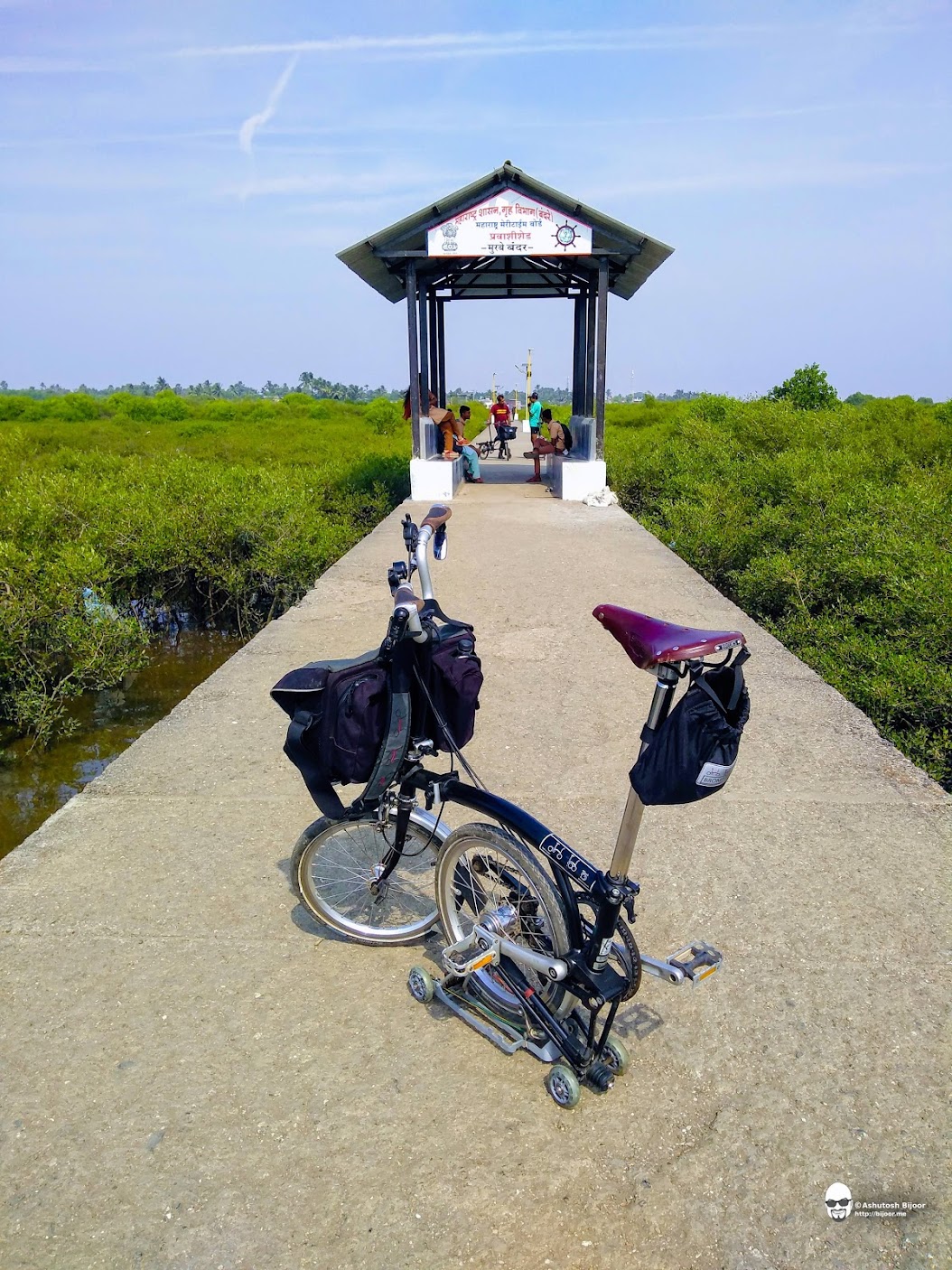 The jetty at Murbe extends to the banks of the Banganga river cutting through thick mangroves. The number of passengers were quite small, and we quickly got off and made our way towards Tarapur 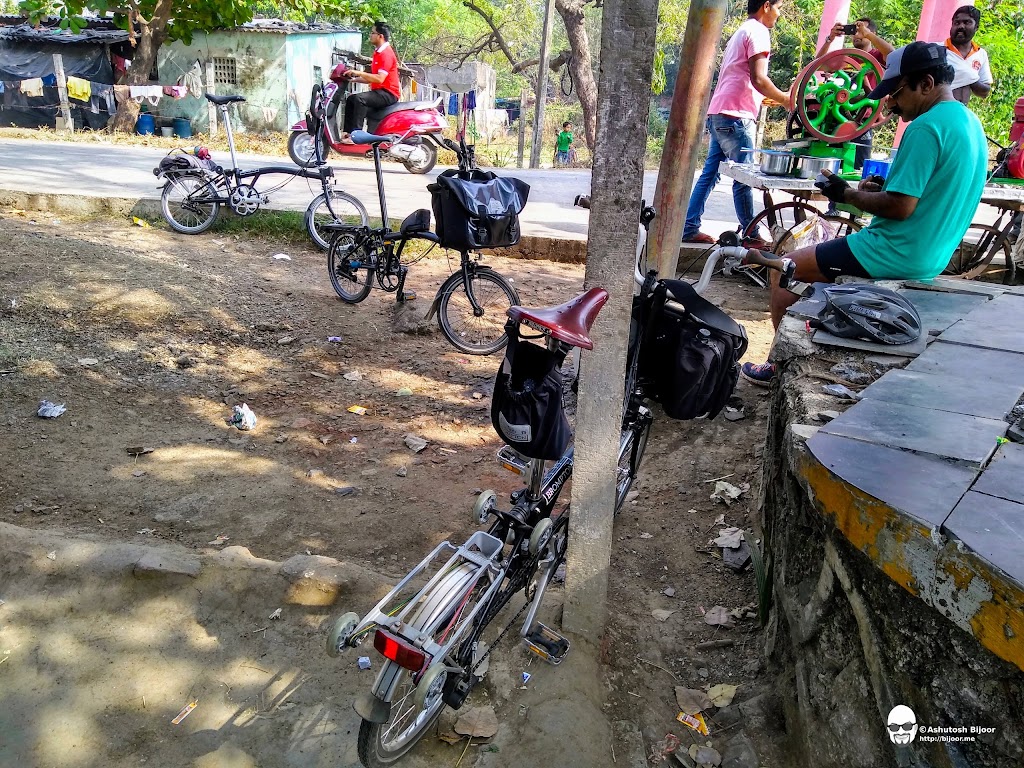 This was by far the worst section of the ride because we had to cross the industrial township of Boisar to avoid the Tarapur Atomic Power Station that lies along the coast and that is inaccessible to the public. We stopped to get a quick energy boost with a cool drink of sugarcane juice before riding ahead to Tarapur. Behind a barbed wire next to the road I saw these two kids as they tried to chase away something that was wriggling in the grass. 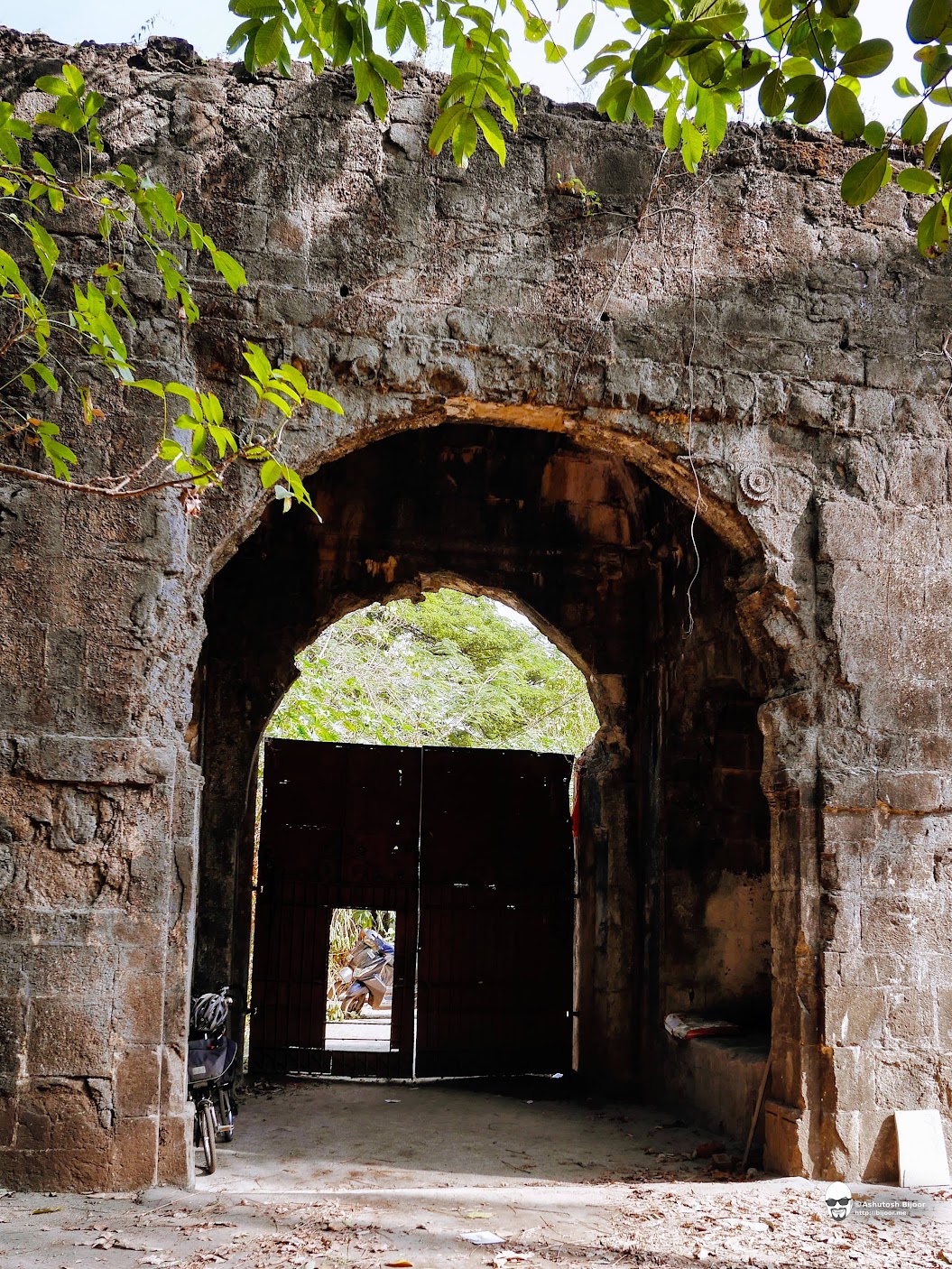 When we reached Tarapur, I headed straight towards a narrow road that leads up to the gate of the fort. The grounds inside the fort are privately owned and is locked. Visitors normally do not enter the fort. But I had visited the fort previously and knew the way to find the keys from the owner's house. 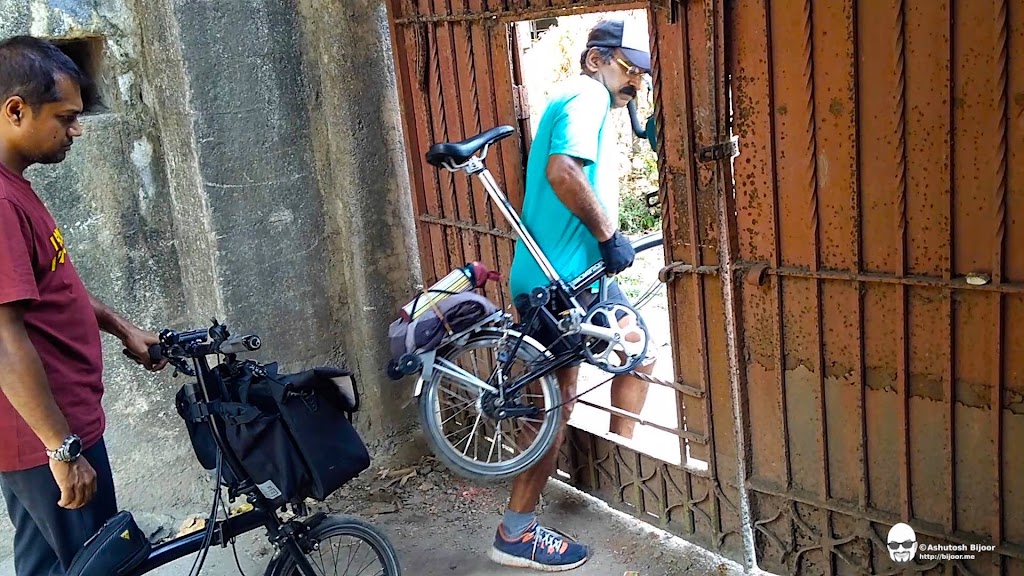 However I was told that the fort was already open, and so we entered in through the narrow opening in the iron gates. 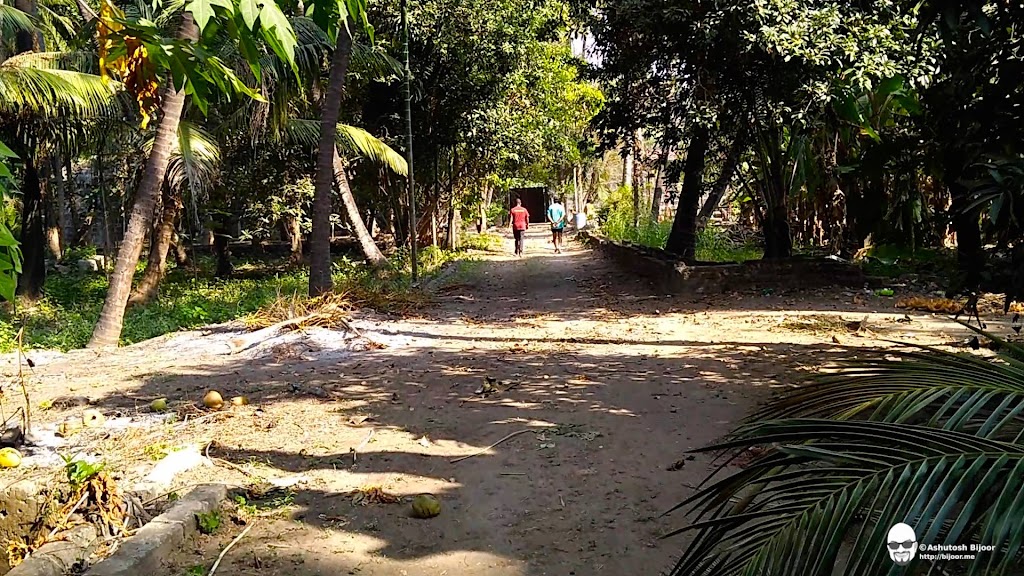 The grounds inside the fort have a well maintained orchard of coconut and mango trees. But I saw new construction of a school and some residential place that looked like rooms of a hotel. For all you know, the owners have figured out a more lucrative way to leverage this place. Hope it does not get disintegrated due to the usual unscrupulous crowds. 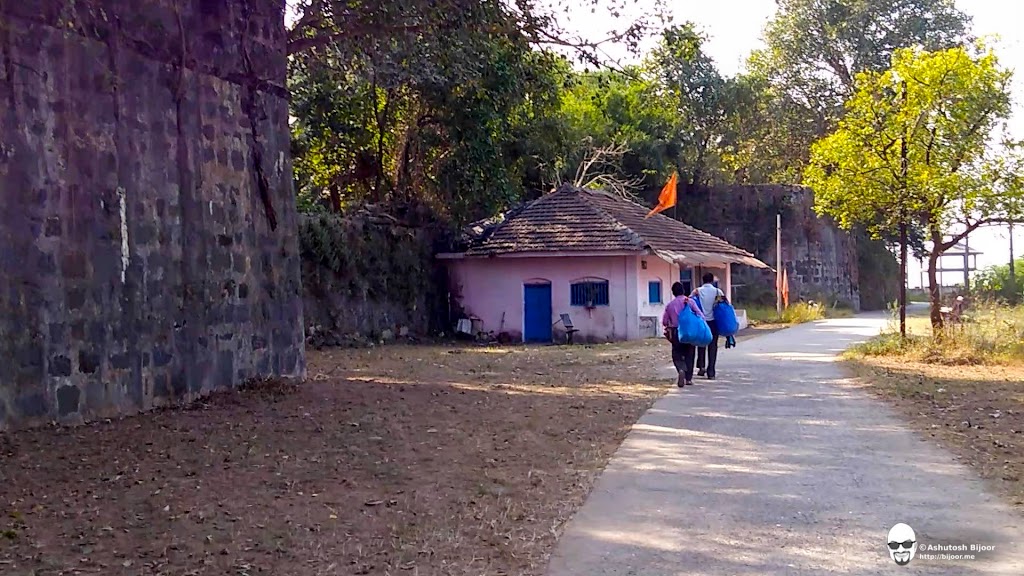 We explored the internal area of the fort and climbed up on the rampart to get a better look. We noticed the bastion at the north-west end of the fort, but to access it we had to exit the fort and go around the ramparts on the outside.

There is a stairway that leads up to the bastion from the northern face of the fort that faces the Tarapur creek. 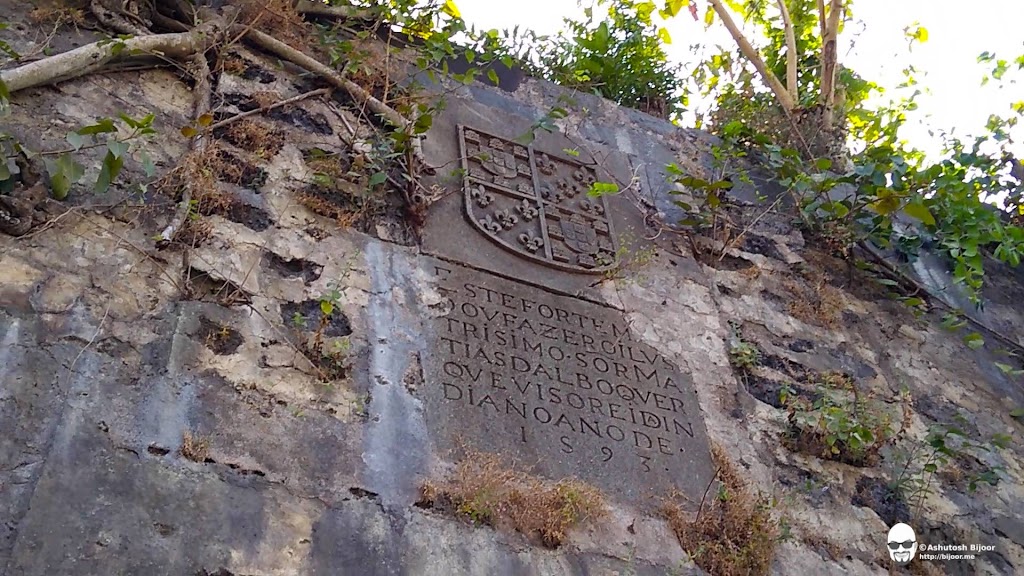 There is a plaque embedded in the ramparts to the right of the stairway that details out the history of the fort and reads thus:

This fort has been erected on order of the illustrious Sir Matias d'Alboquerque (Albuquerque), Viceroy of India in the year 1593 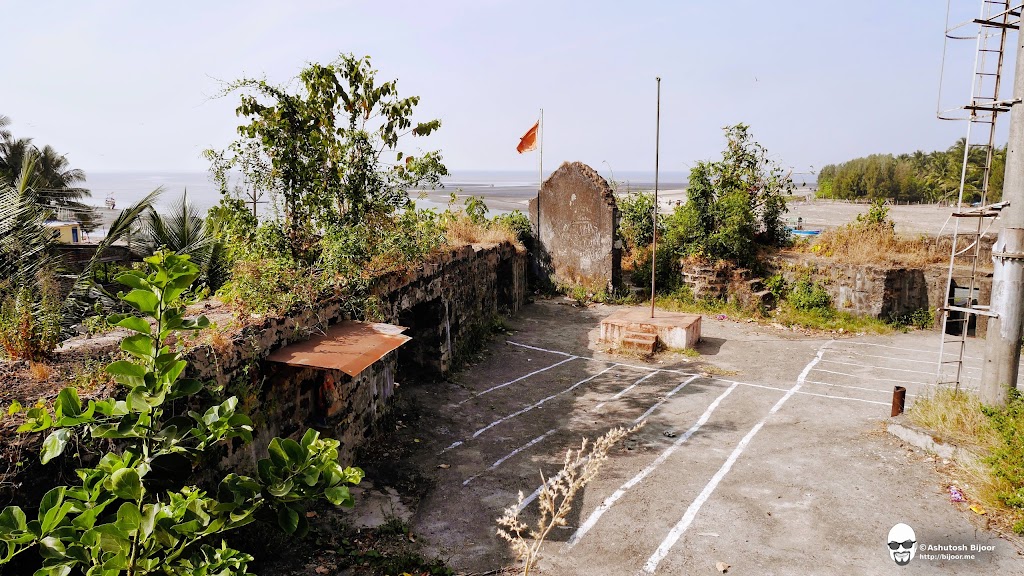 Climbing up the stairway leads to the bastion from where one can get a nice view of the Tarapur creek and the Chinchani beach across. 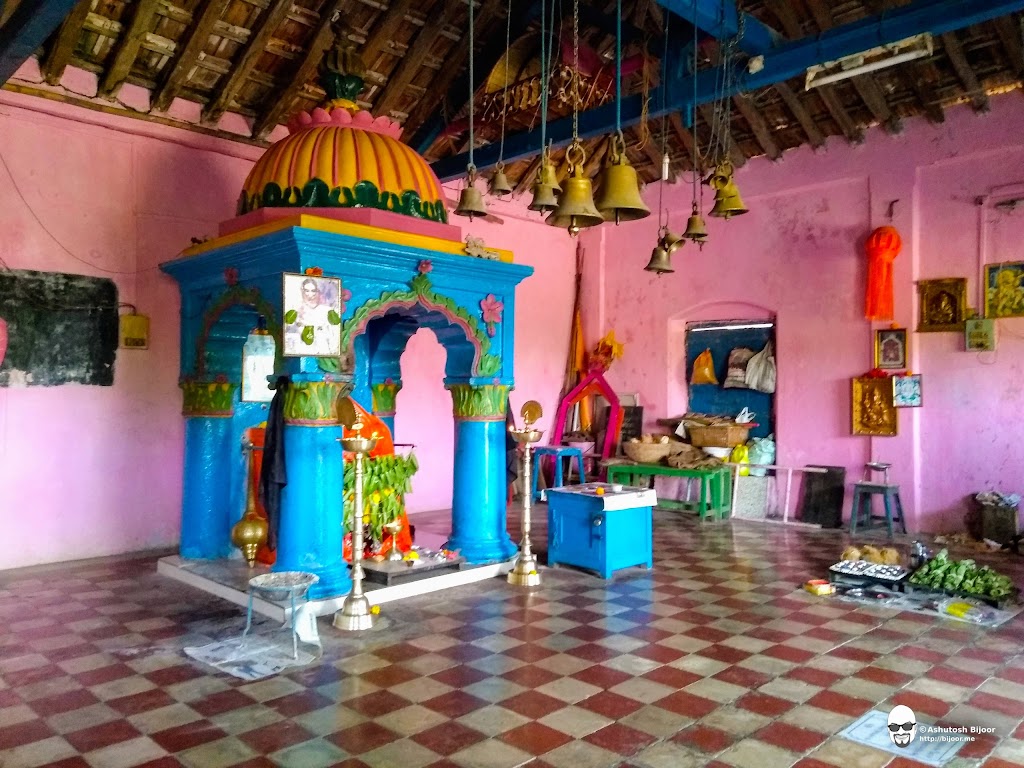 We also visited the temple that we had passed while going around the fort on the eastern face of the fort. It was unchanged from the last time I had visited almost three years back. 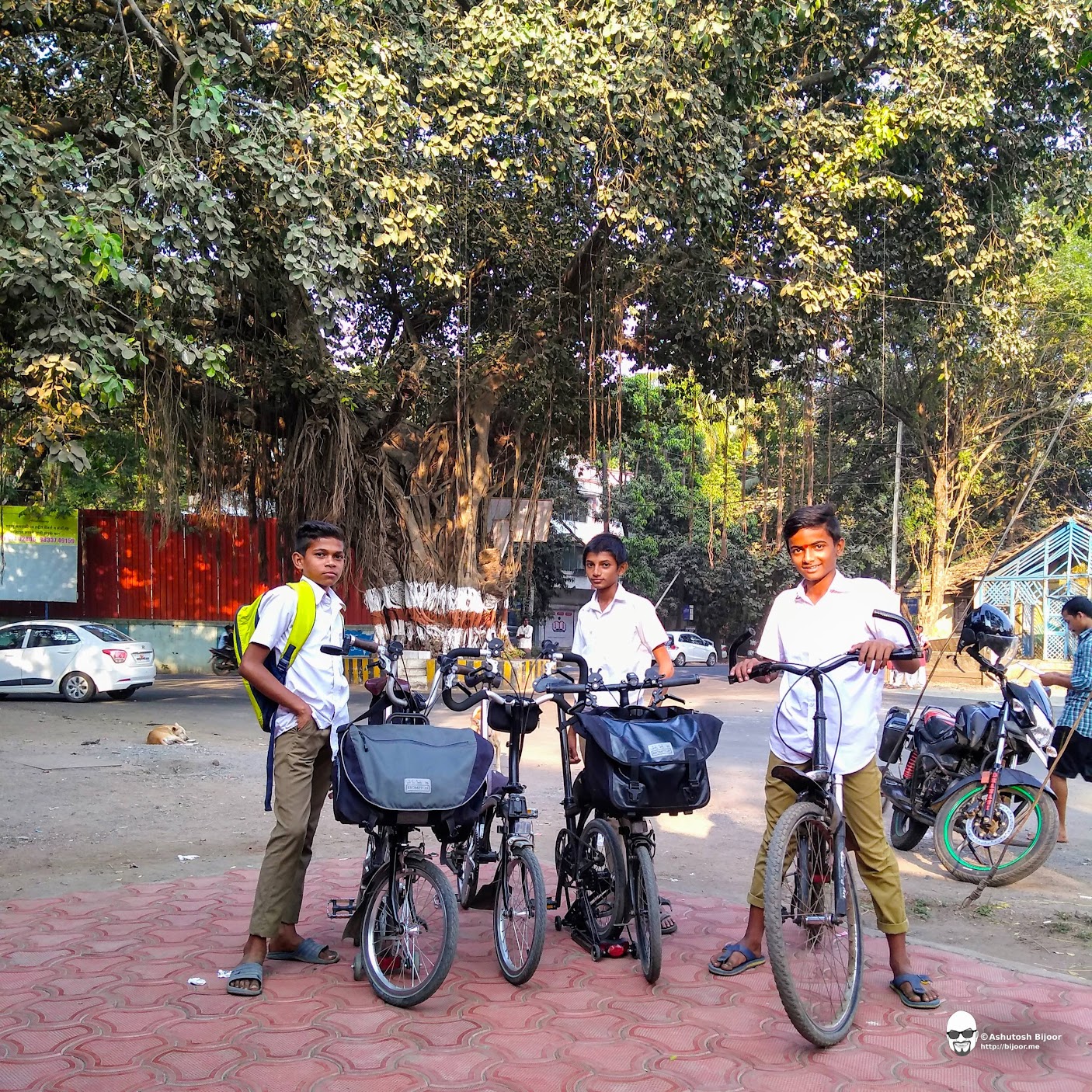 From Tarapur we followed the Chinchani-Dahanu road to reach the town of Dahanu. We were famished, and sat at a restaurant near this giant banyan tree in the middle of Parnaka square. Some kids who were returning from school stopped by to admire our bikes. 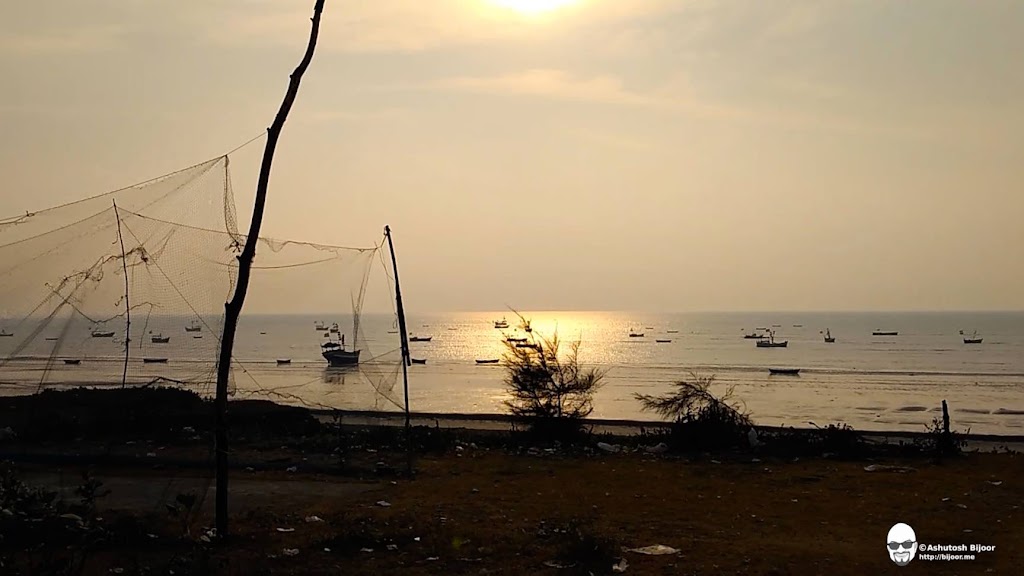 The last part of our journey was all along the beach, and we got a great view of the setting sun over the water, with fishing nets and boats resting for the day. 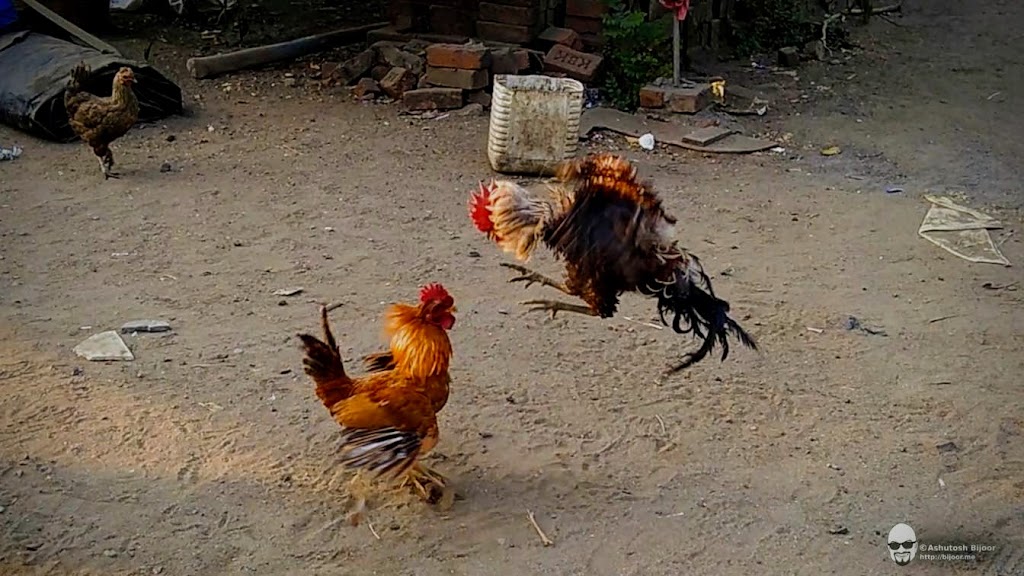 But the excitement was not over... we got to see a full scale cock fight on the road side. The hen that was probably the cause of this conflict was quite nonchalantly watching the fun from the sidelines.

We turned off the coast hugging road at Chikhale and headed towards Naralipada (also called Naraliwadi) towards Nest Farms, where we were to meet Rajeev Lamba - the fourth Bromptoneer and owner of the farm.

Read about our stay at Nest Farms here. 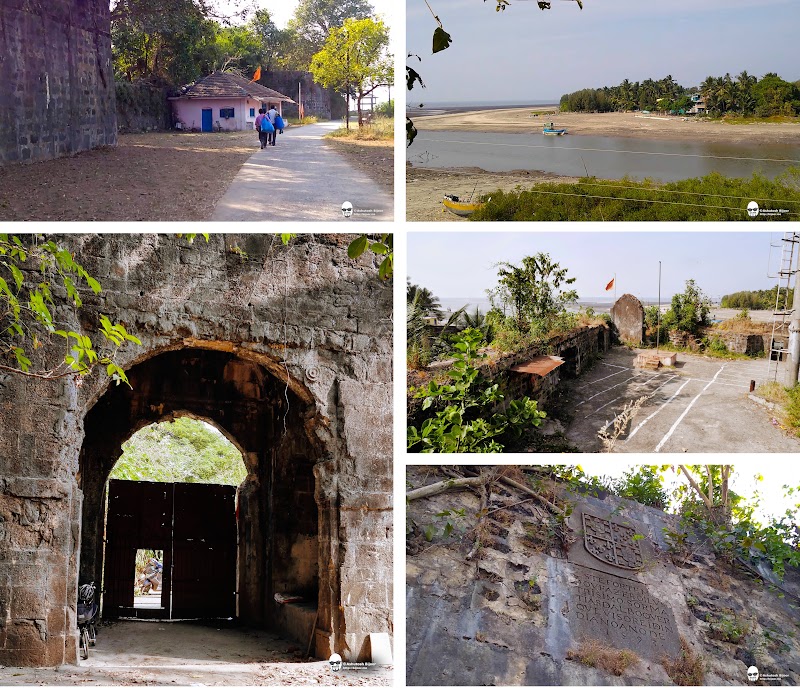 At the end of the thirteenth century (1280), Tarapur is mentioned as one of the towns conquered from the Naiks by Bhim the legendary ruler of Mahim in Bombay island. In 1533 it was burnt by the Portuguese. In 1556 the Portuguese possessions near Tarapur were greatly increased, and it was the head of the richest of the Daman districts. In 1559 an assault by some Abyssinian troops was successfully beaten off. In 1582, and again in 1612, the fort was unsuccessfully attacked by the Moghals.

The fort was surrounded by a wall with round bastions, and, besides quarters for the garrison, had a church, a Dominican monastery, and a hospital or misericordia.

The fort of Tarapur is located about 60 km south of Daman on the south bank of the bar of a small stream. It is the main entrepôt of the Tarapur pragana, one of the most productive areas of the Daman district occupied by the Portuguese from 1559 to 1739. As in other Província do Norte coastal areas, the Portuguese fortification resulted from a number of ad hoc interventions depending on successive threats and needs.

The Marathas in turn did considerable work on the defence perimeter, building walls on the south side which can be distinguished from the older stonework on the north side. The fort is currently private property; its interior contains a grove of coconut palms.

After the initial sack in 1531, the Portuguese occupied Tarapur pragana in 1559 and began establishing themselves in the settlement. They soon built a stockade which served as the captain’s residence. In the words of João de Barros in his Décadas da Ásia, it was “made of wild palms placed deep in the ground and very close together, lined inside with thick bamboo matting, with scaffolding and various bartizans”.

Based on this structure, Viceroy Matias de Albuquerque ordered in 1593 the construction of an artilleryequipped fortification made of lasting material able to effectively defend Tarapur. This initiative was also associated to the establishment of a mission of Dominican friars, followed by the arrival of other religious personnel. The structure was finished in 1595 and thenceforward served as the residence of Tarapur’s captain, who accumulated the position of rent-collector (tanadar). The name of the chronicler Diogo de Couto stands out on the list of captains.

Additional references to Tarapur Fort are found in the book "Notes on the History and Antiquities of Chaul and Bassein" by J. Gerson da Cunha[3] that has the following description:

“Tarâpur fortress, repaired by the Mahratis according to the European style, apart from the bastions in the middle which are partly round, partly square : altogether, four, guns on the bastions. The old side of the fortress watches Tchitchen, and the new one, (watches)the sea. At one hour and twenty five minutes (from there), the village of Tarâpur which church belongs to Dindou (Dhanu ?) one”.

Next: Stay at Nest Farms here.